The Lovings fought to legalize interracial marriage: a new film tells their story with quiet intelligence. 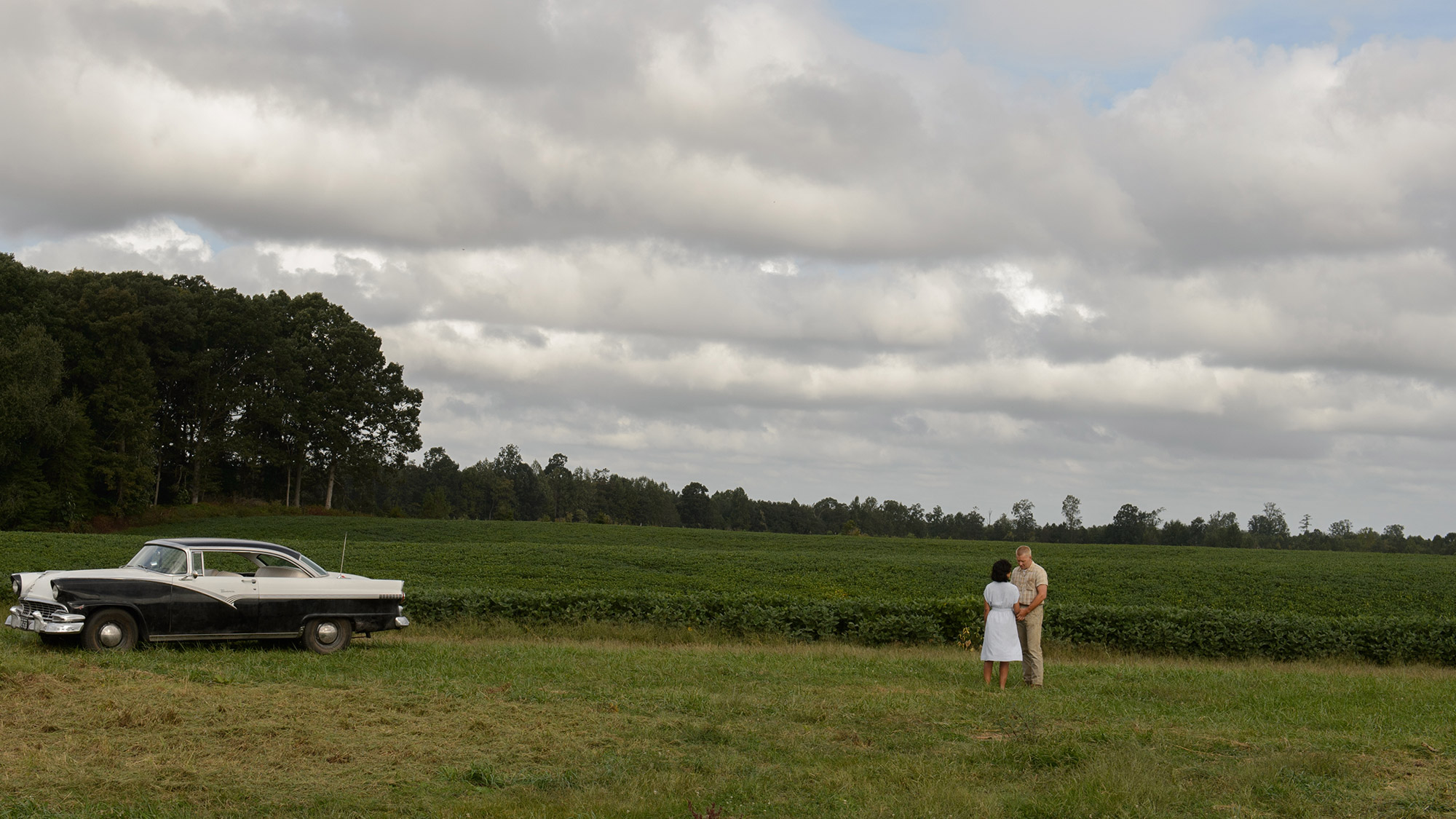 The more a movie matters the less words do. What cinema can and sometimes still manages to give us is a kind of live-action thinking, a canvas that reflects a director and screenwriter’s process of intellection without babble. A conscientious performer can bring a great deal of thought to a movie, too, thus becoming another valuable “auteur” within the process. But that’s rare. Few of today’s performers, let alone its stars, are hired for nuance but to play big, the better to fit into those plot points—car heists, derailed trains, a ticking time bomb—that characterize so many contemporary commercial flicks.

Yet there are moments when a film breaks free of those conventions and shows us what can happen in the quiet space of reflection. That’s what the thirty-eight-year-old writer and director Jeff Nichols achieves with his stars Ruth Negga and Joel Edgerton in his fifth feature, Loving, an aching poem of a film. Based on a true story, Loving begins not with words or disaster but soft night sounds: crickets, pond things croaking, slithering in pools in the dark. We’re in the natural world without quite knowing where. In the darkness, a face: Mildred (Negga), a woman of color with short black hair. She is seen in profile, and when she speaks it is with a Southern accent, and some hesitation. You can hear the blush in her voice when she says: “I’m pregnant.” There’s a pause, more silence, more night sounds. Then we see who she’s talking to: a young, white man with nearly white hair. He grins, revealing stained teeth and, around those teeth, lips that widen with happiness, love. “That’s good,” he says. He has a Southern accent, too. 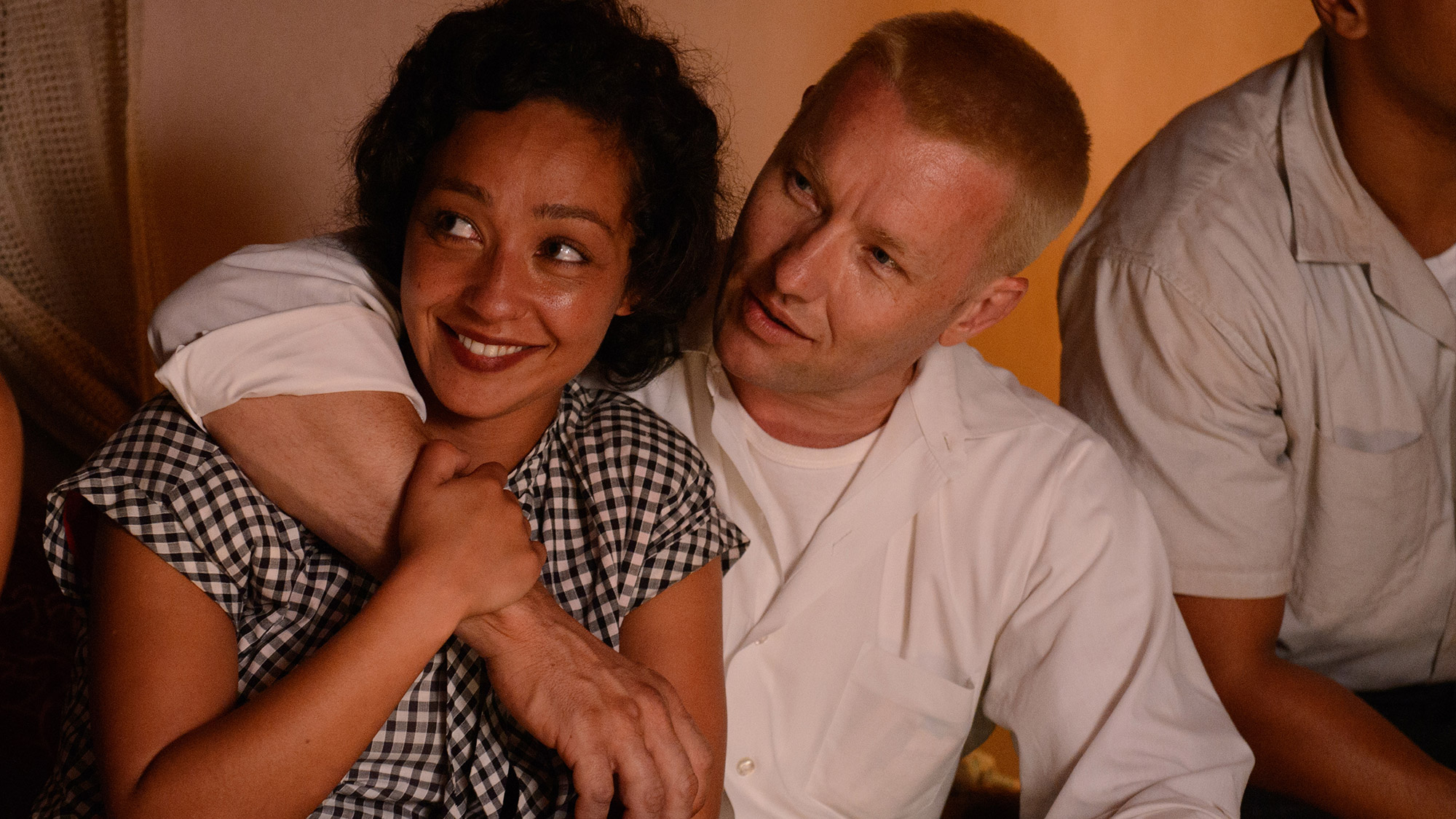 The man who’s speaking is Richard—Richard Loving (Edgerton). The baby will make the couple a family. We’re only a few minutes into the film but already we’re in a different kind of cinematic territory. Generally, when an American film centers on a mixed-race couple, the relationship is framed as a problem, not portrayed through vulnerability or the shyness that comes with love. Nichols doesn’t distract us from this moment—or any moment of intimacy—with elaborate camera movements that are meant to show how much he knows about filmmaking; he’s canny enough to realize that his film is in his actors’ faces, and their ability to write the story with their bodies. Indeed, Nichols’s trust in his actors frees them to think in their roles, and it’s what they consider and how they consider it that draws us in, and helps tell us who they are.

Like Richard, Mildred grew up in Central Point, Virginia, a small rural community not terribly far from Eisenhower’s Washington, DC, but still a world away. In Central Point blacks and whites and Native Americans lived together, sometimes farming, generally getting by. Despite Jim Crow, racial tensions were rare in that Virginia town. In 1958 Richard and Mildred went up to Washington to get married; they couldn’t wed in Virginia, where the Racial Integrity Act of 1924 was in full effect. That law was a holdover from slavery: miscegenation might create a collective “other” body that would overwhelm the white ruling class. So there were laws against it. The history of the bad, slavery times was thick in the South; it weighed the trees down just as lynched bodies had once weighed the trees down. The racism that filled Richard and Mildred’s native land with so much bile was largely unknown to the young lovers until it changed their lives. 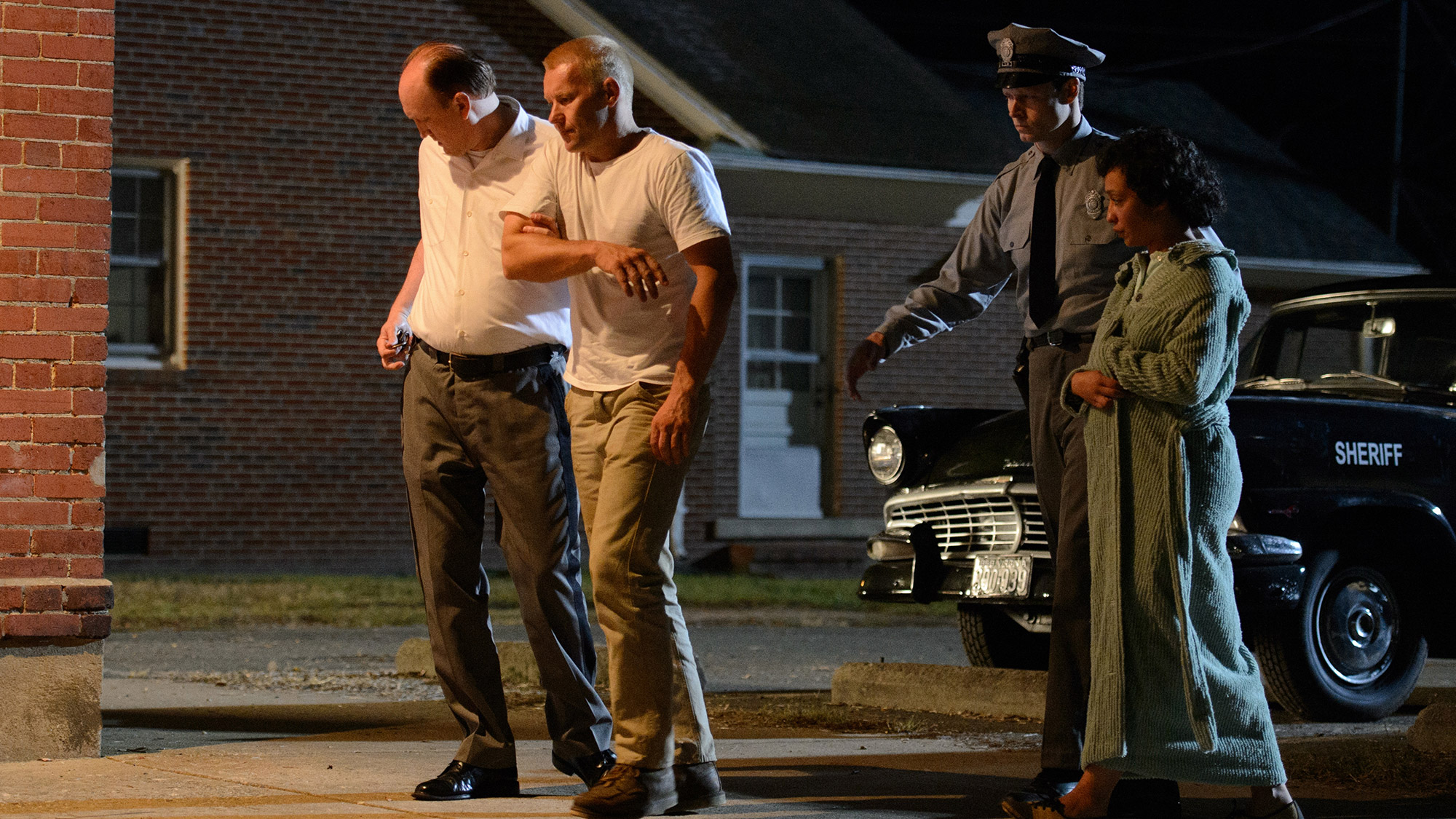 Five weeks after their marriage, the Lovings were arrested in their home. Eventually the couple pled guilty to violating the Virginia anti-miscegenation laws and their sentence was suspended, but the couple had to pay for their “freedom”: they could not return to Virginia for twenty-five years. Moving on, the Lovings settled in Washington, DC. Their family was growing. (In the end they had three children.) But Mildred did not like the city. She wanted her offspring to grow up in the world she had known as a child, and as a young woman—a world filled with natural night sounds, and space. In the film, Negga shows Mildred’s mind working against the limitations of her situation, and her family’s, through her eyes and her ability to be still as she crosses her arms across her chest, or crosses her legs as she observes a world where she and her husband and children are targets. Negga doesn’t so much “react” to what her scene partner says as absorbs it, along with the atmosphere; she’s a relaxed performer, one who lets her body be transformed by words, or a look, or gesture. A large part of the film’s radicalism is that Negga doesn’t play Mildred as “different.” That is, she doesn’t rely on those old Hollywood tropes—strong black woman, sassy black woman, disgruntled black woman—to manufacture a character. Instead, Negga’s Mildred is an individual who is natural to herself. She is not self-conscious but conscious of love, and injustice.

About halfway through the film Mildred writes to Attorney General Robert Kennedy pleading her case; she would like to return to Central Point, she says, to her home. Kennedy writes back, referring the determined woman to a couple of lawyers from the American Civil Liberties Union who eventually take Loving v. Virginia to the Supreme Court, where, on June 12, 1967, the high court agreed in favor of the Lovings, thus ending the ban on interracial marriages across the country. Nichols and his actors don’t exploit the moment as a triumph, just as they don’t exploit their characters’ hardship as tragedy. Life doesn’t know it’s becoming history as it happens. It’s just life.

And it’s the relative tranquility that can sometimes shape life that we listen to, along with wind rustling the leaves in the trees and the grass, while Richard starts to build a family home, brick by brick. As he goes about it, Mildred looks on, filled with the day to day of her life, and her family’s. We watch her eyes because she has been the moral barometer of the film all along, the active presence who has labored for good during her young life. Mildred died in 2008, and Richard thirty-three years before. He was killed by a drunk driver who didn’t know what Richard was forced to leave behind when he died: his wife’s humility, the hard and joyful work of having made a family the world said was wrong—a wrong Mildred turned back on the world. The Lovings didn’t talk much, but what they did say and represent changed America, the country that had made them. Given recent events, one can imagine how little their love might mean in this America, if it will be allowed to matter at all. 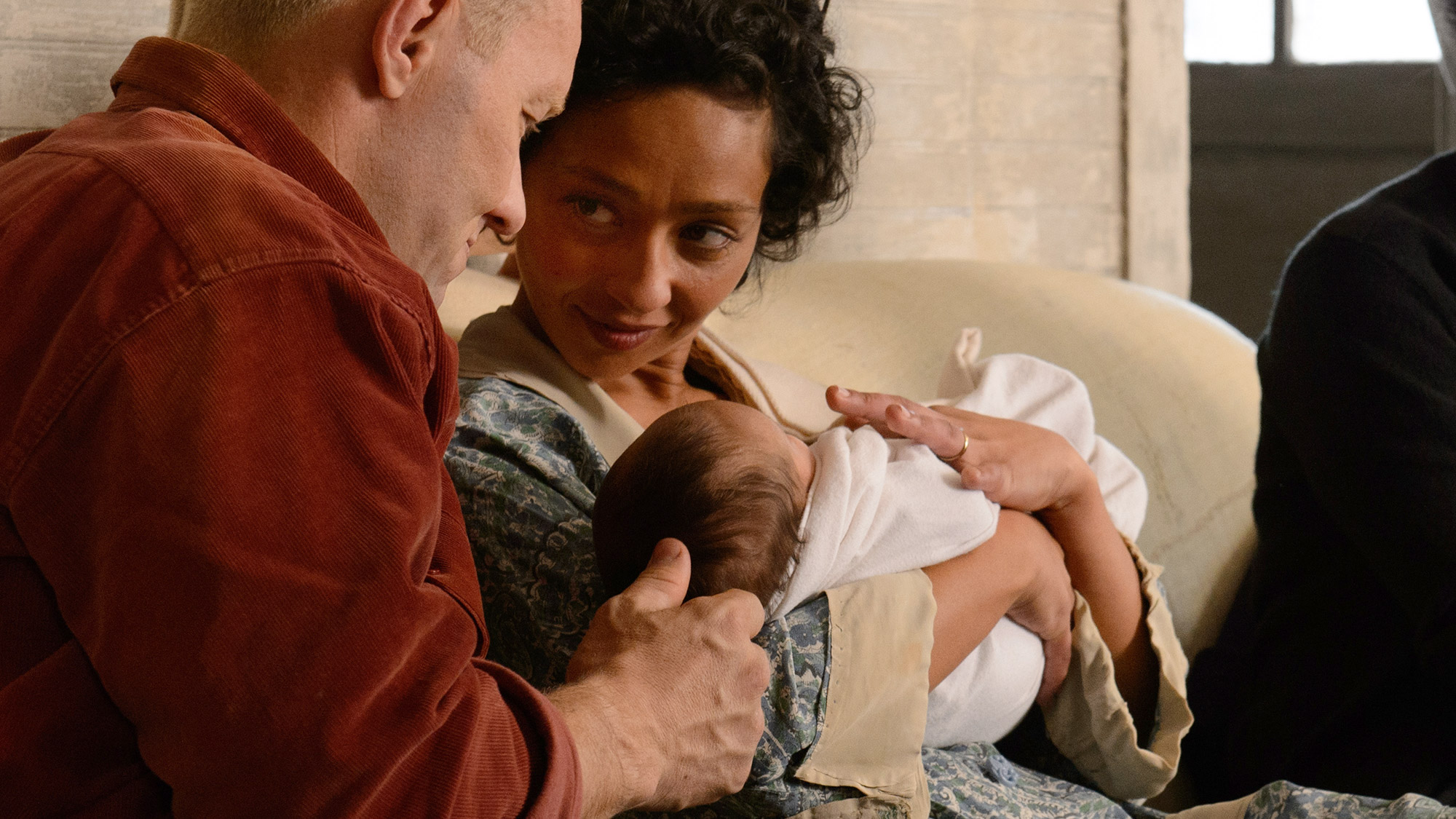 Hilton Als is a staff writer for The New Yorker magazine. He is the author of White Girls and is the co-author of Robert Gober: The Heart Is Not a Metaphor.