Sound plays a lead role in the Swiss artist’s immersive installations at the New Museum. 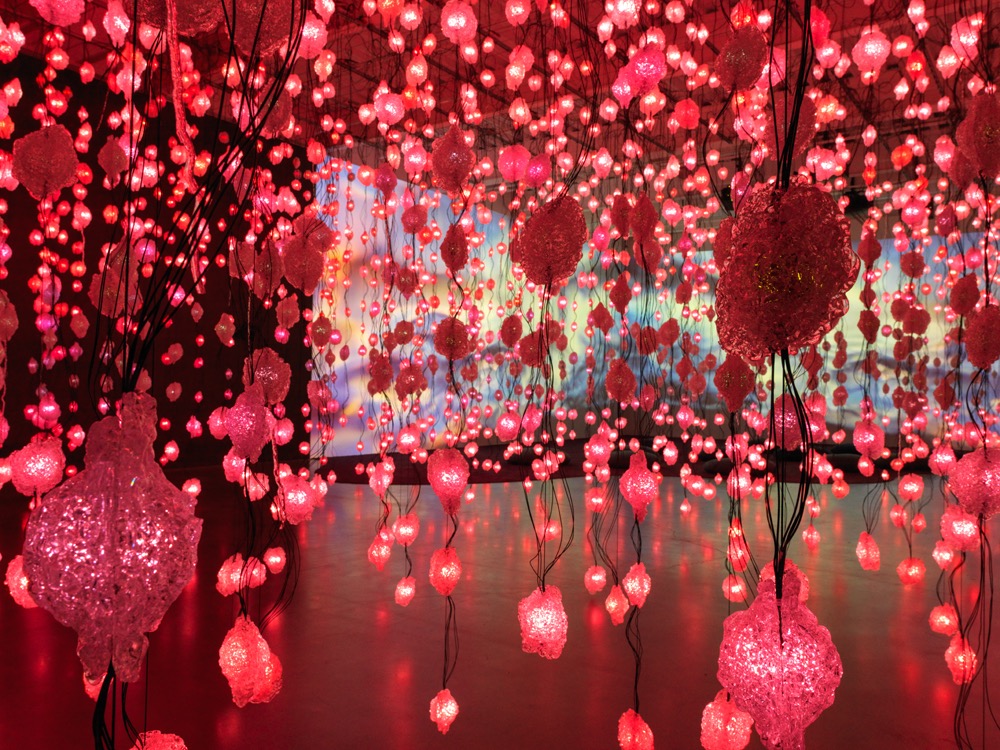 Brian Eno first conceived of his ideas about ambient music in 1975, while lying horizontally.

And immersion was really the point: we were making music to swim in, to float in, to get lost inside.

This became clear to me when I was confined to bed, immobilized by an accident in early 1975. My friend Judy Nylon had visited, and brought with her a record of 17th-century harp music . . . It was raining hard outside, and I could hardly hear the music above the rain—just the loudest notes, like little crystals, sonic icebergs rising out of the storm. I couldn’t get up and change it, so I just lay there waiting for my next visitor to come and sort it out, and gradually I was seduced by this listening experience.

In Pipilotti Rist’s 4th Floor to Mildness, on view at the New Museum as part of Pixel Forest, a striking survey of her work, viewers are invited to lie down on a sea of beds and gaze skywards. “This is my favorite watching situation,” she told Artforum recently. Viewers, she says, “perceive differently looking upwards, if gravity is not to be fought.” In Rist’s captivating environments, we are asked to drop our guard, to be immersed in a dream state. On the ceiling, on two curved screens, scenes of the Rhine River are interspersed with close-ups of bodies and dirt. Ambient sounds of burbling water slowly give way to a melancholy acoustic ballad by twenty-six-year-old Anja Plaschg, also known as Soap&Skin. 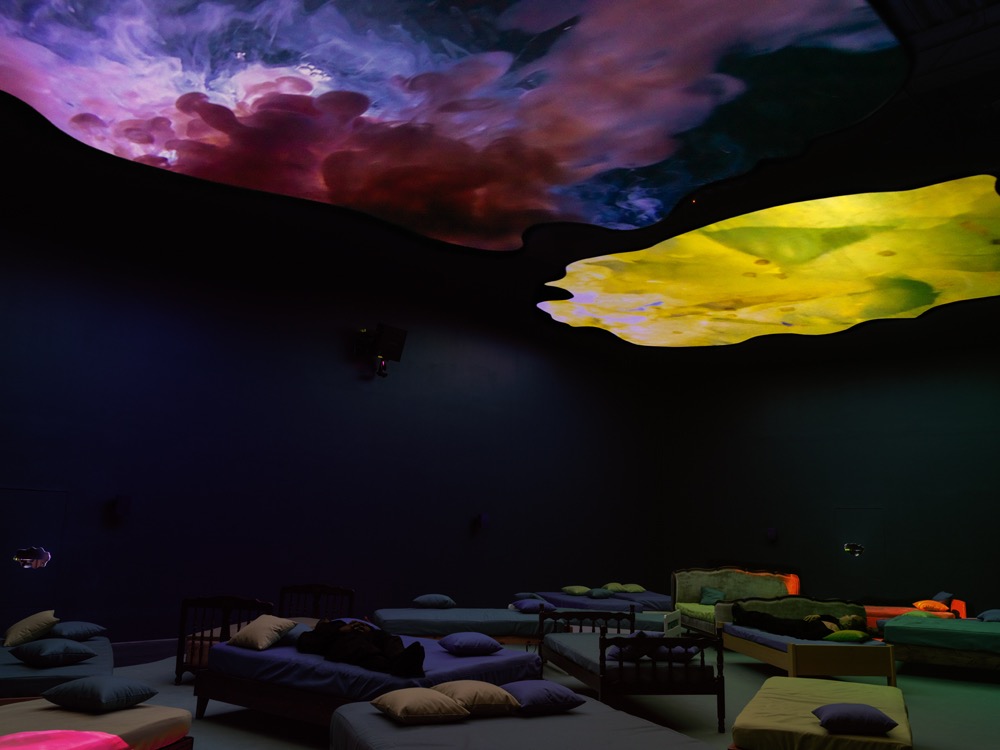 Ambient sound—and music—figure heavily in Rist’s lush environments, and nearly all of the works on display at the New Museum have a meaningful sonic component. The music in Rist’s works is often created in collaboration with the artist Anders Guggisberg. “Music is not his main practice, which makes his music kind of fearless and not polished,” Rist has said.

Rist’s alliance with music is longstanding, going back to her childhood. Growing up in Switzerland, her mother often invited touring bands to stay at her house; Rist met vital post-punk groups like the Television Personalities in her living room. She later became a musician herself, playing in the band Les Reines Prochaines. Her raw early single-channel works seem to reference the tropes of music videos, while garbling them, spitting them out and refashioning them into something else entirely. She has said that her first video, I’m Not the Girl Who Misses Much (1986), was made before she ever saw MTV, but she didn’t need to. Her intuition for music—and how it could merge with video—was strong, even then. 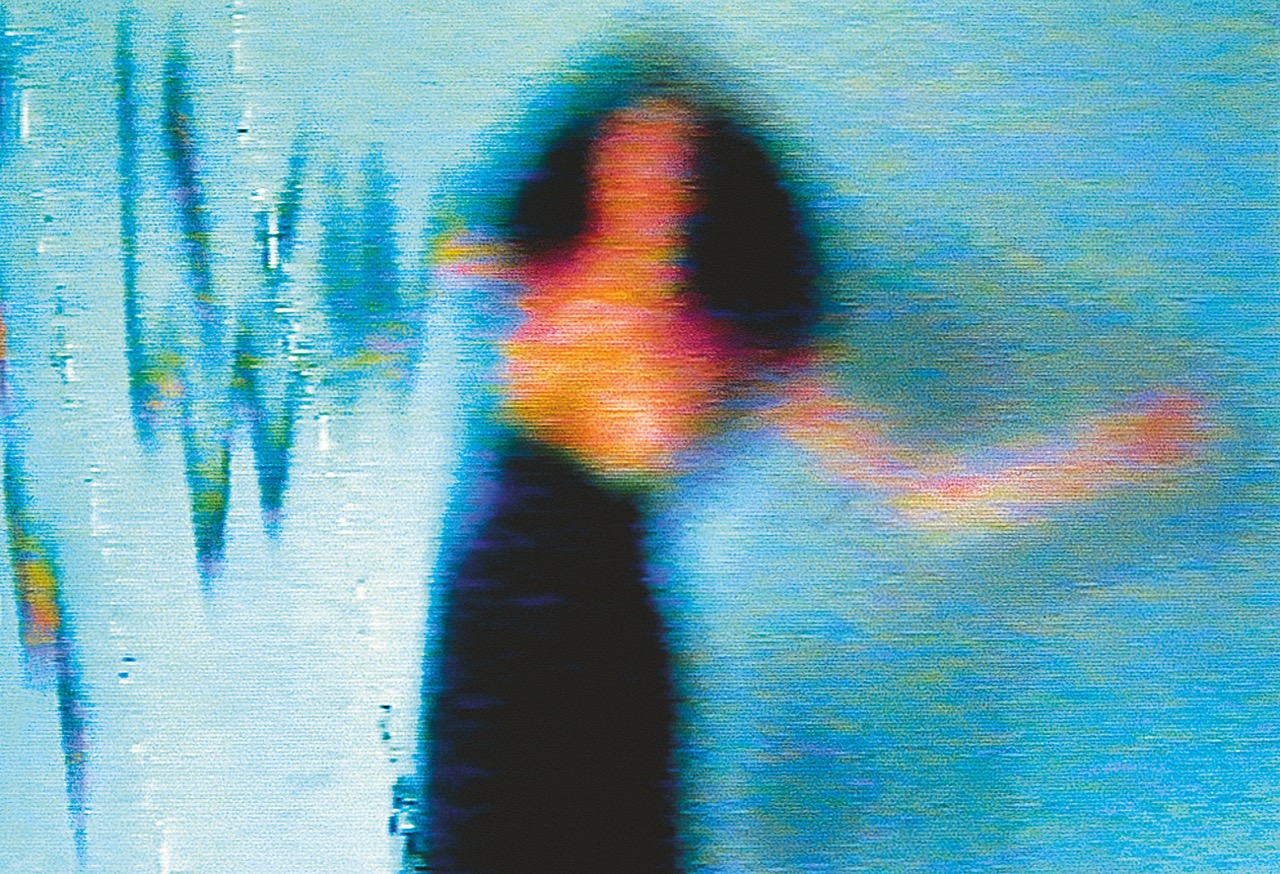 Pipilotti Rist, I’m Not the Girl Who Misses Much, 1986 (still). Single-channel video, sound, color. Sound by Rist after “Happiness Is A Warm Gun” (1968) by John Lennon and Paul McCartney. Image courtesy the New Museum.

Pixel Forest tracks Rist’s progression from her more overtly confrontational early work, in stark videos that put herself front and center, like I’m Not the Girl Who Misses Much and You Called Me Jacky (1990), to the massive, enveloping environments she creates today. On the third floor of the New Museum, the hard glare of thousands of LEDs is softened by hazy crystalline enclosures in slowly shifting colors. A wander through this dense forest of twinkling pixels leads to another immersive environment, Worry Will Vanish Horizon (2014). Soft pillows are piled on carpet in front of two giant screens. Almost unbearably intimate footage is splashed across them—a journey, it seems, through arterial blood valves. Disorienting close-ups of body parts are interleaved with rolling green landscapes. Dirt-crusted fingers run across rough-textured plants and wildflowers, making one keenly aware of tactile sensations. Bird sounds slowly give way to plangent acoustic guitar.

On the second floor, in a corner, the video installation Sip My Ocean (1996) alternates with Ever Is Over All (1997). Compared to the massive environments upstairs, these screens feel small, but the power of these pieces is huge. Sip My Ocean fills up the whole floor with sound, as the misty guitar lines of Chris Isaak’s “Wicked Game” reverberate through the room. The song is almost insufferably schmaltzy, but Rist’s cover—which begins with her softly singing in a flat, Swiss-accented voice and nearly howling by the end—feels fresh and strange. Sip My Ocean and I’m a Victim of This Song (1995), which both use the same soundtrack, are some of Rist’s best-known works, and much has been made of how Rist covers well-known pop songs and makes them her own. (Rist’s appropriation of pop music is so intuitive that perhaps it’s not surprising that pop music ended up appropriating Rist, coming full circle, as Beyoncé did with Ever Is Over All. Her video for “Hold Up” was an uncanny homage to Rist, right down to the smashing of car windows.) Sip My Ocean partly derives its power from the way Rist sings the lyrics of the original song, transforming it, but also from how the sound of the song itself meshes with her dreamy visuals: the watery guitar textures, the tremolo and delay, and the reverb—the way the notes hang in mid-air. 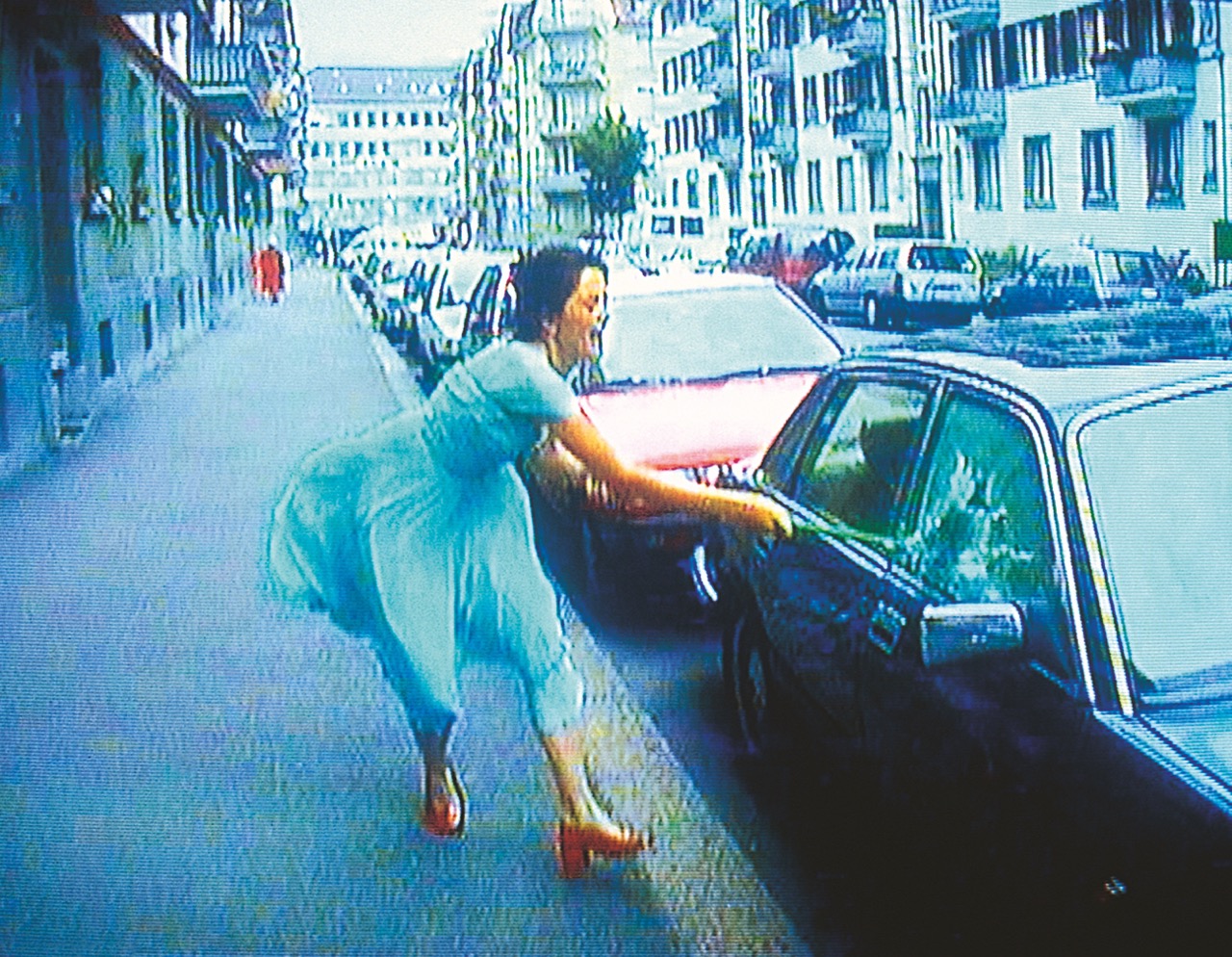 Pipilotti Rist, Ever Is Over All, 1997 (still). 2-channel video and sound installation, color, with carpet. Dimensions variable. Sound by Anders Guggisberg and Rist. Image courtesy the New Museum.

In Rist’s environments, we see flashes of a world that is both hazy and ultra-vivid. Like our dreams, they rush toward us as fast as they disappear from memory. “For me, video has a very painterly quality, especially the standard definition like this,” Rist said in a Louisiana Channel interview, while talking about Ever Is Over All. “You see, if you concentrate on the color noise, it looks like aquarelle, it looks very un-sharp, but on the other side it has more beauty in it than only showing the content that this lady is going down the street.”

The music in Rist’s work, too, has a painterly quality to it. The mixture of ambient soundscapes with songs sets off a cascade of emotional associations. Nature, childhood, the noises of our own bodies. The rushing water of the river Rhine, the amniotic river of the womb. Ambient music is not just the sounds of the outside world—of nature, On Land (to quote Brian Eno’s album title)—but the sounds of ourselves, of us. As Rist and Guggisberg show us, it is not just the world outside of us, but the worlds within ourselves.