Film
Battle of the Sexes 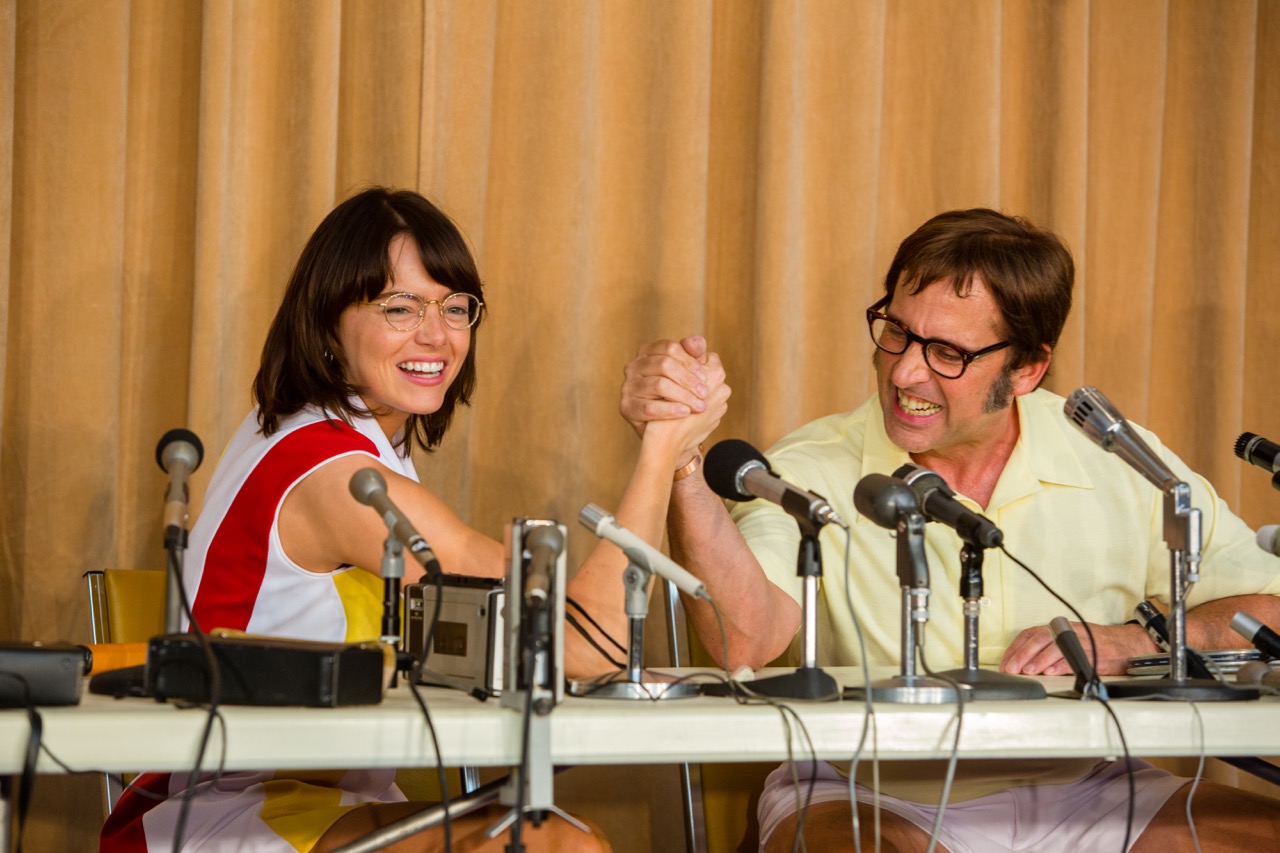 Battle of the Sexes, directed by Jonathan Dayton and Valerie Faris

Goddess, or maybe the she-devil, is in the detail: in Battle of the Sexes—a faithful if unimaginative re-creation of the events leading up to and including the stunt 1973 tennis match between Billie Jean King and Bobby Riggs that became a referendum on second-wave feminism—exacting attention is paid to the minutiae of era-specific costuming and accessorizing. Emma Stone, who plays King with a touch too much docility, alternates between two pairs of glasses, as the real-life champion athlete did at the time. In some scenes of Jonathan Dayton and Valerie Faris’s movie, the actress sports Steinem-esque aviator frames, in others round Lennon-style specs. The fastidiousness about the central shero’s eyewear becomes an apt metaphor for Battle of the Sexes, in which hindsight is always twenty-twenty. The story of a remarkable woman and her remarkable accomplishments suffers, as too many LGBTQ-themed twenty-first-century docudramas do, from an accretion of it-gets-better telegraphing. 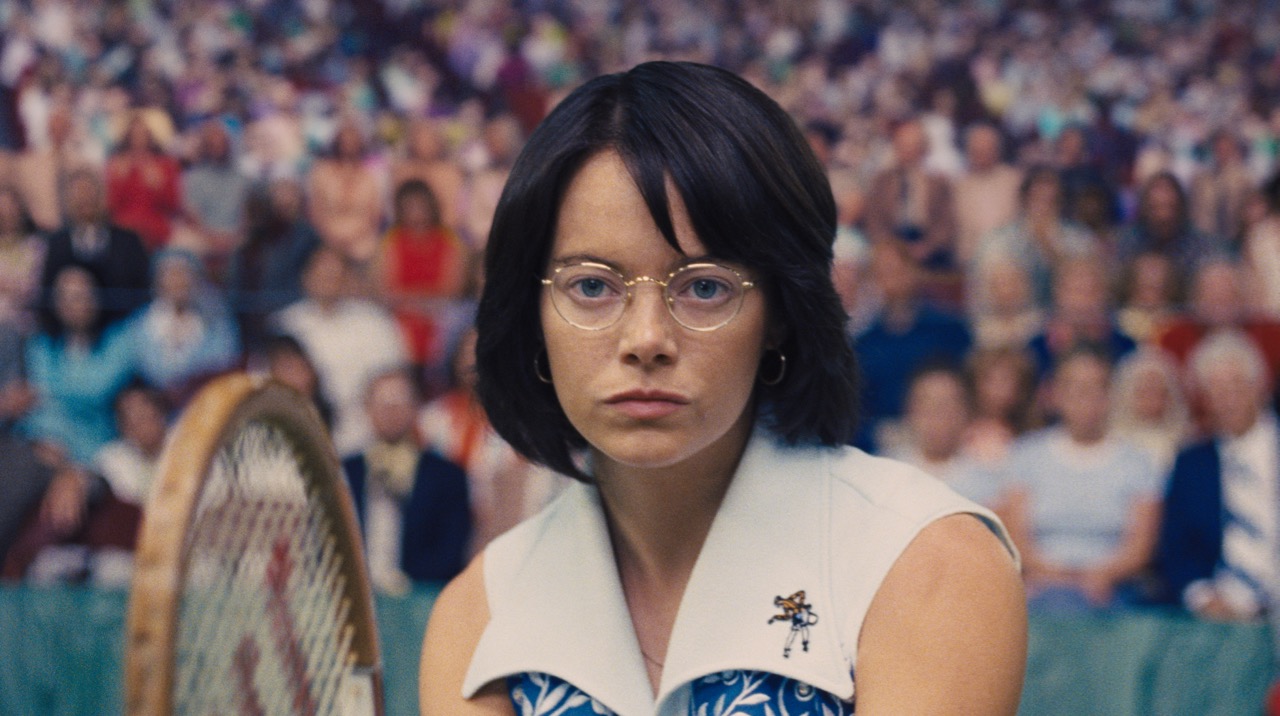 The period fetishism of Battle of the Sexes begins even before we see a human being in the frame: as the logo of the film’s distributor, Fox Searchlight, fills the screen, we hear the famous fanfare of its parent company, 20th Century Fox—drums and horns, largely silent for the past several years, meant to transport us back to the early 1970s. That familiar martial blare is soon replaced by the grunts and pants of Stone-as-King, rendered in blurry slo-mo as she volleys on the court, each thwack of her racquet a near sonic boom. She raises her fists skyward and beams; the crowd roars. King has won the 1972 US Open, a year after she became the first female player in the history of the sport to earn $100,000 in prize money. 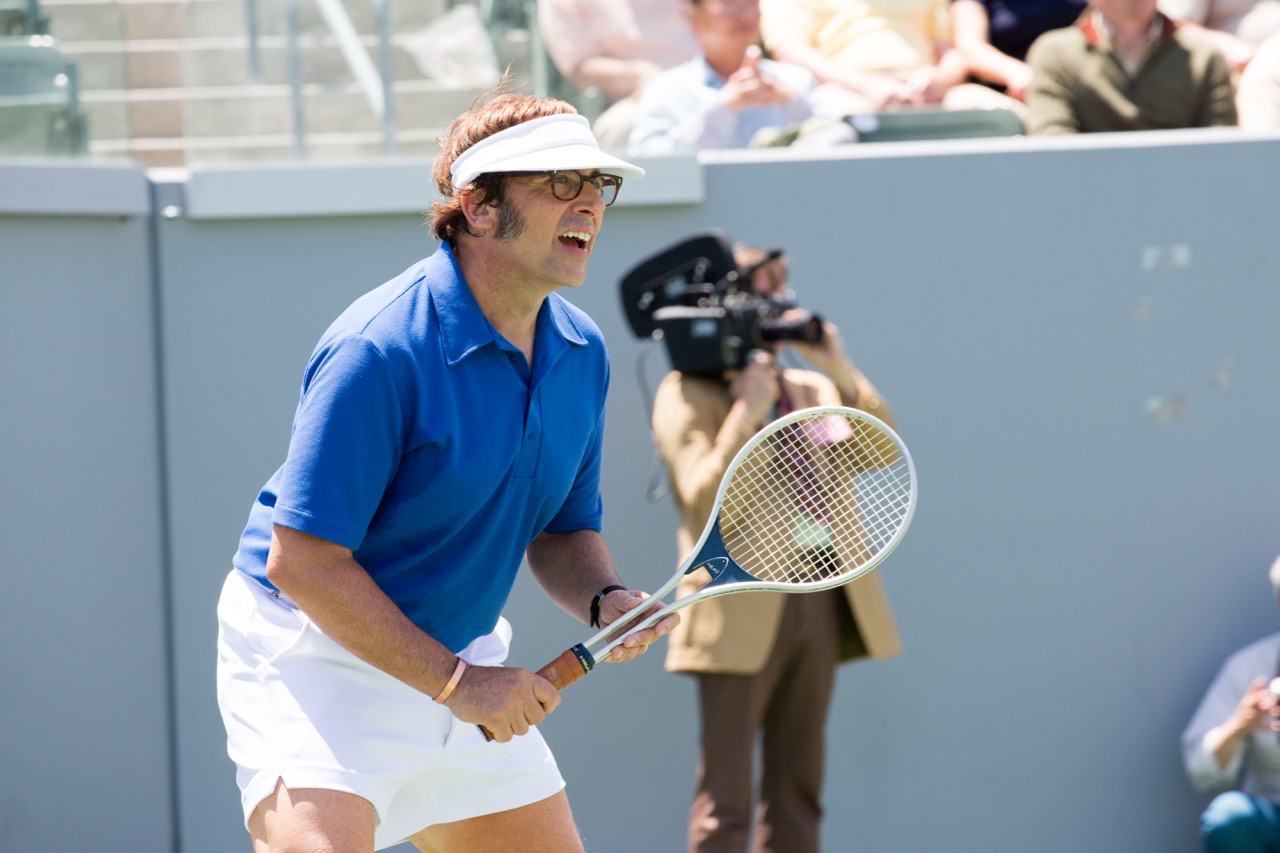 Her triumphs, complete with a congratulatory phone call from President Nixon—well wishes meticulously replicated from archival footage of the actual conversation between King and Tricky Dick—contrast with the debased status of the man who will be her most notorious opponent. Bobby Riggs (Steve Carell), a Wimbledon champ in 1939, is, in 1972, toiling as a middle-aged businessman, for a venture never clearly defined, in New York. He’s first seen as a tiny, insignificant figure, framed by the window on a high floor of a Manhattan office building. The tableau recalls a similar configuration in Alan J. Pakula’s Klute (1971). The graininess of the image in Battle of the Sexes also yokes it to the look of US cinema during the 1970s: Dayton and Faris’s movie was shot on 35mm by cinematographer Linus Sandgren, who used vintage lenses from that decade. 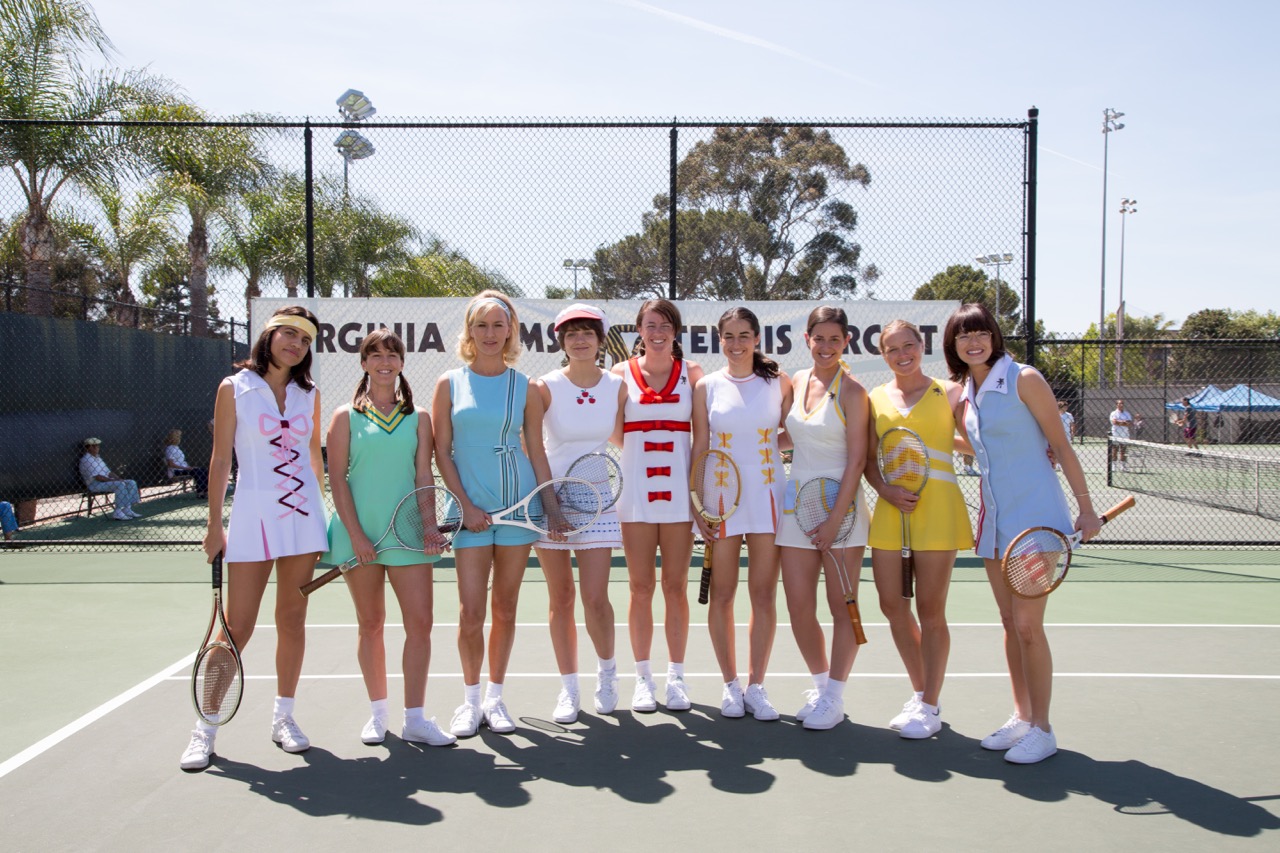 Occasionally laudable, the formal fussiness of Battle of the Sexes at least evinces a concern with precision, a quality lacking in the film’s treatment of the personal struggles of King (and, to a lesser extent, of Riggs). While the movie cogently, sometimes rousingly, lays out the tennis star’s unwavering commitment to combating sexism in her sport—King led a group of eight other female players in establishing, at great professional risk, a tour that provided more equal prize money between men and women—Battle of the Sexes explores its heroine’s acknowledgment of her same-sex desire via clichés.

That hokum is the hallmark of the movie’s creators. Originally slated to be directed by Danny Boyle, Battle of the Sexes went to Faris and Dayton after the English filmmaker had to drop out to make the sequel to Trainspotting on a tight deadline (Boyle is listed as a producer of the movie). The husband-and-wife duo are best-known for Little Miss Sunshine (2006), still the template for the dysfunction-glutted, feel-good Amerindie comedy. As reported in the New York Times, the couple tweaked the script—by Simon Beaufoy, who wrote Slumdog Millionaire (2008), Boyle’s ghastly fantasia of extreme deprivation—to make King’s personal life more prominent in the project. 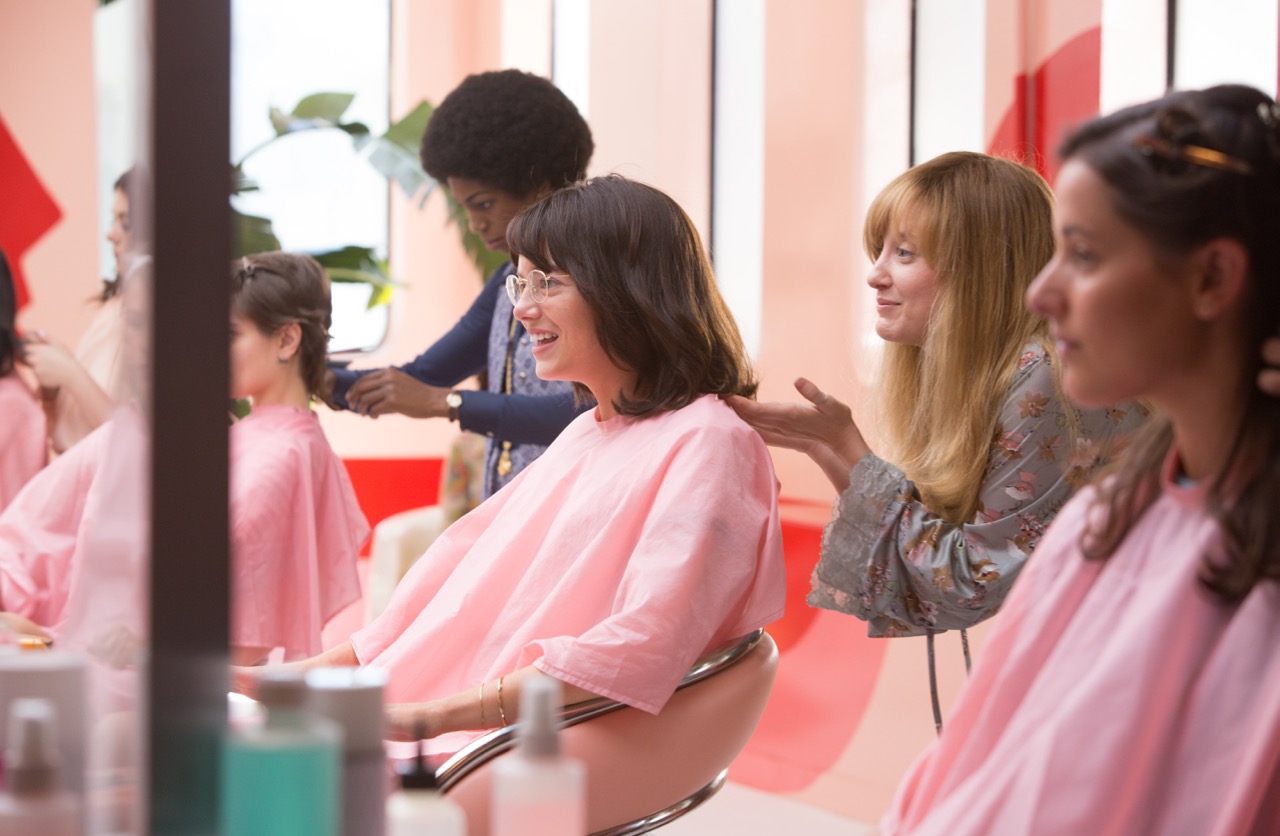 Raging daughter of Bilitis that I am, I can only salute the decision to foreground King’s lesberation, while wishing that it had been done more intelligently. The first words said by the first woman she will sleep with do not exactly exude sapphic subtlety: “So, Billie Jean, what do you want?” The blunt come-on is uttered by Marilyn Barnett (Andrea Riseborough), a hair stylist about to reshape the shag of the star athlete, by then seven years into her marriage to Larry King (Austin Stowell). Immediately besotted, Billie Jean catches a whiff of something that intoxicates her further. “Is that perfume?” she asks Marilyn, who corrects her: “It’s lavender oil.” No other scent, the product of that heavily signifying flower, will do for those about to become lavender lovers.

Their clandestine affair, consummated in a motel room, is sussed out by Ted Tinling (Alan Cumming), a real-life tennis couturier and openly gay man who warns his client, “Best be careful—the world isn’t such a forgiving place,” and by Margaret Court (Jessica McNamee), one of BJK’s main rivals at the time, and then as now, a virulent homophobe. (Today Court is a Christian minister in Perth, Australia.) After King repeatedly turns down Riggs’s entreaty to be his opponent in his man-versus-woman tennis match—a desperate attempt to return to the spotlight and forget, however briefly, the mundanity of the Gamblers Anonymous meetings his wife forces him to attend—the fifty-five-year-old has-been asks Court. The Aussie legend says yes, and is trounced. 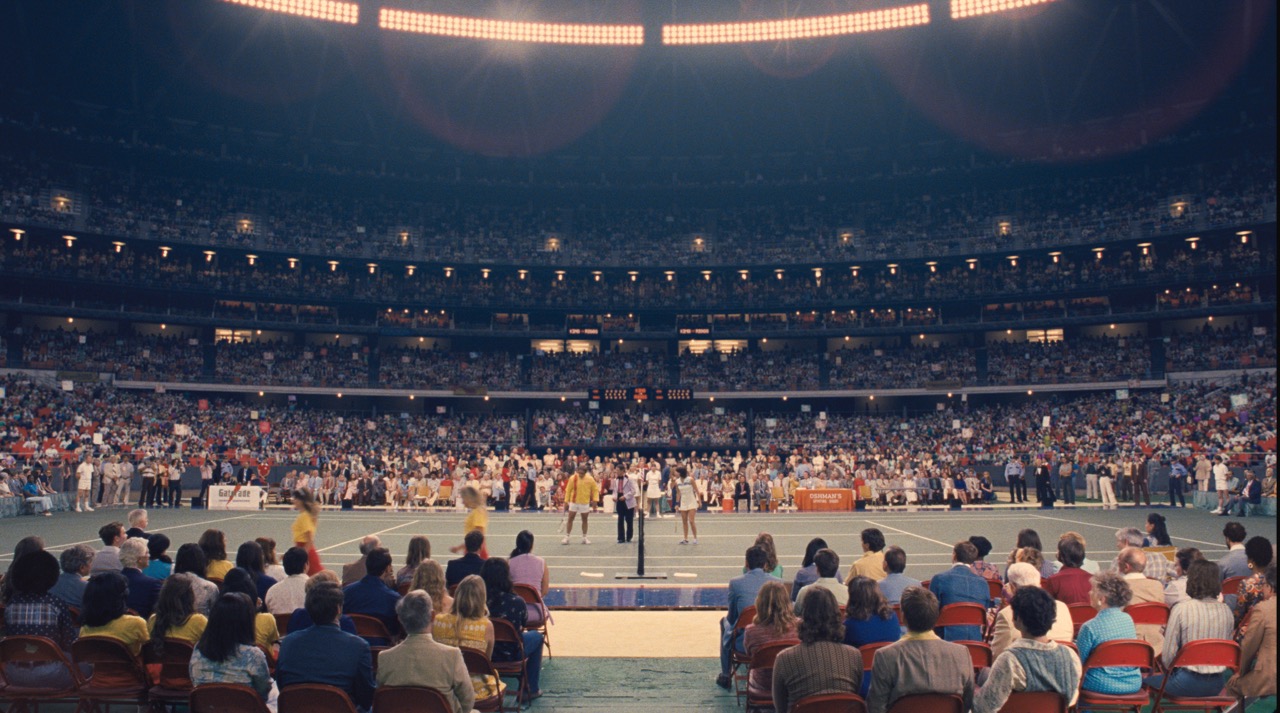 Riggs, now jokingly calling himself “the number-one ladies’ player,” challenges King again, this time for a $100,000 purse. BJK realizes she must agree to participate in this clown’s circus—to redeem her gender, to secure and promote the tour she helped found (which would become the Women’s Tennis Association), to prove a point. As staged in the film, the match, which took place on September 20, 1973, in the Houston Astrodome, is yet another instance of excessive replication, a spectacle doubled, most garishly when archival footage of Howard Cosell is repurposed to make him the screen partner of Natalie Morales, the actress who plays Rosie Casals, a tennis pro and pal of King’s who was a commentator during the competition.

Mimesis abounds in Battle of the Sexes, a film that also chooses what to wipe away entirely. In the most mawkish line of dialogue, Cummings’s avuncular Ted tells King at the end, “Someday we will be free to be who we are. And love who we love.” Closing title cards announce King’s longtime partnership with Ilana Kloss; both women, we learn, are godparents to the kids Larry had with his second wife. Never mentioned is Marilyn Barnett’s “palimony” suit against BJK in 1981, which effectively outed the tennis star and led to the ruinous loss of her endorsements. It was another battle—painful, humiliating—King ultimately won, conveniently excised from the herstorical record.