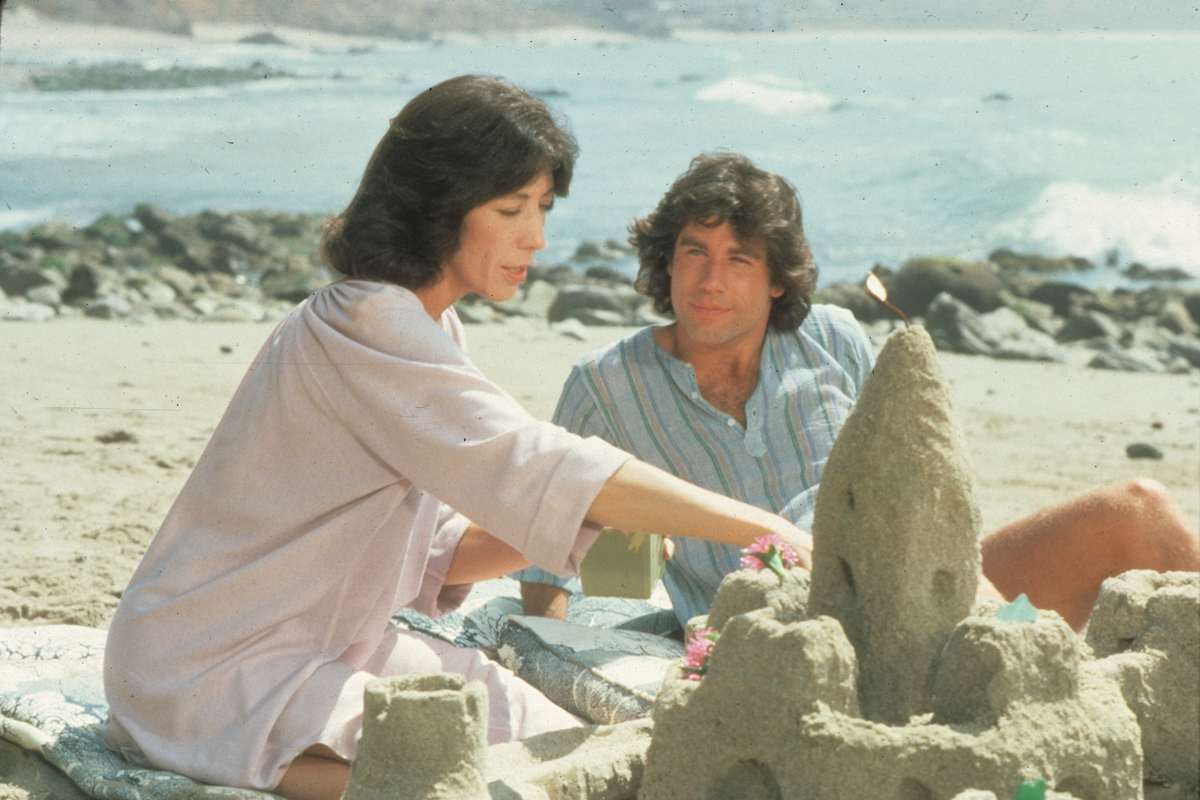 Moment by Moment, written and directed by Jane Wagner, now available on Blu-ray and DVD from Kino Lorber

By 1978, when Jane Wagner’s romantic drama Moment by Moment was released, its stars, Lily Tomlin and John Travolta, were at the peak of their fame. The year before, Tomlin—a regular on NBC’s Laugh-In from 1969 to 1973—opened Appearing Nitely, her first one-woman Broadway show, an event that led to a cover for Time magazine, which hailed her as the “New Queen of Comedy.” Travolta had become the era’s reigning male sex symbol thanks to his role as the peacocking nineteen-year-old prince of a Bay Ridge disco in Saturday Night Fever, his superstar status further cemented by his performance in Grease, the 1950s fantasia that premiered just six months before Wagner’s movie.

Critically savaged and a box-office disappointment, Moment by Moment—which centers on the age- and class-discordant relationship between Tomlin’s Trisha, a wealthy woman approaching middle age who retreats to her Malibu beach home while her marriage unravels, and Travolta’s Strip (as in Sunset), a twentyish drifter—decisively ended the white-hot run of its stars and would be the only film Wagner ever directed. Yet this stiff, strange, oddly touching movie, rarely revived and only now available on home video, never fails to fascinate. It demonstrates, at the very least, the challenges of performing desire, in the process revealing the different kinds of emotional connections that can fill the void left by the utter absence of sexual chemistry between a screen couple. 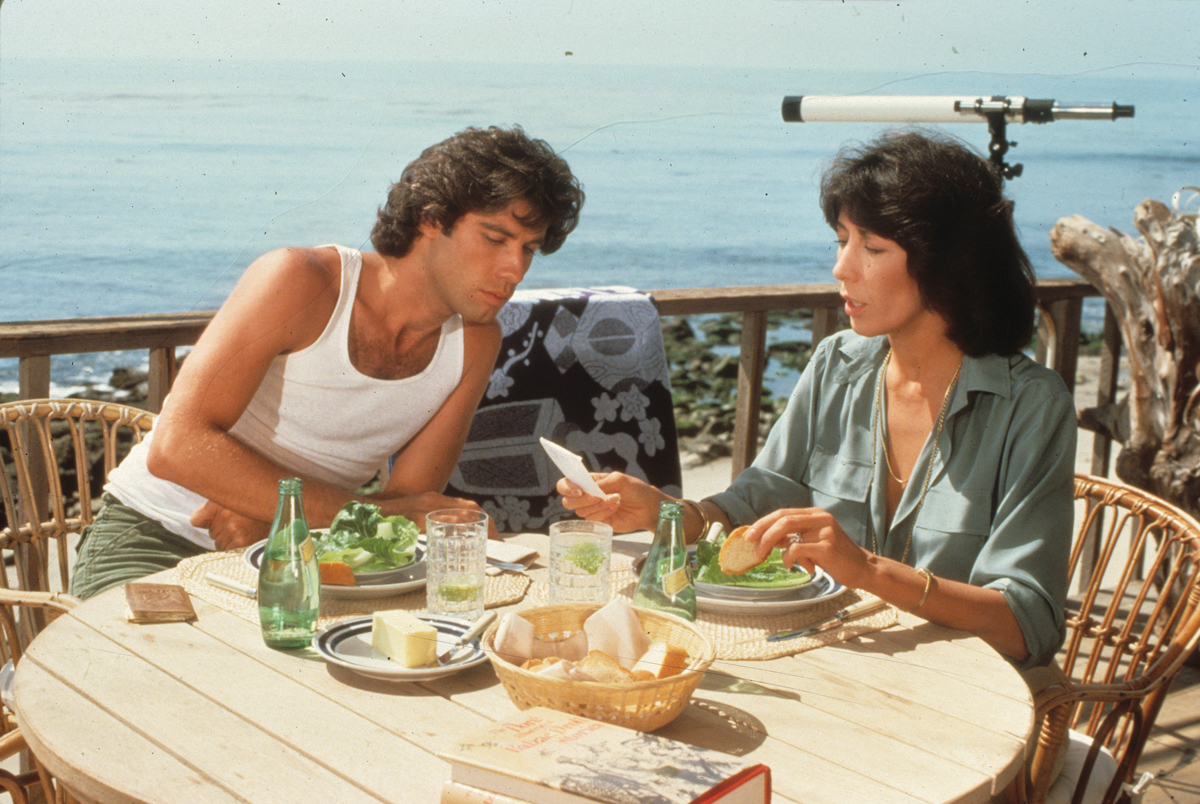 John Travolta as Strip and Lily Tomlin as Trisha in Moment by Moment. Courtesy Kino Lorber.

This straight love story was the creation of a gay woman, one in a relationship, begun about seven years prior (and which continues to this day), with the lead actress. Wagner and Tomlin were not only romantic partners but also artistic collaborators: the former was on the writing staff of all seven of the latter’s TV specials (airing in the ’70s and ’80s) and coscripted Appearing Nitely with Tomlin. Their relationship was enough of an open secret that in 1975 Time offered to put Tomlin on the cover if she came out; she refused, telling Ellen DeGeneres (whose infamous 1997 “Yep, I’m Gay” cover for that same magazine proved disastrous to her career) in 2019, “It was a hard decision to make. . . . I wanted to be acknowledged for my performance[s].” (Tomlin’s sexuality became a matter of public record in 2000.)

One of those performances was her astonishing big-screen debut in Robert Altman’s kaleidoscopic 1975 ensemble film, Nashville, in which she plays Linnea Reese, the stoic spouse of a self-absorbed attorney, a devoted mother of two deaf pubescent children, and an occasional gospel singer. She is also the somewhat unlikely crush of a philandering country-rock singer named Tom (Keith Carradine), who invites her to a club where he’s playing that night. Sitting in the back of this bar, where three of Tom’s most recent bedmates are also assembled, Linnea slowly becomes aware that she is the “someone kinda special” to whom the handsome, lanky libertine dedicates his latest number, “I’m Easy.” As Tom croons this ballad, Tomlin gives a mesmerizing performance of being seduced: Linnea subtly parts her lips, suggesting sexual avidity, and touches her clavicle under her blouse, as if to remind herself that she has a body, has carnal needs. 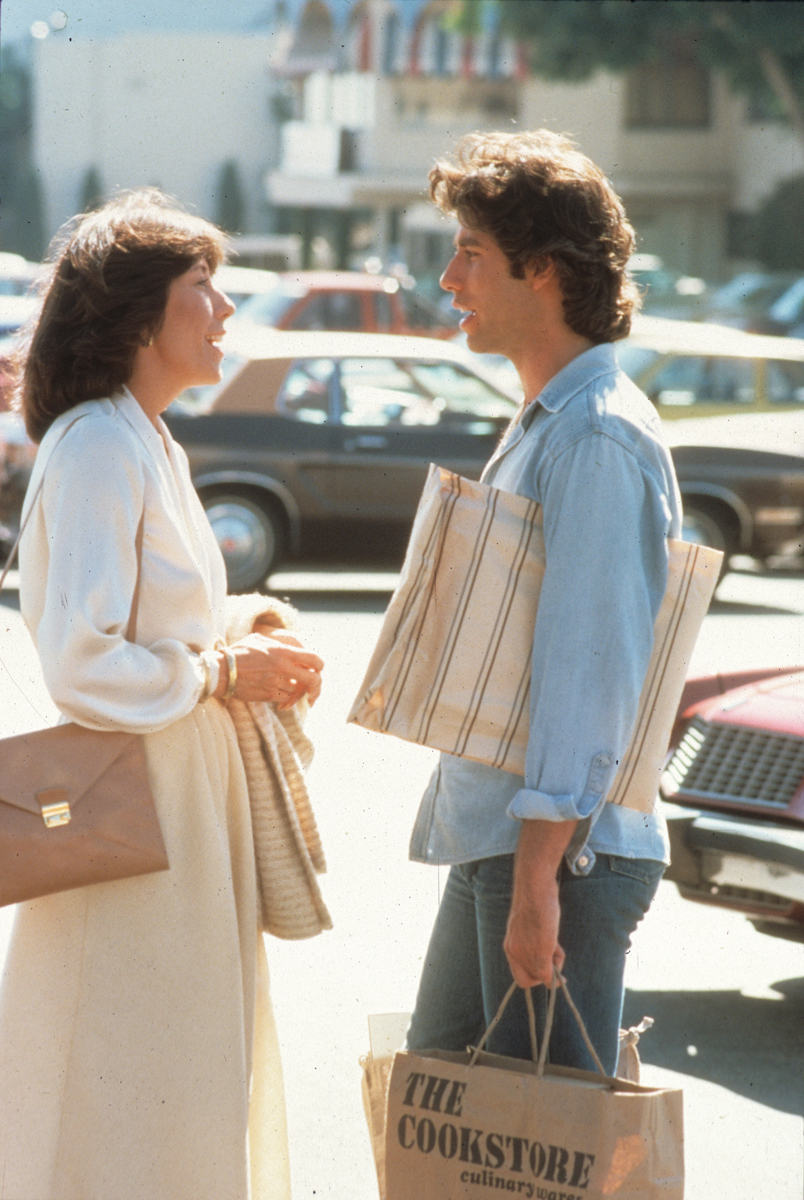 In this scene—a sequence of shot/countershots, in which, crucially, Tom and Linnea aren’t in the same frame—Tomlin brilliantly enacts heterosexual desire. That feat is never evidenced in Moment by Moment, a film that requires her and Travolta often to be within inches of each other. In its opening scene, Tomlin’s Trisha, bedecked in white silks and ecru linens, saunters down Rodeo Drive. The segment, scored to syrupy sax, plays as a sedate echo of Saturday Night Fever’s propulsive intro, in which Travolta’s Tony Manero swaggers down southwest Brooklyn’s 86th Street, the rumble of an elevated subway adding to the percussion of the Bee Gees’ “Stayin’ Alive.” (The showman Robert Stigwood, who managed that chart-topping sibling trio, produced SNF, Grease, and Moment by Moment.) During her stroll past blocks of high-end boutiques, Trisha’s mouth is slightly agape—a gesture that recalls Linnea’s in the Nashville scene described above yet here conveys not sexual appetite but stupefaction. Underscoring the off-kilter, narcotized state that Tomlin seems adrift in, her character’s first words in Moment by Moment are sadly all too apt: “What about the sleeping pills?”

That importunate query is delivered to an employee at a Beverly Hills drugstore, where Trisha encounters Strip. Or rather reencounters: Strip alacritously reminds her that he once did valet parking for a party she and her husband held at their beach house. Aloof and impatient to end the conversation, Trisha drives off to her littoral resort, where she hopes to allay the pain and humiliation caused by her real-estate-developer spouse’s affair with a younger woman by passing the days in utter seclusion, with only a fluffy white lap dog, old issues of Architectural Digest, and My Man Godfrey on late-night TV for diversion. 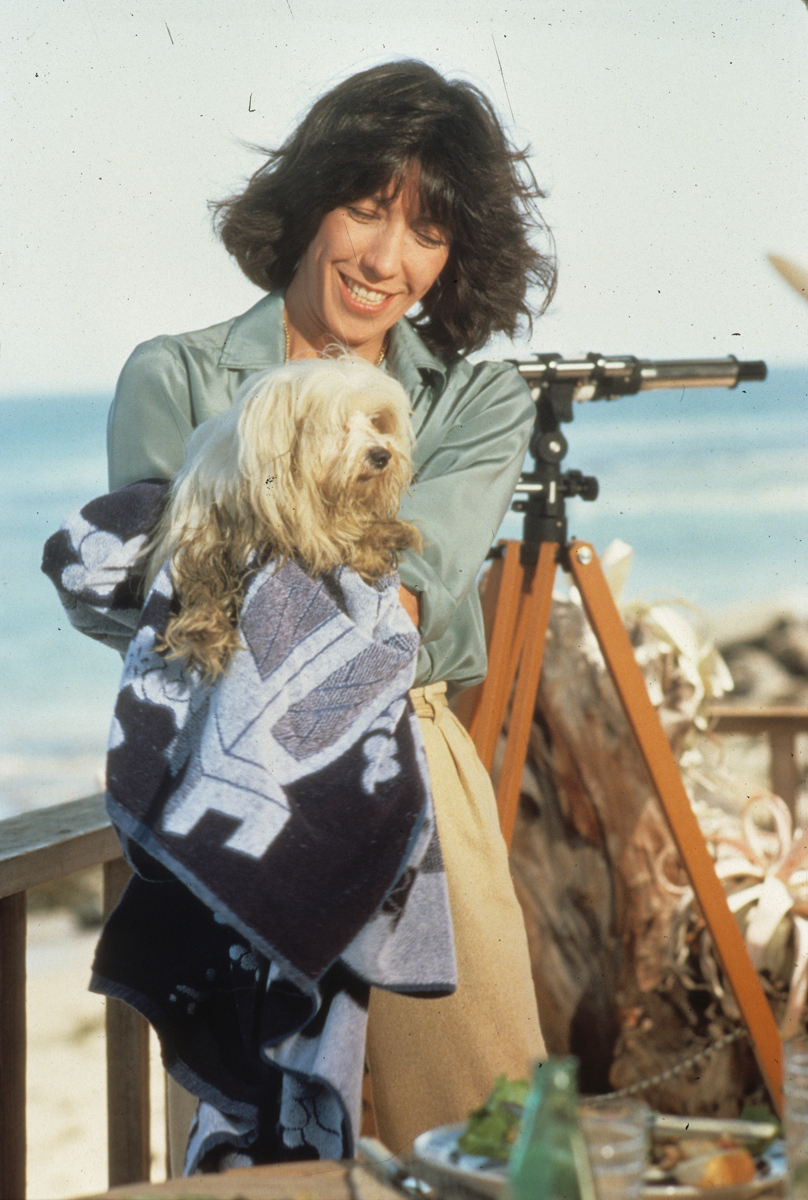 But she can’t seem to shake Strip. There he is, trudging through the sand, interrupting caftan-clad Trisha’s quality me-time by proffering a gift: some black-market Seconal. She responds indifferently. “The only reason I scored you those reds is so that I could open up a line of communication with you,” he tells her, an unguarded admission that seems to crack Trisha’s hauteur. Or could it be the young man’s gorgeous body that stirs something in the unhappy upper-crust woman? Much like the scenes in Saturday Night Fever in which Tony, at home, is clad only in tight black briefs, several sequences in Moment by Moment feature Travolta wearing almost nothing. (While the stud may insist that his nickname refers to the notorious billboard- and club-glutted stretch of Sunset Boulevard, it also seems to reflect his eagerness to undress.)

Nearly naked, Strip—and thus Travolta—is sexualized, made even more vulnerable. But the risk was not the actor’s alone. Although both leads were making significant departures from their previous roles, the leap was greater for Tomlin, who had risen to prominence for her intricately detailed character-based comedy, a talent partially showcased in Nashville. Serious, solemn, levity-free, Moment by Moment revealed the normally dynamic, agile performer to be tentative and overwhelmed. 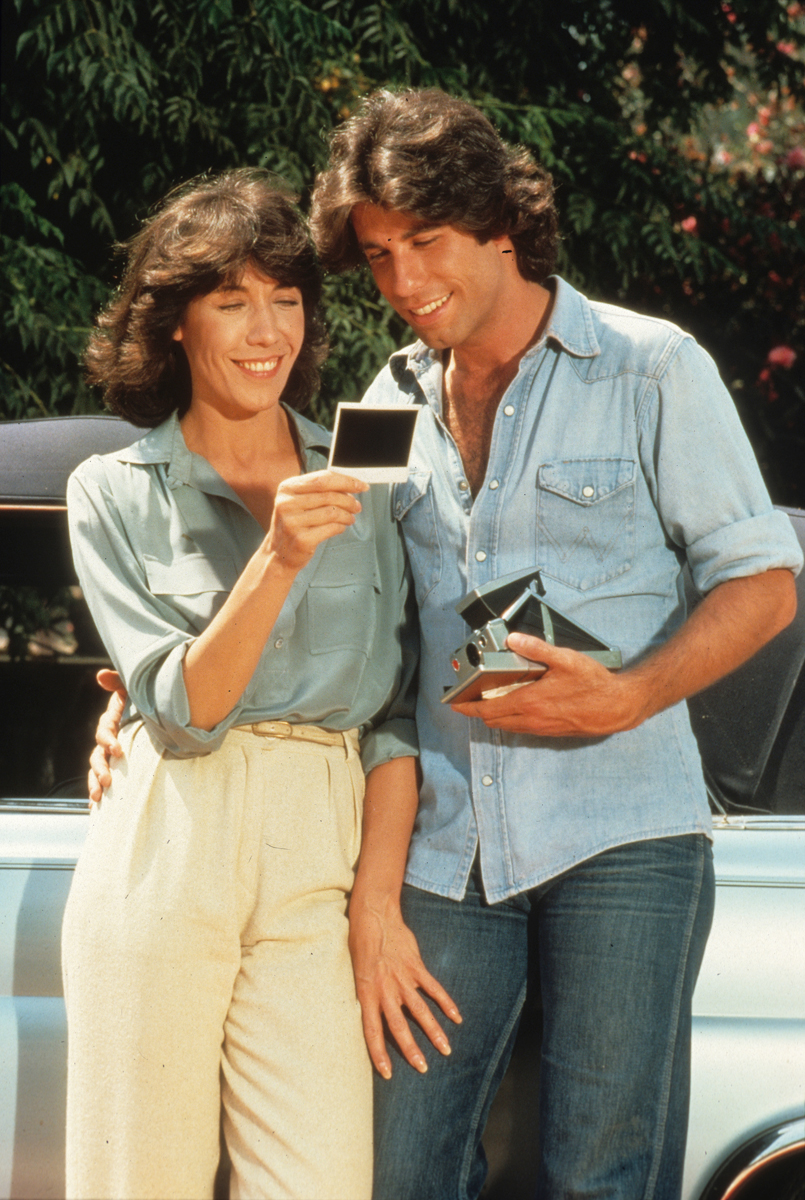 However scarred by the excoriating reviews of Moment by Moment, Tomlin and Travolta bounced back with their next films, both from 1980: 9 to 5 and Urban Cowboy respectively. In 1985, Wagner was the sole writer and director of Tomlin’s greatest stage triumph, the one-woman show The Search for Signs of Intelligent Life in the Universe. The search for signs of intelligible heterosexual life in Moment by Moment may be futile—but all the more intriguing for it.

Melissa Anderson is the film editor of 4Columns. Her book on David Lynch’s Inland Empire will be published in November by Fireflies Press as part of its Decadent Editions series.