Film
Portrait of a Lady on Fire 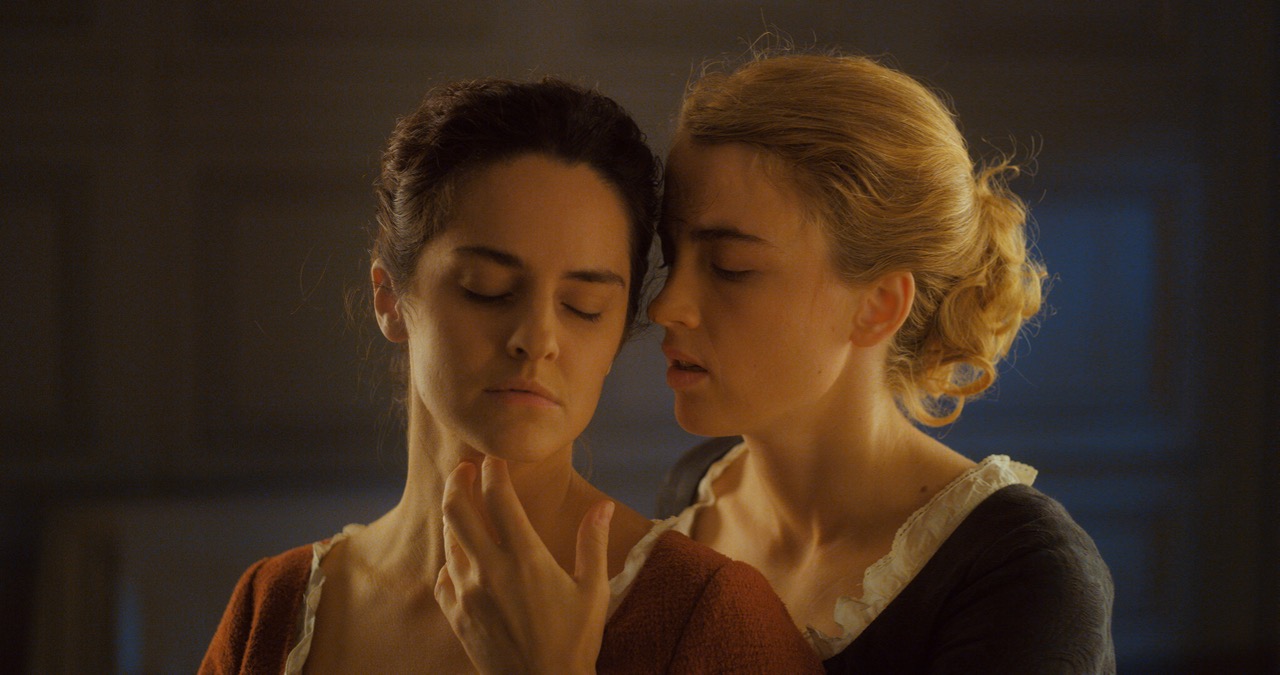 Noémie Merlant as Marianne and Adèle Haenel as Héloïse in Portrait of a Lady on Fire. Image courtesy Neon.

Portrait of a Lady on Fire, written and directed by Céline Sciamma, now playing in New York and Los Angeles through December 12, 2019

Sapphically swoony but occasionally didactic, Céline Sciamma’s Portrait of a Lady on Fire weighs down its love story with Linda Nochlin–esque digressions. Although set in 1770, this same-sex romance is deeply informed by the art-herstorical spirit of the 1970s, earnestly recalling Nochlin’s famous query: Why have there been no great women artists? If the film lurches at times with schematic dudgeon—devolving into a checklist of coolly outraged points to be made—it also gloriously blooms as a tale of lesbian ardor.

Sciamma’s movie, her fourth as writer-director and the winner of the best screenplay award at the Cannes Film Festival in May, opens with Marianne (Noémie Merlant) stiffly posing in a robe battante for her life-drawing students. “Take time to look at me,” she instructs her dewy distaff charges (and, by extension, the film’s spectators). One of her pupils has upset teacher by bringing out from storage a painting—the title of which Sciamma’s film shares—that Marianne created years ago. The canvas prompts a flashback of Marianne, laden with art supplies, in a small vessel keeling in choppy waters as it makes its way to the coast of Brittany. She has been dispatched to a seaside chateau to fulfill an assignment: painting the wedding portrait of Héloïse (Adèle Haenel), betrothed to a Milanese suitor. 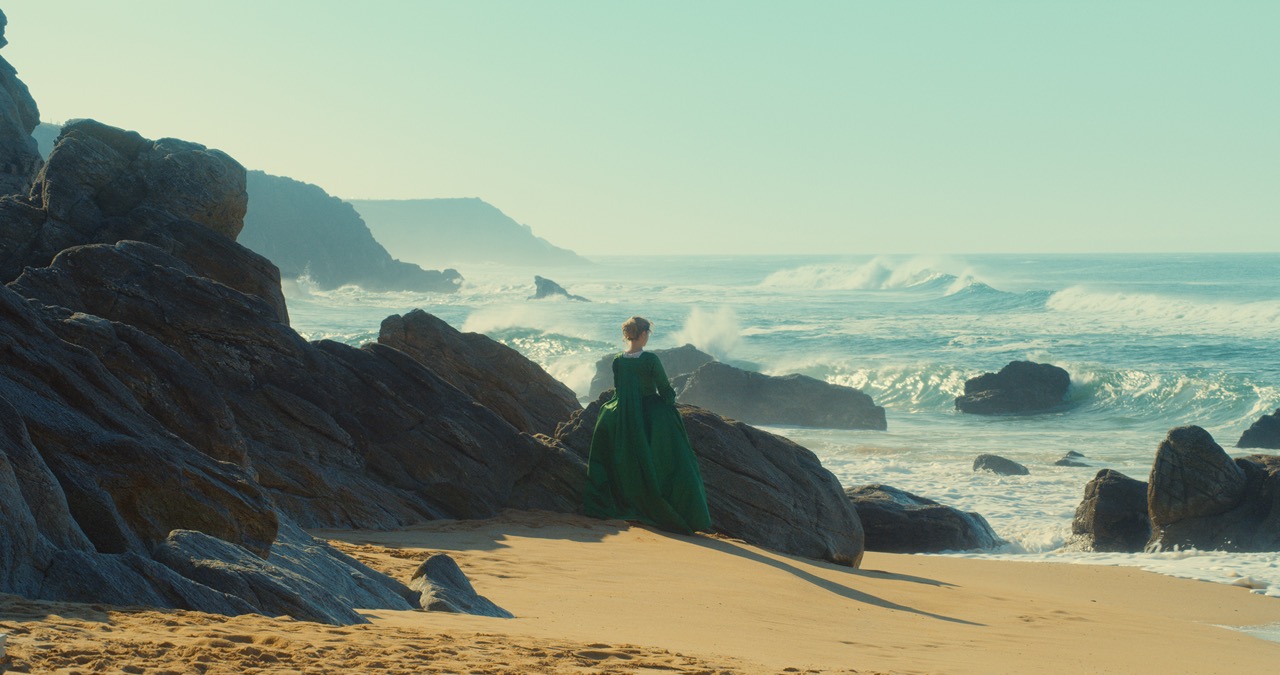 Adèle Haenel as Héloïse in Portrait of a Lady on Fire. © Lilies Films.

Marianne must complete this commission surreptitiously, for Héloïse “refuses this marriage,” as the reluctant bride’s mother (Valeria Golino)—a countess whose own likeness was painted by Marianne’s father—explains. A previous attempt at a portrait (by a male painter) had to be abandoned owing to Héloïse’s refusal to cooperate; a shot of that unfinished picture yields the none-too-subtle sight of a headless woman. But now the comtesse has devised a ruse: Marianne will pretend to be Héloïse’s companion, joining her on her daily littoral strolls and memorizing every aspect of her visage, to be re-created without her knowledge.

Sciamma wisely prolongs our first glimpse of the face of Héloïse/Haenel, who enters the film about twenty minutes in. She’s initially seen from the back, stridently walking, then breaking into a sprint, halting perilously close to a cliff’s edge. When she finally turns around to address Marianne, the moment thrills as a true star entrance, with Haenel’s enormous, piercing emerald eyes seemingly filling half the screen. 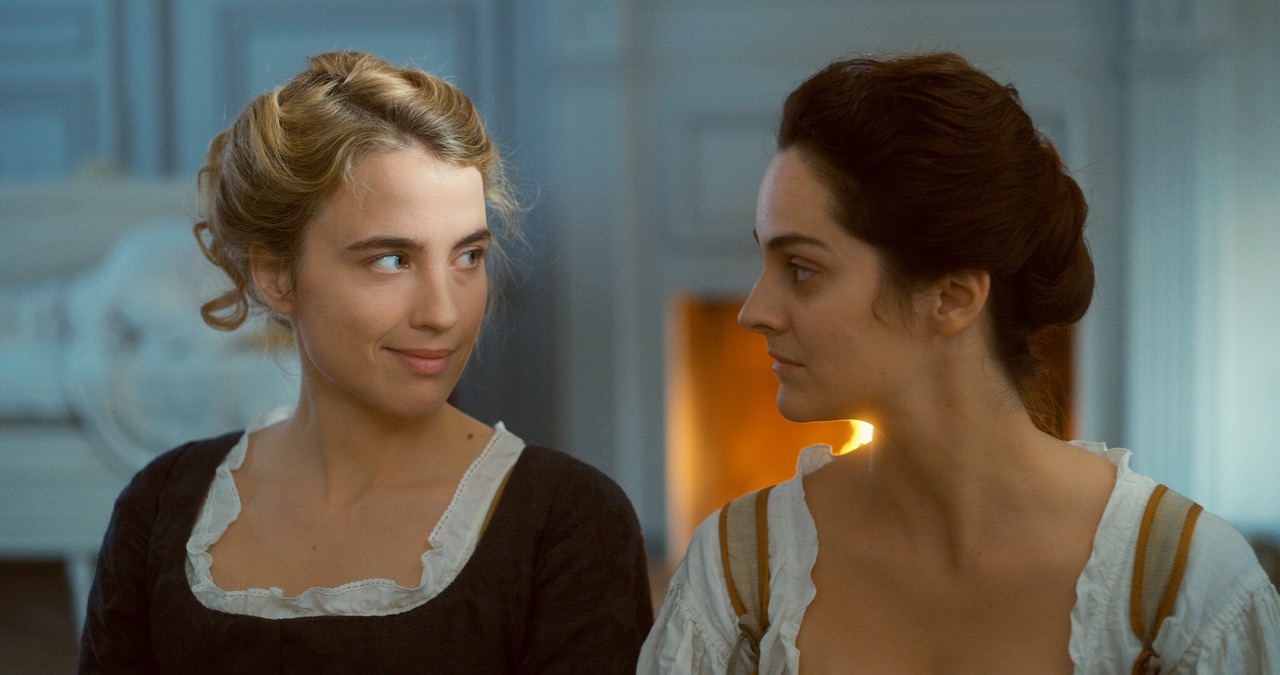 Adèle Haenel as Héloïse and Noémie Merlant as Marianne in Portrait of a Lady on Fire. Image courtesy Neon.

Marianne may be tasked with scrutinizing Héloïse, but the unhappy aristocrat is just as ravenous for biographical information about her consort. In the best of these episodes, we witness the sheer delight that each woman experiences after being introduced to something novel by the other, as when Marianne plays a snippet of Vivaldi on the harpsichord for Héloïse, a former convent resident who has known only sacred music. In the worst, the interactions have the leaden quality of a Socratic dialogue. “Being free is being alone?” Héloïse asks rhetorically—and insipidly. After Marianne admits the truth about why she’s really at the Breton manor—candor that moves Héloïse to actually pose for her—artist and subject engage in a dully sententious Q&A. To Héloïse’s inquiry as to why women artists are forbidden from painting nude male models, Marianne responds: “It’s mostly to prevent us from doing great art. Without any notion of male anatomy, the major subjects escape us.” 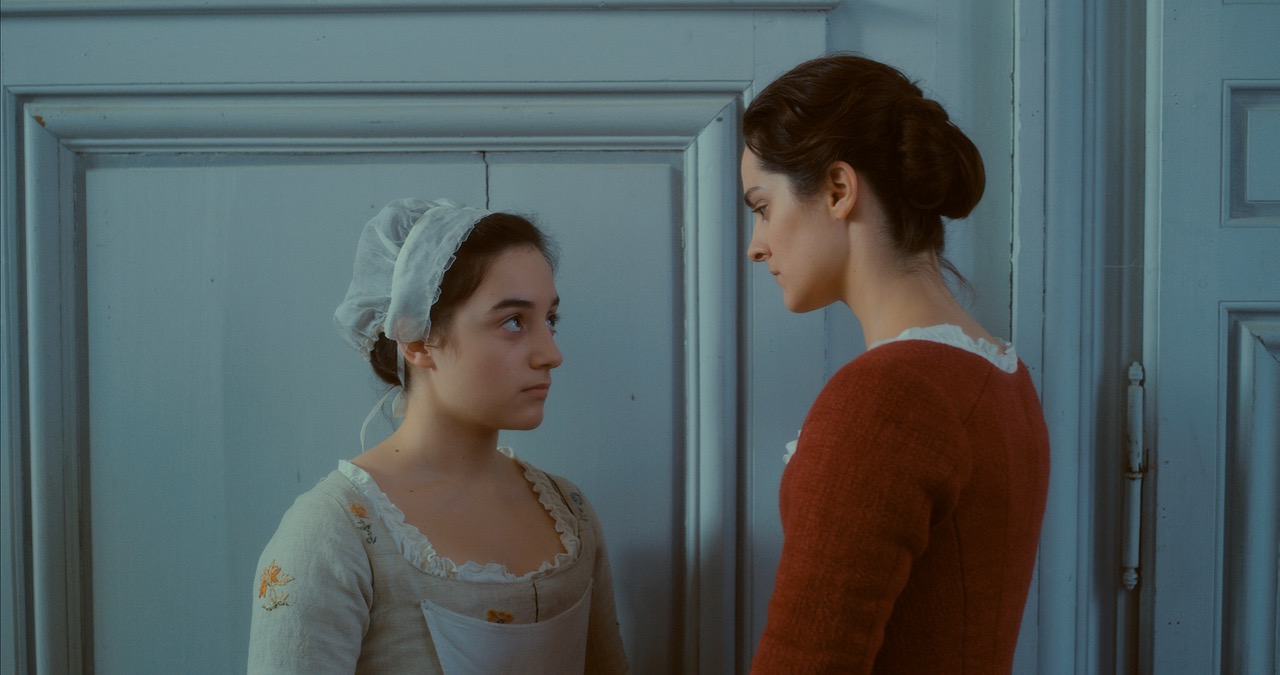 Luàna Bajrami as Sophie and Noémie Merlant as Marianne in Portrait of a Lady on Fire. Image courtesy Neon.

Beyond these rehashed second-wave polemics, Portrait of a Lady on Fire grows wobbly with its utopian vision of an interclass sisterhood, in which Sophie (Luàna Bajrami), the young, tiny maid of the grande maison, enjoys an uncomplicated friendship with Marianne and Héloïse. While this amity occasions one of my favorite minor scenes—Sophie heating cherry pits to insert into a compress to alleviate Marianne’s menstrual cramps, a sequence that puts a new spin on the term period piece—the triumvirate can sometimes appear as an empty emblem. One facile tableau shows the three women, hidden by tall grass, making themselves visible at the exact same moment; another reveals the trio, silhouetted in vespertine light, trudging in lockstep.

Yet the frustrating results of Sciamma’s heavy hand (which also encumbered her previous feature, 2014’s Girlhood, about female French-African teenagers from the banlieues) are offset by the much more pleasing effects of her slow hand. By the time of Marianne and Héloïse’s first kiss, deep into the film’s second half, Sciamma has skillfully built up our anticipation of this pivotal event. Prior to that sensational smooch—which takes place, with an apt melodramatic flourish, under a sea arch—the director and her two principal performers have vivified the telltale signs of falling for someone. Each glance or pause that lingers a second too long communicates not just erotic longing but cerebral enmeshment. “Do all lovers feel they’re inventing something?” Héloïse asks Marianne, in one of the film’s best lines, shortly before they fall into bed. Languid and sex-drunk the morning after, they’re clearly eager to start reinventing.

Carnal, tender, ignited by boundless curiosity, the love story between Marianne and Héloïse is rooted in a real-life romance: Sciamma wrote the part of Héloïse specifically for Haenel, her ex-girlfriend. The two first collaborated on Sciamma’s debut feature, Water Lilies (2007), in which Haenel plays the sexually manipulative captain of a high-school synchronized-swimming team; some years after that film’s release, they became a couple. The actress famously came out by acknowledging her relationship with Sciamma during the 2014 ceremony for the Césars, France’s equivalent of the Oscars. Concluding her acceptance speech after winning in the Best Supporting Actress category (for playing the more balanced of two sisters in Katell Quillévéré’s drama Suzanne), Haenel haltingly said, “I wanted to thank Céline . . . because . . . because I love her, voilà.” 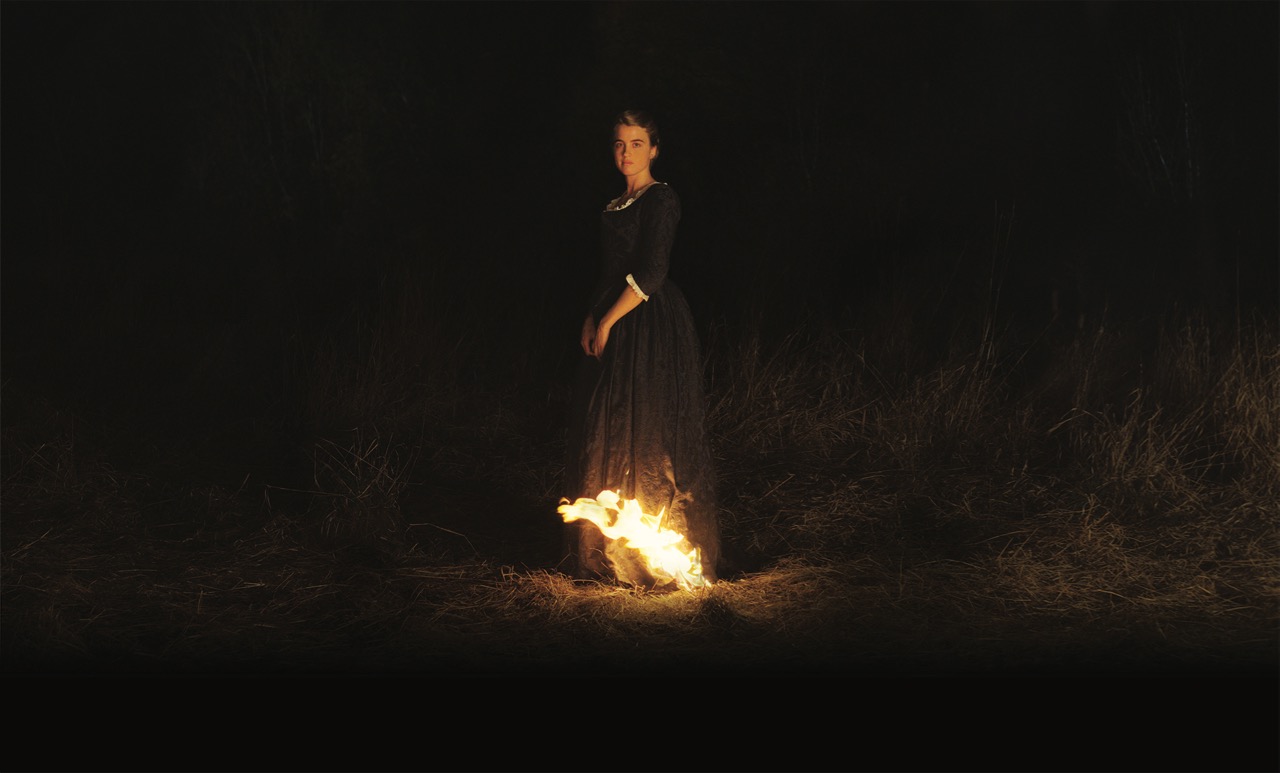 Adèle Haenel as Héloïse in Portrait of a Lady on Fire. © Lilies Films.

Last month, Haenel spoke even more fervently about Sciamma. Their romantic past came up in the middle of a live follow-up interview Haenel did with Mediapart, a French investigative news site that published in early November a detailed article supporting the actress’s claims that Christophe Ruggia, director of The Devils (2002), had sexually harassed her for three years, beginning with the shooting of that film, Haenel’s first, made when she was just twelve. Meeting Sciamma, Haenel explains, proved transformative: “We had a long and beautiful love affair together, and when I talk about people who saved my life I begin with her. . . . She was someone who listened to me . . . who listened to my anger.” Likewise, Marianne gives Héloïse her undivided attention—without which no beautiful love affair can flourish.