Hit movie: Scorsese and Pacino do Hoffa and the mob. 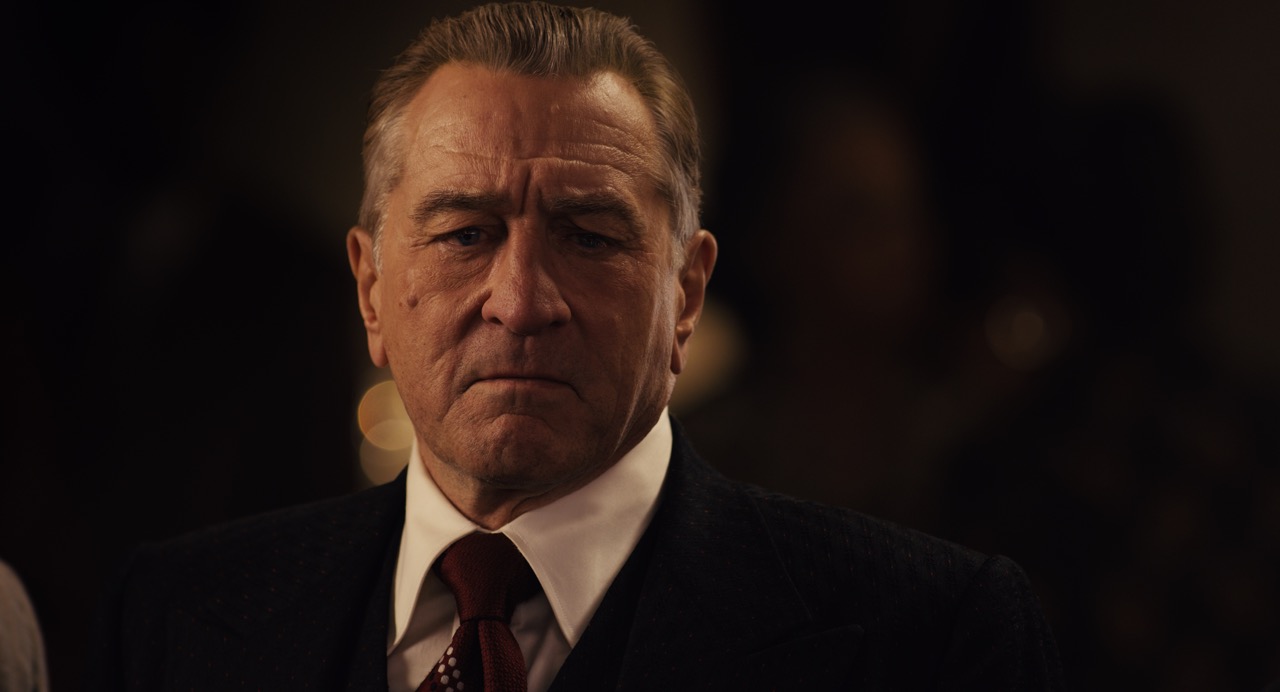 Robert De Niro as Frank Sheeran in The Irishman. © 2019 Netflix US, LLC. All rights reserved.

Decrepitude and moral rot are the motifs of Martin Scorsese’s The Irishman, an epic dirge, roughly spanning 1950 to 2000, about real-life American thugs and leaders, categories that are sometimes indistinguishable. But this opera seria about decay is handled with utmost brio, vivified by the signature élan of one of American cinema’s most enduring big-canvas filmmakers.

Scorsese’s movie, which was written by Steven Zaillian, adapts Charles Brandt’s 2004 book, I Heard You Paint Houses: Frank “the Irishman” Sheeran and Closing the Case on Jimmy Hoffa. This work of creative nonfiction is based on Brandt’s taped interviews with Sheeran, a union official and Mafia associate who, in the year before his death, in 2003 at age eighty-three, claimed to have carried out the 1975 mob-mandated killing of his close friend Hoffa, the Teamsters potentate who cozied up to organized crime. (Hoffa was not the only mobbed-up labor head, of course; the Mafia’s infiltration of unions dates back to at least the 1930s.) Sheeran is played in the film by Robert De Niro, tellingly first seen as a white-haired, wheelchair-bound resident of a Catholic nursing home. This infirm old guy narrates—sometimes directly to the camera, often via voice-over—the past fifty years of his life and the decades he spent as a mentee of both Russell Bufalino (Joe Pesci), the kingpin of a Pennsylvania crime family, and Hoffa (Al Pacino). 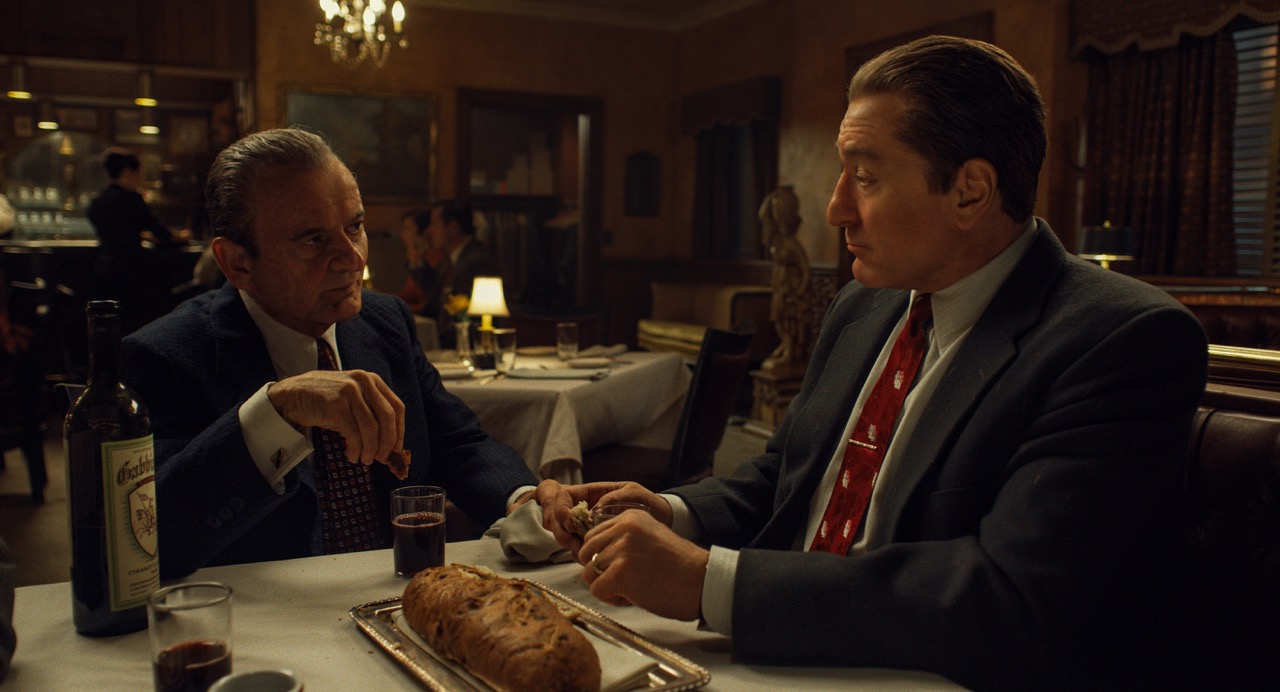 Joe Pesci as Russell Bufalino and Robert De Niro as Frank Sheeran in The Irishman. © 2019 Netflix US, LLC. All rights reserved.

De Niro, Pesci, and Pacino (not to mention Scorsese) are all deep into their seventies; a visual effect known as “de-aging” was devised for The Irishman to allow the actors to portray younger versions of their characters. The technology is impressively seamless—De Niro, for example, doesn’t look spectrally airbrushed as a fortyish Sheeran. More poignantly, this CGI rewinds the clock on De Niro and Pesci so that their digitally rejuvenated mugs in The Irishman put us in mind of their unaltered, middle-aged faces in Casino (1995), Scorsese’s coke-fueled saga of mob-ruled Vegas in the ’70s and ’80s. The Irishman, De Niro’s ninth film with the director, marks their first collaboration since Casino’s release almost a quarter century ago. Pesci was coaxed out of retirement from acting to reunite for the fourth time with De Niro and Scorsese. (Prior to Casino, the three had made 1980’s Raging Bull, a boxer biopic in which made men loom in the background, and 1990’s Goodfellas, Scorsese’s first wiseguy epic.) 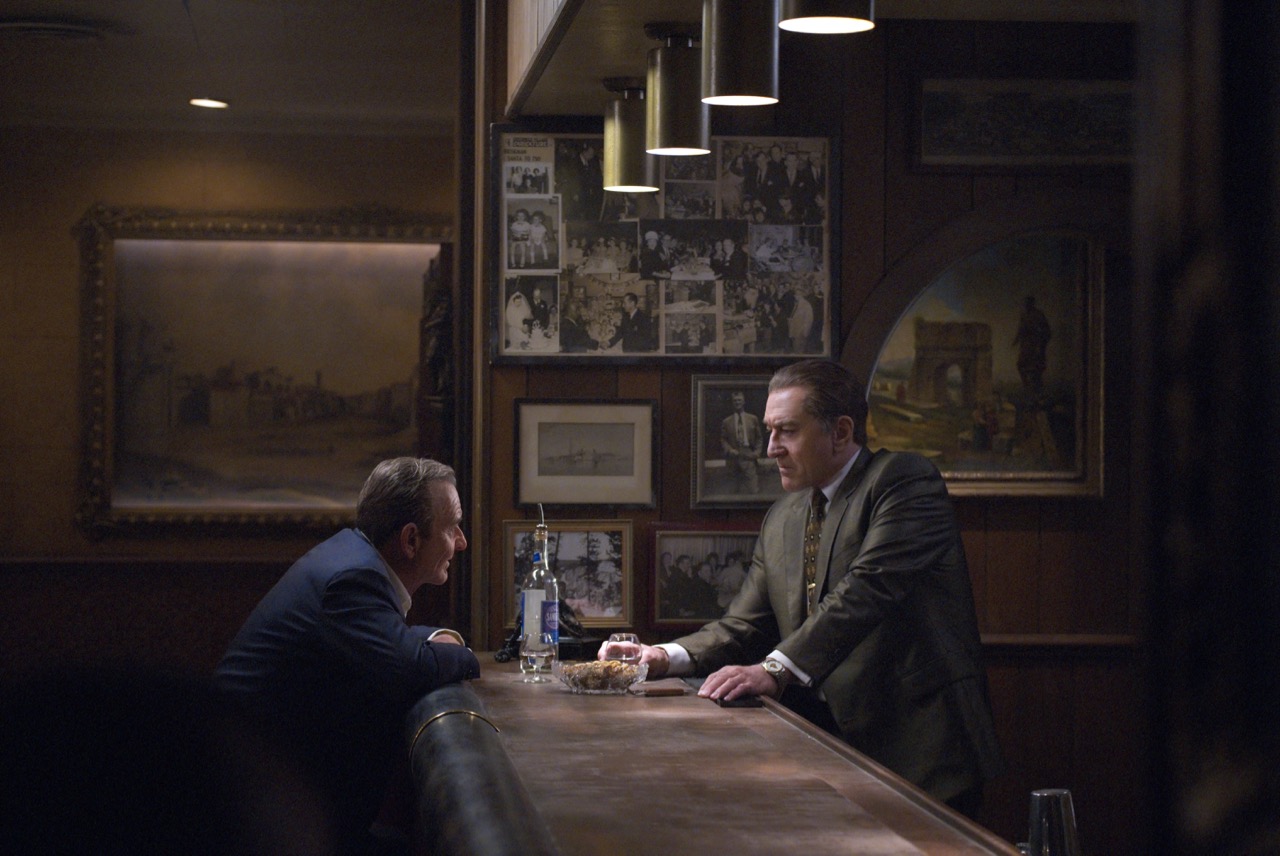 Both Goodfellas and Casino surge with glitzy, gaudy energy, pinwheeling with the flamboyant vulgarities and savage brutalities of its dramatis personae; Pesci’s performances in particular in those films still stand out for their robust psychopathy. The soundtrack for each—a nonstop sonic boom, heavy on arena rock and jangling girl-group confections—adds to the jagged frenzy. The tone of The Irishman is substantially more subdued: Pesci’s bespectacled Bufalino affectionately calls Sheeran “kid” and rarely raises his voice; the golden oldies are culled from mellower genres like doo-wop (“In the Still of the Night” plays more than once). 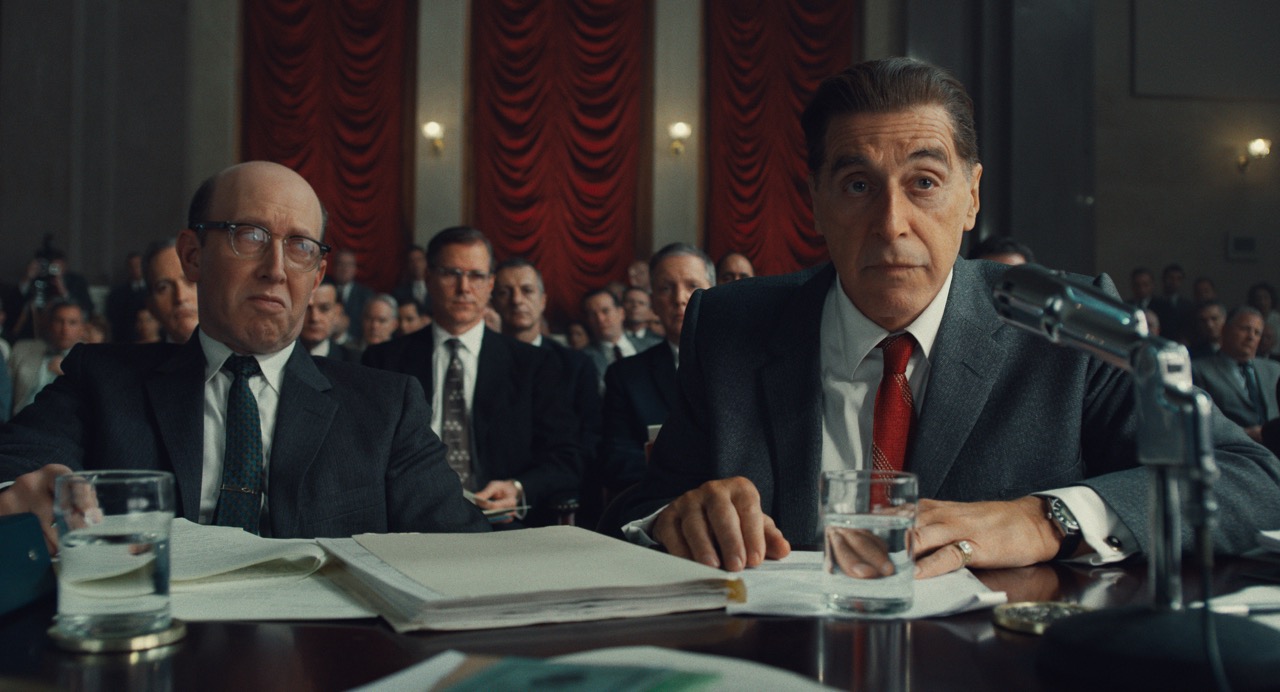 Al Pacino as Jimmy Hoffa (right) in The Irishman. © 2019 Netflix US, LLC. All rights reserved.

The mood may be gloomy, but The Irishman never slides into catatonic solemnity. (Expertly enhancing the sweep and rush of the tumultuous era depicted is Thelma Schoonmaker, Scorsese’s longtime editor.) That’s especially the case after Hoffa, played with blustery bravado by Pacino, enters this three-and-a-half-hour film at about the fifty-minute mark. Looking for muscle, Hoffa, per Bufalino’s suggestion, gives Sheeran—who’d already whacked a few of the capo’s enemies—a call sometime around 1957. (Hoffa’s purported first words to Sheeran, repeated in The Irishman, provided the title of Brandt’s book; “painting houses” is Mafia-speak for “killing.”) “I thought I was talking to General Patton,” recalls a starstruck Sheeran, who’s soon on a Chicago-bound flight to meet Hoffa—and take care of some rival cab companies in the Windy City. 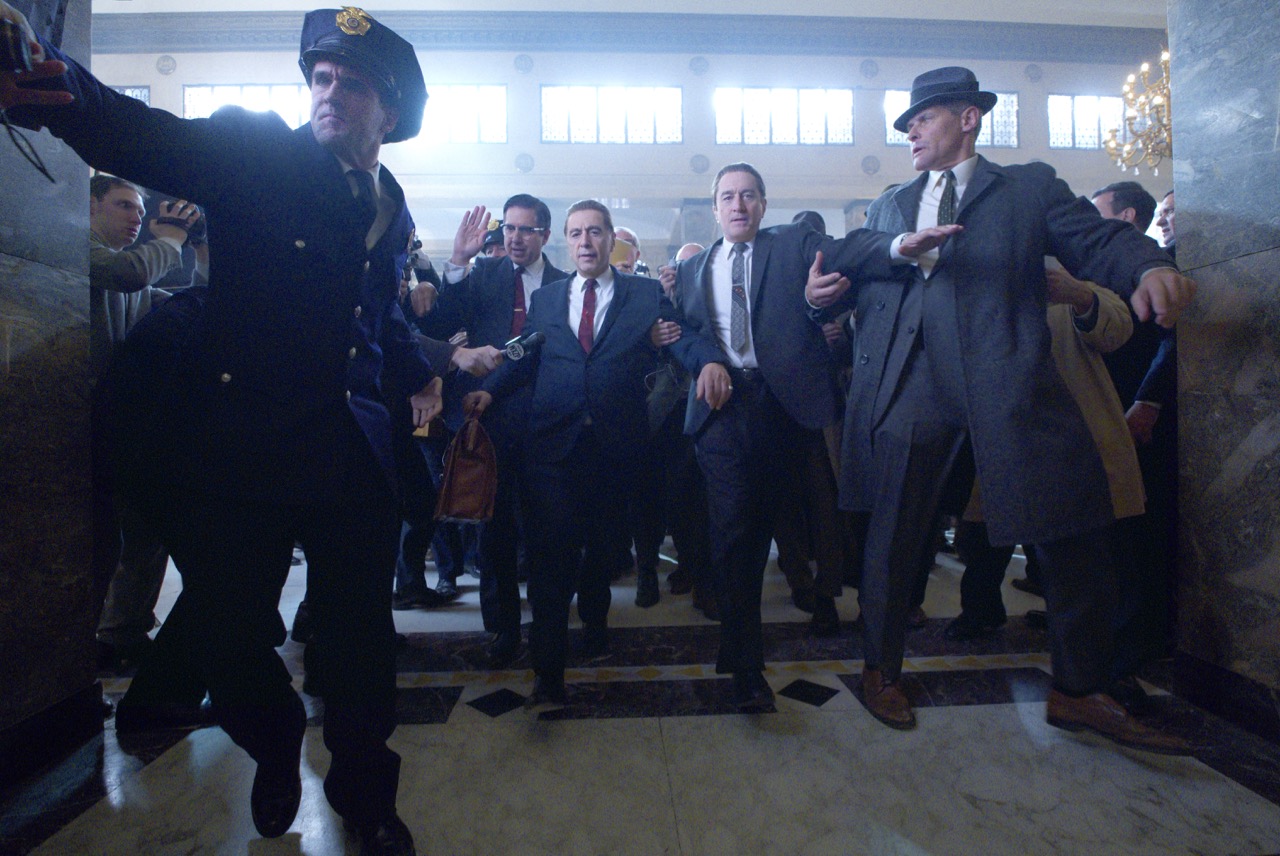 Fulminating in a harsh Midwestern honk (rarely have the short vowels in cocksucker, a favorite word of the Teamsters boss, sounded so caustic), Hoffa is a zealous teetotaler with a sweet tooth, often seen tucking into a hot fudge sundae. These are piquant predilections that Pacino, in his first movie with Scorsese, savors with great gusto; the actor, perhaps American cinema’s paradigmatic ham, is here nothing less than a deli platter of thickly sliced prosciutto crudo. In this instance, I don’t mean those words as disparagement: the ranting, the umbrage, the outsize gestures felicitously suit the enormity of the influence Hoffa once held in this country. “In the ’50s, he was as big as Elvis,” Sheeran says off-screen. “In the ’60s, he was like the Beatles.” 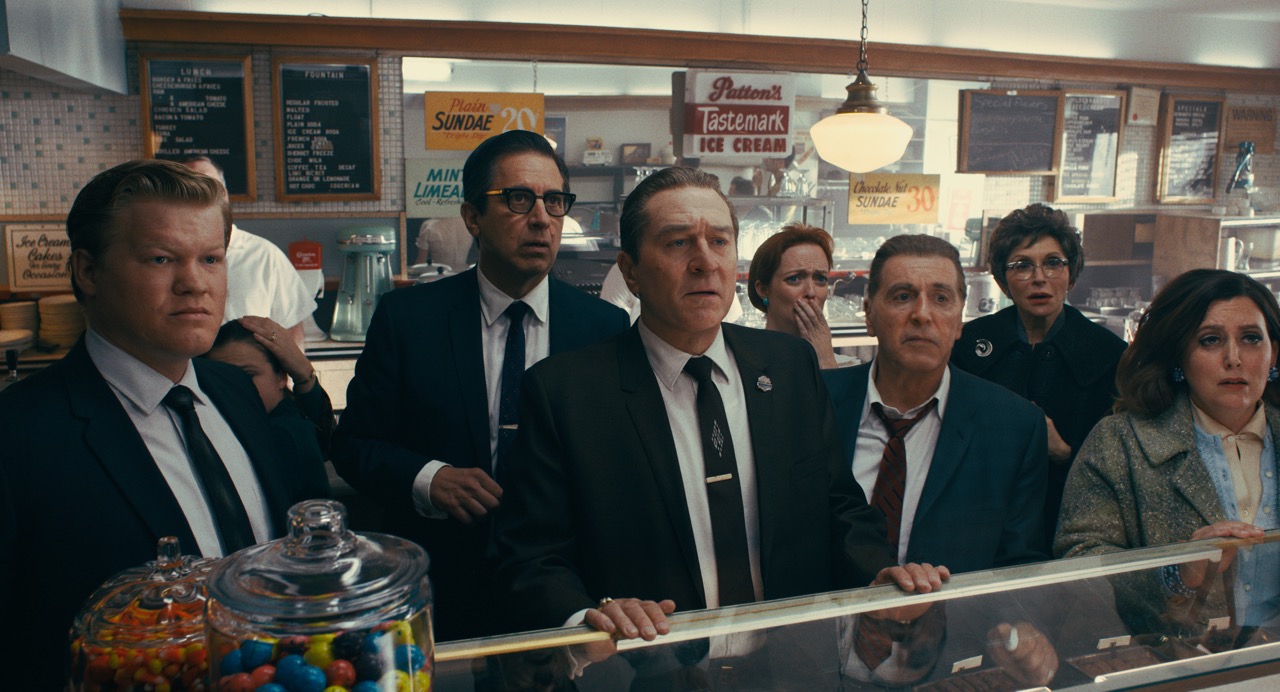 Big, yes, but also small-minded: the tyrannically punctual Hoffa erupts should anyone arrive to an appointment a few minutes late, or, worse, show up in unacceptably too-casual attire, as Teamsters chief and mob captain Anthony “Tony Pro” Provenzano (Stephen Graham), clad in shorts, does during a sit-down in Miami. Enraged that the flag at the Teamsters HQ in DC is flying at half-mast after John F. Kennedy’s assassination—Hoffa was frequently in the crosshairs of the president’s brother Robert, then the US attorney general—the labor leader storms into the building to hoist Old Glory back to its peak.

Scorsese and his cinematographer Rodrigo Prieto (in his third film with the director) return a few times to the words emblazoned on that Washington edifice: INTERNATIONAL BROTHERHOOD OF TEAMSTERS. “Brotherhood” in The Irishman is unsparingly depicted as the feeblest of fraternities; friendship and loyalty are currencies debased to negative value. Occasionally, I wished Scorsese had incorporated more fully the women who orbit these corrupt all-male enclaves, especially Bufalino’s wife, Carrie (Kathrine Narducci), and Peggy, the most vigilant of Sheeran’s four daughters, played as an adult by Anna Paquin. No female role in The Irishman begins to match the succulent parts so vigorously inhabited by Lorraine Bracco in Goodfellas or Sharon Stone in Casino. 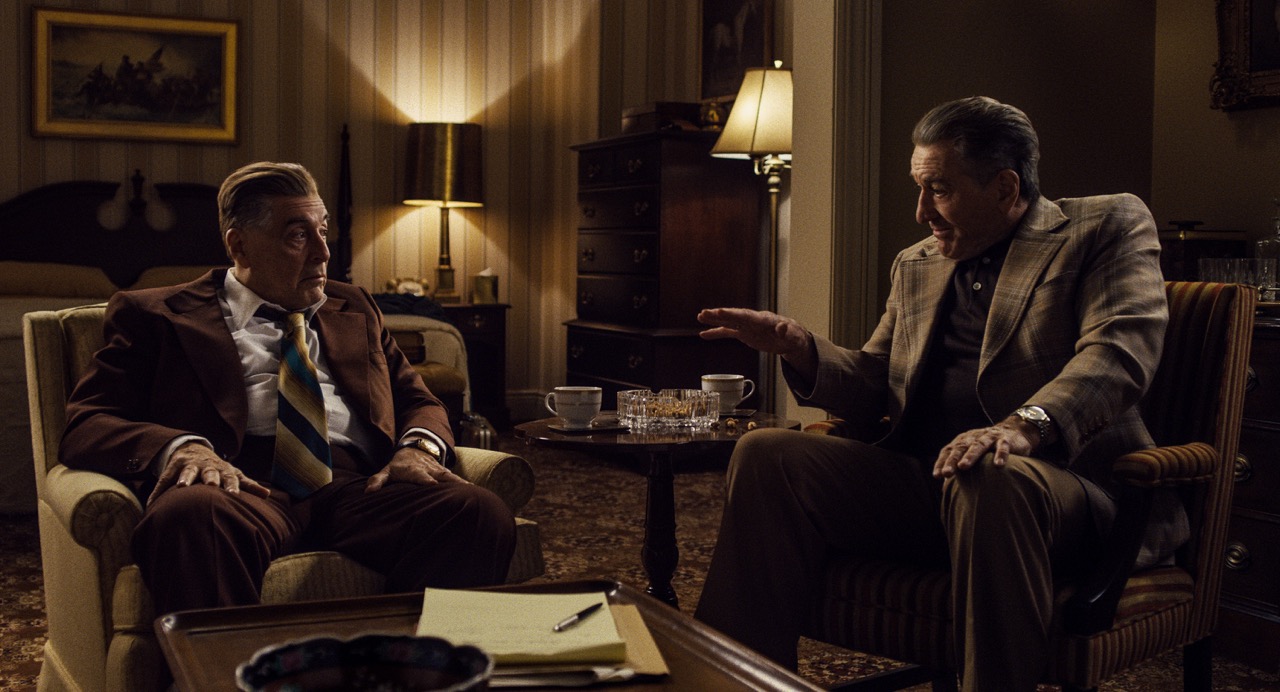 Al Pacino as Jimmy Hoffa and Robert De Niro as Frank Sheeran in The Irishman. © 2019 Netflix US, LLC. All rights reserved.

But the persistent focus on so many men—venal, brutal, vain men—serves a larger, damning purpose. As 4Columns contributor Nick Pinkerton trenchantly wrote in a 2016 appreciation of the filmmaker for Artforum online, Scorsese’s “body of work . . . is an extended study in machismo as a grotesque, disfiguring disease.” In The Irishman, that scrutiny would seem to include the concept of duty, of, in World War II vet Sheeran’s words, “just following orders”—blind obedience to completing a task, no matter how repugnant. Hoffa may have been huge once, but his name barely registers with the young caregiver taking Sheeran’s pulse at the senior center sometime during the Clinton administration. The Teamsters tycoon has faded into obsolescence, much like the ossified codes of manhood that the ally who might have murdered him subserviently embraced.