The Island of Dr. Mandico: the director offers a playfully perverse
new film. 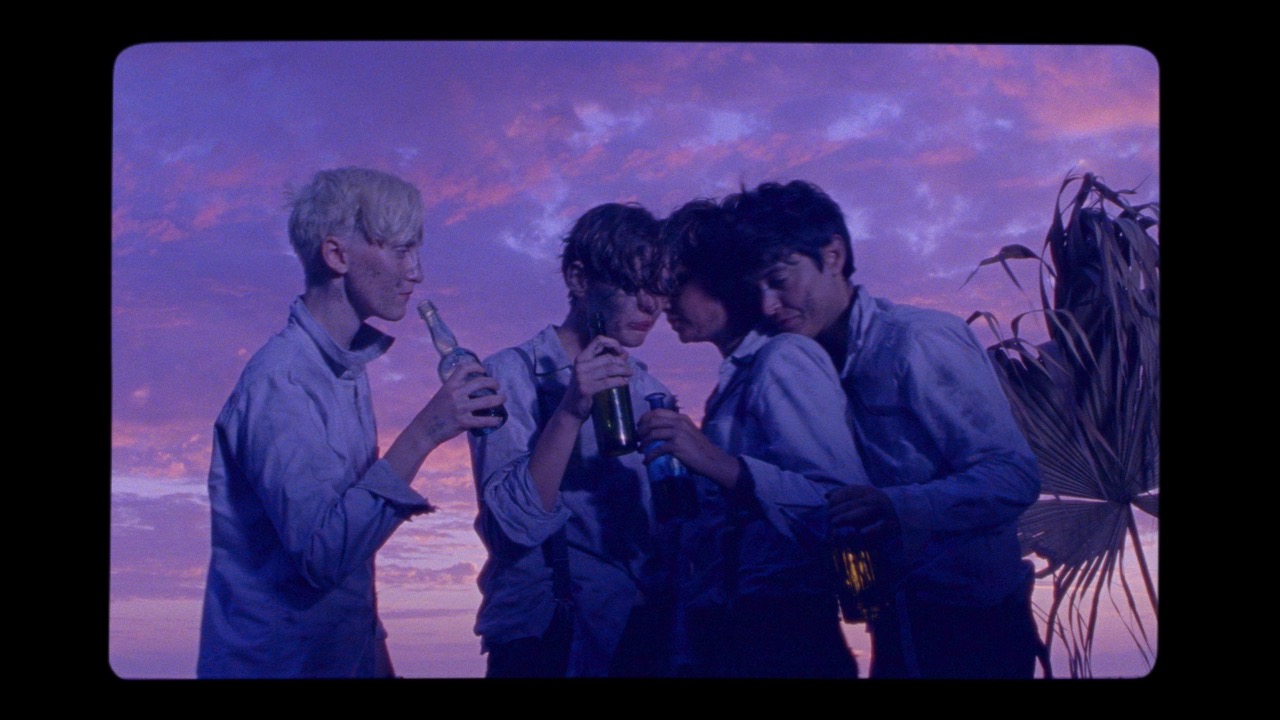 A gender-detonating fantasia that shifts from monochrome to bursts of decadent color—labial pinks, violent violets—and back again, The Wild Boys follows only the imperatives of its writer-director’s glut instinct. This is the first feature-length project by French filmmaker Bertrand Mandico, who, for twenty years, has been making evocatively named shorts: Prehistoric Cabaret, Our Lady of Hormones, Depressive Cop. Although I’ve seen none of them, their titles alone suggest the febrile sensibility that flourishes in The Wild Boys, a sea yarn sodden not only with saltwater but the jizz spurting from those garçons sauvages—who are all played by women. The film is slippery when wet. 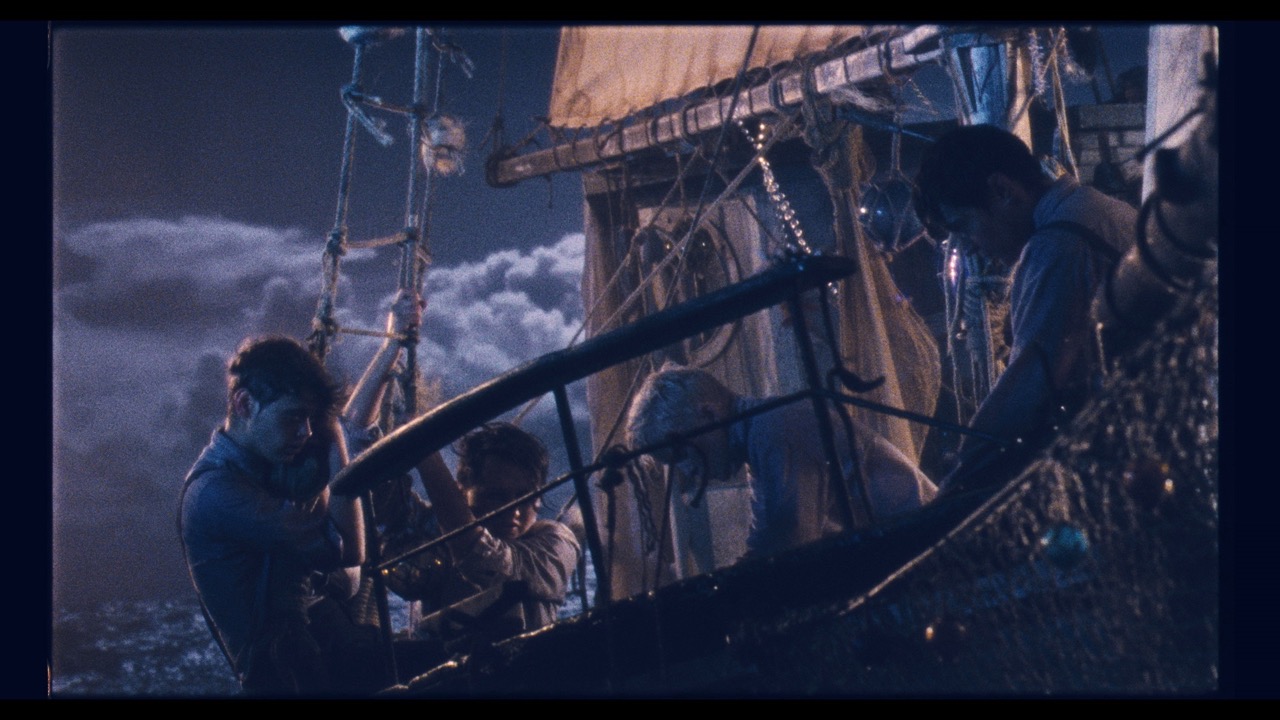 Deliberately, alluringly unstable and destabilizing, The Wild Boys is made even more turbulent by its superabundance of references and inspirations. Set in the 1920s, the movie uses two texts as its scaffolding: William S. Burroughs’s 1971 novel, The Wild Boys: A Book of the Dead, about a band of insurgent, same-sexing striplings, and Jules Verne’s Two Years’ Vacation (1888), a saga of a group of schoolboys stranded on an island. Mandico’s lads are a quintet of adolescent aristo aesthetes and debauchees. After they commit a barbaric act against their beloved literature teacher (played by the great Nathalie Richard, best known for her films with Jacques Rivette and Olivier Assayas), their parents hire a grizzled mariner known only as the Captain (Sam Louwyck) to discipline and domesticate them. 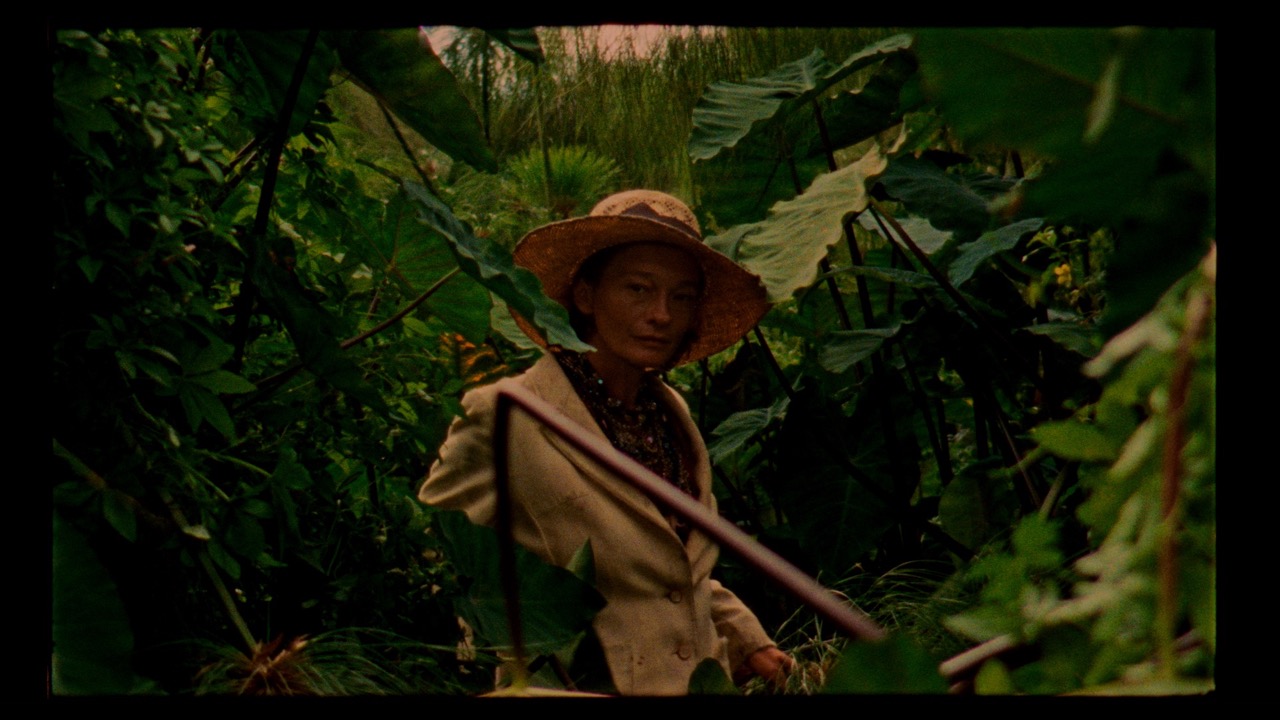 They set sail for an isle—actually La Réunion, in the Indian Ocean—where the Captain’s boss, a mad genius named Séverine (Elina Löwensohn, a frequent collaborator of Mandico’s), has devised a master plan of metamorphosis. The land teems with voluptuous vegetation and viscid goo. The freaky fauna incites all kinds of paraphilic practices among the teens. Ultimately, their genitals, earlier the source of so much defilement, drop pitifully into the sand, resembling dead cephalopods washed up by the sea. Sensing something blooming on their chests, they tear open their white oxford shirts and see ripe breasts. The boys are still wild, though no longer (exclusively) boys. Putative binaries—whether relating to anatomy, gender, or sexuality—deliquesce. 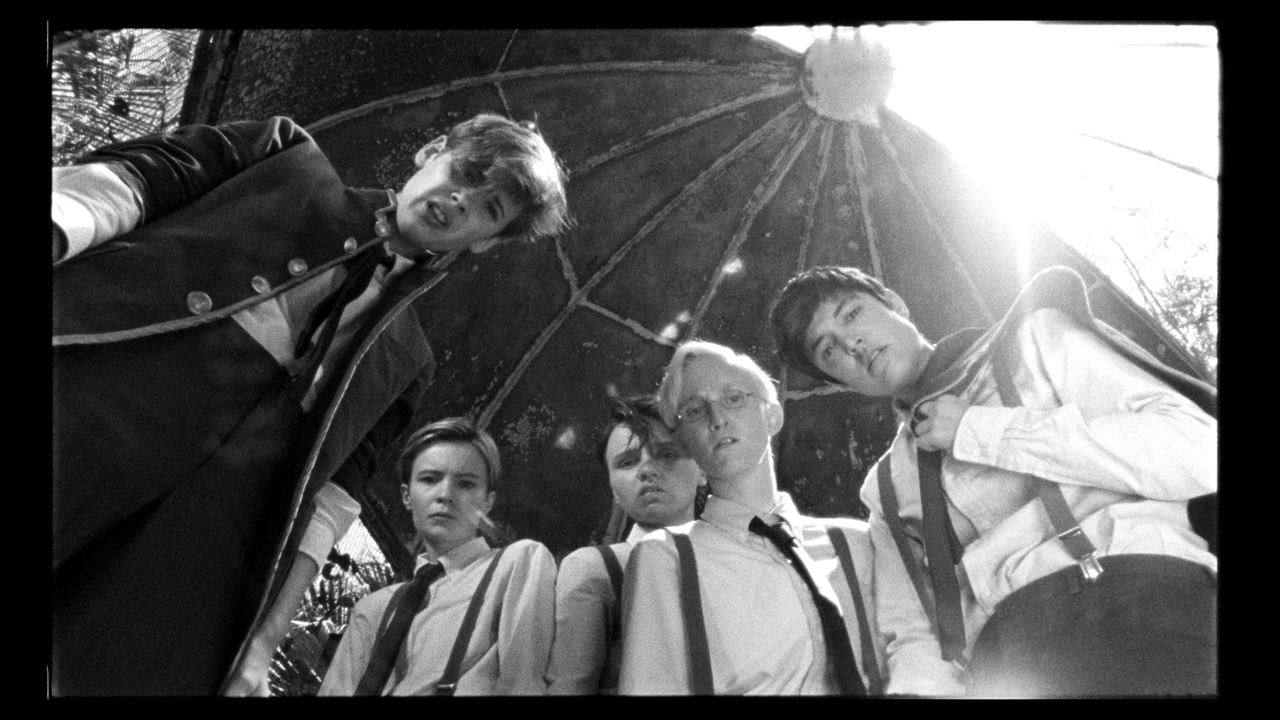 Festooning Mandico’s far-out scenario are segments that call to mind those of the sainted cine-poet Jean Vigo and the queer cinema holy dreamers Jack Smith and James Bidgood; other tableaux in The Wild Boys resemble ’90s TV ads for Calvin Klein’s Eternity. Like its horndog teenagers, the film is promiscuous. The riot of allusions, though, never weighs down Mandico’s movie or depletes the viewer; the film remains buoyant thanks to his keen sense of the absurd. (With its multiple but briskly deployed citations, The Wild Boys shares some of the breezy erudition found in Bruce LaBruce’s similarly anarcho-erotic The Misandrists, which I reviewed earlier this year for 4Columns.) Perverse adornment abounds. The sail of the Captain’s ship is matted with human hair—strands similar to the unruly tangles that sprout from the kiwi-shaped fruits the boys salaciously devour onboard. Tattooed on the shaft of the old salt’s dong is a treasure map. 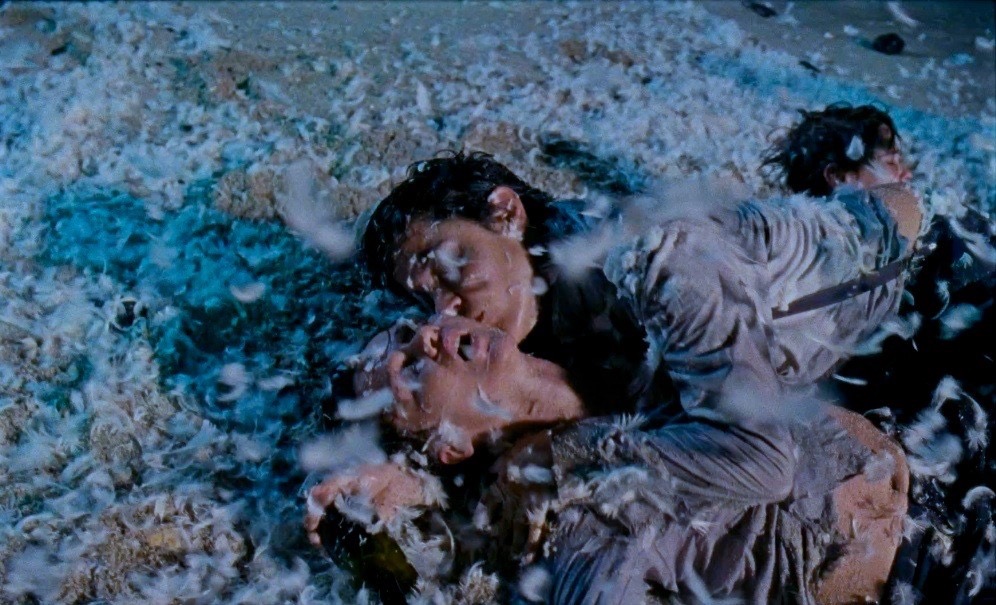 Amid all this bizarrerie, something more serious coheres. The conceit of (cis) women performing as (cis) men in movies isn’t new. One notable predecessor of The Wild Boys is Radu Gabrea’s grimly fascinating A Man Like Eva (1984), an anti-biopic of Rainer Werner Fassbinder starring actress Eva Mattes, a one-time member of RWF’s troupe, as the New German Cinema titan (and a notorious wild boy himself). But what Mandico’s film demonstrates more seductively than any other movie I know that proceeds from this specific kind of gender masquerade is a principle laid out by Parker Tyler, the haut-homosexualist film critic and historian, in his landmark volume Screening the Sexes (1972). In the introduction to that witty, recherché book, one of the first to examine LGBTQ representation in cinema, he writes: “The whole body, not just the sex organ, is an individual’s erotic instrument. The sum total of this human function is to be called the sexual personality. It is the style of this personality, not the incidental sex organ, that determines ‘gender.’ Film is so ideal a medium for expressing this truth because it offers us the human being’s visible presence from head to toe.”

Composed decades before terms like “gender fluidity” entered popular discourse, the words eloquently underscore the limitations, if not the ludicrousness, of thinking of bodies as either/or. We are reminded of the folly of twoness any time the Wild Boys—whether as individuals or a group—fill the frame. Beautiful, arrogant young men played by handsome young women, they constantly derange the concepts of “male” and “female,” scrambling that démodé duality and multiplying it exponentially. 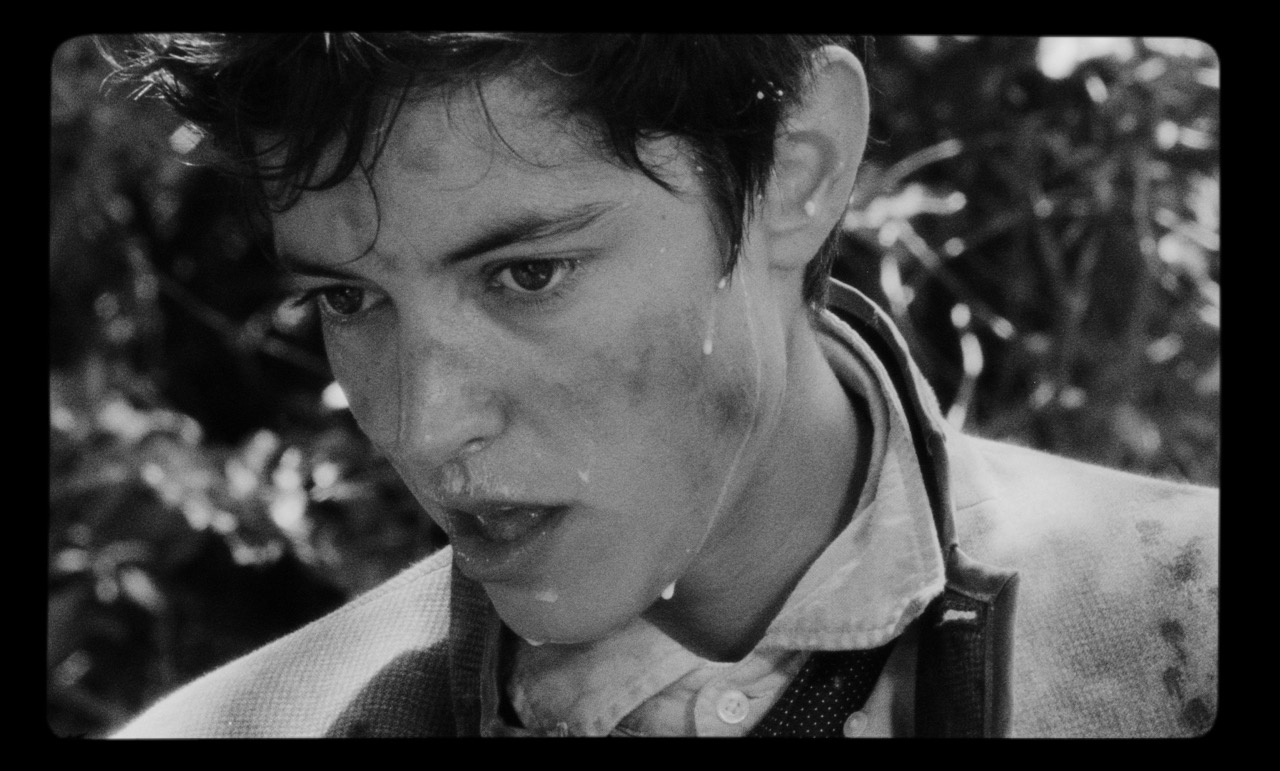 All of the five actresses who portray the haughty libertines exemplify Tyler’s notion of “the sexual personality,” but two in particular stand out. As Tanguy, who provides occasional first-person off-screen narration, Anaël Snoek has the regal bearing of a borzoi and the same kind of besotting amour propre exhibited by Claude Cahun in her most famous self-portrait, in which she appears as a peroxided butch posed in front of a mirror and staring directly at us. (Snoek’s character, of course, shares a name with the renowned Surrealist artist, whose paintings He Did What He Wanted and The Ribbon of Extremes could be alternate titles for Mandico’s movie.) And Vimala Pons—the only performer in the central pentad familiar to me, one whose sly brio thrilled me the first time I encountered her, in the 2013 movie La fille du 14 juillet—is an overwhelming magnetic field as Jean-Louis, the swaggering, snarling Adonis of the group. She—or should I, as Tyler did with the word gender in the quote above, put that pronoun in scare quotes?—continuously rewrites and reratifies the laws of attraction in The Wild Boys, in one scene evoking Brad Davis’s swoony sailor in Fassbinder’s Querelle (1982), in another Charlotte Rampling in SS drag in 1974’s risible The Night Porter, and in others Byronesque screen idols from ancient copies of Photoplay magazine.

Droll, brutal, sexy, strange, The Wild Boys may be partially modeled on a bleak Burroughs text, yet playfulness pervades. Highly stylized, the film is never hermetic. In its plenitude—of inspirations, outré verdure, charismatic performers—it takes me back once again to Tyler. The last chapter of his compendium bears the utopian title “All the Sexes: Their Power and Its Possibilities,” which just might be the best way to describe Mandico’s enthralling movie.