In his follow-up to Get Out, Jordan Peele dives into the horrors of
double consciousness. 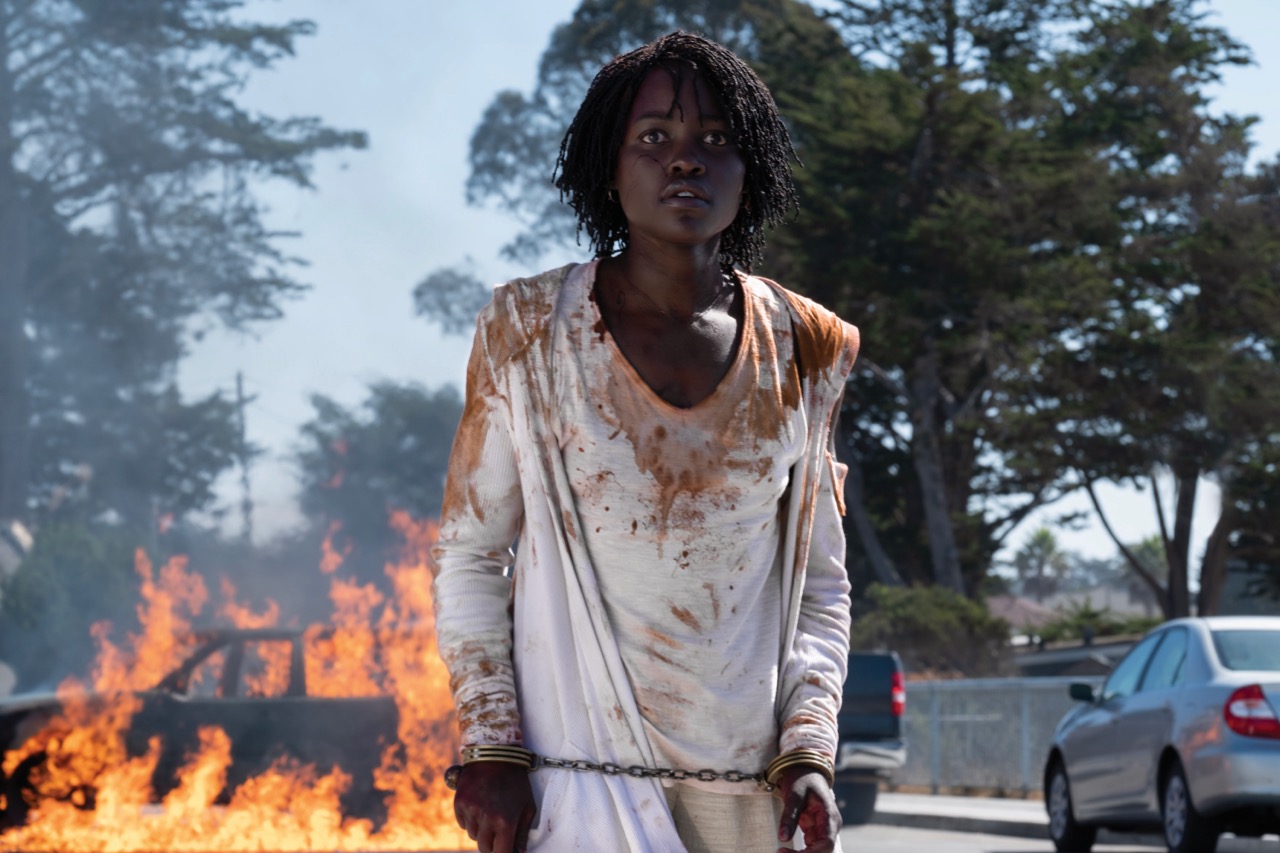 Us, written and directed by Jordan Peele

The titles of Jordan Peele’s two movies to date are as potent and compact as a fist. With ingenious economy, the names announce the concepts animating each film. The imperative in Get Out (2017)—a sharp thriller–social satire centering on Chris (Daniel Kaluuya), a young black man who quickly notices the sinister oddities of his white girlfriend’s “liberal” parents, whom the couple are visiting for a weekend—has a dual meaning. It not only recalls the baleful commands of racists determined to protect their hotbeds of hate (the very kind of Caucasian supremacist Chris’s hosts would abhor and loudly, smugly define themselves against) but also serves as the audience’s urgent wish for the protagonist to escape an increasingly diabolical scenario. The terser, even more evocatively titled Us shrewdly parses the object pronoun, weaponizing it in the process. More than the warmth and security afforded by communal ties, the two-letter word connotes revulsion—the unease aroused by staring too long into the looking glass.

Unlike Get Out, a mélange of a few different genres, Us adheres to one idiom, the horror movie. Yet the films share a key structural device: a terrifying pre-credits opening sequence. Get Out begins with a black man trying to find an address on an eerily deserted suburban street at night; a car tails him as a 1930s British music-hall number, “Run Rabbit Run,” blares from its speakers. The jaunty, tinny ditty is a macabre soundtrack to an abominable act soon to be committed against the newcomer. 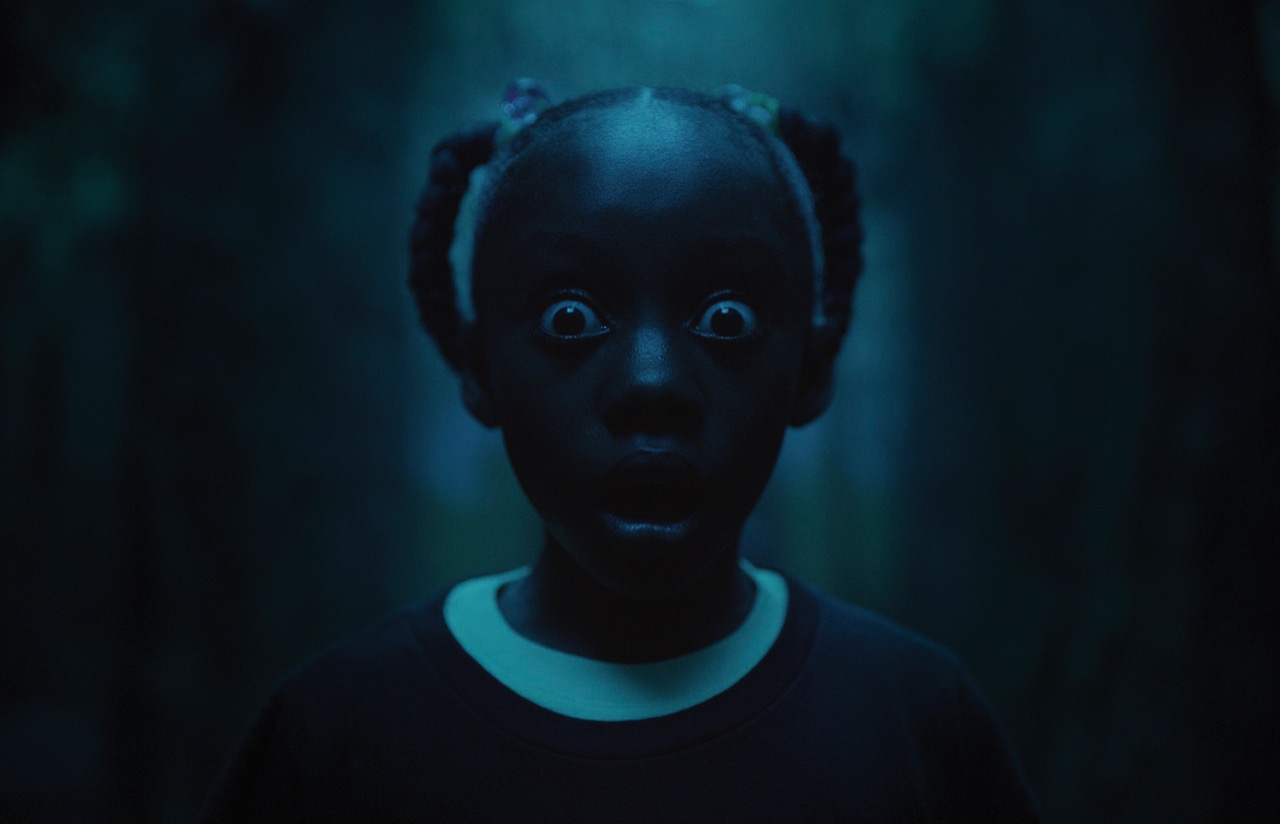 The prelude to Us is more elaborate, stranger, and more distressing. Following an intertitle that informs us of the existence of “abandoned subway systems” and “deserted mine shafts,” many having “no known purpose at all,” the film cuts to a television set, visibly reflecting the little girl (Madison Curry) watching it. She appears overwhelmed by a PSA for Hands Across America, the 1986 benefit (later revealed to be a boondoggle) to fight poverty. Sometime during the year of that campaign against hunger and homelessness, the California grade schooler and her parents attend the amusement park at the Santa Cruz boardwalk; the pigtailed child drifts off and enters a haunted house/hall of mirrors. There she encounters, among her own image returned back to her multiple times, her double—a realization that prompts a look of fear on the girl’s face so fathomless that I’m still, as I write this two days later, struggling to crawl out of the abyss of abject dread it conjured.

Peele ends the prologue—which almost ended me—just as her eyes widen and before she lets out a scream. Formally, there’s nothing particularly novel about this setup and the girl’s response, which immediately calls to mind a similar reaction by the Big Wheel–riding moppet played by Danny Lloyd in Stanley Kubrick’s The Shining, the 1980 chiller that’s one of several horror touchstones Peele nods to. But the fact that it is a black child who is so traumatized—by her own duplicate, no less—provocatively points to the pathologies upon which this country was built and that continue to sicken our ailing republic. 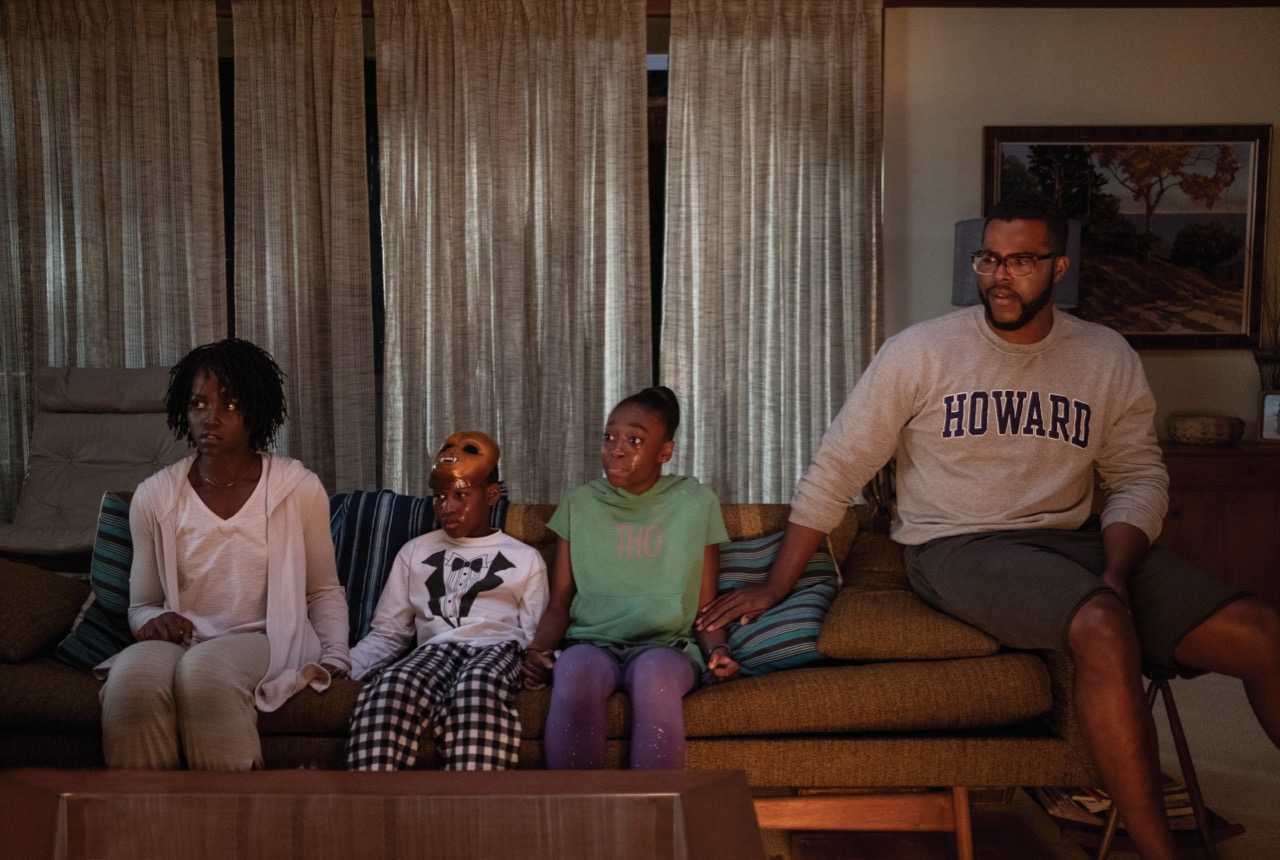 For the first half of Us, Peele brilliantly keeps all plates spinning, both sustaining often unbearable levels of tension and advancing discomfiting ideas. After the credits—which are accompanied by foreboding images of bunnies in cages (run, rabbits, run)—the film is situated in the present day. The little girl from the beginning sequence is now the adult Adelaide Wilson (Lupita Nyong’o). When we first see her, she is en route with husband Gabe (Winston Duke, who costarred with Nyong’o last year in Black Panther), teenage daughter Zora (Shahadi Wright Joseph), and prepubescent son Jason (Evan Alex) to their family vacation home—not too far from the beach where wee Adelaide suffered so much anguish. Grown-up Adelaide begins to reel from flashbacks to that harrowing episode from thirty-plus years ago, though she’s calmed somewhat by her loving spouse and kids. 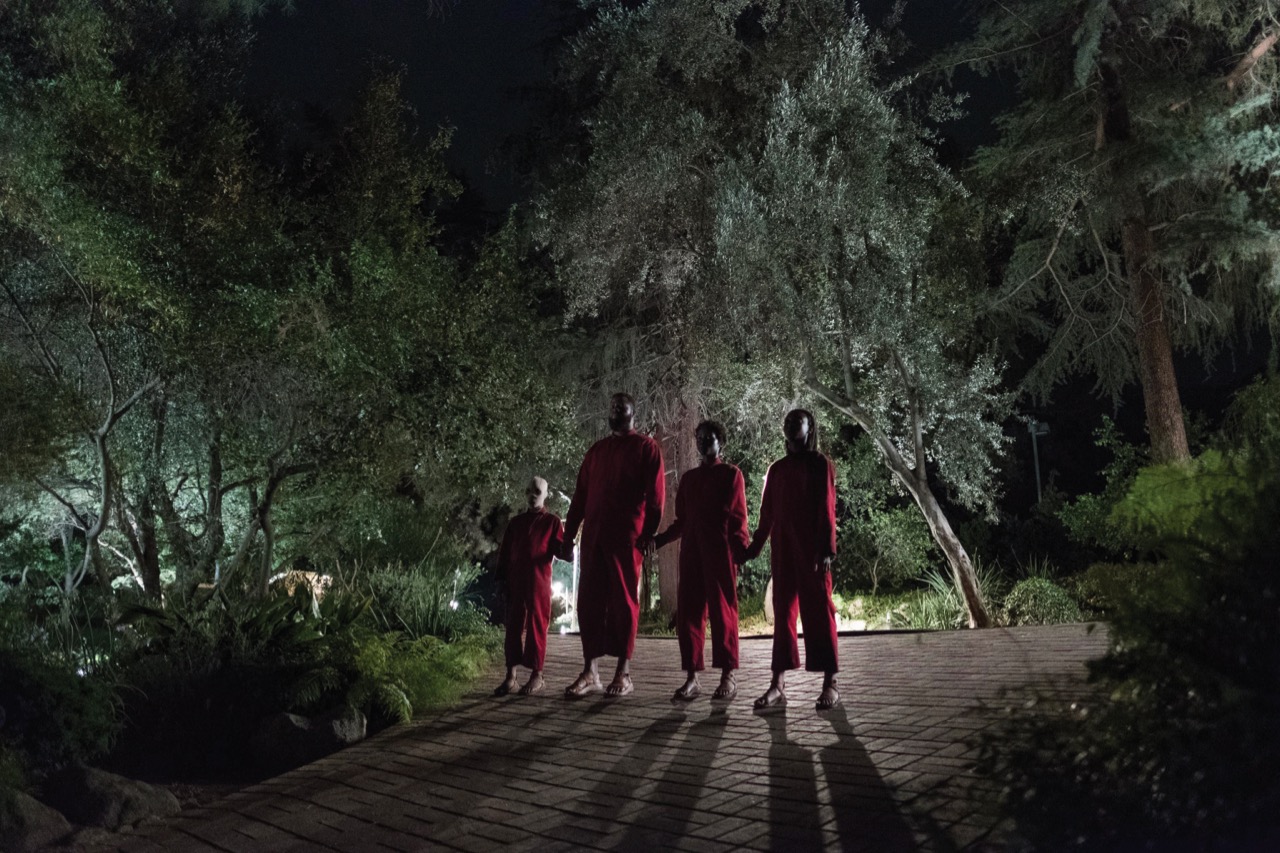 But not for long. On the first night of the Wilsons’ holiday, an unknown foursome stands stock-still in their driveway, linked as if in a grotesque parody of Hands Across America. Outfitted in cerise jumpsuits, they are the monstrous, murderous doppelgängers of each member of the Wilson tribe—and played by the same actors. This twinning is especially unnerving with Adelaide, whose shadow self, known as “Red,” speaks in an infernal wheeze that sounds like Beelzebub’s bellows. “What are you people?” Gabe desperately asks. Red’s reply scalds: “We’re Americans.”

In forcing the comfortably middle-class Wilsons to confront these wretched versions of themselves, replicas bedecked in the attire of the carceral state, Peele seems to lay bare the tremendous anxiety among the members of this family to maintain “respectability,” that odious burden so essential to racism’s armature. Watching these scenes, I thought of one of the more enduring skits from the eponymous 2012–15 sketch-comedy show Peele created with Keegan-Michael Key: Obama (played by Peele) and Luther (Key), the president’s “anger translator,” who reinterprets Barack’s unvaryingly equanimous responses in any situation as a paroxysm of street slang and bravado.

When Us stops focusing on the psychic toll of double consciousness—that is, after we discover the scope of the evil-clone invasion—the film slackens. (I thank my seatmates at the Forty-Second Street multiplex where I saw Peele’s film who yelled “Just drive, girl!” and “So stupid” for succinctly voicing the exasperation produced by the more haphazardly devised sections—when, in other words, the movie becomes Us, weakly.) But even these dips are mitigated by a uniformly excellent cast, which includes Elisabeth Moss and Tim Heidecker as a floridly passive-aggressive white couple who are friends of the Wilsons. 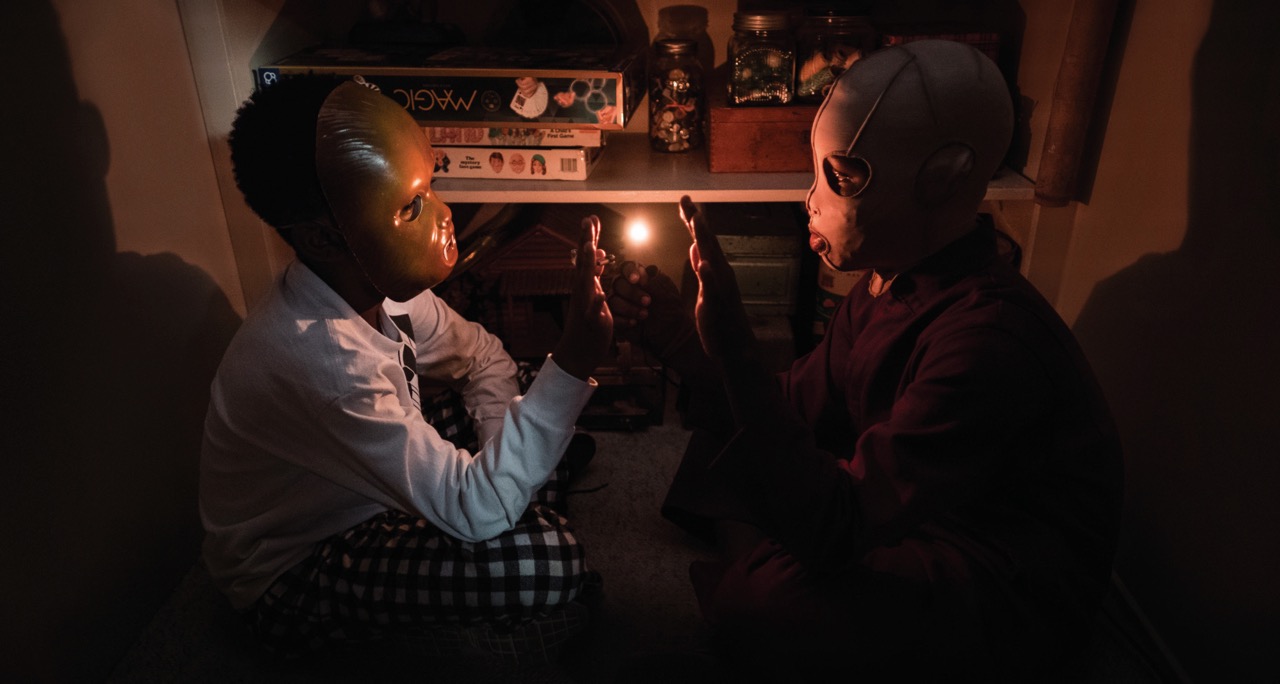 Us closes with a knockout shot, scored to a psychedelic-soul deep cut. This outro provides a putative answer to Jason’s earlier guileless query to his mother: “How many of everybody is there going to be?” Beyond its bizarre syntax, the question lingers in the mind—perhaps because it’s asked by a boy who, never without his Chewbacca mask, has learned, even before the attack of the (un)dead ringers, that his own well-being necessitates an alter ego. Or is it concealment?