The void within his soul: six seasons of the animated Netflix series. 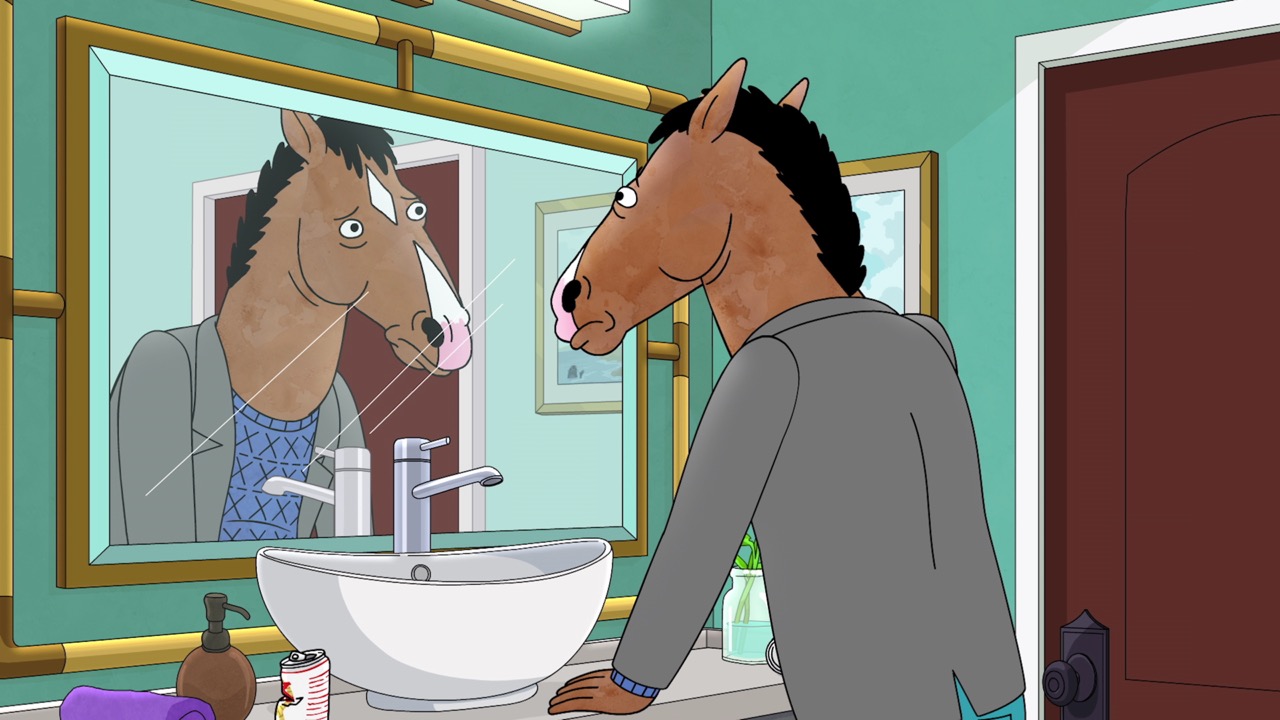 Editor’s note: In light of the fact that movie theaters in New York City, where 4Columns is based, and other cities throughout the US remain closed during the coronavirus pandemic, we have invited our contributors to revisit films or television shows that are particularly significant to them and that are easily found online.

“Back in the ’90s I was in a very famous TV show,” goes the BoJack Horseman theme song. The eponymous central character is a celebrity horse (voiced by Will Arnett) in a world where animals and humans live together in realistic, lightly anthropomorphized disharmony. A blowhard TV anchor whale spouts excitably from the top of his head. A femme fatale spider draws BoJack into a web of intrigue involving a shady strip club staffed by sexy orcas. A camo-clad deer wearing headphones stands obliviously in the path of an oncoming car. 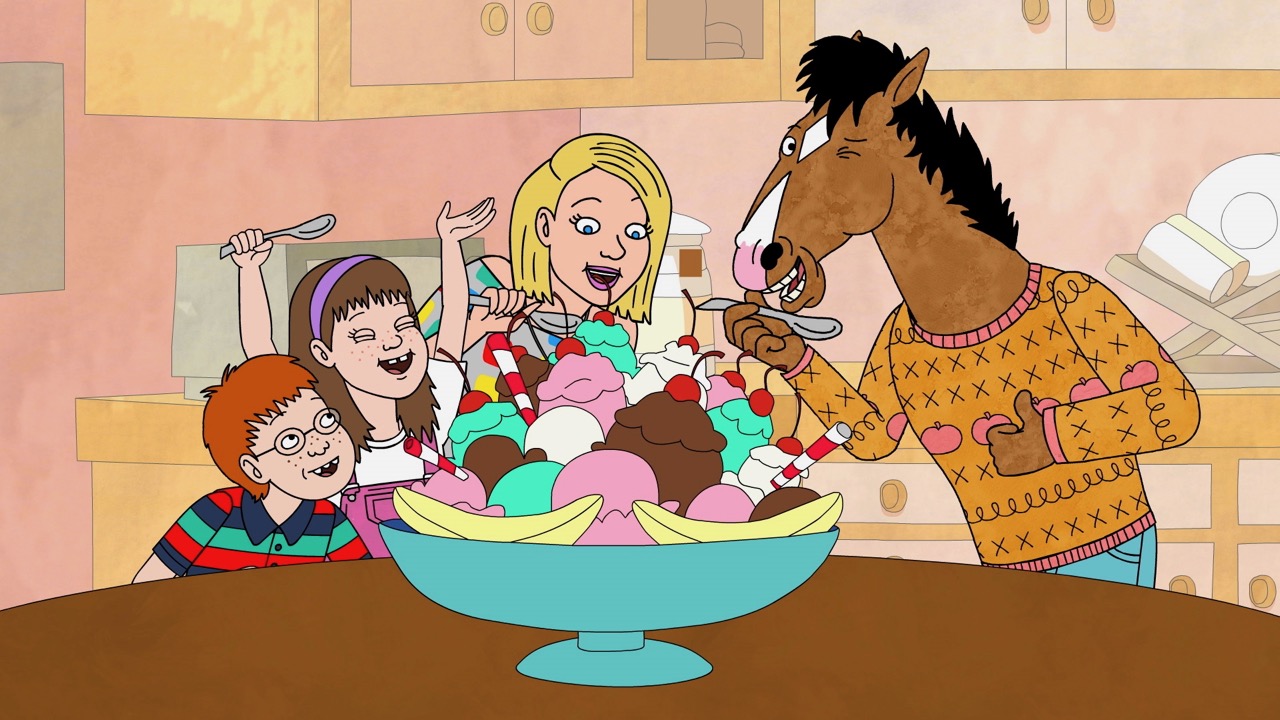 The cast of Horsin’ Around in BoJack Horseman. Image courtesy Netflix.

At the start of the Netflix series, BoJack has done nothing since his starring role in the corny sitcom Horsin’ Around ended eighteen years ago. Over the six seasons of BoJack Horseman, he experiences a comeback via a tell-all memoir, wild controversies, and movie roles. But none of this does anything to fill the void within his soul. This void is the true, non-anthropomorphized subject of the series. In the penultimate episode, it appears as pools of annihilating black tar. 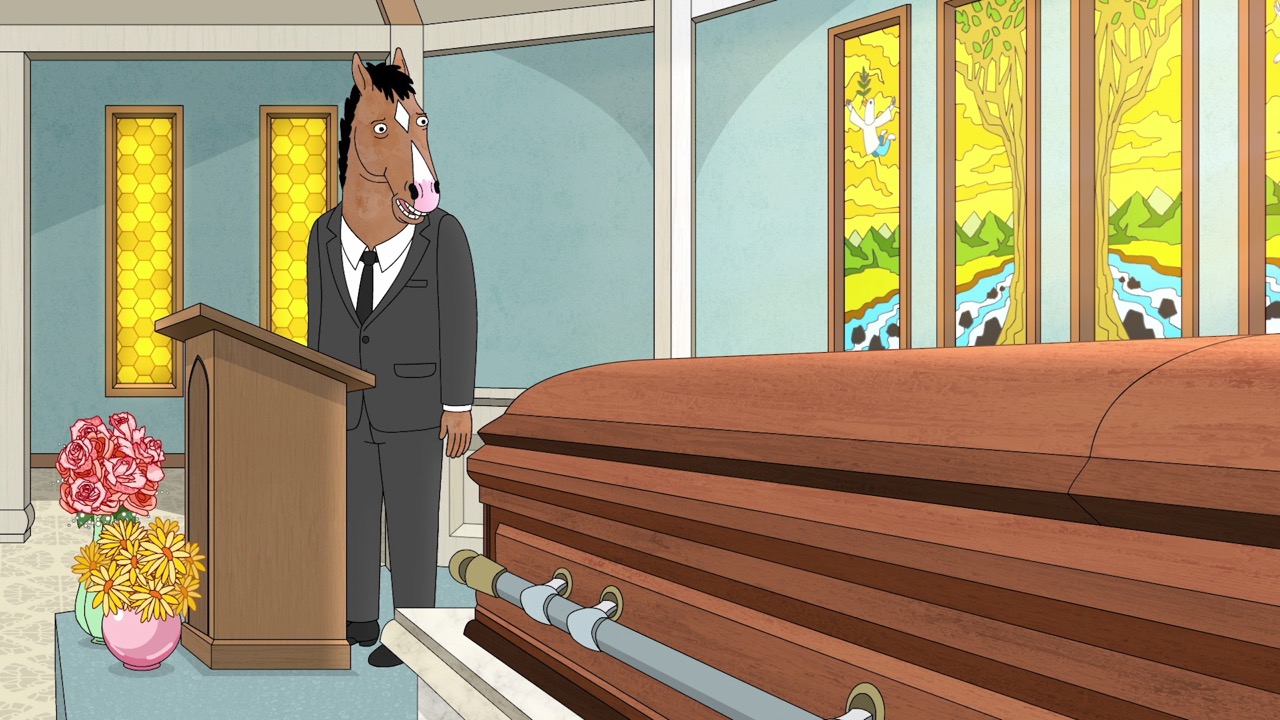 Watching BoJack in a period of painful personal chaos just preceding the painful impersonal chaos of the pandemic, I was provoked and comforted—amused, I guess—by the familiarity of his sadness. BoJack frets about whether or not he is a good person: he is not. He is funny, charming, gluttonous, contemptuous, and fucked up. In a flashback scene, young BoJack offers his father a card in the shape of a heart that he rejects as “shoddy craftsmanship.” In a virtuosic episode consisting entirely of BoJack’s funeral eulogy for his mother, he confronts, through a goofy pun on “Intensive Care Unit,” her now forever-unfixable inability to care for him. 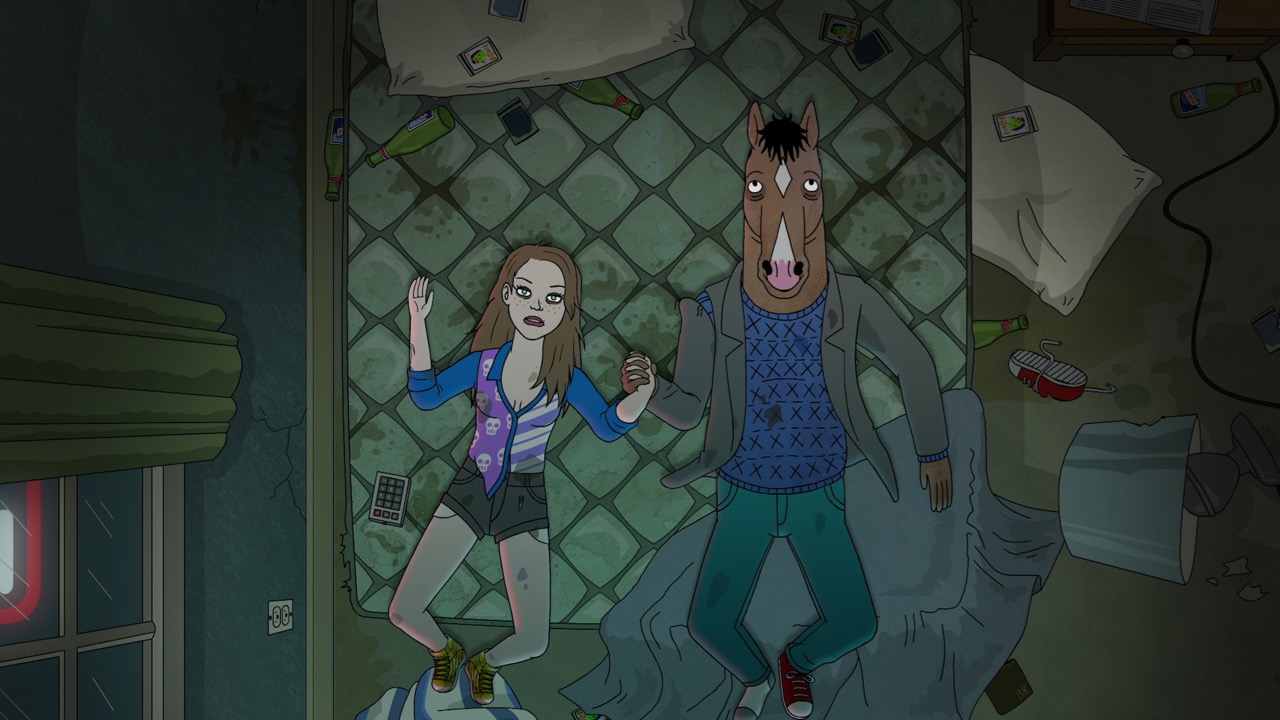 In the first season, BoJack and his former TV daughter Sarah Lynn (a human) try to recreate their fictional bond after she nearly dies of an overdose. The scenes in which they lurch from clumsy father-daughter role-play into a sexual relationship accurately evoke the awful thrill of boundless self-destruction. Both are wounded and transfixed by Horsin’ Around’s crass image of family life. This depiction haunts their lives not only as the source of their fame but as the toxic dream of perfect love with which mainstream culture constantly maligns reality. 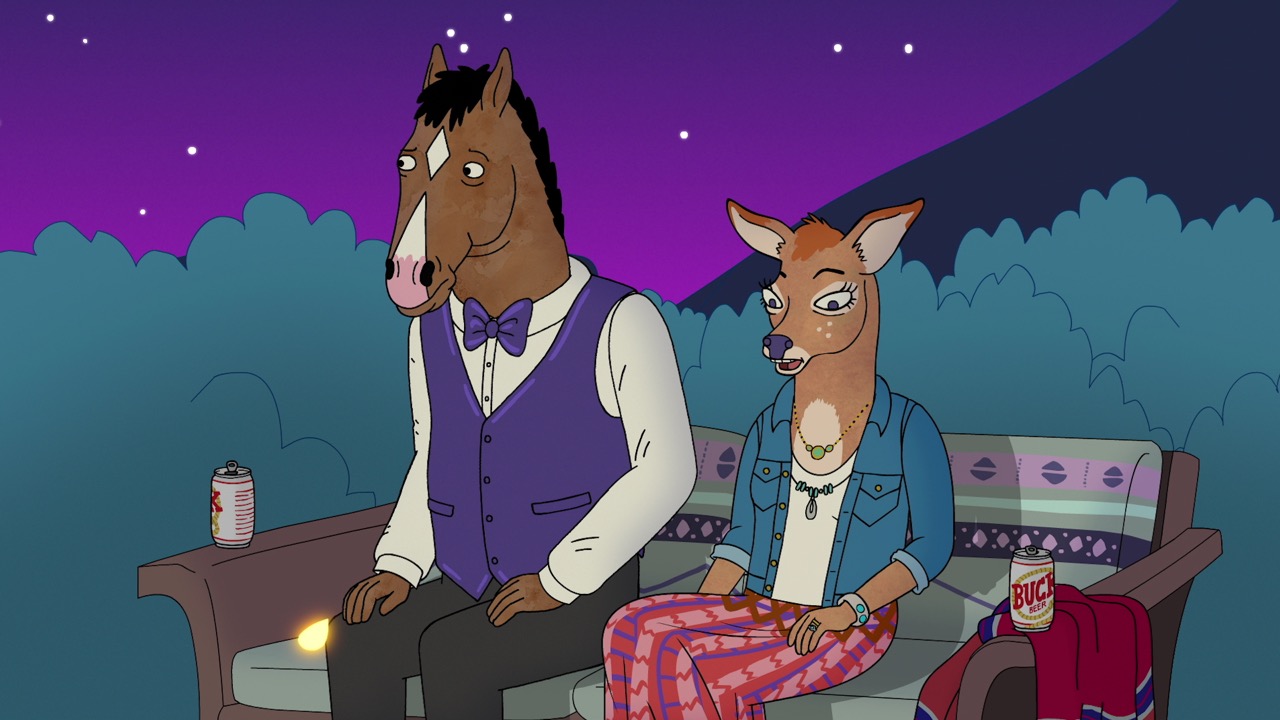 “It’s not Ibsen” is all BoJack’s mother has to say about Horsin’ Around, but BoJack Horseman evokes Halvard Solness’s despair in The Master Builder: “Nothing, nothing! The whole is nothing!” BoJack compulsively consumes proxies for intimacy: drink, drugs, arguments, sex. In moments of panic, he attempts to commit to comically unsuitable partners: an owl TV executive recently recovered from a thirty-year coma; an ambitious human publicist trying to help him fake his way to an Oscar. These partners don’t really get him, but that’s the point: they briefly seem to promise a shiny new version of his life, scrubbed clean of himself. An attempt to rewind twenty years back by reconnecting with a former crush (a deer) results in a catastrophic chain of events that, over several seasons, strips him of everything he ambivalently loves. 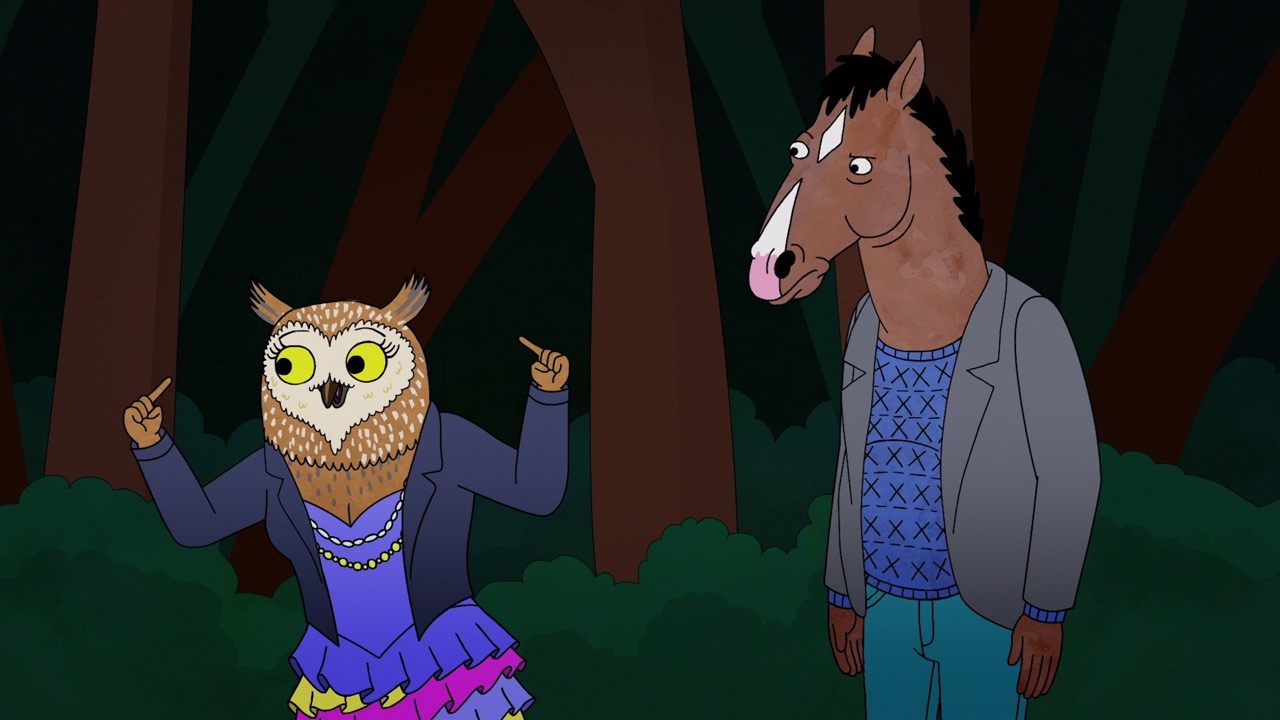 His long-suffering agent and sometimes-girlfriend Princess Carolyn (a pink cat) and his ghostwriter and friend Diane (a human) love him as he is. This has mixed results because BoJack hates who he is. Diane and BoJack hover around the possibility of a romance, but the moment never arrives because it would involve their deep mutual recognition, which Diane finds difficult and BoJack can hardly bear. Love frightens the horse. When he accidentally tells Wanda the owl that he loves her, he immediately adds “No I don’t!” and runs away. He spends the rest of the episode in a ploy to get Wanda to admit she loves him too.

This episode is one of the few to center on a black human character, though some of the animal characters—Diane’s bison boyfriend, the dragonfly neighbor who helps BoJack fix up a dilapidated summer house—talk and act like black people. And so it is strange, to say the least, that this episode’s plot focuses on the black character’s addiction to autoerotic asphyxiation, leading to an accidental hanging. The resonance of lynching is there, but in a kind of dumb, uninterpretable way, as if it just seeped up aimlessly from the collective psychic substrate into the writers’ room. 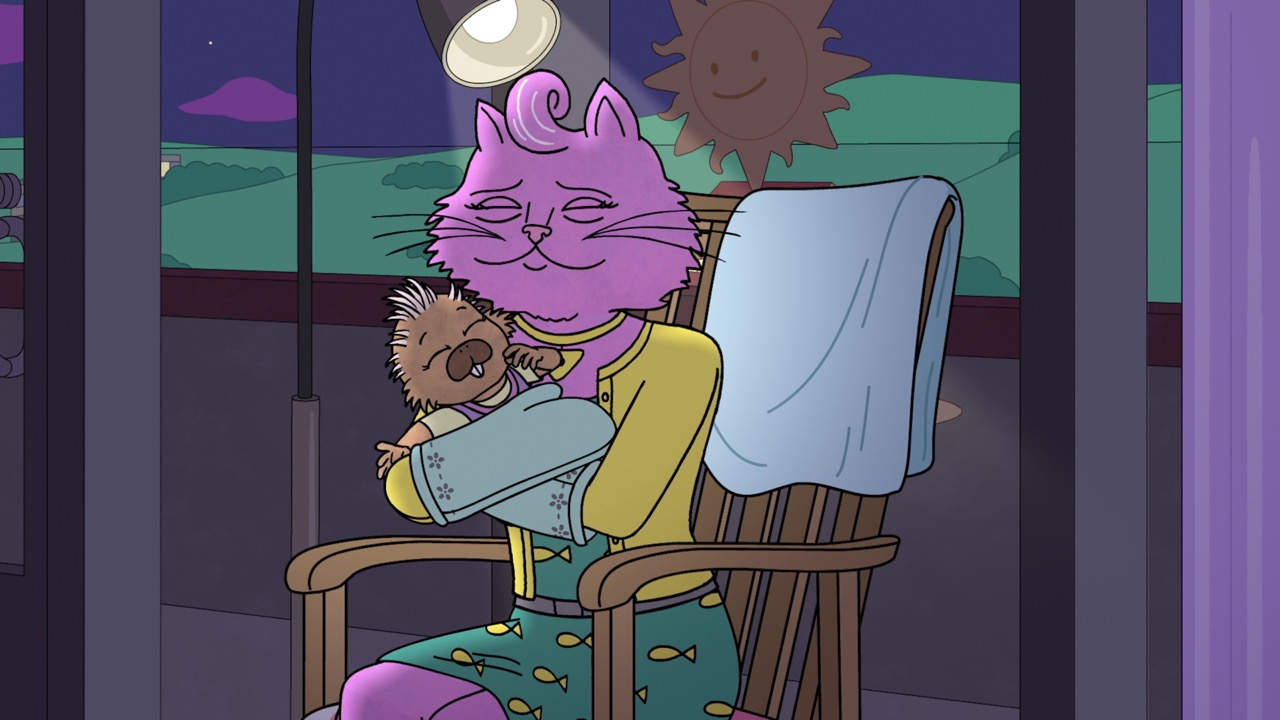 In the world of the show, race exists both in the conventional human sense and also as species attributes. “I’ll give you some pages that’ll knock your ass back to the south pole,” BoJack tells his penguin publisher, who responds icily, “I’m from Cincinnati.” Any animal can have sex with any other—a cat and a spider, a human and a dog, a horse and an owl—and they can conceive: Princess Carolyn’s adopted baby is the result of a relationship between a human and a porcupine. Animals of every kind can talk, but they are also eaten, a disturbing situation that is explored in an episode in which BoJack and friends try to help an escaped chicken. Another black-but-not character, a diner-waitress cow, glares at a customer as she slings a steak onto the counter—I thought of Frank Wilderson’s provocative reimagining of “the Negro question” as the “cow question.” When Diane’s human father dies, her brothers (three humans and the black sheep of the family, literally) have his body ground and canned, like a food animal. In the world of the show, everyone is both human and animal, and so race is both everywhere and conceptually absent. 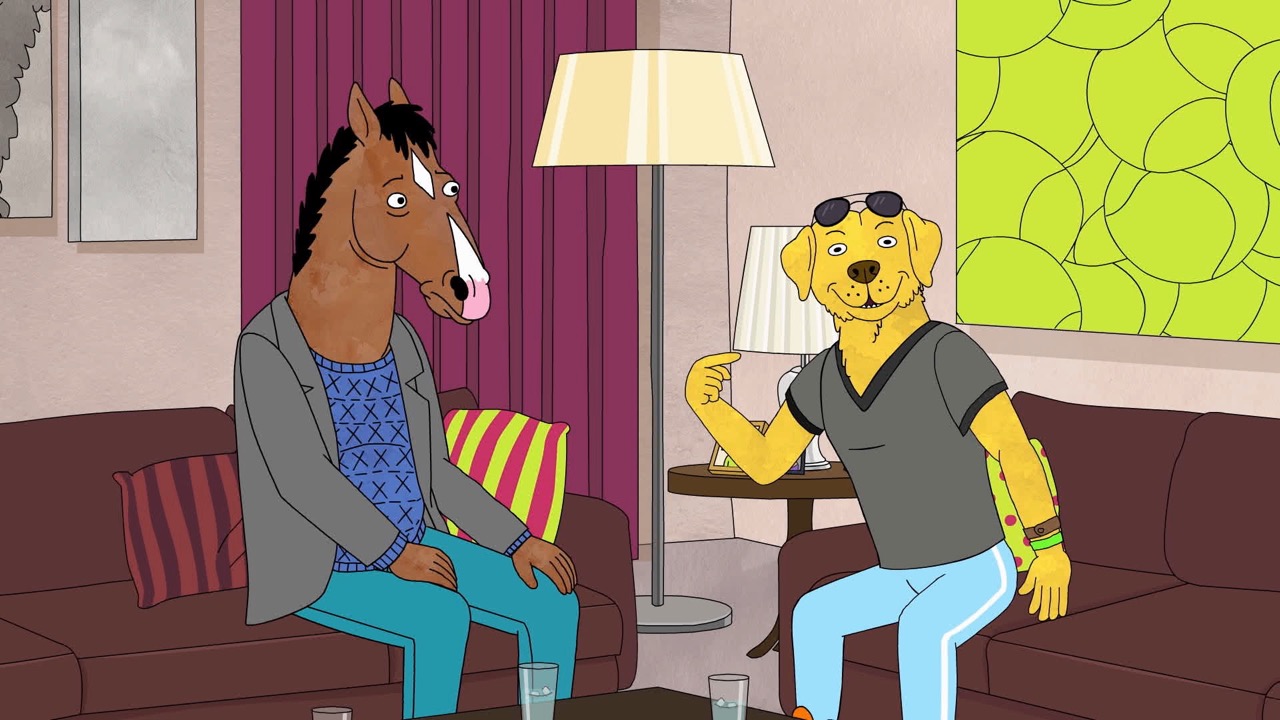 I binged BoJack during a lossy time in my life—its characters also learn the lessons of loss, even BoJack’s ever-cheerful golden retriever nemesis Mr. Peanutbutter. Although he is a good dog, he too has to learn not to torment himself and others with a false image of perfection. I watched to absorb a truism in digestible cartoon form: the more we flail around trying to avoid the pain of loss, the more we lose. 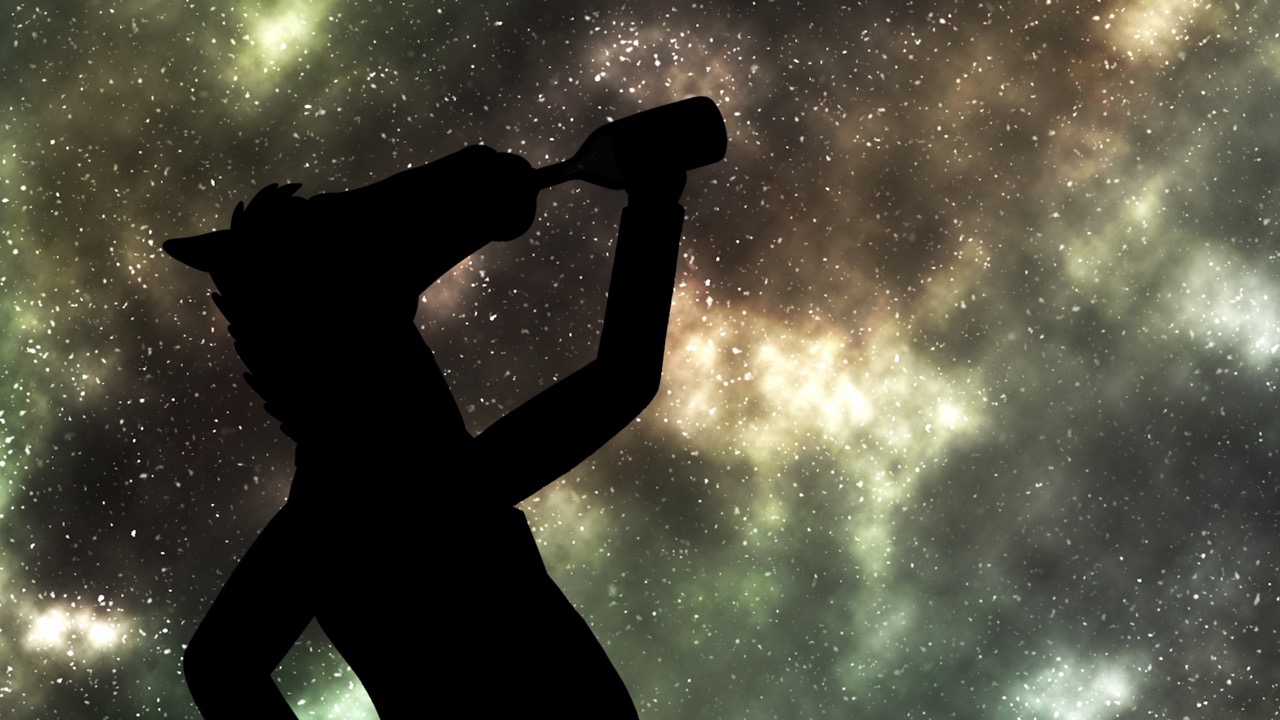 Many TV shows focus on youth, but BoJack Horseman is about midlife, about what happens when your coping strategies wear thin, when your schtick calcifies, when it just isn’t cute anymore. At the end, the show austerely refuses redemption, or even the release of death—though it takes us as far as the afterlife to make the point that the only escape from your sorrow is facing up to what it has wrought.

Hannah Black is an artist and writer from the UK. She lives in New York. She has previously written for Artforum, the New Inquiry, Afterall, and a number of other publications. Recent exhibitions include Ruin/Rien at Arcadia Missa in London and Dede, Eberhard, Phantom at Kunstverein Braunschweig near Berlin.