An exhibition celebrates the artist as insect. 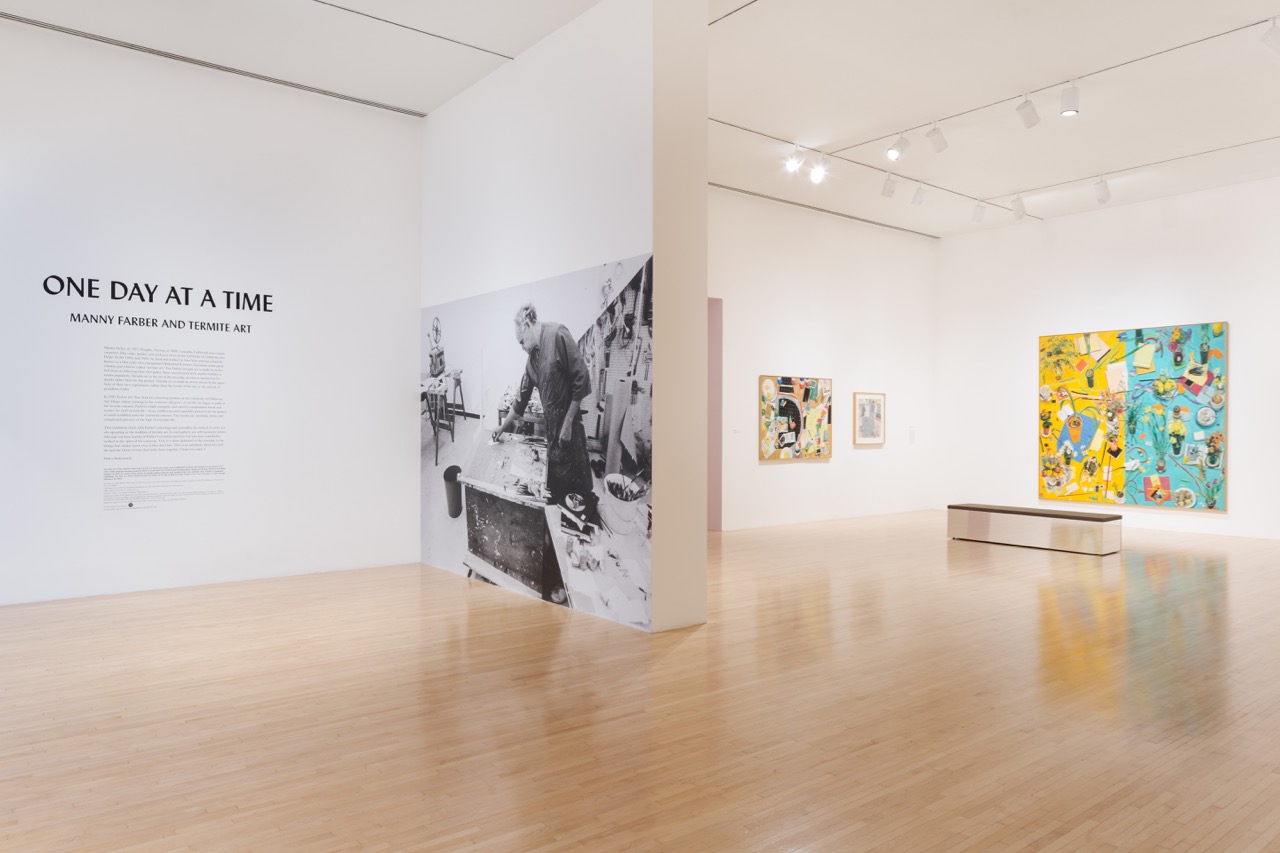 A hunk of pale cheese, silver herring on a pewter plate, a glass of ale. In the early seventeenth century, back when the Dutch East India Company was barely a start-up, monochromatic portraits of simple, quotidian fare, popularized by painters like Pieter Claesz, were called ontbijtjes, or breakfast pieces. A few decades later, the world’s first megacorporation had come to dominate global trade and Claesz, like other artists, moved on from modest still lifes to sumptuous banquets pieces—banketjes—the better to flaunt the new consumerist society’s colonial spoils with glistening red lobsters, blue-and-white porcelain, exotic spices, and, more often than not, a freshly peeled lemon imported from the Mediterranean, its expensive flesh exposed and gleaming.

Three centuries later, Manny Farber was picking lemons from his own tree and painting them in his home in Southern California. Born in 1917 in Arizona, Farber worked as a painter and a carpenter before taking a job in 1942 as film critic for the New Republic. In 1970, with, painter Patricia Patterson, his girlfriend at the time and later wife, Farber moved to California to teach at UC San Diego and devoted himself to his students and art. He passed away in 2008 at ninety-one. The still life, including Farber’s exuberant contributions to the genre, is one of the central elements in One Day at a Time: Manny Farber and Termite Art, the Museum of Contemporary Art, Los Angeles’s group exhibition inspired by the late artist, writer, and teacher. 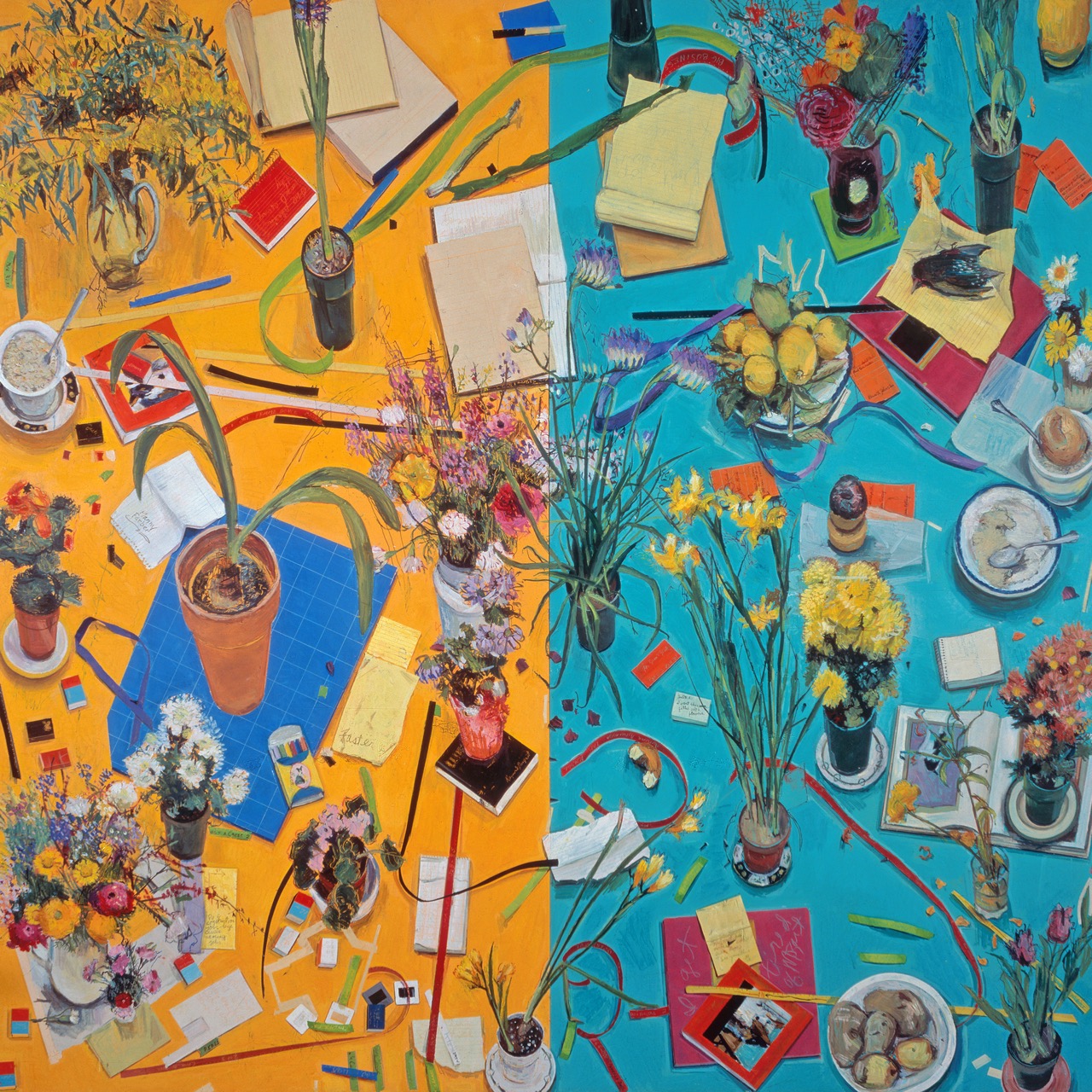 Farber was, in J. Hoberman’s words, “more connoisseur than critic.” He possessed a pithy, impassioned prose style and a sportswriter’s ability to translate bodies in motion into words and images. Instead of recapping offensive plays or basketball formations, he dilated on Cézanne’s brushwork, John Wayne’s gait, and William F. Buckley’s debating technique. For Farber, the experience of culture was a spatial and kinetic one. In the essay “White Elephant Art vs. Termite Art,” written in 1962, he invoked an insect’s single-minded, industrious drive as he excoriated art that shrieks with “preciosity, fame, ambition” and extolled that which entails “buglike immersion in a small area without point or aim, and, over all, concentration on nailing down one moment without glamorizing it.” 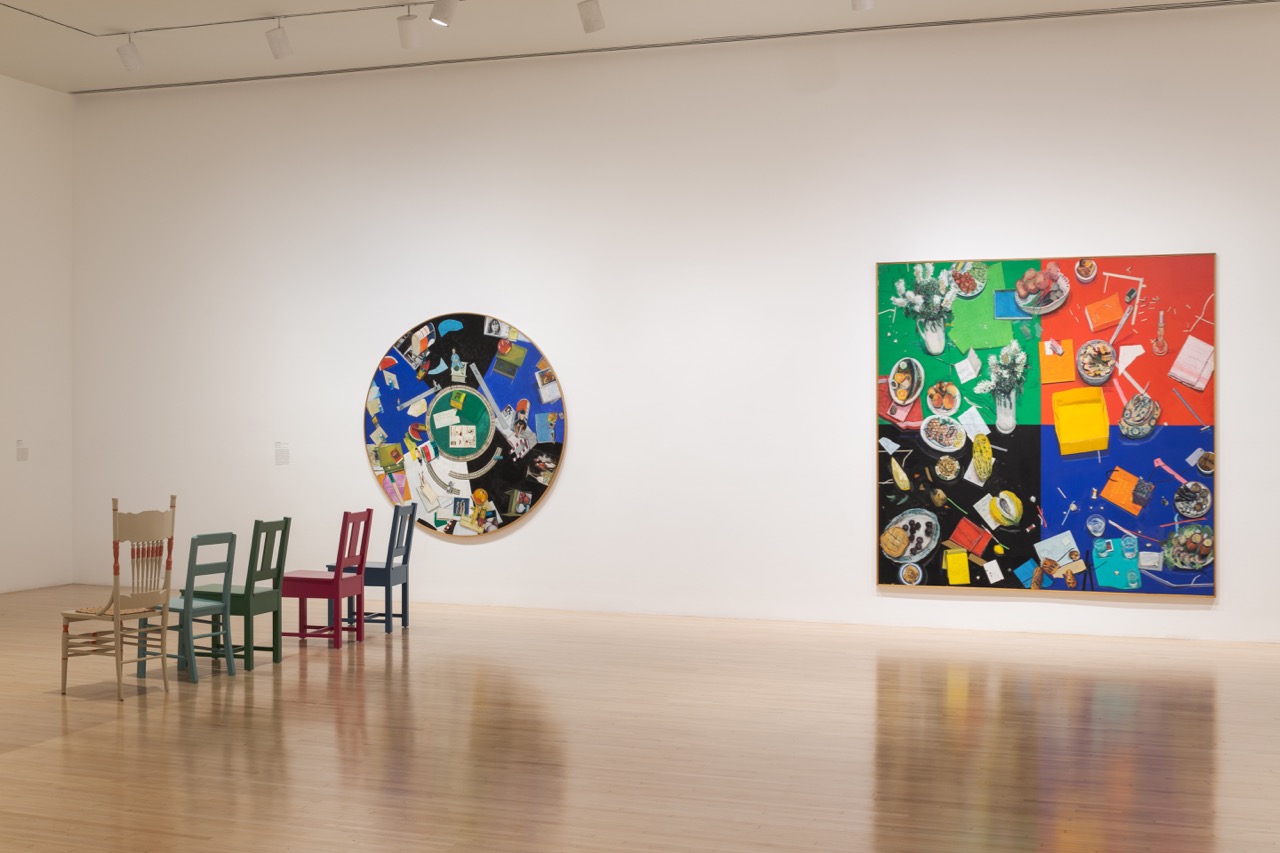 Assembling more than thirty artists, including Vija Celmins, Chris Marker, Rodney McMillian, and Becky Suss, curator Helen Molesworth has taken up Farber’s call to arthropod action with an exhibition of over one hundred works of painting, sculpture, photography, film, video, and sound from the 1950s to the present. It begins with a large room devoted to Farber’s work. These include painted aerial perspectives of the artist’s desktop littered with notebook paper, typewriter erasers, index cards, a box of Red Hots, as well as more elaborate tableaux—diptychs, four-panel pieces, a tondo—in which the still life multiplies and swarms Farber’s fields of lush saturated color with flowerpots, strips of film leader, plates of shellfish, scraps of paper, matchbox cars, books, and fruit. These are portraits of things but also of a man who took pleasure in his work and life. 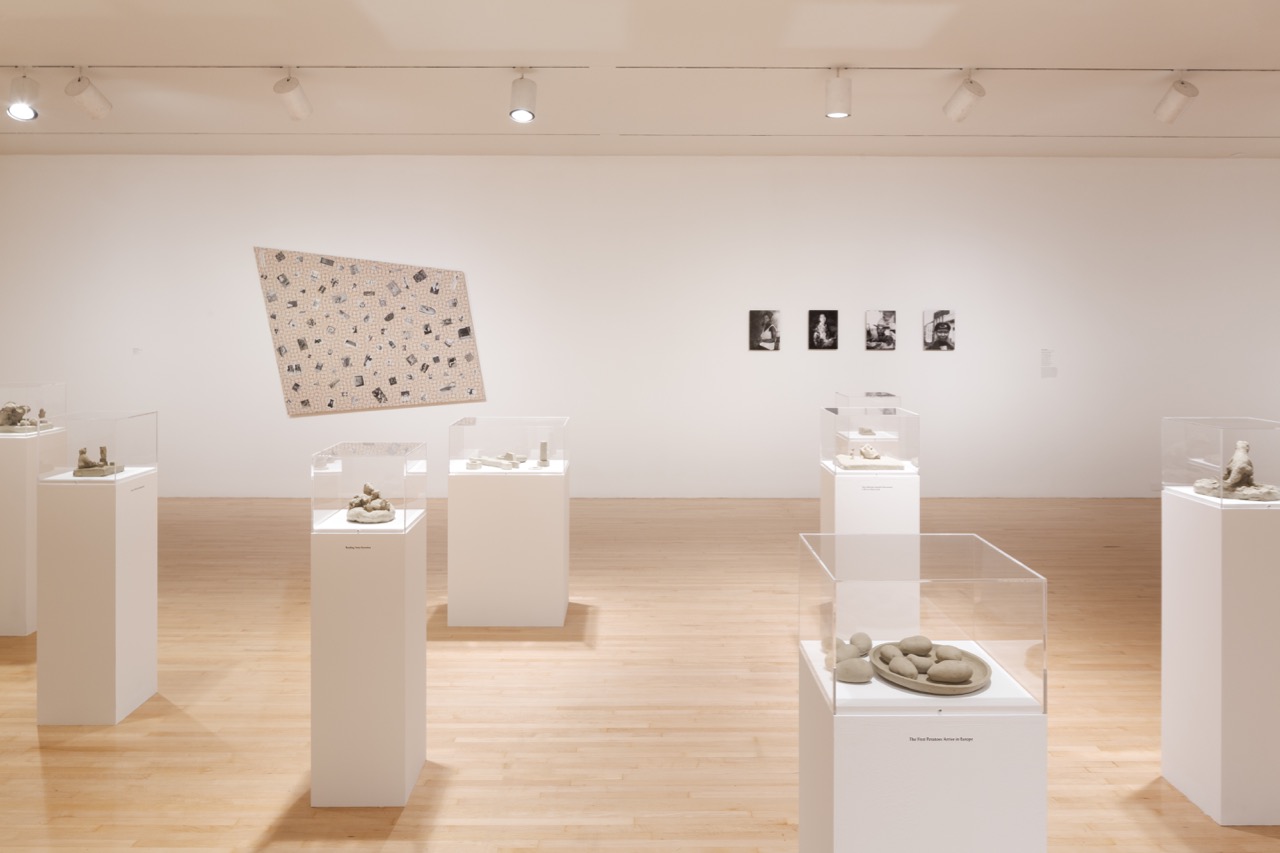 From there, the show expands not in any chronological or otherwise linear fashion but coral-like, branching and associative, into explorations of dailiness, work, and the passage of time. In Fischli and Weiss’s Suddenly this Overview (1981–), a series of hand-sculpted clay objects and vignettes, the results are playfully mundane and absurd: a plate of potatoes, dog bowls, two people outside an office building with the caption “Smoking Break.” In Presentation Sisters (2005), Tacita Dean’s 16mm film, which follows a group of nuns going about domestic tasks and devotions in Cork, Ireland, the effect is subdued and meditative—an untroubled echo of another film committed to the minute observation of daily life, and one of Farber’s favorites, Jeanne Dielman, 23, quai du Commerce, 1080 Bruxelles (1975) by Chantal Akerman. 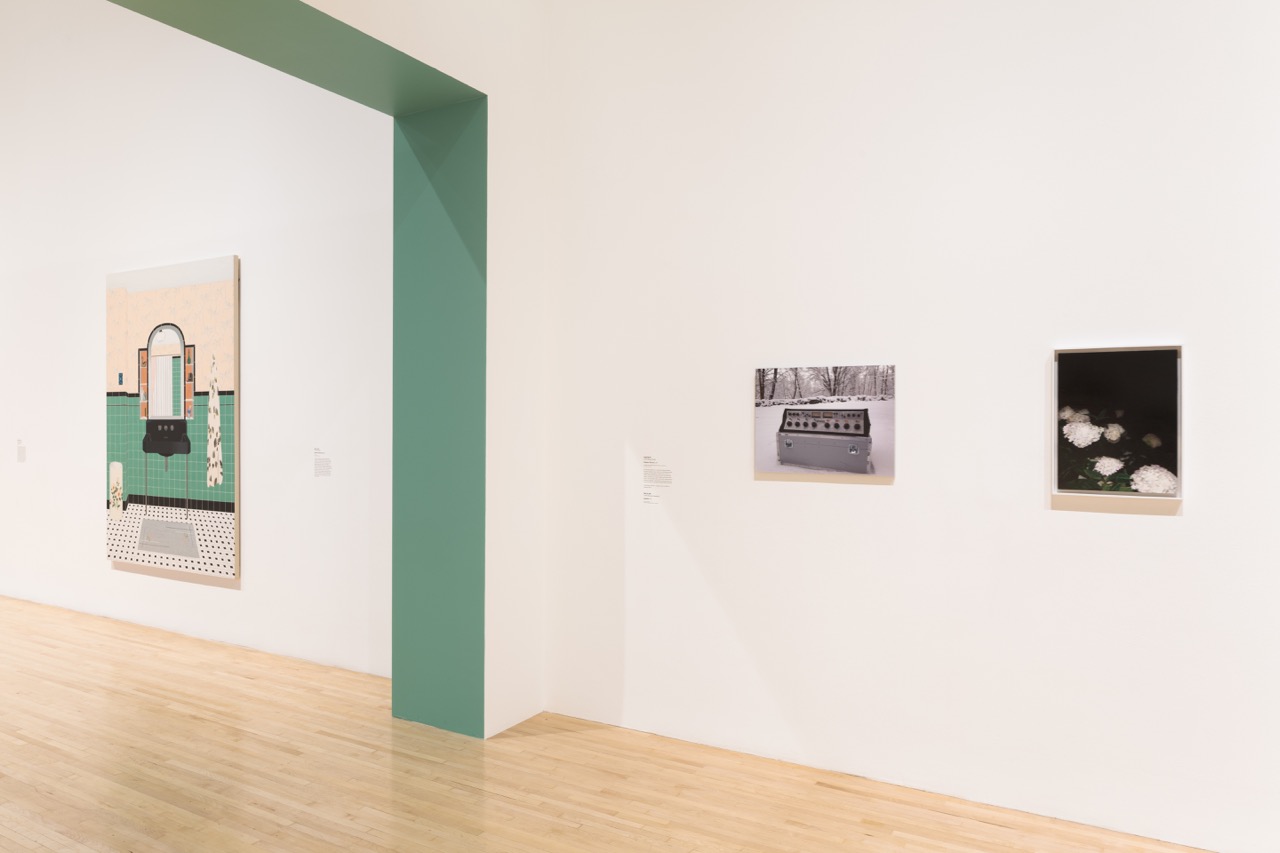 Recurring themes and motifs emerge, such as the presence of household pets, delight in the natural world, and lemons. Some linkages among the works are obvious: the flowers that litter Farber’s paintings, Jordan Casteel’s painting of a funeral wreath in a trash can (Memorial, 2017), and the flamboyant floral arrangements that Maurice Harris delivers weekly to the museum. Others aren’t as overt but no less resonant, like Dike Blair’s oil painting (Untitled, 2017) of white hydrangeas blooming in the dark next to musician Quintron’s photograph of new-fallen snow on his analog synthesizer, Weather Warlock (2011), nature and machine in unexpected harmony. In some cases, a termite-like intensity manifests in the simple act of mark-making, from the vibrant slashes of color in Joan Brown’s Woman Waiting in a Theatre Lobby (1975) to the muted, repeating dabs of paint in Jennifer Guidi’s near-abstract landscapes. Throughout the galleries Farber’s ecstatic still lifes appear like Easter eggs or friendly faces at a cocktail party. A good one, though it has a melancholic strain. 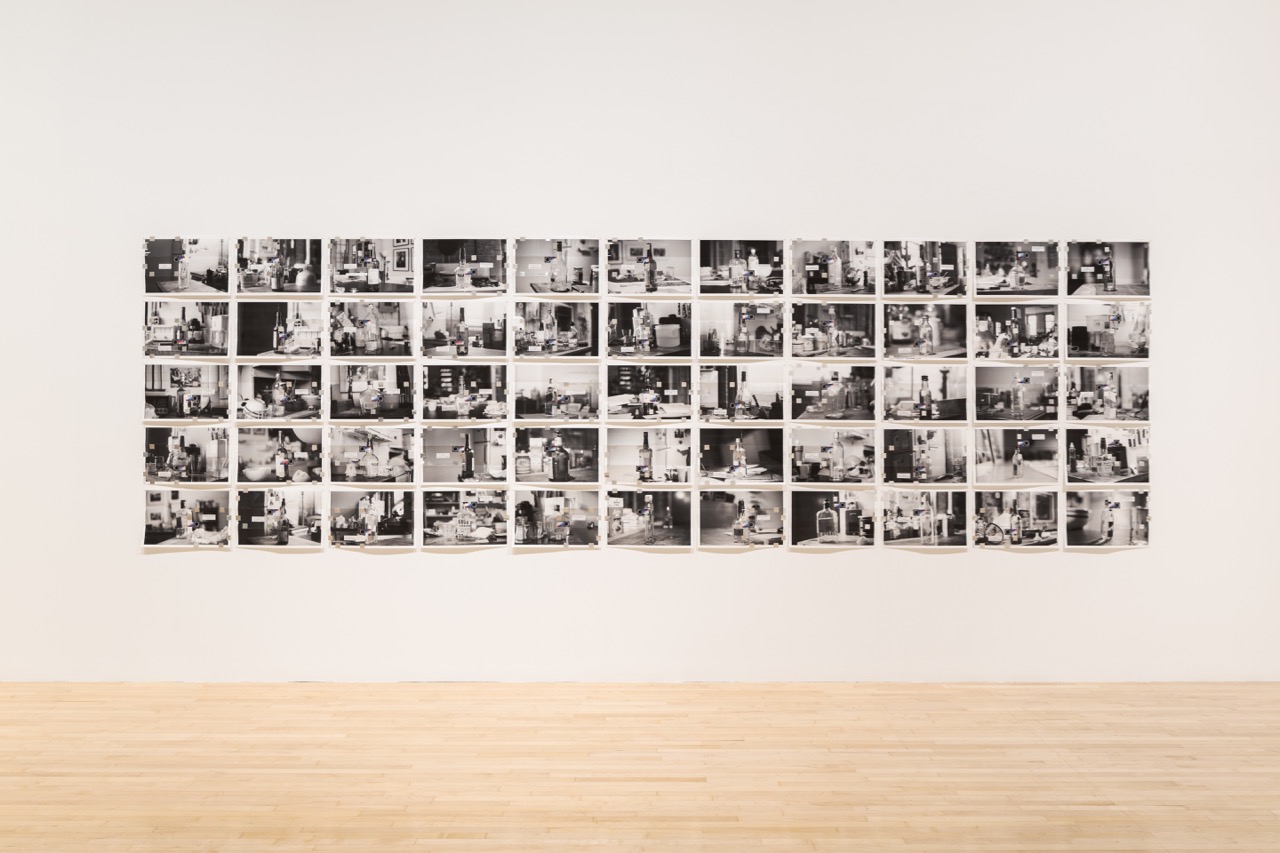 Midway through the show, Moyra Davey’s Empties (2017), elegiac photos of spent liquor bottles in still emptier rooms, testify to nights passed. On the opposite wall Wolfgang Tillmans’s large-scale photograph of his own cluttered desk (studio still life, c. 2014)—computer monitors, a green beer bottle, a tape dispenser, and cigarettes packs emblazoned with “SMOKING KILLS”—appears like an answer song to Farber’s earlier paintings. At one end of the gallery wait Blair’s mesmerizing photorealist gouaches, hauntings of mundane spaces and objects—a lone martini, a molded plastic chair in an airport, an ashtray, the rounded edge of an airplane window—images of life slowed down enough that you can feel it passing. 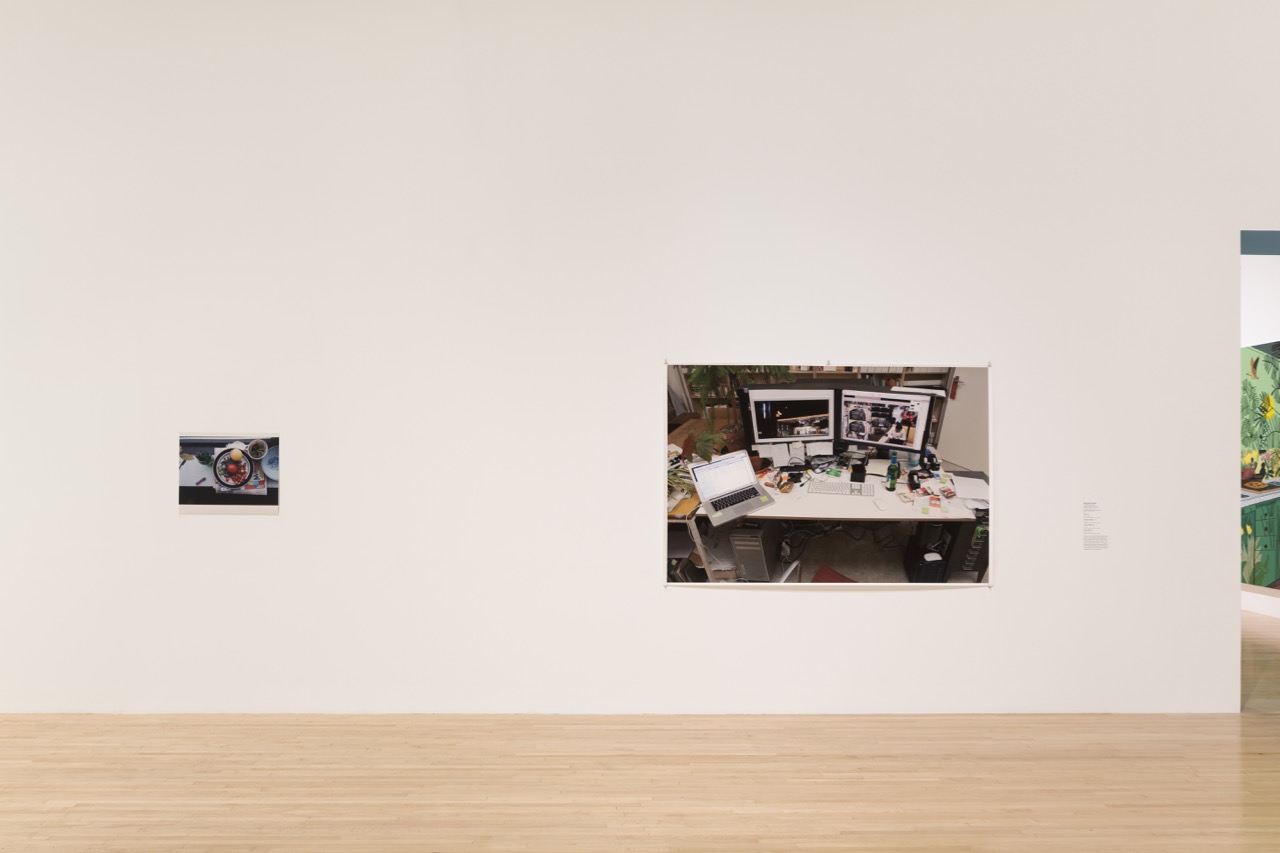 For the first time that I recall, a room of art made me want a cigarette. Smoking kills. It also carves time into tiny ceremonies. The things you notice holding a cigarette: the sound of traffic, the shadow of a bird in flight. I left the museum, grateful I hadn’t once felt the urge to document or broadcast anything, that Instagram, that relentless still-life machine, had never entered my mind. 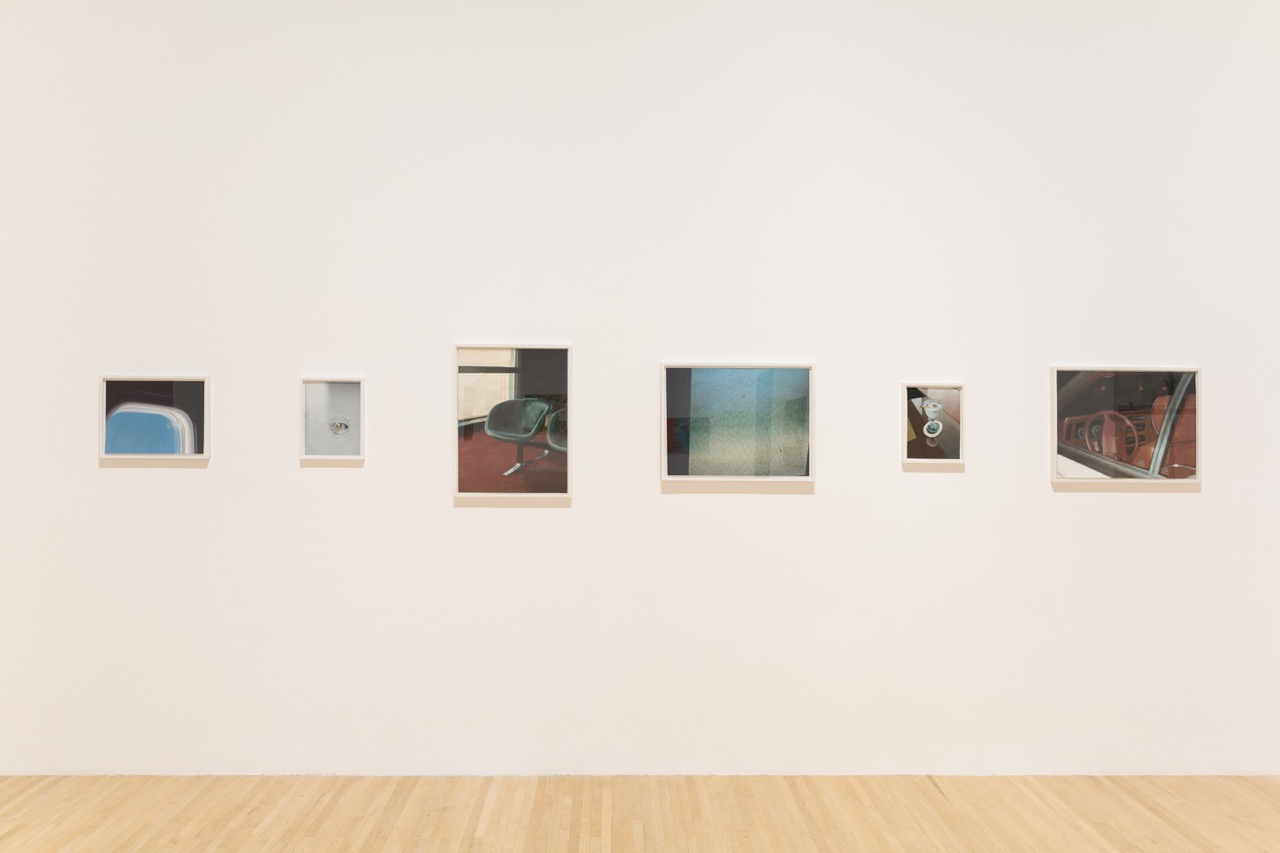 When I came back a few weeks later I was thinking again about smoke. I’d bought an air purifier earlier that day on Amazon, the Dutch East India Company of our time, for my parents who live in Chico. About ten miles east, the town of Paradise was gone, incinerated by the Camp Fire. The air quality index had reached 438 and would eventually max out the 0–500 scale. Days later smoke from the West Coast drifted all the way to New York City.

The still life’s other name is nature morte, because, of course, the flip side to all those gorgeous paintings of food and stuff is the creeping reminder that none of it will last, not even the Dutch East India Company, whose corporate charter expired in 1799. 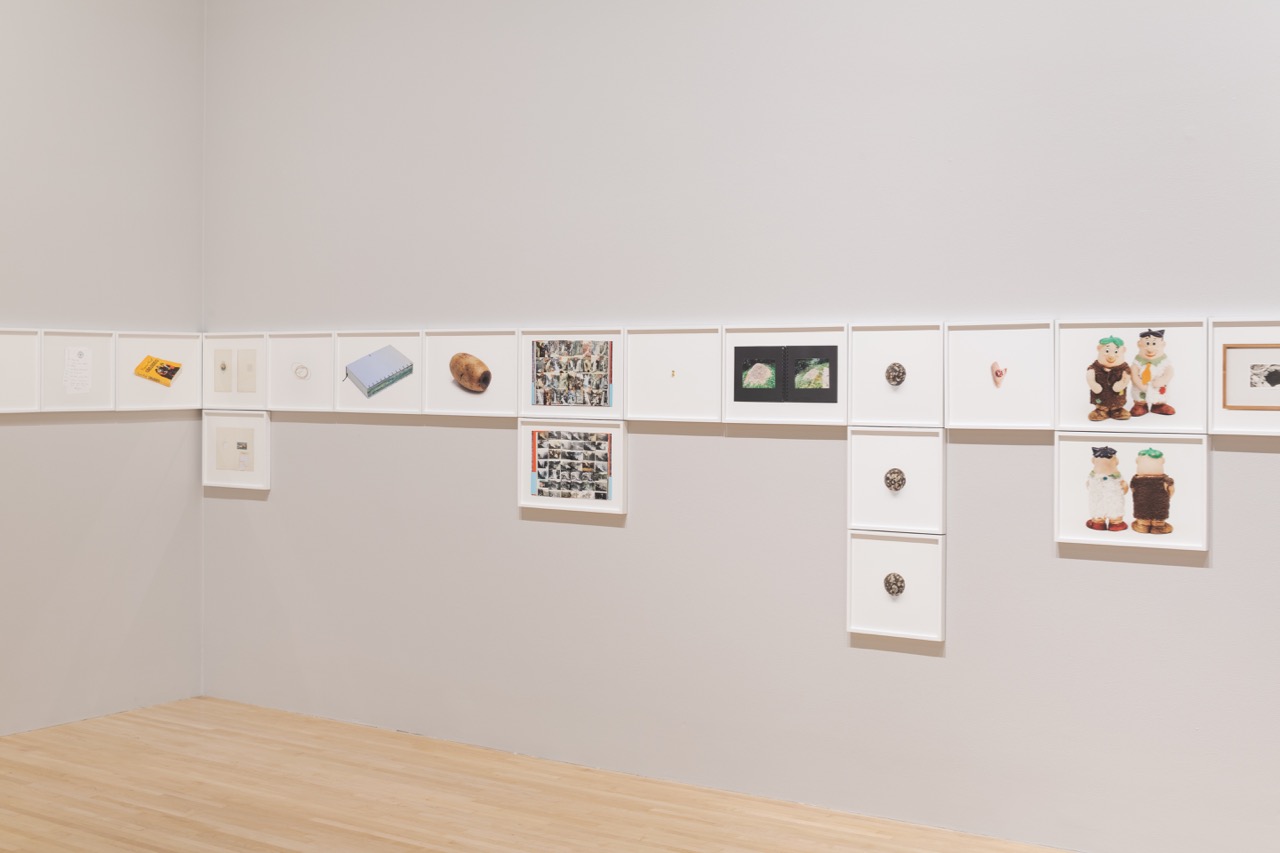 Alongside the joys of daily life, there’s an awareness, especially in the exhibition’s later galleries, of how the present keeps hardening into the past. In The Selected Gifts, 1974–2015 (2015–16), Roni Horn photographs presents she’s received from friends against stark white grounds, the camera converting personal ephemera—books, a pair of Flintstones figurines, a stereoscopic photo of the moon—into artifact. 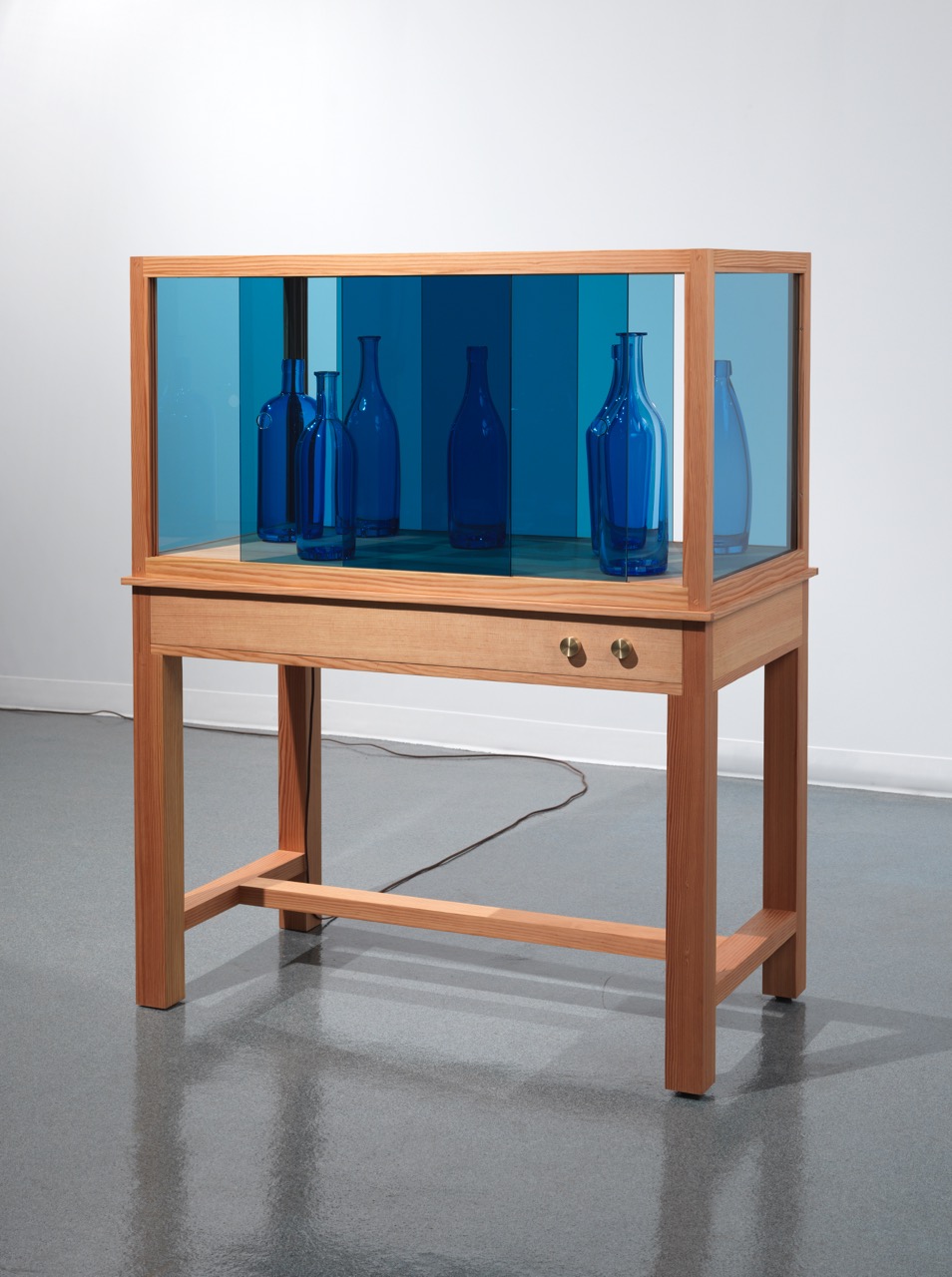 As with friendship, so with romance. Near an exit sign stands Josiah McElheny’s still life brought to life. End of a Love Affair (2014) consists of seven blue glass bottles—more empties—inside a cabinet made of wood and more blue glass. A piece of furniture, with two brass knobs, wired for sound, possibly functional, it appears familiar and not. And then a song begins, a jazz number with a lilting bossa nova beat, and it’s telling you goodbye.

Liz Brown is currently at work on Twilight Man: The Strange Life and Times of Harrison Post, to be published by Viking. Her writing has appeared in Bookforum, frieze, London Review of Books, Los Angeles Times, New York Times Book Review, and elsewhere.