Visual Art
The Matter of Photography

A survey of Latin American artists who push beyond the document. 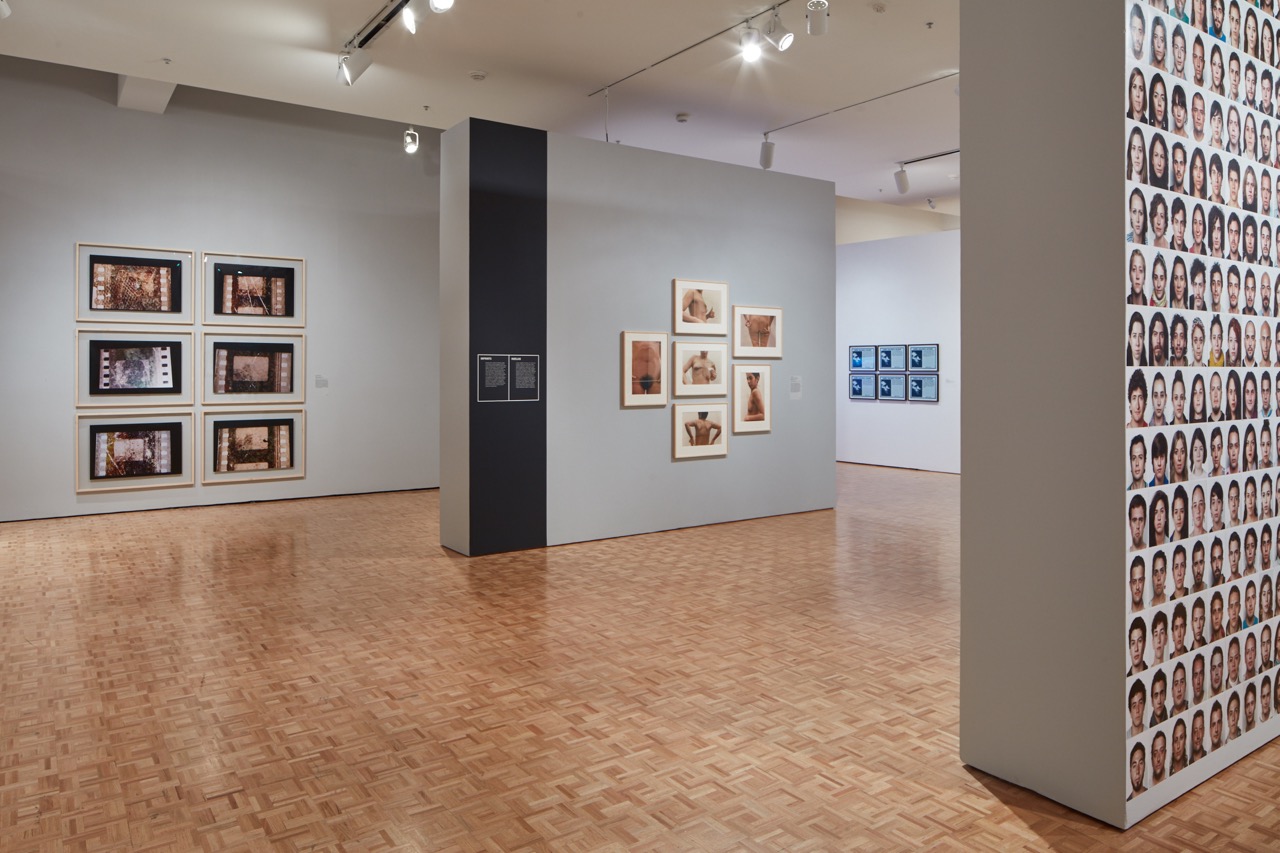 The Matter of Photography in the Americas, installation view. Photo: Johnna Arnold.

The Matter of Photography in the Americas, Cantor Arts Center, 328 Lomita Drive at Museum Way, Stanford, California,
through April 30, 2018

It is conspicuous, and telling, that The Matter of Photography in the Americas, a tightly focused yet theoretically expansive exploration of contemporary practices from Latin America on view at Stanford’s Cantor Arts Center, begins not with a photograph but rather a video, one that announces an ambitious curatorial agenda right up front. In this piece, Biografías (2002), by Colombian artist Oscar Muñoz, faces appear phantasmagorically in a sink full of water—“printed” on the surface with charcoal powder—but their legibility slowly becomes compromised as the water drains and their features dissolve. With this compelling beginning, in which visages distort, become unfixed, and then ultimately disappear, The Matter of Photography declares its intent to recalibrate histories of Latin American photography that have too often emphasized the strictly documentary and the evidentiary. As an opening gambit, Muñoz’s video also demonstrates how the exhibition resists traditional accounts of photography’s medium specificity. 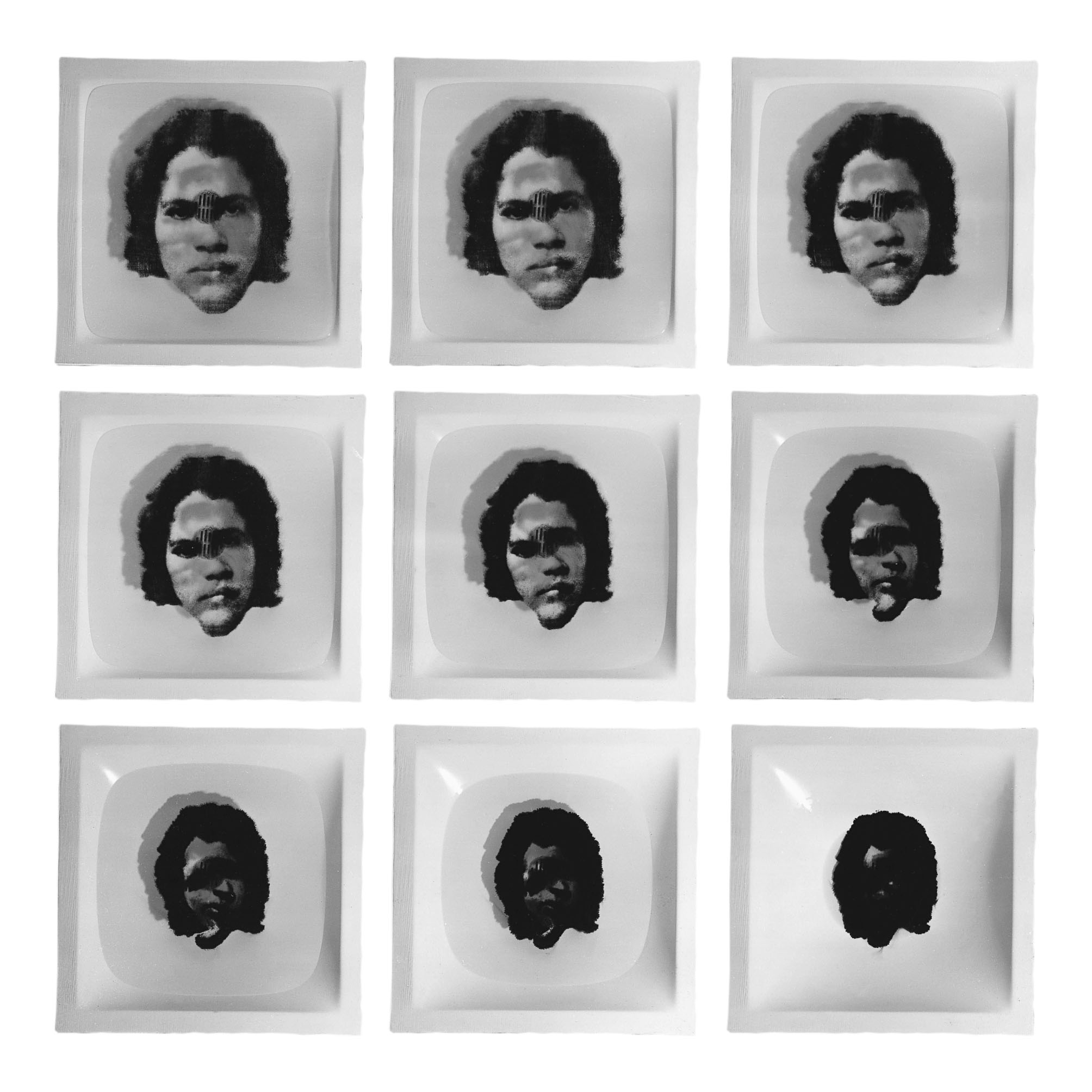 Organized by Natalia Brizuela, a scholar who has published widely on Latin American media practices, and Jodi Roberts, the Halperin Curator at the Cantor, the exhibition brings together over forty artists from the US, Mexico, Central and South America, and the Caribbean who work in and around photography. Though it includes snapshots, 35mm slides, digital pictures, Polaroids, and gelatin silver prints from the past fifty years, the exhibition also features recent drawings, films, performances, hand-stitched collages, photocopies, and sculptural work; many pieces engage some aspect of photography but are technically not photographs. The curators embrace a capacious, elastic conception of the medium, one that comprises many modes of depiction—and one that at times refuses to depict. In doing so, they reveal how photography’s vaunted claims to facticity have been contested by contemporary Latin American artists as much as by their Global North counterparts; how, as the catalogue states, “the notion of photography as a unique bearer of truth has been irreparably dismantled.”

The political stakes of this dismantling are especially acute in the context of Latin America, given the specific pressures placed on photography to act as a witness during eras of extreme state violence. In this broadly defined hemispheric arena, photography has been understood as simultaneously powerful and dangerous—hence the heavy hand of the censor within dictatorial regimes—as well as increasingly meaningless or ineffectual within the overwhelming flows of corporate, globalized mass media. As this show illustrates, artists have grappled with this paradox in a number of ways, and frequently turn to tactile methods of making—reprocessing journalistic images as hand-drawn sketches, as does Colombian Beatriz González, or mixing natural salts with photographic chemicals to produce earthy abstractions, in the case of Venezuelan Nicola Noemi Coppola—in order to propose more intimately felt relationships to representation. 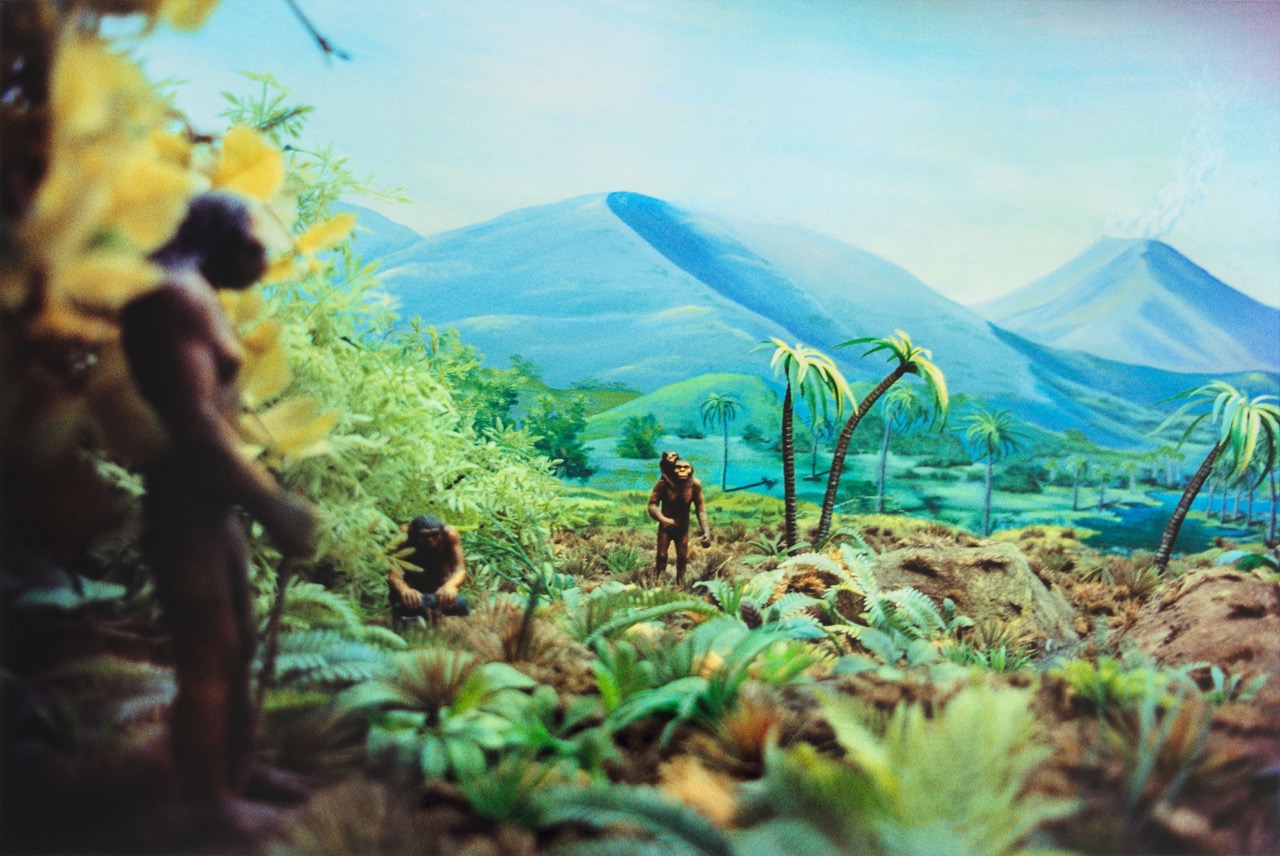 The Matter of Photography is structured thematically, with works clustered under the headings news, ethnography, discipline, imprints, copies, data, erasure, and matter. Throughout, these categories are both put to use but also undone by the pieces on view, as in the section on ethnography that includes works that critique how photography has been instrumental to colonial museum displays (Argentine Adriana Bustos’s surreal dioramas), the construction of national identity (Guatemalan/Mexican artist Oscar Farfán’s grid of identification portraits), and the packaging of Indigenous peoples in the service of tourism (Brazilian Anna Bella Geiger’s collection of exoticizing postcards). Many of these artists undermine anthropological “certainties” by calling into question how racialized distinctions have been regulated by imaging technologies. 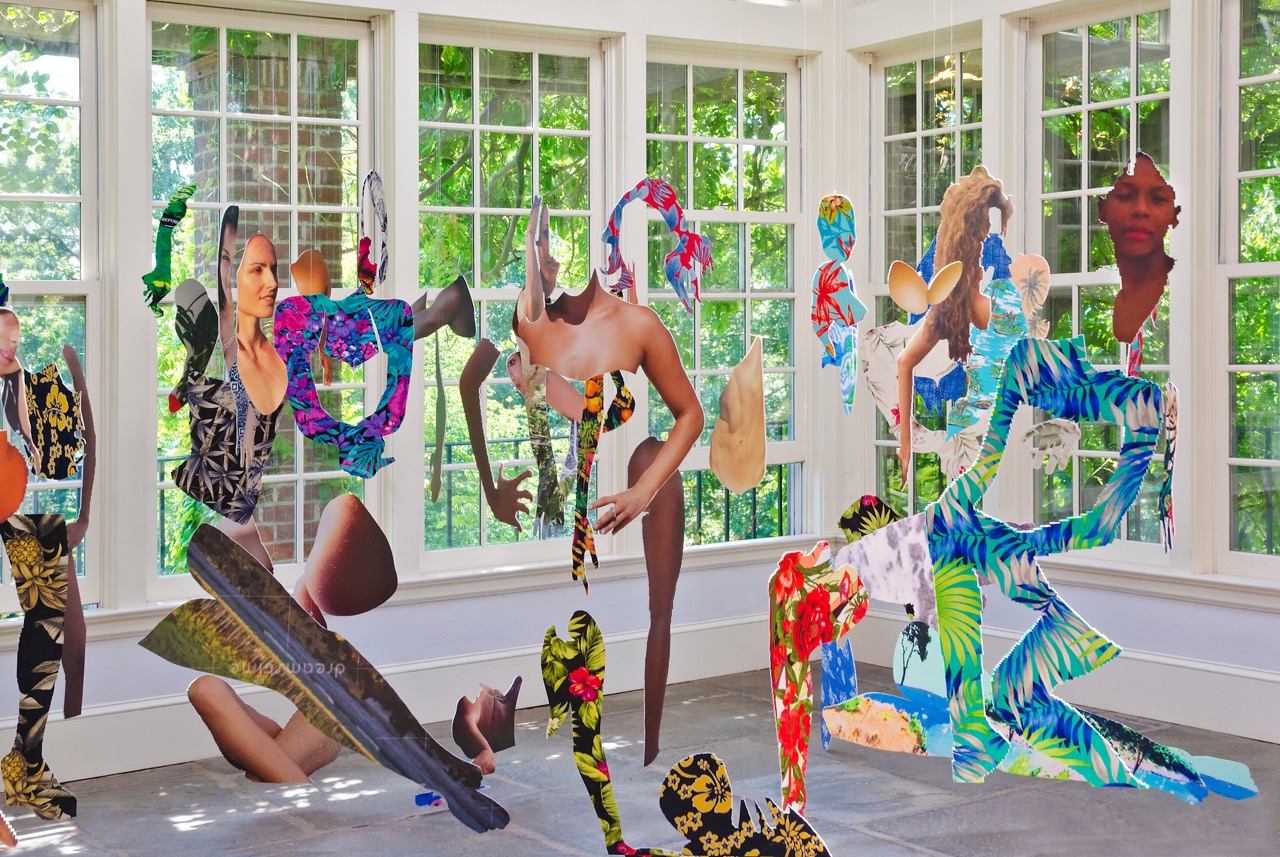 Among the strengths of this show is its unstated, yet highly prominent, feminist framework. Women artists are heavily represented at every turn, and their work is not limited to thinking about gendered concerns (though many do precisely that): from Mexican artist Teresa Margolles’s compendium of magazine covers with their dissonant conjunction of gruesome crime-scene photos next to pictures of bikini-clad models, to Costa Rican Priscilla Monge with her aesthetically elegant gold-leaf monochrome, to Dominican-American Joiri Minaya’s pixelated, fragmented bodies, in #dominicanwomengooglesearch (2016). Depictions of defiantly non-normative sexuality also play a significant role, in forthright expressions of queer desire by the pioneering Mexican feminist Mónica Mayer’s text-and-image work entitled Lo normal (1978), in the vulnerably exposed body parts Xeroxed by gay Brazilian artist Hudinilson Jr., and in the campy re-performances of Marcel Duchamp in drag by Colombian artist Álvaro Barrios. 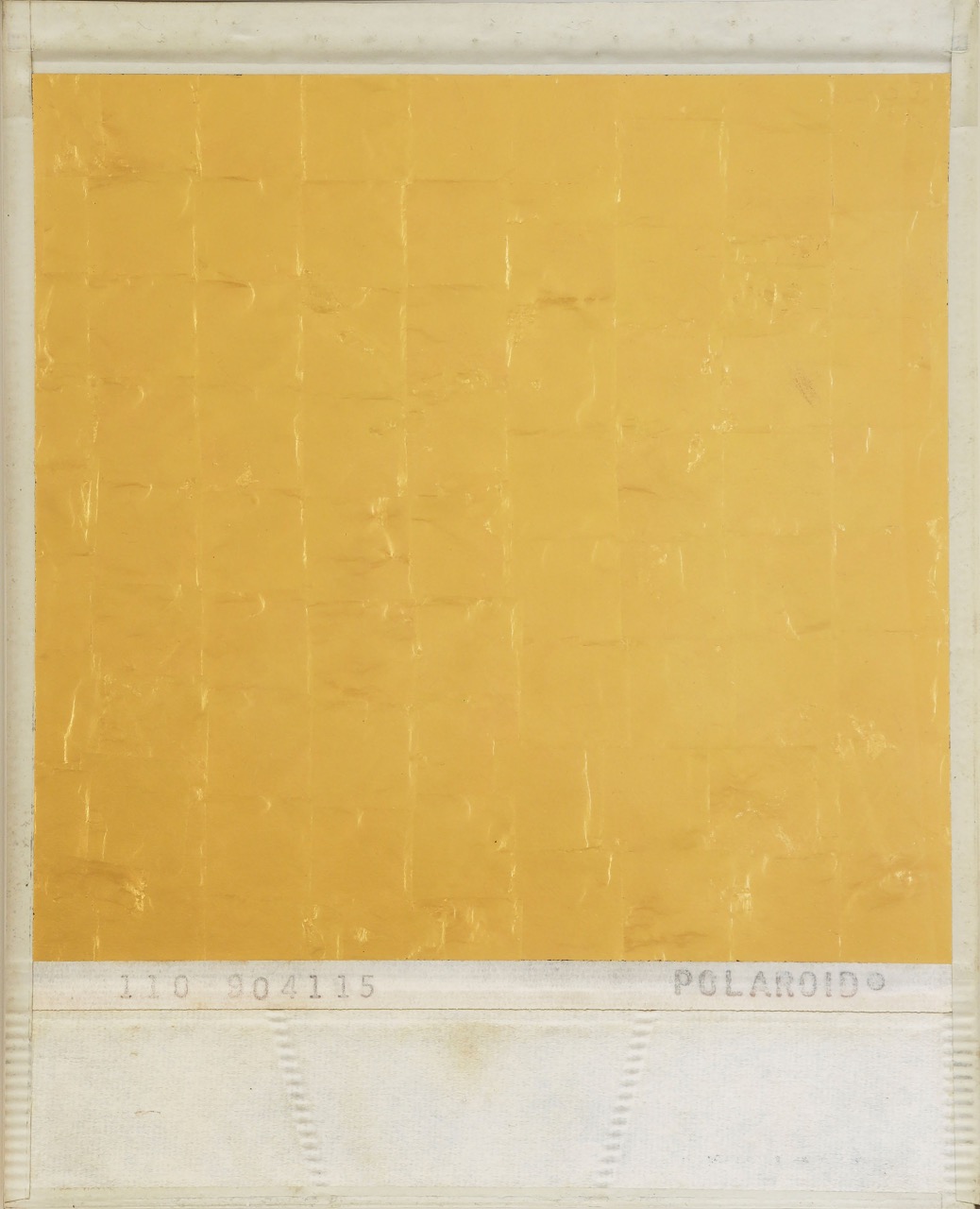 Indeed, much of the work in The Matter of Photography revels in the fictive and the imaginative, as artists turn to the camera—or the Xerox machine, or the dot-matrix printer—in order to exaggerate, to invent new histories, to fabulate, to dream. Against the tendency to understand Latin American photography as a straightforward transmission of information, these artists produce their own theoretical categories around unknowing, blurring the boundaries of the medium as they investigate decay, rumor, obsolescence, abstraction, fantasy, absence, irresolution. Which is not to say that the show is escapist: quite the contrary. The catalogue, with a substantial essay by Brizuela as well as shorter texts by Roberts on each of the subthemes, includes even more examples as it traces a decidedly political arc. 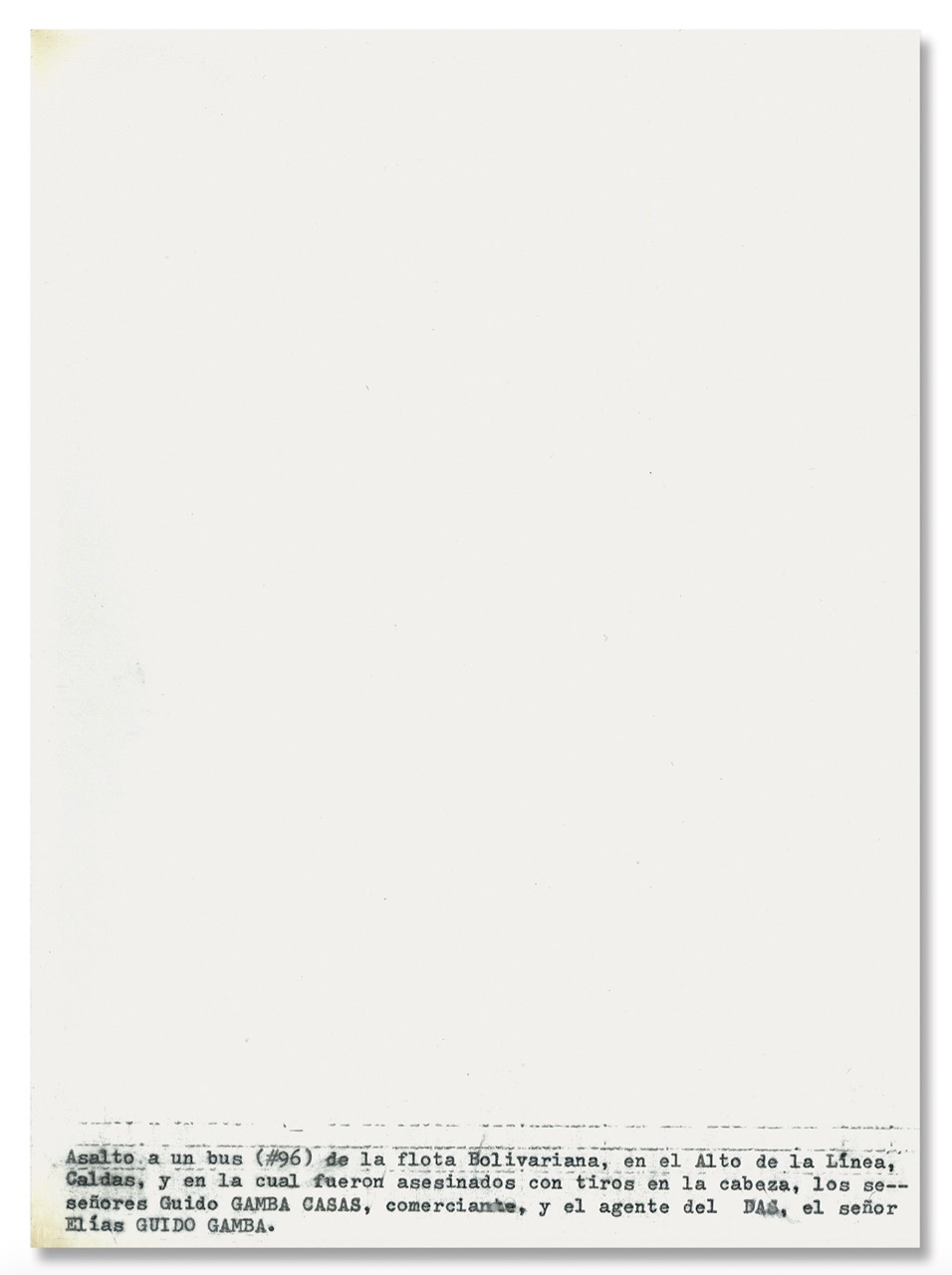 During the rash of military dictatorships that have marked the last fifty years of Latin American history, photography often served contradictory purposes: it was circulated as propaganda, mobilized by resistance movements, and monitored by censors. What happens, ethically, when the photograph goes down the drain—or is redacted, blacked out, withheld, voided? What possibilities for spectatorship are opened up in the wake of these vanishings and expurgations? At the conceptual center of the show is a deceptively simple work consisting of four seemingly empty pages, from a series called Pie de fotos (2012), by Colombian artist Johanna Calle. At the bottom of these otherwise blank gelatin silver prints are typed descriptions, in Spanish, of disappearances, assaults, and assassinations, inspired by an archive of police files. Reading this bureaucratic yet evocative language about corpses, lacerations, and gunshots, the viewer fills in the space where the photo has been absented, creating a mental picture. Calle’s arresting work, with its formal experimentation and its urgency, shows what happens when a photograph is untethered from its status as proof: it can be seared even further into the mind.

Julia Bryan-Wilson is Professor of Modern and Contemporary Art at the University of California, Berkeley, and the Director of Berkeley’s Arts Research Center; she is the author, most recently, of Fray: Art and Textile Politics (University of Chicago, 2017).