It’s Virgin to Versace in the Met Museum’s look at Catholicism
and fashion. 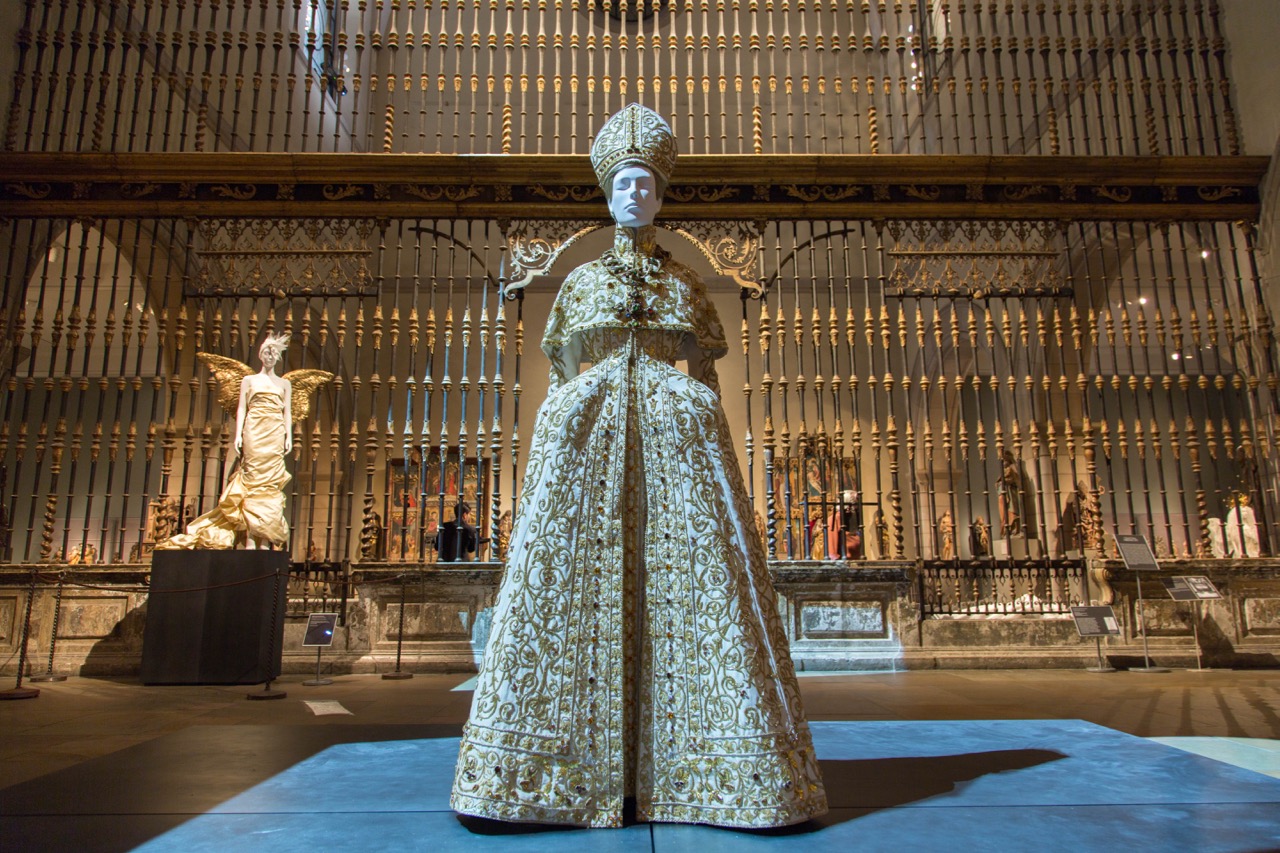 Few exhibitions have the potential to offend as varied a public as Heavenly Bodies, the Metropolitan Museum of Art’s current blockbuster, organized by curator Andrew Bolton. Divided into three parts, and between the Met Fifth Avenue and the Cloisters, it explores both the baroque Roman Catholic Church’s love affair with bling, as an expression of devotion and an aid to worship, and the inspiration twentieth- and twenty-first-century designers have drawn from Catholic iconography and from the ecclesiastical garments and monastic habits that serve to distinguish sacred from profane in real life.

Art-lovers and churchgoers alike may be startled by the juxtaposition, in the Met’s Byzantine galleries, of a halter top by Gianni Versace (autumn/winter 1991–92), lavishly adorned with crystals and sequins that together compose the image of a Madonna fit for a basilica in Ravenna, with a miniature mosaic icon from the early 1300s, showing the Virgin Eleousa (the Virgin of Compassion), sharing a tender embrace with her infant son. The former was destined for some worldly, glittering evening—a movie premiere, an embassy dinner, a hot night of dancing—while the latter was, in all likelihood, the object of private religious veneration. And in truth, no one, on the crowded weekend when I visited the Met, appeared to be looking at the little mosaic, beautiful and fragile. Fashion—glamorous and unobscured by the mists of time—sucked up all the attention. 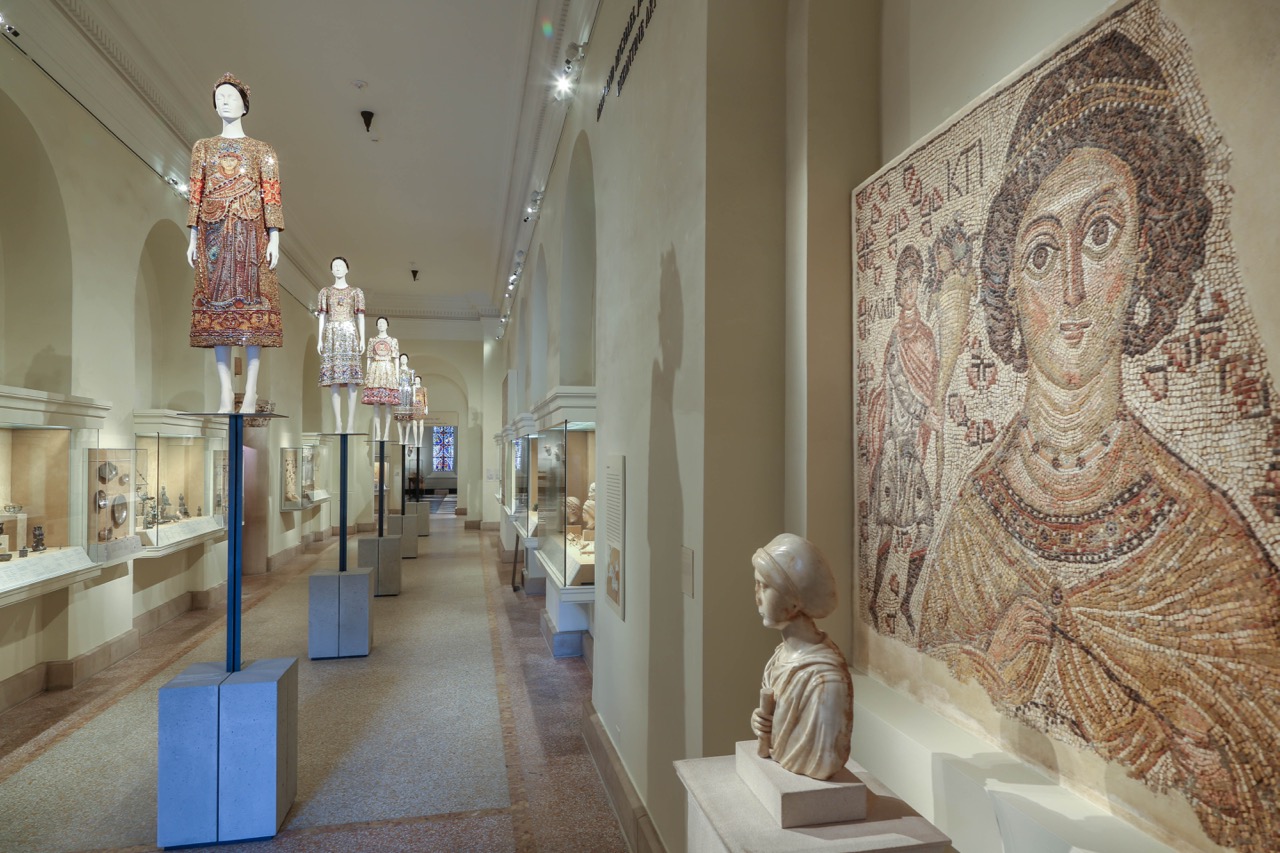 When regarding an astonishing suite of twelve vestments (chasubles, dalmatics, etc.) given as a gift to Pope Pius IX in 1862 and richly embroidered with biblical scenes, from the Fall in the Garden of Eden to the Passion of Christ, other viewers may find themselves wondering about the nimble fingers that did the stitching. The entire suite, on display among over forty rare treasures on loan from the Vatican in the Anna Wintour Costume Center, was created by the Istituto Femminile di Don Nicola Mazza, “founded in Verona in 1828 as a refuge and training facility to cultivate the virtue of young girls,” we learn in the show’s two-volume catalog. The completion of these garments, destined initially for one man, “required the collective effort and skill of fifteen women over the course of almost sixteen years.” What lessons—of humility, patience, and craft—were imparted during those years of (what now seems to us) penance-like activity? Did any of the women go blind?

Yet the worlds of fashion—particularly la haute couture, a tradition of luxury based in the predominantly Catholic countries of France and Italy—and the Catholic Church have much in common. On the one hand, just how deeply invested the Church was, at a certain moment in its history, in beauty and even glamour as conduits to the divine strikes one at the Costume Center with the force of revelation. A three-tiered papal tiara from 1854, weighing almost three pounds—a Fabergé-egg-like confection of diamonds, rubies, sapphires, emeralds, and pearls—recalls nothing so much as an earthly crown. Gloriously embroidered miters, mantles, copes, and stoles; a pair of silk slippers stitched with crosses, in gold thread, for the faithful to kiss; and enough chef d’oeuvres of the jeweler’s art (dazzling rings, a clasp with over seven hundred diamonds) to make Elizabeth Taylor blush—all were testaments to both the Roman Catholic Church’s wealth and worldly power, and the papacy’s awe-inspiring, otherworldly dimension.

On a lesser scale (and commensurate with our spiritually diminished times), fashion, too, has its icons—objects of popular veneration, worshipped from afar. And a couture house, like the Church, has traditionally functioned along rigidly hierarchical lines, from the arpettes (apprentices, usually young girls, charged with picking up the pins at fittings) to the petites mains (the skilled seamstresses, capable of cloistered devotion), and on up through the ranks. At its summit is the couturier (usually a man), often surrounded by his muses, like patron saints of fashion. 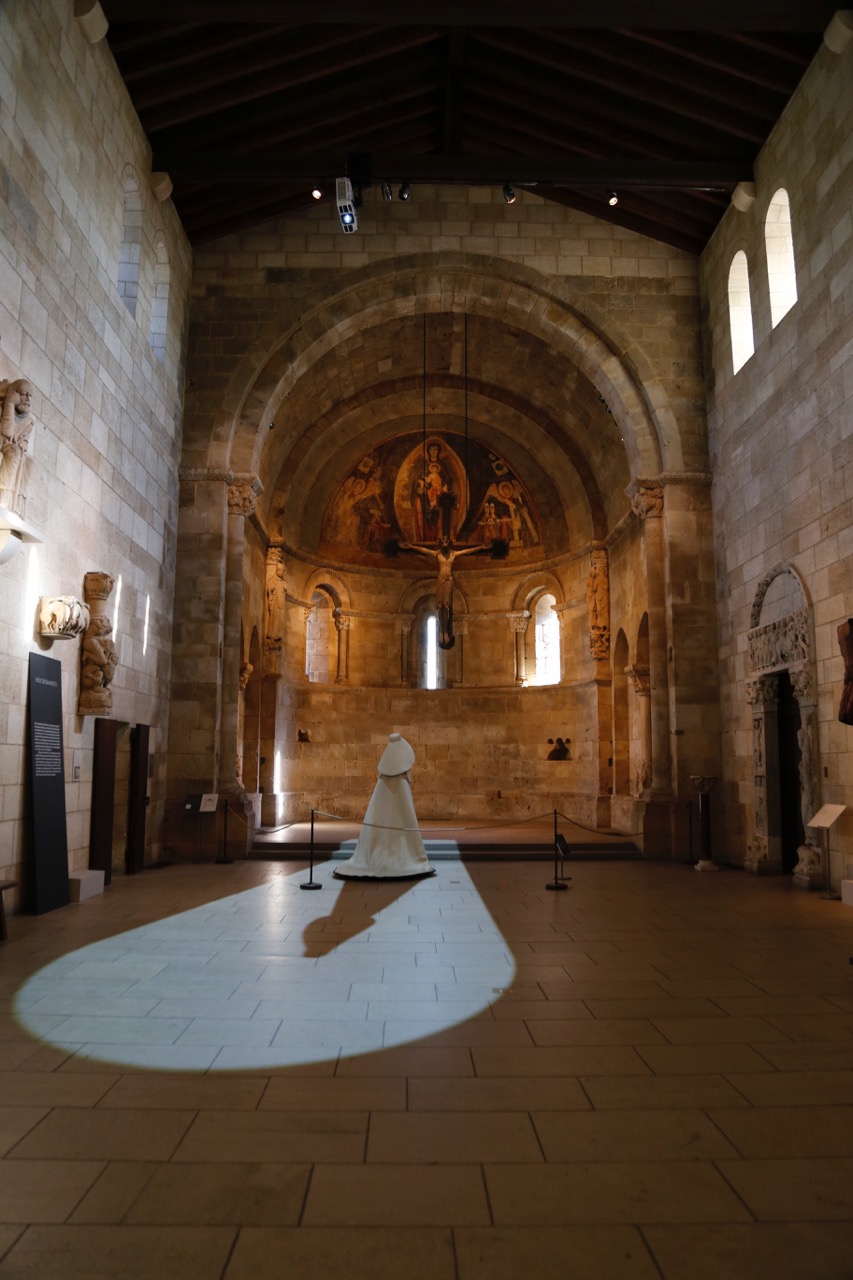 Cristóbal Balenciaga—whose sublimely simple, nunlike wedding dress from 1967 (known in fashion history as the “single-seamed” wedding dress, though it actually has three seams) marries beautifully with the Romanesque chapel where it is displayed at the Cloisters—was a man of profound religious conviction. For Balenciaga, who also created clerical garments, “designing clothes was more than a craft, more than art; it had the characteristics of a religious vocation,” wrote the late journalist and literary critic Eve Auchincloss. His atelier “had a curious monastic zeal,” another observer noted, “in which there was no room for loud and outspoken people, nor for laughter and disorder. Everything was done in an atmosphere of silence and efficiency.”

In fact, my visit to the Cloisters, where fashions inspired by the habits of various monastic orders are presented, often in striking resonance with their architectural settings, came as something of a relief, after the cacophony (magnified by irritating, piped-in music) of the Met Fifth Avenue’s medieval galleries. There is much to admire in the latter’s august halls, where it’s particularly fun to trace the different interpretations (over the course of decades) of a single clerical garment by fashion designers, most of them raised in the Catholic Church. 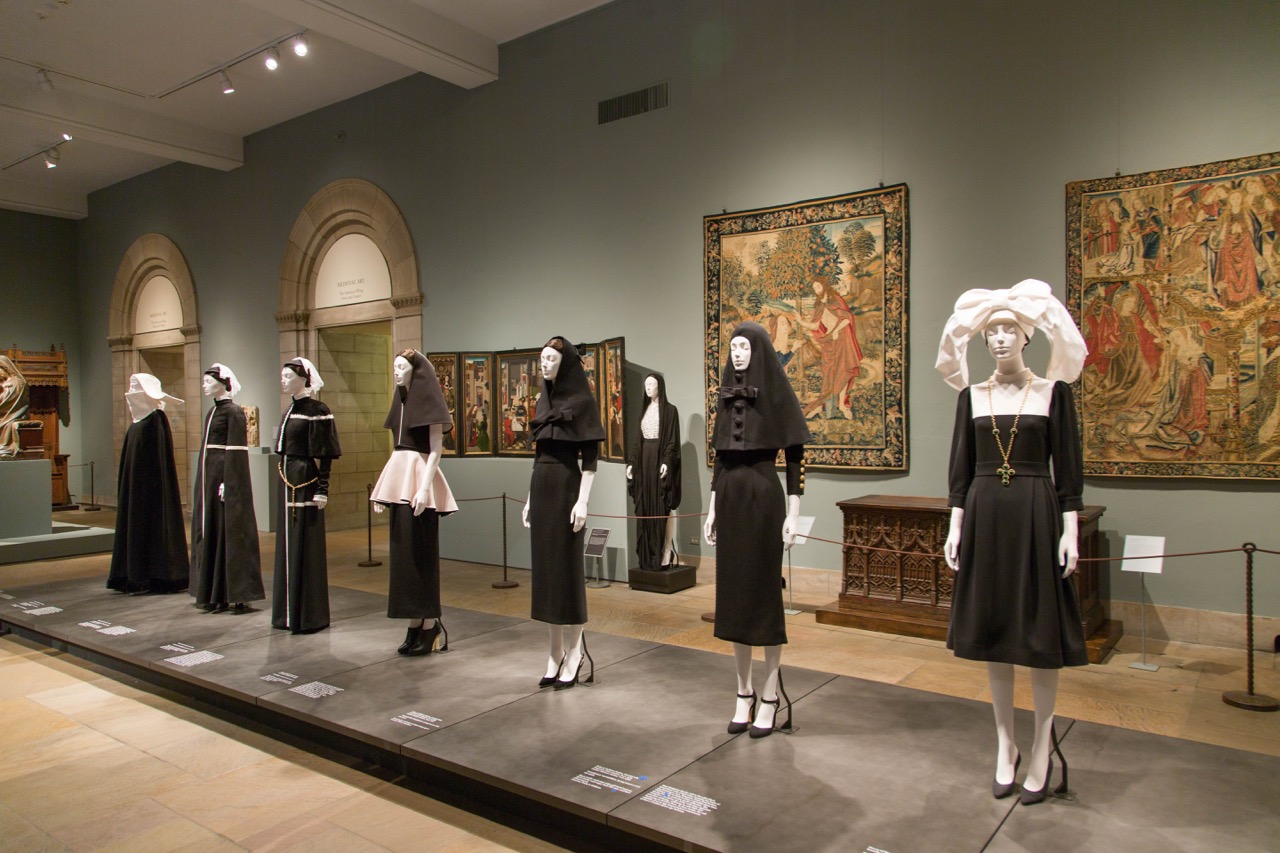 A priest’s soutane, for example, becomes Sorelle Fontana’s 1956, delightfully cheeky “Little Priest” dress—narrow, black, with a matching hat and cross, it was popularized by actress Ava Gardner. The great subversive Alexander McQueen’s dramatically sweeping soutane for the House of Givenchy (spring/summer 1999) is paired with leather biker pants and adorned with a white cotton lace flamenco ruffle; while for the House of Balenciaga, spring/summer 2017, the fashion world’s latest gender-bending darling, Demna Gvasalia, turns the soutane into minimalist, androgynous evening wear, sober and elegant as a tuxedo.

Vitrines display evidence, in the form of Byzantine crosses, Verdura cuffs, and embroidered capelets, of Coco Chanel’s formative childhood years spent in the orphanage of a twelfth-century abbey at Aubazine, and of Elsa Schiaparelli’s flirtation with mysticism. 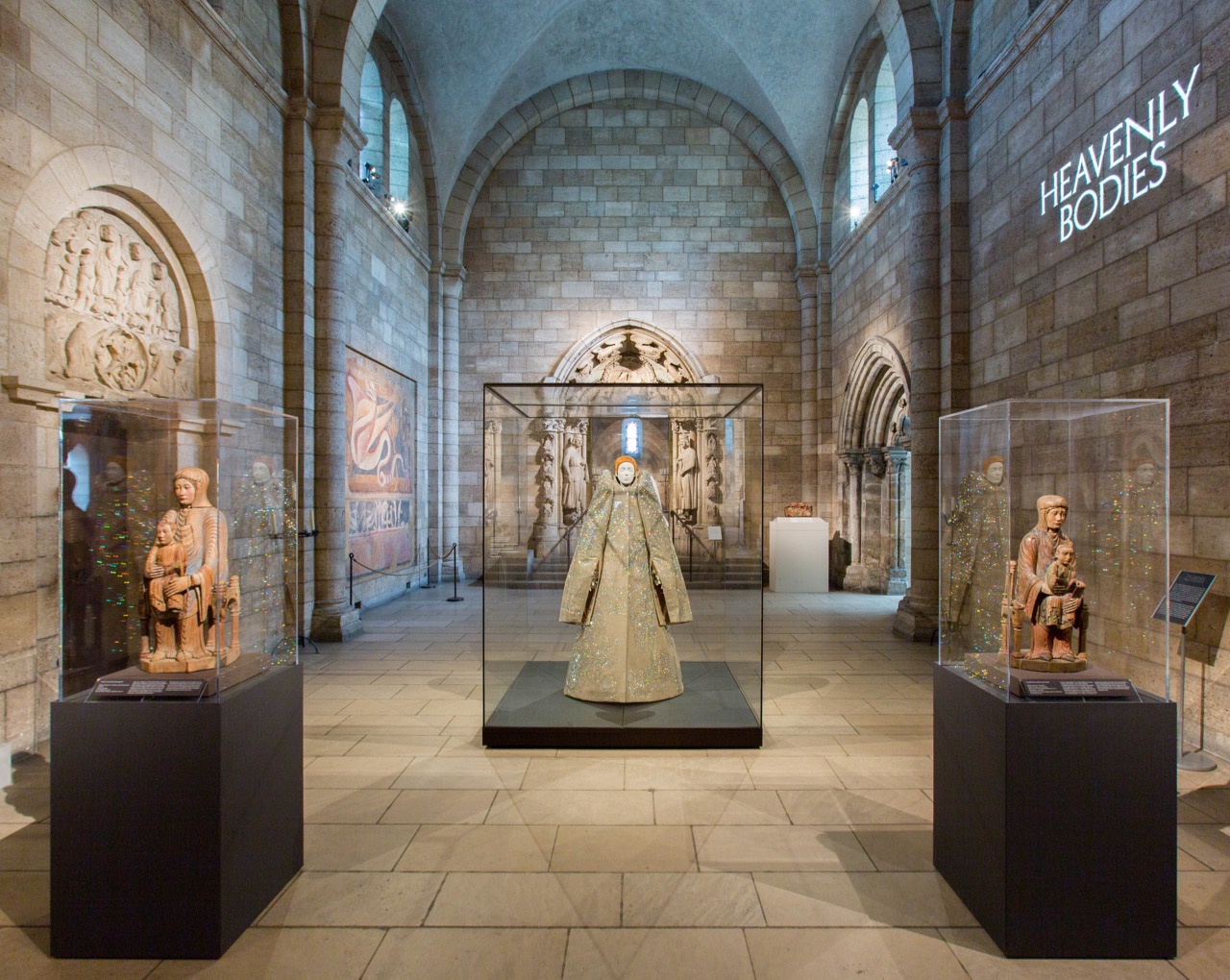 But if the show’s curators were hoping to spark a conversation between the Met’s great collection of medieval artworks and contemporary fashion—well, for me at least, that didn’t happen, and it still feels like something of a missed opportunity. It’s a struggle to turn away from the fashion world’s brilliant excess and bombast, and toward the wooden Madonnas and limestone saints displayed in these galleries where few people usually linger to consider the world of devotion, so different from our own, that gave rise to them. Yet that distant past is also worth imagining.

For over two decades, New York–based author and cultural critic Leslie Camhi’s essays on art, architecture, books, fashion, film, and women’s lives, including her own life and travels, have appeared in major US publications, such as the New York Times and Vogue. The author of numerous catalog essays on artists (and one legendary art dealer, Ileana Sonnabend), she also holds a doctorate in comparative literature from Yale University, and her scholarly publications include essays on female kleptomania and nineteenth-century French medical photography. When she was very young she lived in Rome and worked beside monks in the Vatican Library.