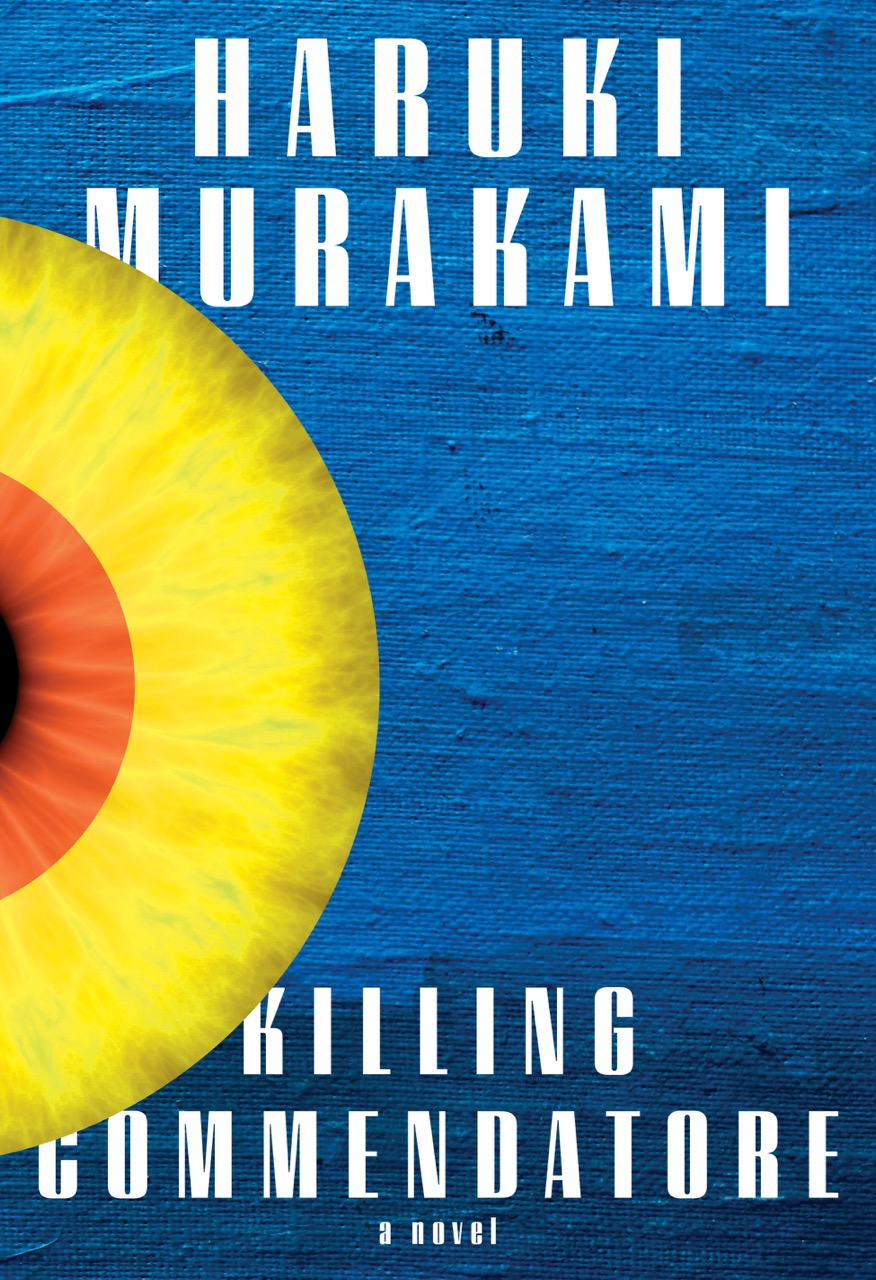 Some afternoons, when I’m alone in the house and trying to write, I find myself on a slow drift, involving fussy household rituals, staring at the ceiling, long naps with a cat on my chest, and a self-consciously curated classical soundtrack playing in the background. It’s not unlike the cozy existential void inhabited by so many of Haruki Murakami’s solitary protagonists, who endlessly cook pasta and spin vintage vinyl while the uncanny seeps into the vacuum of their days. As for me, the kids get home from school, and my emptiness is once again filled with the mundane and lovely business of family. Like millions of other readers, I turn to Murakami for a taste of alternate reality.

With baffling disappearances and reappearances, impregnation through dreams, and a ferryman without a face crossing a river of metaphors, the Japanese novelist’s latest tome, Killing Commendatore, seamlessly rendered into English by Philip Gabriel and Ted Goossen, makes strange with the best of his work. Before even turning the first page, you might be wondering: “Killing who?” “Commendatore” doesn’t sound very Japanese. In fact, it’s Donna Anna’s father, cut down by Don Giovanni’s sword in the very first scene of Mozart’s opera. As in much of Murakami’s oeuvre, music runs through Killing Commendatore, ranging from Don Giovanni and Der Rosenkavalier to Monk’s Music and Springsteen’s The River, along with an uncharacteristic detour to 1980s pop (the Go-Gos and Bananarama). But it’s another art form, painting, that takes center stage in this work.

Don Giovanni enters the novel, and the narrator’s life, via a canvas titled Killing Commendatore, which transposes this bloody operatic scene from eighteenth-century Spain to seventh-century Japan. The work is by Tomohiko Amada, famed for his traditional Japanese style. Now in the grip of dementia, Amada has been moved to a nursing home, and Killing Commendatore has been seen by no one until the narrator—a nameless, thirty-something, Western-style portraitist going through a painful divorce—takes up residence in Amada’s isolated mountain home. The younger artist discovers the painting hidden away in the attic, and is immediately entranced by this odd masterpiece, which seems so freighted with secret personal significance. Aside from the murdered figure of the title, Killing Commendatore also features something that’s not from Mozart’s opera: a man with a strangely elongated head popping up from a trapdoor in the ground.

This being Murakami, we’re definitely looking down some kind of rabbit hole here, an underground passageway to a dark and whimsical Wonderland. In fact, you could say that Killing Commendatore’s narrative is full of holes: around the same time, the sound of a disembodied nocturnal bell leads the narrator to a mysterious circular pit underneath a pile of rocks behind Amada’s house. It turns out to be a kind of tomb where a Buddhist monk may have been buried alive as a way of attaining nirvana in a truly creepy ritual called zenjo. Once the painted hole and the physical one are both uncovered, the Commendatore in Amada’s canvas suddenly appears in the narrator’s studio as a two-foot-tall, self-described “Idea,” full of helpful advice in navigating the ensuing weirdness. (A telling difference between Mozart and Murakami: Don Giovanni has the Commendatore return as the Stone Guest, who drags Don Giovanni to hell; in Killing Commendatore, he comes to life as a kind of friendly garden gnome.)

Meanwhile, Menshiki—an elegant, enigmatic man who lives in a lavish modernist mansion across the valley—has commissioned the narrator to paint his portrait for a ridiculously large fee. A cross between Jay Gatsby and Bluebeard, Menshiki has a walk-in-closetful of secrets, including a hidden tie to Mariye Akikawa, a beautiful, self-contained thirteen-year-old girl whose life he surreptitiously observes through high-powered binoculars. For complicated and mildly louche reasons, Menshiki arranges to have the narrator paint Mariye’s portrait, a work that engages the artist on a deeper level than he’s ever experienced. (The novel is, among other things, an extended meditation on the nature of the artistic process.) He begins to feel connected again, to both his art and the world. This can be a dangerous thing, as he finds out when he sketches a third portrait, of the wonderfully named “man with the white Subaru Forester,” a troubling figure glimpsed in passing during one of the narrator’s bleakest periods, and who may represent a dark side waiting to be released.

Historical as well as personal evil bubbles up to the surface as the narrator uncovers more of Amada’s past, of which Killing Commendatore may be an allegory: Amada’s stint in post-Anschluss Vienna, where he became involved in a conspiracy that put him in the hands of the Gestapo, and Amada’s younger brother, a musician who committed suicide after being forced to participate in the Japanese atrocities during the invasion of Nanjing. All of this brings the story to the edge of a deeper and more interesting abyss, but unfortunately Murakami pulls back: these episodes are briefly summarized rather than brought to life. The Wind-Up Bird Chronicle, echoed in so many aspects of Killing Commendatore, remains Murakami’s masterpiece precisely because it grapples, in often grisly detail, with wartime atrocities and guilt; in that 1995 novel, Murakami’s engagement with history serves to anchor his writing, which sometimes threatens to float away on a cloud of dreamlike quirkiness.

Like Murakami’s multi-volume 1Q84, Killing Commendatore, which weighs in at just under 700 pages, manages to be both massive and light—a lead zeppelin, or a helium-filled doorstopper. This odd combination of densities is part of Murakami’s immersive appeal as a writer, and also his weakness. As is often the case, the female characters are mostly passive and any passion is muted. By leaving him for another man, the narrator’s wife Yuzu is the catalyst for his long, strange trip, but the entire narrative ends up being little more than an interlude—they get back together in a kind of might-as-well reunion (I’m not giving anything away here, as Murakami lets this particular cat out of the bag in the first chapter). A story of love and betrayal that should resonate throughout the novel terminates in a shrug. For all the fantastic sound and fury, nothing much has changed by its finish; Killing Commendatore is richly imagined but ultimately rather harmless.

Even so, when the novel came out in Hong Kong, it was banned from book fairs, classified as pornographic and sold in a special protective wrapper to readers eighteen and older. Killing Commendatore is mildly racy in places (the narrator’s affair with a bored housewife), but what must have attracted the censors’ ire was a particularly vivid and extended sequence of oneiric insemination—a dream-fuck leading to real-life pregnancy—that, more than anything else in the book, pushes the bounds of plausibility. Still, such an eruption of id is welcome in a novel that, like much of Murakami’s work, maintains a rather too-polite distance from its own excesses and mysteries.

Jean-Christophe Castelli is a New York City–based producer and screenwriter, most recently on Ang Lee’s 2016 feature, Billy Lynn’s Long Halftime Walk. He is also the author of The Making of Life of Pi (Harper Design, 2012), and his writing has appeared in Vanity Fair, Esquire, Elle, the Village Voice, and other publications.