Film
If Beale Street Could Talk 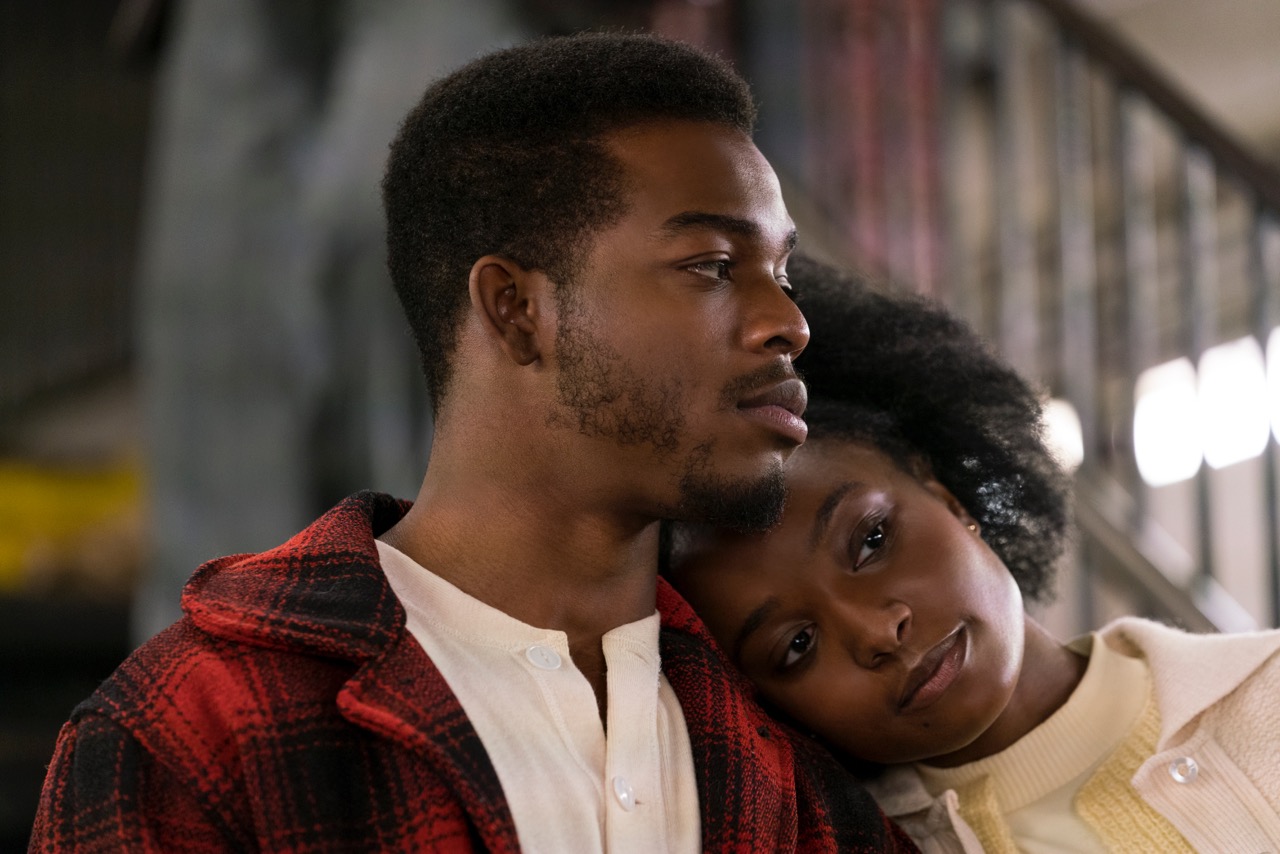 If Beale Street Could Talk, written and directed by Barry Jenkins, opening December 14, 2018, in New York and Los Angeles

Like the art-house legends he most reveres—Wong Kar-wai, Claire Denis—Barry Jenkins is a dyed-in-the-wool sensualist, a filmmaker who trusts beautiful sounds and images to get at the messiness of human experience. No matter how desperate the characters or modest the settings, his movies are calibrated for maximum ravishment: gorgeous faces light up the screen, vivid colors pop out of the shadows, music swells without apology. Watching his Oscar-winning Moonlight and the new If Beale Street Could Talk, an adaptation of James Baldwin’s 1974 novel, we’re constantly reminded of what so many movies revolving around themes of oppression fail to acknowledge: that even under threat, love can still feel like love—which is to say, like a state of rapture.

Moonlight was a powder keg of heavy subject matter—black male identity, queerness, incarceration, drug addiction—that came to rest on the delicate image of one man’s head lying on another man’s shoulder. Jenkins is a connoisseur of these kinds of touches, and he knows how to evoke the distance that some of us have to travel to find comfort in any embrace. In Beale Street, he depicts the relationship between nineteen-year-old Tish (KiKi Layne) and her sculptor fiancé, Fonny (Stephan James), with a similar sensitivity to bodies in furtive contact. Acquainted since childhood, the protagonists develop a familial intimacy long before anything romantic blossoms between them, and they speak to each other in hushed tones, as if protecting a shared memory of their youth. As seen through Jenkins’s compassionate gaze, which accompanies them through the streets, parks, and subways of 1970s New York, their grown-up chemistry is a natural extension of how protective they’ve always been of each other. When they make love for the first time, the scene is rendered not with the marathon athleticism found in the book (“if we did not breathe again soon, I knew we would die”) but as a sweet, hypnotically slow seduction, with Fonny at one point throwing a bedsheet over Tish’s trembling naked body. 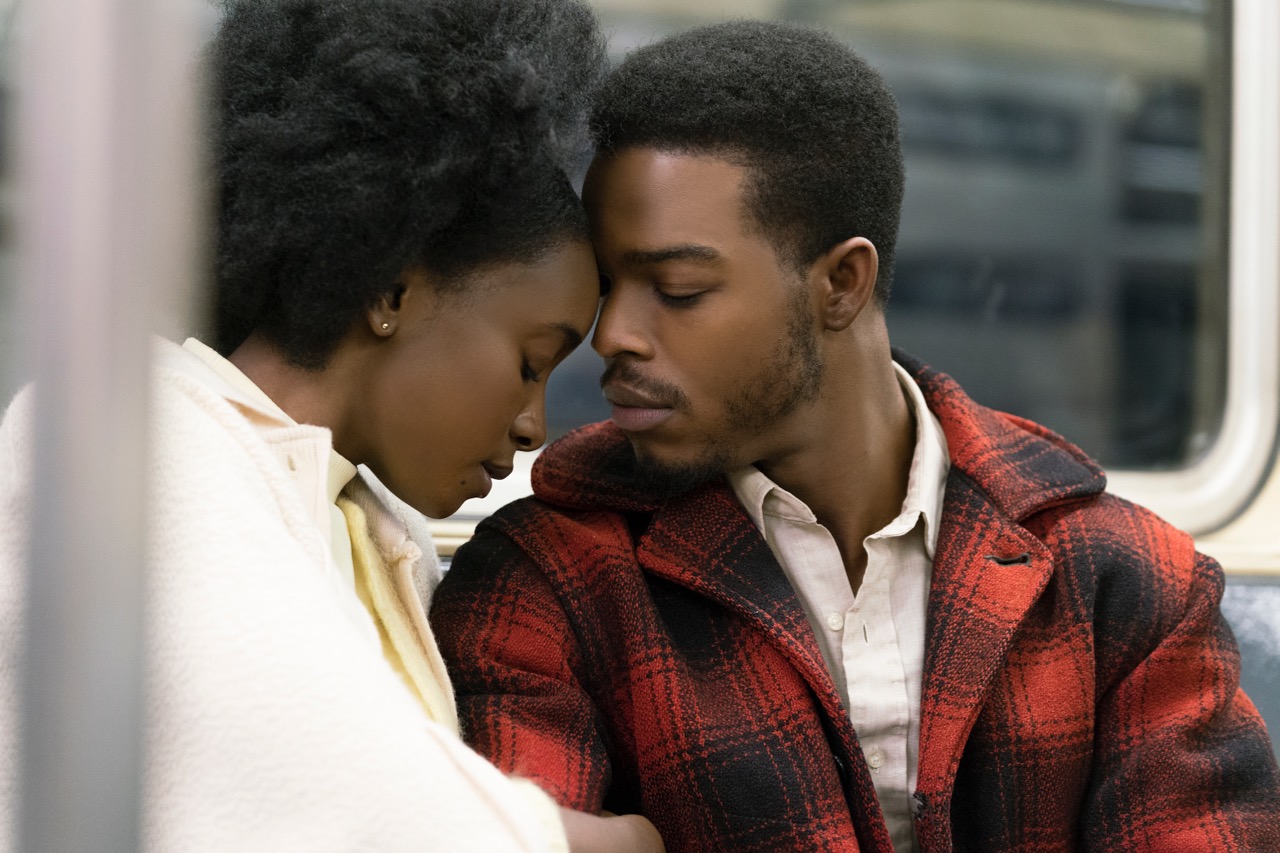 KiKi Layne as Tish and Stephan James as Fonny in If Beale Street Could Talk. Photo: Tatum Mangus / Annapurna Pictures.

You’d be hard-pressed to find a romance this innocent in any other recent American movie, and if it weren’t for Jenkins’s unironic commitment to the goodness of his characters (and the way that goodness seems to radiate through every space they occupy), this aspect of the film might strain credulity. But Beale Street is more than a melodrama about two angelic young lovers. As much as Jenkins revels in Tish and Fonny’s private world, he’s even more interested in how their relationship functions within a broader tapestry of black American life—and how their network of loved ones lifts them up when trouble comes knocking. Soon enough, we learn the central injustice they must battle against: Fonny lands in jail after a Puerto Rican woman, manipulated by a racist police officer, falsely accuses him of raping her. At the same time, Tish is met with polarized reactions when she discovers she’s pregnant with Fonny’s child. With these two conflicts mapped out early on, the film brings the outside world in, forcing the couple to lean on the support of their closest allies. 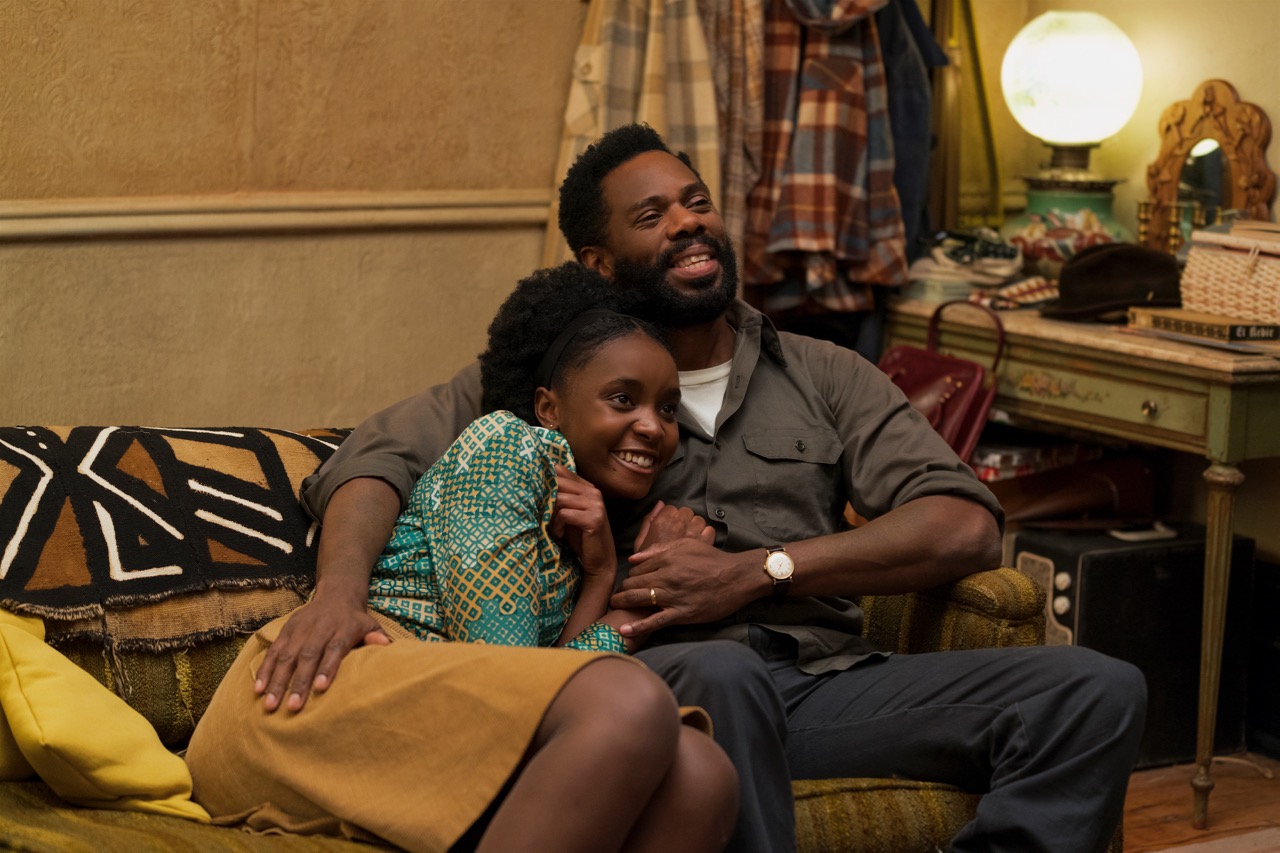 KiKi Layne as Tish and Colman Domingo as Joseph in If Beale Street Could Talk. Photo: Tatum Mangus / Annapurna Pictures.

If Beale Street’s love story risks getting a bit mushy, it ultimately finds its footing as a family affair. Jenkins follows Baldwin’s lead by introducing a host of strong-willed supporting characters who orbit around the heroine: Tish’s nurturing parents (beautifully portrayed by Regina King and Colman Domingo) and sharp-tongued sister (Teyonah Parris), and Fonny’s hot-tempered father (Michael Beach), Bible-thumping mother (Aunjanue Ellis), and sadiddy sisters (Ebony Obsidian, Dominique Thorne). Though mostly fueled by dialogue lifted from the novel, much of which carries a lyrical cadence that can sometimes feel stilted on the screen, these ensemble scenes end up having a live-wire immediacy. The film replicates the fragmentary, non-chronological structure of the novel, but it also gives individual sequences the room to sing with a deeper resonance. It’s easy to imagine these scenes being edited much more tightly in a Hollywood production, but Jenkins allows them to reveal their dynamics slowly, as in a tense standoff between Tish’s and Fonny’s families that turns into a nearly screwball display of verbal one-upmanship. 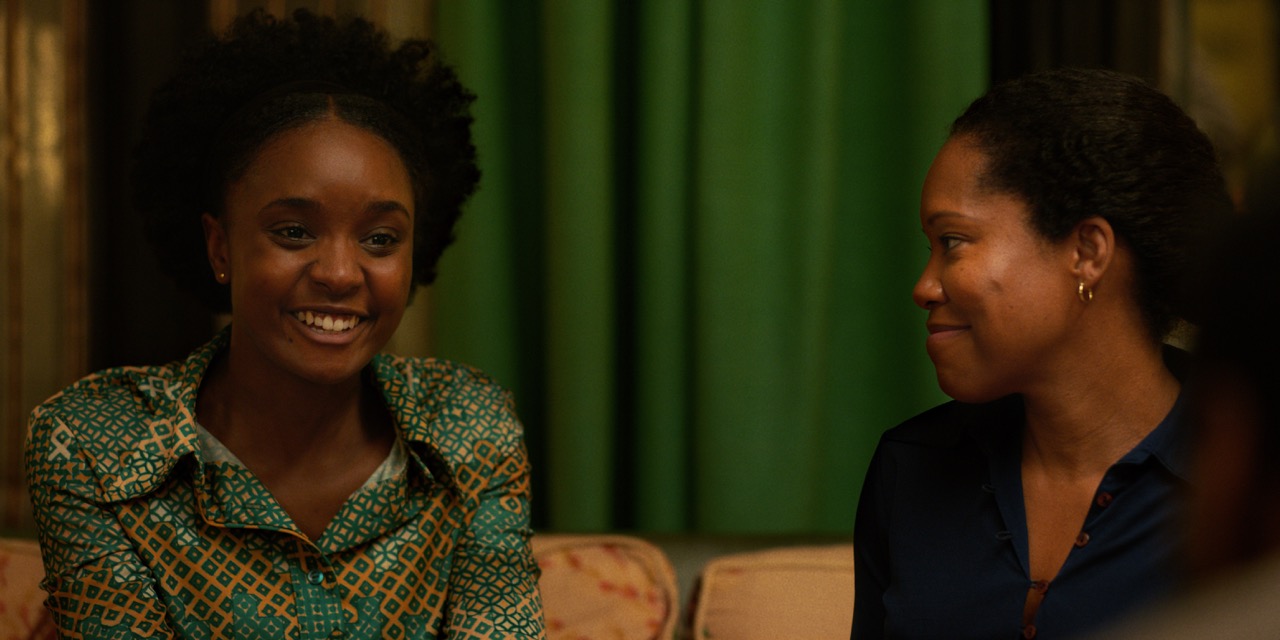 KiKi Layne as Tish and Regina King as Sharon in If Beale Street Could Talk. Photo: Annapurna Pictures.

After Moonlight, which plays as a solitary odyssey punctuated by interludes of hard-won connection, it’s a joy to see Jenkins trying his hand at orchestrating a boisterous scene like this, deftly navigating the challenges of a large number of characters and ping-ponging dialogue in an intimate space. It’s also moving to witness the ease with which he depicts a community coming to the defense of one of its own, without question or hesitation. As Fonny’s case becomes more precarious, we get a side of the story very different from the dreamy romance that opens the film: a deeply Baldwinesque vision of black love as never-ending labor, as a kind of tireless vigilance. We see this in how Tish’s parents fight for their soon-to-be son-in-law, her mother heading to Puerto Rico to convince his accuser to recant, and her father craftily endeavoring to raise money to pay for the costly defense. Tish and Fonny’s relationship is a form of mutual protection in a cruel world, and the family unit—Tish’s, at least—provides further armor. 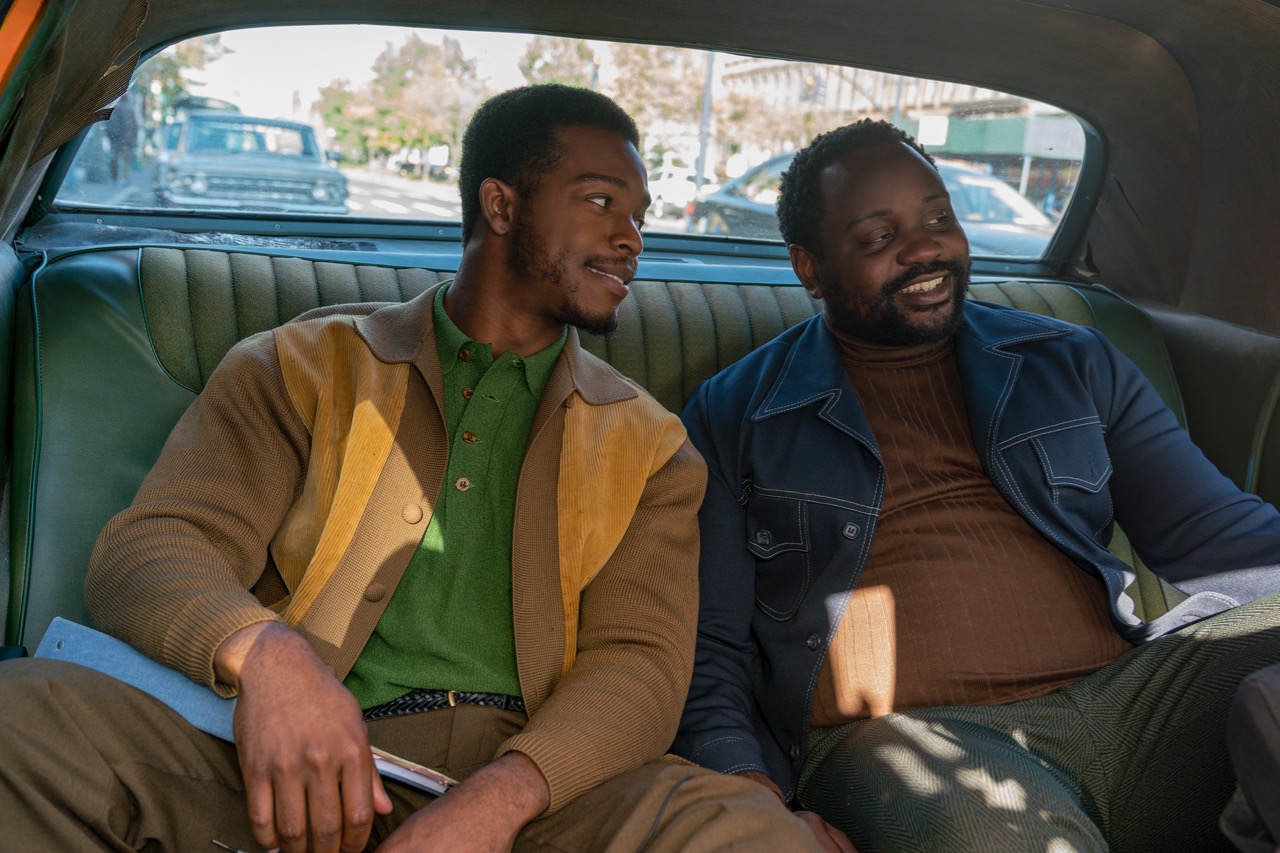 There’s a desperate loneliness, though, in the fact that Fonny doesn’t get to share in this unity. The film, like the book, inhabits the perspective of Tish while she’s pregnant, so we see Fonny primarily as a figure of the past, a memory she works hard every day to keep alive. But unlike Baldwin, Jenkins doesn’t try to give us an image of what Fonny’s experience in jail is like. He works, instead, through implication. In a brief, piercing scene that haunts the rest of the film, Jenkins yields the spotlight to a character who can at least help us imagine that struggle—a recently released inmate (Brian Tyree Henry) who tells Fonny, before he himself is sent to jail, about the violence he endured in prison. “The white man has got to be the devil,” he whispers, with all the disquiet of a victim in a horror movie. Fonny extends his hand to comfort his friend but finds him frozen in his terror, unreachable. In a film pulsing with great warmth and tenderness, this is the scene that will stop you cold—a reminder that love, no matter how steadfast or pragmatic, is still at the mercy of a broken world it can never quite transcend.