Mourning in the shadows: the latest from Portuguese auteur Pedro Costa. 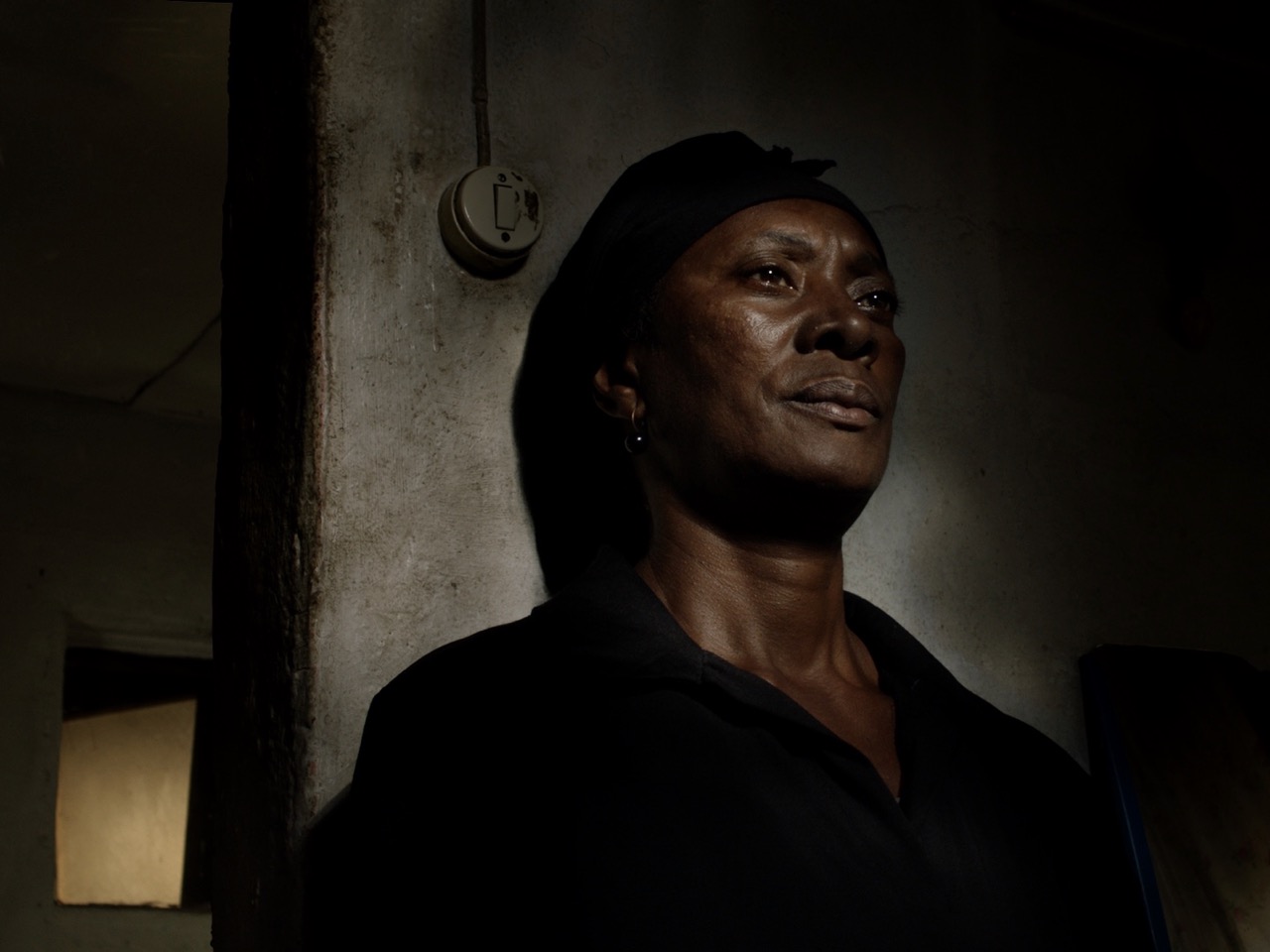 “After great pain,” Emily Dickinson famously wrote, “a formal feeling comes.” What better way to explain the stately, molasses-slow momentum of Pedro Costa’s Vitalina Varela, a study of mourning in which it’s not just human bodies but time and space themselves that are weighed down by loss? We first meet the bereaved, middle-aged title character (based on and named for the woman playing her) as a spectral shadow emerging from an airplane. Everything about this introduction is calibrated to underscore the gravity and ceremonial deliberation of her movements: her swollen legs are framed in close-up; drops of urine leave a trail behind her on the tarmac; and the funereal silence enveloping her indicates the degree of focus she needs just to put one foot in front of the other. This is a film that understands that, for a grieving person, simply going through the motions can become an all-consuming form of labor. 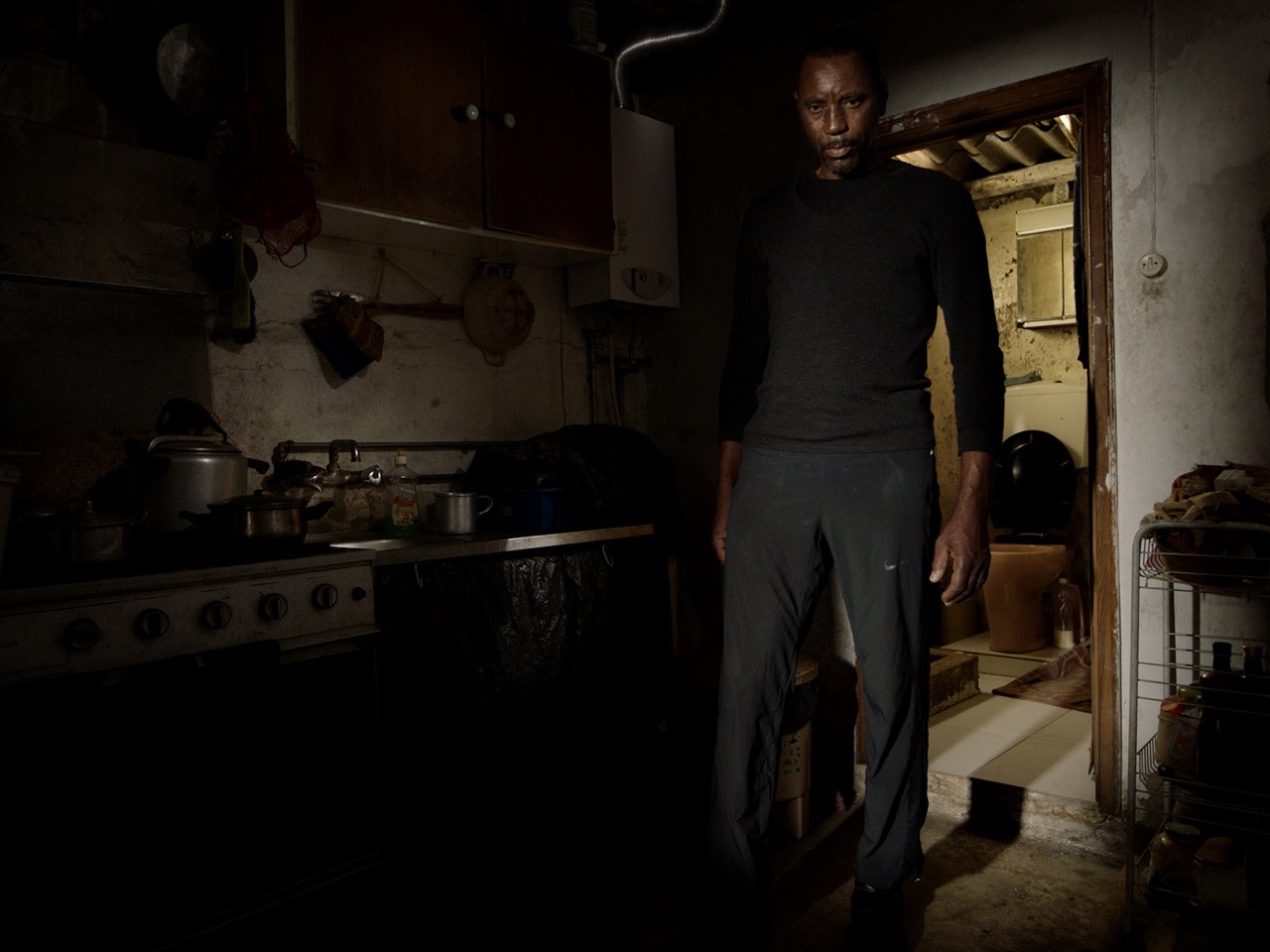 We get to know Vitalina through her inertia. She’s traveled all the way from Cape Verde to an impoverished corner of Lisbon expecting a tense reunion with her husband, a migrant worker who abandoned her without warning decades ago and has reportedly taken ill. (The “plot” of Vitalina Varela, such as it is, loosely recounts the actual timeline of the death, in 2013, of Vitalina’s husband and her arrival in Portugal.) Immediately upon landing she finds out he’s dead, and lacking any reason either to return home or to stay in this unfamiliar country, she’s forced into a state of suspension. Whiling away the days in a crumbling house her husband built with his own hands, she repeatedly bumps her head on the low doorframes and hurls lamentations at the walls in a breathless, dry-throated croak, barely moving her lips or blinking her eyes. Every now and then, neighbors come by to join her in mourning, but it’s not clear how well she knows any of them or whether she cares to. Time passes, and Vitalina’s face—imperceptible in that early scene on the tarmac—becomes our visual anchor. But it’s a mask of intimidating restraint. 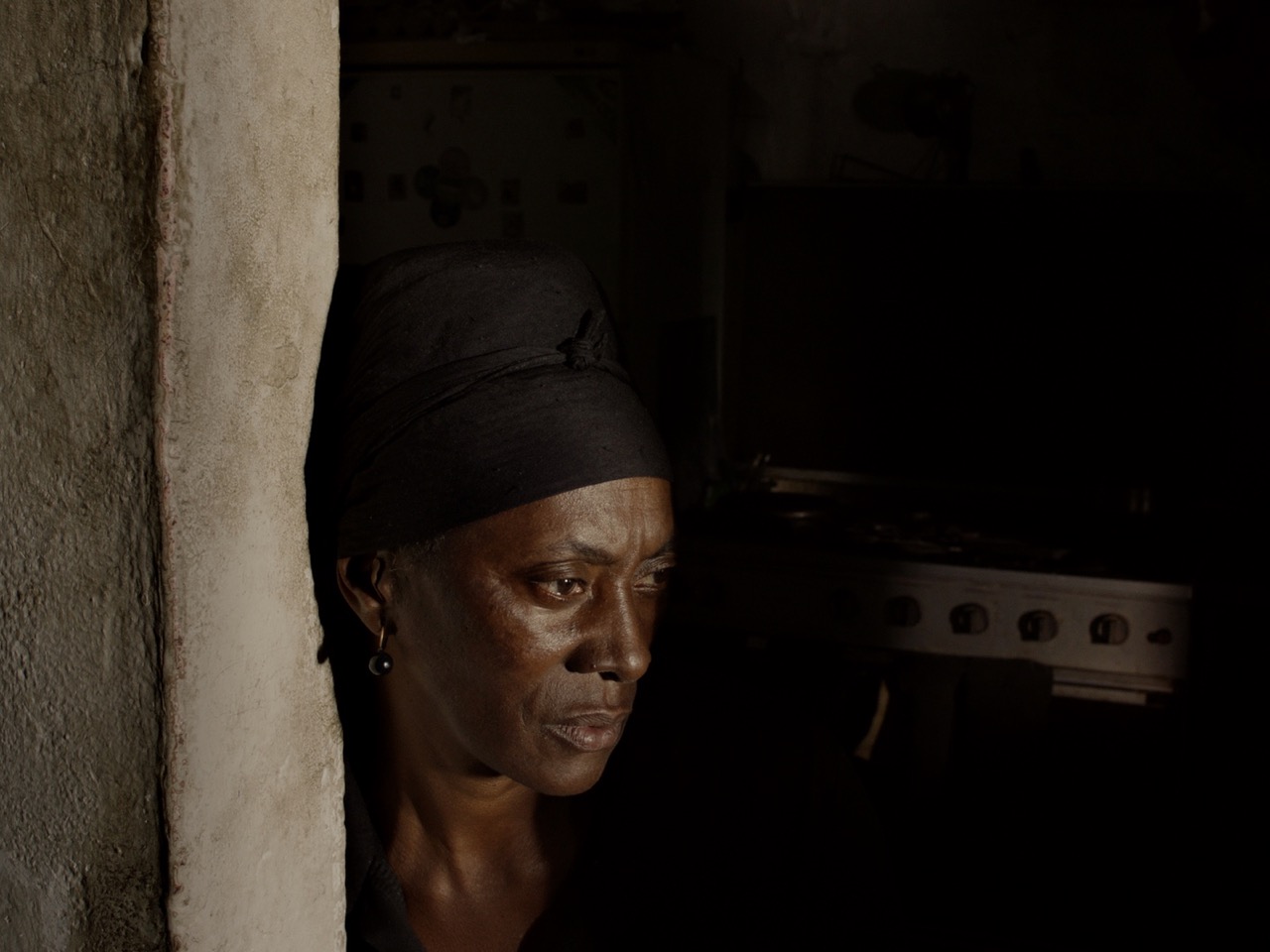 There’s something paradoxically expressive about that restraint. Despite being a nonprofessional actor, Vitalina (who won the Best Actress award at last year’s Locarno Film Festival, where Costa’s movie also took the top prize) has an instinctive flair for the theatrical, and she knows how to piece together the slightest physical details—the curve of her arm, the stiffening of her mouth, the loosening of her headscarf—to suggest vulnerabilities hidden behind her magnificent visage. Her actions unfold not at real-world speed but in a kind of hyper-choreographed slow motion, as if the house were spinning on a separate axis.

Costa—as he has done with a few other performers in the past—shoots her with a mix of human-scale tenderness and heroic monumentality. In interviews, the director likes to compare his cast to the icons of classic Hollywood, and more than any of his previous films, Vitalina Varela shows us an artist far less driven by notions of sociological representation than by old-fashioned star power, that unnerving ability some people have to hold an audience’s attention. The movie’s premise wouldn’t be all that out of place in a mainstream tearjerker, and that’s part of what makes Vitalina Varela such a singular addition to Costa’s oeuvre: it’s about as close as you can imagine the Portuguese auteur ever getting to a traditional melodrama.

Known primarily for his Fontainhas films—Ossos (1997), In Vanda’s Room (2000), and Colossal Youth (2006)—Costa has spent the better part of his career carrying on the tradition of a stringent European aesthetic distinguished by long takes, psychologically opaque characters, and an almost complete lack of emotional relief valves. In that landmark trilogy—which grew out of a radically streamlined method of shooting, as well as the friendships he developed with residents of one of Lisbon’s most marginalized shantytowns—Costa’s visual approach was one of persistent unease. Even as his style evolved across these three films, the exquisite refinement of his compositions was constantly butting up against the squalor of the settings and the grimy surfaces of cheap digital cinematography. In contrast, Vitalina Varela, for all the psychic and economic devastation it depicts, is beautiful to the point of being ravishing. Shot after shot reminds us that Costa’s cinephilic allegiances have always lain not just with austere, high-art divinities like Robert Bresson and Jean-Marie Straub and Danièle Huillet, but also with Jacques Tourneur, a B-movie master who knew how to dazzle the eye on a miniscule budget. 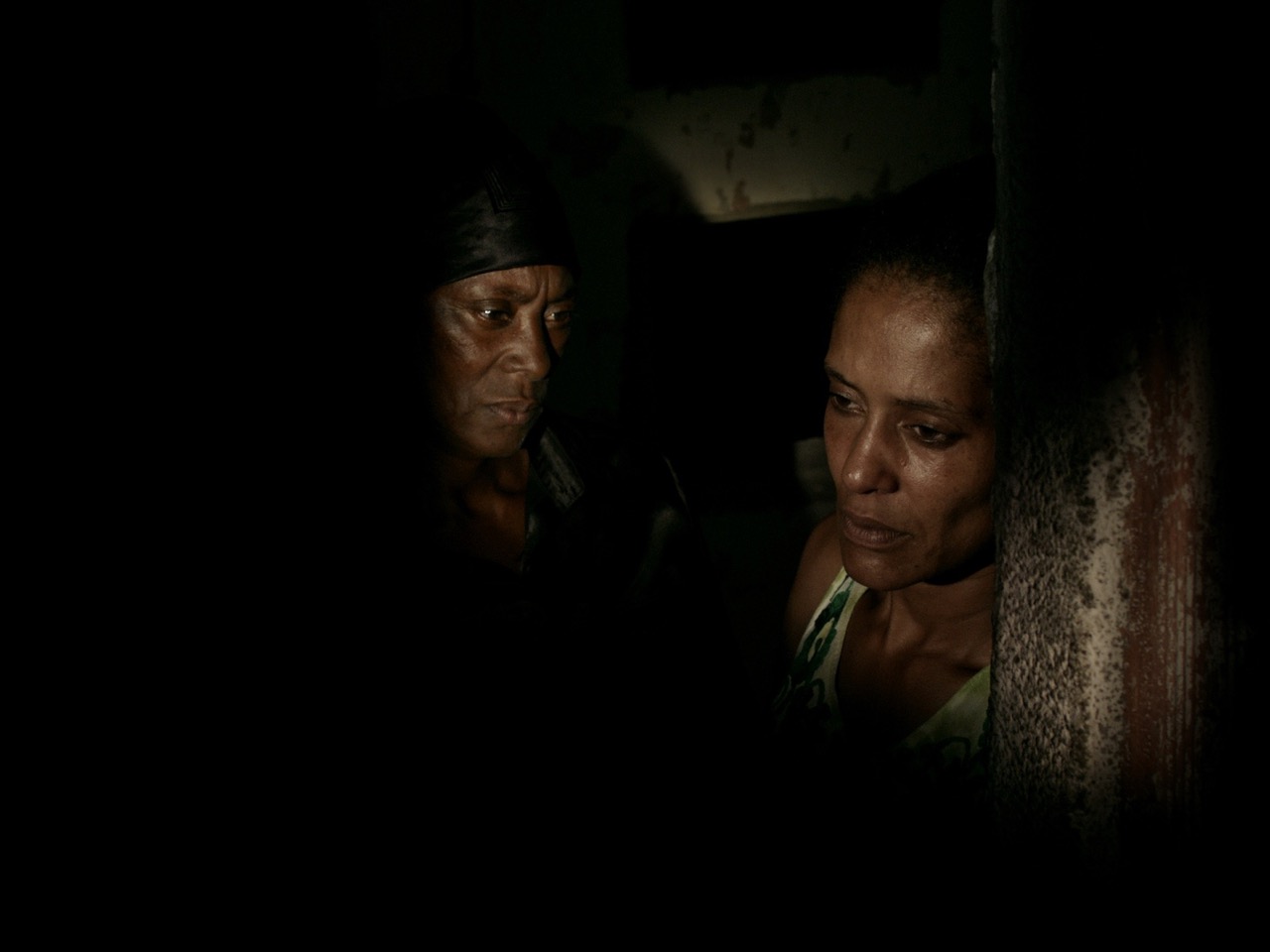 Like Tourneur’s horror films, Vitalina Varela is a tapestry of inky black shadows—and at several points it feels like one of the most dimly lit movies in recent memory. In one scene, the heroine’s face looms large in close-up, but the most visible thing is the moisture in her eyes, like stars twinkling in a perpetual night. The darkness is made all the more overpowering by the blatant artificiality of Costa’s lighting, which meticulously delineates our field of vision, transforming the domestic spaces Vitalina drifts through into sites of otherworldly abstraction. At times, everything we’re given to look at—a collection of framed family photos, a line of handbags hanging on a wall—seems to have been painstakingly sculpted out of the shadows. One unforgettable shot resolves with a door being closed in our faces, illuminating a patch of brilliant blue paint that’s held on screen several beats longer than we expect.

Such sensuous immediacy is rare in Costa’s world, and was mostly absent from Horse Money (2014), alongside which Vitalina Varela forms an unofficial diptych. That film centers on Ventura, another aging Cape Verdean immigrant who has become a recurring figure and artistic collaborator in the director’s work. The character of Vitalina made her debut there, narrating the story of her deceased husband in incantatory monologues. But Horse Money is so labyrinthine and willfully indecipherable that viewers would not be wrong to interpret her as a figment of Ventura’s haunted imagination. 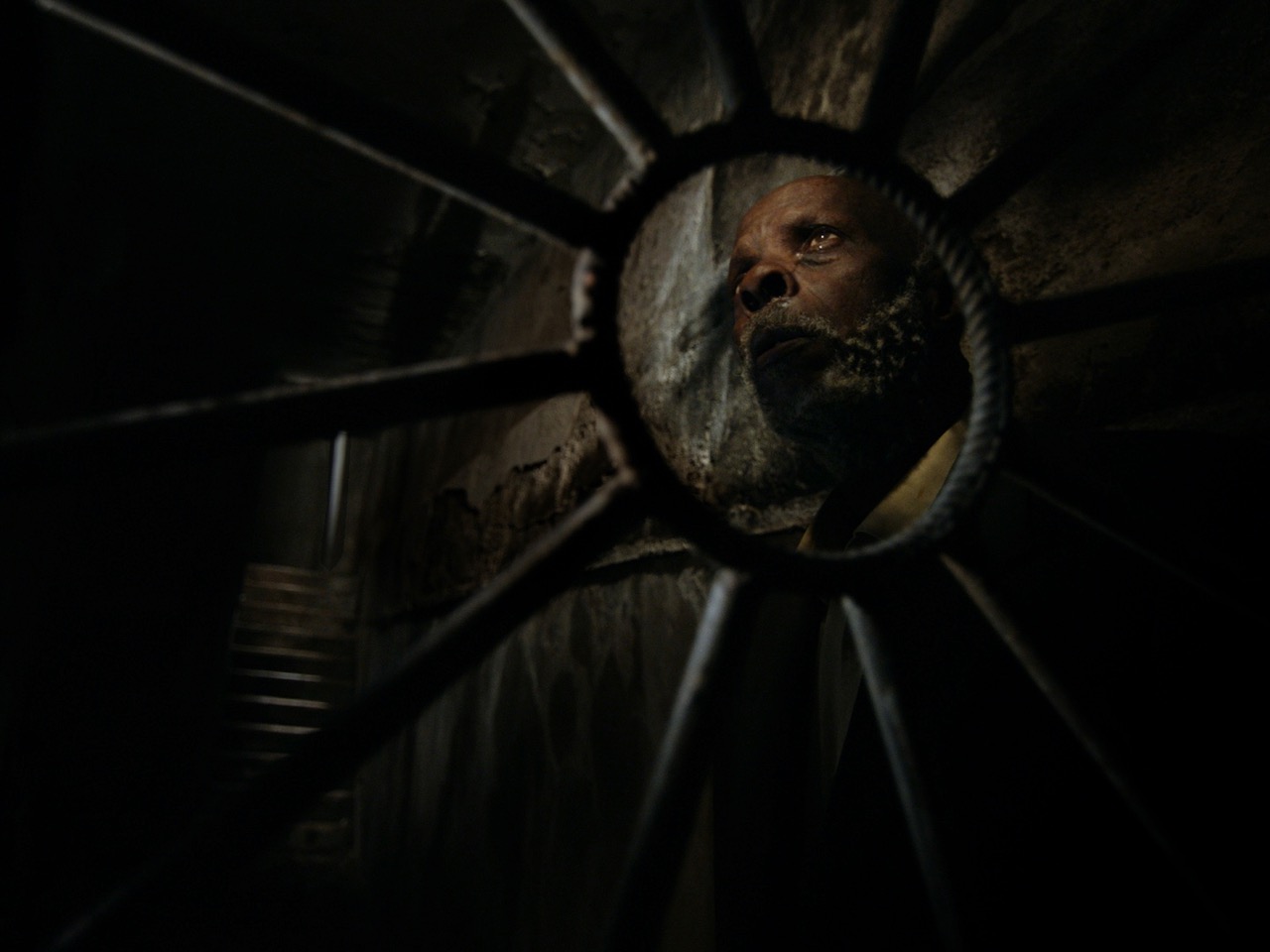 Operating for the most part as a one-woman show, Vitalina Varela poses a different dynamic between the performers, giving a palpable new weight to her struggle and recasting Ventura as a secondary, seemingly different character, the priest of a flockless church. Costa once said that he wanted to make a movie version of Stevie Wonder’s Innervisions, and perhaps this is his way of trying to create an A-side/B-side structure, of flipping the record. But it’s not essential to have seen Horse Money to feel moved, even shattered by his new film. Vitalina Varela stands gloriously on its own, offering a visceral—dare I say “accessible”?—entry point to one of the most enigmatic bodies of work in contemporary cinema.