With her graphisms, the Argentine artist explores the unstable
nature of writing. 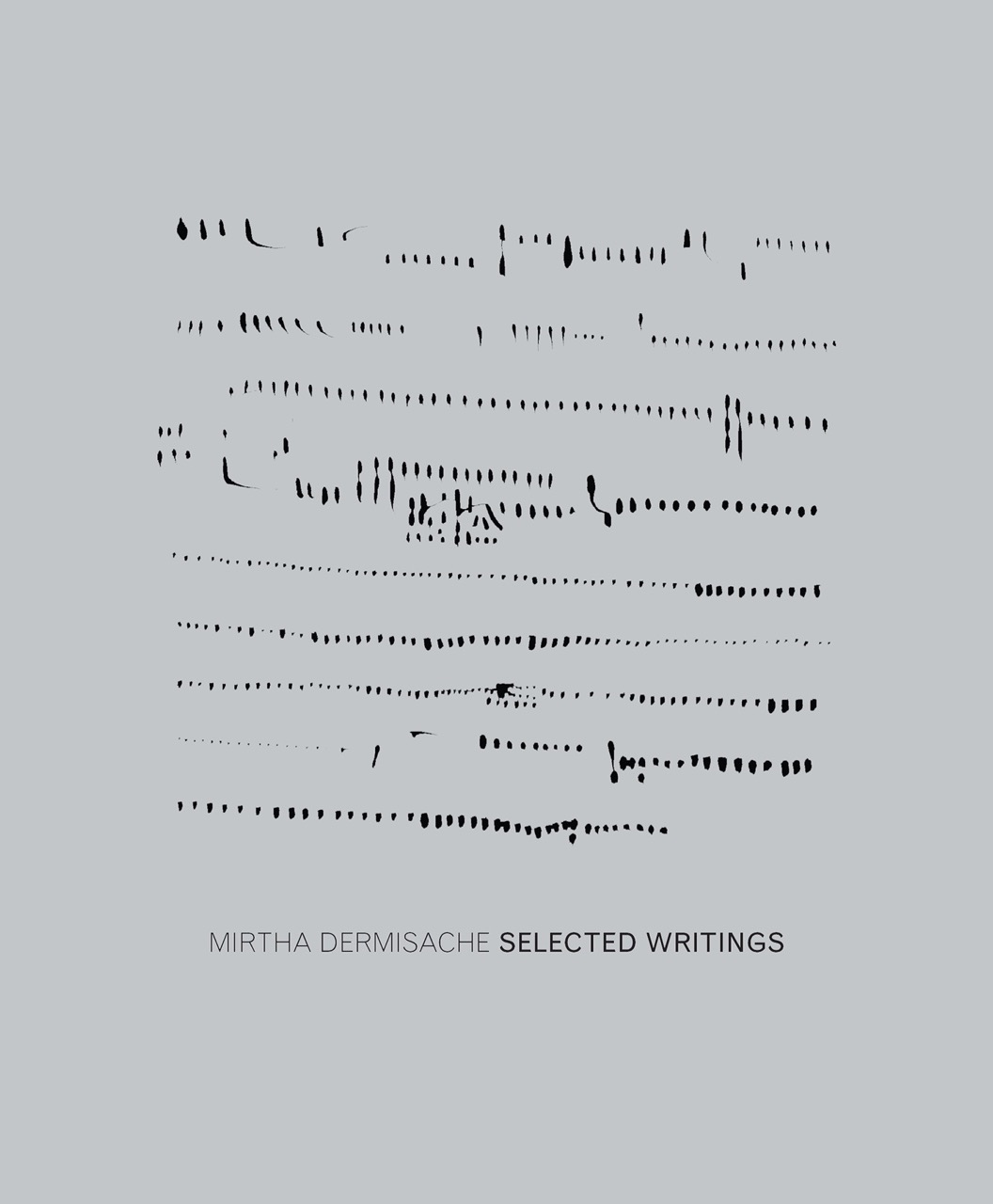 A recent exhibition at New York’s Henrique Faria gallery and the release of Selected Writings, copublished by Siglio and Ugly Duckling Presse, have materialized the enigmatic aesthetic project of Mirtha Dermisache (1940–2012), offering her a long overdue presentation to North America. Dermisache first became active in the 1960s in her native Argentina. There, she initiated her career as an art instructor to children at educationally innovative schools and participated in collaborative interdisciplinary projects at the Center for Audiovisual Experimentation, housed in the Torcuato Di Tella Institute (the epicenter of Argentina’s aesthetic and cultural renewal in those years) and the Centro de Arte y Comunicación (CAyC). 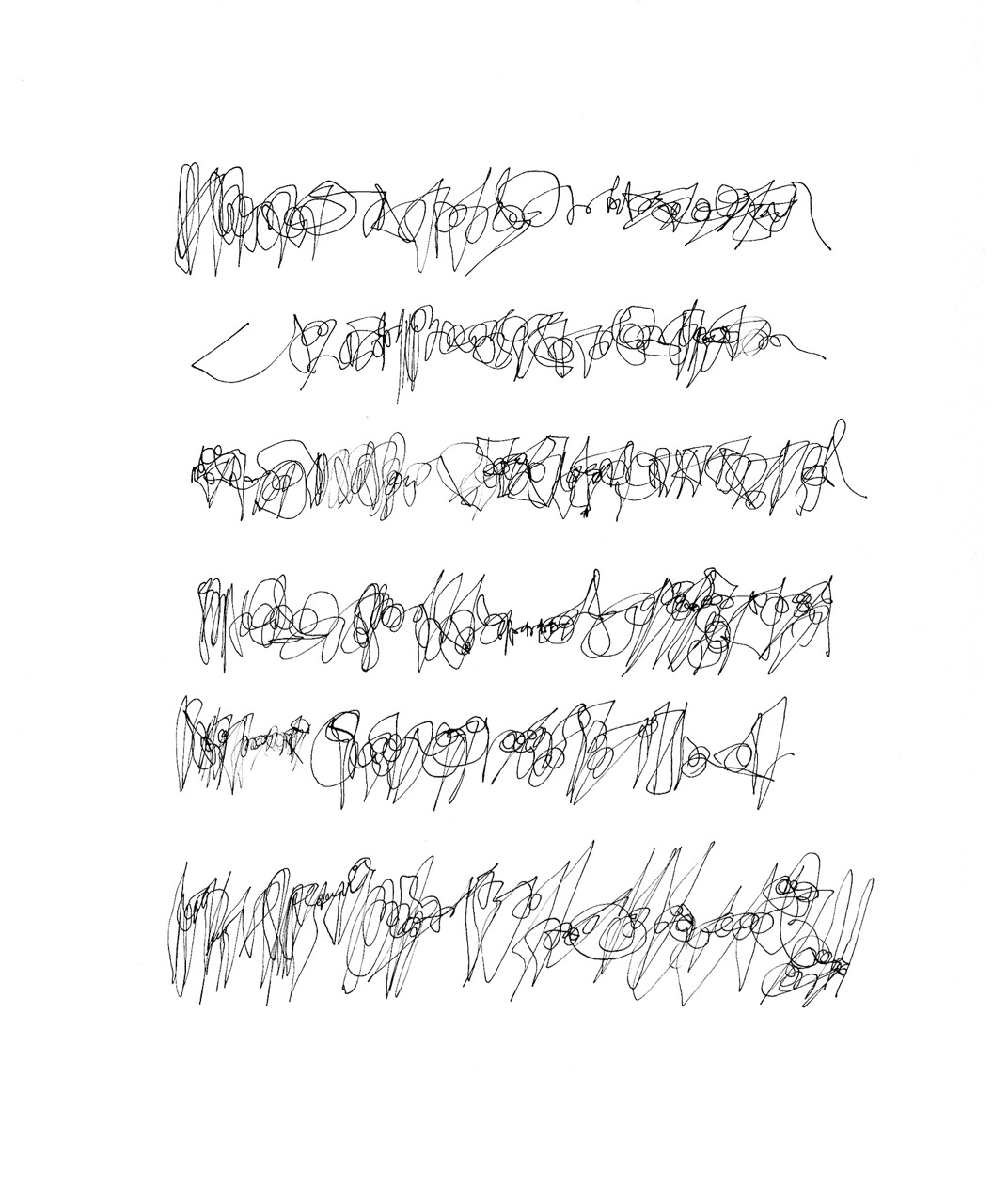 At the same time, she began making fragmentary jottings of unreadable symbols—“graphisms,” one might call them. From the outset, she always kept notebooks on her person and would use them at any opportunity. Her dedication to and identification with this practice made it her hallmark. Life and work gave rise to a mysterious character who, on sheets of paper and cardboard, and with great concentration, would tirelessly draw—or should we say write. In this sense, the coincidence of the two events that mark Dermisache’s US introduction could not be more relevant, because both orderings—gallery walls, on the one hand, and bookshelves, on the other—are the spaces, at times in opposition, for this artist’s intervention and presence. As a writer, Dermisache longed to be published; as an artist she resisted hanging those same works on walls. It would be better to say it the other way around: as a writer she didn’t want to exhibit in galleries, and as an artist she wanted solely to publish her works.

This opposition enfolds a second more fundamental paradox: her unreadable graphisms present themselves as artifacts of reading. She made books, postcards, newspapers, letters, texts, informational bulletins, texts for signboards, explanatory posters, written pages, comic strips, stories. These are the names they were given, but, I reiterate, none of them can be read, even when the stroke used in each resembles a written character. To those formats we must add one that is especially eccentric within the exquisite, discreet extravagance of her graphisms: “public readings”—sheets of paper on which one or several marks expand a figuration of the spoken word embodied in great storm clouds of suspended calligraphy. 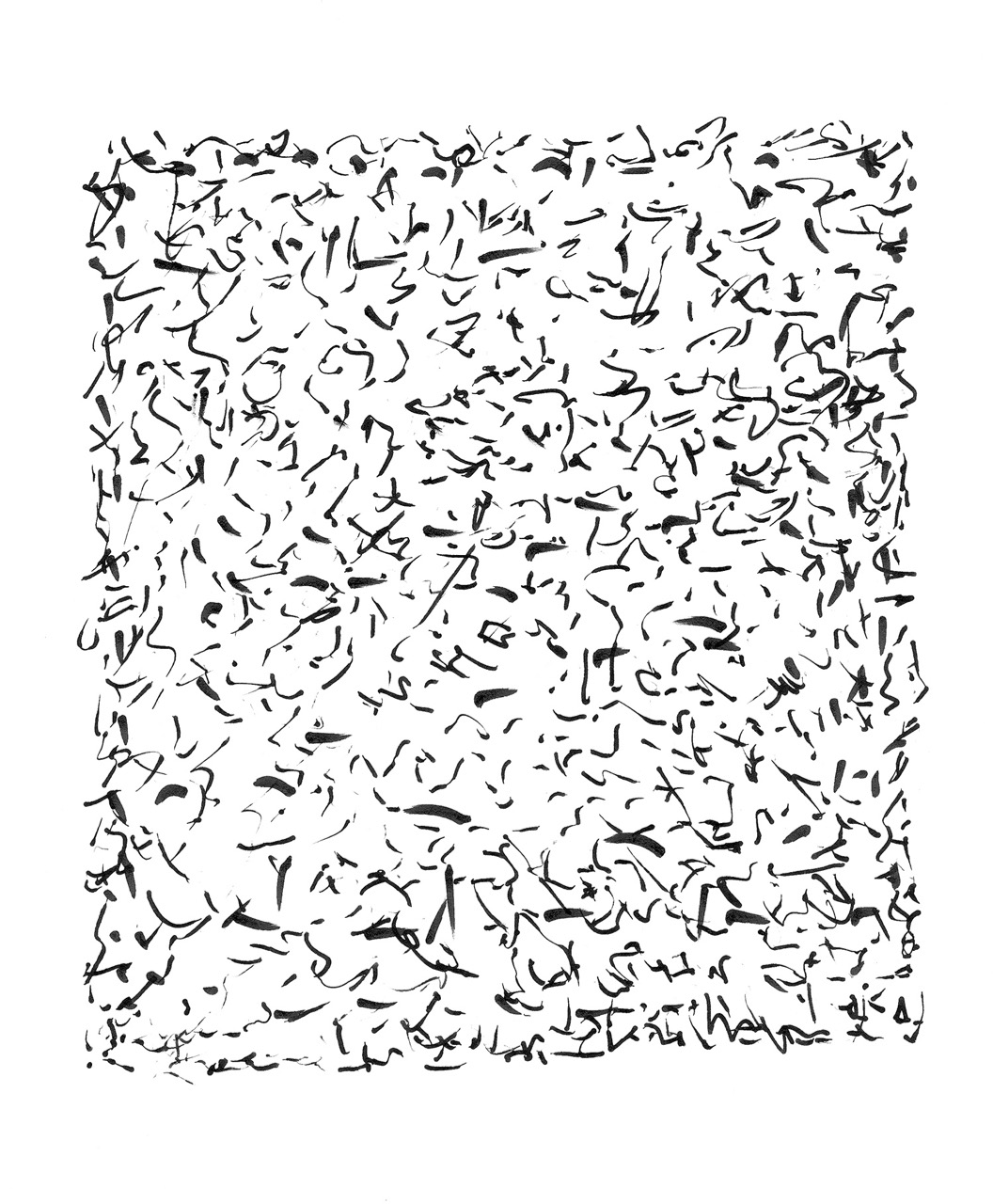 The basic experience is that everything seems apocryphal—and above all unstable—in Dermisache’s writing, because nothing is codifiable. The sublime unreadability of her art attracted the attention of experts, theoreticians, and creators: a writing that contains all possible writings because it says nothing. Roland Barthes was the best known of those who felt the impact. In 1971, he sent Dermisache a subsequently famous letter of aesthetic recognition and conceptual admiration. His missive resulted in an epiphany, but a suitably ironic one: Barthes’s reading of Dermisache’s work made her feel, for the first time, truly understood and recognized as an artist. This led her to get to work immediately: in the long session that followed her receipt of the letter, she composed a new book. Selected Writings, coedited by Daniel Owen and Lisa Pearson, culls from this moment, Dermisache’s most prolific decade, gathering a selection of “texts” from the 1970s and reproductions of two books (Libro No. 1, 1972, and Sin título (Libro), 1971). 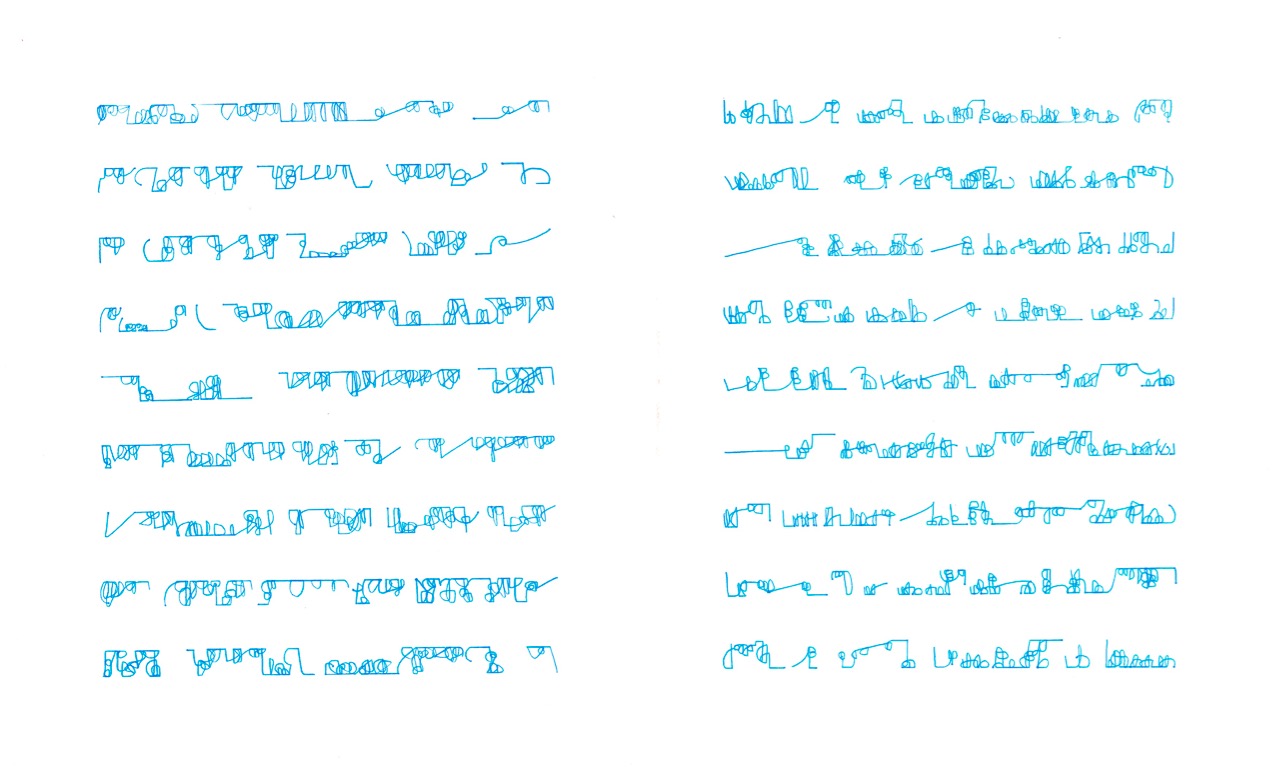 The years after Barthes’s letter also mark Dermisache’s rise to international prominence, with her participation in traveling exhibits and group shows in Europe and Latin America. In Antwerp she connected with Guy Schraenen and Marc Dachy, expert curators of artists’ books. The first’s support would be essential. In the mid-1970s Dermisache showed her work at the Internationaal Cultureel Centrum (ICC) in Antwerp, the Palais des Beaux-Arts in Brussels, the Camden Arts Centre in London, and at various institutes, museums, and galleries in other European countries.

But the frequency of her inclusion in these exhibitions subsequently decreased, in great measure owing to political vicissitudes in Argentina but also because Dermisache gradually grew closer to the world of artists’ books, in whose international network she felt more at ease and in which she participated more and more. In addition to Schraenen and Dachy, she established a relationship and worked on projects with the seminal Mexican book artist Ulises Carrión. In the last decade of her career, she met the French editor Florent Fajole, who contributed to her work the concept of the “editorial device” as a specific exhibition strategy, capable of bringing together the hybrid features—writerly, artistic, editorial, and curatorial—of Dermisache’s art. These editorial devices, formalized since then in various galleries in Argentina and Europe (some of whose characteristics were on view at the Henrique Faria exhibit), consist of specific spatial adaptations for exhibiting and manipulating Dermisache’s printed graphisms, which are at the public’s disposal and available in different formats. Visitors are free to combine those pieces of paper and, in some cases, can also take high-quality facsimiles away with them. 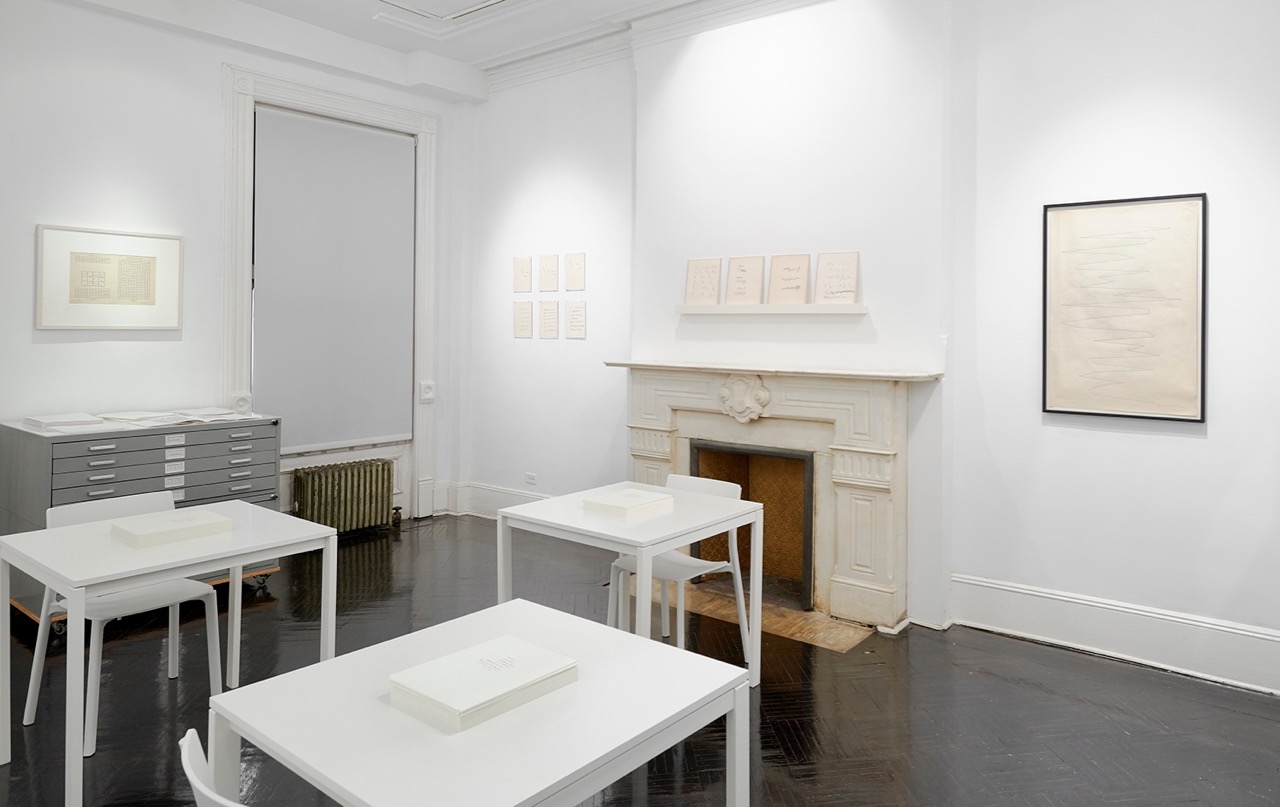 It is understandable that commentaries on Dermisache underscore her project’s inexpressible nature. With each of her works, and simultaneously with all of them together, she demonstrated that all writing possesses a background of unreadability. She salvaged that background and presented it with definitive beauty and coherence. This leaves us speechless and without arguments. But one less frequently mentioned aspect is that her unreadable writing also rises up against what is written as an imposition of discipline by the power and authority of institutions; against what is written as an obvious condition of things. It leads us out of that writing’s readability. Dermisache’s refutation—her silence—remains in force in this writing determined to uphold its rapt condition.

Sergio Chejfec is an Argentine author of novels and essays who lives in New York. Some of his novels have been translated into English and published by Open Letter. He teaches in the creative writing in Spanish program at New York University.