A two-person show looks at Brexit and the migrant’s plight. 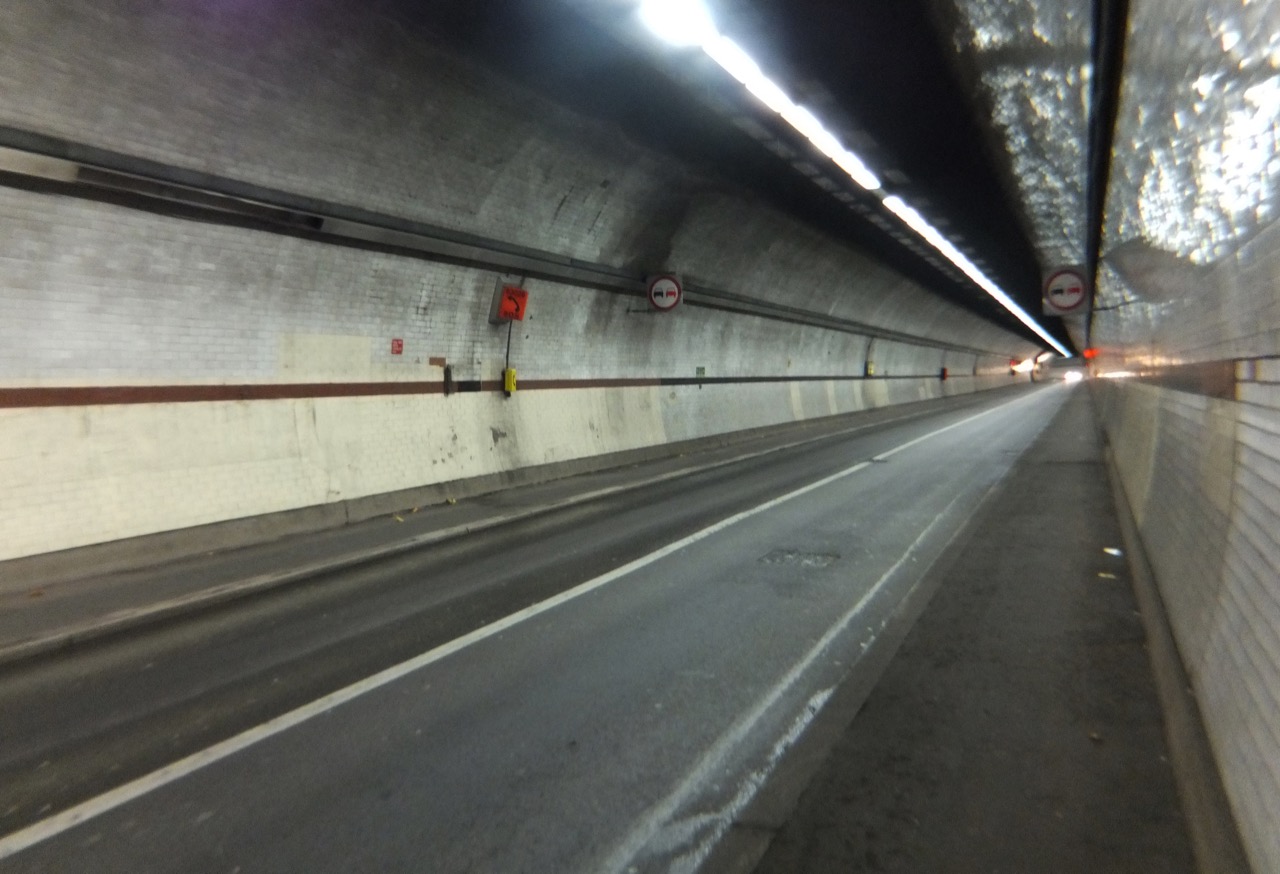 Alia Syed, On a wing and a prayer, 2016. HD video, sound, 18 minutes, 11 seconds. Image courtesy the artist and Talwar Gallery.

Immigrant, exile, refugee, traveler, stranger: these are the figures that define our time. They are alternately the fantasy and the nightmare of globalization—neoliberalism dreams of a “flat earth,” a world system where laboring bodies travel across borders as easily as capital, while populism fears those same bodies as dangerous, even deadly, parasitical drains on local economies and civil society. What these seemingly opposing narratives share is a determination to erase historical and material realities that motivate such mobility: the wars, economic crises, imperialisms and colonialisms, the violences and disparities that make displacement necessary and impossible, full of friction, driven by a basic instinct for survival.

A two-artist show at Talwar Gallery takes on the problem of the peripatetic body in relation to xenophobia, isolationism, and racism in the UK, but from two markedly different vantages. Allan deSouza’s Through the Black Country imagines Brexit via the form of the nineteenth-century traveler’s account, using a series of wall texts, maps, and images, while Alia Syed turns to video to convey the experience of a Sudanese refugee caught in the limbo of statelessness. The show opened on January 13 in New York—after the defeat of Hillary Clinton, which represented, among other things, a serious blow to open borders and free-trade zones like the Trans-Pacific Partnership, but before Trump’s executive order banning travel from certain Muslim-majority countries and his aggressive interpretation of deportation rules, among other anti-immigrant measures. In the aftermath of these events, the show has become pointedly relevant. 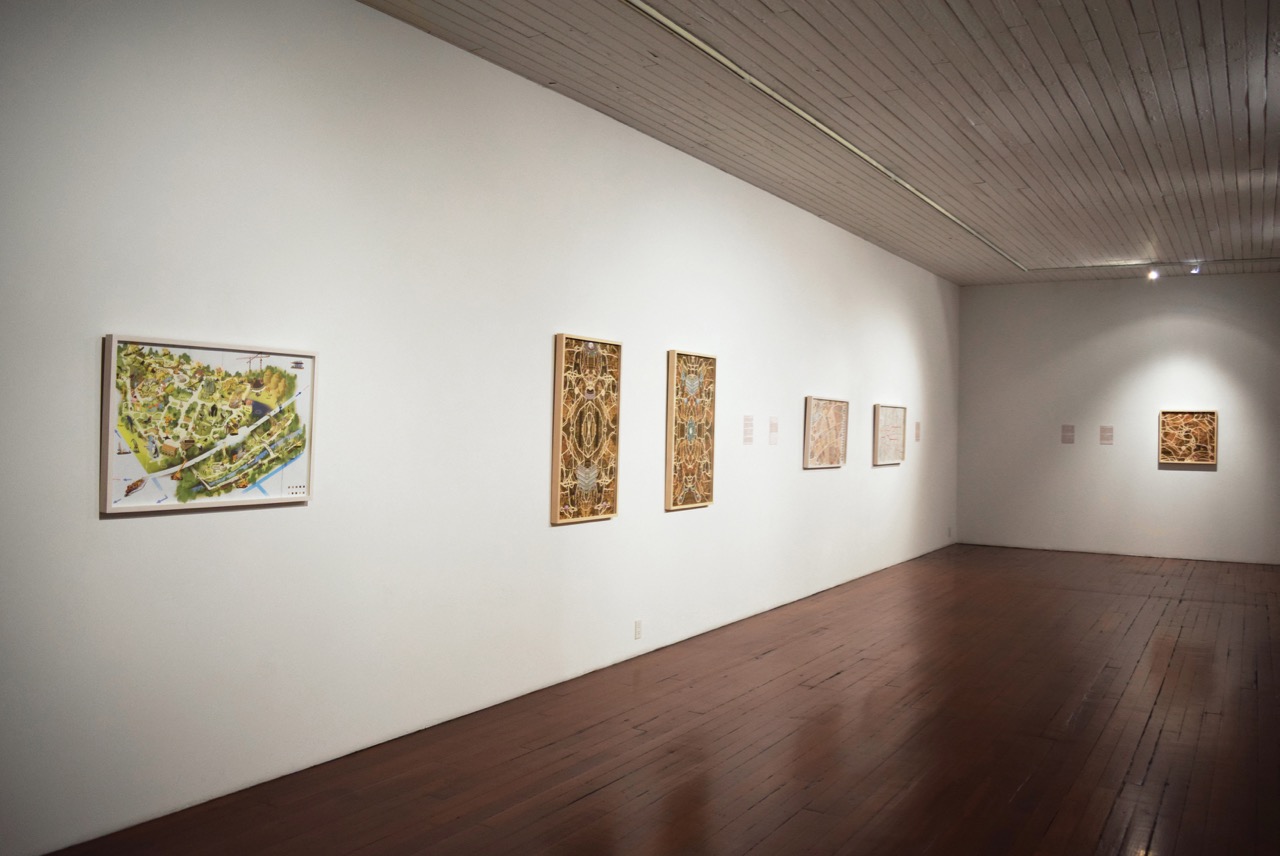 Through the Black Country takes the form of a deconstructed journal of the same name—subtitled The Sources of the Thames Around the Great Shires of Lower England and Down the Severn River to the Atlantic Ocean—by Hafeed Sidi Mubarak Mumbai. The fictional author is the equally fictional great-grandson of the real Sidi Mubarak Bombay (1820–85), who was born in East Africa, taken in slavery to India, and eventually, after being emancipated, returned to his homeland as a guide for British explorers of the continent—he was the person who helped Stanley find Livingstone, among other infamous expeditions. The generational change in the family name—Bombay to Mumbai—is a nice touch: just as “Mumbai” has supplanted the British name for the Indian megalopolis in a nativist move meant to assert a postcolonial shift in power relations, the great-grandson rejects his ancestor’s position as a silent native informant to men who got credit for “discovering” a whole continent, instead taking on the authoritative voice of the ethnographer revealing the strangeness of the former center of the British empire.

The journal pages on display mimic the language and tone of the nineteenth-century genre brilliantly, echoing its mishmash of geographical observation, “scientific” description, haughty condescension, and blithe cruelty. Anthropology, the study of human customs and physiognomies, is laid bare as an ironically dehumanizing process. “The English never appear particularly friendly,” Mumbai writes, “and they seem to have a physical inability to smile, especially in the males. I have not had the opportunity to observe a dissection, so cannot be sure if it is, in fact, a failing of musculature.” True to the conventions of this genre, the Brexit decision—endlessly analyzed by Western pundits as the result of a set of complex political, economic, historical, and social forces—is reduced to a mere function of a primitive mindset: “The English have turned their backs on the modern world and its cosmopolitan exchanges, and have retreated into their tribal ranks. I find this narrow-mindedness unfathomable, but it must be surmised from their low intelligence.” 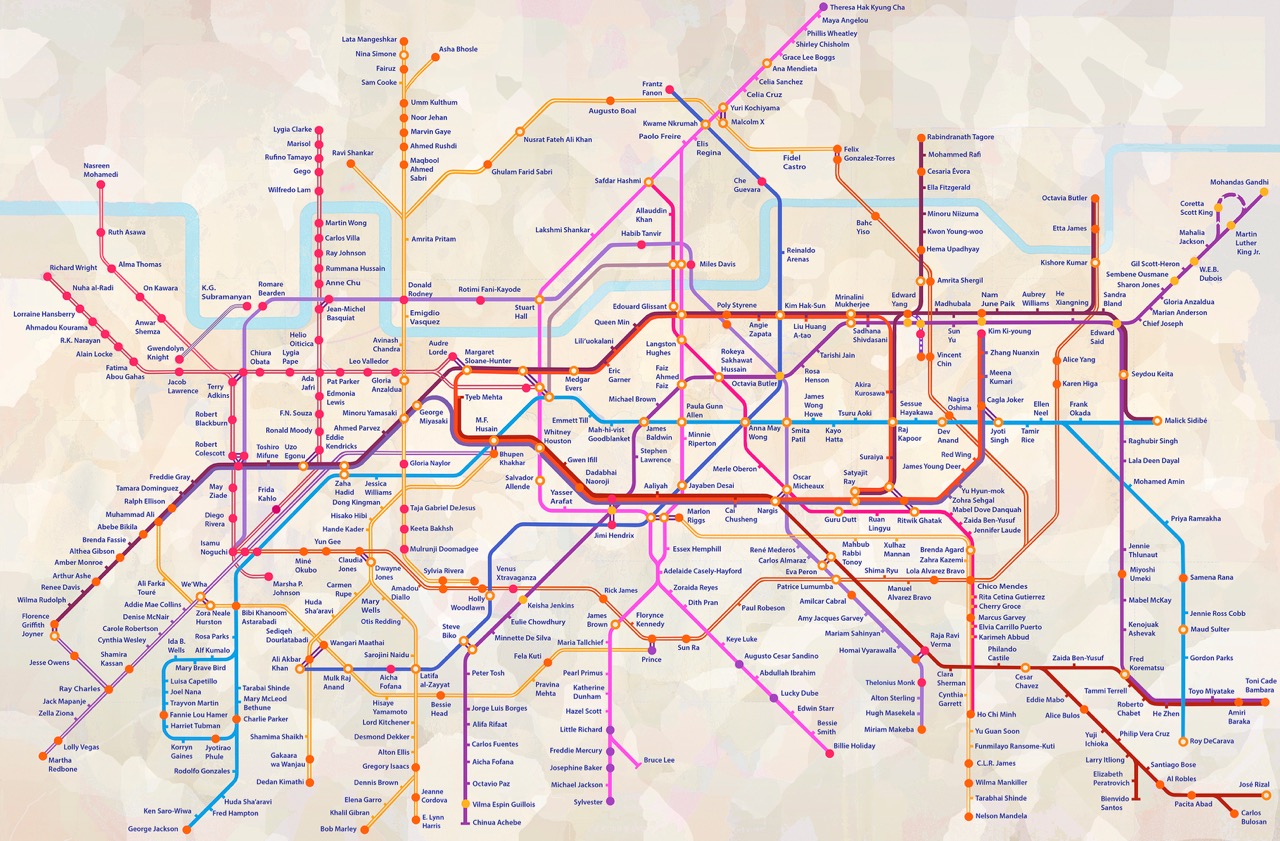 But deSouza’s intervention is not simply one of reversing the colonialist’s gaze, as the accompanying images on view make clear. No travel account would be complete without maps and diagrams, of course, but what is distinctive about these visuals is the way in which London is remade in the image of empire; its history of colonial oppression reshapes—deforms, even—the very fabric of the city that was once the center of global political and economic power. In a plan of the London Zoo (one that is still in use today at the site), animal habitats and tourist facilities are relabeled with the spoils of imperialism, both material—“gold,” “slaves,” “silk,” “tobacco”—and the fantasies of colonial world that resulted—“happy families,” “adventure,” “paradise”: a favorite city attraction is revealed to be a product of British plunder. A classic London Tube map shows stops renamed in honor of postcolonial writers, theorists, musicians, and artists. A pair of images—both titled Mzungu, a Bantu word meaning “white person” and “traveler”—consist of manipulated maps overlaid by images of the crown jewels. Some roads and byways are picked out in a pale yellow that coalesces into abstracted figures. Between that and the placement of the jewels, the city is suddenly transformed into an African body, a subtle haunting of London by its colonial past. 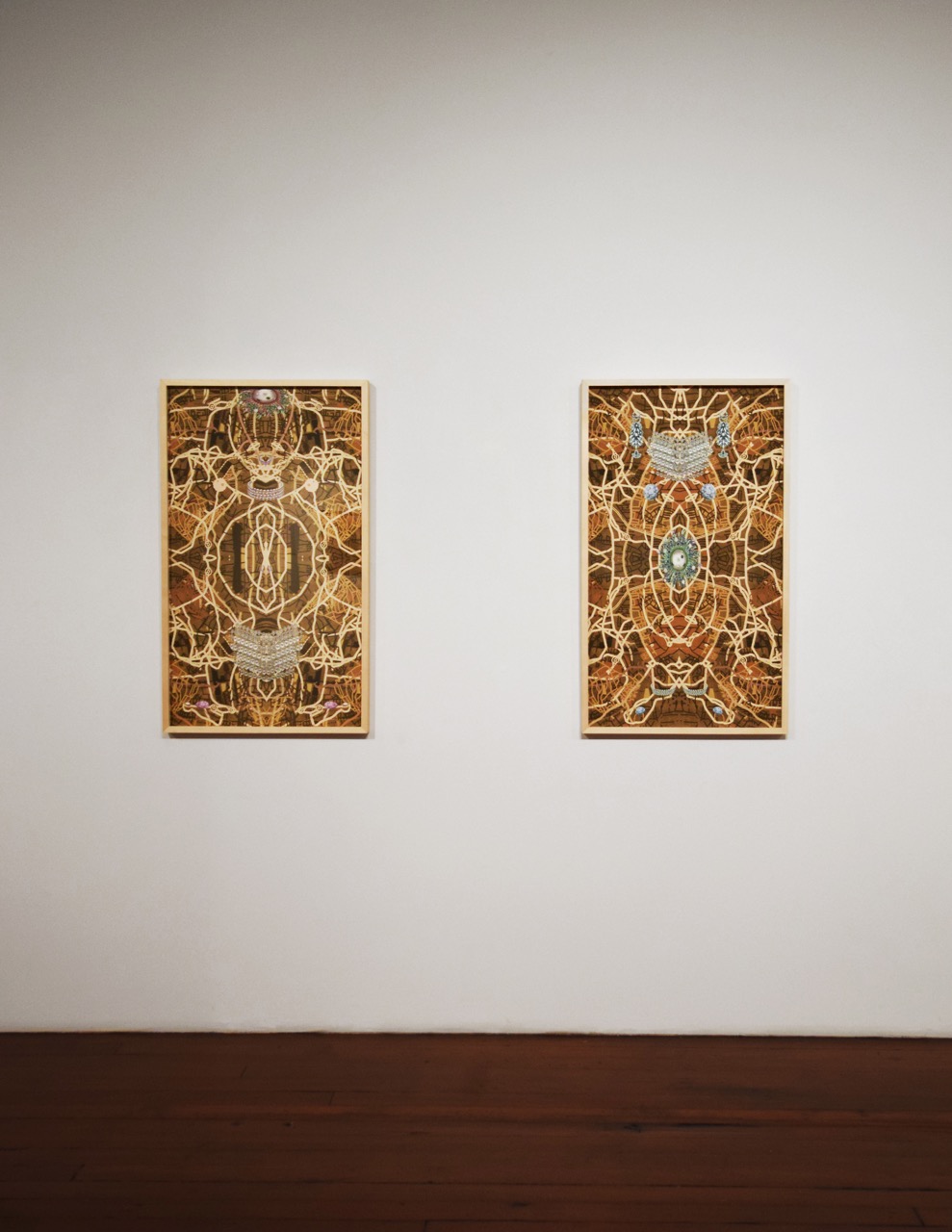 Alia Syed’s film On a wing and a prayer, on the other hand, forecloses both past and future. In 2015 a Sudanese man, Abdul Rahman Haroun, walked the thirty-one-mile length of the Channel Tunnel in a bid to claim refugee status in the UK. Using a handheld camera, Syed reconstructs the event in London’s Rotherhithe Tunnel from a first-person perspective, giving the viewer a visceral feeling of the danger and desperation involved in the act. As cars rush past, the artist switches from a walk to a run or stops entirely and turns toward the concrete wall, perhaps to avoid being seen by surveillance cameras that punctuate the length of the journey. You never see the body holding the camera: the figure of the displaced refugee is itself displaced, invisible, indicated only by the camera’s movement. The film includes a narration—a recitation of David Herd’s essay “The View From Dover,” in which the author discusses the spatial limbo of the refugee’s condition. 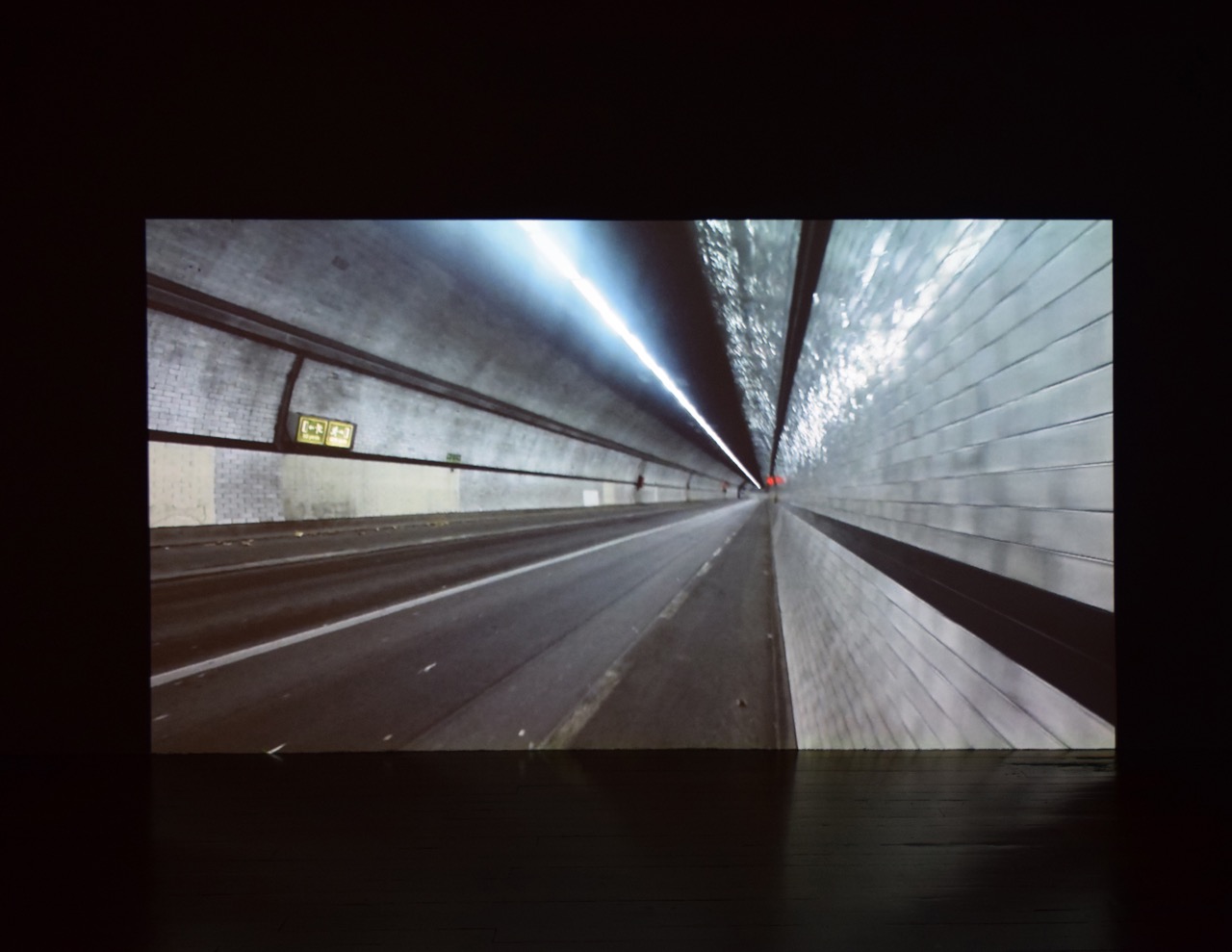 Alia Syed, On a wing and a prayer, 2016. Installation view. Image courtesy the artist and Talwar Gallery.

It’s no accident that the film offers no view of entering the tunnel or leaving it, but rather visualizes a segment of the journey without any resolution. It is the record, that is to say, of both placelessness—of being neither here nor there in both a phenomenological and legal sense—as well as what the theorist Ranajit Guha famously called “the migrant’s time”: being caught between, and cut off from, past (the past of one’s natal place, of one’s history) and future (the future of one’s destination, of possibility). In that respect, both Syed’s refugee and deSouza’s ethnographer are time travelers—they cross not just borders but histories.