Wellness and Cheetos skin care: a show takes on the aspirational lifestyle. 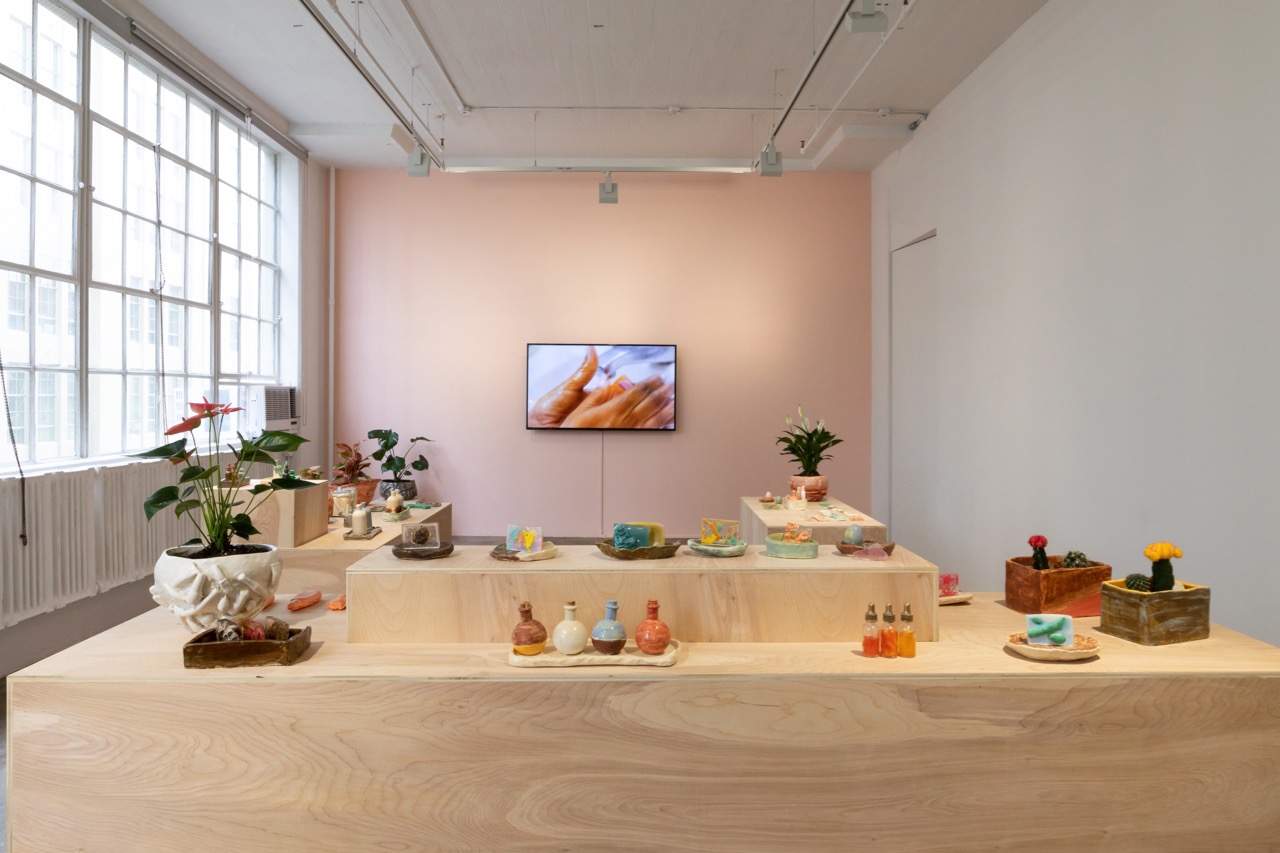 Ilana Harris-Babou drew public attention and critical praise in the most recent Whitney Biennial for works like Reparation Hardware (2018). In it, she took on the role of the creative director in a brand-lifestyle video, discussing the ways in which she sought to devise a stylish aesthetic that honored the history of slavery—“Their liberation was handcrafted,” she deadpanned. Such spot-on political satire played the fantasies offered by high-end home-furnishing companies against the reality of the injustices that have long produced those fantasies, including the occlusion of labor, the fetishization of troublesome histories, and the appropriation of marginalized cultures. Now, in her first solo outing at the Hesse Flatow gallery, Harris-Babou continues her fascination with aspirational lifestyles, turning her focus to self-help and wellness—overlapping discourses that seem to have found their apotheosis in Gwyneth Paltrow’s Goop brand and Marianne Williamson’s recent run for the Democratic nomination. 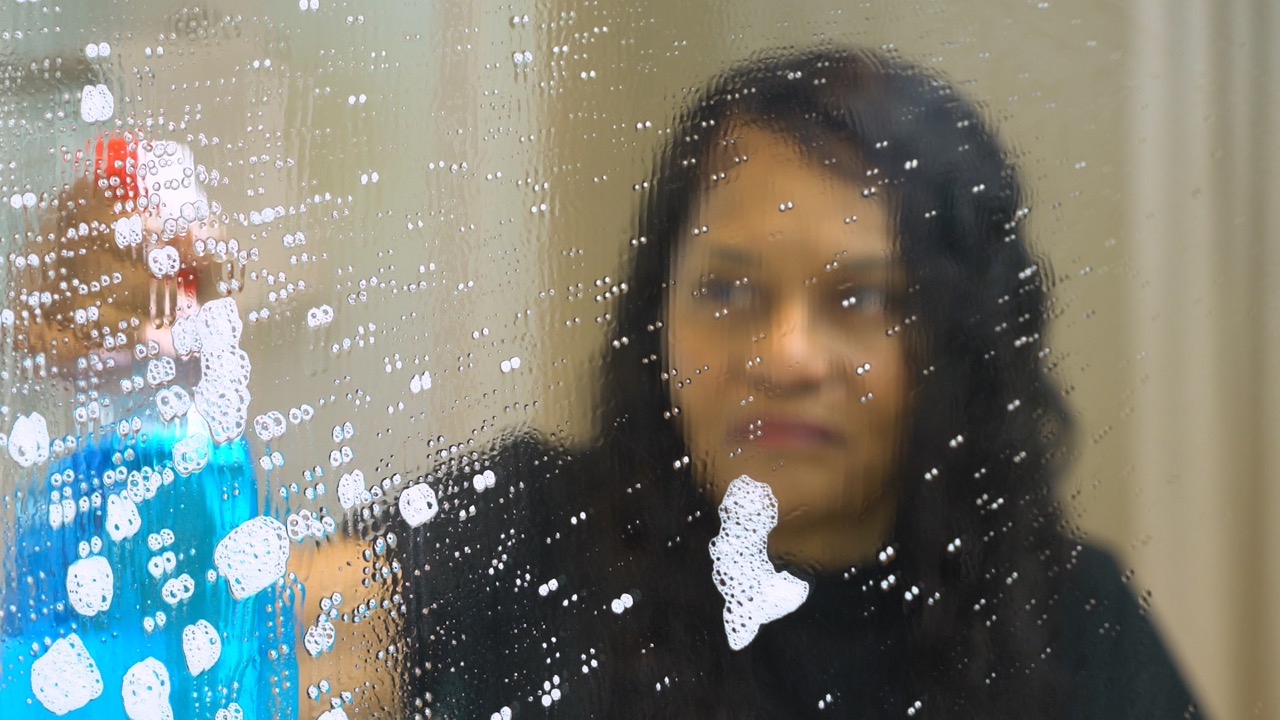 The centerpiece of the exhibition is Decision Fatigue (2020). The video appears on a monitor hung on the rear wall of the first gallery, which is painted a tasteful pinky-beige. It features Harris-Babou’s mother, Sheila Harris—an elegant woman of a certain age, and a familiar presence in the artist’s work, having previously appeared in a number of her videos and performances—explaining her beauty routine, talking about her favorite skin-care products, and giving tips on spiritual and physical health. The genre is not uncommon to anyone who’s looked at woman-focused websites lately, but within seconds it’s clear what we have here is not business as usual. After cleaning off her bathroom mirror with Windex—the first step in her toilette, Harris-Babou’s mother explains—she goes through two different self-care regimens. The first involves her preparations “for not breastfeeding,” and the second, a grooming suitable “for eating a TV dinner.” Both activities are markedly out of step with Yummy Mummy dogma where lactation and “clean eating” are two of the many, many pillars of civilized, bourgeois, and largely white femininity. 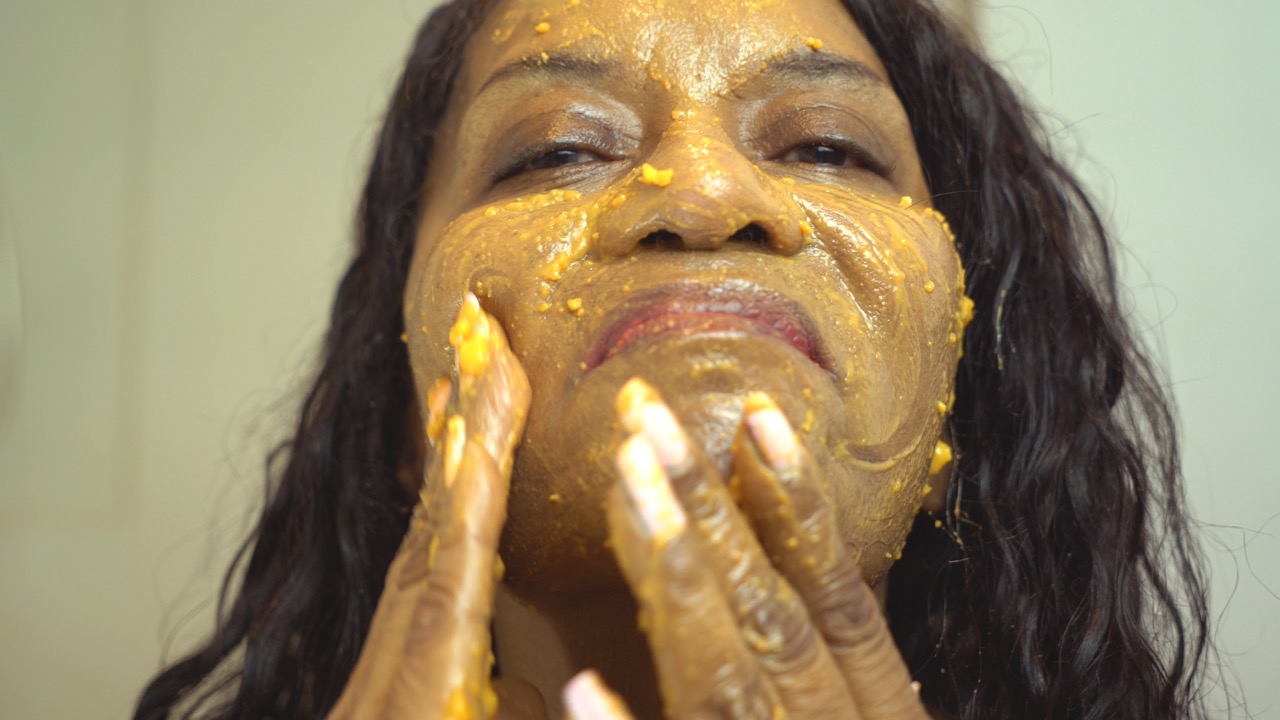 She uses soaps made from chocolate chips—“It actually came from the Amazon, the forest of the Amazon, and it’s very, very pure and natural”—and a face mask made of crushed-up Cheetos. She massages her skin with a rose-quartz roller—a particular fad right now for relaxing your facial muscles—and applies moisturizer. She recommends taking an ashwagandha multivitamin washed down with a Pepsi. (Ashwagandha is an Ayurvedic herbal medicine, the next in a long line of trendy naturopathic magic bullets, after acai berries, quinoa, chia seeds, and turmeric; despite the almost miraculous curative powers attributed to this exotic ingredient, she credits Pepsi’s effervescence as the key to health.) 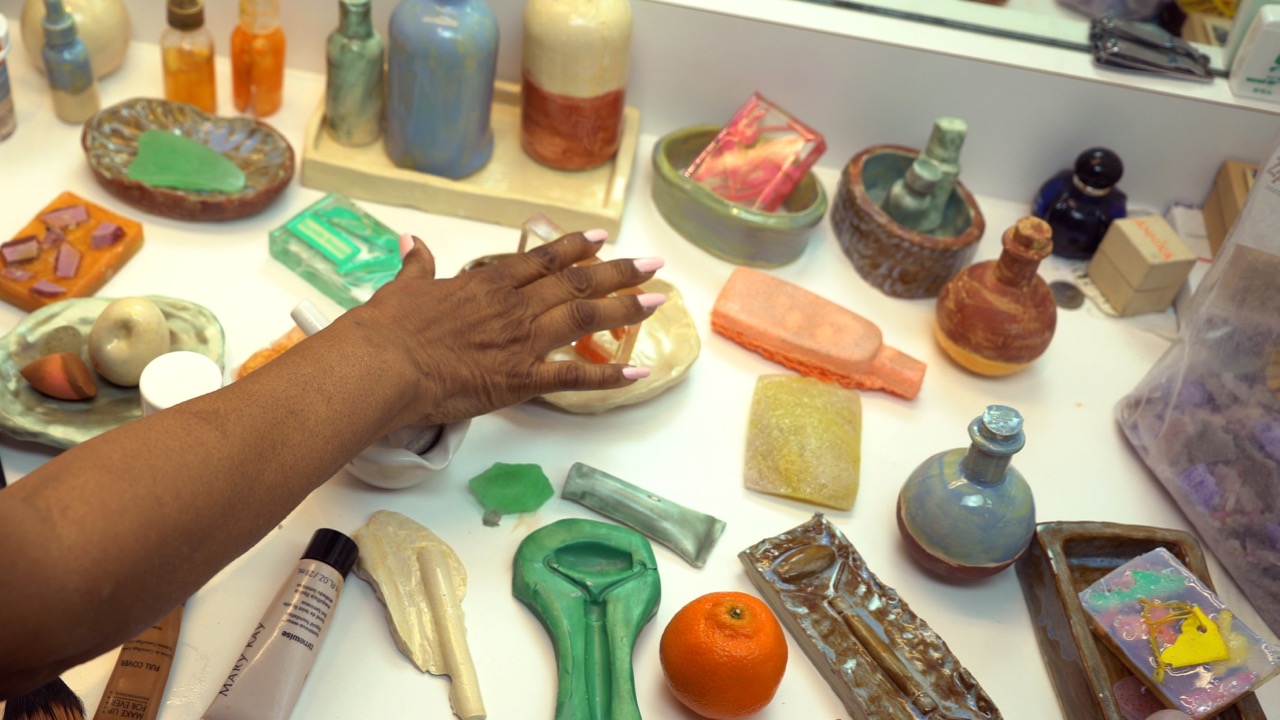 Ms. Harris’s well-manicured fingers range over her bathroom countertop, strewn with all manner of what are clearly handmade beauty tools, devices, vials, and potions; those same objects are on display in the gallery, arranged artfully on stylish wooden plinths, juxtaposed with flowers and plants as in a luxe boutique. (A second room includes an array of soaps lined up on a wall shelf and several collages derived from the pages of wellness magazines.) Made of ceramic and resin, sometimes glazed sloppily and often embedded with found objects and other materials (car air fresheners, neon-orange corn puffs, flowers, sand, grout), these self-care products are utterly useless: the soaps do not lather; the Cheetos face serums—even if you ever wanted to put them on your skin—are cast, solid forms, fused with their vials; the face rollers do not roll; the sponges are not spongy. Many of the tools are present only as absences—we are served up their molds instead of the objects themselves. The sleek, clean, inviting aesthetic of display stands in stark contrast to the abjectness of its offerings. 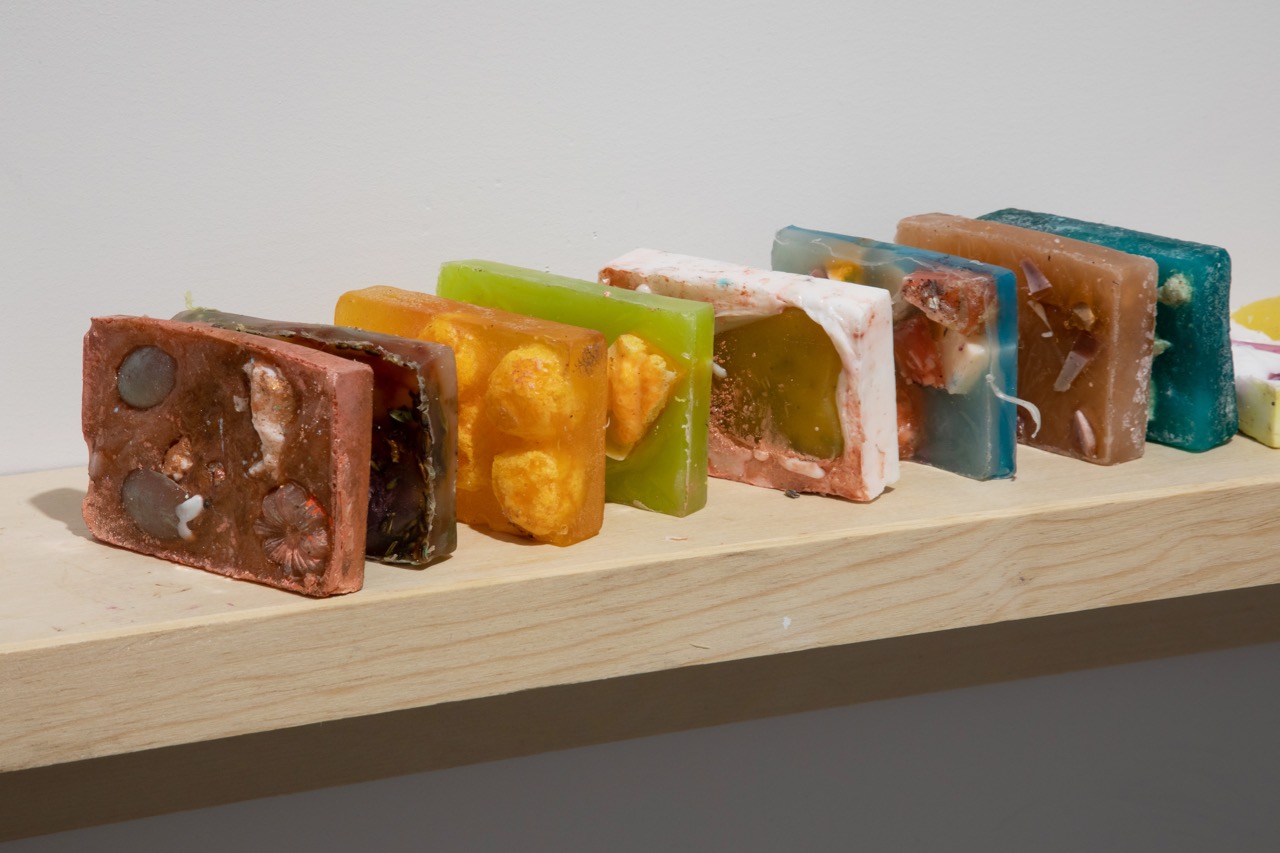 If our beauty consultant’s massaging and moisturizing seems a little rough, so is her description of breastfeeding: “When you breastfeed, your lifeforce is drained . . . It’s metaphysical, in fact. . . . I’ve been told that it doesn’t cause that much of a physical reaction on your part in terms of pain, but my personal experiences have been to the contrary.” She goes on to describe those experiences in grim detail. Likewise, her characterization of an evening spent alone, primped and preened, in front of the television hints at exhaustion and the relief of being able to eat something at the end of the day “that you haven’t worked at preparing.”

In these moments, one gets a sense of the disconnect between the lifestyles being sold to us by Gwyneth and her well-heeled friends, and the realities of our (classed and raced) lives, where long hours at underpaid jobs with no opportunities for maternity or sick leave, and a health care system that treats the health of some people as less important than that of others, means that achieving an uncluttered, serene, and beautiful state of well-being is near impossible. (It is not insignificant that Harris-Babou’s grandmother worked as a live-in housekeeper for a rich white family in Connecticut, and her mother was raised in that house; Harris-Babou cites this experience, along with a recent summer residency in the Hamptons—Ground Zero of the yoga-and-a-smoothie-followed-by-a-hot-stone-massage culture—as formative for the show.) 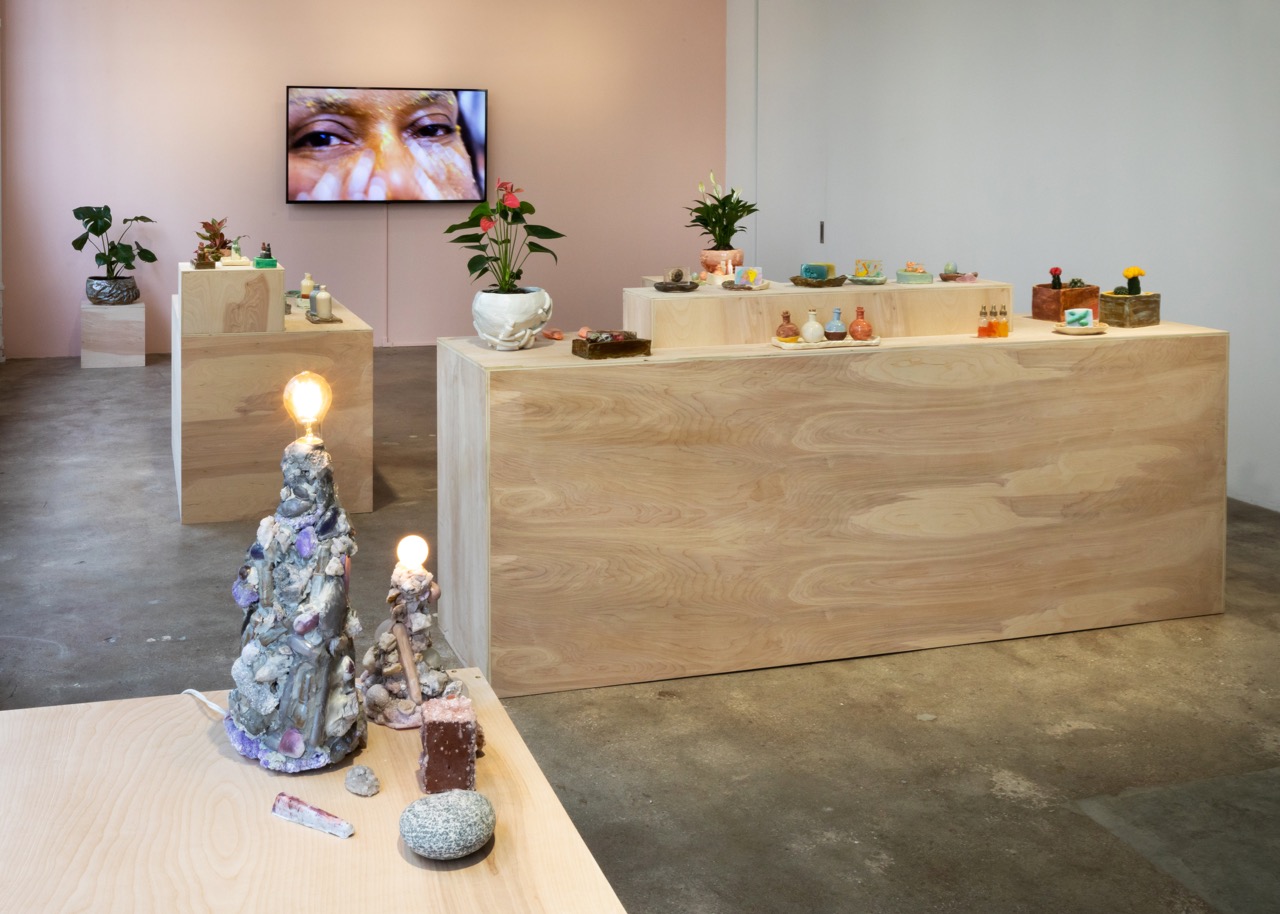 But even if one has the means, the time, and the right amount of melanin (which is to say very little), Harris-Babou suggests, the aspirational lifestyle papers over something troubling. By titling her work Decision Fatigue, she bids us to reflect on our wearied propensity to let others dictate the terms of our health and happiness—especially given that the pathways to such well-being are often so onerous as to produce even more fatigue than we started with. Why do we let ourselves buy into these notions, what deep-rooted needs do they address, what damage do they cause, even in their attempts to heal? In a recent interview with Emily Gallagher in Document Journal, the artist speaks of the workouts designed to provoke “emotional catharsis,” the detoxifying diets, and flower-arranging classes that aim to reconnect women with their natural surroundings—all of which she experienced during her Amagansett residency. She observes a deep anxiety at the core: “There was this sincere need to let go in this perfectist [sic] femme space. Like a valve that needed to be opened.” We’re all barely holding it together, even if we look damned good doing it.