The downward gaze: a painter maps the ground beneath her feet.

The word landscape denotes many things at once: the natural, geographical, and geological features of a space (the earth, the mountains, the rivers and lakes), the fashioning of that space into a physical and conceptual place (the whittling away of forests, the creation of gardens and farmland, the imposition of borders and boundaries), and the representation of that place in artistic form. Josephine Halvorson’s work—paintings made out in the open air, each during the course of a single day—has long played with these multiple definitions. 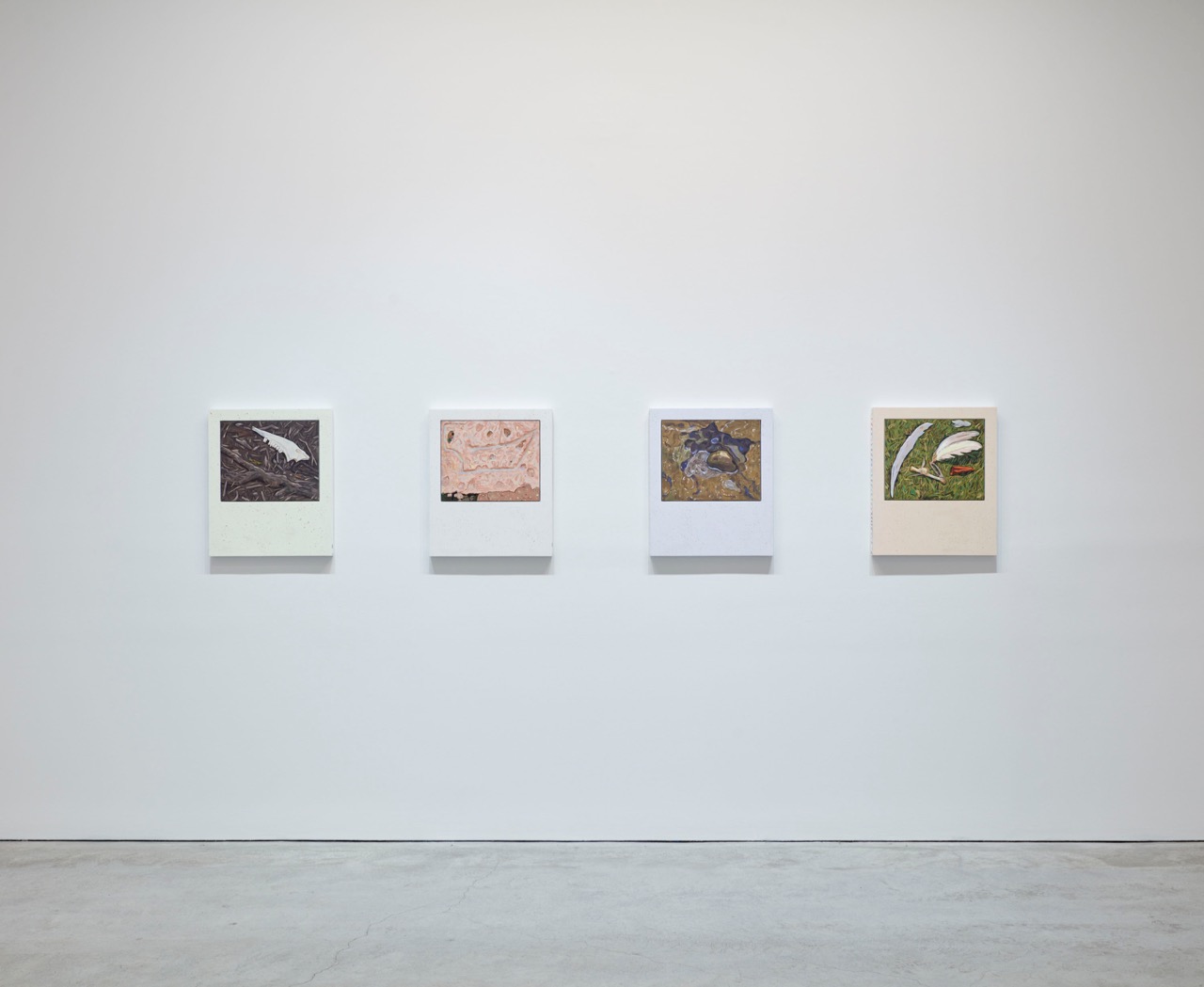 Her current show at Sikkema Jenkins & Co. consists of eleven works installed in the two back rooms of the gallery, all from 2019. Each comprises two distinct components: a panel depicting a patch of ground seen from above and rendered in gouache with quick, calligraphic strokes, tightly fitted into a larger frame; and then that frame itself, which is covered with a whitish, flecked base composed of ground-up earth, rocks, and detritus gathered from the site represented in the central panel. (The works in this show were made in Western Massachusetts, where the artist lives, and in the Mojave Desert and Matanzas, Cuba.) The picture of the landscape is embedded in the actual landscape, in other words; the image of the ground is forced into proximity with the actual ground. 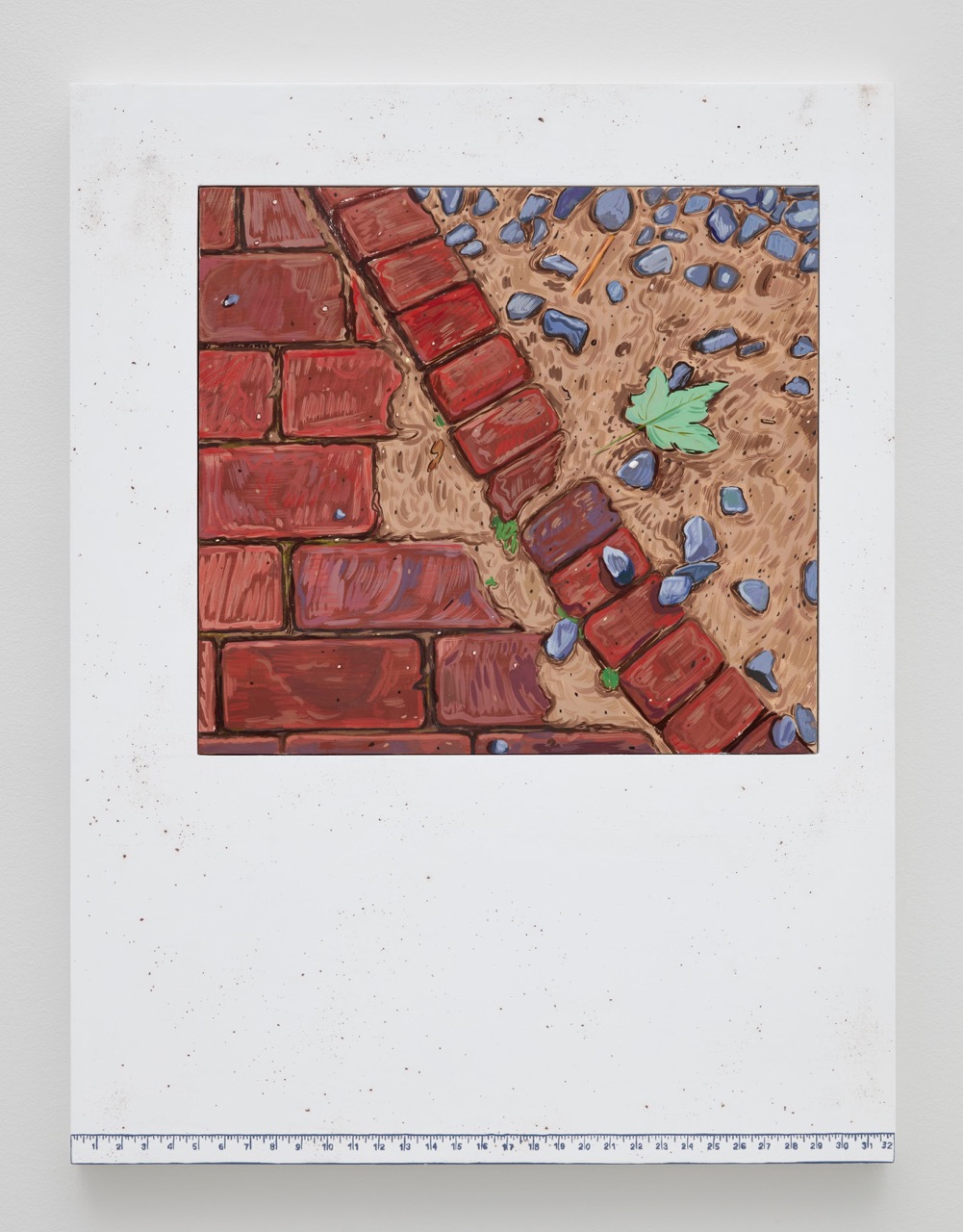 Halvorson is apt to talk about her work not only as painting, but also as a form of land art—related to things like Robert Smithson’s late-1960s “non-sites,” in which he charted the ex-urban industrial waste lands of New Jersey by displacing the stones and dirt he found there into art galleries. In the directness of her process of meticulously transcribing what she sees in front of her—an immediacy heightened by her recent switch from oil pigment to fast-drying gouache, and her use of a sanded-down, papery surface that gives her paintings the air of a sketch—she also refers to its relation to landscape photography. Indeed, mapping and recording are continually evoked in these panels. Ground Register: Bricks/Ruler offers up the image of a crumbling edge of a brick patio, the dirt and rocks beyond its border now encroaching on it. The painting’s muted palette is punctuated by the bright green of a maple leaf and bits of moss or weeds or debris here and there. Her brushwork is energetic and graphic, almost cartoonish, as she limns in great detail her otherwise humble and inert subject matter. At the bottom of the outer frame, Halvorson has carefully painted a measuring gauge—thirty-two inches are marked out, the width of the canvas, divided into halves and quarters and eighths. The image of the ground, you realize, is done at more or less a 1:1 scale—a playful nod to Jorge Luis Borges’s micro-story “On Exactitude in Science,” a fictional account of a realm in which cartographers made maps the size of the exact territory they described, maps so uselessly large that they eventually were left to tatter and decompose and get churned back into the landscape itself. 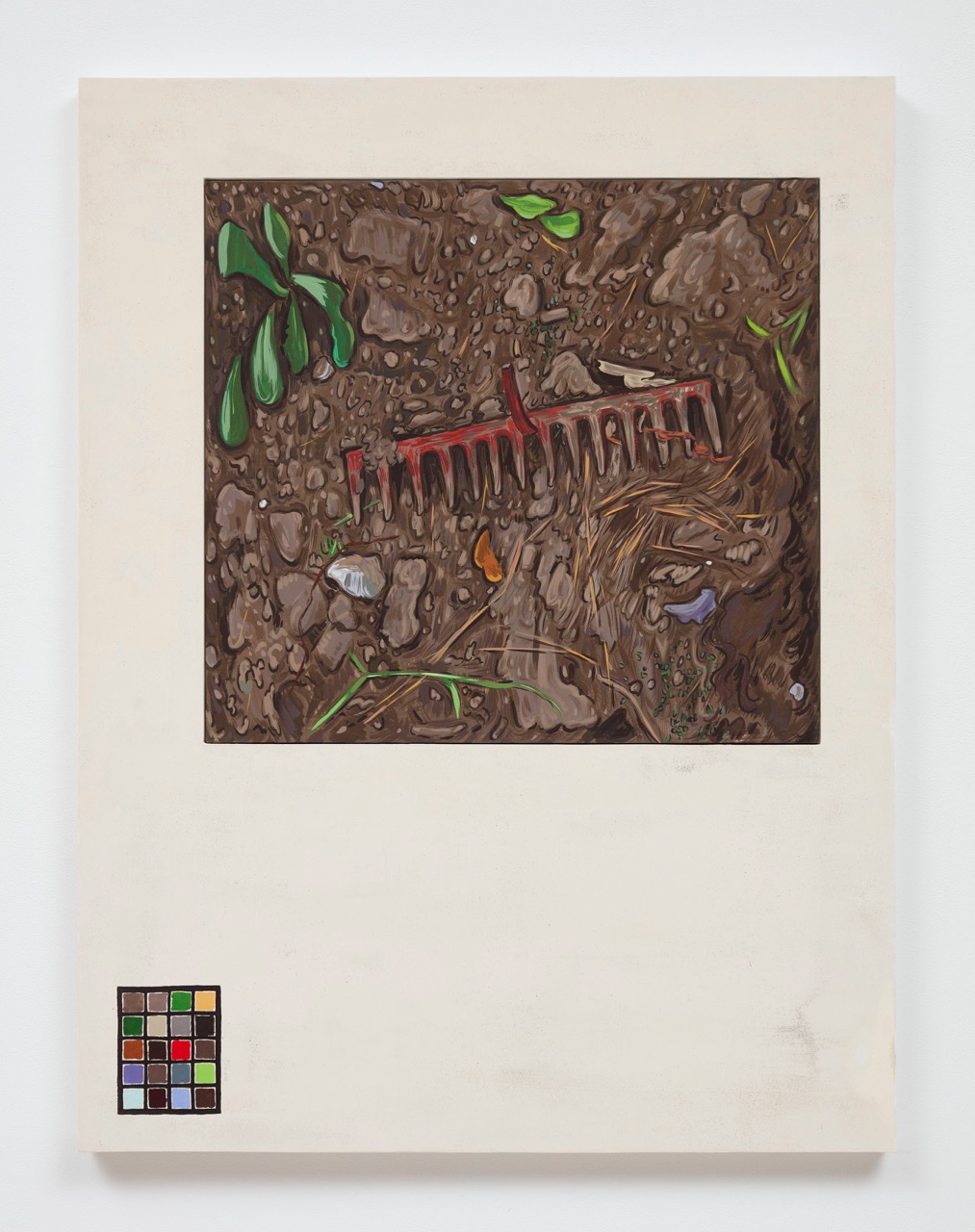 Ground Register: Rake/Chart supplies a different kind of legend, this one in the lower left corner of the outer frame—a color chart that indexes the pigments used to create the image of a weedy segment of rocky, clayey soil at the center of which lies a broken-off head of a rake. It is a bit of a revelation to search out the cornflower blues and indigoes and yellows from the chart in a painting that, at first glance, seems more or less monochromatic; in our search, we are made aware of how the ground being depicted and the ground (i.e., surface) of the painting are roughly identical—after all, even pigment itself is largely concocted of minerals and rocks and clay. A series of four panels, all titled Matanzas, presents scraps of land in Cuba; they include ticked-off measurements and a color scale on the left-hand edge of the frame, and on the right-hand edge, a date stamp and a fingerprint. The date stamp, along with the artist’s painting-a-day method, invokes the element of time, while the fingerprint alludes to the way these works are contingent on a body—the painter’s body—existing in space. Ground Register: Coals/Coins introduces yet another form of measurement: hand-painted nickels and quarters that seem to spill across the outer frame, perhaps appropriate for an image of a product of the earth that, as fuel, has been monetized over centuries.

Other than the four Matanzas panels, none of the paintings explicitly name their locations. Nor, despite the fact that they were all created in beautiful parts of the world, do they trade on the picturesque qualities of their sites. Most of them have a square or vertical orientation, not a traditional, horizontal landscape format. We see no horizon, no expansive space, not even a sliver of sky—only a shallow, almost bas-relief patch of ground. They defy the conventions of their genre at every turn, that is to say. In the two panoramas on view—Ground Panorama, Boundary Marker and Ground Panorama, Gravel Track, each 132 inches wide—Halvorson sticks with her downward gaze, offering a topography instead of a vista. The result is something that verges on allover painting; we walk along their lengths, studying the incidents and variations of the surfaces the way we might if we were hiking through the areas they depict. (The linear effect, though, is a red herring: Halvorson made both works by turning her easel around a single point on the ground and rendering the views in succession.) The forest floor in Ground Panorama, Boundary Marker, covered with fallen leaves and sprouting with green fern fronds, pine saplings, and trillium, is interspersed at rhythmic intervals by five yellow spikes tied with bits of fluorescent pink tape. There is a subtle echo here of Jackson Pollock’s Blue Poles (1952), another panorama that is all surface, no view. But there are other forms of abstractions at stake, not just Pollock’s pictorial variety—namely, the way those stakes indicate a property line, a superimposition onto the natural world concepts of ownership. Halvorson’s painting practice is likewise all about boundaries, physical and artistic—the length of a day, the limits imposed by the climate, the time it takes gouache to dry on a surface, the markers that indicate access, or restrict it.