Hip-Hop
Bring That Beat Back

Nate Patrin charts the history of sampling in hip-hop. 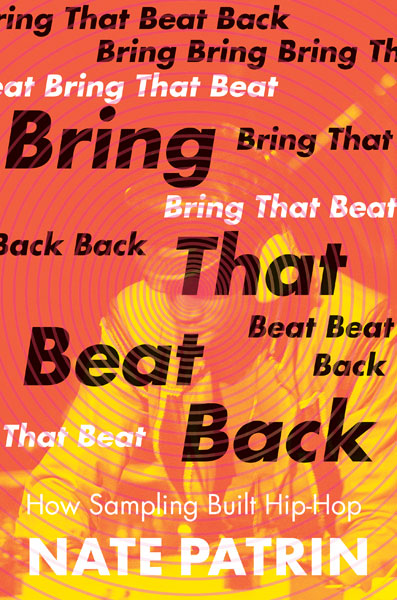 Bring That Beat Back: How Sampling Built Hip-Hop, by Nate Patrin, University of Minnesota Press, 347 pages, $22.95

Several strategies have been used to analyze the immensely rich and complicated history of sampling in twentieth-century music. All of these approaches are incomplete. Some have focused on the technology—from the early days of analog tape edits and turntables to the digital sampling revolution of the early 1980s to hyper-fast computers. But concentrating on the devices, with the attendant lure of fetishizing certain vintage makes and model numbers, can obscure the vital creative contributions of the musicians who innovated with these machines. Other writers have examined the legal aspects of sampling: the drama of unending lawsuits, the challenges of clearing samples, the play-by-play of landmark cases in music and copyright. This take can hide the music in a thick, impenetrable layer of money matters, business dealings, and legalese. Still others look at sampling in the avant-garde: the technique of musique concrète, devised in 1948; collage, the work of John Cage and other experimental composers; cut-ups. This approach is limited, too, in part because it tends to center on a Western, mostly white chronicle of events.

The history of sampling in hip-hop could easily span several long tomes. In the new book Bring That Beat Back, the longtime music critic and hip-hop scribe Nate Patrin uses four figures to focus his narrative: Grandmaster Flash, Prince Paul, Dr. Dre, and Madlib. Other characters slip in and out of the mix, including DJ Kool Herc, Marley Marl, Tupac, RZA, and J Dilla. There aren’t many women in this male-dominated storyline, but a few female artists, like Roxanne Shanté and Missy Elliott, get a brief discussion. If there’s a sequel, the next book should investigate the impact of women more fully.

Patrin begins his story with a quick nod to experimental music—Steve Reich’s prescient 1966 tape-loop piece “Come Out”—which gives way to a condensed history of deejaying, via soul and disco. “Before everything else—the sampler, the remix, the entire concept of hip-hop—there was the DJ,” he writes. This leads into Grandmaster Flash, whose mark on the emerging genre of hip-hop was indelible—even if he didn’t achieve stratospheric financial success. “ ‘The Adventures of Grandmaster Flash on the Wheels of Steel’ was definitive as a document of early DJing, a revolutionary piece of music for those in the know,” Patrin asserts. “What it wasn’t was a hit.” Flash’s story as a hip-hop pioneer in the 1970s and 1980s advances, in a rough chronology, to Prince Paul, the producer most famous for his work with De La Soul in the late 1980s and early 1990s, to Dr. Dre’s almost simultaneous efforts with N.W.A during the 1980s and as a blockbuster solo artist and producer in the 1990s, to Madlib, best known for his more “underground” productions with artists like MF Doom and the late J Dilla in the 2000s.

Patrin is adept at pulling source material from the dusty archives of bygone music journalism, revealing how hip-hop was received in parts of the popular press. He delves into Lester Bangs’s misguided dismissal of hip-hop, quoting his forlorn proclamation in the 1981 Village Voice Pazz & Jop Critics Poll: “Rap is nothing, or not enough.” Patrin also teases out the rock-centric takes of other critics later on in the 1980s. “In March of ’89,” Patrin writes, “Robert Christgau called De La Soul ‘new wave to Public Enemy’s punk’ and referred to their style as ‘kiddie consciousness, junk-culture arcana, and suburban in-jokes’ . . . softened by the A-minus-earning upside that ‘you can dance to them.’ ” Even the record labels got in on the act, seizing on the rock references and poking fun at them. As Patrin recounts, Tommy Boy advertised De La Soul’s 3 Feet High and Rising “with an ad featuring a white suit-and-tie yuppie holding a copy of the album with the caption ‘I came in for U2, I came out with De La Soul,’ adding a paraphrased pull quote from Robert Hilburn at the Los Angeles Times calling it ‘the Sgt. Pepper’s of the Eighties’—high praise, albeit on rock’s terms.”

Patrin isn’t afraid to be critical. He describes Jean-Michel Basquiat’s musical explorations in the early 1980s as “wildly eccentric,” recounting that the famous early track “Beat Bop,” which was produced by Basquiat—who also created the iconic album cover—was supposed to include Basquiat’s verses, but fellow artist Rammellzee found them “laughably corny and subbed in a sixteen-year-old kid who went by the name K-Rob to complete the track instead.” On the topic of De La Soul, Patrin—an avowed fan—describes their 1996 album Stakes Is High as “borderline burned out.” He also inserts a few jabs into his praise of Dr. Dre’s The Chronic (1992)—now widely considered a stone-cold classic—writing that it is “a triumph, earned arrogance and untethered creativity pushed through a state-of-the-art SSL mixing console until the music itself sounded chrome-plated.”

In Bring That Beat Back, Patrin is interested mainly in the sonic and cultural aspects of sampling. Sampling lawsuits and other issues get mentioned, but they never take center stage. He exults in the way things sound: about N.W.A’s Straight Outta Compton (1988), he writes, “The first three cuts on Compton were electrifying, a drastic shift from the 808/ARP-sample sparseness . . . a need to bring something even heavier to accompany the group’s more relentless lyrical assault. The opening title track built its drums off a slowed-down loop from the Winstons’ ‘Amen, Brother’ back when only a handful of producers had capitalized off its dense, on-point, funky-to-death drum break . . . Not content to just loop it, Dre and Yella punched in heavier bass kicks and between-verse barrages of scratch-collage hooks to ramp up its impact.”

Patrin has an encyclopedic knowledge of his subject, packing each chapter with manic attention to detail. Sometimes the particulars can be overwhelming, every sentence a barrage of facts and analysis, peppered with the occasional joke or goofy aside. But even the most zealous fan of the genre can learn something new from this book (though the average reader may need to take a few breaks along the way). The glory days of sampling may be behind us, but the music has lasting power. Each track, as Patrin demonstrates, maps out a labyrinth of endless pathways to explore.