In New Orleans, a global triennial fails to learn from its past mistakes. 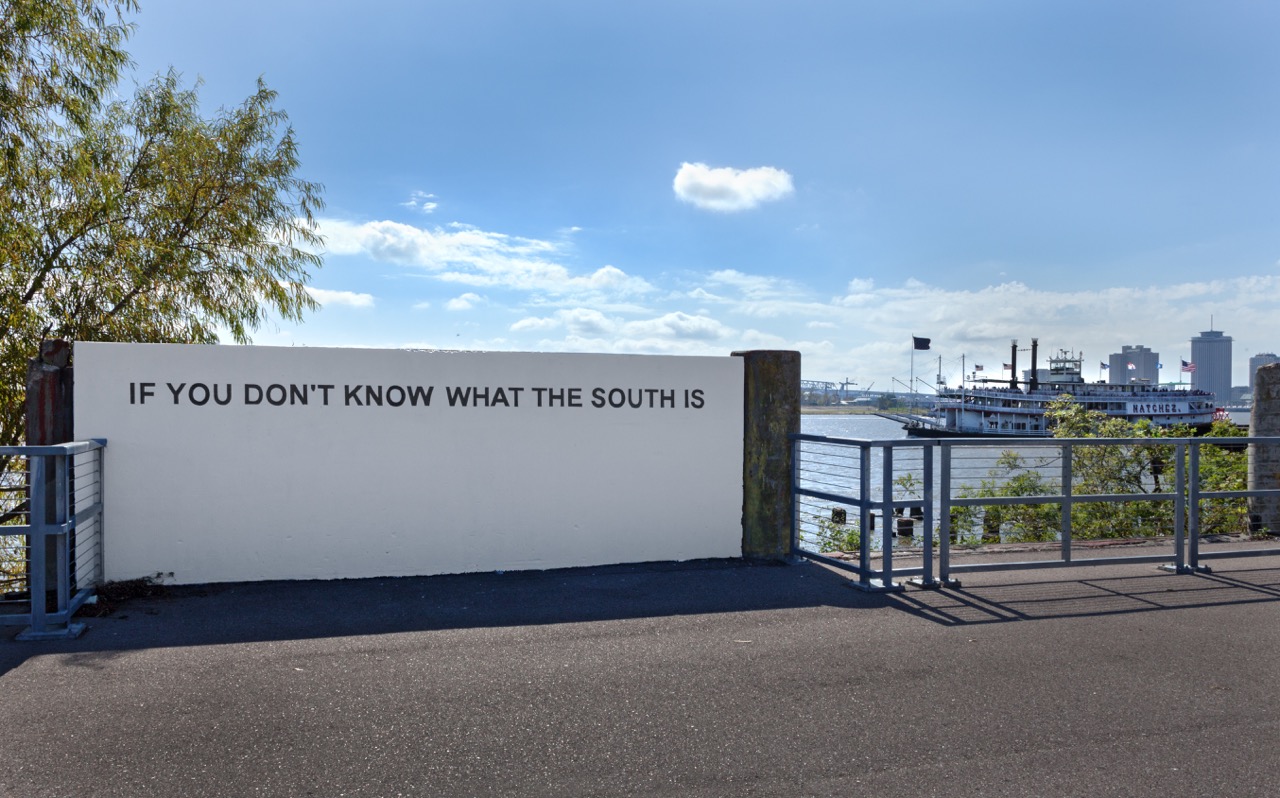 Runo Lagomarsino, If You Don't Know What the South Is, It’s Simply Because You Are from the North, 2017. Installation view at Crescent Park. © Mike Smith.

Prospect.4: The Lotus in Spite of the Swamp, various locations, New Orleans, Louisiana, through February 25, 2018

Ten years after the inaugural Prospect show of 2008, what can the exhibition that christened itself the United States’ only international biennial offer now? Well, don’t come to the current Prospect, now a triennial, looking for continuity, development, or lessons learned from past mistakes. Having attended every one of the Prospect exhibitions—even fractional ones like 2010’s Prospect.1.5—and written about most of the five shows, I can say that the institutional memory of the whole apparatus is well-nigh nonexistent. Which means I’m going to repeat myself when I say that a show that isn’t tied to a physical institution, and that appoints curators who hold full-time positions elsewhere, is not going to feel committed in terms of place, nor will its organization have the infrastructure or leverage to get things done in clear or efficient ways at the local level.

Prospect can feel like a destination wedding missing that clutch behind-the-scenes player, the wedding planner. It’s one thing if your caterers screw you over because they know you’re an out-of-towner. It’s quite another when year after year installing essential signage is overlooked, causing off-site artworks to remain physically ignored or contextually marooned. Or when the failure to liaise exhibiting artists and the local museums and art spaces that constitute the show’s venues has Prospect’s own curators routinely professing curiosity about the final appearance of installed works. One consistent problem is that without invested and knowledgeable education and outreach programs designed to serve the public (remember them?), hired marketing firms take over and the whole thing becomes a kind of desperate gamble for media attention, like trying to get from zero to sixty in the course of one VIP preview. Look at me! pleads Prospect. Please take a little glance, dear culture industry, dear wmagazine.com, before I sink back into obscurity for another few years. 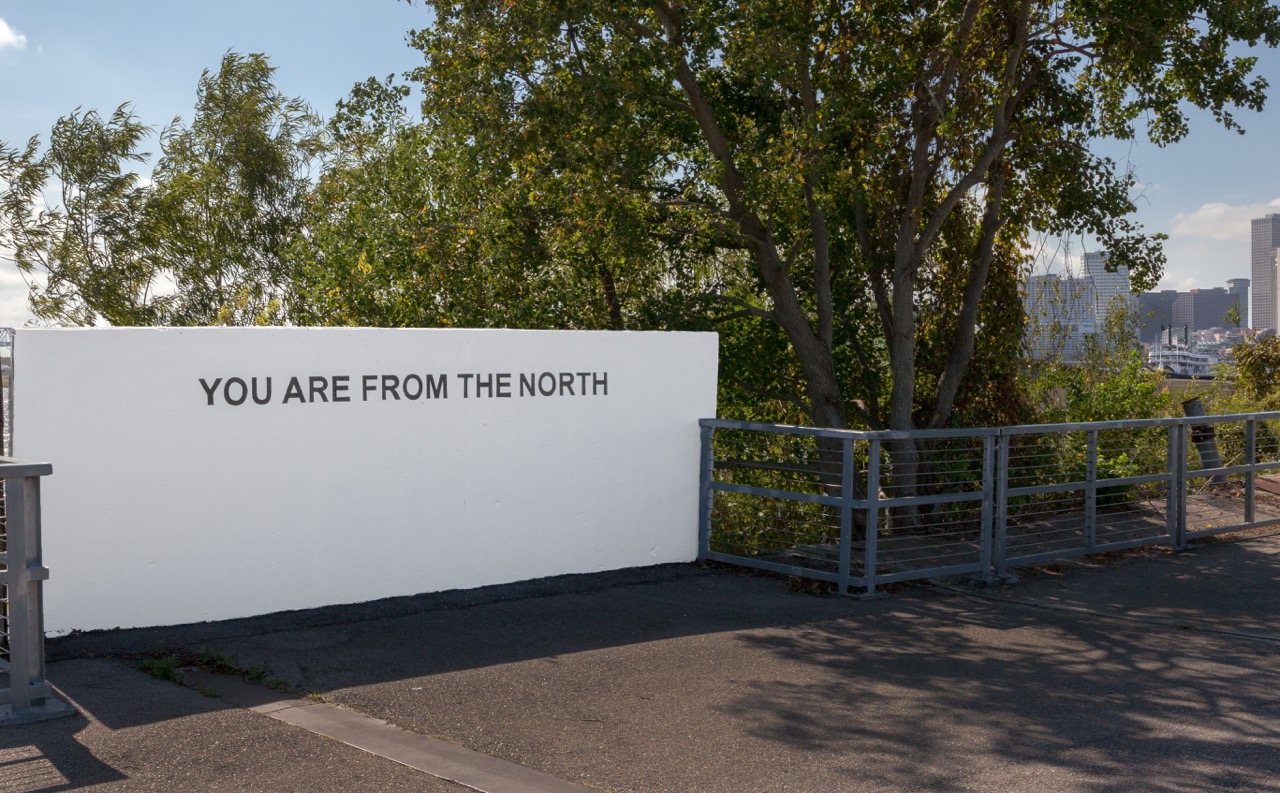 Runo Lagomarsino, If You Don't Know What the South Is, It’s Simply Because You Are from the North, 2017. Installation view at Crescent Park. © Mike Smith.

At Prospect, the head doesn’t know what the limbs are doing, which is particularly unfortunate because Artistic Director Trevor Schoonmaker, whose day job is chief curator at the Nasher Museum at Duke University in North Carolina, has produced a thoughtful examination of timely concerns of race and power, migration and history.

I heard grumblings of discontent that Prospect’s seventy-three artists include even fewer local residents than in previous years, and that unmoored allusions to a dizzying array of sites around the globe disregard NOLA almost entirely. That is true, in part: Schoonmaker is a specialist in contemporary African art, and much of the show draws on his links to places far from Louisiana. But that’s not entirely a bad thing.

What might at first seem like forced or tenuous relationships between other parts of the world and New Orleans (too often did a wall text about Lagos, Bombay, or Havana end with a tacked-on “much like the problems of New Orleans” conclusion) can be understood instead as Prospect striving to initiate a truly global conversation. Despite the show’s title this year, The Lotus in Spite of the Swamp (an infelicitous riff on jazz being “a lily in spite of the swamp,” saxophonist Archie Shepp’s notion of music as a form of cultural resistance to oppression), Schoonmaker’s self-appointed task was not to dredge the swamp (clarifying murky histories about Louisiana, perhaps) but rather to put the spotlight on the lotus (objects and practices of cultural value, from around the world, that emerge in hardship). In this sense, introducing New Orleans to interesting African artists could register the city’s entrance into a new phase of global interconnectedness. Schoonmaker’s effort to bring a range of aesthetic practices from the Global South to NOLA is commendable, particularly given the city’s rich but problematic internationalist history (its many years as the site of the biggest slave market in the antebellum United States, for example). 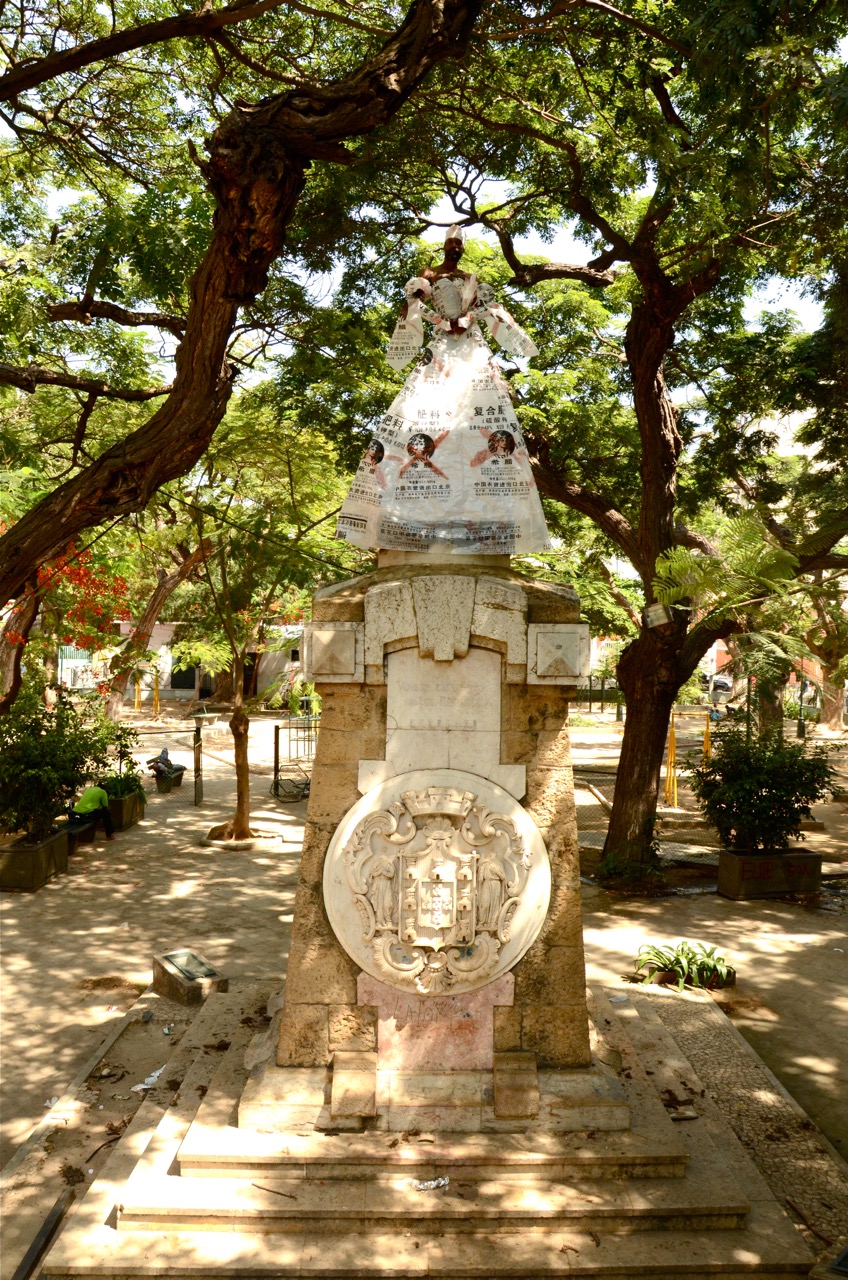 At its best this emboldens viewers to make connections across time and geography, and to explore the political stakes of lateral critiques of inequity. The most prescient work of the last Prospect, in 2014, was William Cordova’s staged showdown between the Soul Rebels brass band and the colossal Robert E. Lee statue in the New Orleans city center, in which the all-black group played loud and proud from a rooftop facing the Confederate general. Three years later, the monument was removed, and the towering pedestal has stood empty since. A similar decommissioning of statues of white former overlords took place in Angola following decolonialization (1961–74), and civil war (1975–2002), and artist Kiluanji Kia Henda created a body of work that speculates about how to employ these vacant bases. For his photographic series at Prospect, Henda invited his friends and others to stand atop the empty pedestals, giving a glimpse of an alternate universe in which the contest for historical memorialization could be adjudicated in a more democratic or quotidian fashion. Dawit L. Petros’s work in The Stranger’s Notebook (2016) rends the notion of an essential bond between place and identity, revealing the polyvalent character of both. Journeying throughout Africa for a year in 2014–15, employing a late-nineteenth-century travel story written by fellow Eritrean Fesseha Giyorgis and Albert Camus’s 1942 book The Stranger as literary guides, Petros photographed himself balancing a floor-length mirror on his shoulder, or capturing subjects he encountered shot from behind. As a black tourist in Africa, Petros poses questions about authenticity and belonging in the context of long histories of voluntary and involuntary intra- and extra-African migrations. 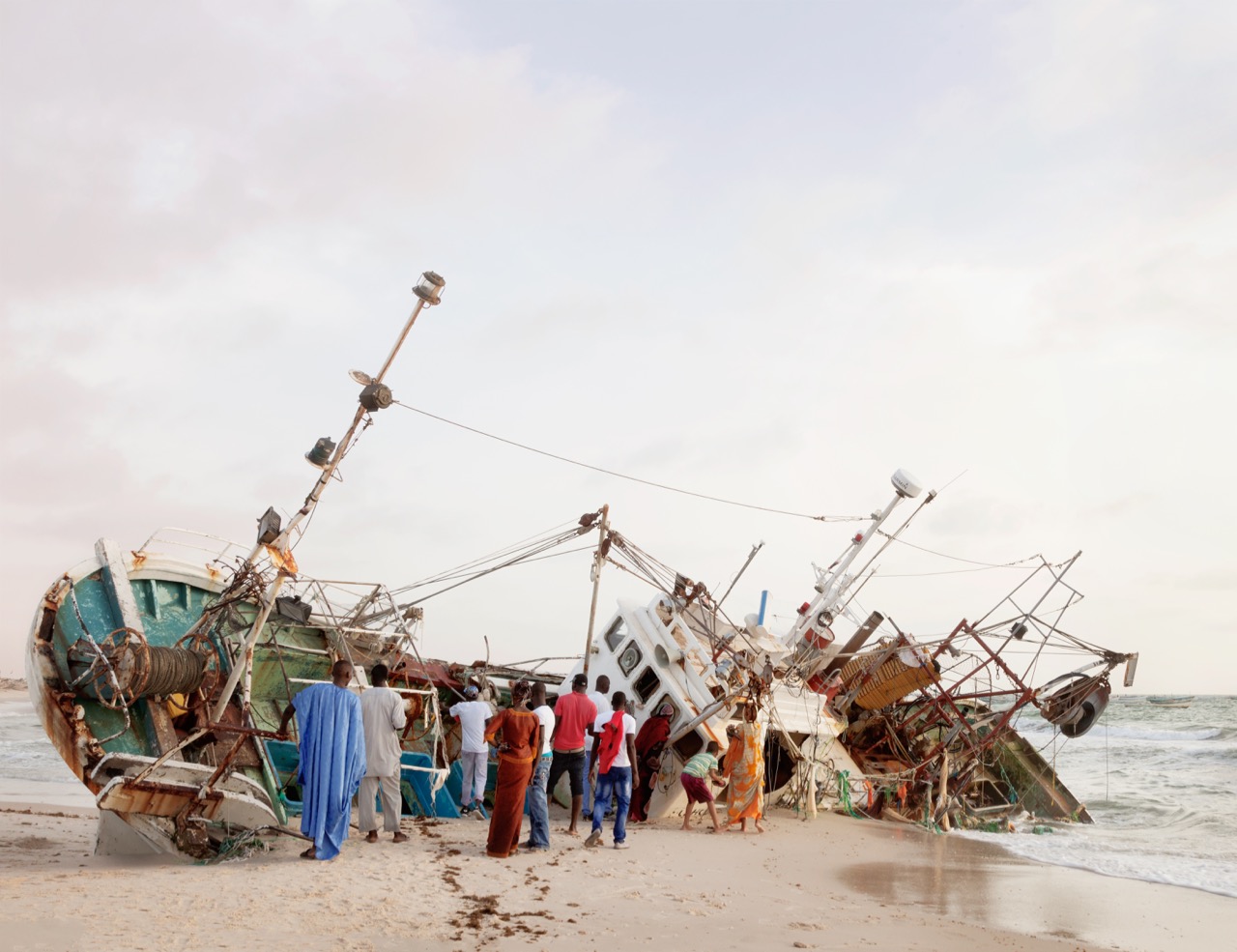 Still, as in past Prospects, the works that engage directly with New Orleans provide the keenest look into the raw economic and ecological contradictions of our moment. In Louisiana this often relates to climate change, and the strongest pieces in this Prospect point to the stakes local communities have in preserving a littoral way of life as the waters encroach. Monique Verdin’s photographic series about her Houma tribe’s struggle to remain in the bayou as ancestral land is lost to rising sea levels is a heart-wrenching portrayal both of broken treaties with Native Americans and the broken contract with the future caused by an exploitative and inharmonious instrumentalization of nature. Jeff Whetstone’s photographs taken upriver in Louisiana explore the interstitial tidal and flood zone between river and levee—the batture—that locals use as a kind of public commons because its transitory existence eludes property claims. In an accompanying film, shots of enormous container ships from parts international are shown moving doggedly along the Mississippi, dwarfing but not extinguishing the precarious existence of the men and women who haunt the spaces no one else uses, and presenting an affecting document of the gleaners and gatherers—the fisherman, snake catchers, and flotsam collectors—that capitalism neglects. 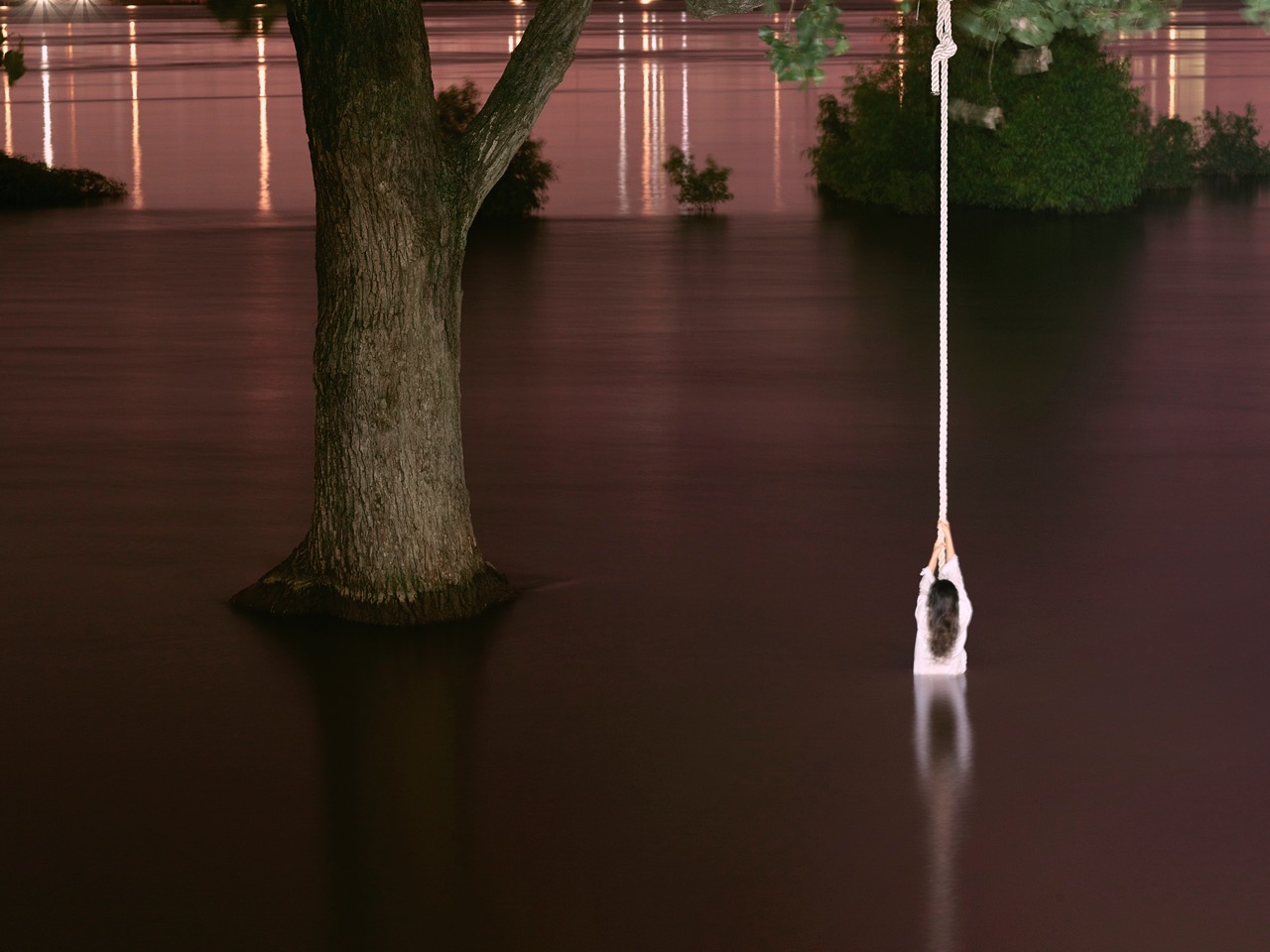 Jeff Whetstone, Ode to the Algiers Batture, from The Batture Ritual, 2017. Image courtesy of the artist.

Thankfully, there is no sense of merely “touching down” here; though Whetstone is based in Princeton, New Jersey, his work demonstrates how localism in its best sense is a sustained engagement with place and people. The flawed infrastructure of Prospect is, however, limiting the exhibition’s potential to nourish a conversation between the near and the distant: the failure to see education, signage, and public involvement as curatorial responsibilities discounts civic participation, and its lack of commitment to an informed and critical discourse leans on publicity and media visibility rather than exchange and depth.

Eva Díaz is associate professor in the History of Art and Design Department at Pratt Institute. Her book The Experimenters: Chance and Design at Black Mountain College was released in 2014 by the University of Chicago Press. She is currently at work on a project about R. Buckminster Fuller’s ideas about space exploration, and their legacy in contemporary art, titled “After Spaceship Earth.”