From the missing person to civil death: Daniel Heller-Roazen explores the concept of disappearance. 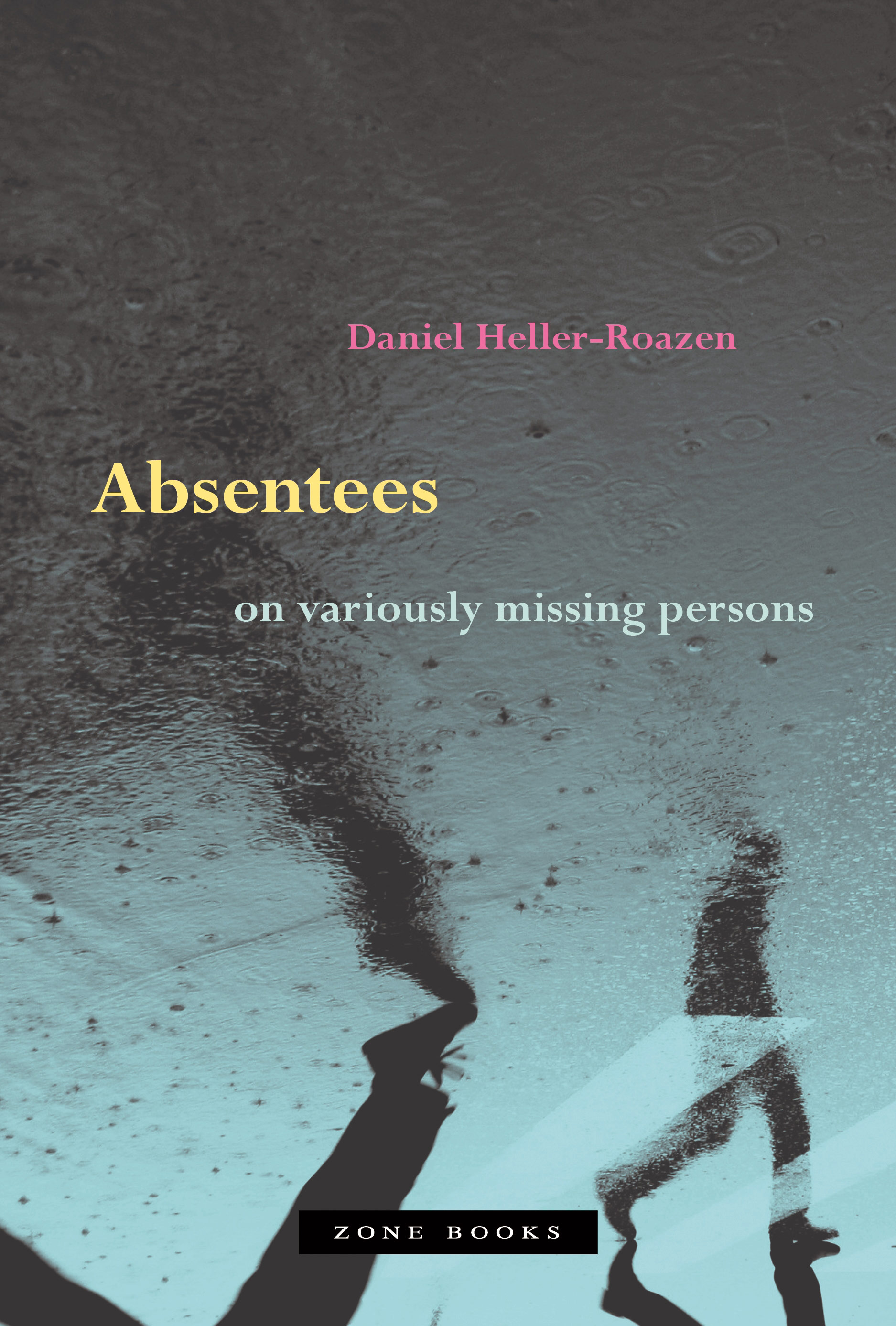 I first read Daniel Heller-Roazen, who is currently a professor of comp lit at Princeton, in the late 1990s, when he translated Giorgio Agamben, the Italian philosopher with whom he still shares a voracious erudition and essayistic elegance. Heller-Roazen’s particular skill is to light on an overlooked historical concept, or textual thread, that turns out to ramify through different periods and cultures, touching acutely on the present. In earlier books, he has written about the Roman de la rose, Pythagoras and harmony, the forgetting of language, and the “sixth sense” by which (according to Aristotle) we feel ourselves feeling. The Enemy of All (2009) was about piracy and the law; Dark Tongues (2013) explored “jargon” spoken by crooks and outcasts. Absentees is Heller-Roazen’s ninth book, an apparently esoteric, actually urgent study of the ways people become nonpersons: “They are always in some sense ‘missing,’ yet the forms of their absence and absenting are diverse.”

Who are they, these “absentees?” They include those who have disappeared (a vast and disparate cohort); servants, serfs, and slaves; foreign visitors accorded wildly varying kinds of welcome; the very young and the very old; sick and disabled people; those whose gender is “out of place.” These are positions or predicaments defined by law, ritual, or myth; expressed in exile, punishment, or incarceration; plainly or obliquely manifest in art and literature. (Absentees moves swiftly, but persuasively, and sometimes in a single short chapter, between Greek and Roman law, the Talmud, medieval Christian theology, and nineteenth-century fiction.) This ubiquity, which seems at first to risk diluting his argument, is essential to Heller-Roazen’s point and project: “those lacking in full personhood may be less the exception than the rule.” While every society works to distinguish itself from the barbarians who may imperil its margins, such differences are hard to establish or enforce, and typically threaten to collapse, or to end in a paradox when the outlier defines the norm.

Consider the category of the missing person, which dominates the opening chapters of Absentees. The vanished or absconded “persist, for a time, in a legal regime distinct from that of ordinary life and death.” In the aftermath of accident, war, or other disaster, the question is not so much whether the individual is really alive or dead, but when he or she may plausibly be killed off according to the law. A great deal depends on such decisions: the disposal of an estate, recovery of debts, the fate of spouse, children, or other chattels. Heller-Roazen tracks the problem across numerous historical and contemporary legal systems. In seventeenth-century England, for example, seven years was considered long enough for a vanished mariner’s wife to wait before assuming he had perished. With its narrative potential for protracted suspense and disrupting return, disappearance at sea is a perennial literary theme—Penelope in the Odyssey is the original waiting wife. But there are more mundane departures: the strange indeterminacy of the missing is weirdly expressed in Nathaniel Hawthorne’s 1835 short story “Wakefield,” whose protagonist—a spectral refusenik cousin to Melville’s Bartleby—abandons his wife and simply moves to a nearby street for twenty years, before returning and taking up his old life again.

Wakefield survives, or persists, in his long obscurity “without being admitted among the dead.” Such figures, in life as in fiction, hover between this world and the next—ghosts too are nonpersons. Death itself presents a problem for law and religion. Is a corpse still a person? The answer has to be yes and no—every culture stops short of treating the dead as mere things—and the ambiguities proliferate when Heller-Roazen turns to people who’ve been deliberately consigned to this legal space between. He adduces some lurid cases and categories, such as criminals who have fled before trial but on their conviction are executed in effigy. In Denmark, in 1663, a dummy representing the treasonous Count Corfitz Uhlfeldt was filled with animal entrails and put to death by drawing and quartering—the figure’s body parts were even exhibited afterward as gory warning.

Death, the critic Paul de Man once wrote, is another name for “a linguistic predicament.” Heller-Roazen tells us that from Roman law onward a person could be deprived of the rights, duties, and conventions attaching to the living, but still not actually die—they suffered instead a “civil death.” Less starkly, but no less drastically, they might have their status reduced and authority over them and their property handed to a curator or conservator. Does this latter sound familiar? It is the very legal logic to which Britney Spears has famously been subject since 2008. However well-meaning, the #FreeBritney movement and Samantha Stark’s recent documentary Framing Britney Spears both perform a peculiar naivety about the portion of the American population that is not Britney. Civil death or civil reduction: these are exactly the operations carried out daily by police, courts, prisons, hospitals, ICE, and numerous other instruments of biopolitical power. Why #FreeBritney, then? Because, as with Heller-Roazen’s treatment of Homer and Hawthorne, certain mythic cases stand for (or distract from) the more disturbing whole.

Absentees ends on what may seem a frivolous note, with a reflection on children’s games and what it means to be chosen to be “it.” In fact, this last chapter is yet another instance of Heller-Roazen’s amazing deftness and precision: that designation—“You’re it!”—has been ghosting the book all along. The chosen one becomes a thing and not a thing at the same time: “To be counted out is, for better or for worse, always to be taken into account.” And such acts of naming and denoting pervade ordinary speech as much as they do the fiction of Balzac, Zola, Gogol, and Kafka. Among other things, Absentees bristles with fresh readings of these and other writers—here as in his earlier books, Heller-Roazen’s ambitious project modestly takes the form of what looks like literary scholarship. In fact, it’s a fundamental inquiry into the disposition among bodies, language, and politics.