Nonfiction
Let Me Tell You What I Mean

On Hemingway, synonyms, and rancid butter: a collection of essays by Joan Didion. 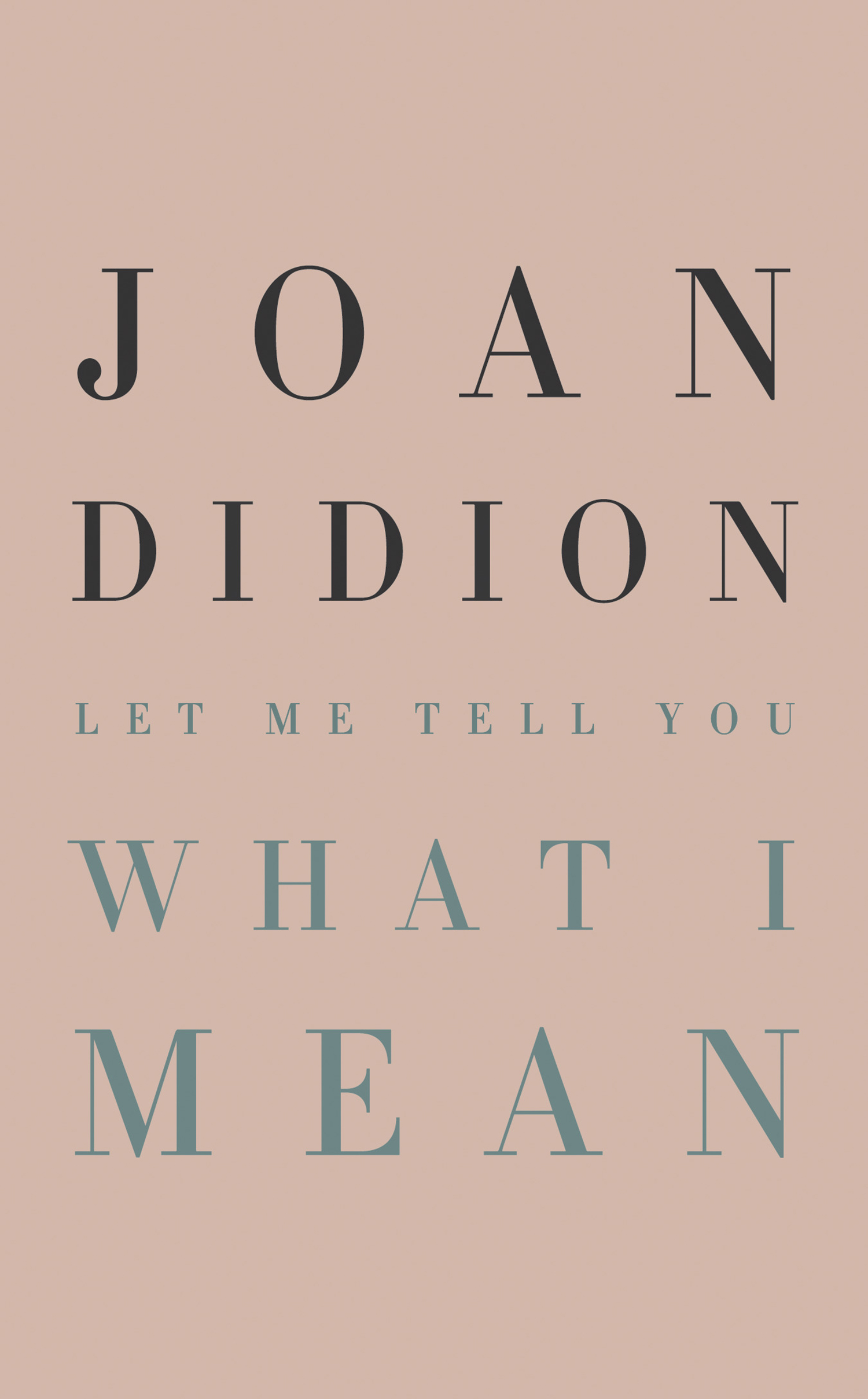 A “new” Didion—the heart quickens. Aged eighty-six, she may no longer be expected to turn out acid disquisitions on the present scene and its dismal players, or slim valedictory works like her last two properly new books, The Year of Magical Thinking and Blue Nights. But the prospect of uncollected or even unpublished Didion remains thrilling; it seems there are no dregs as such. In 2017, South and West was an unexpected, raw artefact: her abandoned notes for 1970s pieces about California and some Southern states. Let Me Tell You What I Mean is being marketed as a collection of “early” Didion essays, though its contents were first published between the late sixties and the new millennium. It is certainly further evidence of what Hilton Als, in his foreword, calls Didion’s “feeling for the uncanny,” but whether it’s a coherent addition to the Didion corpus is another matter.

Between 1964 and 1969, Didion shared with her husband, John Gregory Dunne, a regular column in the Saturday Evening Post. Her pieces ran only to two thousand words, but as a Vogue-trained pro she made every one essential. As Als points out, word count means these columns sound more opinionated than her later essays: there is more of her steely judgment, less of the telling drift amid the zeitgeist that you get in the longer work in Slouching Towards Bethlehem and The White Album. A piece in defense of the underground press is practically all assertion: “I have never read anything I needed to know in an underground paper.” Observing a meeting of Gamblers Anonymous, she remarks about one member’s self-disclosure: “Her tone was that of someone who had adapted her mode of public address from analgesic commercials.” When another addict mentions attaining gambling-free “serenity,” Didion flees—it is “a word I associate with death.”

The extravagance of American self-pity and sentiment has always been a theme for Didion: she is not herself immune, as she recounts here in “On Being Unchosen by the College of One’s Choice.” Aside from such autobiographical essays, there’s a sense that some of the early pieces in Let Me Tell You What I Mean have been collected now with certain Trumpian resonances in mind. In 1968, Didion took a guided tour of San Simeon, the Californian hilltop castle complex where media baron William Randolph Hearst immured himself with his riches and his fears. It is, as Didion puts it, “exactly the castle a child would build,” a playground where every meal is a picnic—shades of Mar-a-Lago and middens of fast food at the White House. Didion catches some essential, willed infancy as it colonizes the rich and reactionary American soul, a sinister innocence to match that of the hippies she wrote about elsewhere. “I had the distinct sense that we were on the track of something revelatory,” she writes in the same year, watching Nancy Reagan fussing like a 1940s housewife for the television cameras.

There’s already a careful, scolding, bemused concentration on language in the pieces here that were written for the Saturday Evening Post. Als contends that Didion’s writing has always been partly about writing; but it was nearly another decade before she described her own habits, ambitions, and limitations as a writer. “Why I Write,” from 1976, makes it clear that her skills and deficits are one and the same. She recalls her undergraduate efforts, at Berkeley, to get to grips with ideas: “I would try to contemplate the Hegelian dialectic and would find myself concentrating instead on a flowering pear tree outside my window and the particular way the petals fell on my floor.” Specifics were, and remained, everything; they persisted in memory and imagination: the rancidity of butter in the dining car of a Southern Pacific train during her last year at Berkeley, or a view of oil refineries through the tinted window of a Greyhound bus. Writing meant simply (simply!) paying attention to such details, asking herself: “What is going on in these pictures in my mind?”

Didion famously taught herself to write by retyping passages from Hemingway—as usual, “famously” misrepresents a more diffuse truth. As she relates in “Telling Stories,” from 1978, her training was also with Vogue old-timers like Allene Talmey, under whose tutelage “We were connoisseurs of synonyms. We were collectors of verbs.” Hemingway was key, however. In “Last Words,” she marvels at his exact, affecting way with the smallest elements of the sentence: “the,” “and,” a well-placed comma. “Last Words,” which Didion wrote for the New Yorker in 1998, is an essay about posthumous reputation, and about what a writer considers to be writing and what he or she does not. Composed as a kind of review essay in advance of the publication of Hemingway’s unfinished novel True at First Light, it’s also a statement regarding the distinction between what’s “written” and what’s merely “set down.” Do not treat me as you’ve treated Hemingway, Didion seems to say—my only work is the stuff that’s been worked.

What then of Let Me Tell You What I Mean and its corralling of perfectly polished essays into something that doesn’t quite feel like a book by Joan Didion? Of course, essay collections may be as motley as one likes, and you could anyway assemble your own new Didion anthology (including uncollected obscurities) today, with a little judicious googling and access to one or two magazine archives. It’s nice but not all that instructive to read her 1960s columns alongside, say, her later (but pre-scandal) profile of Martha Stewart, or a pleasingly tart piece about Robert Mapplethorpe’s photographs of women. Didion’s collections have usually been constellations: they inscribe a moment or a mood, in ways this book does not. “Look hard enough, and you can’t miss the shimmer,” she says in “Why I Write.” I would have loved a harder look—Didion meets Helen Gurley Brown, Didion decides to make twenty figgy puddings—at the unreprinted Post columns: a proper compendium of the years just before she stopped being “early.”