Sally to the alley: the venerable gallery finds its new home. 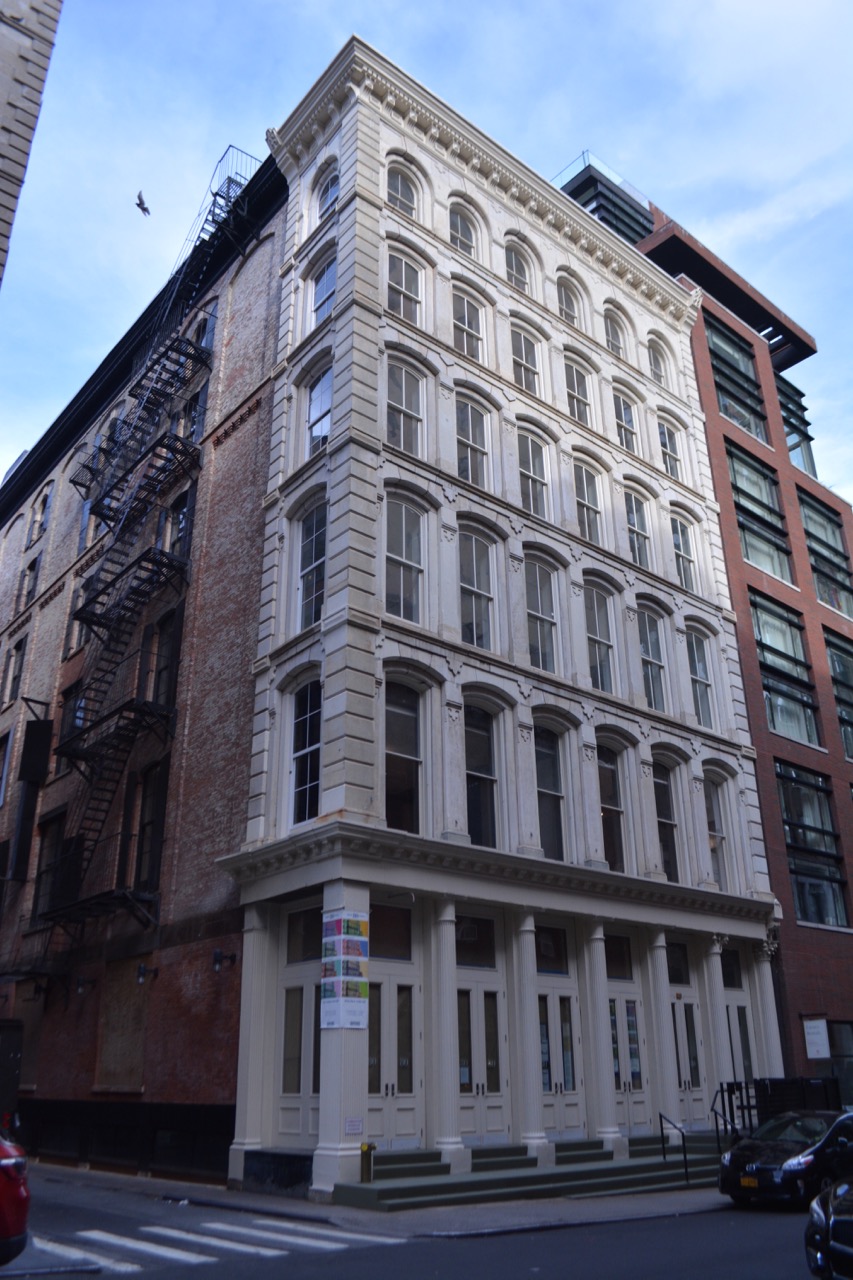 For its latest Tribeca incarnation, in its sixth location since 1972, Artists Space decided against White Street for its main entrance. Rather than use the bank of double doors in the old General Tools & Instruments building’s pillared façade (a choice that would have been in keeping with the post-industrial area’s upscale retail and commercial-gallery aesthetics), architects Bade Stageberg Cox created an ingenious side inlet off Cortlandt Alley. Marked with graffiti, pull-down metal gates, rusted loading docks, and dark tangles of fire-escape ladders, the derelict passageway runs like a proud spider vein through three blocks of the retouched neighborhood. Visually, it powerfully recalls the early days of the beloved arts nonprofit, which was founded nearby in Soho, in the orbit of countless artists’ lofts, and which has somehow hung on downtown even in their priced-out wake. The alley, it seems, provides a kind of historical frame for the institution’s new iteration.

It also delivers visitors to the heart of the flexibly configured two-floor space. To enter, you step from it, through heavy doors, and find yourself at the midpoint of the narrow nineteenth-century warehouse, on an airy landing between levels. It’s lovely. 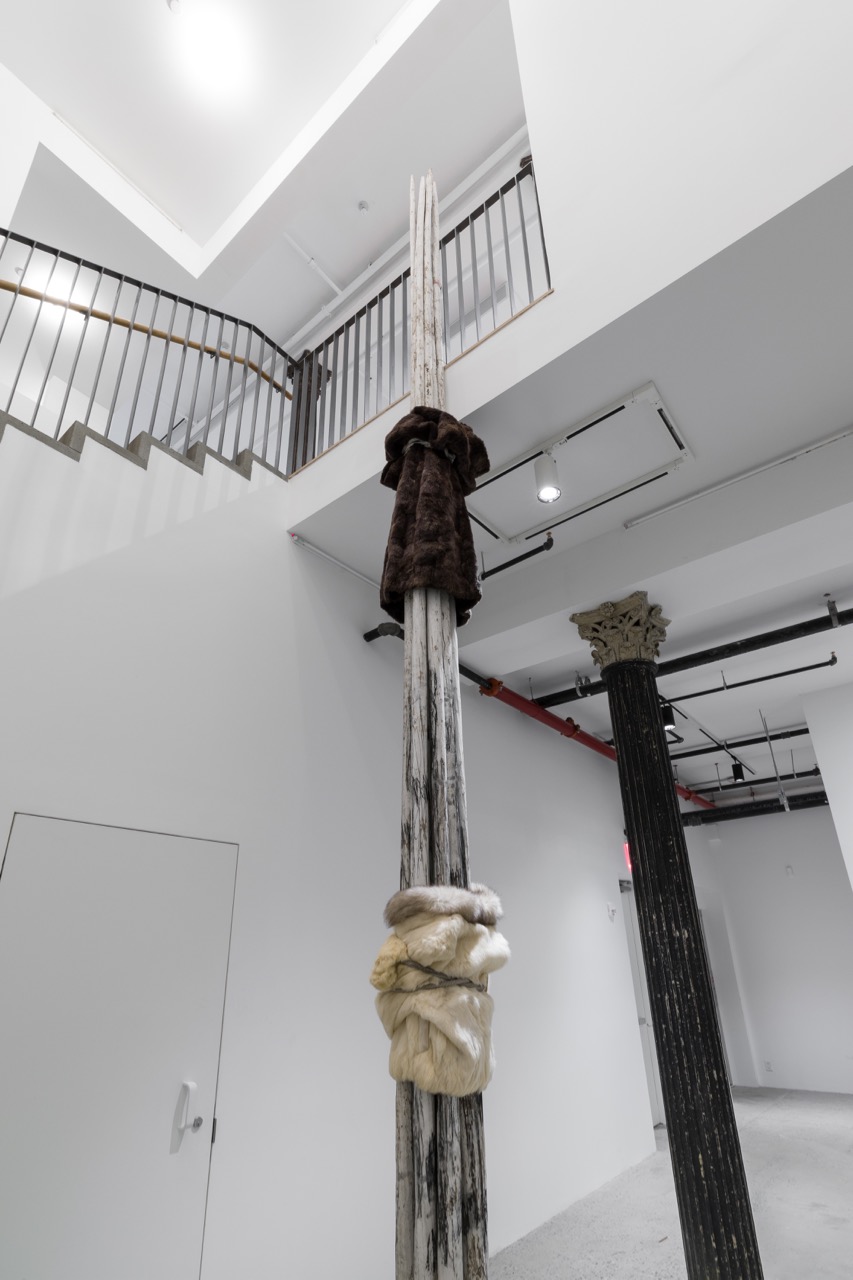 Duane Linklater, one of the four artists presenting new work in the untitled inaugural exhibition (or series of overlapping solo shows), takes advantage of the entrance, using it as a viewing balcony for a characteristically spare and affecting architectural intervention. Landlesscolumnbundle (2019) is an austere pillar composed of eight teepee poles, lashed together with rope and fur coats. It rises from the basement-level floor, up through the sunlit stairwell, the lines of its tall wood lengths echoing the vertical fluting of the unfinished cast-iron columns throughout the space, left exposed in the renovation. As Bade Stageberg Cox explain in the press release, writing of this and other such design gestures of theirs, “the erasure of the visible history of the space is minimized.”

An Omaskêko Ininiwak from Moose Cree First Nation in Northern Ontario, who frequently uses Indigenous materials and forms in his work, Linklater shares the architects’ impulse and takes it further: he makes visible an erased history predating the structure itself. (Cortlandt Alley is just a block west of Broadway, which was, long before the Dutch came to Mannahatta, a Lenape trade route.) 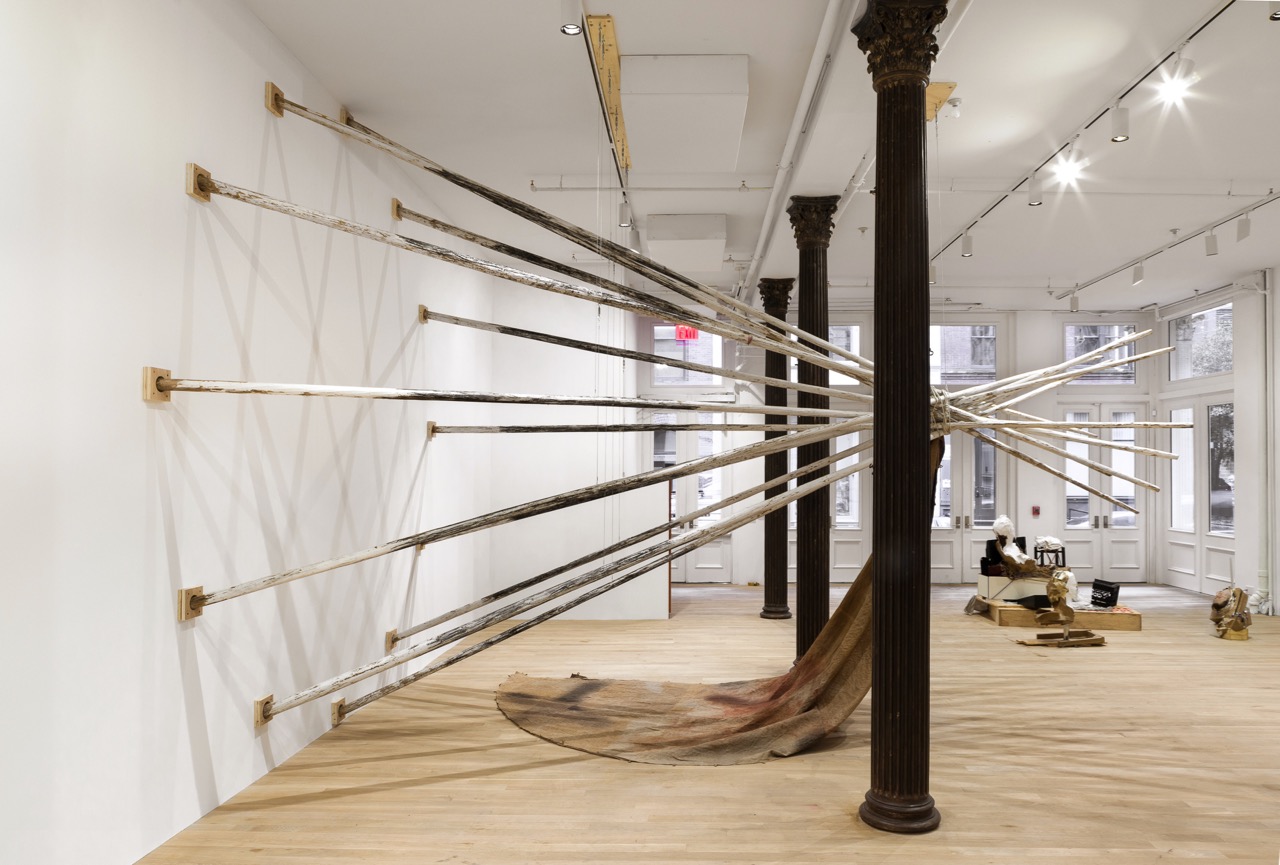 His equally elegant dislodgevanishskinground (2019)—a teepee frame that, with the assistance of steel cables and wooden brackets, has been rotated 90 degrees to protrude horizontally from a wall—is the striking pyramidal focal point of the main ground-floor gallery space. It’s less subtle than landlesscolumnbundle in its evocation of an unfathomably brutal chapter of local displacement (next to which recent decades of Soho-Tribeca gentrification amount to very little), but it’s still a work of great nuance. After absorbing the initial impact of its skeletal, torqued presence, you realize that the cloth cover, which falls perpendicularly from the bare teepee’s tip to trail on the floor, resembles the long cloak of an unseen figure. 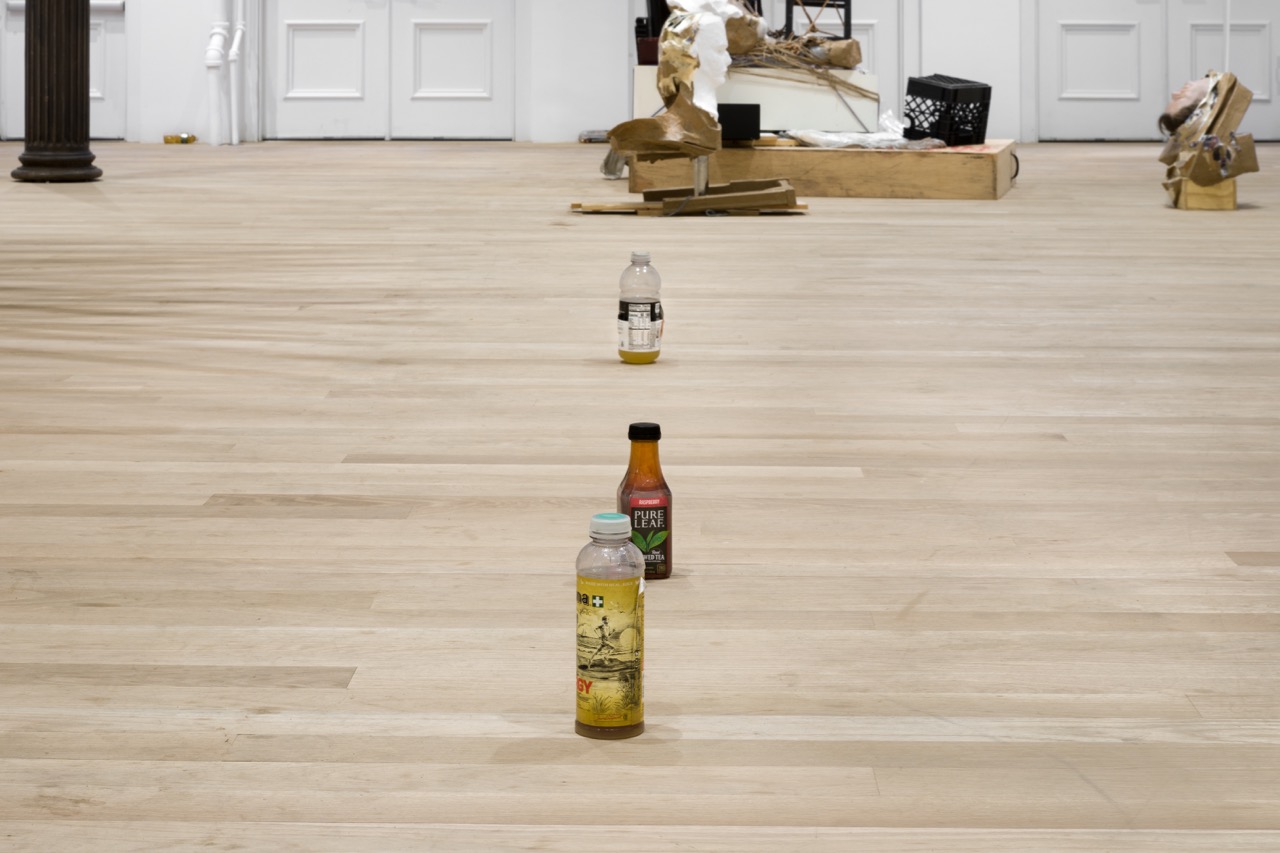 Jason Hirata’s Why Not Lie? (dated 2020, in anticipation of its future completion), is also a profound representation of absence, though a dispersed and antimonumental one. For it, beverage bottles of urine—collected from around the city, filled by people without homes, or by drivers and gig workers without access to toilets—are scattered like Easter eggs throughout the space as gently recriminating symbols of cultural exclusion and social invisibility. The specimens of dark amber liquid (many of them labeled “Poland Spring”) will be returned after the exhibition closes to the spots where Hirata found them. 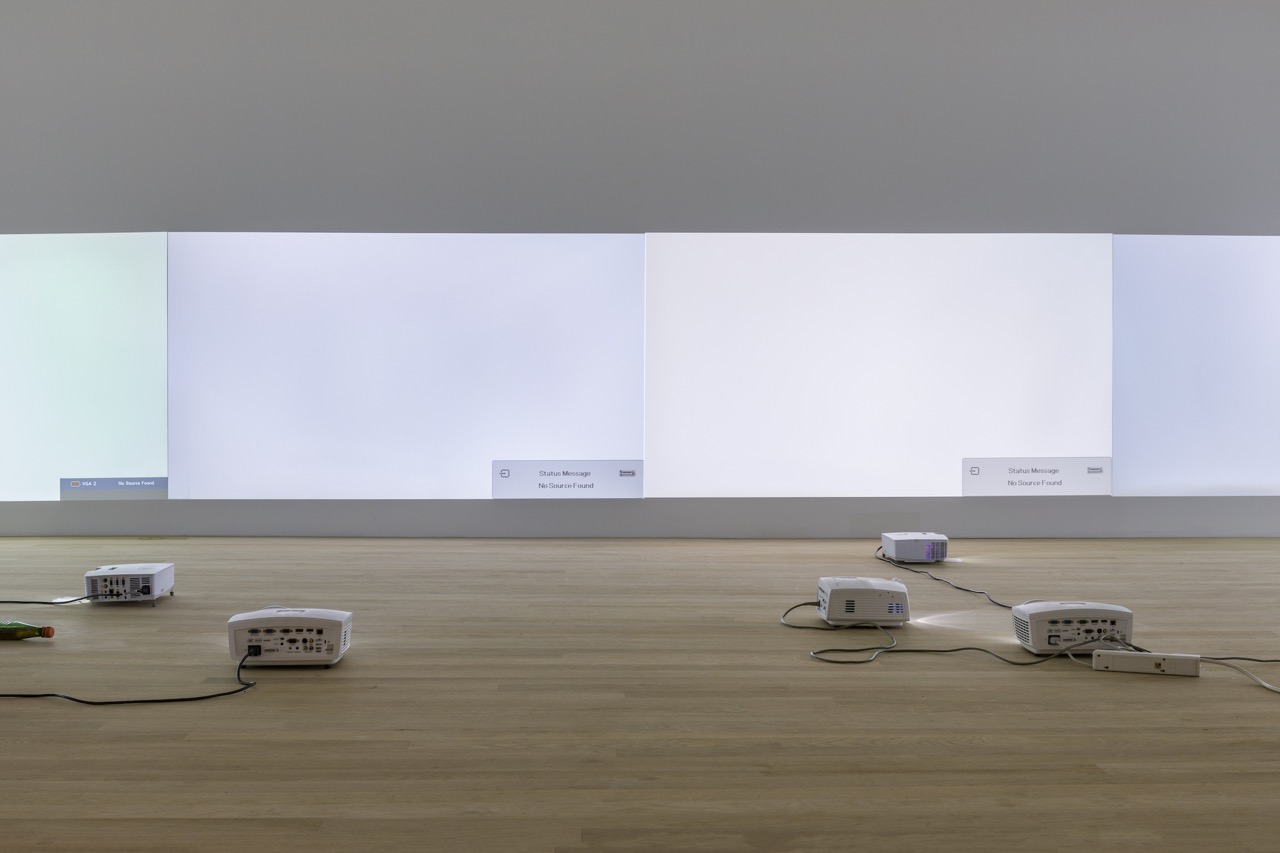 His installation Floaters (2020) also promises to vanish. It’s a video work that features not video, but a battalion of projectors powered on to illuminate the room with their default white rectangles and small, gray, accidentally poetic “no source found” text panels. With the equipment’s return to its lender (NYU’s 80WSE gallery, where the artist has a concurrent show), the piece will be designated complete.

In the meantime, Floaters is quite beautiful, ringing the smaller windowless gallery (opposite the glass-paneled doors looking out on White Street) with a bright border along the floor, like incandescent wainscoting or the beam of a spaceship at landing or lift off. 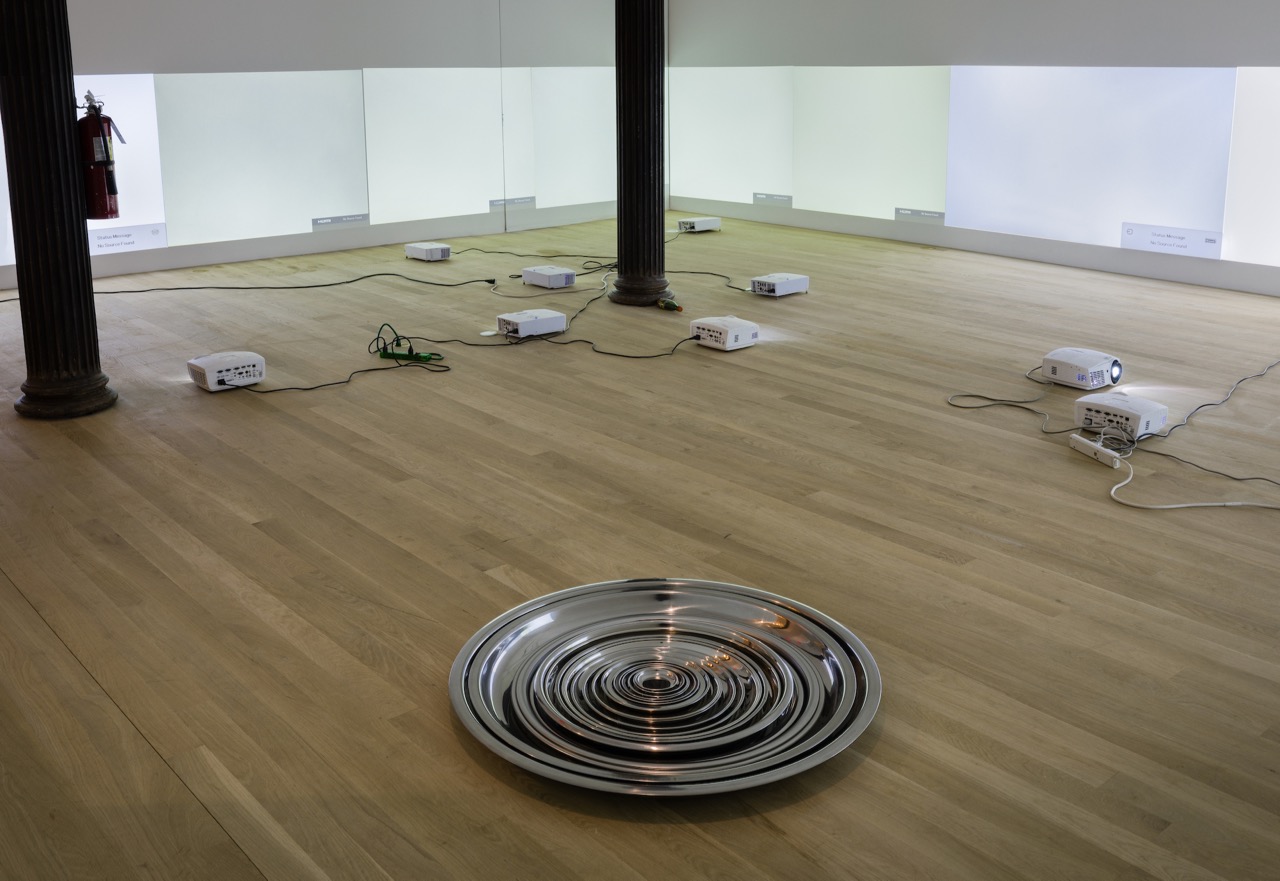 The latter association is suggested by Yuki Kimura’s nearby sculpture The Circle (2019), which rests without fanfare on the floor (like Hirata’s projectors and bottles of pee). It’s humbly constructed from twenty-one round stainless-steel trays of incrementally varied sizes, arranged in shining concentric circles, from enormous platter to tiny dish. This target-like accumulation of readymades is companion to the also innocuous but out-of-place cherry laminate units of her ongoing project Wardrobe Extensions (2016–ongoing). The three bland, inexpensive storage vessels have been excised, we learn, from her childhood bedroom. Spared the landfill, they have toured internationally as temporary geometric architectural details of galleries, now installed, for the fifth time, along the perimeter of Artists Space. One would never guess at their origin, or consider that they had personal meaning to the artist. So like placeholders are they—as imports, objects, or shapes—it’s almost disturbing to know that they do. 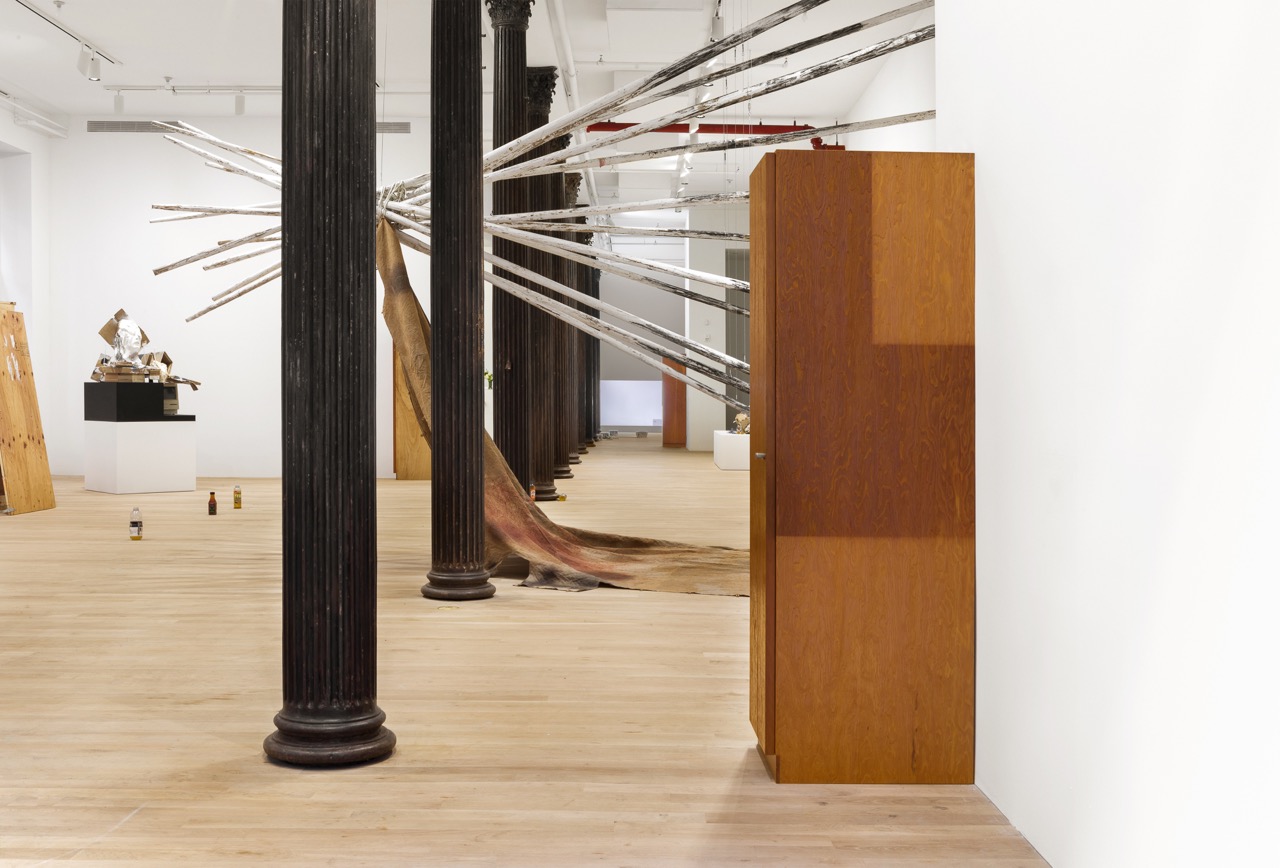 Danica Barboza is the most perplexing artist here, though. The inclusion of her mixed-media work—thick with irony, complex via a calculated messiness, and characterized by a satirical engagement with modernist assemblage and pastiche-y postmodernism alike—thwarts any unifying theory of a curatorial rationale for the grouping of the four artists. (That may be the point.) Materials as diverse as PVC piping, plastic or wooden crates, hand-modeled faces, an early Mac computer, rooibos tea bags, twine, and a silicone sex doll mingle in her anything-goes sculptures. Where the other three artists are earnest and economical (conceptually and otherwise), Barboza embraces faux expressionism, theatricality, and excess. 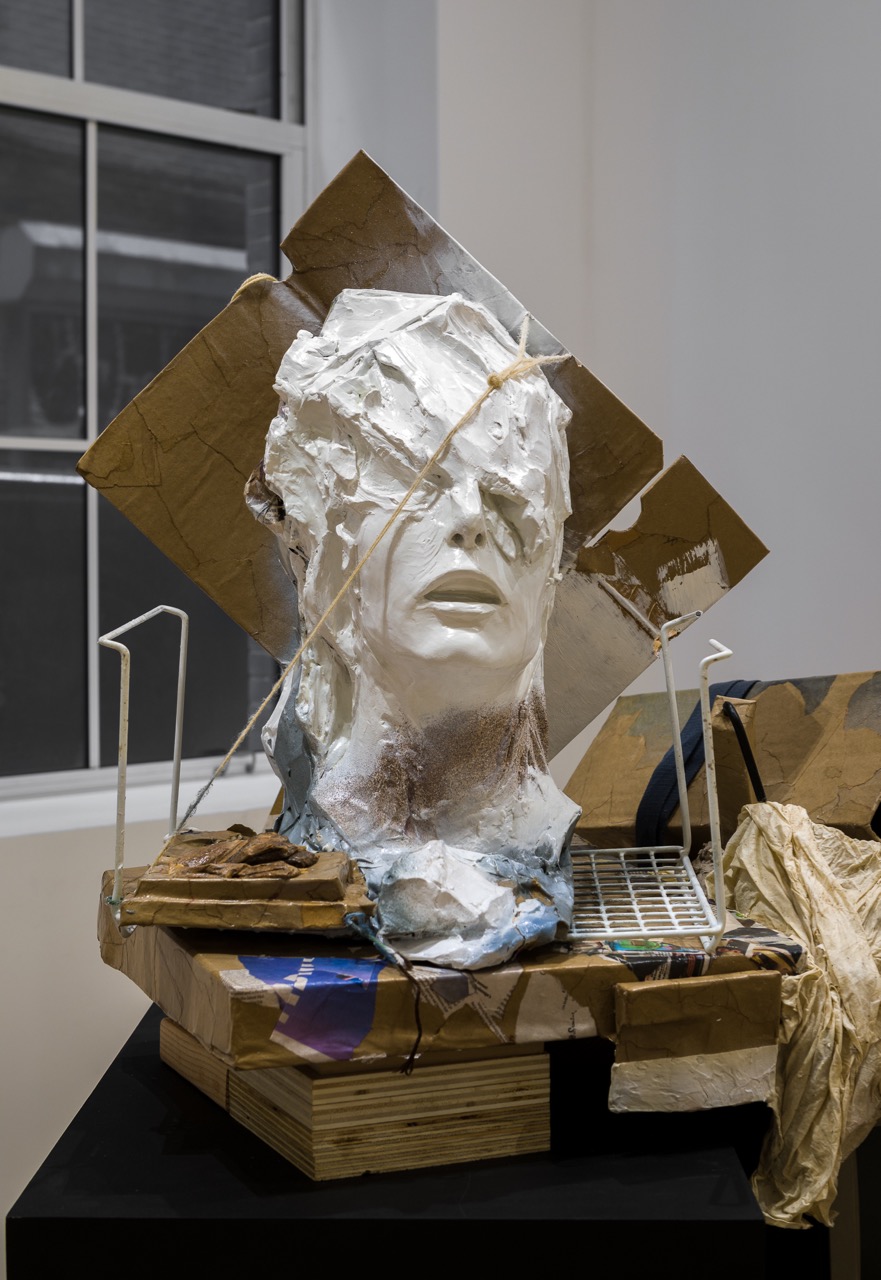 Her wild-card inclusion is surprisingly unproblematic; the playful, acerbic mood of her work doesn’t undercut the concerns of Linklater, Hirata, and Kimura. The unthematic, simultaneous exhibitions most of all, and most importantly, succeed in demonstrating the possibilities of the hard-won new space. And the full, practical, and aesthetic significance of the side entrance became apparent opening weekend, during Ei Arakawa’s flabbergasting and joyful group performance, staged partially in Cortlandt Alley and partially in Artists Space’s lower level. 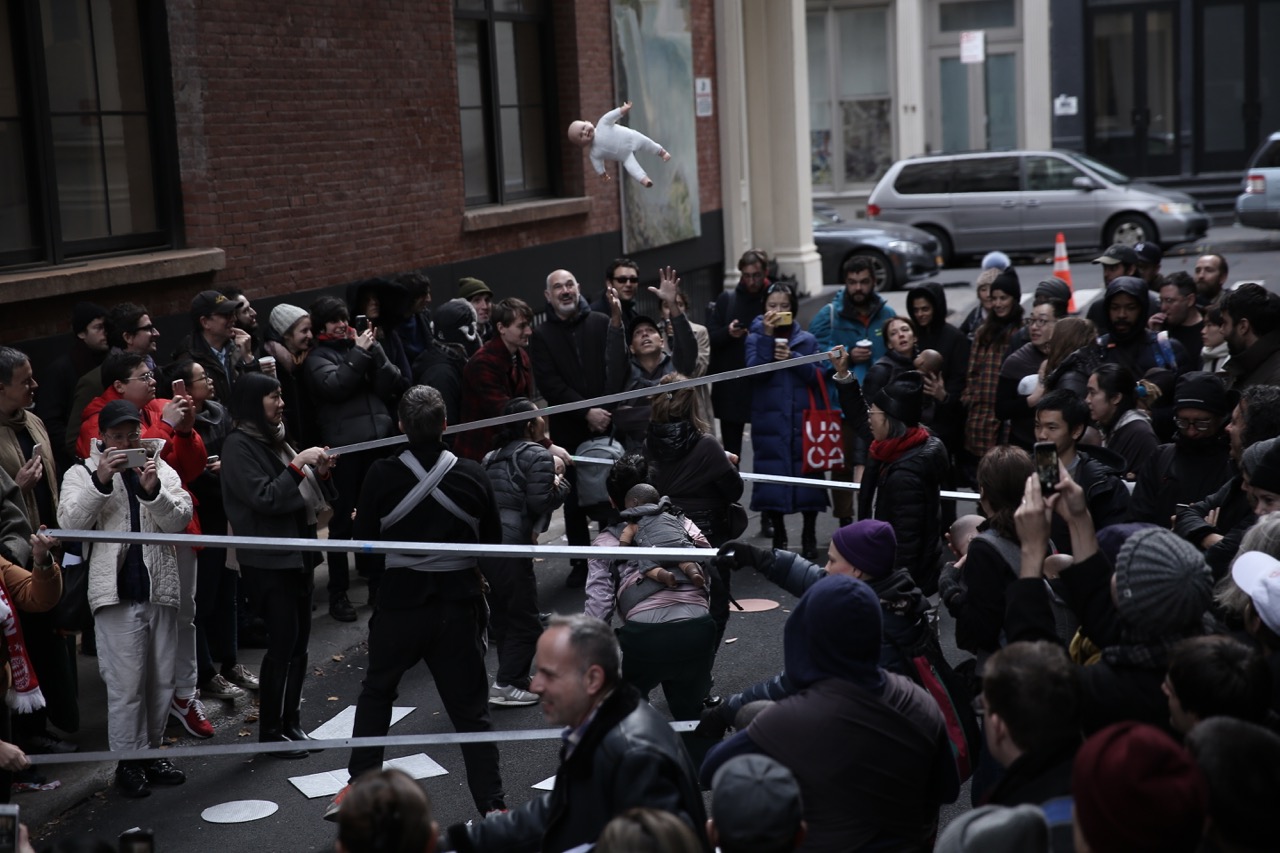 His WEWORK BABIES—an inspired meditation on queer parenting and creative multitasking, entwined with an absurdist exorcism of startup bro-culture’s real estate–gobbling charlatanism so aptly emblematized by the collapsing “flexible workspace” empire—was a perfect celebration of Artists Space’s against-the-odds, continued existence in one of the most expensive neighborhoods in the city. And after, as we lingered outside on the asphalt, where we’d earlier watched performers with baby dolls strapped to their backs and fronts jog in place and improvise large-scale sculptures, it became clear that it’s not just the cluttered anti-thoroughfare’s throwback appearance and its contrast with the hyper-gentrified surroundings that makes 11 Cortlandt Alley so dreamy. It’s also the way that the respite from through traffic and the natural spillover area it affords—for performing, watching, hanging out, and whatever else—symbolize the expansive, inclusive alternative space’s erosion of traditional bounds.