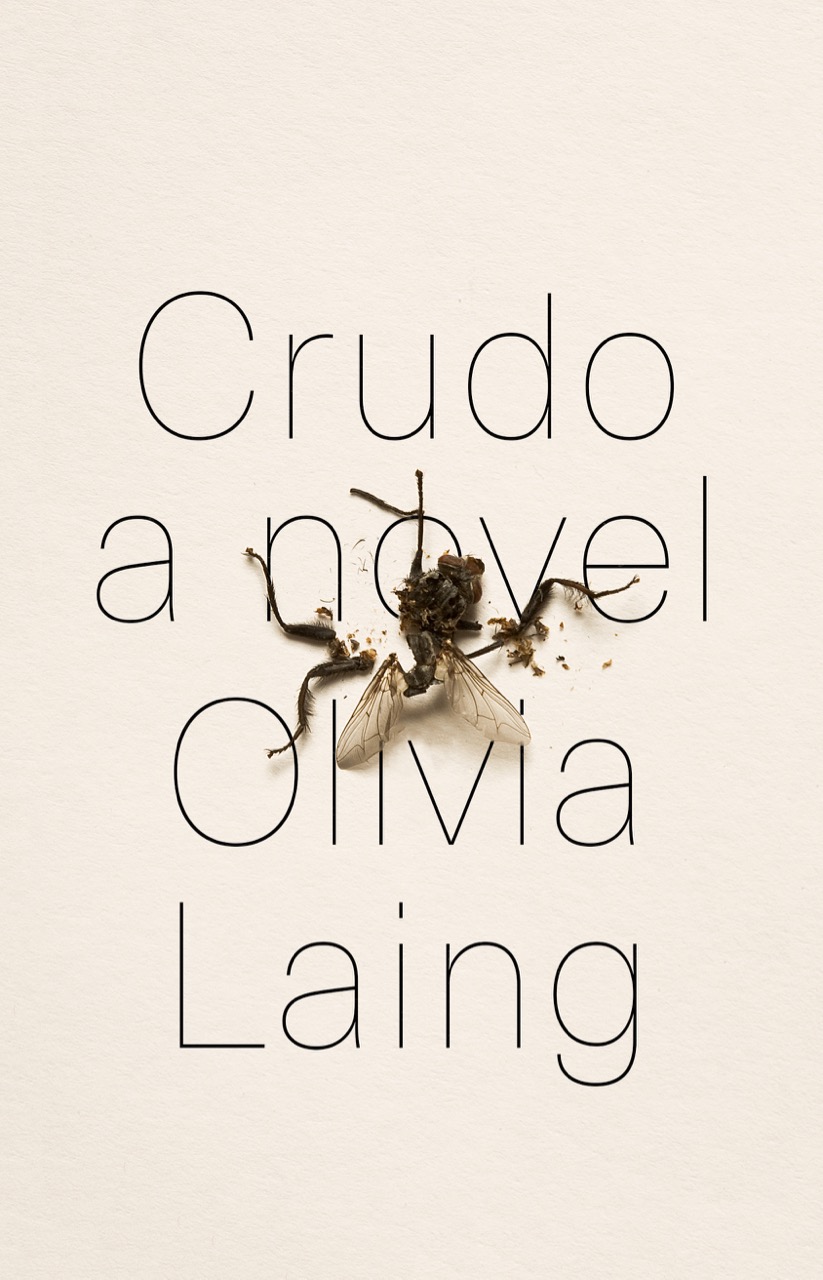 Like Olivia Laing, in the summer of 2017 I was transfixed by a stream of breaking news via Twitter; couldn’t seem to write what I had planned; and, for a couple of days lying by a swimming pool, read Chris Kraus’s just-released After Kathy Acker—the biography of a personal literary hero by a personal literary hero. But even in the absence of such parallels, readers may find echoes of their own first hot season under Trump in Crudo, Laing’s racing depiction of an interior life constantly rattled by apocalyptic notifications. The British author, who has previously written three acclaimed nonfiction books—hybrid works of cultural criticism united by their elegantly intimate first-person narration—reports that she composed her first novel in just seven weeks, taking a manic break from a stalled project to capture the buzzing, stomach-churning quality of the moment.

Inspired by both Kraus’s new book and her influential strain of autofiction, Laing takes Acker—the Blood and Guts in High School legend, who died in 1997—as her alter ego, splicing the Burroughsian novelist’s life and work into her own. Famous for lifting passages and plotlines at will, for her astonishing regurgitations and pornographic glosses on the Western literary canon, Acker is reincarnated in Crudo as Kathy, a forty-year-old bride-to-be. Like her main character, Laing recently wed a man twenty-nine years her senior, the poet Ian Patterson, and though she writes in the third person, she blurs the line between the narrator and Kathy and herself with her first line: “Kathy, by which I mean I, was getting married.”

This central conceit—the appropriation of Acker in Acker’s own tradition—rather riskily invites comparisons between the two writers. It’s hard not to measure Laing’s relatively tame protagonist, uneasily counting down the days to her wedding, against the gender-switched heroes of Acker’s Don Quixote (1986) or Great Expectations (1982), whose absurdist adventures mingle with scenes of sexual abasement, for example. And then there is style: Laing, naturally eloquent, in Crudo affects a choppy insouciance, attempting to emulate Acker, who breathed a brutal conceptualism, thrillingly graceless and blank. So it was at first an effort for me to surrender to Crudo on its own terms, but mostly I did, reading it in the ides of August—again lying by a pool, this time checking Twitter for the Manafort verdict—just a year after the events Laing chronicles.

The novel begins with the couple on vacation in Tuscany’s Val d’Orcia, a cinematic backdrop for the author’s portrait of Kathy’s rising agitation. “Everyone had a husband here,” she observes, alarmed that she may be more like the luxury hotel’s other guests than she thought: “She’d never spent much time with heterosexuals, she didn’t know there were so many of them, and all so similar. White people, men older, women younger.” There is also her dawning claustrophobia. Explaining it to her fiancé, she first offers, “I don’t like proximity.” Trying another tack, she asserts her need for solitude: “it was just that she needed seven hours weeks months years a day totally alone, trawling the bottom of the ocean, it’s why she spent so much time on the internet.”

Kathy plans her wedding “by looking through pictures on Instagram and making unkind comments,” Laing writes, in a tongue-in-cheek description, but elsewhere she portrays Kathy’s trawling solemnly. Her scrying glass (as she calls Twitter at one point) may serve as a distraction, but it can’t be counted on to soothe either vanity or conscience. “Ten years ago, maybe even five, it was possible to ignore atrocities, to believe that these things happened somewhere else, in a different order of reality from your own,” Kathy thinks. Now, “you could go on holiday but you knew corpses washed up there, if not now then then, or later.”

When Kathy returns to England, Laing falls into a more convincing rhythm, handling the hairpin turns of her character’s consciousness and incorporating her stolen lines with new ease. Kathy packs up her old apartment; does a studio visit with a sculptor; clicks the headline “Woman liveblogged her rape on Instagram”; and wonders, as the president peacocks on her favorite platform, taunting Kim Jong-un with his nuclear arsenal, if this is the end. Winding down into a section break on a desolate note, she segues rather magically into Acker’s Florida (1987), a painterly meditation on sexual nihilism based on John Huston’s Key Largo: “Maybe you’re dying and you don’t care anymore. You don’t have anything more to say. In the nothingness, the gray, islands almost disappear into the water.”

Acker isn’t Laing’s only source: Tweets plucked from her own timeline and sentences culled from magazine articles form a collage of shifting registers well suited to the mid-month political chaos. Images from Charlottesville—the procession of tiki torch–bearing neo-Nazis, the murder of counterprotester Heather Heyer—accompany Kathy’s accelerating wedding preparations. But, though their small reception, a house party, is interrupted by reports of Steve Bannon’s firing, and everyone checks their phone while eating cake, the event is a cozily anticlimactic affair. Kathy, falling asleep on the sofa, makes another wedding vow: “she was going to love and honour, everywhere, indiscriminately, those would be her watchwords from now on.” Alas, August contentment brings September malaise. Twitter scrolls ominously in the background of even Kathy’s most introspective moments; self-doubt and looming fascism bracket all experience. “Would this be a moment she looked back on later, damaged in an alley or locked in a cell?” she wonders, sitting at the breakfast table.

In the novel’s last stretch, the genuine expansive love Kathy feels for her husband, previously obscured by the haze of her pre-wedding anxiety, becomes clear. As she boards a plane for New York in the final scene, she realizes, after saying goodbye to him, “She’d never loved anyone before, not really. She’d never known how to do it, how to unfold herself, how to put herself on one side, how to give.” This high-strung book, which reads in turn like a roman à clef, a memoir, and a work of historical fiction set in the almost-present, turns, a little unexpectedly, into a love letter at the end.

Somehow Laing pulls off this resolution, avoiding excessive corniness and maintaining the work’s rough texture of sutured quotations, even as she enters a lyrical free fall of earnest emotion. Long before this redemptive moment, any Acker fan will have gleaned that Laing’s invocation of the author serves more as a dare, as a license for creative abandon and casual piracy than anything else. Yet there is ultimately something Ackerish—and Krausian—in Crudo’s conceptual-confessional entanglement of the mess we call a personal life with a subject as grand as global catastrophe. For that, Laing’s book is truly exciting and, crucially, right on time.