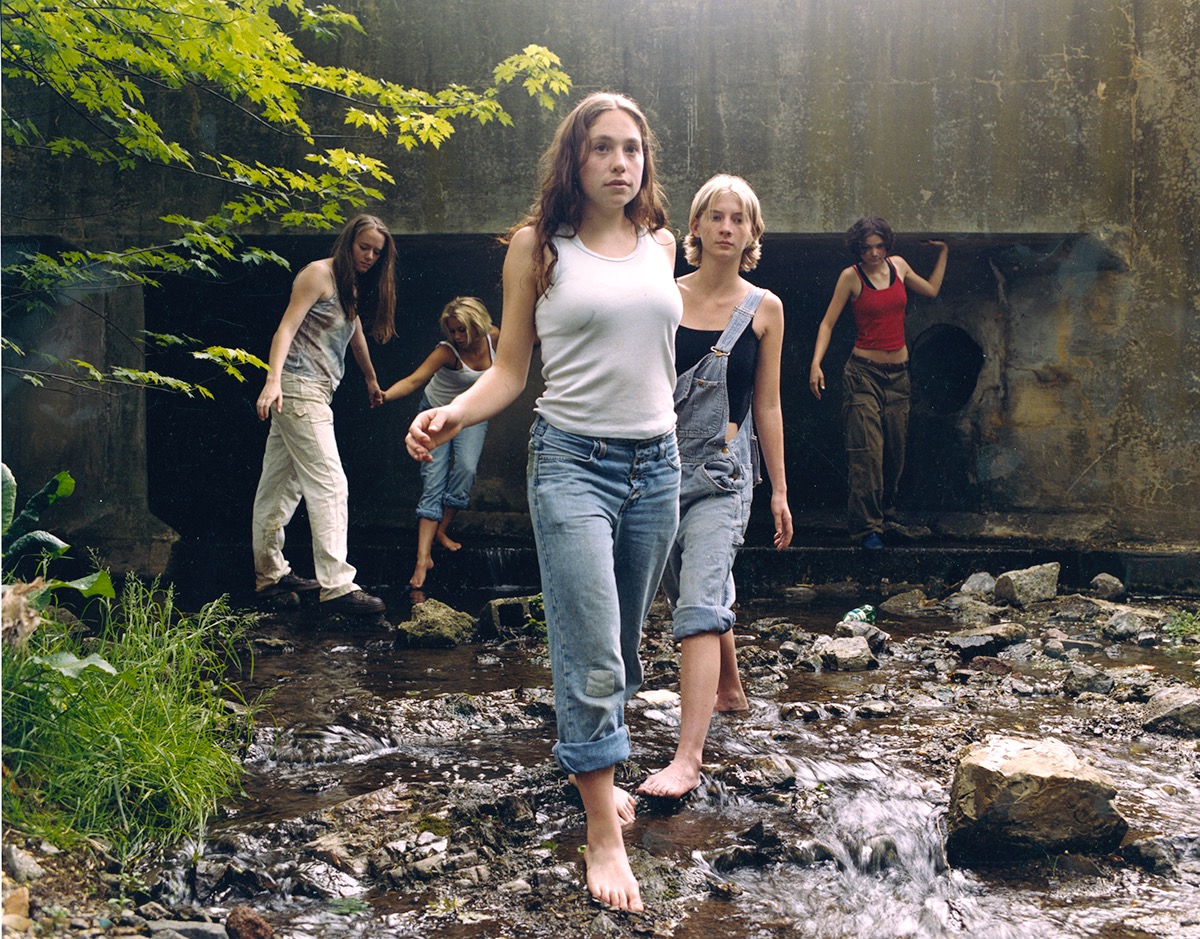 The runaways of Justine Kurland’s Girl Pictures, 1997–2002—feral teens living in moody, thrill-seeking packs at the gorgeous outskirts of civilization—bear a more than passing resemblance to the Runaways. It’s as though the members of the legendary seventies girl band wandered away from their tour bus at a highway rest stop and just kept going. What would their raw rebellion and sexual self-possession look like offstage, without an audience, in the wild? Kurland answers with sixty-nine transfixing photographs. For this exhibition, which marks the twentieth anniversary of the series (though a few of the works date slightly earlier), a full set of the vintage color prints, each eleven by fourteen inches, photo-album sized, encircles the gallery in a line. 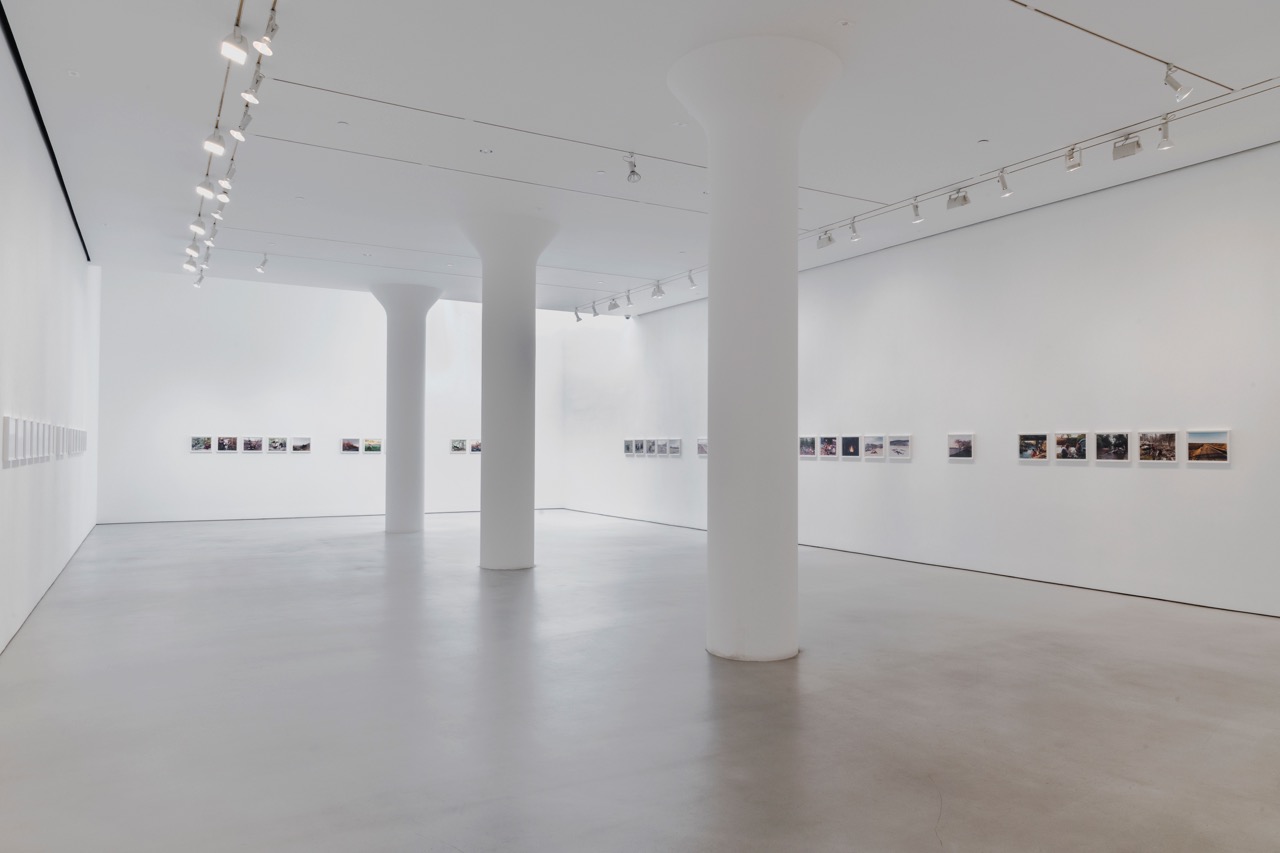 The Runaways’ taunting lead singer Cherie Currie—whose glam-punk persona, fucked-up real life, and tragic role opposite Jodie Foster in the white-suburban teen drama Foxes (1980) made her the quintessential, last-days-of-disco bad girl—particularly captivates the artist. In a moving essay (written this year and included in the show’s accompanying, limited-edition monograph), Kurland describes the intimacy of her Girl Pictures and how she understood her place in the midst of these staged, outdoor tableaux, via the fantasy premise of a picnic in the country with Currie. “I would show her my favorite tree to climb, braid her hair by a gently flowing river, and read aloud to her, my gaze occasionally drifting toward the horizon while she lazily plucked a blade of grass and tasted its sweet greenness. All the power chords we would ever need lay within reach, latent, coiled in wait.”

None of these images feature rock stars, though. For her initial experiments Kurland shot around Manhattan with a boyfriend’s fifteen-year-old daughter as her model, then graduated to total strangers. She would cruise for collaborators near high schools, she recalls, then drive a carload of girls to “a place where the landscape opens up—a place to plant a garden, build a home, picture a world.” 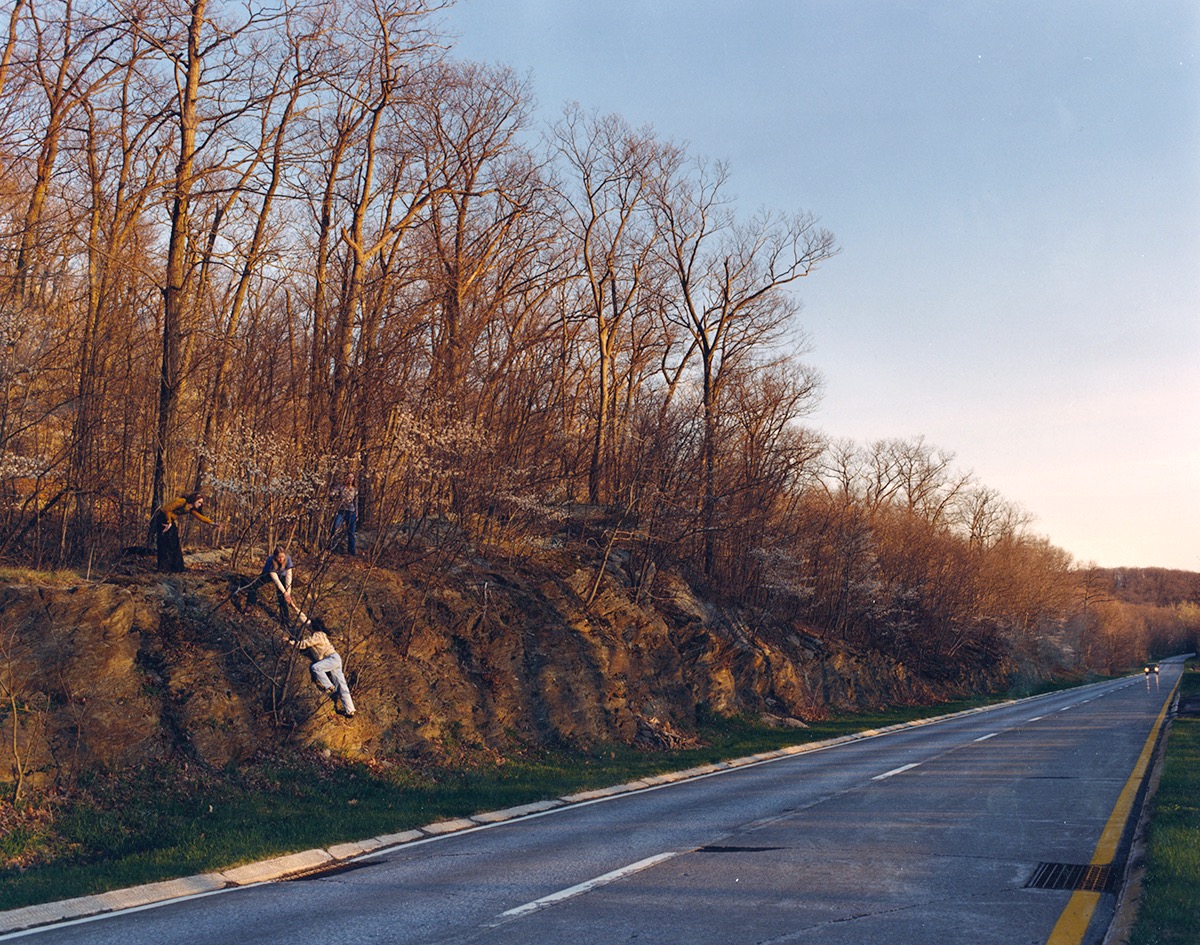 Meadows, creeks, swamps, desert vistas, and a burning forest are among the dramatic backdrops Kurland found as she began road-tripping across the country in 1997, following the westward path of brutal American expansion, enlisting local girls to stake their own claim, to transpose new adventures on the landscape. In these images, nature is not often pristine—fences, overpasses, and power lines underscore the runaways’ dangerous proximity to what they’ve fled. In The Sirens (1999) we see, from a distance, a small figure pulling her comrade up a steep, rocky slope running alongside a desolate road, so they might disappear together into a forbidding expanse of rust-colored winter woods. Approaching headlights, though far off, lend a sense of scrambling urgency to their efforts. Gibraltar (2000) is another stunning wide shot: two girls, on a wild coast somewhere, climb a chain-link fence that abuts a formidable rock. One has tossed her backpack over the fence and her companion pushes her up. Pale sea fades into white sky behind them. 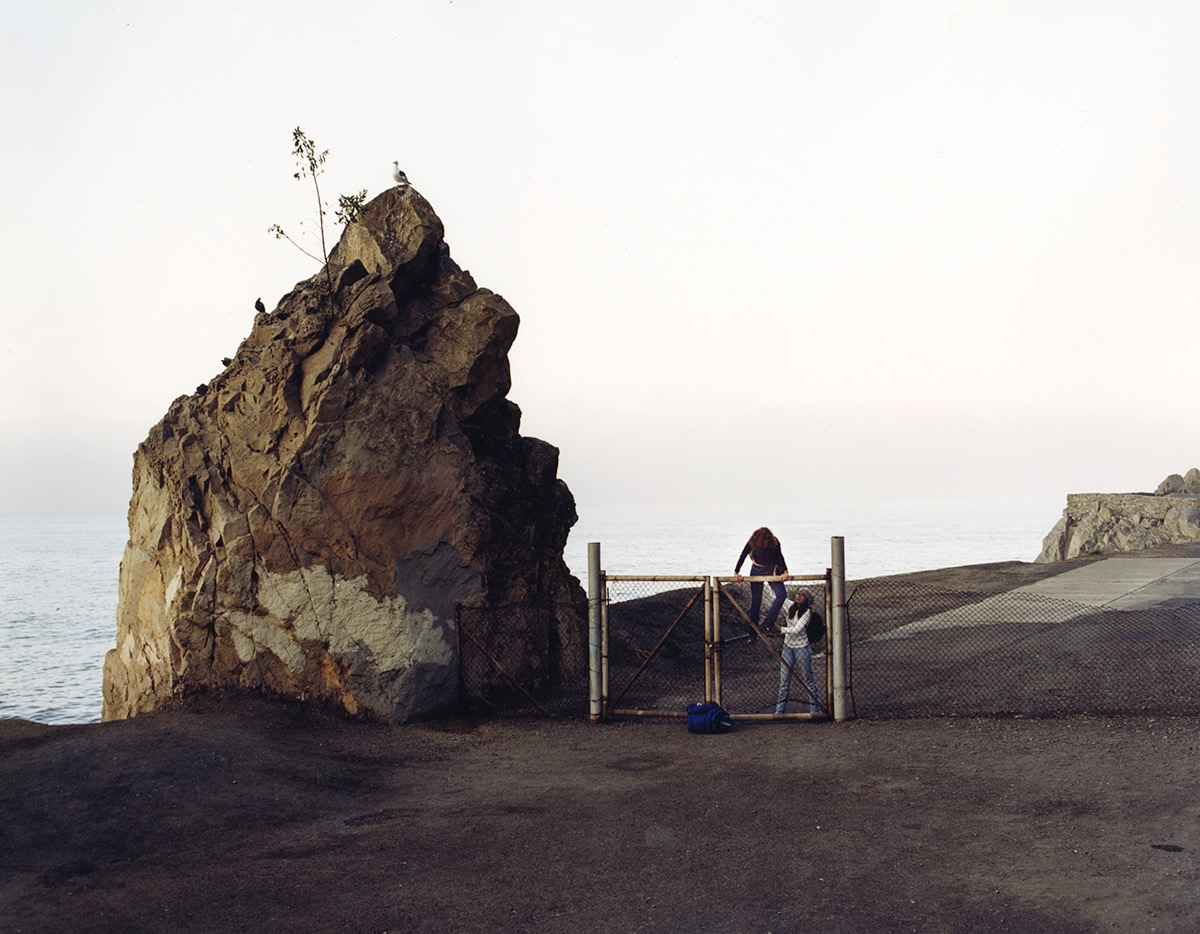 These compositions serve as elegant foils to closer views of the teens, in which the intensity of their interactions and the complexity of their communal activities are rendered in detail. Mysterious politics are in play in Boy Torture: Two Headed Monster (1999), one of a handful of works in which the enemy appears. He’s been dragged, on a chilly day, through tall dry grass to be pinned down on muddy ground by two girls. The apparent leader holds his arms down to spit in his face. It’s an action shot—a blob of saliva hangs from her lips, as another girl, perhaps a little younger, watches intently over her shoulder. A third observes from some remove, leaning back in a low-hanging branch, long hair and a dark overcoat contributing to her witchy mystique. Maybe she’s the leader, directing the action. 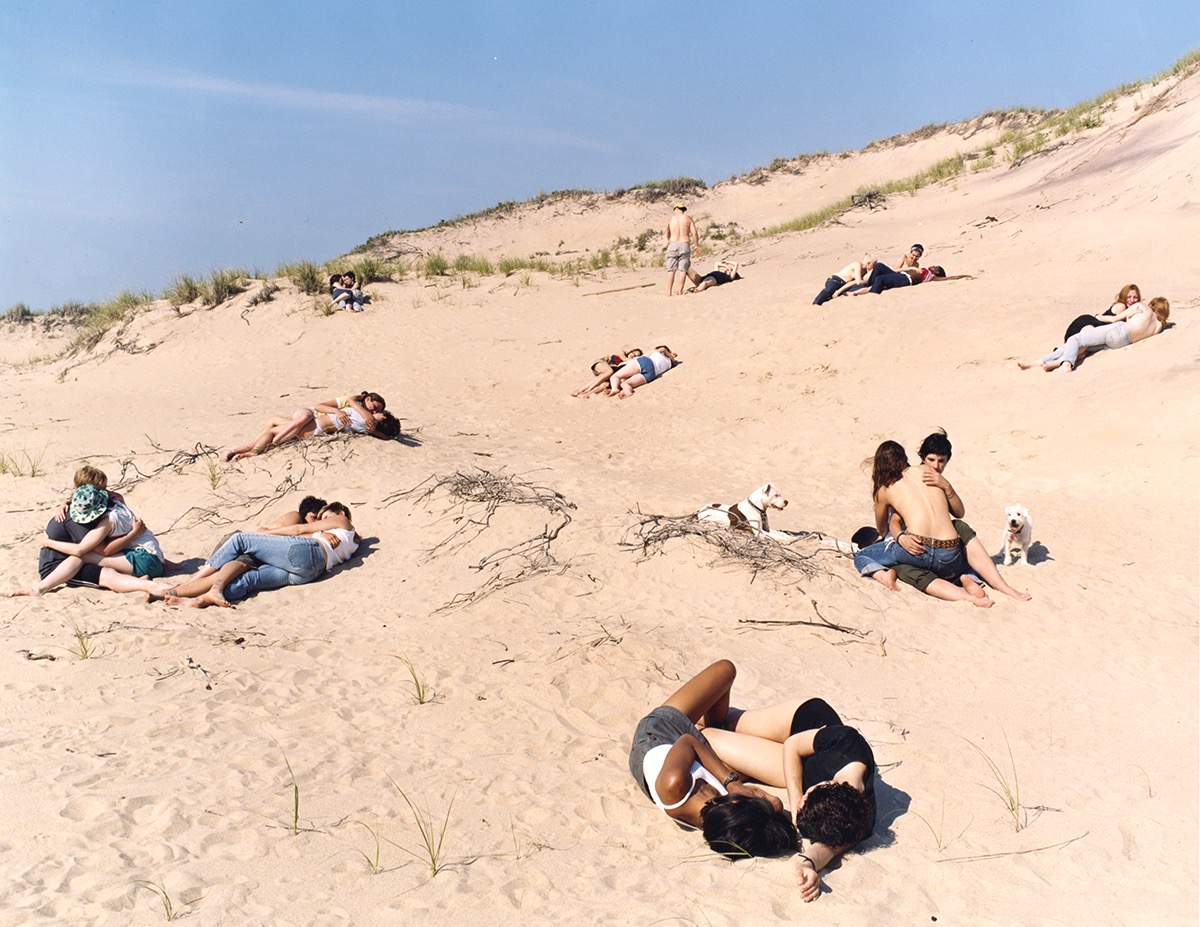 In other scenes, intrepid young delinquents have set up makeshift camps with tarps tied to trees, built fires, gone for swims, or set out on reconnaissance missions, dressed in tomboy uniforms of baggy pants or tattered overalls, dark hoodies, old hunting jackets, and army surplus garb. Or they mess around: Girls in Sand (2002) shows some twenty of them at the beach, paired off in states of semi-undress on a bright dune. In Poison Ivy (1999), young lovers (maybe) hide together in the lush reeds of a marsh, plucking black leeches from their bodies with focused, melancholic eroticism; and another couple occupies the foreground of the wryly titled Feminine Hygiene (2000). One girl seems to inspect the other’s ear as they as they huddle languidly beside the sun-dappled water of a drainage ditch. 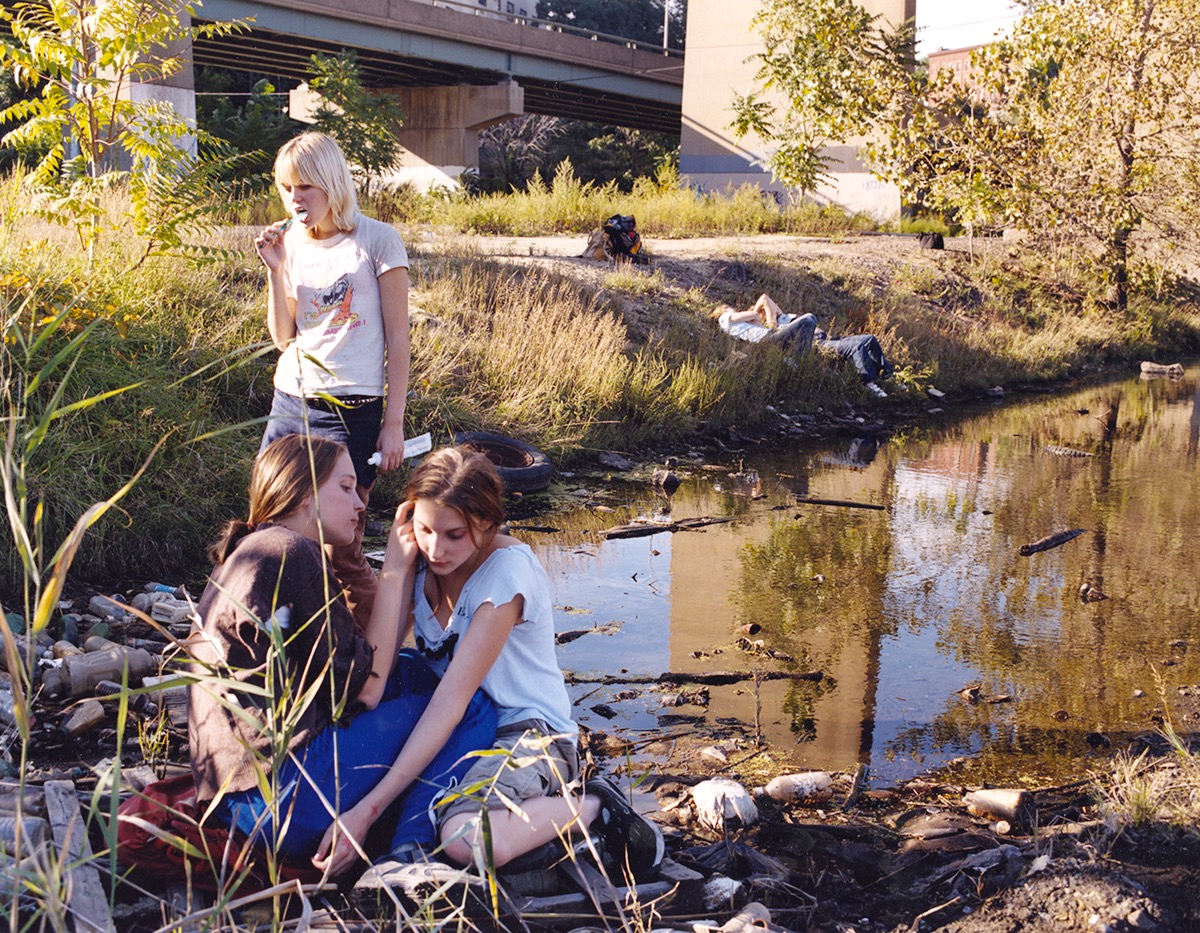 Currie appears behind them—or rather, her doppelganger, circa 1975, does. Slender and slouchy, she stands brushing her teeth, wearing low-slung denim jeans and a faded t-shirt, a studded belt peeking out from beneath its hem. She’s an excruciatingly cool figure, invoking the menacing stance of the Runaways, and the protagonist of their anthem “Cherry Bomb” (Can’t stay at home, can’t stay at school . . .). She glowers beneath the thick fringe of her bleached, white-blonde shag—the Bowie-inspired cut the teenage singer gave herself after she was raped by her twin sister’s boyfriend.

But Kurland doesn’t confront the real reasons girls run away, or describe what their lives are like when they do. Her photos instead depict a world of American countermyth, one populated by heroes with names like Sandy, Jackie, Lita, Joan, or Cherie instead of Huck and Holden. As a woman living out of her car, perverting the verité tradition of road-trip photography’s male canon day by day, she had one foot planted in that romantic realm. “Behind the camera, I was also somehow in front of it—one of them, a girl made strong by other girls,” she reflects. Her pictures of them appear as glorious establishing shots or pivotal moments in an epic of overlapping plotlines. And taken all together—a rare opportunity that this graceful installation affords—they offer a vivid daydream of widespread revolt and cooperation among girls, a vision as poignant and tantalizing as ever.