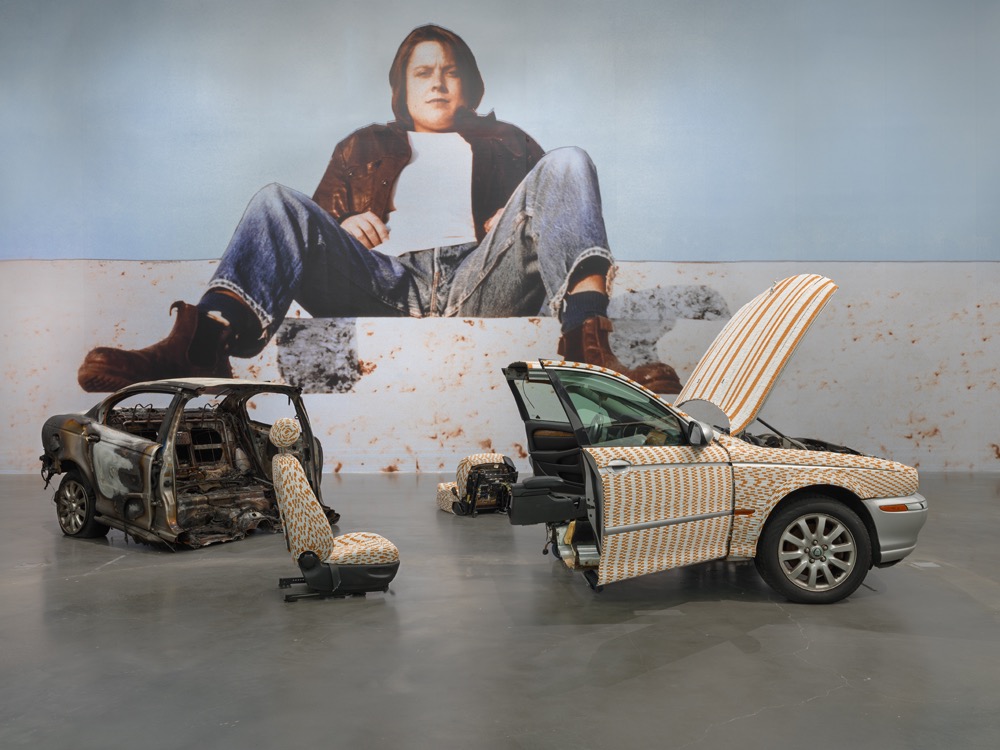 When New Museum director Lisa Phillips addressed the small crowd—women, mostly—gathered in the lobby last week for the press preview of Sarah Lucas’s retrospective Au Naturel, she stated, wearily but proudly, leaving the odious particulars of the larger moment unspoken, that we needed the British artist now more than ever. While the phrase has become well-worn in the Trump era, it felt, that morning, neither clichéd or vague, but rather weirdly precise—as if Phillips meant that we needed Lucas now, Tuesday at 10:30 a.m., even more than we needed her the afternoon before.

Monday, of course, many of us had worn black and stood in the street at 1 p.m. in solidarity with Christine Blasey Ford, sickened by new details of Brett Kavanaugh’s salad days, such as Deborah Ramirez’s recollection of a drinking game, freshman year in a Yale dorm, when he allegedly dropped his pants and pushed his dick in her face to the laughter of his friends. Then, by nightfall, we got news of the Georgetown Prep yearbook where Renate Schroeder Dolphin, who’d signed a public letter vouching for the federal judge’s good character a little more than a week earlier, was named as his football team’s sexual mascot, becoming the freshly humiliated object of decades-old ridicule. So, while Phillips made her remarks, I glanced up, as if to the heavens, at the galleries above—three floors packed with Lucas’s swaggering self-portraits; cock-and-ball beer-can statuettes; sculptures of gnarled penis-branches; concrete phalli resting on hunks of crushed cars; and a massive wall densely streaked with the sticky, sunny drips of a thousand smashed eggs—hoping for a shot in the arm, some sanity-preserving evidence that a dirty joke can actually be funny. 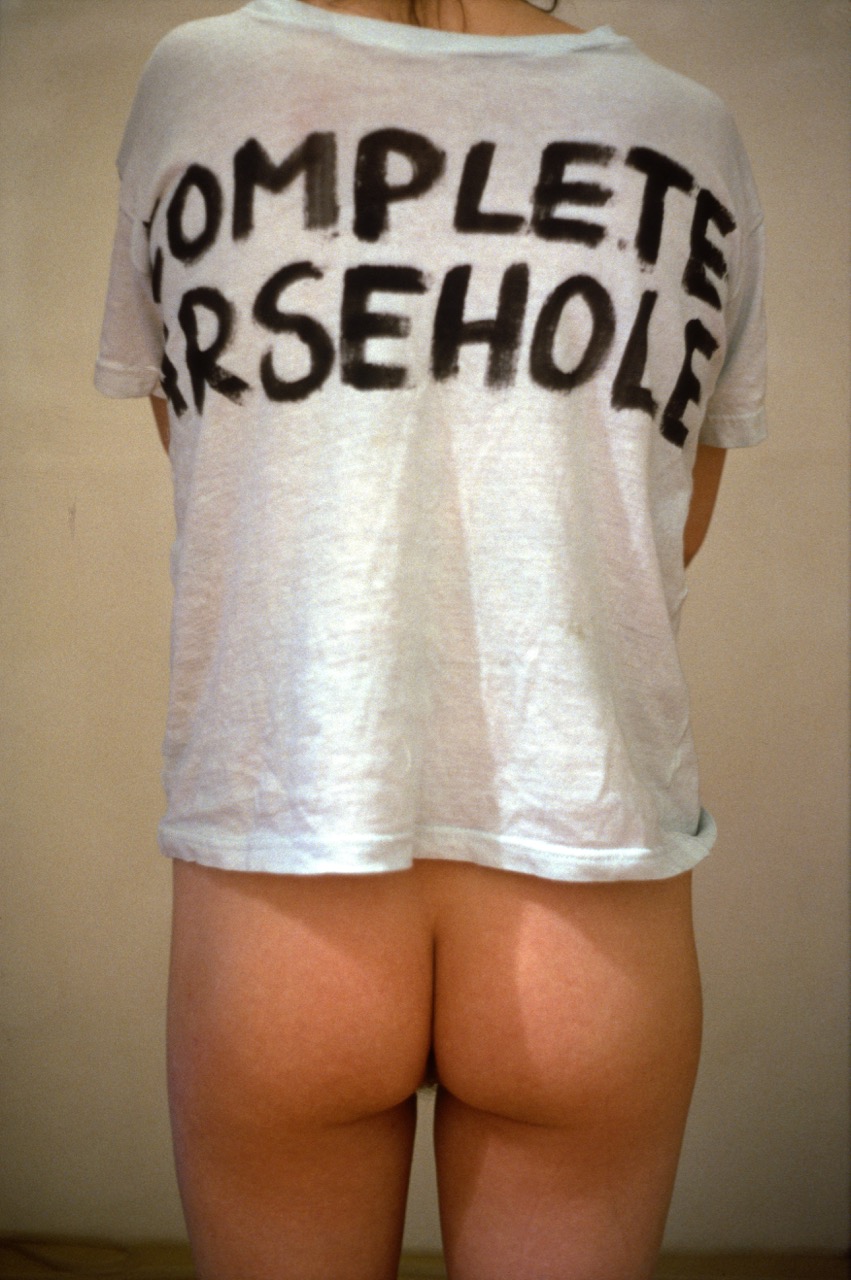 This show, the first major US survey of Lucas’s work, doesn’t disappoint. Curators Massimiliano Gioni and Margot Norton present a smooth and scenic tour of a wild career, in which ample space is granted to important series without isolating them, and helpful context is provided with none of the impenetrable wall labels the museum sometimes indulges in. Though Lucas came up in the heady and internationally hyped YBA scene that started in late 1980s, this show really begins a few years later, as her special talent for the satirical representation of gender through symbolic and surrogate genitals became clear; as she initiated the signature bawdy motifs and corresponding style that distinguished her from her peers, including fellow “bad girl” Tracey Emin. (Lucas collaborated with Emin on The Shop—the legendary store where, for six months in 1993, they peddled such things as T-shirts emblazoned with I’M SO FUCKY or, most famously, COMPLETE ARSEHOLE.) 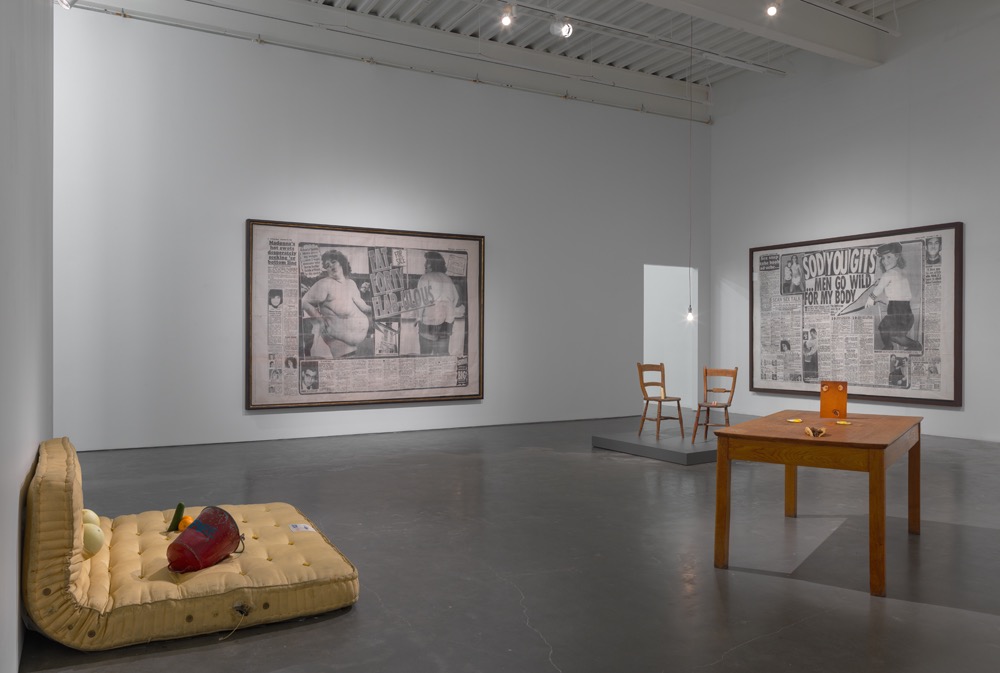 Among the earliest works on view are two from one of her first solo exhibitions, a spare and playfully caustic 1992 installation in an empty West End storefront space. Two Fried Eggs and a Kebab (1992) is composed of a wooden table, crudely sexed female through the arrangement of the food items, laid on top in a lewd triangle; in the crassly distilled double portrait The Old Couple (1991), a pair of chairs become people with the addition of small accessories—a set of false teeth and a wax dildo placed on their respective seats. Though the literalism of the latter element is strikingly incongruent—everything else is a visual pun of a slur—the anatomically rendered dick might be even more pathetic. In the world of Lucas’s art, phallic power is absurd and arbitrary. It’s also up for grabs. 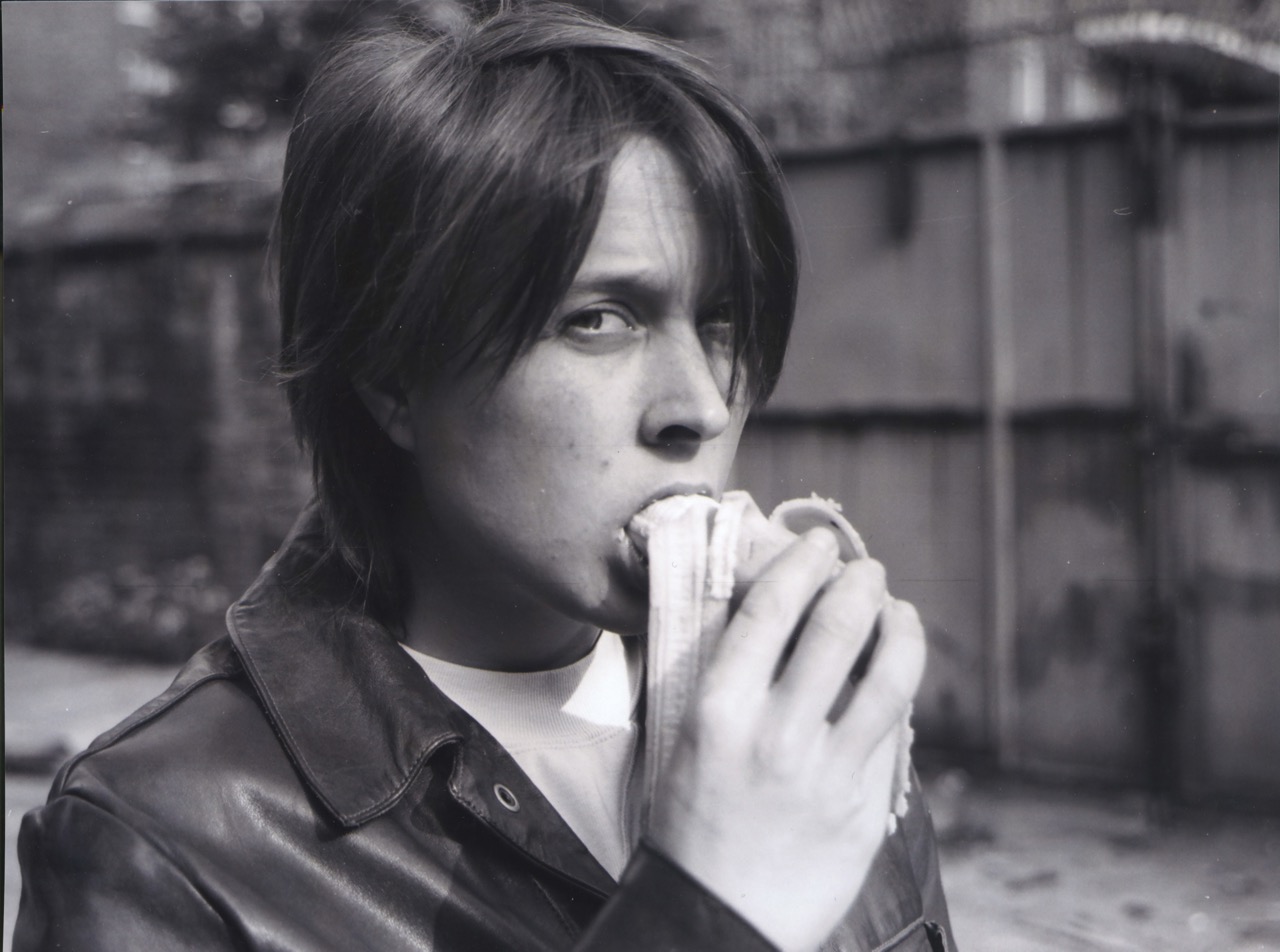 Menacing and androgynous, she eats a banana in her landmark, first self-portrait, shot in 1990 by her then-boyfriend, the painter Gary Hume. In another, from 2000, her body is concealed by the large photo she holds—it’s of a nude man, from waist down, opening an exploding beer in front of his crotch. Self-Portrait with Fried Eggs (1996) has her leaning back in an armchair, manspreading defiantly as she wears the eggs like pasties over a T-shirt. The commanding photographs of the artist stand as strong-jawed, steely-eyed foils to the slapdash readymades and crafty small-scale one-offs of her early career. As the show progresses, and her works appear more refined and sturdier, churned out with bona fide production values, they offer a window into her practice. Shown as handsome prints or wallpaper backdrops in some of the more spectacular installations, they evoke the behind-the-scenes happy accidents, lightning bolts of inspiration, and collaborative ethos key to her sensibility. 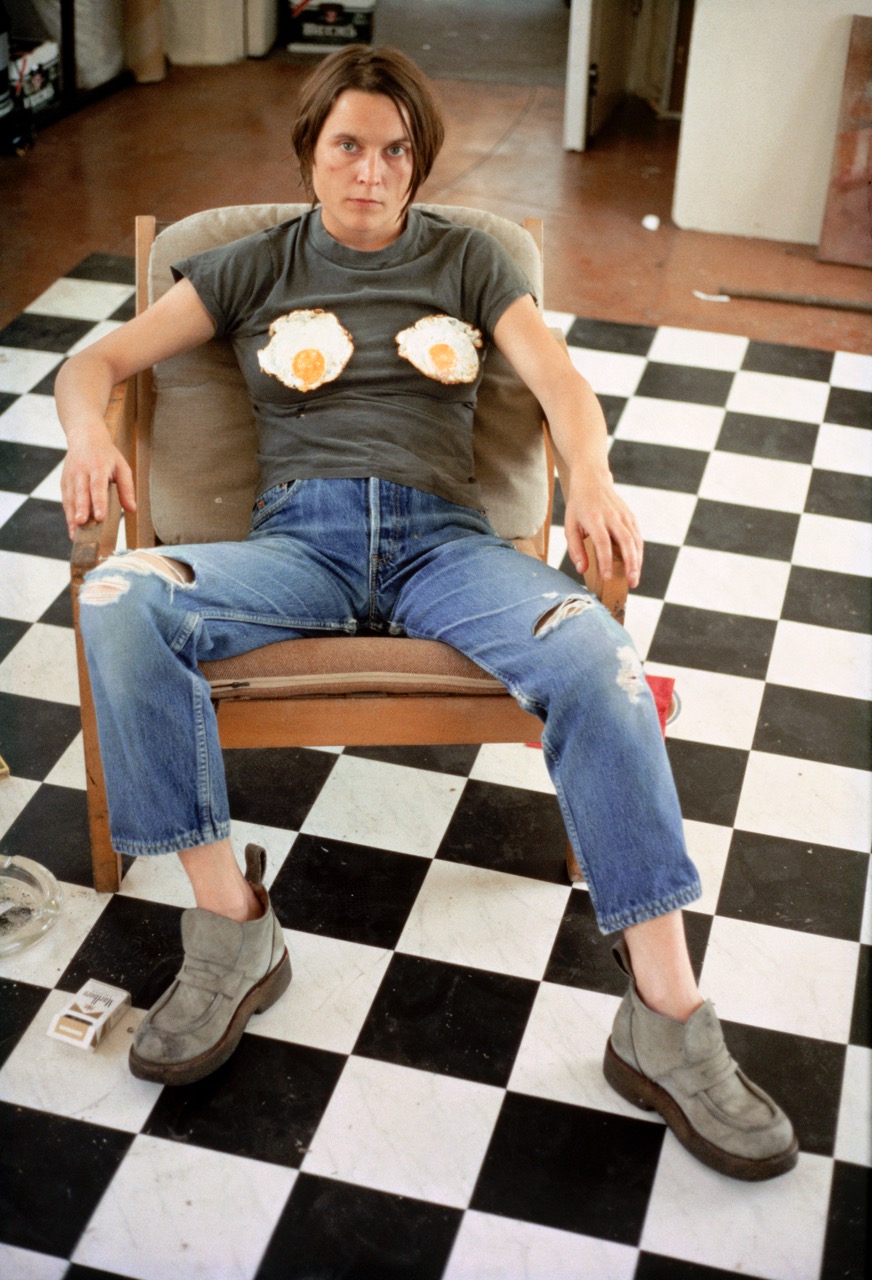 That male intimates have historically released the shutter for these self-portraits seems worth mentioning because, while you could say that the post-Freudian artist exhaustively tests the queer adage that anything can be a dick, it’s also true that a dose of heterosexual goodwill animates her underlying critique. Egg Massage (2015) is emblematic of Lucas’s prevailing attitude toward the so-called opposite sex. Made on New Year’s Eve at the home of friends (gallerist Sadie Coles and photographer Juergen Teller), the performance video documents a tongue-in-cheek neo-Pagan ritual, with the artist cracking raw eggs on her limp, acquiescent partner, artist-musician Julian Simmons. With vaguely territorial, barely contained amusement, she slathers him affectionately with goo. One Thousand Eggs: For Women (2017–ongoing)—the aforementioned yellow wall—is the performance’s cathartic counterpart, a sticky monument to ova, action painting, vandalism, and rage. 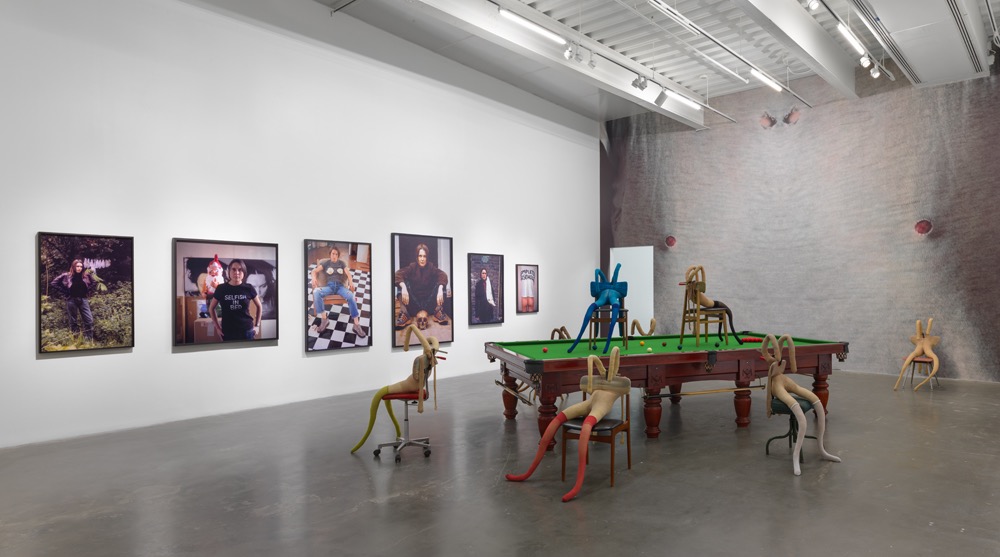 One of the marvels of the survey—and of her boundless oeuvre—is the easy juxtaposition of personable, simply conceived moments such as Massage with more mysterious, aggressive, and unsettling works, of which the restaging of her 1997 show Bunny Gets Snookered is a stand-out. Lucas’s headless bunnies are goofily perverse characters, alien coquettes constructed from stuffed nylon tights, one pair for each of the figures’ splayed legs, another for their droopy cartoon ears. Clamped to office chairs, wearing thigh-high stockings, they pose, slumped, on and around a felt-topped snooker table in a bizarre tableau of sexual peril. Black-and-white photographs on an adjacent wall cast them in another light, recalling both Hans Bellmer’s surrealist photographs of dismembered dolls and images of tabloid prurience—another longstanding interest of the artist’s. 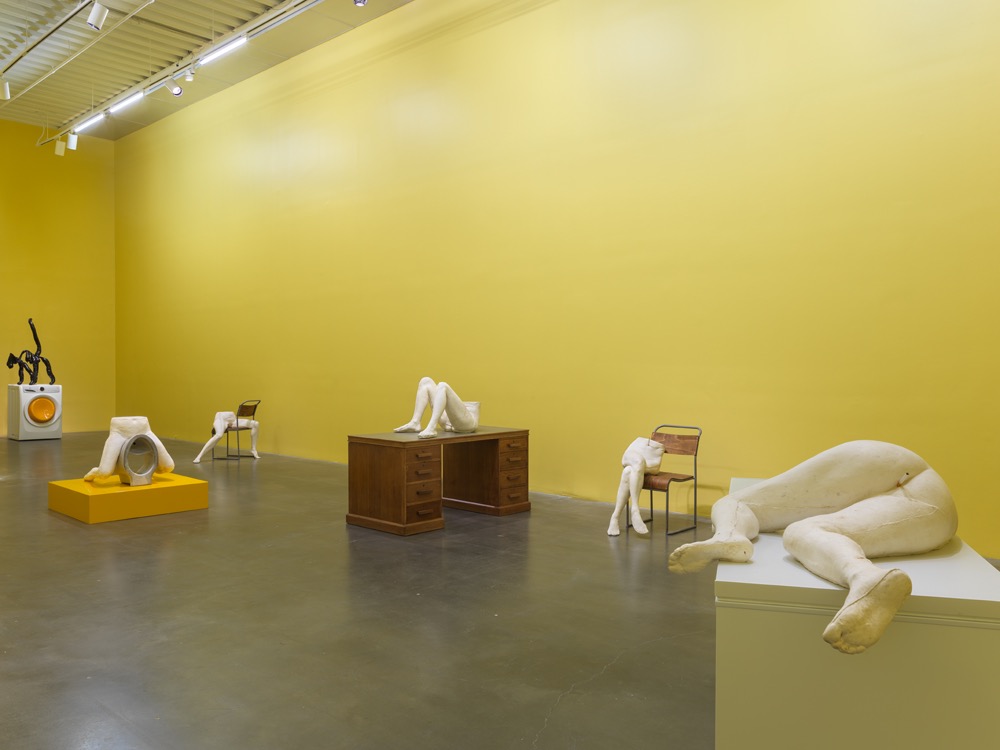 “I always think it’s a bit funny, when you see all the shocking things in the world,” Lucas has said, referencing the historical controversy around her sexually explicit work (specifically, the comical penetration featured in her poetic 2015 plaster cast “Muses” series), “endless women getting tortured and murdered. You think: Why the hell would anybody be shocked by a cigarette in somebody’s bum?” The nonchalant question strikes at the unfair proscriptions on women’s expression, and at the general patriarchal hypocrisy so infuriatingly on display in recent days, as it deftly illustrates her particular strain of cool refusal. There’s a consistent, imperturbable quality to Lucas’s approach that combines alchemically with her profound-slash-juvenile gestures to produce her stunning objects. She offers a model of rebellion that’s steadfast, not concentrated in youth; and her dirty jokes are crafted without malice—though without mercy, either.

Obviously, we don’t need Lucas now like we need a congressional majority or those women yelling in Jeff Flake’s face, but it’s quite something to see three prolific decades of her art assembled together. And even if you can’t really fight a culture war with feminist art, I personally can’t imagine surviving one without it.