Nonfiction
Rape: From Lucretia to #MeToo

A feminist cultural critic explores the language of rape. 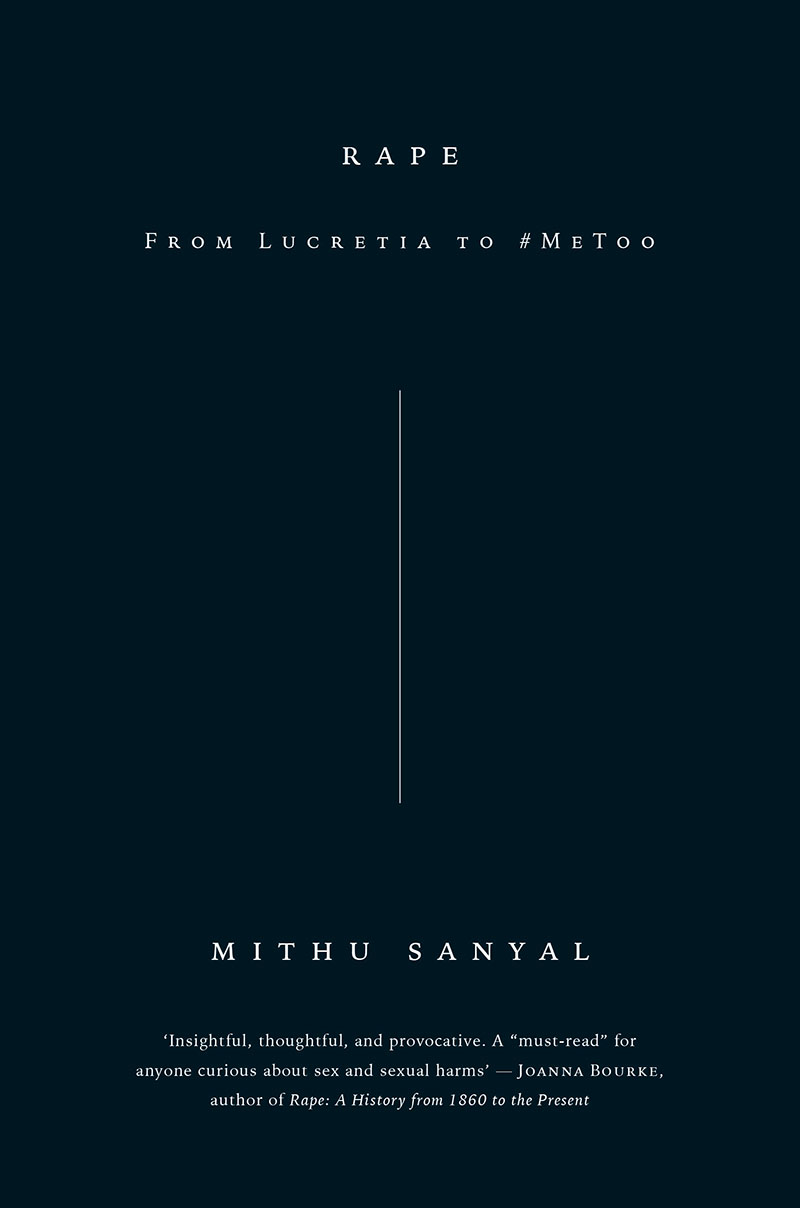 A historian reminded me of rape’s slipperiness. After discussing with him the 1996 afternoon when a stranger forced his way to my vulva, he boomed, “You got raped for real!” The awe with which he imbued “for real” elevated my tale, freeing it from the fictional realm. His seal of approval illustrates a driving conceit of Mithu Sanyal’s four-letter-word of a book: rape, like beauty, is in the eye of its beholders.

In Rape’s introduction, Sanyal writes, “This is a book about what we talk about when we talk about rape.” She adds that her aim is to “start a discussion and open up new ways to speak about rape, prevention, and healing . . .” Thematically divided into six chapters, her ambitious project begins with an attempt at the historiography of rape. It moves on to a patchy appraisal of rape’s relationship to notions of honor and truth. A quick, sometimes sloppy, sketch of trauma and healing follows. Rape’s final chapters zigzag from race to rape culture to free speech to rapeability to consent. The curtain falls with a discussion of the anti-rape slogan du jour: yes means yes.

Sanyal, a feminist cultural critic, doesn’t indulge in the jargon-saturated style popular among certain gender theorists. Instead, her first-person narrative, laced with personal anecdotes and commentary, unfolds in a casual and often biting fashion. Our current storytelling habits pressure those who write about rape to do so in solemn, nearly sacral tones, so it delights me that Sanyal violates this taboo, her acerbic voice emerging from the get-go.

“When I give talks about the topic of this book,” begins Rape, “I am often asked to give what is commonly known as a ‘trigger warning.’ The aim of such warnings is to protect traumatized people from being retraumatized, and I agree that this is important. At the same time, I feel uncomfortable treating people who have been victims of violence as if they’ve lost the ability to read. The title of this book . . . is Rape.” Reading these opening lines felt like a playful smack. Since I enjoy intellectual roughhousing, I picked up my pen and wrote thank you in the margin of the book. Beneath my gratitude, I added lol.

Sanyal catalogues an impressive range of rape-related phenomena, from Rembrandt’s oil portrait of Lucretia preparing to commit suicide to Julian Assange’s seven-year stay inside Ecuador’s embassy in London. All the while, she never abandons her concern for “what we talk about when we talk about rape.” Words, as well as grammar, remain her principal concern.

“Language,” she writes, “plays a pivotal role in the way we assess rape, but also in the way we process it.” She stresses that the “information we get about rape isn’t just information about rape; it’s also about gender, the relationship of the sexes to each other, and even sexuality.” As Sanyal exposes this information, she places it under linguistic scrutiny. An example of the attention she pays to dialect appears after she poses the question, “Is multiculturalism bad for women?” In her response, she touches upon the slur rapefugee, a neologism coined by Europe’s far right to describe refugees’ alleged propensity for rape. In the case of rapefugee, a single word not only communicates information about sex, gender, and sexuality, it also speaks to nationalism, notions of body politic, and xenophobia.

Sanyal’s concern with semantics places her work in the intellectual tradition of Raymond Williams’s Keywords. Williams described this 1976 project as a “record of inquiry into a vocabulary” in use when we say “we just don’t speak the same language.” Sanyal nods in Williams’s direction when she raises this phenomenological flag: “Everybody is against rape, but hardly anybody is against the same thing when they are against rape.” Like woman, rape is an “essentially contested concept.”

Sanyal writes with a stylistic tic, often beginning sentences with the word but, and this quirk is fitting. It indicates a preoccupation with exception, and Rape illustrates, through a flurry of examples, that the word, and its attendant grammar and vocabulary, sparks exceptions to the nth degree. “You may use force,” Ovid advises in Ars amatoria, “women like you to use it; they often wish to give unwillingly what they like to give.” According to these ancient poetics, no spells yes. Sanyal, however, argues that “for much of history, ‘no’ didn’t . . . mean ‘no,’ but simply ‘I am female.’ ”

No spells yes but it also spells female. The doublethink is dizzying.

Because none of us means the same thing when we discuss rape, Rape couldn’t help but take a disappointing turn. While I admire Sanyal’s style, tone, and ambition, her misinterpretations, misrepresentations, and omissions bothered and perplexed me. At times, they left me fuming, so in the tradition of Andrea Dworkin, a seminal anti-rape activist who Rape reduces to a mere bibliographic mention, I will continue to insert more of my personal account into this critique.

Sanyal glosses over the biology of rape trauma, briefly mentioning that, according to Susan Griffin, rape “is an act of violence which, if not followed by beatings or murder, nevertheless always carries with it the threat of death.” Sanyal then dismisses this mortal fear, instead focusing on the “spiritual death” suffered by victims, suggesting that if societies find ways to mitigate this spiritual and cultural wound, rape might become less devastating.

For me, however, rape has always carried the threat of physical annihilation. One rapist used manual strangulation to subjugate me. Another propped a loaded shotgun against his wall. The story with which I led alluded to Tommy Jesse Martinez, a felon whose death sentence was recently commuted by California Governor Gavin Newsom. In the ’90s, a jury found Martinez guilty of the rape, mutilation, and murder of Sophia Torres, a crime for which he prepared by using my body.

Sanyal favorably discusses two preventative and rehabilitative remedies, restorative justice and improvement of sexual literacy, and she uses Thordis Elva and Tom Stranger’s book South of Forgiveness to demonstrate how a victim, Elva, and the boyfriend who raped her, Stranger, came “to terms with the rape and [left] it behind them.” This instance left me shaking my head, and I wondered how restorative justice might be wrought for Torres. Her family testified that Martinez mangled her face so that she no longer looked human. Martinez’s exquisite sexual literacy also seemed to be the very thing that excited him as he attacked me: his grin grew wider in direct proportion to my increased terror and sexualized degradation. While Sanyal stresses that men are “disenfranchised from their emotions and feelings,” I found Martinez to be very emotionally enfranchised. He betrayed no empathy deficits. Instead, he appeared to use empathy as a tool to heighten the sadistic pleasure he felt in dominating a fellow human being.

Some say that the job of the intellectual is to name things. What, though, is the purpose of a name with so many meanings that it becomes meaningless? One purpose of such words is to mask and confuse, and Sanyal not only treats rape as one of these words, she turns rapist into one of these words too, wryly observing that the term might not be apt for describing Stranger since rapist is not his “profession.” I wonder if she thinks of author or public speaker as more appropriate terms for him, and while I have never encountered a professional rapist, I have encountered rapists who behaved as if rape was both their entitlement and vocation, a calling. The man who manually strangled me also threatened to end my life the way Martinez ended Torres’s. He then raped me, and these acts were my punishment for telling him I no longer wanted to date him. If, to name this man, I had to choose between his day-to-day profession, boyfriend, or rapist, the best word would be the last word. Raping has never been a profession, but who needs that when one has a calling?

Myriam Gurba is a writer, artist, and teacher. Her novelistic autobiography Mean was chosen by Library Journal as one of 2017’s best memoirs, and was also a New York Times editors’ choice. She has written for Buzzfeed, TIME, and the Paris Review. She loves dad jokes, caffeine, and cash.