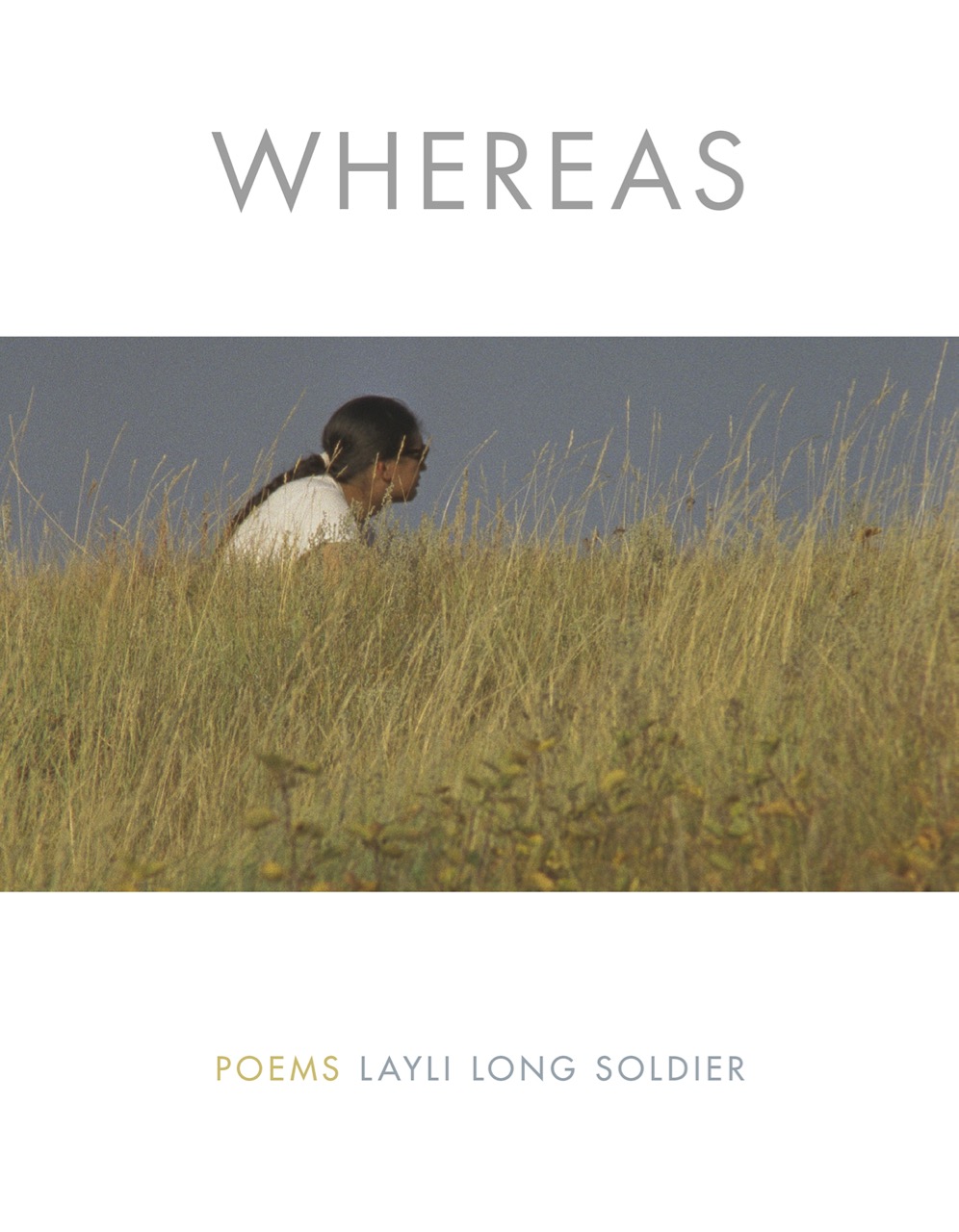 The title of Layli Long Soldier’s Whereas references the 2009 “Apology to the Native Peoples of the United States.” Buried in a $636 billion appropriations bill that funded a troop surge and kept Guantanamo Bay open, the apology typifies the numbing vapidity of state speak. In a series of statements that begin with the word “whereas,” the resolution recasts genocide as incidental and its violence as clinical. Although US officials called it a historic reconciliation, the apology was designed to not change anything. It concludes: “Nothing in this Joint Resolution . . . supports any claim against the United States.”

Whereas is Long Soldier’s first collection of poems. Already the winner of a 2016 Whiting Award, it is burning and tender and urgent. In two sections (“These Being the Concerns” and “Whereas”), the volume traces the intimacy of living that the language of the national apology would bureaucratize. The seventeen spare poems of the first section consider everyday subjects: land, coffee, writing, family. They are poems that listen. They render only what is necessary to summon the immensity of a particular place, of a sentence written in ink on paper, of sitting with your daughter in a car in the world.

“These Being the Concerns” insists that language conducts power in ways that are brutal and alienating. Long Soldier, an Oglala Lakota citizen whose family is from Pine Ridge (a place once called the poorest county in the US), considers the exhausting language of poverty in a poem whose very punctuation (the idiosyncratically spelled out “comma”) also interrupts that discourse:

I wanted to write about waȟpániča a word translated into English as poor comma which means more precisely to be destitute to have nothing of one’s own. But tonight I cannot bring myself to swing a worn hammer at poverty to pound the conditions of that slow frustration.

Unwilling to accept these diminished terms, the poem continues, “So I ask what else is there to hear?” And here, Long Soldier’s sentences come alive. They unmoor themselves from the political deficiency that “poverty” implies and incite a sociality of their own: “A comma instructs me to divide a sentence. To pause. The comma orders a sequence of elements the comma is caesura itself. The comma interrupts me with, quiet.” The poem opens a space of exchange between the speaker and her words in order to hear the life that the discourse of poverty is meant to drown out.

The second half of Whereas addresses the national apology directly. In twenty poems that begin with the word “whereas,” Long Soldier studies sentences like these two, from the national apology, that reduce colonial violence to agentless statements of historical record: “Whereas Native Peoples and non-Native settlers engaged in numerous armed conflicts in which unfortunately, both took innocent lives . . .”; “Whereas the Federal Government violated many of the treaties ratified by Congress and other diplomatic agreements with Indian tribes.”

The apology asserts agreed-upon facts, but does not say who agrees or if the facts are facts at all. It does not indicate that the US has violated every treaty it has made with tribes, or in whose interest it is to rename genocide “armed conflict.” And because the apology includes a disclaimer that guarantees that nothing changes, it formalizes a political suspension—a condition Long Soldier describes: “Whereas I have spent my life in unholding.”

Although “whereas” is a conjunction, she asserts, “I have learned to exist…[w]ithout the slightest conjunctions to connect me.” Ultimately it is this state of suspension that the volume as a whole animates. It lingers in unholding: in histories that cannot be held or reconciled by the US. And it is here that Whereas roots its theory of the anticoloniality of Native poetry.

For instance, a poem titled “38” argues that language is never disconnected from survival. Named for the thirty-eight Dakota warriors executed by President Lincoln for demanding treaty-guaranteed rations, “38” is bare and searing, written in single sentences set apart by a line. The poem references one state official, Andrew Myrick, who quipped of starving Dakota families, “If they are hungry, let them eat grass”:

When settlers and traders were killed during the Sioux Uprising, one of the first to be executed by the Dakota was Andrew Myrick.

When Myrick’s body was found,

his mouth was stuffed with grass.

I am inclined to call this act by the Dakota warriors a poem.

Language, in Whereas, is always attached to more than power. It is material, as living as grass. And the volume never flinches at the sheer stakes of this. In a poem about a speaker teaching her daughter Lakota, the stakes are existential:

Whereas her birth signaled the responsibility as mother to teach what it is to be Lakota, therein the question: what did I know about being Lakota? Signaled panic, blood rush my embarrassment. What did I know of our language but pieces? Would I teach her to be pieces.

US assimilation polices designed to eliminate Native languages have left some of those languages in pieces. Pieces, this poem worries, are the whole of what can be passed forward. But the poem’s speaker refuses this and watches her daughter refuse it too: “Today she stood sunlight on her shoulders lean and straight to share a song in Diné, her father’s language. To sing she motions simultaneously with her hands I watch her be in multiple musics. At a ceremony.”

The poem argues that language may not be singular or total, but is never only pieces. It insists, “speaking, itself, is defiance”—defiance of the mandate to disappear, to be silent. More than a declaration, this is the volume’s methodology, where defiance is also a practice of care.

Whereas dismantles the implication that Native people need to reconcile themselves to the desires or regrets of the US. Native life is “not dependent never has been upon this President.” Like the water protectors who stood in defiance of the Dakota Access Pipeline, refusal in Whereas is generative, an active remembering that “the people themselves are healing this land its waters” and that “they act upon this right without apology.”

Matt Hooley is a visiting assistant professor in the Consortium of Studies in Race, Colonialism, and Diaspora at Tufts University. He writes about Indigenous literary and visual arts modernisms, US colonialism, and the environment. He received a PhD in English and Native Studies from the University of Wisconsin-Madison and is working on a book project titled Ordinary Empire: Native Modernism and the Ecologies of Settlement.