Don’t bite the hand that feeds you: the artist’s retrospective delivers complicity in place of critique. 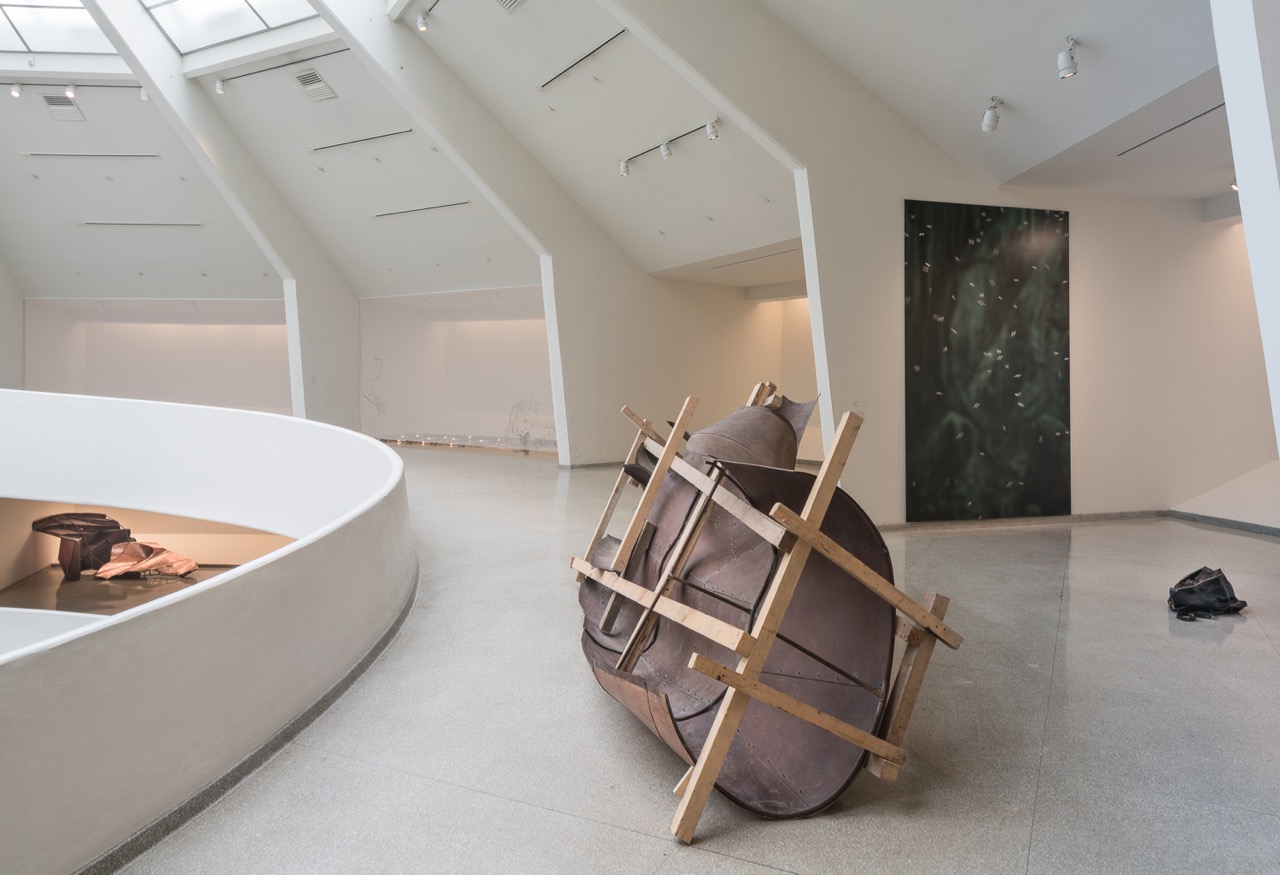 Danh Vo is billed as an artist invested in the dissection of grand subjects and complex systems—from colonialism to Catholicism to the knotty intersections of personal and historical narratives. He chiefly addresses these via found (or re-made) objects: through the acquisition and collection of items of both personal and historical interest and their subsequent installation in what might be described as essays in object form.

Both Vo’s process and mode of presentation would seem to land him squarely in the lineage of conceptual art, a tradition, originating with Marcel Duchamp’s readymade, that essentially recast art’s raison d’être. In lieu of creating beautiful pictures, Duchamp bought mass-produced commodities (most famously a urinal) and placed them in a gallery setting. Art became a spur for critical reflection (often through the juxtaposition of the object and its new, discordant context). One of conceptualism’s favored targets has always been the role that galleries and museums play in conferring art’s value. Vo’s oeuvre, alas, falls squarely into a contemporary genre we might call conceptually art—work that hypothetically embraces art’s critical function while always deferring to the hand that feeds it. 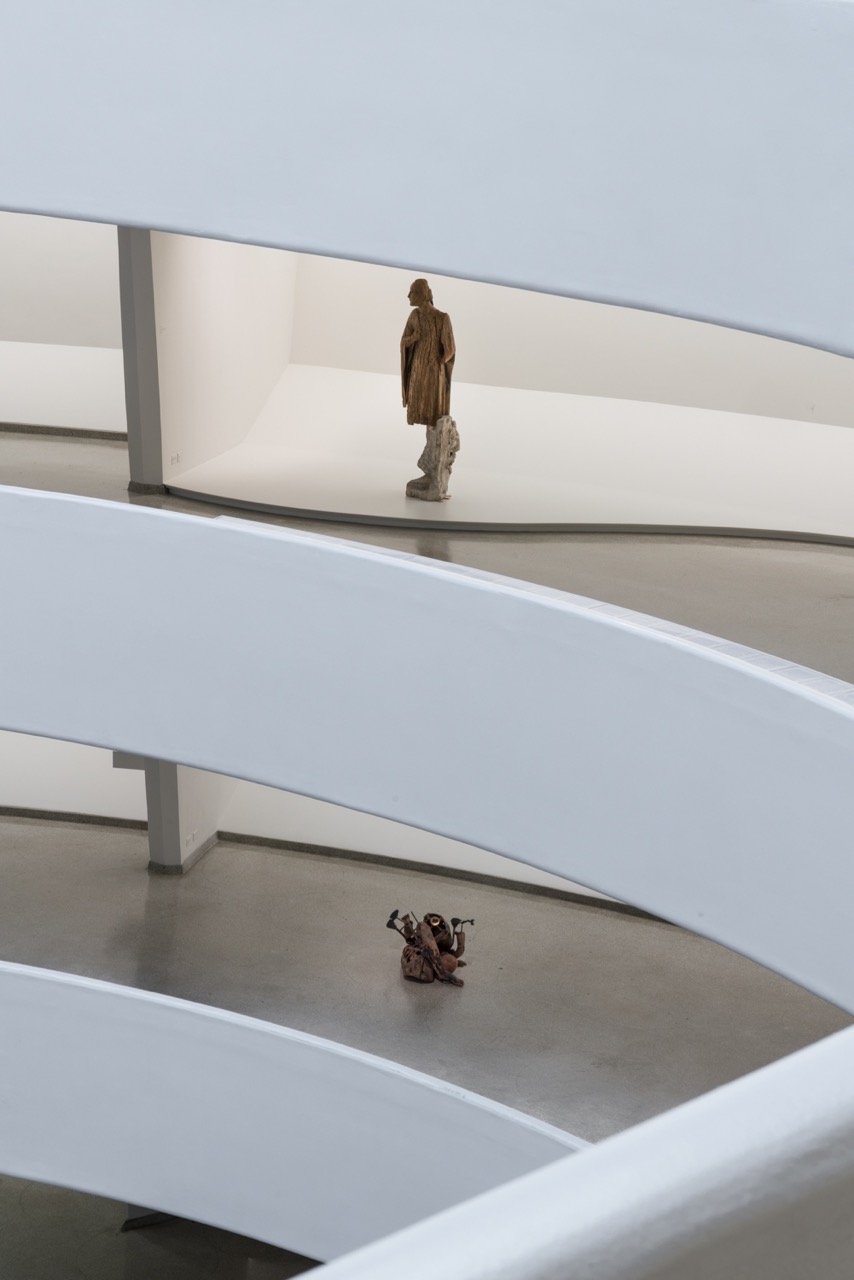 For this mid-career retrospective, the Guggenheim’s long and winding interior ramp is strewn with over one hundred of Vo’s works, all made since 2003. A number of these take on the ugly history of America’s war in Vietnam, the country where Vo was born. In 1979, at the age of four, he and his family made a harrowing escape from their home, landing as refugees in Denmark; Vo grew up just outside Copenhagen, attending the Royal Academy of Fine Arts there before enrolling at the Städelschule in Frankfurt, Germany. He now divides his time between Berlin and Mexico City. “I don’t really believe in my own story,” he said in a 2009 interview with Mousse Magazine. “It weaves in and out of other people’s private stories of local history and geopolitical history. I see myself, like any other person, as a container that has inherited these infinite traces of history without inheriting any direction.” In other words: don’t read his personal background too deeply within his artworks, for other threads carry equal weight. 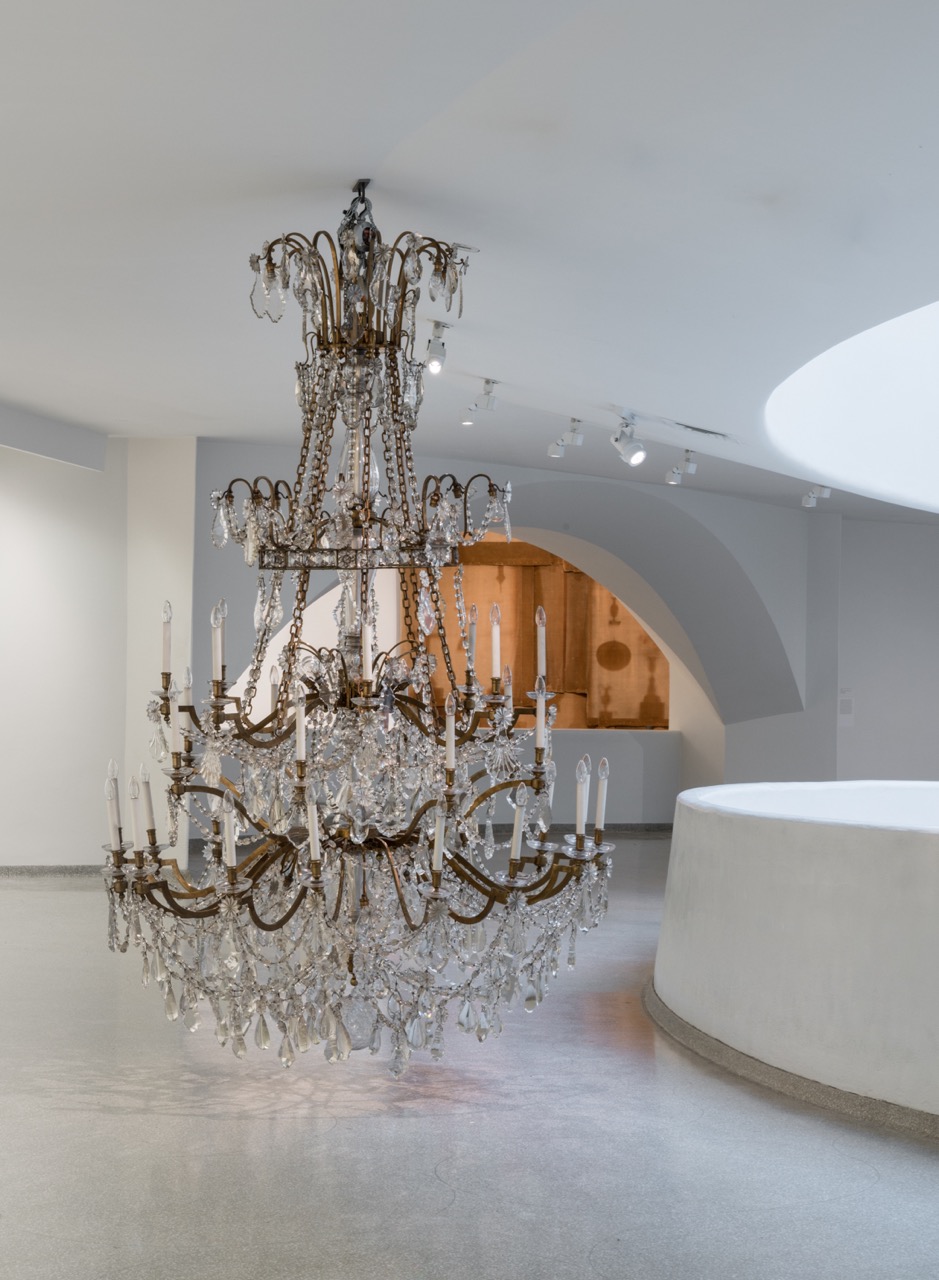 One of the most striking objects on view is a chandelier that originally hung at the Hôtel Majestic over the table where the Paris Peace Accords were signed, which brought the official end of the Vietnam War. It’s a gorgeous, glittering thing, to be sure, but it holds no added charge as part of an art exhibition. Nearby are fourteen letters from the office of Henry Kissinger to the New York Post’s then-theater critic, Leonard Lyons, most of which are thank-you notes for arranging tickets to see Broadway shows. Although it isn’t heartwarming to read Kissinger regretfully declining seats at the ballet due to what he describes as “contemplation of Cambodia,” it isn’t surprising. Neither does it complicate what we know about Kissinger’s character. A lack of intervention on the part of the artist means that these objects remain in the realm of reminder, or souvenir. Vo does literally deconstruct another chandelier as an artwork, laying all the pieces out neatly on the museum floor as one would the bones of an unearthed skeleton, but this move isn’t enough to give it any real interest. It lies there: historical object as dead weight.

The exhibition relies very heavily (as it must) on didactic texts to explain to us why and how the stuff we’re looking at isn’t merely what it seems. Is this just a birdcage? Why no, it’s a bamboo cage for lovebirds that Vo bought in Guangzhou, China, made by artisans practicing one of the few local crafts remaining after the Cultural Revolution. Is this just another Smith Corona typewriter? Why no, it’s the typewriter on which the Unabomber, Ted Kaczynski, wrote his manifesto “Industrial Society and Its Future.” While these are items of appreciable cultural interest, history doesn’t in fact infuse an object with resonance or meaning.

There are a few things in the show worth a moment or two of contemplation. For one: the faded velvet drapes that hang together as Christmas (Rome), 2012 (of 2013) once covered the walls of the Vatican Museum as backdrops for its collection. Discolored by light over time, the cloths performed almost as film negatives, bearing the imprinted silhouettes of the crucifixes, candlesticks, small icons, and other religious objects once on display—Vo’s winsome metaphor, it seems, for the vanishing power of Catholicism, at least in his own life. (He was raised in the faith.)

Another: the wooden cross constructed and painted by Vo’s father to mark the grave of his own mother, the artist’s grandmother, until her headstone was ready to be placed. The artist titled it Grave Marker for Maria Ngô Thį Hą (2008), thereby dubbing it an “art object.” (The piece resides in the EFG Art Collection, owned by a private Swiss banking firm that is also a great supporter of the Peggy Guggenheim Collection in Venice.) The gesture of placing his father’s monument in these particular hands guarantees that his grandmother’s memory will now be preserved, exhibited, circulated—for better and for worse—as part of an art collection, the value of this sign of familial grief now to be assessed forever more by the art market. 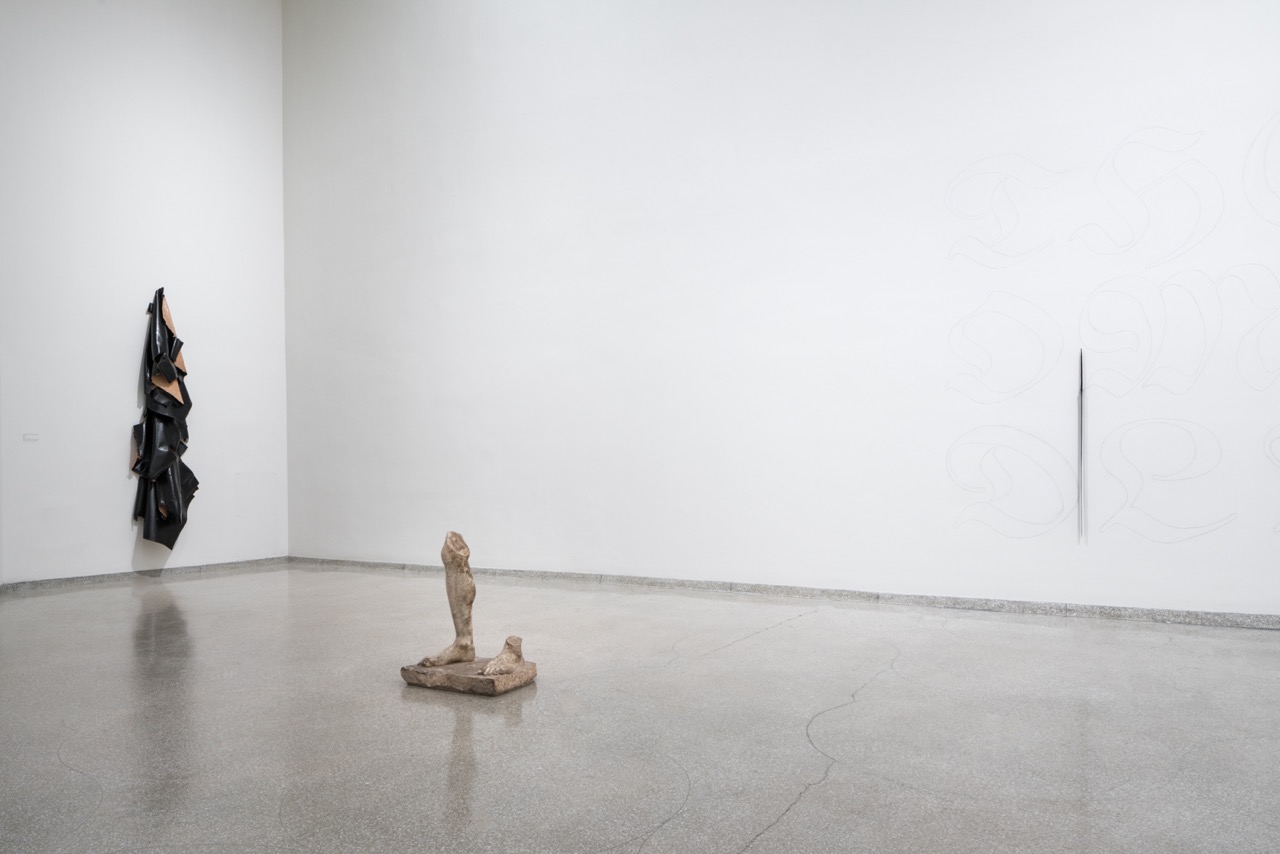 I would like to understand this as a critical gesture—the artist calling attention to the creepier connective tissues between art and capital with a supercharged readymade in the subversive spirit of Duchamp’s urinal. Yet Vo’s practice appears far too complicit with market forces to generate the necessary friction. His work fetches large sums of money. He’s represented by blue-chip gallerist Marian Goodman. For the exhibition in honor of his Hugo Boss award in 2012, Vo purchased the estate of painter Martin Wong, and displayed almost four thousand of the artist’s collectibles and other tchotchkes as an installation titled I M U U R 2 (not on view). Wong died of AIDS in 1999 at the age of fifty-three. Though beloved by many, his career achievements were far humbler than Vo’s. While some saw Vo’s gesture as an act of recovery, of selfless generosity, it was undeniably unseemly, parasitic for the way it cashed in on the life of another artist, transforming Wong’s personal effects into an art piece. (Note that I M U U R 2 was purchased by the Walker Art Center for its collection in 2014.)

Knowing this, and looking over Vo’s corpus at the Guggenheim, it is difficult to avoid seeing the essential spirit of his “art” as little more than good old-fashioned purchase power. Vo researches, shops, collects, displays, and narrates in the same way that a collector or a curator might research, shop, collect, display, narrate. It’s a clever gambit to mirror the forces that support and nourish a profitable, award-winning career. I would like to understand this mirroring of power as a critical gesture, too, but to use the obvious metaphor, I’m not buying it. I regretfully concede, however, that this exhibition is proof that herein lies his cultural capital.

Jennifer Krasinski is a senior editor at Artforum.