Visual Art
The Conditions of Being Art

Legendary gallerists Pat Hearn and Colin de Land are the subject of an expansive new show. 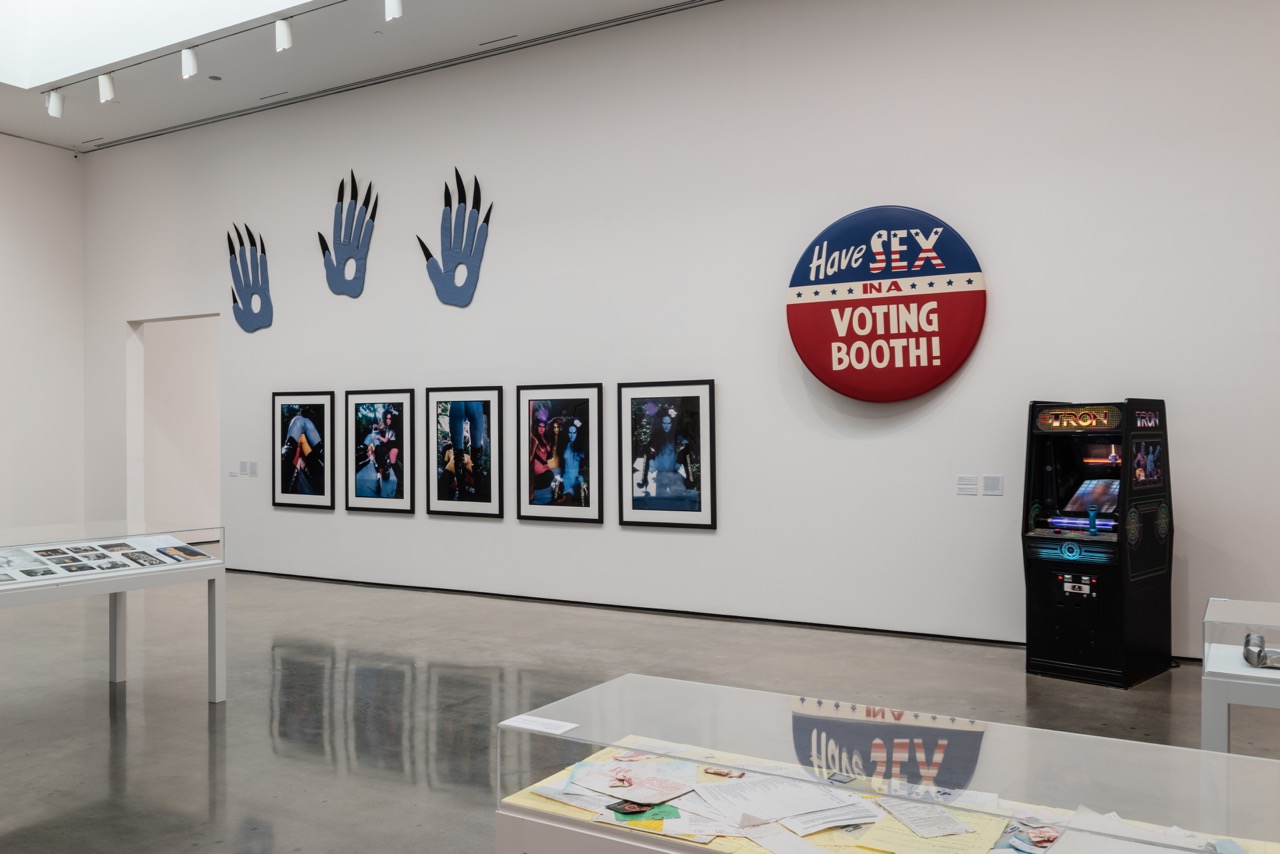 “It’s a beautiful show, isn’t it,” a tall, prim gallery attendant opines in Andrea Fraser’s 1991 video May I Help You?. Her tone is more coaxing than questioning, as if to lead a witness. As she continues, her assurance shifts and falters over the course of a compelling monologue tinged by turns with condescension and fragility, bravura and defensiveness, and betraying her (our) anxieties about the relationship between class and access to aesthetic taste. First performed and recorded at Colin de Land’s conceptually innovative and ambivalently commercial gallery American Fine Arts, Co. (AFA), Fraser’s signature work is among those by over forty artists featured in the aptly titled The Conditions of Being Art: Pat Hearn Gallery and American Fine Arts, Co. (1983–2004), an exhibition exploring the joint legacy of the influential dealers and life partners, Pat Hearn (1955–2000) and Colin de Land (1955–2003), who began their careers in New York’s East Village before migrating to lower SoHo, and the then-still-fringe neighborhood of Chelsea. 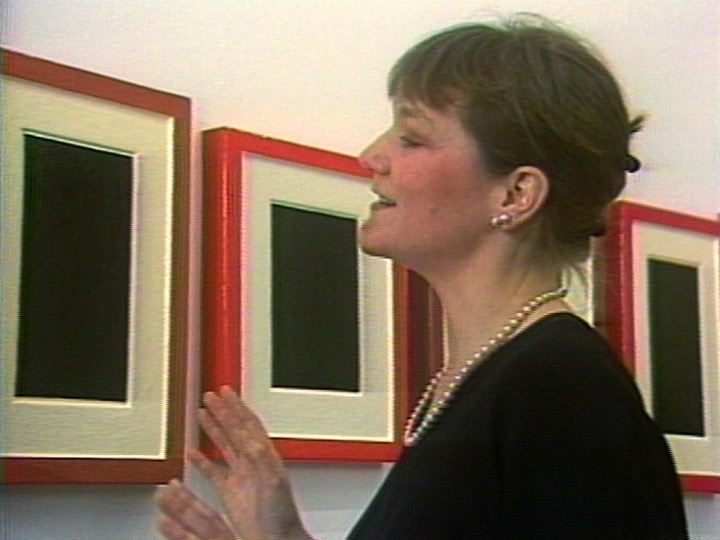 Andrea Fraser in cooperation with Allan McCollum, May I Help You?, 1991. Performance, installation, and single channel video. Video still. Image courtesy the artist.

This sprawling yet attentively considered show takes up eighteen galleries at the Hessel Museum of Art and Center for Curatorial Studies, Bard College, as well as its entry, atrium, immediate exterior, and auxiliary reading room. Non-sequentially organized, it mixes archival material alongside artwork in a wide range of media, including reprised installations that were supported and showcased by Hearn or de Land, such as Lincoln Tobier’s prescient Roger Ailes: A Retrospective in Context (1992); Renée Green’s strategic mashups of conceptualism and diasporic histories (Bequest, 1991, Taste Venue, 1994); and Christian Philipp Müller’s consideration of décor and European alterity (A Sense of Friendliness, Mellowness, and Permanence, 1992). Rarely seen works by Tishan Hsu, Jessica Diamond, Jessica Stockholder, John Waters, and Alex Bag, among many others, are also on view. The exhibition catalog convincingly asserts that the couple together and independently “redefined the relationship of contemporary art to its markets, while championing art that challenged social and institutional norms and conventions.” But the main through line is the rare affinity and intimate working relationship that Hearn and de Land shared with their artists. For those of us with some proximity to their orbit at the time, the show has as much emotional pull as historical value. 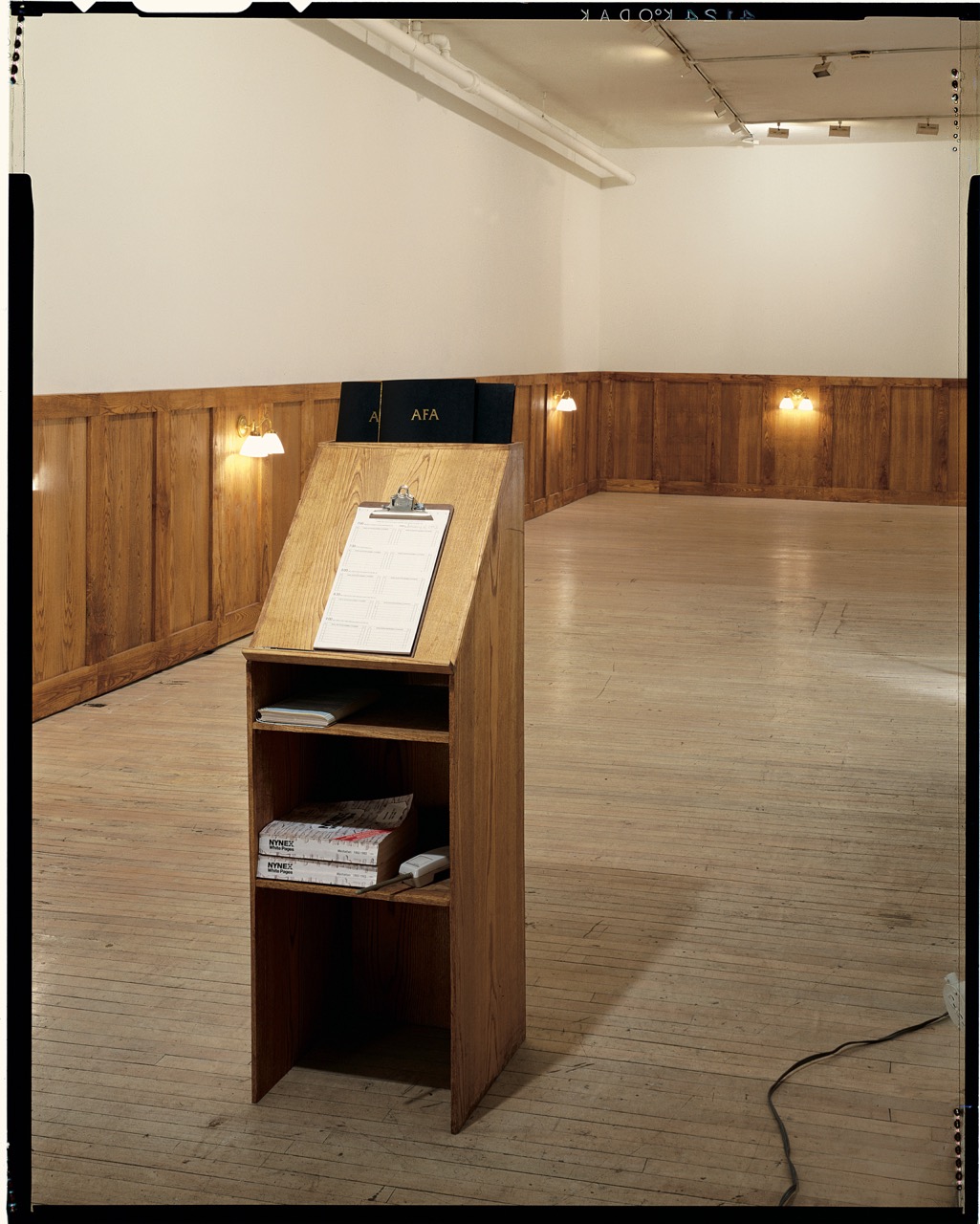 Given additional resonance by the dealers’ untimely passings (both from cancer), another entrée into the exhibit is to recognize how death and loss to disease, specifically AIDS, has become a generational marker. The unruly, performative photographs of Jimmy DeSana and Mark Morrisroe (whose estate Hearn steadfastly represented) feature prominently in three galleries. More elliptically, disappearance and absence haunt the spare and potent, metonymically charged 42nd Street Structures (1995) by Tom Burr. Histories of documentary photography and its engagement with the outmoded and mortality figure in the work of Moyra Davey and Jason Simon. Mark Dion’s collection/classification of preserved marine life from Chinatown (1992) is a record of communing with the dead at its most literal.

On another video monitor, another gallerist presents another show: Lutz Bacher’s Playboys (1993) at Pat Hearn Gallery. Petite, power-suited, and coiffed in a fabulous updo (the higher the hair, the closer to God), our host here is Hearn herself. The shaky then ambling camera, jerking edits, and poor resolution are at odds with her presence, which is all poise, professionalism, and calm. The deskilled/amateur aesthetic suggests both a proto-vlogger channel and Hearn’s openness to experimental modes of art distribution, such as the televisual. Her abbreviated commentary with a few obligatory Vanna White gestures also signals a performance of a kind, but her composure feels unscripted. 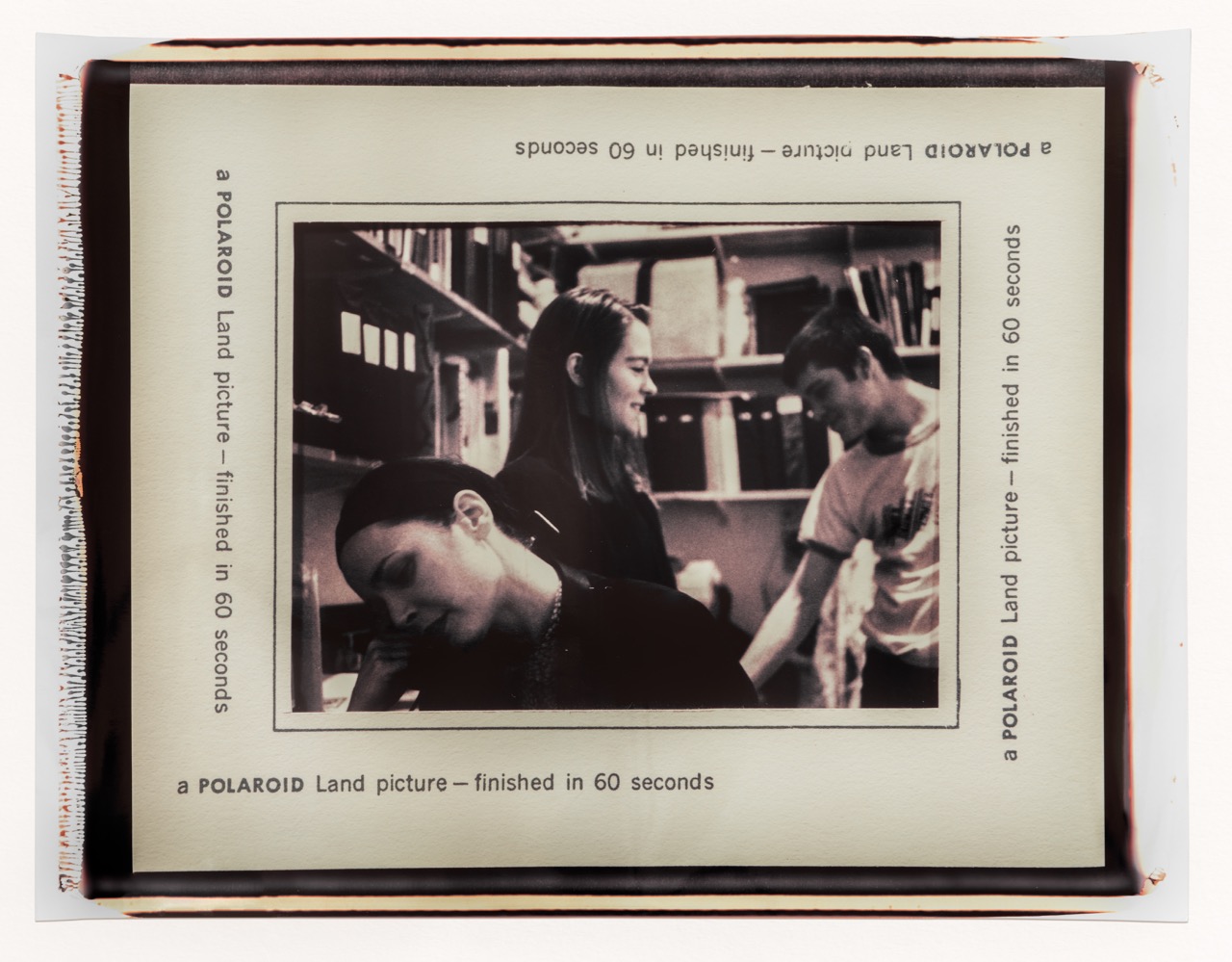 Hearn’s knowing command of her body and its capacity for signification is striking throughout the show, whether captured by Bacher, Morrisroe, or styled by Warhol in silkscreen or Green in commemorative toile. Her artistic collaborations still feel daring, and give expression to desire and objectification as being more fluid and complex than (feminist) orthodoxies can accommodate. It follows that Hearn’s gallery was notable for supporting women artists whose explorations of sexuality, power, and female subjectivity are particularly restless and manifest in unprogrammatic ways for the time: an embrace of metaphysical archetypes and the paranormal (Ana Mendieta, Susan Hiller); absurdist play (Joan Jonas); surveillance tease (Julia Scher); and painting as an embodied and contingent practice (Mary Heilmann, Jutta Koether, Pat de Groot). 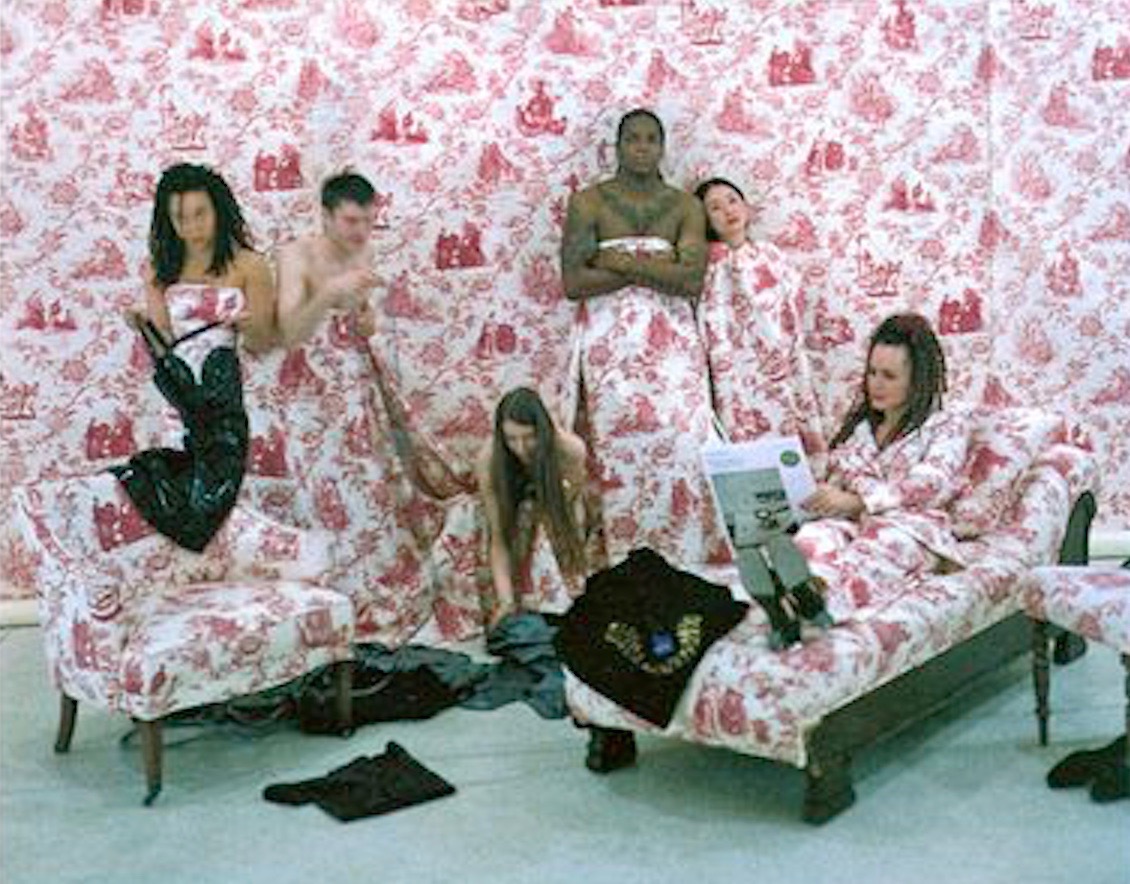 Renée Green, This Was Now Then, 1994. Courtesy the artist and Free Agent Media.

Glimpses of the rhythms of thought and scruffy charisma of de Land are also on view in video. As part of “docu-matter” from the 1992 AFA exhibition Site Simulator (Tivat Bay Montenegro), he and artist Peter Fend engage in collegial repartee about Ocean Earth’s proposal for the production of marine algae to methane gas in the Adriatic Basin. At one point Fend’s pitch for a real estate division of AFA following Sotheby’s example, with de Land as broker, is met with bemused resistance, but the suggestion of shifting roles is of note. De Land semi-actively explored artistic personae, as the pseudonymous J. Dogg (as in Mutt, ha) and, alternately, as J. St. Bernard, both represented in the show with rubber, steel, and fiberglass sculptures and tire-tread drawings.

For someone who was reputedly perennially insolvent, de Land somehow kept AFA active and relevant for close to twenty years, with little more than an ethos of “no capital as cultural capital,” or so it would seem. At the same time, neither he nor Hearn rejected for-profit status in a moment when “alternative” spaces were becoming established as another canon, and together helped launch the Gramercy International Art Fair, an earlier iteration of today’s Armory Show. It may be kneejerk to see something cyclical in the proliferation of youngish dealers in the current Lower East Side, but in that regard the show feels timely, even overdue. No doubt de Land would have continued to swerve, brake, and drive, leading the pack. There is some consolation—in light of his experimental lectures, his Monday night seminars on contemporary art for collectors, and his guidance of Art Club 2000, a student artist collective at the time of its formation—that the archives, which were acquired by Bard, have found rest in a pedagogical institution for future scholars of his work. 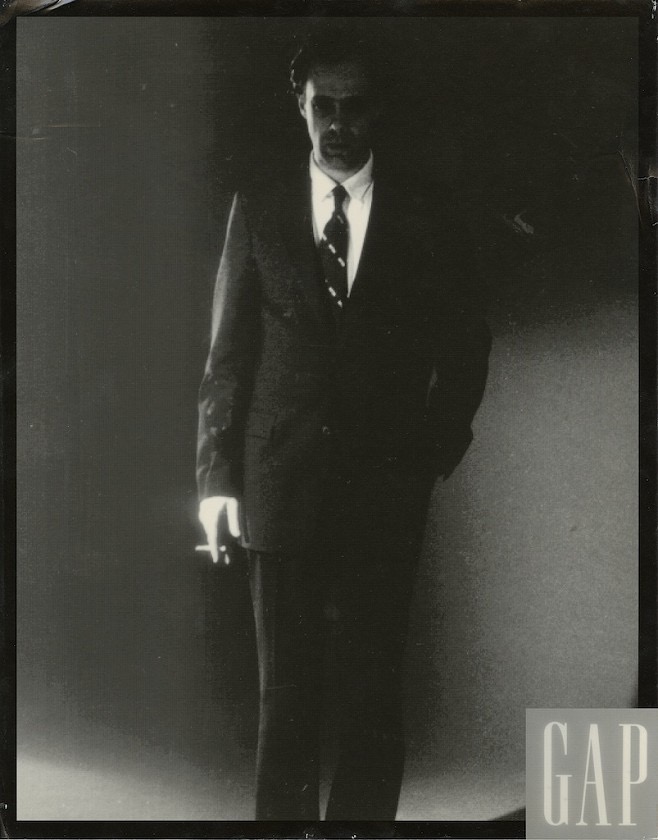 Another greeting, by another artist/gallerist who has departed too soon, came to mind on the train ride back into Manhattan: that of Jackie McAllister, who, as I learned from a publication in one of the show’s two reading rooms, held the official title of vice president of AFA from 1989–92. When he recognized you in the gallery, Jackie had a distinct way of saying your name as a greeting. There was a formality in it and warmth, akin to the Japanese honorific imperative irashaimase, derived from iru/iku/kuru (literal translation: Please be/go/come!). Never officious or robotic as sometimes encountered in stores or restaurants, Jackie’s way was as if to say, I see and acknowledge you. We are here, and it’s time to get to the serious business of active looking and hanging out, of considering together what is being proposed. It was a challenge as much as a welcome, in one crisp enunciation of your name. I like to think that just such a challenge was inherent in Hearn and de Land’s sociality: that art could be something more than the historical succession of discrete objects.

In her catalog essay, Ann E. Butler writes, “As the eyewitnesses and their capacities for recollection eventually fade, archival records increasingly shape personal and historical narratives: what can those who are too young to have been eyewitnesses decipher, interpret, and construct from the same set of archival records that once served as memory aids for those who were present?” I would add, for eyewitnesses, to what extent does our fondness overdetermine our understanding? Histories are shaped, as she notes, as are fictions. Is there a level of mythology, given the centrality of an impossibly glamorous duo in this story, that masks other realities? Was theirs a coherent and consistent vision? How much was persona-driven? Questions will persist. But for the time being: yes, it’s a beautiful show.

Sowon Kwon is an artist based in New York City. Her recent work has been featured at Full Haus gallery in Los Angeles, the Poetry Project, Triple Canopy magazine, and the Broodthaers Society of America. She also teaches in the Graduate Fine Arts Program at Parsons The New School.