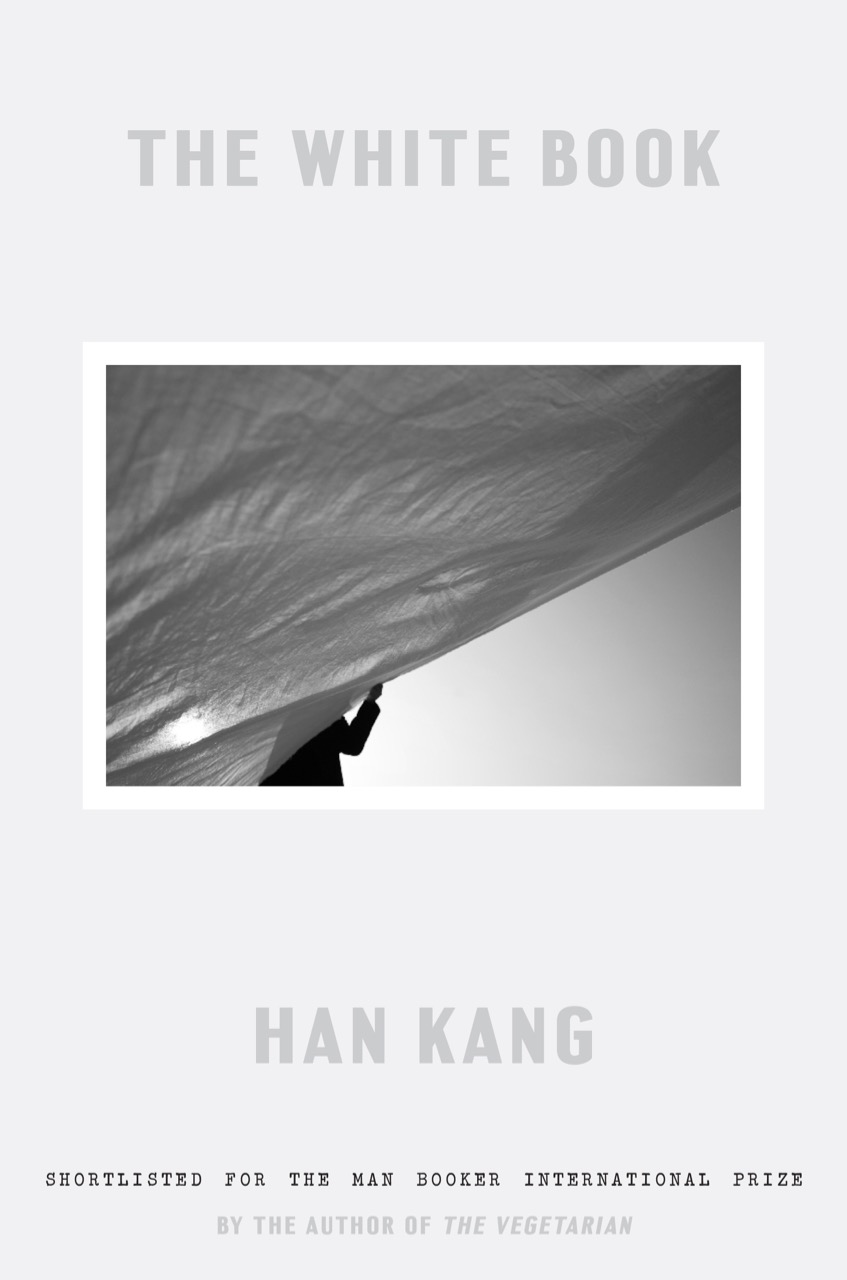 For visual artists of my age and schooling, the color white might first suggest the faux neutrality of modernist gallery spaces (“limbolike,” per artist and writer Brian O’Doherty, who famously labeled them “white cubes”); or the monochromatic compositions of recently deceased painter Robert Ryman; and even the Beatles’ eponymous double album, as designed by Richard Hamilton in pointed contradistinction to the psychedelic collage aesthetic of Sgt. Pepper. But then in the intimacy and quiet of approaching just the right book at just the right time, other images might also surface, with no less charge: the sliver of a pale moon, songpyeon 송편 (traditional Korean rice cakes made to celebrate the autumn harvest and equinox), the blank page, snowflakes, funerary flowers. For this artist, as it happens, the two sets of associations have become of a pair.

The latter grouping is excerpted from The White Book, author Han Kang’s third in English translation, whose pages open with a list of white things in a thin column justified left: “Swaddling bands / Newborn gown / Salt . . . White dog / White hair / Shroud.” Both stark and lyrical, The White Book is as much a meditation on grief as on the color, and is inspired by her older sister’s premature birth and brief life. Its publication follows the astounding The Vegetarian (채식주의자, 2007; 2015 in the UK), in which three narrators recount their relationship to a young woman who is willing herself to become a tree; and Human Acts (소년이 온다, 2014; 2016 in the UK), also polyvocal, and centered around the disappearance and death of a young boy during the government-sanctioned massacre of citizens at the 1980 Gwangju Uprising. Both novels have been widely acclaimed for their wrenching visceral power, formal inventiveness, and emotional and moral depth.

More ruminative in pacing and tone, The White Book resembles poetry collections in its slim presentation and design, while thematically sharing with her previous work an attentiveness to “the dead that had been insufficiently mourned.” Han’s sister, forever older and younger than she, died after less than two hours in her mother’s arms. The consequences of this tragedy are explored in three parts (“I,” “She,” “All Whiteness”) in short episodic fragments that move between places, images, and thoughts. Time folds and points of view merge and blur. In “She,” for instance, the narrator imagines walking through a snowy, war-torn European city as her sister, skillfully weaving personal loss with the area’s destruction and rebuilding (the book was begun during a writing residency in Warsaw). Seoul is also mostly wintry, in snow, blizzard, and frost, while the chill of “breath clouds” is evidence of life. The volume is full of evocative and sharply drawn images—crisp bed linens that “can seem to speak,” the startling proof of bone in an X-ray, a solitary crane, a pebble’s silence, a floating handkerchief—that cumulatively move through something like survivor’s guilt, with care, resilience, and tender offerings: “Now I will give you white things, / What is white, though may yet be sullied; / Only white things will I give.” And an aching promise: “I will breathe in the final breath you released.”

In its directness (I would even say a kind of imagist plainspeak), economy, and phrasal cadences, Deborah Smith’s translation has captured much. (Her treatment of The Vegetarian has been deemed “peerless” by most, but also emotive overreach by some.) A qualm or two, though: the rendering of a young mother’s desperate and feeble plea—and a refrain/mantra throughout—as “For God’s sake don’t die,” seems an unnecessary Anglicization since He, as such, is not invoked (죽지 마라 제발). Then there is the matter of the original title: 흰 hin is a white that is decisively and only adjectival. To add “the book” feels imprecise, redundant. It’s possible that Han herself is trying to bend grammar, as she does genre. (The White Book is categorized as fiction.) Still, the sense of an unfixed adjective as attributive and modifying, denoting the quality of the thing and not the thing itself, is lost, as they say, in translation. Also lost, but possibly inferred, is the connotative nuance in 흰 hin, as opposed to the synonymous 하얀 hayan, which Han has described as a white that is “cotton-candy clean.” Or 백 baeg with morphemic links to Chinese. (Porcelain is baegja. Caucasians are baegin.) In hin is a “certain sadness, the color of fate.” It is double-edged, a white in which life and death are entwined.

In my Korean edition, video stills of a series of performances are interspersed throughout the text. (Their absence in the American version is unaccounted for.) One is a close-up of hands sewing, presumably the tiny white gown that appears earlier in a full spread. In another, Han is crouched over a sheet of paper on the floor, upon which she carefully places small white feathers. It is the aura of black-and-white photography in these grayscale images (though not their aspect ratio) that hearkens back to iconic 1970s task-oriented performances and their documentation. In the figure of the slight Asian woman, it is difficult not to also recall the slow, deliberate movements and spare mise-en-scènes (and premature death) of Theresa Hak Kyung Cha (1951–82), whose disquieting yet expansive works also engage language, loss, memory, and history.

“White has a tendency to make things visible. You can see more of the nuance.” The quote is by Ryman, who by nuance refers strictly to variations in the material fact of a white painting’s presence on a wall—its surface, edge, support, the cool and warm of its undertones, its viscosity, the quality of light in the room in which it hangs. Like many in his milieu, he viewed illusionism (along with “narrative, symbolism, story, or political project”) as a limitation in “going forward.” I’ve wondered about lofty claims for abstraction in painting since school days, and have noticed that for even the most rigorous of formalists, there is still some degree of borrowing, of referents, in their work. With my teachers it was often nature, more often music, and most often, jazz. Ryman cites bebop. And like bebop, “The purpose of painting is to give pleasure.”

In considering that purpose, I recognize that the world of Hin is somber, even bleak. Laughing is “faint, cheerless” (occurring only “whitely”) and punchlines are “lackluster” (the answer to the riddle “What’s a dog that’s a dog but doesn’t bark?” is a pun on “fog,” or ahngae 안개, which also translates as “not-dog”). College friends die young, the “dizzying sweetness” of sugar cubes have faded, and under two coats of house paint (white), the incised numbers on a metal door remain scars, “straight and curved wounds” with rust “like long dried bloodstains.” There is no music, excepting the minor chords with which that absence is made plain. Color is nothing if not symbolic. There is History. There is pain, and the “urgent desire to transcend pain with language,” as one reviewer put it. There is so much pain that at Han’s parting imperative, to “Live,” I can’t say I’m exactly sold on the prospect.

And Ryman’s alternative? The tactile delights in his work, which also foster a heightened awareness of the white cubes in which they self-consciously reside, are very real and profound. I challenge anyone to walk away from a direct encounter unmoved. But to take him at his word when he outlines his strictly materialist approach, do we force a denial or avoidance that is not only strategic but also psychic, a certain staving off or holding at bay? It strikes me more now than in the past that, like his conceptualist and minimalist peers, Ryman would have been of age for military service during the Korean War. His quote cited earlier actually begins this way: “I never thought of white as being a color.” Would that we all had that choice.

Sowon Kwon is an artist based in New York City. Her recent work has been featured at Full Haus gallery in Los Angeles, the Poetry Project, Triple Canopy magazine, and the Broodthaers Society of America. She also teaches in the Graduate Fine Arts Program at Parsons The New School.