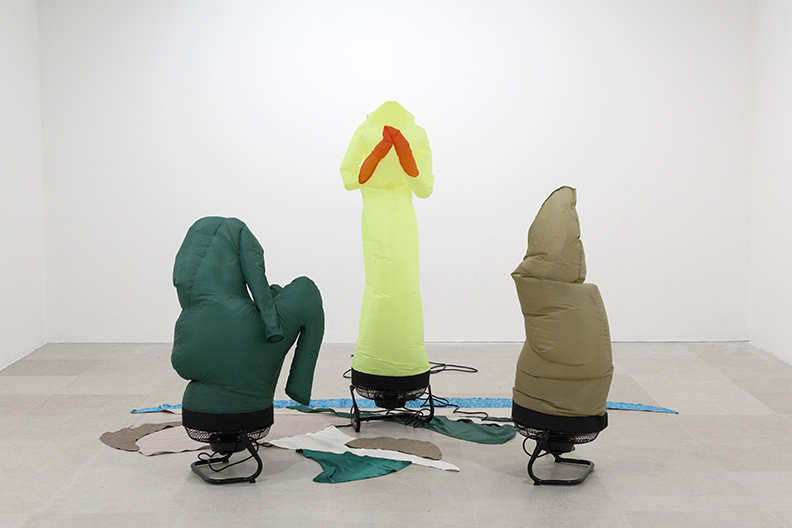 They’re fragile, anthropomorphic entities, slightly more substantial than silhouettes but not quite sculptures. Paul Chan calls them “breathers”— intricate constructions made of nylon tubes, attached to and animated by big, noisy fans. And they’ve taken over Greene Naftali’s street-level and eighth-floor galleries. We have all seen such inflatable creatures with open arms and raised hair lingering on the sides of streets and highways, frantically inviting us to change the tires or clean the windows of our cars. Like these extroverted automata, Chan’s “breathers” are aggressively hollow and seem to be pointlessly, manically agitated. But their architecture is such that their movements are considerably more extreme—their twisting and swinging both more random and more expressive—than the gestures of their roadside cousins. They are also less lonely (in most cases they form groups, usually attached by the arms) and oddly elegant. Even as they evoke those forlorn plastic bags that the wind sometimes leaves hanging from light poles or tree branches, for months and years, the “breathers” resemble dresses from Comme des Garçons.

On entering the ground-floor gallery, viewers are likely to first encounter the imposing Pentasophia (or Le bonheur de vivre dans la catastrophe du monde occidental). The work consists of a large wooden platform raised a few feet from the floor by metal rods. Under it we see a variegated collection of garbage (pages from books, reproductions of paintings, more plastic bags and cardboard boxes, parts of tools and empty cups). On top of it, surrounding a hole in the center, five “breathers” hold hands. Their vaguely monkish appearance is reminiscent of the scuttling, shrouded figures in Quad I and II, a pair of made-for-TV plays that Samuel Beckett produced in 1981. (Echoes of Beckett are unmistakable, too, in a pathetic figure that leans against the wall in the same room.) While its subtitle makes reference to Matisse’s fauvist canvas, Pentasophia’s composition more closely resembles the French painter’s later La Danse—particularly, it seems to me, the second version, from 1910, whose bright red figures are as uncanny as the round of “breathers” that may appear to the observer as witches dancing on an empty field. 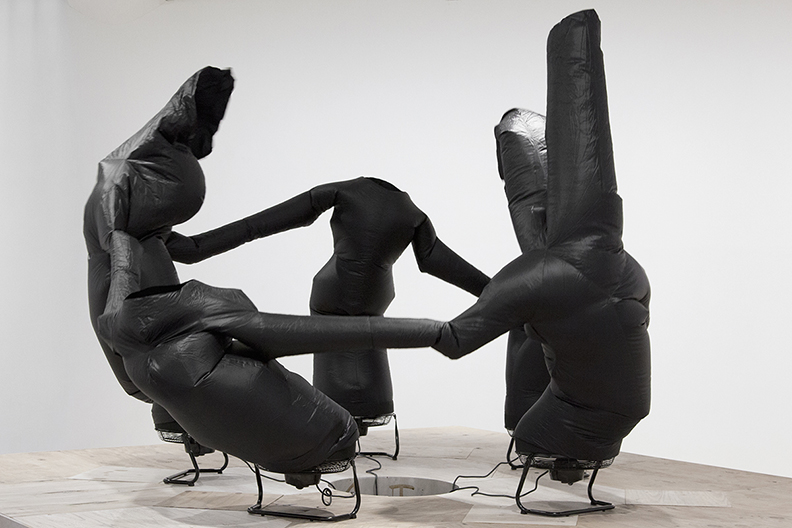 Five are the central figures in Witches’ Flight, a painting by Francisco de Goya, who, during the height of the European Enlightenment, produced some of the most powerful representations of the persistence of irrational cruelty in a putative age of reason. A similar persistence haunts the works in Chan’s show, which were made in a year when everything from hostile responses to migrants and refugees to the emergence of new ethnic nationalisms seemed to indicate the occurrence of a catastrophe du monde occidental, and, together with it, the cancellation of the Enlightenment promises to which, it seems, this world was never sufficiently attached. The monde occidental, which intended to be more-or-less secular and democratic, traced its cultural beginnings back to the heyday of Greek philosophy. It is no coincidence that Chan’s exhibition is titled Rhi Anima, a variation on De Anima, a treatise where Aristotle describes the nature of the souls, spirits, and psyches of the manifold of beings. What does “rhi” mean? The only candidate I’ve been able to find is the acronym for “rumor has it,” which would make the title a pun on Aristotle (as well as a play on the word “reanimate”). Philosophy as potentially grim comedy has been a constant in the work of Chan, both as a visual artist (his 2009 video projections Sade for Sade’s sake) and as the founder of Badlands Unlimited, an entity devoted to publishing artists’ books, some of which reprocess and recycle texts from the likes of Catullus and Plato.

The philosophical reference is especially apropos: Aristotle’s treatise postulates a relationship between life, movement, and spirit; his theory relies on the resources of the Greek language, where the word “pneuma” designates the breath that animates the living, moving, sentient creature. Chan’s pneumatic objects, at times, seem sentient too and their accidental choreography elicits a peculiar response: we know that they are nothing but mere tubes of fabric, agitated by the brusque rafts of air produced by their masters, the powerful, even sadistic machines to which they are attached. But they seem, at one moment, to be in pain, and in the next to be ecstatic. We don’t know if they are dancing or shaking—or resisting, as well as they can, being swept away by a tempest. Perhaps the stage on which the five figures of Pentasophia are standing is a platform in a park, and the garbage under it the leftovers of a peaceful, pleasant gathering not dissimilar to the one shown in La bonheur de vivre, but the platform may also be a boat (a raft) that carries the survivors of a shipwreck. And, if this is the case, who are the dancers or castaways? Do they belong to the community of refugees that the sea unceasingly dumps on the beaches of a ruinous Europe, the latest metamorphosis of the beaches idealized by Matisse, or are they the inhabitants of the monde occidental running away from their now devastated realm, uncertain if they should mourn or celebrate? 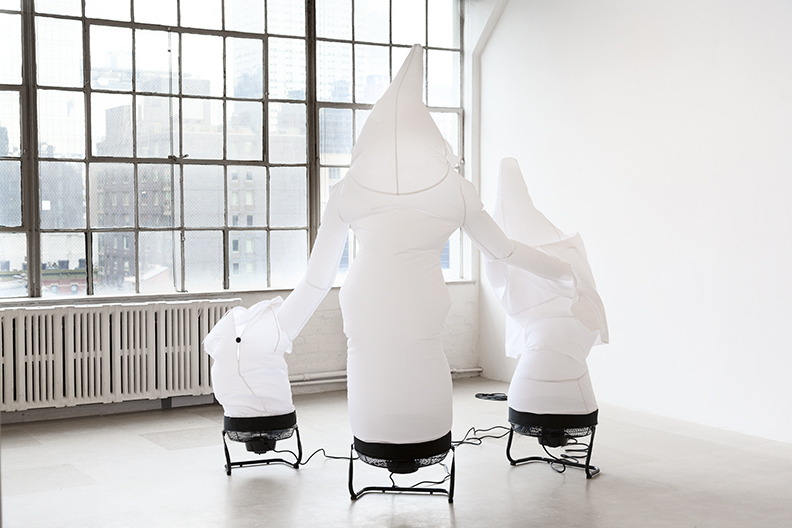 In the street-level gallery, Chan’s works are almost uniformly black. White, by contrast, is the dominant color of the “breathers” elevated on the eighth floor. Some of them wear little capes; the atmosphere is rather idyllic. Children play, or, once again, dance, now over a tiny rug (Dimposium). Two of them walk with their mother (Madonna With Childs), who encourages or pushes them to move toward one of the corners of the gallery, where there is nothing. A family hold hands around a pole on a small semicircular platform that is covered with artificial grass. Are they still in the midst of their travels or have they finally arrived? They seem to be staking claim to a territory: they are conquerors (or pirates). But is it really a family? De Se Moerae is the title. Another reference to a classical Greek trope: Moerae are the sisters (Clotho, Lachesis, Atropus) who spin human fate. Their flag here is black, evoking the more obviously troubled “breathers” on the ground floor. Here again, Chan creates a work animated by references. But to what end? 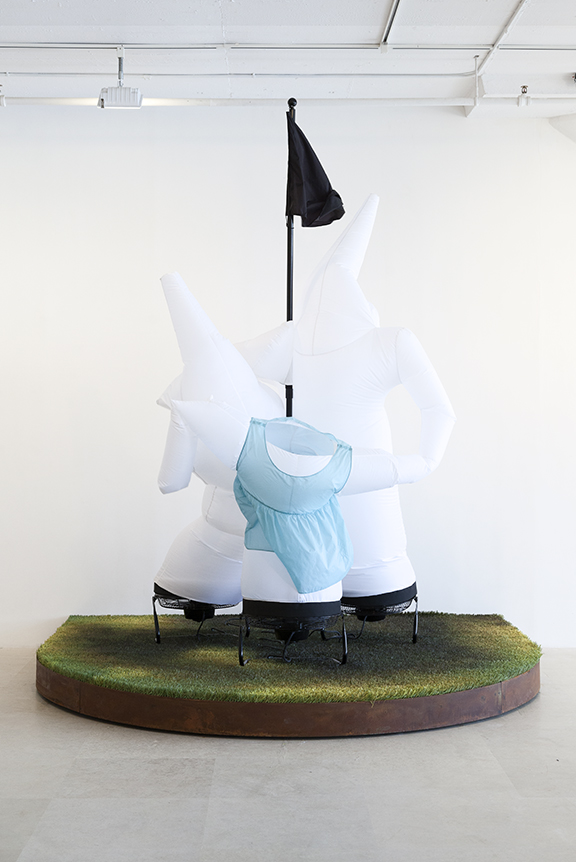 We hope, momentarily, to find an answer in Espacescape: four, large-scale ink-on-paper panels gridded with abstract, logo-like icons. They invite us to decipher some sort of message in relation to the terms in the title: space, landscape, escape. But the signs remain blissfully opaque. Viscerally evoking the calamities of the present and linking them with Greek philosophers in an imprecisely recalled antiquity, or French painters of a heroic avant-garde—demanding our speculation while rendering it impossible for us to conclude anything in specific—Paul Chan’s Rhi Anima is one of the most powerful artistic responses to our troubling circumstance that I’ve seen in recent times.