Nonfiction
How to Go Mad Without Losing Your Mind 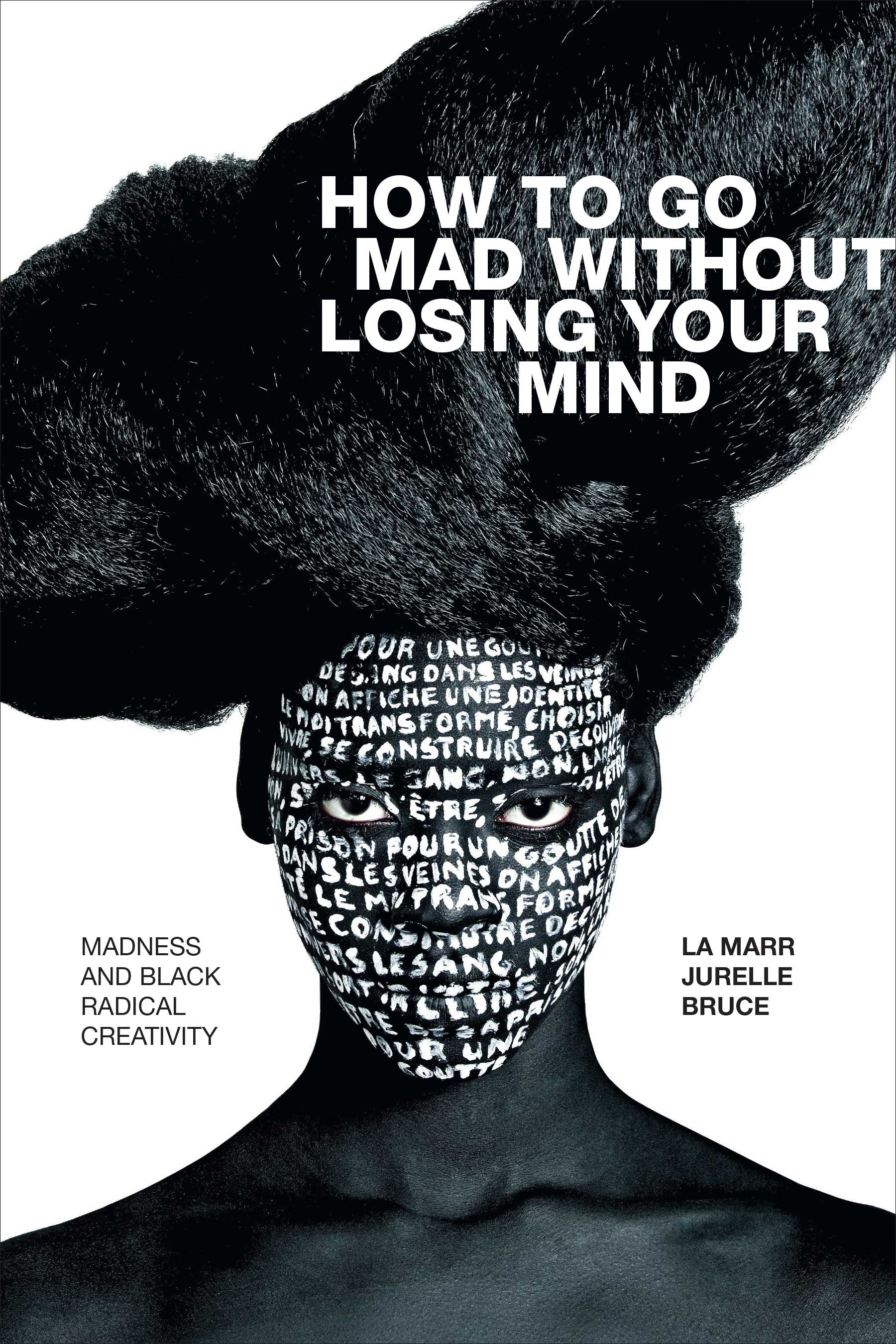 You’re already ate up, already inside the belly of the beast, tossing around and trying to come to some notion that ain’t already a notion because the notions inside of the still-hungry belly in all their claims of rationality don’t make no sense. La Marr Jurelle Bruce’s How to Go Mad Without Losing Your Mind: Madness and Black Radical Creativity gets right down deep inside the beast’s belly with his “mad methodology” and unravels the logics made up there to reveal what black creative artists do given the ontological conundrum of being ate up.

Bruce’s discursive forensics foreground, on the one hand, antiblack psychiatry and its inventions of mental illnesses to undercut black resistance and personhood, and on the other hand, black liberation that’s wound up with more productive madnesses called into being by the conditions that animate antiblackness. Did y’all know, for example, there was a whole category of psychiatry—which, truthfully, has always been the wackiest branch of “medicine”—that pathologized black people trying to get free? Sun Ra, Bessie Smith, Nina Simone, Dave Chappelle, Lauryn Hill, and countless others exemplify the ways that black creative innovation is its own special kind of mad genius made possible by the racist regime’s insistence on its innate superiority. Maybe, say Bruce’s theories, without white supremacy’s trickery dickery, we’d still have black genius, but perhaps less beautifully unhinged.

Given the complicated web of these two poles and everything in between, a mad methodology or an approach that itself does not claim a normative logic-making feels right and necessary. After all, you can’t get blood from a stone. Or maybe you can. Maybe blood emerging from stone is exactly what Bruce is contending happens in the black radical imagination when it’s pigeonholed, overwhelmed by fake discursive reasonings, closed in, locked down, captured, restrained, and brutalized. Although there is a historical trajectory (“from antiquity through postmodernity”) named and breathing up through How to Go Mad, because Bruce is for the most part considering well-known contemporary celebrity creatives (with the exception, perhaps, of jazz musician Buddy Bolden), we must understand rather implicitly that madness is an extra-individual state of being when it comes to black people. If Sun Ra got put in the booby hatch, it can happen to you too. It can happen to Lauryn Hill held by the clutches of racial capitalism.

Historically, when I have thought about the relationship between blackness and madness, I’ve been influenced by the cultural perception that black people have little access to privileged spheres of care when we experience what Bruce calls “medicalized madness” in even its more benign form—say, depression. My mother was depressed for most of her life. I know this because she would say “I’m so depressed” aloud and sink down into her weathered gold-velvet lounger and draw her face into her hands, despairing. Her depression never took the form of inaction or sloughing off to bed for days; instead, she performed her regular duties at work and at home like a machine until inexplicable impatience and sudden rage overtook her. Her voice would become loud and shrill as if emanating from her entire body as it sliced through the rooms of our small house. I saw a version of this ringing black body in every working-class black household I ever visited as a young person. Black madness-as-depressed state was the most normal thing in the world, akin to Dave Chappelle’s “This racism is killing me inside” of which Bruce takes note. This normal is unworthy—as it took up space in these bodies—of care, passing consideration, or the word “crazy.” Which is to say that the extra-individual madness Bruce maps out has different registers and pitches, and the pitch that conjures the radical imagination is a rather exceptional one.

What we are importantly brought to in Bruce’s devastating exploration of madness, black survival, and black radical creativity is a black modernity that intervenes in and obliterates modernity’s other project of obliterating black bodies, black thought, black imagination—testifying, as Bruce does, to the derangement of Reason with a capital R. “I use derange,” he writes, “also to signal how the Atlantic slave trade, and the antiblack modernity it inaugurated, framed black people as always already wild, subrational, pathological, mentally unsound, mad.” Black radical expressive culture emerges from the nothingness produced by this attempted annihilation, and finds there a “get free” drive, to borrow from Fred Moten’s persistent question, “How do we get free?”

“Blackness,” Bruce goes on to assert, “contains creative and insurgent power . . . far exceeding those wretched sites of origin and those cruel conditions of coalescence.” What is on the other side of the “psychonormative majority” who drew that coalescence into a stark “real” is the “crazy nigger,” a performance of sorts, which can and does, in black creative expressions, take the form of radical genius that speaks to black subjectivity in languages that the psychonormative majority can’t understand. Is this a loophole of freedom, a pocket inside of the belly of the beast that might trigger that beast, or as James Baldwin says, at the very least, fuck with his mind?

The stories Bruce explores at length—of Sun Ra, Lauryn Hill, and Dave Chappelle—are exemplars of the multidimensionality of black madness. They reveal how it gets attached to the black body by outside narratives, how the black creative takes up performative madness as a method of resistance. And they glimpse how an extra-individual madness floats through all black people in the United States, but is differently tuned when it floats into someone who affectively transmutes the imagination and what it does from its great beyond. It’s like the more pressure put on these black bodies, the more they turn to a weird, from-elsewhere material—at least temporarily.

The sheer range of academic discourses that Bruce engages—from disability studies and psychoanalysis to affect theory and black studies—is impressive enough. What Bruce does within their intersections, however, is create a kind of poetics of black madness—a way of looking that is itself a way a making; or maybe it’s the converse—a way of making that is itself a way of looking. This is how Bruce gets to possibilities for reading into the silences, analogous to Toni Morrison’s contention that metaphor can be more true than fact, or Bruce’s own powerful insistence on the “symbiotic interrelation between material and discursive violence.” I can’t predict the future, but it’s so obvious to me that scholars will long be grateful for Bruce’s expansive imagination and the careful attention paid to radical black creativity in this wildly astute and socially and emotionally conscious work.

Dawn Lundy Martin is an American poet and essayist. She is the author of four books of poems, including Good Stock Strange Blood, winner of the 2019 Kingsley Tufts Award for Poetry. Her nonfiction can be found in n+1, the New Yorker, Ploughshares, the Believer, and Best American Essays 2019. Martin is the Toi Derricotte Endowed Chair in English at the University of Pittsburgh and Director of the Center for African American Poetry and Poetics.