Melissa Febos makes a powerful case for the subversive potential
of life-writing. 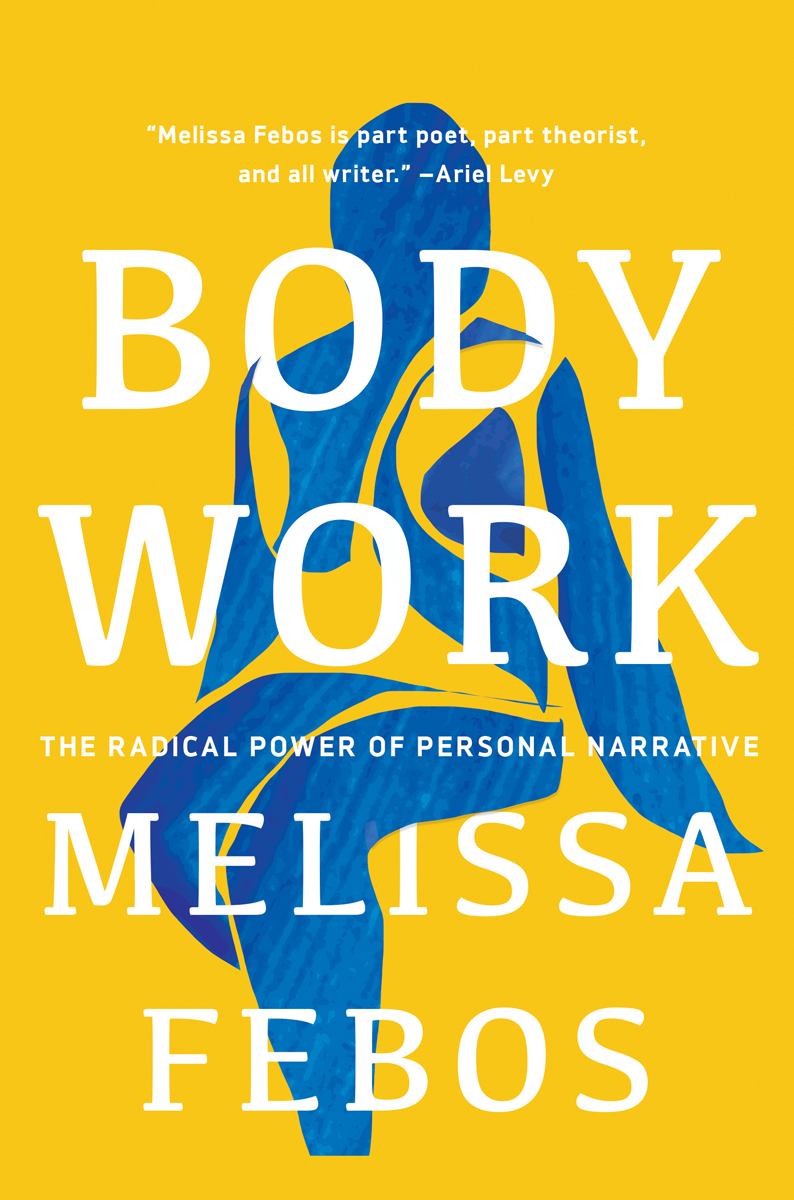 In her new book, Body Work: The Radical Power of Personal Narrative, memoirist Melissa Febos handily recuperates the art of writing the self from some of the most common biases against it: that the memoir is a lesser form than the novel. That trauma narratives should somehow be over—we’ve had our fill. That the hard-won wisdom and revelatory insights of the genre (its “confessions”) have been plopped onto the page like raw eggs, uncooked and without seasoning or craft. That personal narrative is necessarily indulgent and narcissistic. That memoirists have gazed so hard at their navels, they’ve buried their heads in their guts.

Febos rejects these belittlements with eloquence. To her readers, this will come as no surprise: she has made a career of searching and re-searching the self. Her three previous books of vigorous, often brutal self-interrogation include Whip Smart (2010), a memoir of sex work and addiction; Abandon Me (2017), a luminous, painful collection of linked essays on intimacy, attachment, and the glory and devastation of love; and last year’s superb Girlhood, which delves into Febos’s early sexual development and issues such as slut shaming, stalking, and consent.

In Body Work, a hybrid craft text–memoir, Febos leads us through the lessons learned in tackling each of the above, beginning with her starting point as a graduate student of fiction whose low opinions of the memoir do battle with her evident talent for it. (Whip Smart, she tells us, originated in a seemingly throwaway nonfiction exercise and her professor’s insistence that she expand it.) The implicit ending point is her indisputable success: if she has been associated with the sort of too-easily-dismissed content Body Work champions, she is also a major force in creative nonfiction who now teaches the genre at Iowa (reputably one of the nation’s top programs). In its hybridity, this book formalizes one of Febos’s central tenets within it: that there is no disentangling craft from the personal, just as there is no disentangling the personal from the political. It’s a memoir of a life indelibly changed by literary practice and the rigorous integrity demanded of it: “Transforming my secrets into art has transformed me.” Binding their insights to Febos’s writing life, the four essays in Body Work are, then, as much about her body of work as they are about the art of embodied writing.

Febos is an essayist of grace and terrific precision, her sentences meticulously sculpted, her paragraphs shapely and compressed. Their careful construction supports Febos’s momentum: each passage advances with the agile grappling of a gymnast’s perfect vault. Yet Body Work focuses not on style or composition but on more macro issues in creative nonfiction: the politics of narrating trauma, the contempt for “confessionalism,” the challenges of writing sex, the ethics (and, to some extent, the legal concerns) of representing others.

The book opens with “In Praise of Navel-Gazing,” which incisively defends personal narrative from the charge of self-indulgence. Quite the opposite, Febos contends: such writing is, in fact, endlessly challenging, emotionally taxing labor. “To place our flawed selves in the context of this magnificent, broken world is the opposite of narcissism,” she argues, “which is building a self-image that pleases you.” She adopts similar strategies to defend trauma narratives, revaluing them as “not gauche,” but “subversive.”

This essay was published in earlier form in 2017, and responds to the then-recent (still operative) shift in publishing from trauma hunger to trauma fatigue. Her objection to the claim of exhaustion, here represented by a male editor who suggests “I’m not sure we need any more of those stories,” is as forceful as it is forthright: “the resistance to memoirs about trauma,” she posits, “is always in part—and often nothing but—a resistance to movements for social justice.” Febos is appealing to a general literary audience, her goal to grant writers, especially women, permission to tell their stories. She does so deftly and persuasively. Yet I wanted to see her get more complicated—for example, to consider the trauma fatigue expressed by queer and trans and BIPOC writers, which arguably stems from elsewhere: e.g., from a resistance to decades of the publishing industry’s desire for their suffering.

I also, impatiently, wanted Febos to leap over the discussion (via psychiatrist Judith Herman) of Freud and hysteria as evidence for both the preponderance of trauma in women’s lives and the recuperative power of narrative, which seems by now like well-trodden ground. But what’s fresh, of course, is Febos herself, remapping this terrain through her context, her life and writing, her unusual combinations of sources (William H. Gass meets Elissa Washuta, for example), her painstaking exactitude and unflappable sureness—and the new readers she will reach with all of this.

The next two essays are more craft-oriented. In “Mind Fuck,” Febos eschews rules in favor of “unrules” that encourage writers to unlearn prescribed notions of what sex is or should be. “Every sex scene that we write,” she imparts, “has the potential to expand a reader’s entire conception of goodness.” (And, also: “sex doesn’t have to be good.”) Often discussions of sex writing begin with what is considered “bad,” laughably so, as examples of what not to do. In insisting that we develop, each from our own experience, new ways to describe the vastness of sexual life, Febos’s “unrules” are aimed at opening up possibilities. It’s this spirit of generosity and permission that defines the book as a whole: any indulgence on Febos’s part is bestowed upon the reader.

Where the first piece validates the general practice of writing the self, the last, “The Return,” defends the confessional mode, that much-maligned tradition: “People have always liked to read confessional work, and they have often liked to denigrate it as well,” she observes with characteristic concision. Febos takes seriously the exercise of writing as confession, recasting it not as diary dump but as a necessary process for change. One lens is what her wife Donika calls “beggin’-ass songs”: ragged love ballads of all sorts in which the singer has a jagged need to love, to be forgiven, to return, a form that Febos describes as a kind of hymn. Another is that of religious, especially Jewish, philosophy: this via Maimonides, who names the act of confession as the last stage in the process of repentance. One of the most affecting threads reflects on how writing “Abandon Me,” a huge and devastating essay about a huge and devastating love, convinced her to leave the relationship. Personal narrative is about achieving not hindsight, she explains, but “change of heart”—“a shift toward, or away, or perhaps a desire to return to some truer version of myself.” For Febos, what makes writing so endlessly compelling is this “freedom to return, again and again.”

In its various returns to her life and writing, Body Work continually enacts that freedom. And in reiterating the undying problem of patriarchy as it has seeped into literary values, Febos’s latest contributes to a tradition of queer and feminist authors interrogating the terms by which their work is assessed. In that sense, it may be most electrifying for the uninitiated. And for those who have been inside this conversation, it offers a powerful, buoying return.

Megan Milks is the author of the novel Margaret and the Mystery of the Missing Body, finalist for a 2022 Lambda Literary Award, and Slug and Other Stories, both out now from Feminist Press.