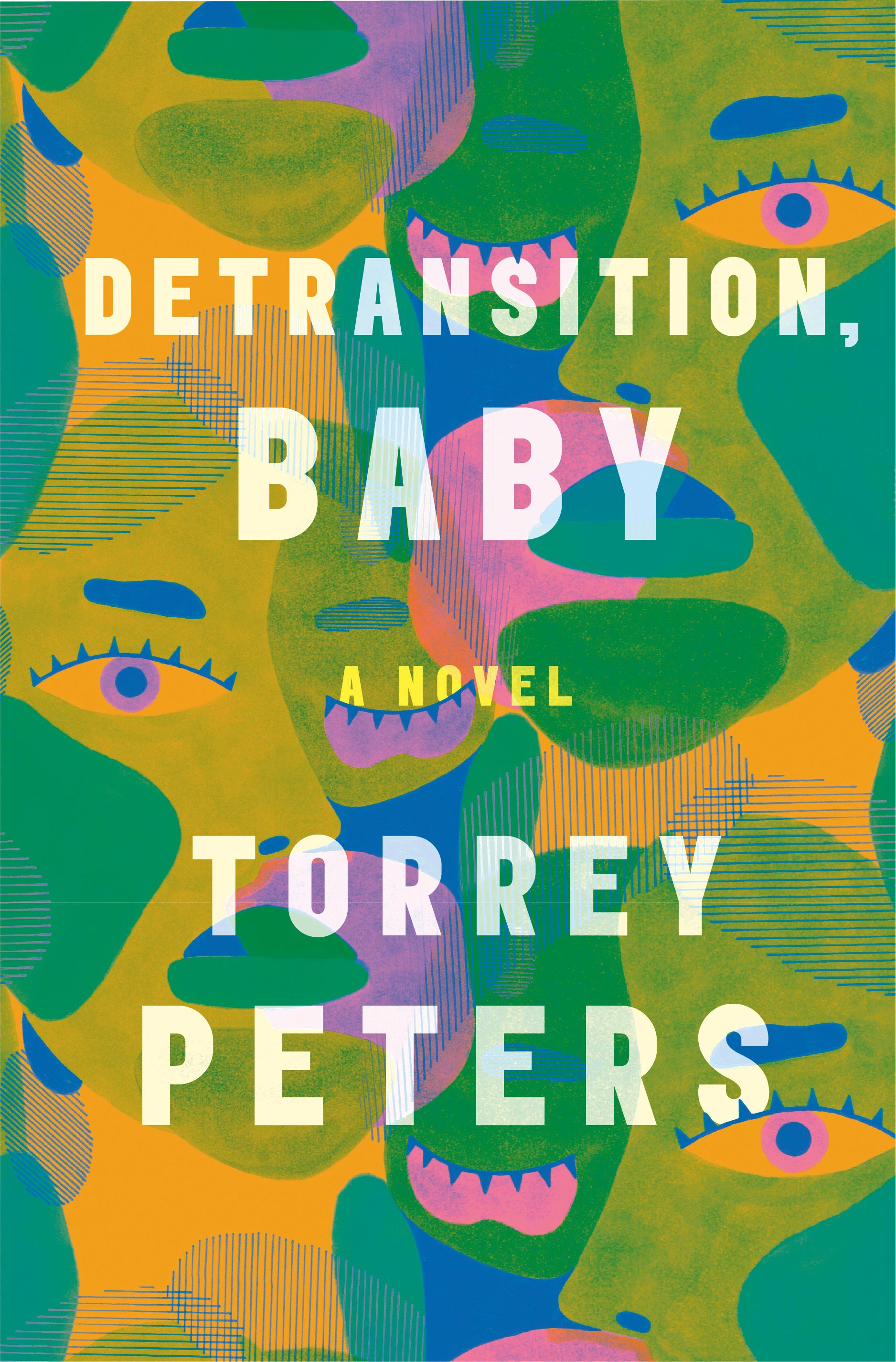 The title of Torrey Peters’s first novel is in some ways a joke, the flippant imperative doubling as an order of events: first comes detransition, then comes baby. It’s the first of many wisecracks in this vivacious comic novel about motherhood, a book that merrily skewers straight and queer orthodoxy alike. Savvily constructed as a breakout novel, Detransition, Baby is almost certainly the most buzzed-about book in the history of transgender fiction. And it’s terrific: smart, socially generous, a pleasure, a gift.

Ames, formerly Amy, stopped taking estrogen three years ago and has reverted to life as a man. Believing himself sterile from his earlier use of testosterone blockers, he has been having unprotected sex with his boss, Katrina. Oops! She’s pregnant, and would like to know his thoughts on keeping the child. When Ames tells Katrina—a presumably straight, recently divorced cis woman—that he’s a former transsexual, she’s predictably upset: “You deceived me,” she cries, in a winking riff on the usual trans-deceiver trope. As Katrina works through her trans panic, Ames gives in to acute dad panic. Though he’s living as a man now, he continues to have an ambivalent relationship to masculinity and finds the prospect of fatherhood uniquely horrifying. So he calls his ex, Reese, a trans woman who knew him as Amy, and dangles a proposal: co-parent with him and Katrina. If Reese is part of the picture, Ames believes, he’ll have more room to be a parent who isn’t The Dad.

What will Reese get from this arrangement? Motherhood, Ames offers. It’s a role Reese covets, one that has not been and will never be readily available to her—as mother to an actual child, that is. She has adopted the role in other contexts. “I have a gift for mothering,” she tells Katrina. “All I do is mother people. I want to be a mom so bad that I make everyone my children. Other trans girls. Men too, actually.”

And Katrina? She’ll have two co-parents instead of one. (Other gifts, like queer cred and a trans education, become evident later.) After many objections and a lot of discussion, Ames pulls both Reese and Katrina, at least provisionally, on board. What initially seems like an absurdist Shakespearean gender-play plot isn’t that at all, it turns out. It’s instead a feasible proposition, certainly not the first alternative family structure ever dreamed up, but perhaps the first of its kind to appear in literary fiction. Peters explores the cross-cultural frictions it sparks with meticulous nuance and terrific wit.

Like The Argonauts, Maggie Nelson’s memoir about queer family-making and motherhood, Detransition, Baby challenges the anti-reproductive No Futurism of early-twenty-first-century radical queer politics. Because futurelessness is the default for trans women like her (who have “no jobs, no lovers, no babies”), Reese suggests that the more radical position might be “to luxuriate in the contemplation of how bourgeois to become.” The novel too luxuriates in this contemplation, engaging a chatty, lightly ironic third-person narrator in the tradition of Jane Austen to approach something like bourgeois domestic realism, minus the manners.

Those who are already fans of Peters—author of two audacious novellas written explicitly for other trans women as part of a trans counterliterature—may balk, as I did, at the idea of bourgeois values and the domestic sphere intruding upon her fiction. But the other side of it is this: the installment of trans lives and trans concerns into the arena of women’s literature—and the nuclear family. In any case, this is the same Torrey Peters, as announced by the opening scene, wherein Reese enjoys erotic impregnation roleplay with her HIV-positive straight-married boyfriend. With precisely zero interest in making her characters paragons of respectability, Peters joins a school of novelists (e.g., Alissa Nutting, Ottessa Moshfegh) who revel in the unruliness of resistant women.

The narration alternates between Reese and Ames, crisscrossing through their back stories to tell the history of their relationship, which involved a sort of mothering: Reese “had taught him to be a woman . . . or he’d learned to be a woman with her.” This kind of trans parenting is one of many examinations of motherhood that take place in the book. Ames and Reese see themselves as part of a culture of motherless white trans girls. In contrast to Katrina’s close, supportive relationship with her mom, they’ve been largely rejected by their own mothers; in contrast to the strong family ties in queer-of-color ballroom culture, they’ve floundered in the absence of trans elders. The novel’s concerns with trans futurity are centered within a feminist reproductive justice framework. Abortion, miscarriage, IVF, adoption, the history of forced sterilization—all are handled with agility and grace.

Though it’s initially what, in her view, separates Reese from women like Katrina, motherhood as problem and prize becomes the ground for their strongest connection. Another key cross-identification involves divorce. “Divorce is a transition story,” Reese imparts to divorced Katrina, reasoning that for many cis women divorce has meant “a total reframing of their lives.” And since Reese doesn’t have trans elders, she believes divorced cis women to be “the only ones I think have anything to teach me, or who I care to teach in return.” By teaching, she means mothering; and it’s through Reese’s developing “mom-crush” on Katrina that the novel does its most cross-cultural work, building bridges between trans and cis women’s experiences.

Then there’s the narrator, an omniscient maternal type who scurries after her characters to cluck at and contextualize their behavior, showing us how to read and react to them. Equal parts loving and eviscerating, our narrator knows all and withholds little. If her knowingness can become at times overbearing, it’s a function of her role. Indeed, the novel is so rich with social commentary one could almost miss the soundly built plot whirring softly in the background.

Can it be merely eight years that have passed since Imogen Binnie bestowed upon us her beloved novel Nevada? That book inaugurated a new era of transgender fiction that was largely minoritarian, speaking to a queer and trans readership and largely ignoring the cis/straight gaze, which wasn’t looking anyway. In 2016 Peters started self-publishing her work because (she wrote in her bio at the time) she had “concluded that the publishing industry doesn’t serve trans women.” If Detransition, Baby marks the launch of a next generation of trans fiction—a breakout, upwardly mobile generation—it’s by design, having been made (like many queer and nonnormative families) with vision and strategy, and a community of precedents supporting it. Peters’s brilliant novel blasts through the gates to claim more space for trans futures in fiction.

Megan Milks is the winner of the 2019 Lotos Foundation Prize in Fiction and the author of the novel Margaret and the Mystery of the Missing Body, forthcoming from Feminist Press.