Film
A Wrinkle in Time

Tessering to a dark corner of the galaxy: director Ava DuVernay delivers her take on the children’s classic. 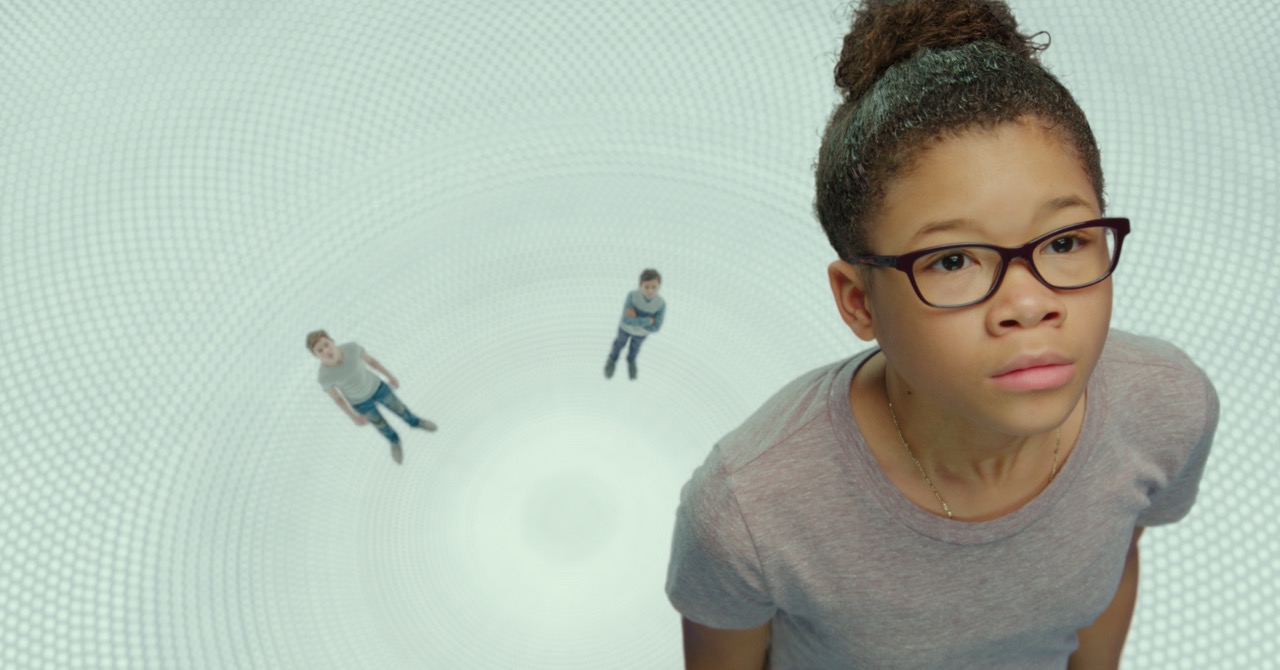 A Wrinkle in Time, directed by Ava DuVernay

As a teenage video store clerk, I came to know movies by category, and shelved each one according to its kind: Comedy, Drama, Horror, Documentary, Foreign, New Release. In my memory, Kids and Animation shared a section; over my tenure, row by added row, Video Games nearly ate the store. Twenty-some years later, the streaming service Netflix arranges its offerings into micro- as well as macro-categories, some of which are standard and some of which, a user realizes with dismay, may have been devised just for her. These categories gather previously segregated genres under artisanal banners: Do you feel like a “Cynical Drama,” a “Cerebral Biographical Movie,” or is it more of a “Critically-acclaimed Inspiring Fight-the-System” kind of night?

Inspiring is a tricky word, much abused by Netflix and beyond. Its contemporary usage emphasizes the shift toward a view of all things in terms of user experience. Rather than describing or admiring a thing, and in lieu of considering its worth, we ask: what did it do for me? At the same time, a growing self-consciousness around the individual’s relationship to feeling and emotion has altered the way narrative forms, including movies, accrue value. A certain overcompensation has been the result: in the current self- and feeling-oriented marketplace, to be inspiring is a peak state; to feel inspired is a complete experience, an end in itself. 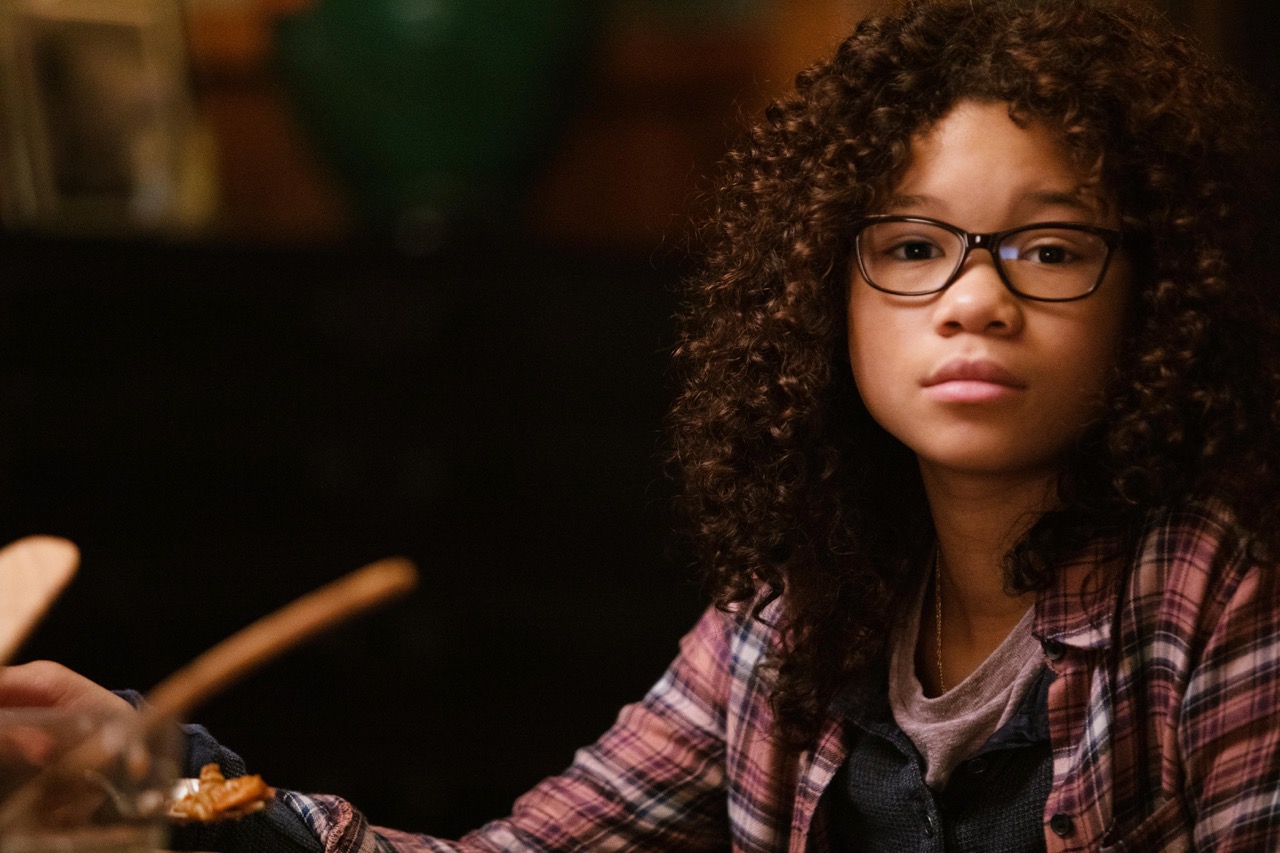 A Wrinkle in Time, Ava DuVernay’s adaptation for Disney of the children’s classic by Madeleine L’Engle, enacts a conflict between the popular drive toward “inspiring” stories and an artist’s wish to make something inspired. How this predicament plays out in the generally enjoyable, breezily disjointed story of Meg Murry (Storm Reid, a magnetic, grounding presence), a thirteen-year-old in search of her disappeared physicist father Alex (Chris Pine), is not easy to parse. To some considerable extent, L’Engle’s book hinges on the literal and metaphoric empowerment of its young heroine. By their own account, DuVernay and her screenwriters (Jennifer Lee and Jeff Stockwell, who scripted Frozen and Bridge to Terabithia, respectively) chose to emphasize that aspect of the material, and to enhance that choice with inclusive, multiracial casting. When she signed on, DuVernay became the first woman of color to direct a $100 million, high-stakes project, which is a matter-of-fact and clear cause for celebration. It also furthers the idea of a movie well-positioned to blow the culture’s inspire-o-meter right off its mooring.

One perk of being the nine-year-old for whom this wonky, fervid, frequently touching film was intended is the possibility of watching A Wrinkle in Time free of this burdensome context. The very young, at any rate, will be more disposed to the extreme leaps of faith on which the movie relies, and around which metaphor Wrinkle is organized. In a series of flashbacks, we learn that Meg’s father is a NASA scientist who disappeared while conducting research—in partnership with Meg’s mother, played by Gugu Mbatha-Raw—on a form of time travel called tessering. When we meet Meg as a young teen, her father has been gone for four years. Meg is an outcast at school, something we are meant to accept without much understanding. In the book, the lost, grieving Meg tackles a classmate to make herself feel better; in the movie, she bounces a basketball off the face of a standard mean girl who says unaccountably mean things. 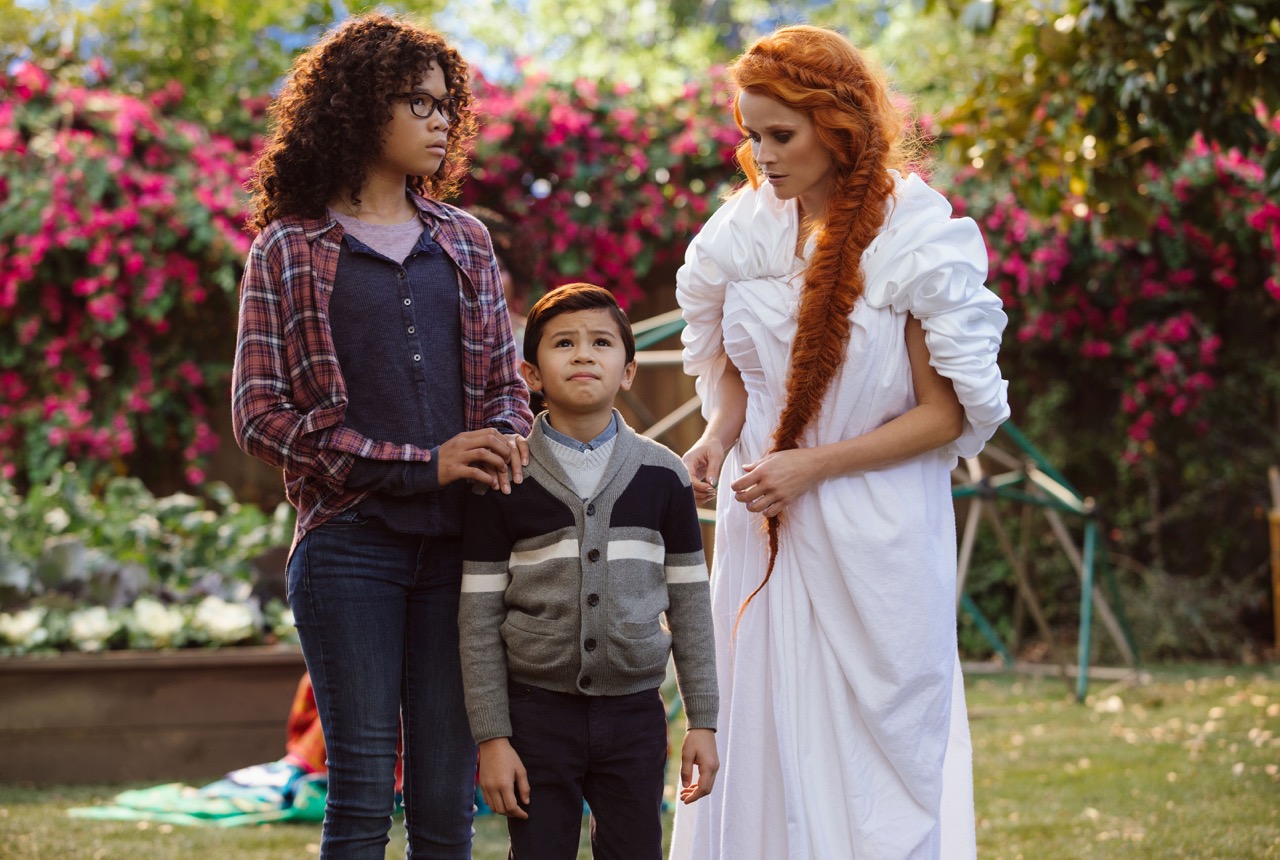 These early scenes have a warmth and ease that goes stiff the moment Mrs. Whatsit (Reese Witherspoon in a white taffeta toga and red Rapunzel wig) flounces into the Murrys’ living room. A new consort of Meg’s boy-genius little brother, Charles Wallace (Deric McCabe), Mrs. Whatsit and her fellow wise, wacky godmothers Mrs. Who (an underused Mindy Kaling) and Mrs. Which (Oprah Winfrey, living her best life in rhinestone-crusted brows and scaled up to ten times normal size) endeavor to help the Murry children retrieve their father from a far and very dark corner of the galaxy. The three Mrs. are masters in the art of tessering, and escort the children from planet to fantastic planet, an itinerary that includes a consult with the fussy Happy Medium (Zach Galifianakis). A cute boy named Calvin (Levi Miller) joins the adventure, and his presence helps smooth with a little human interest the film’s otherwise choppy progress through a thinly threaded series of events. A dreamy Sade track lands well, but Ramin Djawadi’s score feels pushy and rote, and the movie’s fairly basic CGI worlds prove surprisingly inert. As it did in Selma, DuVernay’s tendency to favor extreme close-ups, low angles, and off-kilter framing proves disorienting, and in this instance adds to an already considerable sense of alienation—from the characters, their relationships, the stakes, what it all might mean. 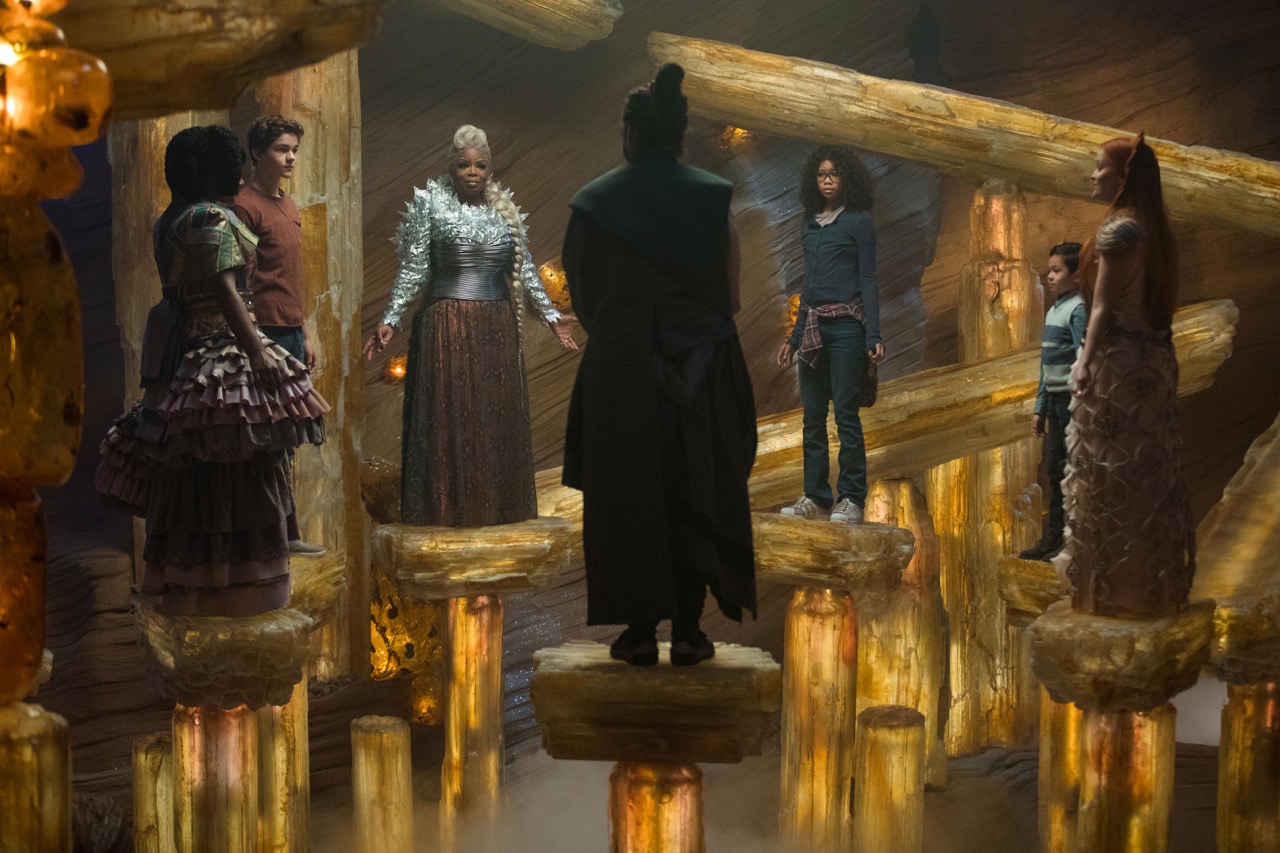 The cast of A Wrinkle in Time. Image courtesy Disney.

The movie comes by some of its confusions honestly. The book, which I tried and failed to read as a child, suffers from an excess of allegory. L’Engle’s themes—which include communism, free will, Christianity, science, nationalism, democracy, the nature and limits of language, and myths of patriarchy—have a distracting mix-and-match quality. Though engrossed in its various situations, rather than succumbing to a unified vision I found myself working to square L’Engle’s various explicit and implied conceptual positions. In one possible reading of the book, for example, feeling triumphs over thought: when the kids travel to Camazotz, where Alex Murry is held captive, the planet’s computer-like CENTRAL Central Intelligence Building is a place of terror, and IT, the seat of all evil, takes the form of an oversize human brain. IT seeks to replace individual, divergent agency with mindless, syncopated unison. Love is what Meg has that the calculating, all-knowing IT does not, and in the story’s climax she declares her love to conquering ends.

More persuasive than such dual configurations are moments when L’Engle complicates her characters: when Meg thanks the Happy Medium for making her mad, because anger blots out her fear; when she realizes that her father is not a savior but a man, “thin and white and not omnipotent after all.” The movie shies from such moments of complication, retreating to the narrative safety of a dimly conceived showdown between good and evil. All of which is padding around the main event: Meg’s becoming. That becoming is both a smaller and a bigger story than it might seem. It is something to watch with wonder, and to savor holding in mind the real kids and the actual transformation DuVernay’s heartfelt vision might manage, despite everything, to inspire.