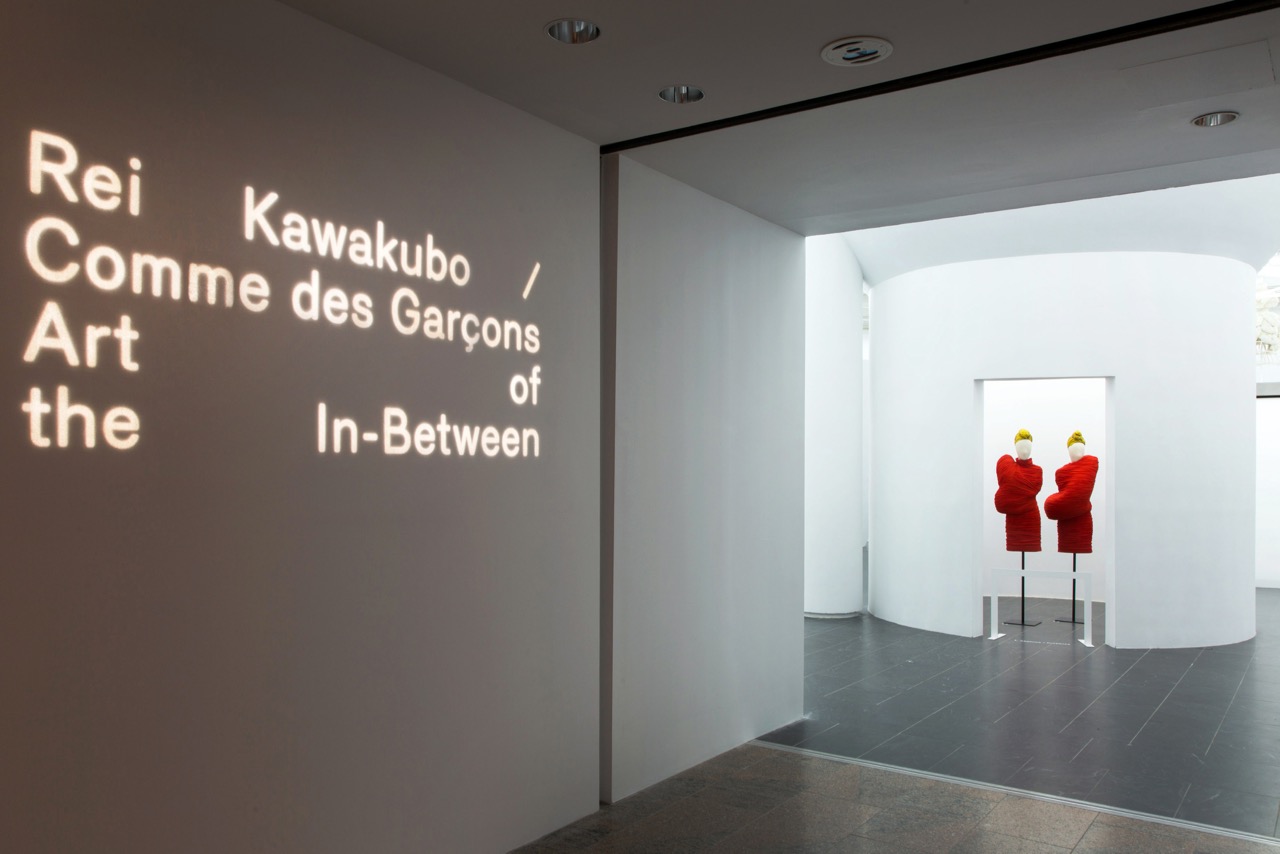 The question of whether fashion belongs in a fine arts museum has long haunted curators and audiences alike: Is it too commercial? Superficial? Silly, frilly, feminine? These objections have begun to erode as major museums, led by the Metropolitan Costume Institute, position fashion not just as a pretty sideshow or an emotional index of a historical moment (e.g., how hemlines reflected the Depression), but as a class of objects with complex formal, cultural, and narrative properties. Not surprisingly, attendance for fashion exhibits has exploded, yet the problem of fashion’s place within the hierarchy of fine and applied arts persists. Can fashion really be a rigorous artistic medium when a designer’s supposed first duty is to sell clothes to the rich rather than overturn aesthetic convention? Judging by the Metropolitan Costume Institute’s latest exhibition, Art of the In-Between, the answer is an emphatic yes.

The show—only the Met’s second to be dedicated to the work of a living designer—examines the work of Rei Kawakubo, whose avant-garde constructions for her label, Comme des Garçons, have continually challenged the norms and values that fashion holds dear: luxury, beauty, and even intelligibility. Since her 1981 debut in Paris, Kawakubo’s deconstructed assemblages have divided critics and vexed buyers, who have described her clothes as “unwearable,” “ugly,” and “Hiroshima chic” (because they look as if they’ve survived an explosion). Yet, thirty-six years later, this Japanese designer is rightly heralded as a global leader to whom almost every important contemporary designer is indebted—the sine qua non of experimental fashion. 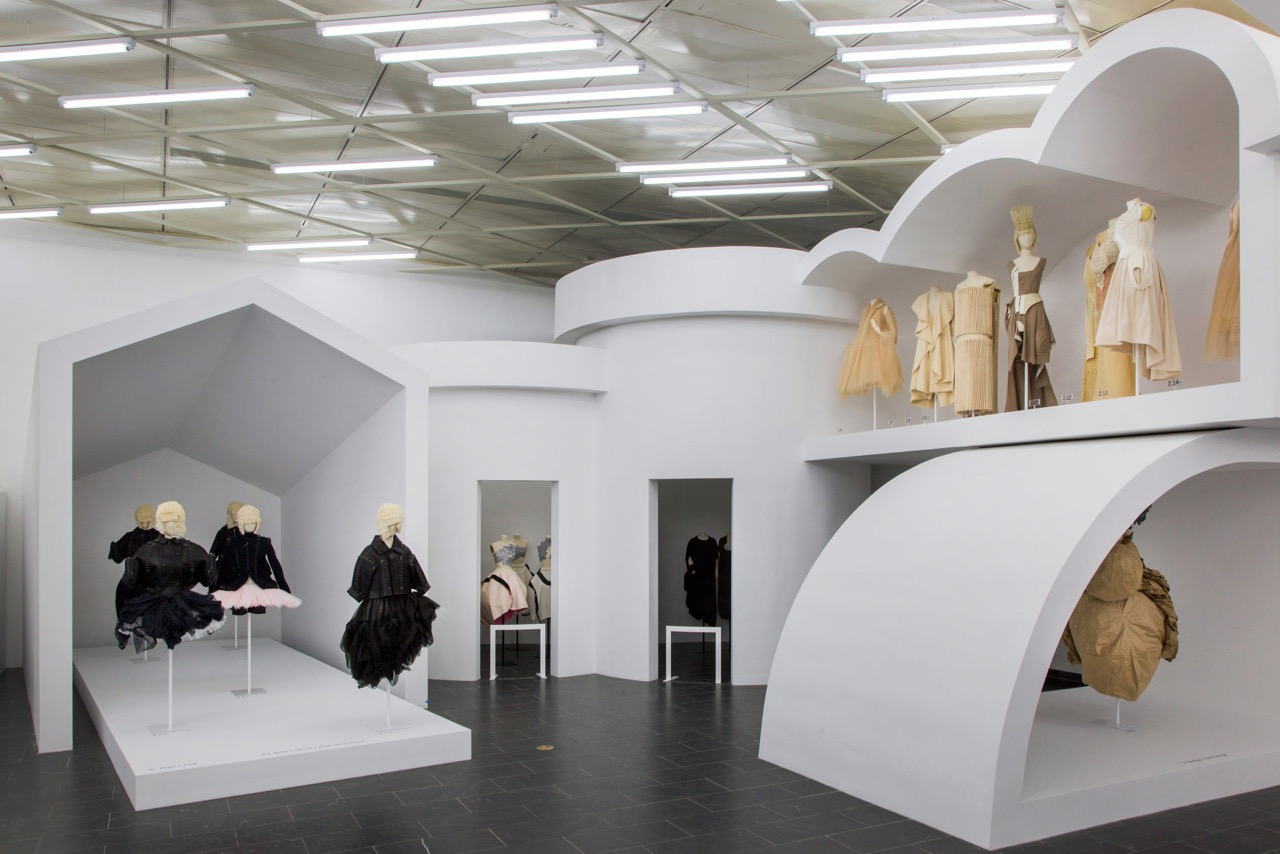 The first thing viewers will notice about Art of the In-Between is the space itself. For this exhibit, the Met, in collaboration with Kawakubo, has constructed a gleaming white labyrinth. Most fashion exhibits use spotlights to give garments a sense of shadowy grandeur; the Met’s paean to Alexander McQueen, Savage Beauty, employed this method to great advantage, highlighting the theatrical qualities of McQueen’s designs and runway shows. Kawakubo’s exhibit, however, feels like a downtown gallery; the lighting is bright, flat, and cold. Some three hundred fluorescent bulbs have been installed to create a brilliant and unearthly effect: the black shapes and saturated colors of the clothes pop against a background of crisp white cones, cubes, and twisting pathways. In shape and size, these structures are reminiscent of Richard Serra’s rusting hulks, but because they blend into the white floors and ceilings, they do not impose upon so much as guide viewers through the exhibit.

The all-white walls eschew any kind of decoration or explanatory text (which is instead provided in a pamphlet at the entrance), and visitors are free to wander in whichever direction they like. Kawakubo is infamously reticent, and the exhibit brochure likens her minimalist approach to Zen Buddhist koans: mu (nothingness), ma (space), and wabi-sabi (impermanence). For me, this absence of signage allowed a more direct communion with her garments; their abstraction came into focus and I felt freer to interpret them less as decoration and more as form. However, the lack of context also made it difficult to keep track of where I was in the exhibit, or to remember discrete displays. Ultimately, the show’s design favors aesthetic encounter over narrative.

The garments featured in Art of the In-Between span Kawakubo’s career, but are not arranged in strict chronological order. Instead, head curator Andrew Bolton and Kawakubo have grouped pieces according to dualistic themes, such as “Object/Subject,” “Design/Not Design,” and “Model/Multiple,” while a second half of the show, “Clothes/Not Clothes,” focuses on Kawakubo’s more recent collections. Sometimes, these binaries feel simplistic or repetitive: the titles, such as “Fashion/Antifashion” and “Design/Not Design,” are hard to conceptually distinguish. The curatorial notion behind setting up these binaries is for Kawakubo’s work to knock them down, but this move grows tiresome as the show progresses, and I came to suspect that Kawakubo’s designs will always refuse the boundaries of a category, so why bother attempting to contain them in the first place?

Highlights from the first half of the show include Kawakubo’s 1980s explorations in billowy, asymmetrical, and monochromatic silhouettes, which have become hallmarks of her practice. Though these garments are just as expensive and expertly made as the bejeweled gowns worn by celebrities on the Met Gala’s red carpet, visually they have more in common with Lee Bontecou’s canvas sculptures, with rough and unfinished seams, menacing shapes and colors, and a frequent disregard for the typical proportions of the body. Despite her refusal to flatter wearers, Kawakubo’s disciples are plentiful; in Japan, they are known as karasu, “the crows.” 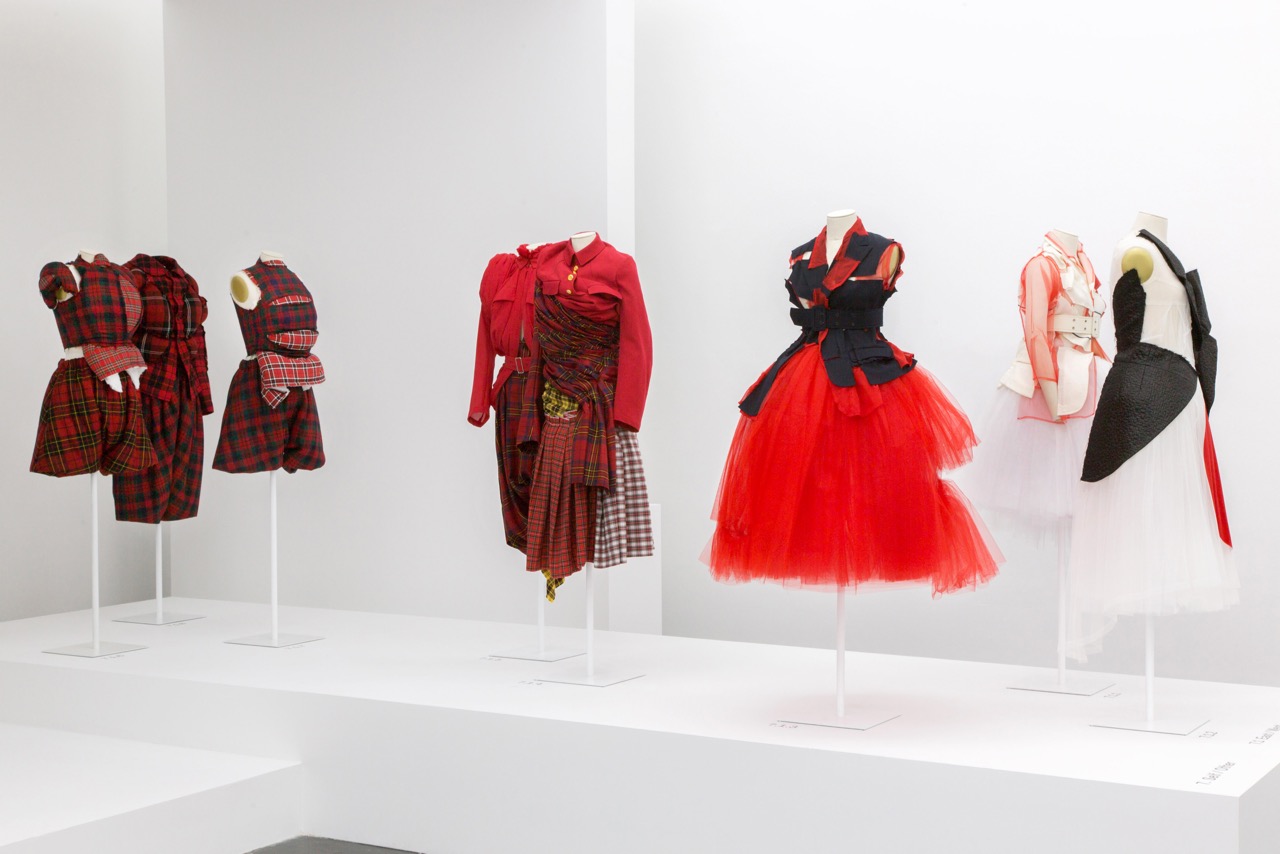 This portion of the exhibit also features Kawakubo’s later, and less trailblazing provocations against good taste: multi-tartan fetish-influenced getups à la Vivienne Westwood in “East/West,” and Kawakubo’s ode to biker ballerinas in “High/Low.” The bikers wear distressed leather jackets and sharp tulle skirts below, with barrister-style wigs whose curls appear to be wrapped around large toothpicks. Today, I see prospective students at the New School dressed this way, but in 2005, when the collection debuted, it felt fresh. That this streetwear-meets-ballroom aesthetic has been so completely absorbed by other designers is perhaps a testament to Kawakubo’s influence, but it also feels like a sign of commercial capitulation from a period in which she sought to make her work more “accessible.”

Perhaps the most significant display in this half of the show is Kawakubo’s spring/summer 1997 collection, Body Meets Dress—Dress Meets Body. For this line, Kawakubo created a series of cheery, solid-hued and gingham-printed dresses, tops, and skirts, made of nylon and padded with strange, downy protrusions. These pads bulge on the mannequins’ hips, stomach, or back, creating grotesque forms that alternately evoke disabled and maternal bodies. The collection subsequently formed the basis for Kawabuko’s collaboration with Merce Cunningham: Scenario, a dance performed at the Brooklyn Academy of Music that same year. As I watched recordings of dancers writhe and tumble on stage, I could see how Kawakubo’s radically alien shapes reimagine the way a person can move through space, undermining the notion of a dancer’s body as perfect, natural, or whole. 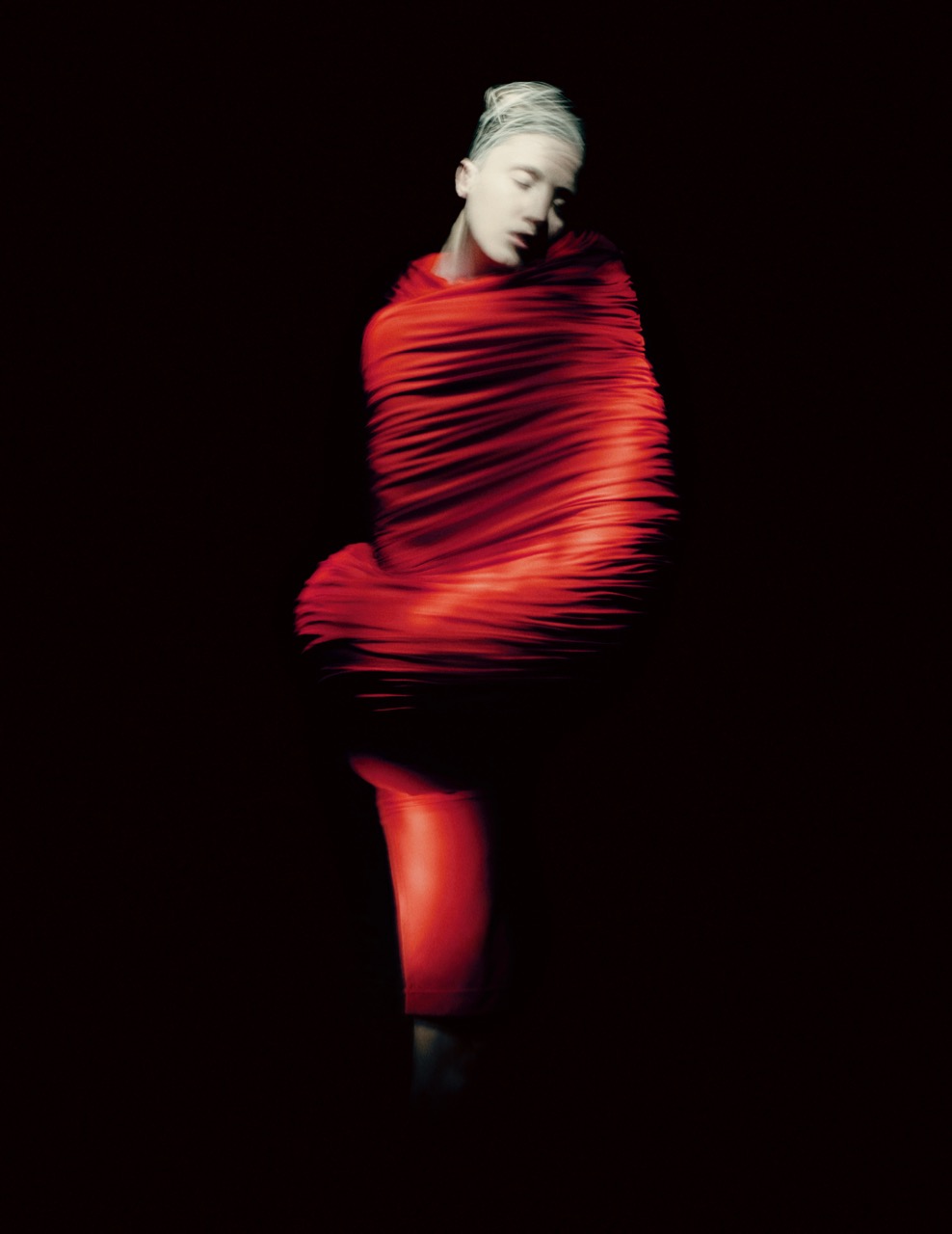 The exhibit hits its stride in “Clothes/Not Clothes,” a spread of recent efforts Kawakubo terms “objects for the body.” Many of her designs utilize industrial or “trashy” materials—synthetic taffeta, stretch polyester, polyurethane—but Kawakubo’s past few collections have begun to explore the outer limits of materiality. One piece appears to be a gigantic brown paper bag, crumpled into a ball. Another display features two mannequins clad in bulbous forms without armholes, which vaguely resemble packing peanuts made of fuzzy drier lint. On their heads sit wigs constructed of steel curls inspired by Brillo pads. Reaching a new level of formal experimentation and abstraction, these stand out as some of the strongest pieces in the show. By this point, the question of functionality is long forgotten. You are in the world of Comme des Garçons: spaceship, freak show, utopia. 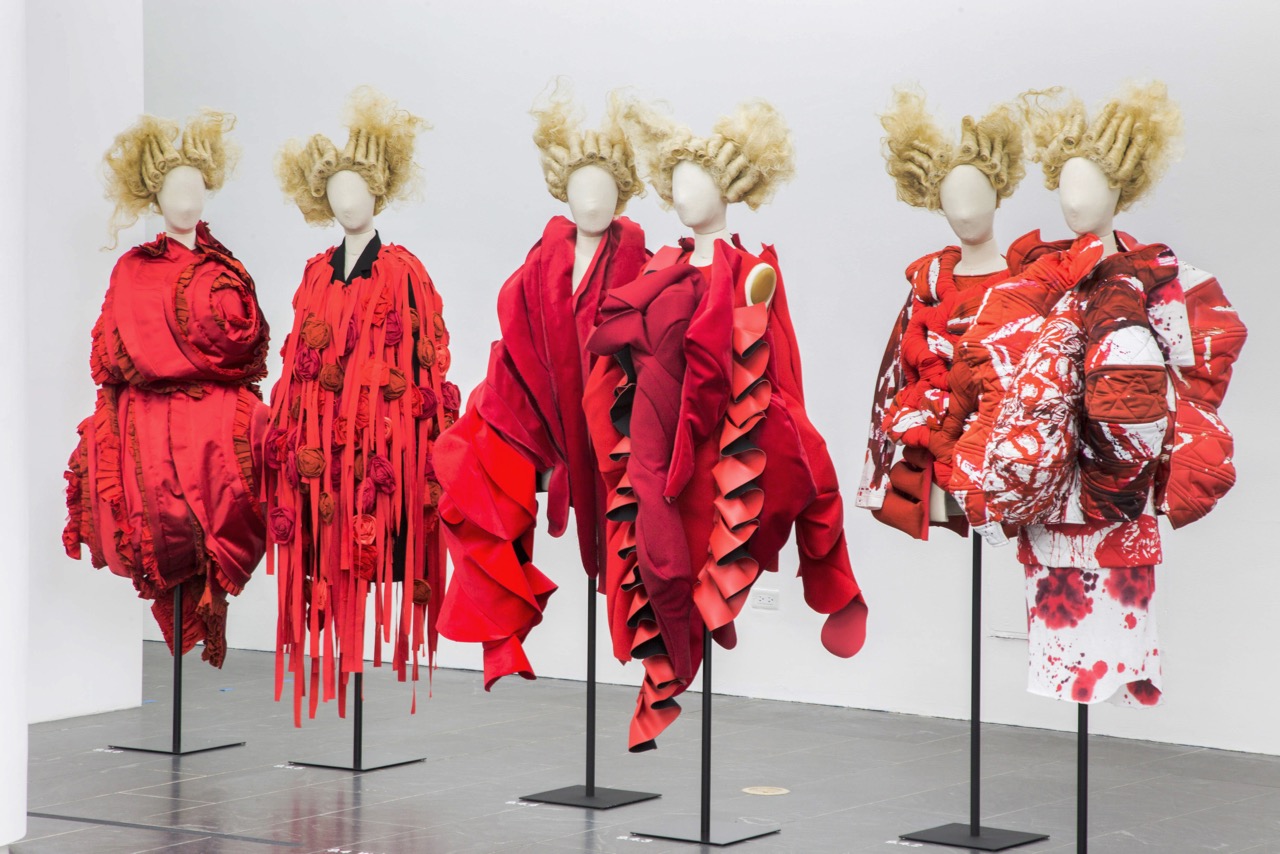 Kawakubo’s is a singular vision, and the continuity of garments and exhibition design creates an impression of immersion and immediacy rarely achieved in fashion curation. Exiting the Met’s white maze in a kind of fugue state, one’s eyes have to adjust to the dimmer lights of reality, but a feeling remains, as if the distinction between clothing and sculpture, fashion and art—even between self and other—were beginning to melt away.

Daniel Penny is a critic, journalist, and poet with an MFA in creative nonfiction from Columbia University. His writing has appeared in Boston Review, the New Republic, The New Inquiry, The Rumpus, The Village Voice, Slice Magazine, and others. He teaches writing at Parsons and Columbia. You can follow him @dwpenny.