Todd Phillips borrows some Scorsese for a franchise origin story. 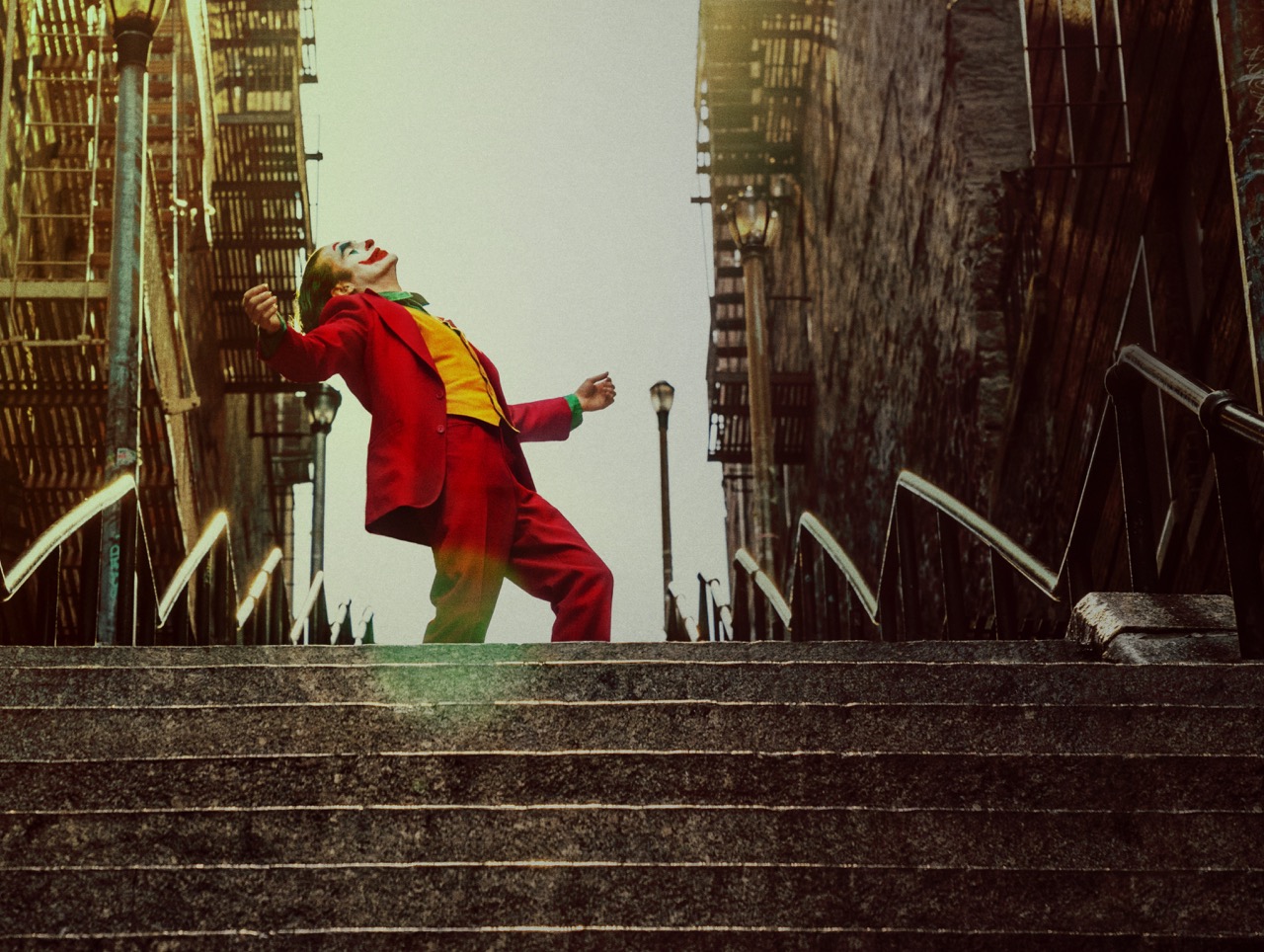 The birth of the modern Joker cult can be dated to 2008, with Christopher Nolan’s The Dark Knight, and its spastic performance by Heath Ledger, who had died shortly before the film’s release, as Gotham’s Clown Prince of Crime. Ledger’s Joker was given an abundance of screen time in which to articulate his personal philosophy, a recklessly violent strain of “Do what thou wilt” carnival anarchism; Nolan cited Fritz Lang’s mad criminal mastermind Dr. Mabuse as an influence. Unusual among supervillains, Mabuse is not a killable mortal being but a viral idea, a mantle to be passed from person to person, Mabuse to Mabuse. And while Nolan’s grim, lumbering film is no more interesting today than it was a decade ago, the virality of its Joker has made for a lively extra-cinematic phenomenon, the character becoming a lodestar for Gamergate radicals, TikTok role players, SoundCloud rappers, and a menagerie of other fascinating freaks. 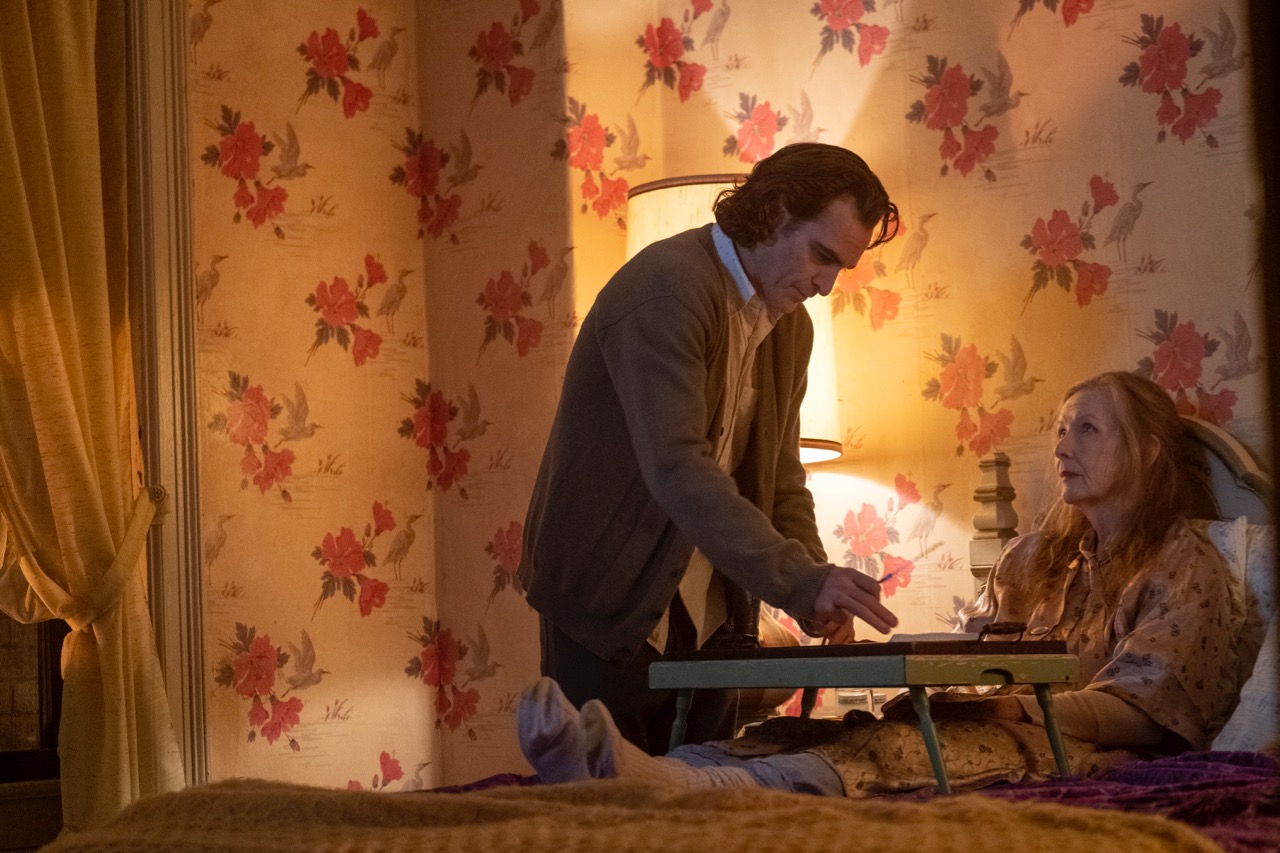 So, courtesy the inevitable logic of franchise metastasis and “cinematic universes,” we have Todd Phillips’s Joker. The film slowly tracks star Joaquin Phoenix’s eventual assumption of the title role. When first encountered, he is a nebbish named Arthur Fleck working as a rent-a-clown and living with his unhinged mother (father is unknown) in a Gotham that in almost every respect resembles the foundering pre-cleanup New York City of the popular imagination. Rather than the system-minded Lang, Phillips takes as his model Martin Scorsese’s immersive dramas of urban anomie and alienation, particularly Taxi Driver (1976) and King of Comedy (1982). The first fully Joker-centric film—I don’t deceive myself in imagining that it will be the last—Joker puts Phoenix on-screen nearly constantly, as Robert De Niro was in those two Scorsese movies. De Niro himself is on hand here as Murray Franklin, a late-night chat-show host who’s a sort of amalgam of Merv Griffin and “Stupid Human Tricks”–era David Letterman. 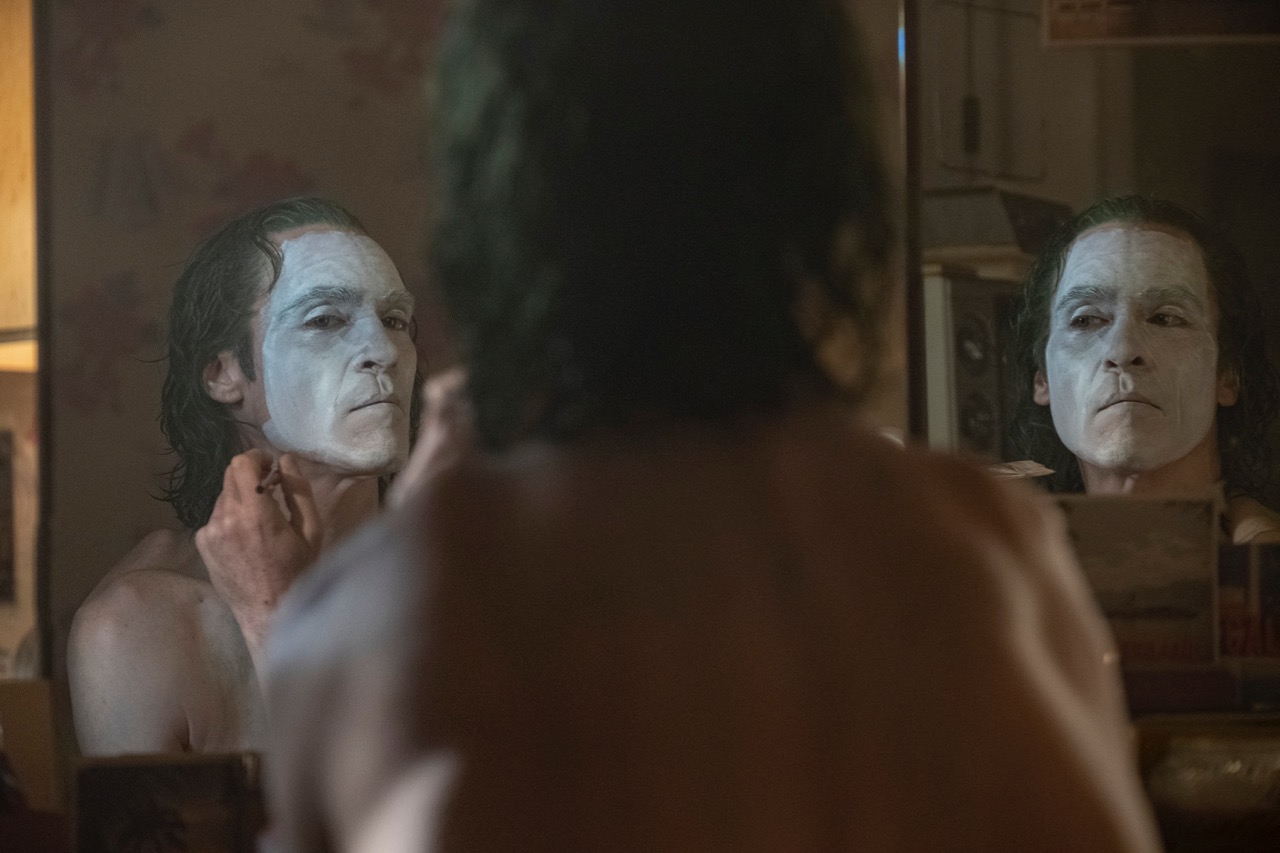 An aspiring stand-up comic, though his own act is doomed by incompetence and a susceptibility to painful fits of pathological laughter, Arthur looks to Franklin as a surrogate father figure and career role model. The alignment of the spectator with Arthur’s viewpoint extends to our sharing in his delusions, including daydreams of stardom with Franklin and a transparently telegraphed twist involving a budding romance with a neighbor played by Zazie Beetz. Our near intimacy with Arthur also allows for an intensive study in the eccentric architecture of Phoenix’s torso: hunched shoulders, pale skin clinging to a barrel ribcage on an emaciated frame, long arms that seem to protrude Ingres-like from the wrong angles. Phoenix is a full-body actor, and Phillips highlights him as such, making room for a number of dance idylls that include slow sways, spastic soft shoes interrupted by pelvic thrusting, and gnarled tai chi reveries. In fact, the film operates under the belief that anything that works once will go over even better the tenth time, and this repetition of effects blunts impact. As such, nothing lingered on here makes the impression that, say, Phoenix’s ecstatic nightclub breakdance in James Gray’s Two Lovers (2008) or his folded-in postures in Paul Thomas Anderson’s The Master (2012) do in a fraction of the screentime. 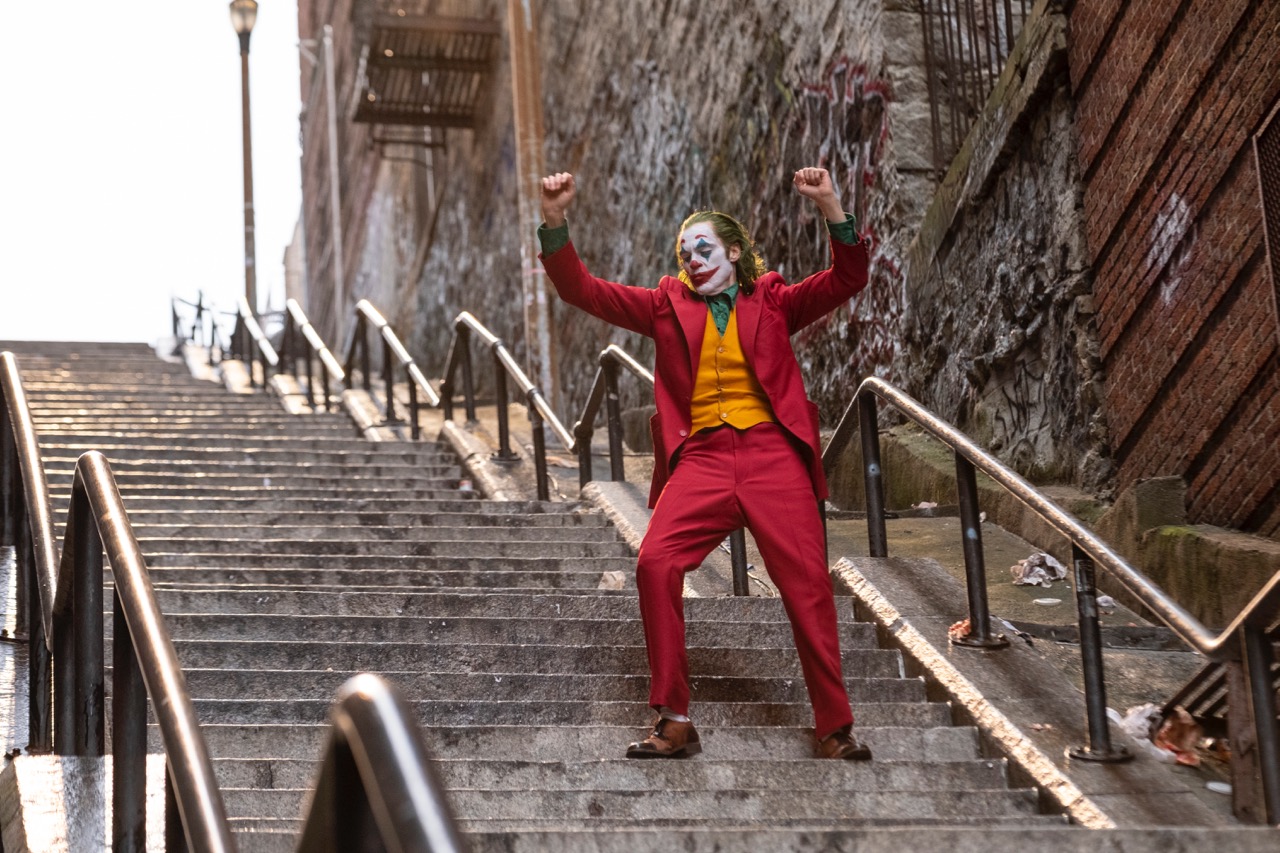 This isn’t to denigrate Phillips by comparing him to highbrow-auteur directors, but to note that his highbrow-auteur phase is, thus far, the least interesting of his career, which began with nonfiction studies in what is now fashionably called toxic masculinity (1993’s Hated: GG Allin and the Murder Junkies, 1998’s Frat House), and continued through raunchy, crowd-pleasing studio comedies centered on, essentially, the same subject matter (2003’s Old School, the Hangover trilogy). Joker marks Phillips’s second dip in the shallow end of the prestige pool, and while it improves on the first, War Dogs (2016), a dismal dark comedy concerning arms dealing, it’s likewise afflicted by shopworn pop-music cues: here Cream’s “White Room” and Gary Glitter’s “Rock & Roll Part 2.” (Better is the original score by cellist and composer Hildur Guðnadóttir, which conveys the palpable feeling of a world teetering on the brink.) 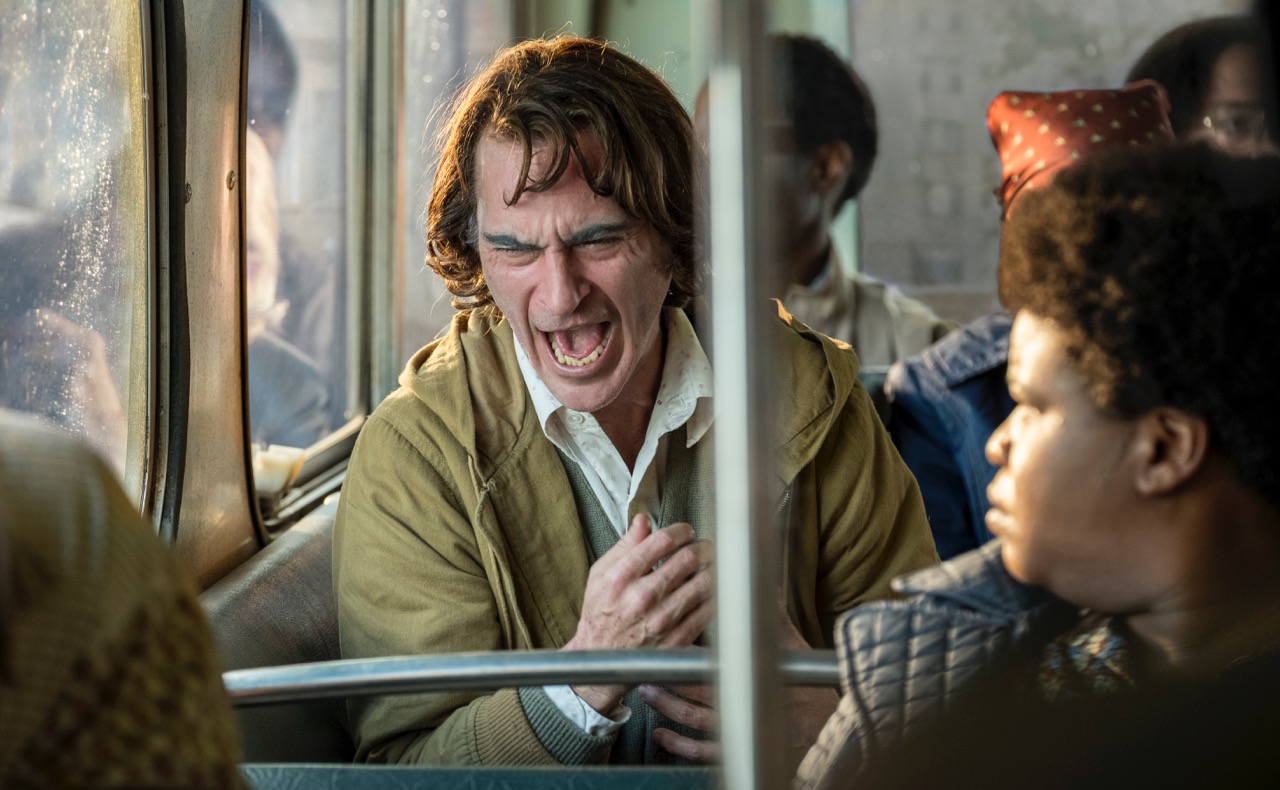 Early Joker ballyhoo provided occasion for much journalistic hand-wringing over the prospect of the film as a “What Is to Be Done?” for the incel set, a risk for inspiring open rebellion among the unlettered rabble, whose potential adverse reaction to even a whiff of moral ambiguity preoccupies the chattering classes, who know such volatile concepts are best kept safe in graduate-level seminars. Actually, Joker’s au courant radicalism is directed principally toward the moneyed elite, exemplified by Franklin and another media figure, Thomas Wayne (Brett Cullen), father of the boy-who-would-be-Batman—the urban patrician conception of the elder Wayne suggests something like Nelson Rockefeller, while his casual reference to the disgruntled underclass as “clowns” mirrors Hillary Clinton’s “deplorables.” Arthur is a victim who has fallen through an increasingly frayed social-services safety net, and his rankling rage is grounded in class resentment rather than the racial and sexual hang-ups that plague, for example, a Travis Bickle. (Joker, like James Mangold’s 2017 Logan, is an “adult” comic-book movie, but like all such movies remains essentially sexless.) The inciting incident that sends Arthur off the deep end is a kind of Bernhard Goetz–in-reverse confrontation on the subway, in which the greasepainted by-the-hour Bozo guns down three drunkenly belligerent stockbrokers, one with an Eric Trumpian physiognomy, after they droogishly serenade him with “Send in the Clowns.” 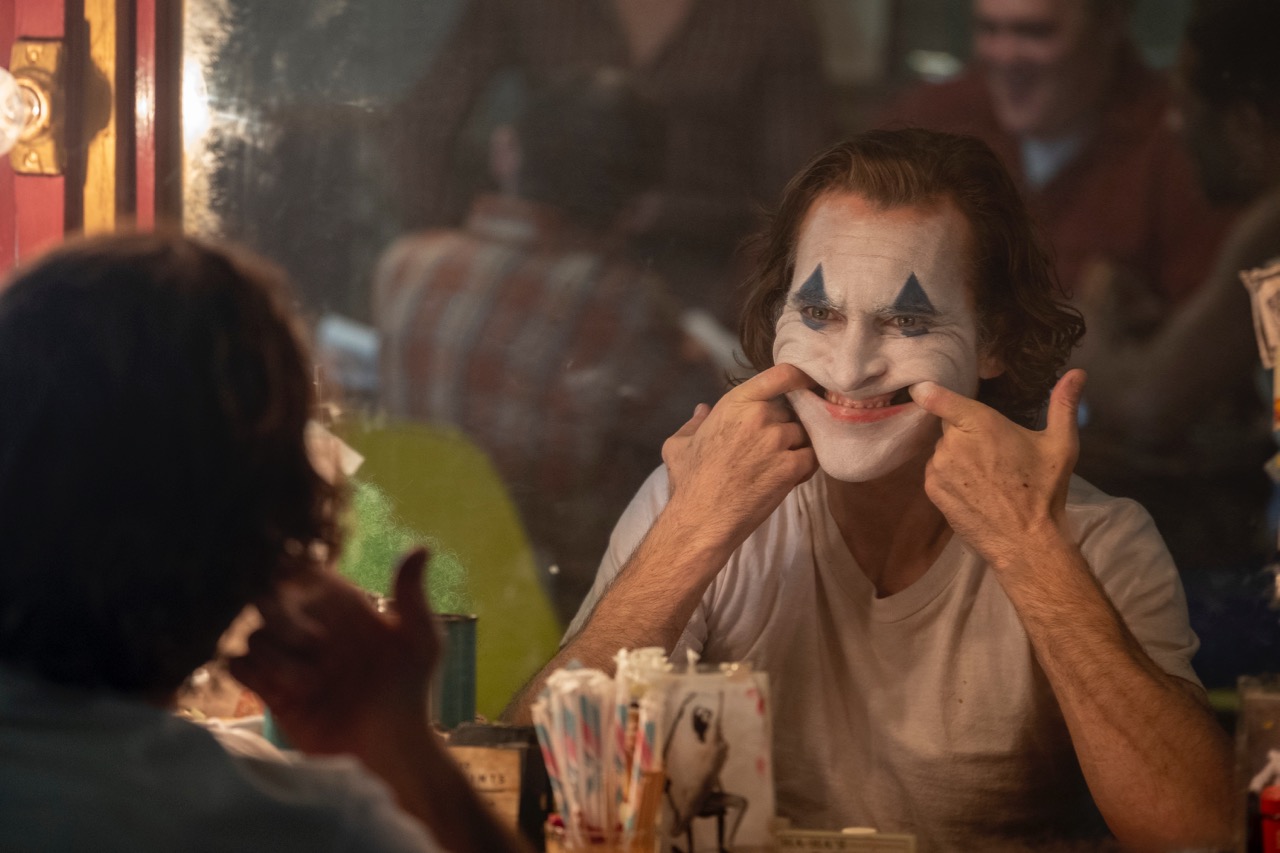 Where earlier in the movie Arthur’s subjective delusions and exterior reality are muddled, they finally coincide as his madness metastasizes into the outside world, his outcast’s fantasies of power and potency finding ultimate expression as Arthur becomes Joker, emerging as a hero to the fed-up lumpenproletariat. This metamorphosis serves the purposes of multifilm architecture, though makes little dramatic sense; there is nothing in Joker to suggest Arthur as a leader of men—and, by the looks of things, exclusively men—as a figure of unusual charisma or intelligence. Stringy-haired, wearing itchy polyester slacks and an assortment of dun-colored cardigans, Phoenix’s Arthur is from first appearance far gone, something like a Crispin Glover grotesque—and his confrontation with Franklin on live television plays like Glover’s combative 1987 Letterman appearance taken to its extreme conclusion. (The weird Letterman appearance is a storied tradition, participated in by Harvey Pekar, Harmony Korine, and Phoenix himself.) 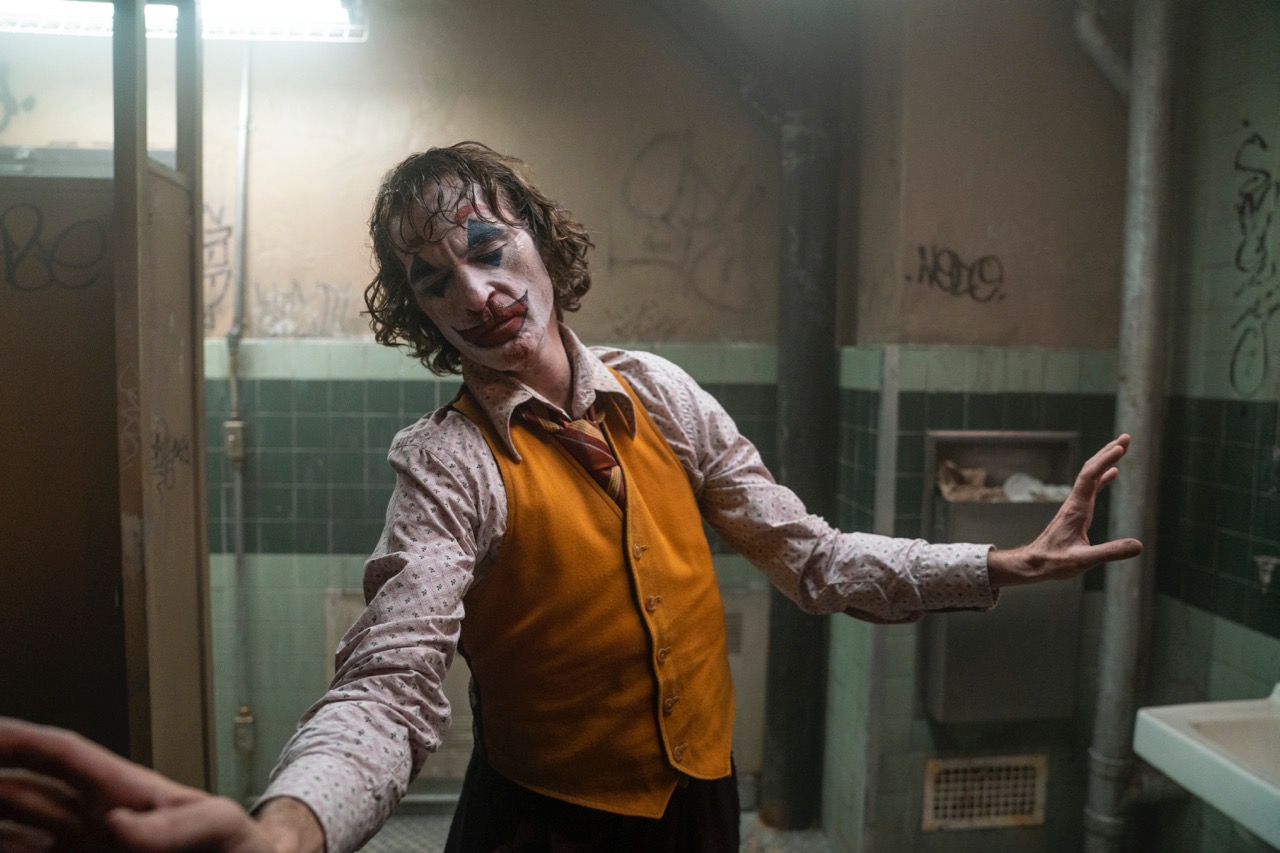 The face-off between Joker and Franklin, between outsider animus and insider smugness, embodies the tension at the heart of Joker—a film that takes on the nigh-impossible task of smuggling transgressive underground danger into a contemporary, risk-averse multiplex tentpole package. (Years ago, Phillips commissioned the poster art for Hated from very real killer clown John Wayne Gacy.) Most of the time this danger finds expression through the hoariest clichés of encroaching mental illness, including diary-of-a-madman composition books filled with a looping, loony, misspelled scrawl and creepo collage art. Some true triumphal madness is achieved during the last act Walpurgisnacht in the streets of Gotham, but it’s mitigated by the logic of cinematic universe-building, and the knowledge that order must and will be restored. Our anger, too, must today be made subservient to the law of the franchise—it is to the insufficiency of this that the off-script amateur cult of Jokerdom perhaps subconsciously responds, remaining far more potent and petrifying than any mere scenery-gnashing screen jester.