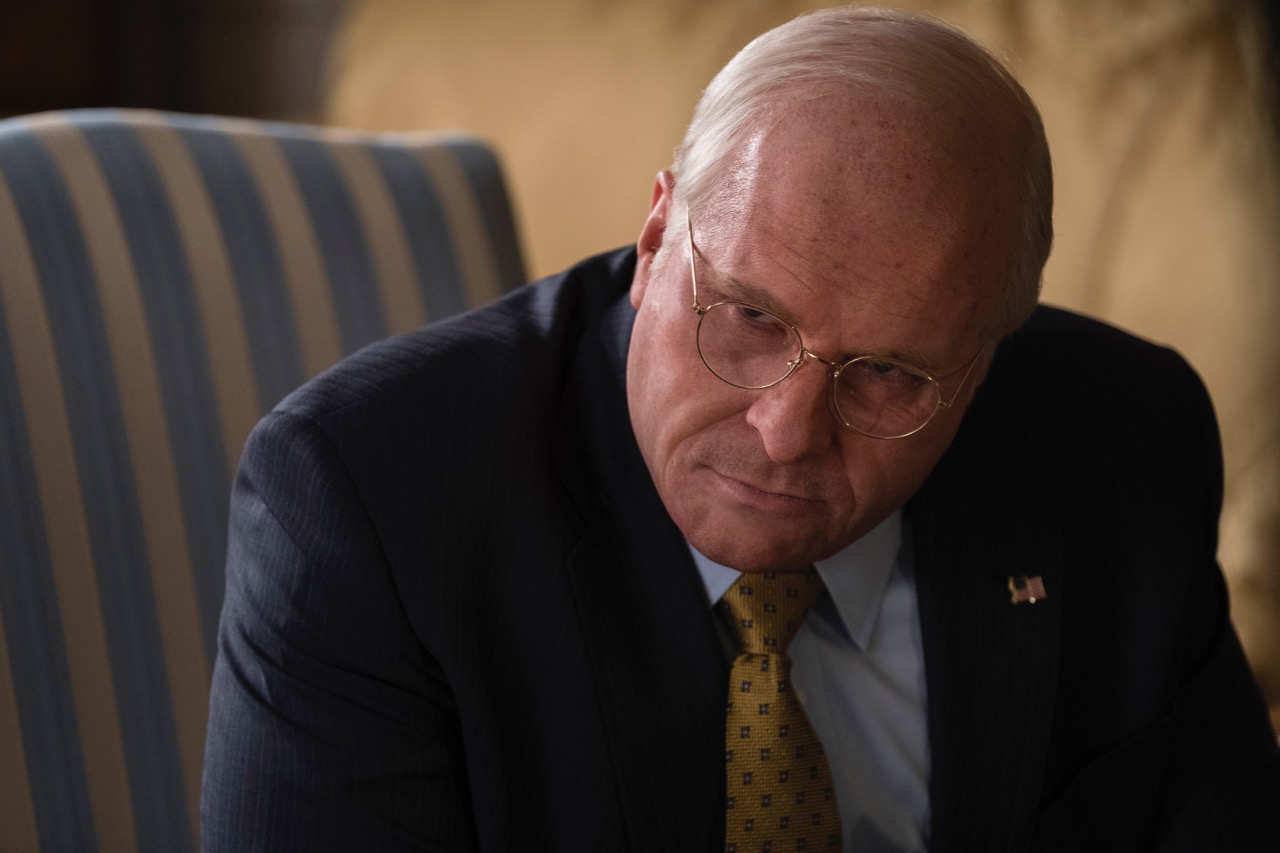 The idea shared by the political feature films of Adam McKay, represented to date by 2015’s The Big Short and now Vice, his Brechtian burlesque of the life of Dick Cheney, is that the pressing problems of the republic are really not that complicated. Though a professional caste of power brokers has a vested interest in obfuscating such matters as the theory of the unitary executive and tranches, so to bore the defrauded public out of their outrage, in fact all of this can be easily demystified with concrete examples put across in layperson’s language with a touch of humor, theatricality, or sex. “Wall Street loves to use confusing terms to make you think only they can do what they do,” goes a piece of narration in The Big Short, just before introducing Margot Robbie in a bubble bath to explain subprime loans in short words we punters can understand, the idea being that the bored and horny commoner who glazes over during any discussion of finance will be riveted by a nude Aussie sipping champagne in the tub.

Vice—which follows Cheney from his days as a ne’er-do-well freshly flunked from Yale racking up DUIs in Casper, Wyoming, to his installment in the corridors of power—likewise breaks through a plenitude of fourth walls, some in the West Wing, and boasts a quite chatty narrator, played by Jesse Plemons. He’s an average guy seen with his perfectly average family in a perfectly average suburban home where he expresses perfectly average interests in the Pittsburgh Steelers and SpongeBob SquarePants, his obscure connection to Cheney concealed until a last-act payoff.

First encountered drunk and disorderly and stained with his own sick, Cheney seems very little destined for greatness himself—until his wife, Lynne, hands him an ultimatum that straightens him out not for the last time. Dick and Lynne are played, through the whole half-century covered by McKay’s film, by Christian Bale and Amy Adams; Bale also appeared in The Big Short. Returning too from that film is Steve Carell, here as Donald Rumsfeld, Cheney’s mentor during his first congressional internship and his coconspirator in the Bush, Jr. White House. A technically brilliant actor, Bale has packed on the requisite poundage and developed a recognizable impression of Cheney—the bulldoggish brood, the brusque delivery from one corner of the mouth, as though the other is occupied gnashing a hunk of flesh from a gravely wounded foe. In his maturity as an actor, Bale has been limited by his intrinsic isolation and aloofness, but it cannot be said that such qualities are a hurdle in playing this awkward, terribly secretive, and often tight-lipped man. 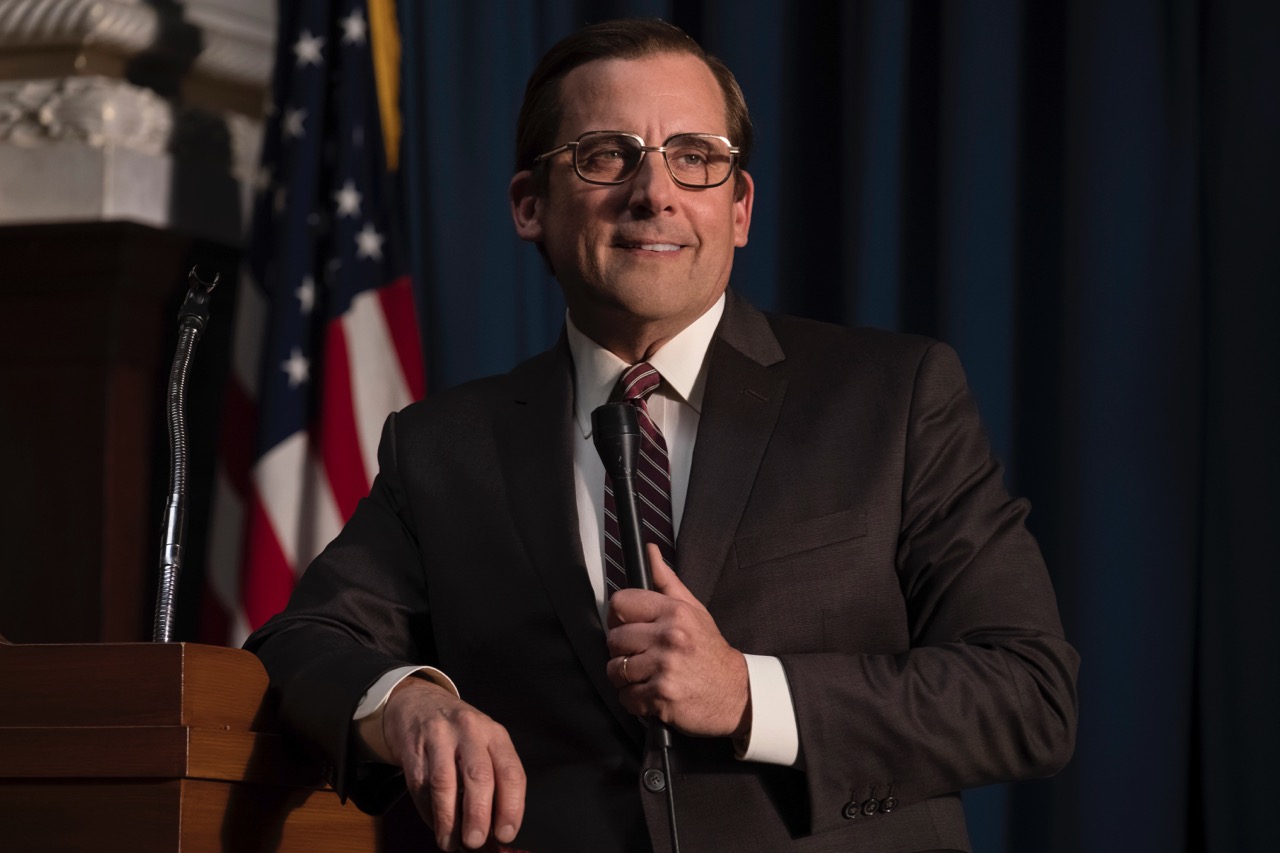 McKay’s approach to his material is anything but taciturn, pocking the surface of his story with stylistic ruptures. He makes use of Eisensteinian intellectual montage, as when Cheney secures the promise of a historically powerful vice presidency from his running-mate-to-be, George W. Bush—Sam Rockwell, tweaking his gormless hillbilly act from Three Billboards Outside Ebbing, Missouri (2017). Cheney’s establishing his dominion over his ostensible future boss is matched to images of his favorite pastime, fly-fishing, the idea being of course that he’s reeling Dubya in. In a former life McKay was a Saturday Night Live writer and director of the daringly dumb comedies Anchorman: The Legend of Ron Burgundy (2004) and Step Brothers (2008), and many of his formal feints in Vice are essentially played as punchlines, like the premature credit roll that envisions a life in which the Cheneys had retired from public service after Dick’s run as George H. W. Bush’s secretary of defense. 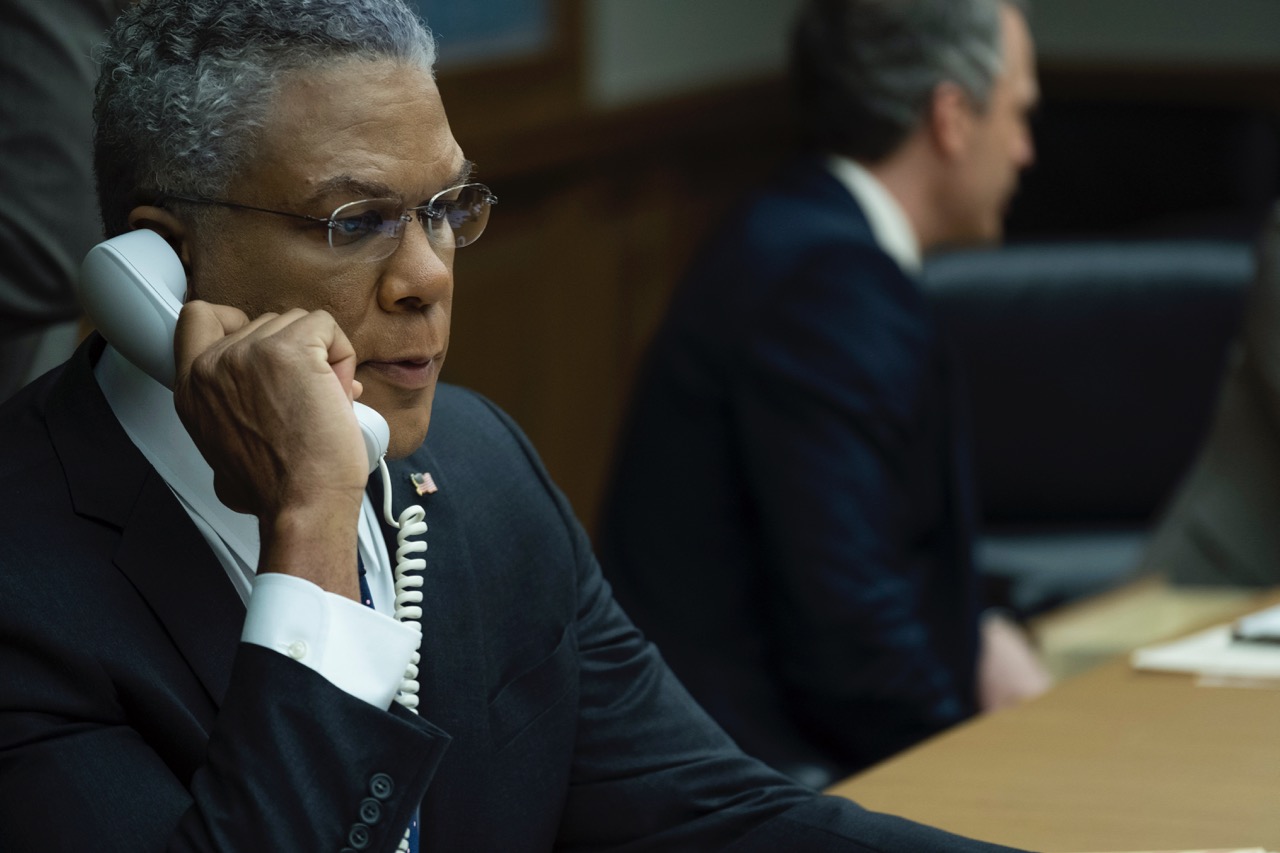 Now, humor is a fickle and subjective thing, but for the record, I laughed aloud exactly once while watching Vice, at the moment when Tyler Perry first appeared in the role of Colin Powell. More often the film is only embarrassing in its flinging about for novelty, the identifiable low point being a scene that imagines Dick and Lynne openly expressing their will-to-power in iambic pentameter, a burlesque of the Shakespearian soliloquy.

It’s a clumsy, loveless pastiche that plays to an assumed viewer who thinks that old-timey talk is weird and funny—a sharp contrast to the attitude of Orson Welles, a fiercely political artist who took great pains to bring theater- and cinemagoers a vivid, contemporary Bill Shakespeare, well knowing that this quintessentially Elizabethan artist could be vital to understanding modern power and its corruption. And where Welles had William Randolph Hearst as a model for his Citizen Kane, McKay has Fox News’s Roger Ailes (Kyle S. More) to play with, first viewed floating the idea for a conservative news network while working in the Nixon White House, and later identified as a key player in the conspiracy to turn public opinion rightward, alongside megadonors and conservative think tank–sponsored market research. 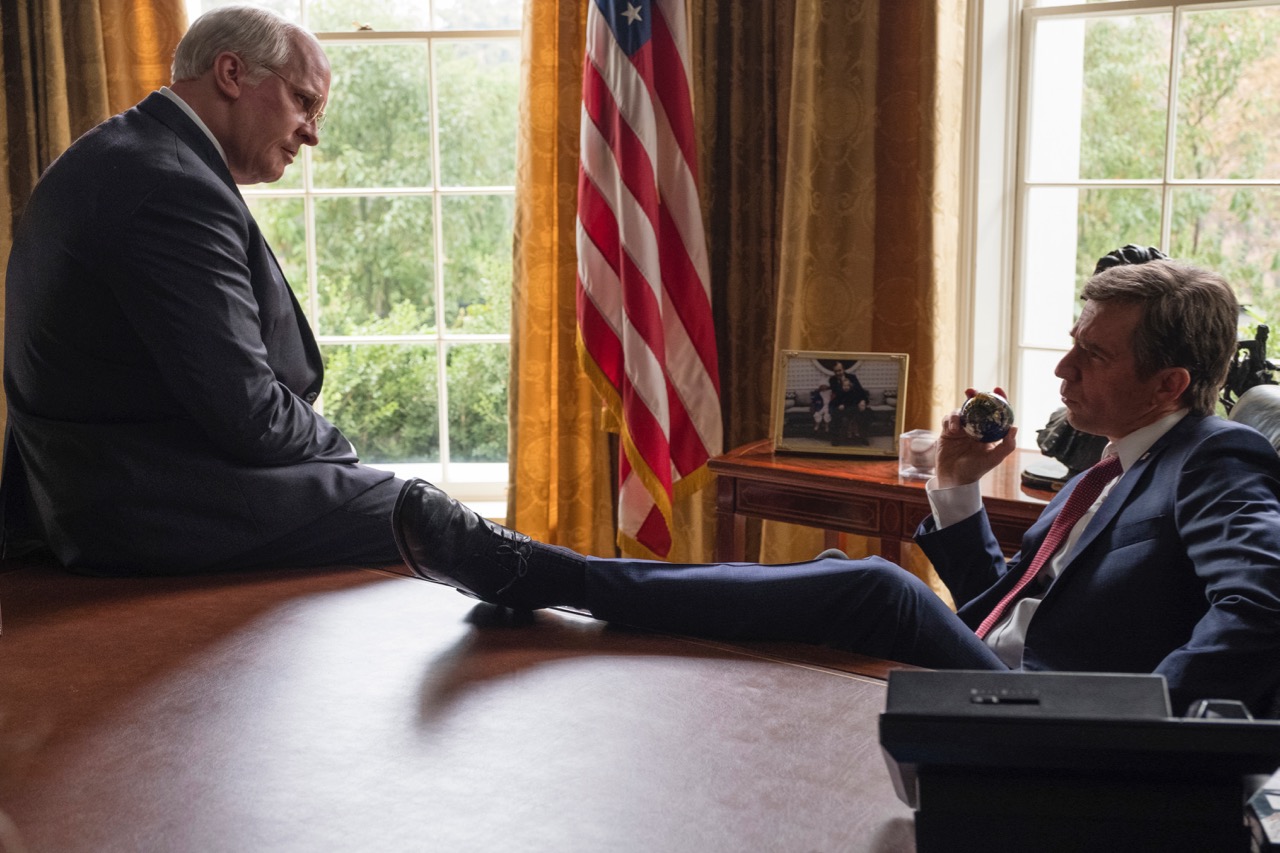 McKay isn’t trying to operate on Welles’s level. His competition is Fox News—and he’s made a movie intended to pack a propagandistic, propulsive force. But while McKay’s conviction that very simple cause-and-effect explanations exist behind the expert language of government doesn’t necessarily diminish his work as a polemicist, he is hobbled as an artist by the fact that the same simplicity—simplemindedness, even—governs his dramaturgy and depiction of human relations. Every character in Vice can be understood in a sentence: “He wants to impress his father more than anything,” Cheney intuits of Bush II, and nothing the film shows us suggests anything more. And every scene in the film is a vessel designed to carefully deliver that scene’s one idea and one idea only: Cheney as protective family man, Cheney as vindictive climber. (A final, self-justifying direct address from Dick acts only as an afterthought, throwing “moral complexity” into the shopping cart while in the checkout line.) This is not what you’d call a multivalent text; no one can see Vice and fail to take away its basic concept: Cheney was the power behind Bush, Lynne Cheney was at least occasionally the power behind Dick, the Koch brothers are fucking all of us over. 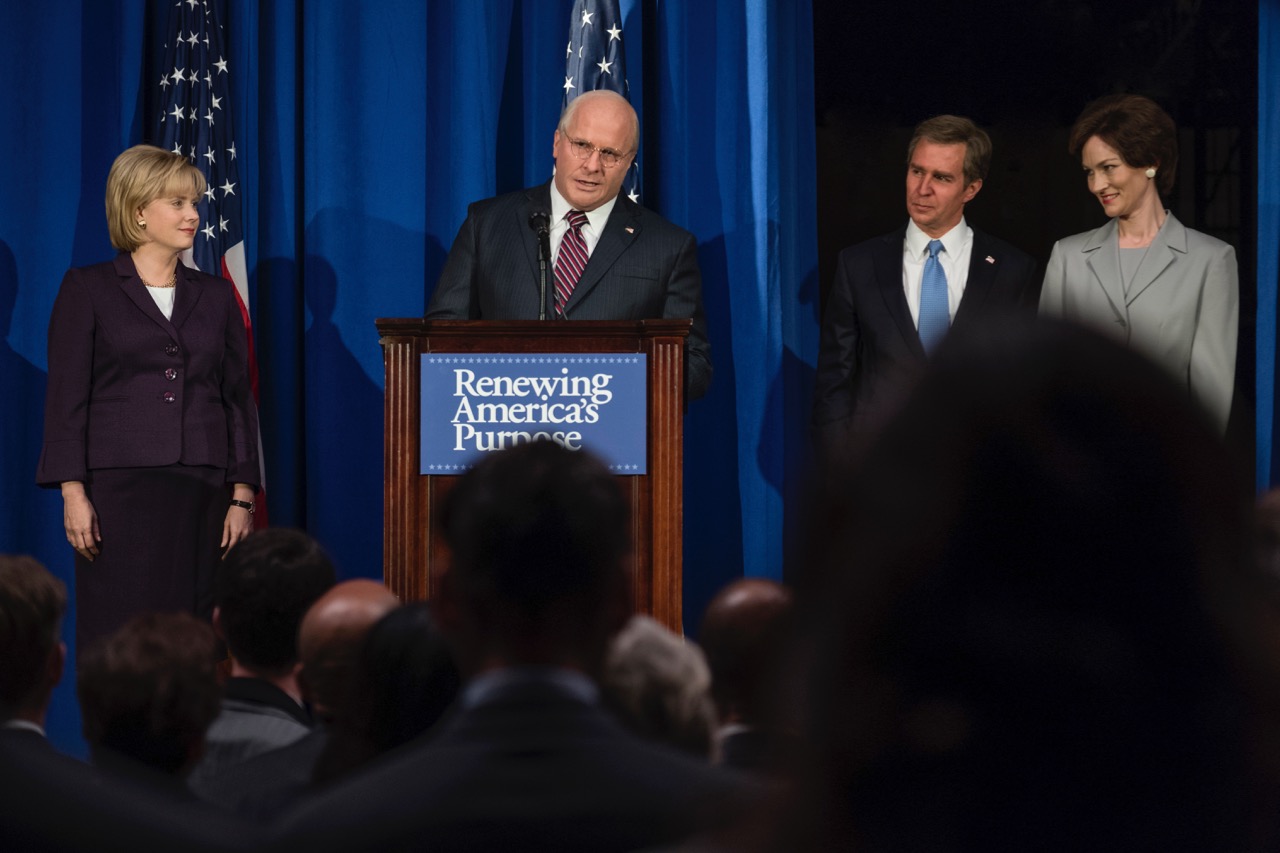 Perhaps true and, if you’re reading this, quite possibly what you thought already, for ours is a narrowcast world where we accidentally trip over very few artworks and ideas we’re not predisposed to be at ease with. There remains nevertheless a nostalgia for an ideal of lost cultural unity that causes film reviewers to talk about this or that movie “we desperately need right now”—the “we” of course being a prescriptive that means “you, the great unwashed.” Speaking only for myself, I don’t respond well to jes’ folks’ plainspoken come-ons, and I don’t need a pat, self-defining cinematic experience like Vice any more than I need someone to cut my food into bites.