The Berlin-based artists explore the problems and potentials of
backward movement. 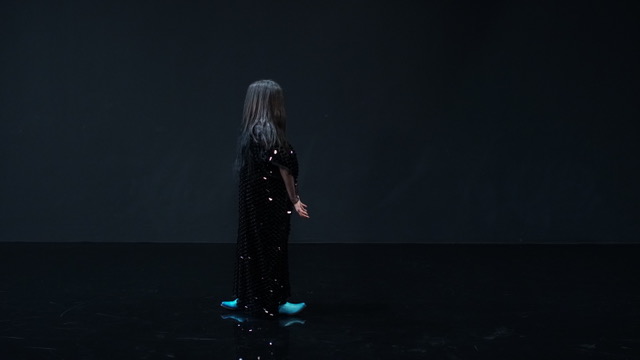 Legendarily, women fighters from the Kurdish mountains of northern Syria would sometimes wear their shoes backward in order to confound trackers. It’s an elegant if simple technique, distressing in its acknowledgment of vulnerability as these guerrillas are picked off person by person, yet powerful, too, as an act of resistance, even defiance. This gesture of “tactical ambivalence” and of “turning disadvantage into a tool,” as Berlin-based artists Pauline Boudry and Renate Lorenz put it, provides both a lesson and a kind of score or instruction for Moving Backwards, their installation currently on show at JOAN in Los Angeles. (It was previously seen, in a slightly different configuration, at the Venice Biennial’s Swiss Pavilion in the summer of 2019.) Boudry and Lorenz read backward movement in broad ideological terms, taking sharp notice of the political and social regressions of our age. But, inspired by the Kurdish women fighters, they also explore how it might serve as a practice of what the Anishinabe writer Gerald Vizenor has dubbed survivance: survival and resistance.

The word “installation” is used advisedly here: the work’s primary element is a floor-to-ceiling screen onto which is projected a looped twenty-minute film featuring five dancers, matched to a pulsing soundtrack that blasts from a pair of humongous speakers, barely visible in the darkened gallery. Other elements, though crucial to the work’s overall staging, initially seem incidental. They include a black-Marley-covered wooden platform, a discreet display of props, and a newsprint journal of letters on the subject of moving backward written at the invitation of Boudry and Lorenz by an international array of artists, theorists, and activists (most are queer and/or gender nonconforming; their missives datelined Berlin, Tehran, Berkeley, Qamishli, São Paulo, Mumbai, Cairo, Paris, Los Angeles, etc.). 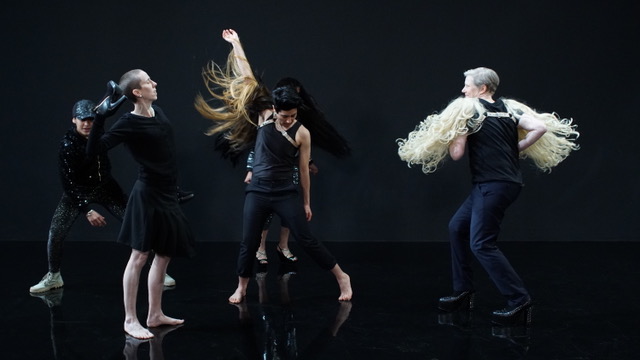 As they do here, Boudry and Lorenz have made an ongoing practice of working collaboratively with performers (most, like their epistolary interlocutors, queer and feminist). Moving Backwards draws together dancers fluent in a range of choreographic styles—from postmodernism to krumping—to experiment with the possibilities, potentials, and confoundments of backward movement. If these dancers fall within a familiar range of professional norms in terms of size, ability, and what I’ve come to call premenopausal physicality, this is a pointed accumulation of dance styles and queer identities—and though it may be impolitic to hazard the observation, it nonetheless seems important precisely in terms of politics to note that all the visible bodies have some tethered relation to the female.

This is a sodality of difference-in-relation, an assemblage of Amazons. Where classical Western dance is structured by symmetries, along with corps, elevation, and the phallic toe shoe, here asymmetries rule—or the queer symmetry of, say, Boudry and Lorenz’s specially designed double-fronted shoes, which appear both onscreen and as objects in the installation. The dancers deploy their individual kinetic and theatrical skill sets and virtuosities autonomously or in coordinated groups in a darkened stage space, accompanied by that club beat. Filmed dead on, they are projected near life-sized, relatively expressionless yet fully confrontational, establishing an awkward dialogue with the viewer. 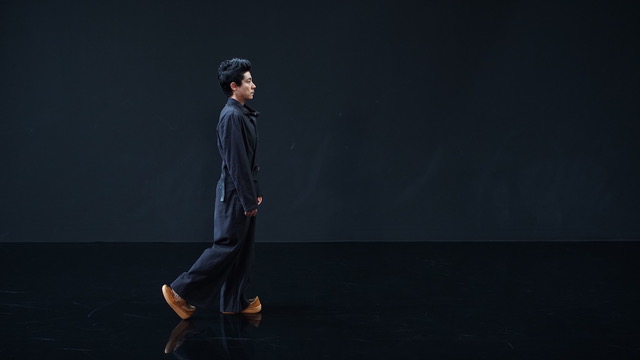 The presentation of queer and gender-nonconforming people in their physical power and discrete virtuosity, eschewing traditional dance’s couple-form and occasionally directly returning the indifferent gaze of the camera (and by implication me and you), is a challenge—but it’s compelling, too, as a “join us” kind of strategy, amplified by the music and the often-demotic kinetic vocabulary. The camera tracks back and forth, reiterating the horizontality of the dance floor like a dumb surveilling machine, its movement so slow, smooth, and autonomous that it largely slips below the level of attention, to be noticed only when we look at the dancers’ grounded feet. More subtly, three segments of the film are in fact run backward—meaning the dancers themselves, echoing the Kurdish fighters, are actually moving in the opposite direction than they appear to be. As the camera tracks, it both captures and misses what we, in fact, are watching.

In a letter from Tehran, curator Azar Mahmoudian echoes Boudry and Lorenz’s canny mash-up of Michael Jackson’s iconic 1983 televised performance of the backslide and Walter Benjamin’s Angel of History—his face turned back toward the past, his wings pushed forward by the future. “During the massive suppression of leftist political dissidents in the early 1980s in Iran,” she writes, “ ‘Moon Walking’ became a thing. It was stunning and fulfilling to watch. Pretending you are walking ahead, but actually moving backward, as if the ground under your feet were slipping back, or a storm were irresistibly propelling you . . .” More recently the step has been queered in artist Klara Lidén’s video work, The Myth of Progress (Moonwalk) (2008), in which the butch, white, female (and European) artist moonwalks through a grim city nightscape, inviting personal catastrophe while bearing witness to urban desolation.

But here the mood is very different. Boudry and Lorenz insist (as they have in multiple projects) on a club structure signified by the raised platform of a dance floor. As installed at JOAN, that platform stands directly facing the projection, whose width determines its dimensions, creating a quasi one-to-one relation between platform and projection—and by extension between occupants of the platform and the bodies in the projected image. Pounding and insistent sound evokes the nightclub. Some people use the platform as seating; a few stand on it, or walk or hesitantly dance across it. For Boudry and Lorenz, clubbing represents a provisional utopic social space, “a means of coming together, re-organizing our desires, and finding ways of exercising freedoms.” 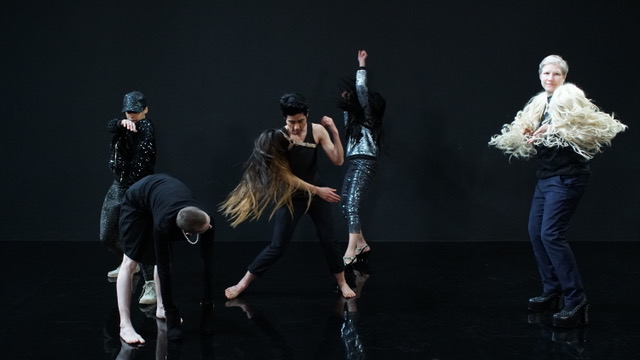 Seen the first time, with at least a dozen fellow visitors—the punch of the music’s bass lines and beats vibrating the fleshly multiplicity of more-than-one-body—the projected plus viewing company made for an odd shuttling between senses of voyeurism and participation, of surveillance and tactical giving way. Later, visiting the gallery alone, I felt impatient and uncoordinated, despite the promised liberation of dancing on the platform by myself. I had wondered what the sound would feel like lying on the platform. And the answer was: nothing. But when you’re standing, with your weight distributed across the soles of your feet, the sound vibrates up through those two planar surfaces in a powerful, bodily invitation to join that small cell of guérillères.

Judith Rodenbeck is a Los Angeles–based critic and (very) occasional performer. She teaches in the Department of Media and Cultural Studies at the University of California in Riverside.