Philip Scheffner stretches a cellphone video into a hydropoetic meditation on migrants. 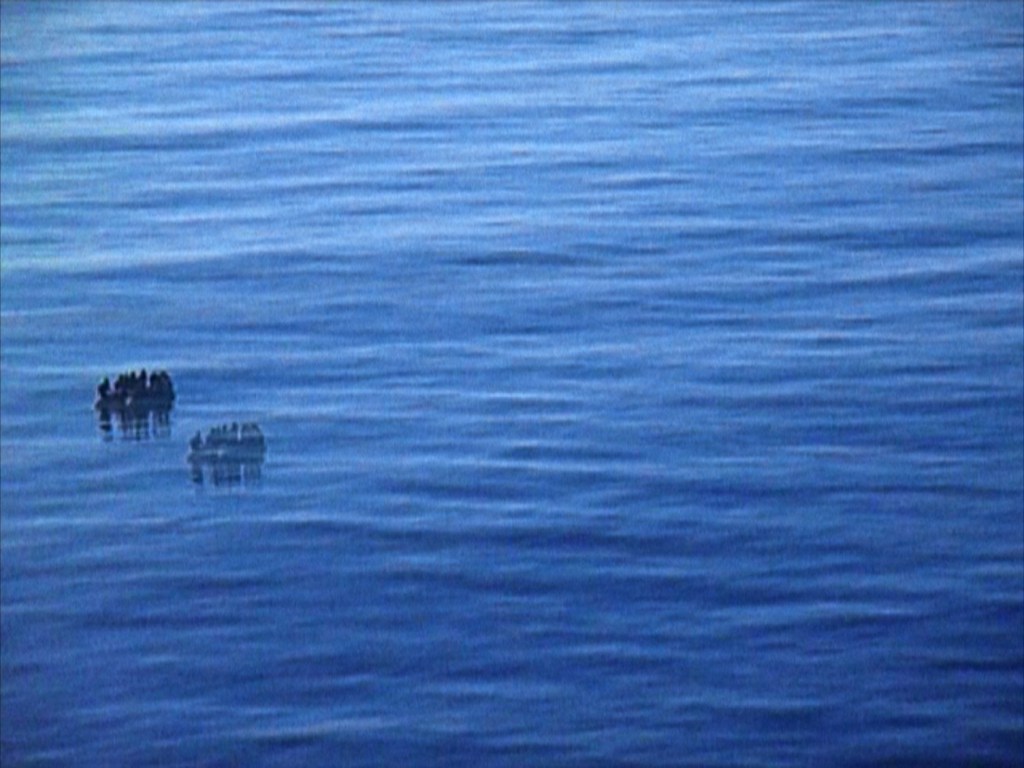 Still from Havarie, by Philip Scheffner.

Havarie means damage in German. Sea damage. Havarie is a film too—a filmic expanse—about the sea, about those who sail or drift across it, those who disappear into it, or are forever damaged by it. It is constructed out of a piece of cellphone footage lasting three minutes and thirty-six seconds that Irish tourist Terry Diamond shot from the deck of a cruise ship named Adventure of the Seas. It captured a number of dark-skinned men aboard a small rubber dinghy in the Mediterranean. This clip, mysterious and fractured, found its way to YouTube, where it was later discovered by German filmmaker Philip Scheffner. He slowed down the video, stretched it so that three minutes became ninety, layered in many voices from those of a Ukrainian ship captain to an Algerian woman about to be deported, and transformed what could have been an eyewitness news item into something very different.

It’s a transformation that film writer Olaf Möller regards as mystification, arthouse commodification, a kind of trafficking. After viewing Havarie when it debuted at the 2016 Berlinale, he denounced it as “morally abject,” of appeal only to the “discourse-happy hipster crowd,” and claimed it was “all about intentions and attitudes instead of engagement, be it emotional or political.” Many things are certainly absent from the film: the faces of those seafarers, their first-hand testimonies, extended narratives about the lives they had left behind, denunciations of Fortress Europe. Anyone who views contemporary migration through the lens of activism, social justice, or human rights is likely to be puzzled. This is a film that, in a phrase used by Hans Blumenberg in his 1996 book Shipwreck with Spectator, sails “the high seas of optical subjectivity.”

Scheffner’s treated footage is often blurry and indistinct. The individuals dissolve into blobs of gray and brown, barely solid clumps of pixilation that resemble amateur photographs of the Loch Ness monster. They become apparitional, mirages as tantalizing and as potentially non-existent as the happy-ever-afters to which the seafarers are heading. Our inability to hear the voices of those on the dinghy, to zoom in to see their faces, even to determine their gender: these barriers both frustrate us and push us to pay closer attention. We are certainly made to work harder than during those news-channel reports of the “refugee crisis” in which TV journalists offer raw personal accounts of life-and-death journeys from North Africa to Europe.

At times, during these ambiguous stretches of the film, it’s possible to hear echoes of The Third Man (1949), in which penicillin racketeer Harry Lime (played by Orson Welles) justifies his crimes to an old pal by pointing to the men and women on the ground below the Ferris wheel carriage in which they stand: “Would you really feel any pity if one of those dots stopped moving forever?” The elusiveness of those “dots” can also be seen as a function of format; they are what artist and theorist Hito Steyerl, writing about visual knowledge in the digital era, calls “poor images,” that is “the contemporary Wretched of the Screen, the debris of audiovisual production, the trash that washes up on the digital economies’ shores. They testify to the violent dislocation, transferals, and displacements of images.”

In Havarie, those dislocations produce haunting effects. At times there appear to be two dinghies on screen: is the second a reflection? A weird doubling? We hear speculations about the men from sea workers: “They say some spirits are roaming around in the wilderness. I heard these people from Libya going to Italy. They died of hypothermia. But I don’t know. Maybe their spirit is still roaming around.”

Havarie is slow cinema, a film about time, a film that will excruciate and torment viewers used to the rhythms of traditional storytelling. They, perhaps like the dinghy-dwellers, may wonder: how much longer will this—can this—go on? Maritime space, as seen in hydropoetic work by Shaina Anand and Ashok Sukumaran (From Gulf to Gulf to Gulf, 2013) and Allan Sekula and Noël Burch (The Forgotten Space, 2010), lends itself to deceleration. Sekula even argued it runs counter to the lie of neoliberalism: “The sea is all about slow time—things move slowly, there’s a lot of waiting—and as such it contradicts all the mythologies of instantaneity perpetuated by electronic media.”

Remarkable, almost psychedelic shafts of color appear toward the close of Havarie, but for the most part this is a blue film, a film that invites us to speculate on the cultural meanings that blue has (melancholy, visionary thinking, pornography). It also invites comparison with Derek Jarman’s Blue (1993), which begins with the narrator sitting in a café drinking coffee served by young refugees from Bosnia: “The war rages across the newspapers and through the ruined streets of Sarajevo.” Blue is autobiographical. It meditates on Jarman’s own declining eyesight, on AIDS (“I have no friends now who are not dead or dying. Like a blue frost it caught them. At work, at the cinema, on marches and beaches”), on the possibility of imaginative resistance.

Like Blue, Havarie performs a kind of minimalism. But, like Blue, its visual austerity is offset by the richness of its sound, turning the sea into radiophonic terrain as it tunes in to a woman in France phoning her husband in Algeria, container-ship employees discussing stowaways, an Irish guy recalling a friend’s death at the hands of the British army, a Filipino pop song, a migrant chanting: “It is only us and our God, the sky and the water. That’s our gear. The sea lies ahead of you. Spain lies ahead of you. Misery lies behind you. Open your doors, Spain!”

It’s this rich broadband that Scheffner evokes so potently. Havarie bores, mystifies, invites us to lean in, makes us self-conscious about looking at—and consuming—images of migrants. That strikes me as engagement. That strikes me as political too. If it generates the discourse that Moller abhors, so much the better.