A vivid ride through the connection-making mind of poet Anne Carson. 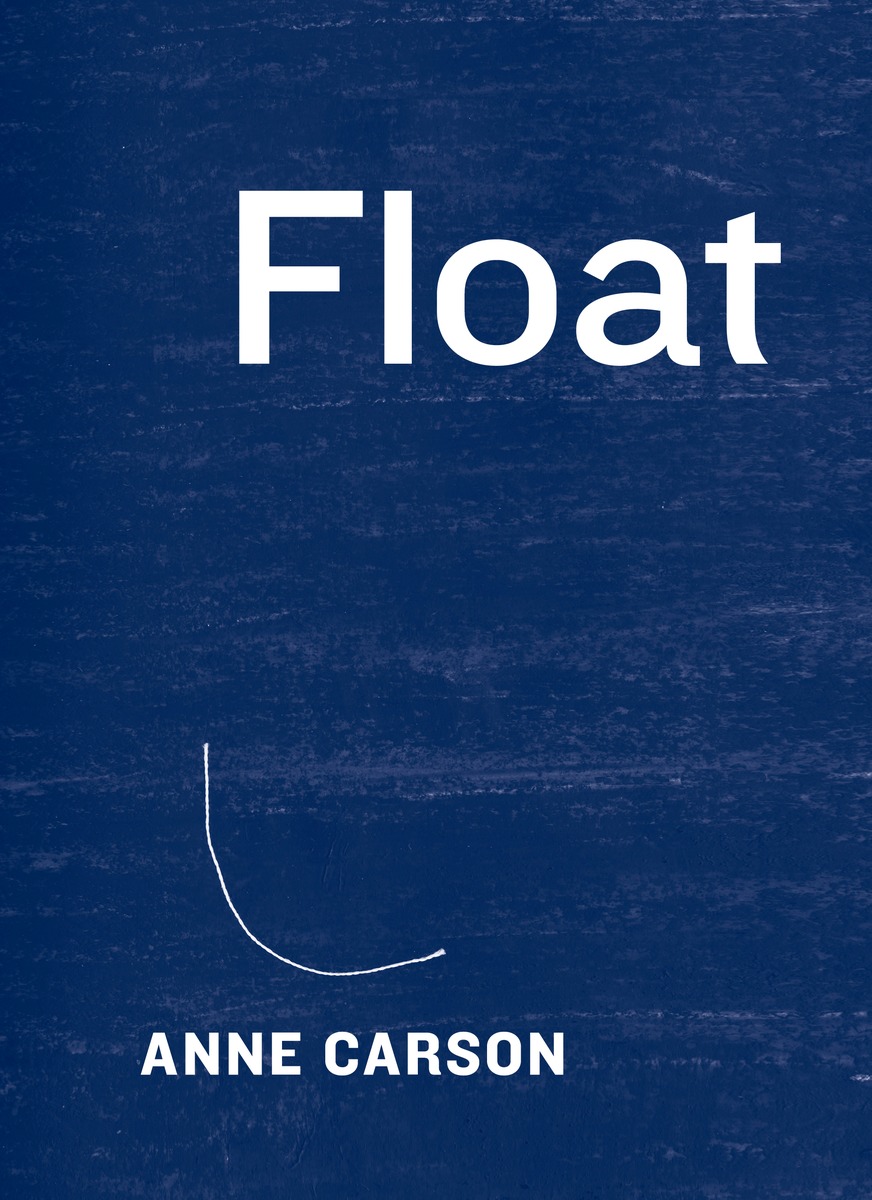 When the twenty-two chapbooks that make up Float tumbled out of their slipcase and fell in blue disarray on my bed, I picked up to read first the one called “How to Like ‘If I Told Him: A Completed Portrait of Picasso’ by Gertrude Stein.” It was a random choice, but it feels destined now—like picking a tarot card. It would steer me through the initially bewildering medley of play scripts, prose poems, sonnet sequences, translations, essays, and other, uncategorizable pieces of writing in Float. The title sheet to the collection said that the order of the volumes was “unfixed,” their topics “various.” Then, in a voice unmistakably Anne Carson, “Reading can be freefall.” This was instruction at its most remote, coolly in control yet poetic: “freefall” is on the brink of mythic action. These booklets are “to be read on ‘shuffle,’” she says to The Guardian, giving us freedom as well as the pleasure—or peril—of an encounter with Chance.

Another chapbook in Float told me how Carson, born in Toronto in 1950, “only accidentally learned Greek, from a bored high-school Latin teacher” who decided to teach her to read Sappho on her lunch hour. For Carson herself, being a classicist has become inseparable from being a poet and a translator. But somewhere deep inside there is also a slightly bored but exacting teacher, telling her student-readers not only how to read Gertrude Stein but also how to like her. Most of the chapbooks are like lecture notes in which teaching becomes a wayward performance, the lectern a stage prop. Carson is fascinated with collaboration as idea and practice, and many of these pieces have been realized by dancers, actors, and singers, who have turned her writing into voices, movement, action, and theater. Carson’s subjects, collaborators, addressees, dedicatees, mediators, and commissioners in Float are never academics but artists and performers, dead and alive, like Gordon Matta-Clark, Roni Horn, Lou Reed, Laurie Anderson, Wally Shawn, Merce Cunningham, Jonah Bokaer, Elizabeth Streb, Kjartan Sveinsson, and her husband, Robert Currie.

Although I have never met Carson, her influence on my own life is more that of a favorite teacher than of a beloved writer. I often read her work out loud to myself or others. While doing so, I find myself unabashedly “becoming” Carson, copying her gestures and mannerisms, her intonations and pronunciation. This brings to my mind what she describes, in her Paris Review interview, as the effect she has on people of putting “everything on an edge where they’re both charmed by the person or the writing, and also flatly terrified by a revelation or acceptance of revelation that’s almost happening, never quite totally happening.” Watch her deliver The Albertine Workout, a prose poem on Proust, on YouTube (as I often do when I am unable to sleep), and then try to elocute the text; you will then know what I mean by “becoming” Carson. But I would still feel nervous if I were placed next to her at dinner—though in a different way from being seated next to somebody like J.M. Coetzee, who doggedly refuses to charm.

Like many authors who are critics and teachers as well, Carson provides the best clues to her own work when discussing somebody else. “Often when reading Gertrude Stein,” she writes in the chapbook on Stein, “I have the sense I’m getting the gist and I ride along a while in good faith, then all at once she switches tracks and there I’m left standing, as it were, at the station. She drifts out of sight:

Then she zooms back, intent on her ending and proud of her central contrivance, this page that mirrors Picasso and Napoleon, this miraculous triangle they form together with herself. . . . No gentleman is an island, her mirror implies, at least if Gertrude Stein happens to be sailing by.”

This meeting of Picasso, Napoleon, and Stein is not only vivid and funny, but also self-reflexive. In Carson’s own essays, poems, and works of fiction, a series of triangular contrivances, delicate yet rigorous, takes the reader through varieties of connection making. Catullus and her dead brother, Laurie Anderson and Lou Reed, Cassandra and Gordon Matta-Clark, Odysseus and Brigitte Bardot, Stesichoros and his mythical Geryon, Proust and the lying Albertine, or her own father and his unhinged Uncle Harry are the paired angles to which Carson becomes the third. Consequently, another person’s text becomes the diving-board from which to plunge through “a rip in spacetime” where words brush against words, or the cliff edge from which to “step off” and fall before we are taught to float. “I like to write lectures,” declares Lecturer II from her “lectern stage right” in “Uncle Falling” (included in Float and first performed in a church in New York in 2010). “My favorite part is connecting the ideas. The best connections are the ones that draw attention to their own frailty so that at first you think: what a poor lecture this is—the ideas go all over the place and then later you think: but still, what a terrifically perilous activity it is, this activity of linking together all the threads of human sin that go into making what we call sense, what we call reasoning, an argument, a conversation. How light, how loose, how unprepared and unpreparable is the web of connections between any thought and any thought.”

The difference between falling and floating begins to disappear. This is where the dance of writing and of thought occur, and where the dancer is both dangerously out of, and superbly in, control. “What’s important isn’t falling, it’s how you take the hit,” Streb, the choreographer, tells Carson in “Uncle Falling.” “That’s the zone of interesting human complication.” But Carson pushes this zone beyond the “freefall” of reading and of performance to where the first and last things meet: “To fall after all is our earliest motion. A human is born by falling, as Homer says, from between the knees of its mother. To the ground. We fall again at the end: what starts on the ground will end up soaking into the ground forever.” At once classical and tragic, shot through with loss, this is a place to which the ancient Greeks have led her—“in the grit and dregs at the bottom of the psyche where pain has its kitchen there are only extremes, there is no mildness, there is no mercy.” The chapbooks of Float come to us from this place of “glasshard chill,” where Carson’s cool appears to be perfectly at home.

Aveek Sen studied and taught English literature at Calcutta and Oxford. He won the 2009 Infinity Award for writing on photography, given by the International Center of Photography, New York, and has written with artists like Dayanita Singh, Roni Horn, Moyra Davey, and Dominique Gonzalez-Foerster. He enjoys writing across literature, the visual arts, cinema, music, and everyday life. He is associate editor of The Telegraph, Calcutta, for which he writes a column called “Art & Life.”