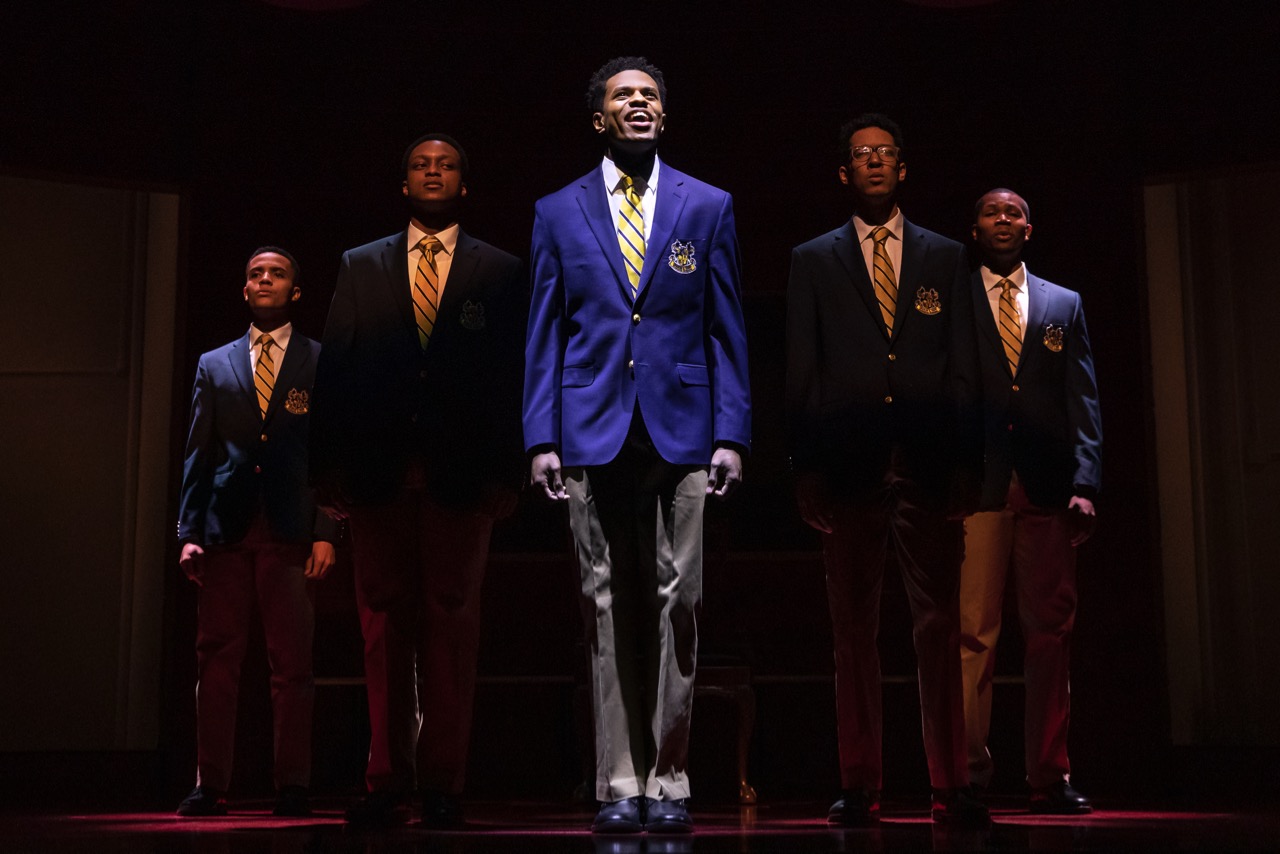 When we first meet Pharus (Jeremy Pope), the teenager at the center of Tarell Alvin McCraney’s Choir Boy, he’s singing. His tenor is wine-rich and clear, and he’s soloing on the hymnlike anthem of the all-black Charles R. Drew Prep School for Boys. “He abides with us still,” he sings about our Lord and Savior, as somewhere offstage seniors parade in to graduate, “And with all who will trust and obey.”

Jesus is one thing, but the unapologetically swishy-dish Pharus really shouldn’t trust his school: his classmates hiss slurs at him, his scholarship might disappear, and his headmaster (Chuck Cooper) wants him to “tighten up” everything from his limp wrist to his outrageous frankness. And obey? Hardly. Pharus is destined to be out in front. At the beginning of the play (the production is set in 2018), he’s heading into his own senior year, anticipating being named choir lead and finally wreaking vengeance on the snarling junior who calls him, right here in his moment of glory, “faggot.” Glory should taste sweet. 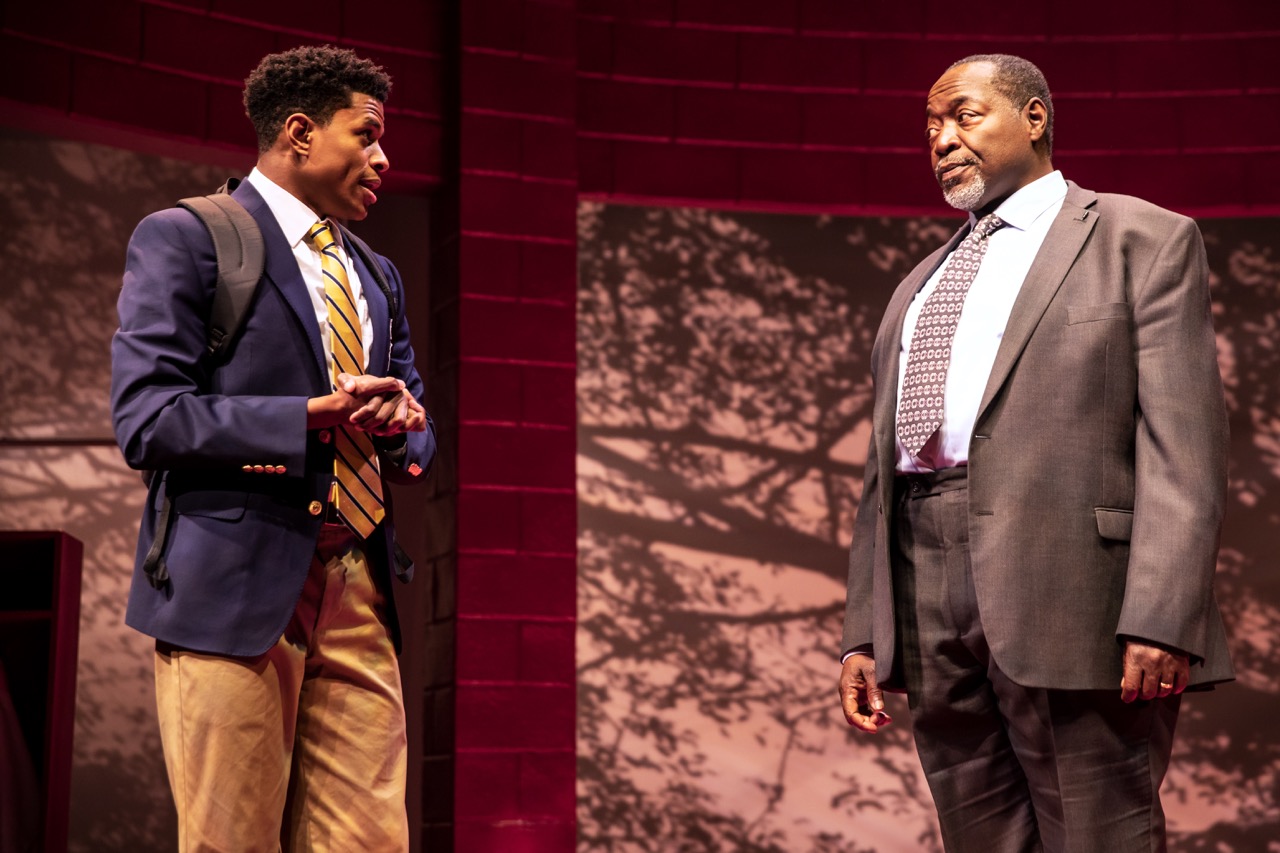 McCraney’s first show on Broadway comes after Moonlight (based on one of his unproduced drama school projects) won the Oscar for best picture, and when Choir Boy works, there is actually something enticingly dreamy and un-play-like about it. It’s almost a musical, since the action frequently stops for the Drew men to sing Jason Michael Webb’s incredible a cappella arrangements of songs like “Keep Your Eyes on the Prize,” while dancing burn-down-the-house step choreography by Camille A. Brown. The sheer sound of these numbers—propulsive, percussive, theater-shaking tattoos—substitutes for other structures, so that the night moves forward despite a text that sometimes seems thin and under-orchestrated. 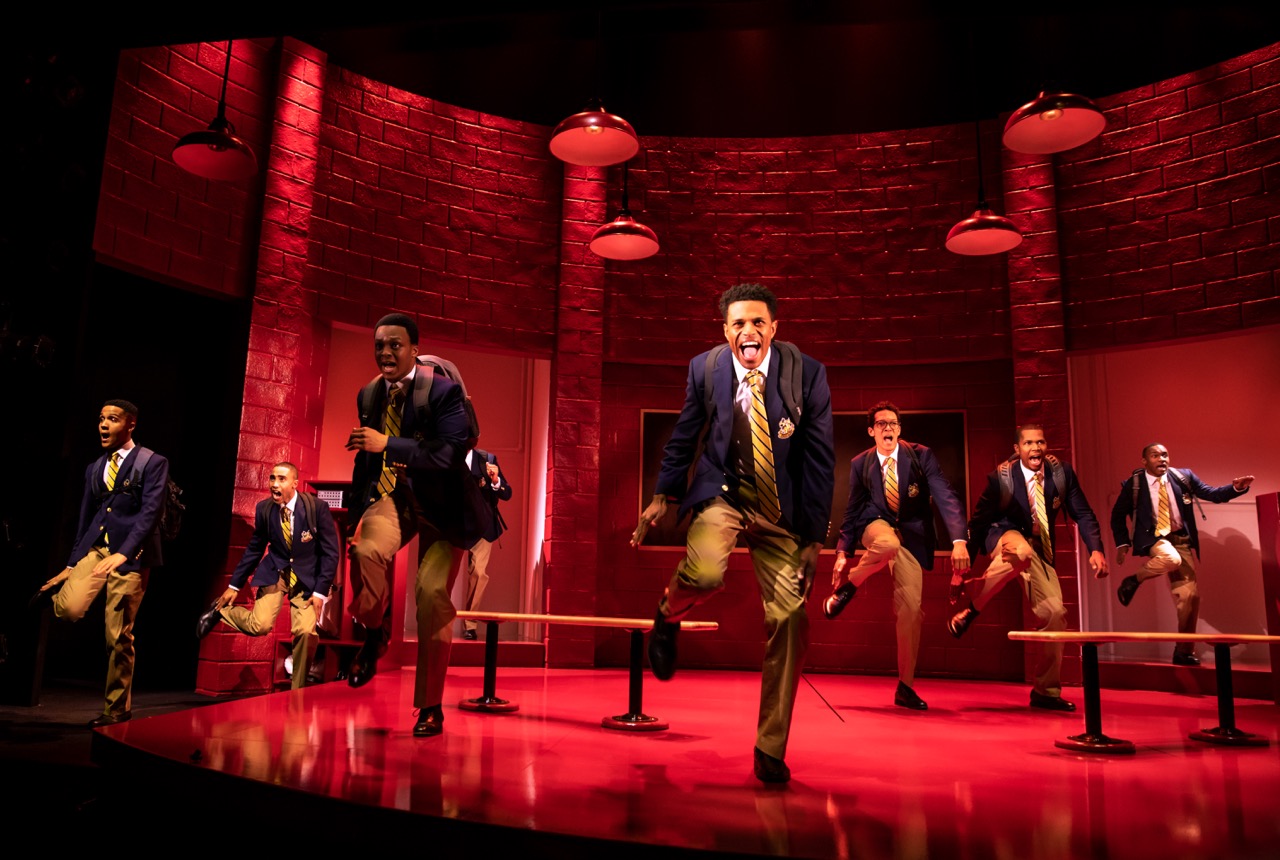 The text itself is more a hanger than a suit of clothes. In various scenes, Pharus (the only three-dimensional character) faces off with paper cutouts: the headmaster himself, his nemesis Bobby (J. Quinton Johnson), and his supportive, straight-as-a-needle roommate AJ (John Clay III). Pharus barely even interacts with the one boy who has a claim on his heart, David (Caleb Eberhardt). When Barry Jenkins adapted Moonlight, we saw how vivid McCraney’s scenarios can be—how they can wring the soul by dispensing with surrounding details and plunging immediately into life’s most intense moments of betrayal or devastation or tenderness. On stage, in a play that contains the connective tissue that was so wisely elided in Moonlight, McCraney and his director Trip Cullman struggle. 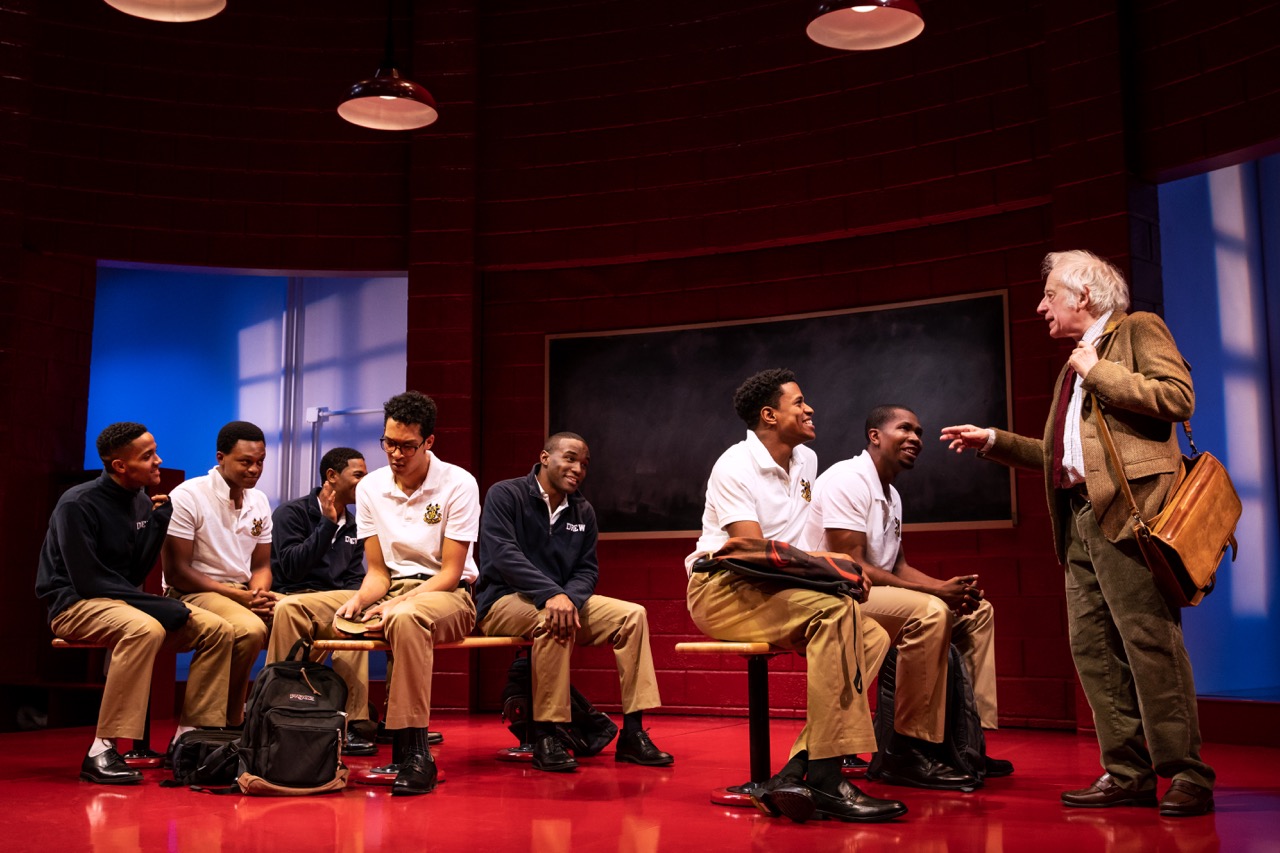 For instance, I don’t even know how to describe the class that some of the students are forced into by their well-meaning headmaster. Some vague expositional gibberish introduces the white professor Mr. Pendleton (Austin Pendleton), who comes in to teach an ill-defined seminar to a group of students seemingly selected for their likelihood to a get a rise out of one another. “Give . . . a well-known theory,” he bumbles, “and challenge it.” This “class” provides Pharus with an opportunity to talk windily about slave spirituals, and whether or not they were literally used to guide escaping slaves. His position: the evidence is missing, so we must celebrate them as containing religious guidance rather than actual instructions. “We may not agree on much,” he says, “but we can all remember a time when our mothers rocked us and herself to those spirituals to soothe our souls. I’ve been there when the lost found hope and a path ’cause of this music, and it’s those melodies, the pitch harmonies and rhythms—those are the maps and guides to the Promise Land.”

Teenagers do not make presentations like that; the Mr. Pendletons of the world do not “mm hmmm” in appreciation if they do. Possibly this is a warning that we shouldn’t interpret McCraney’s setting literally—that this play is about how high school felt, rather than some representation of reality. 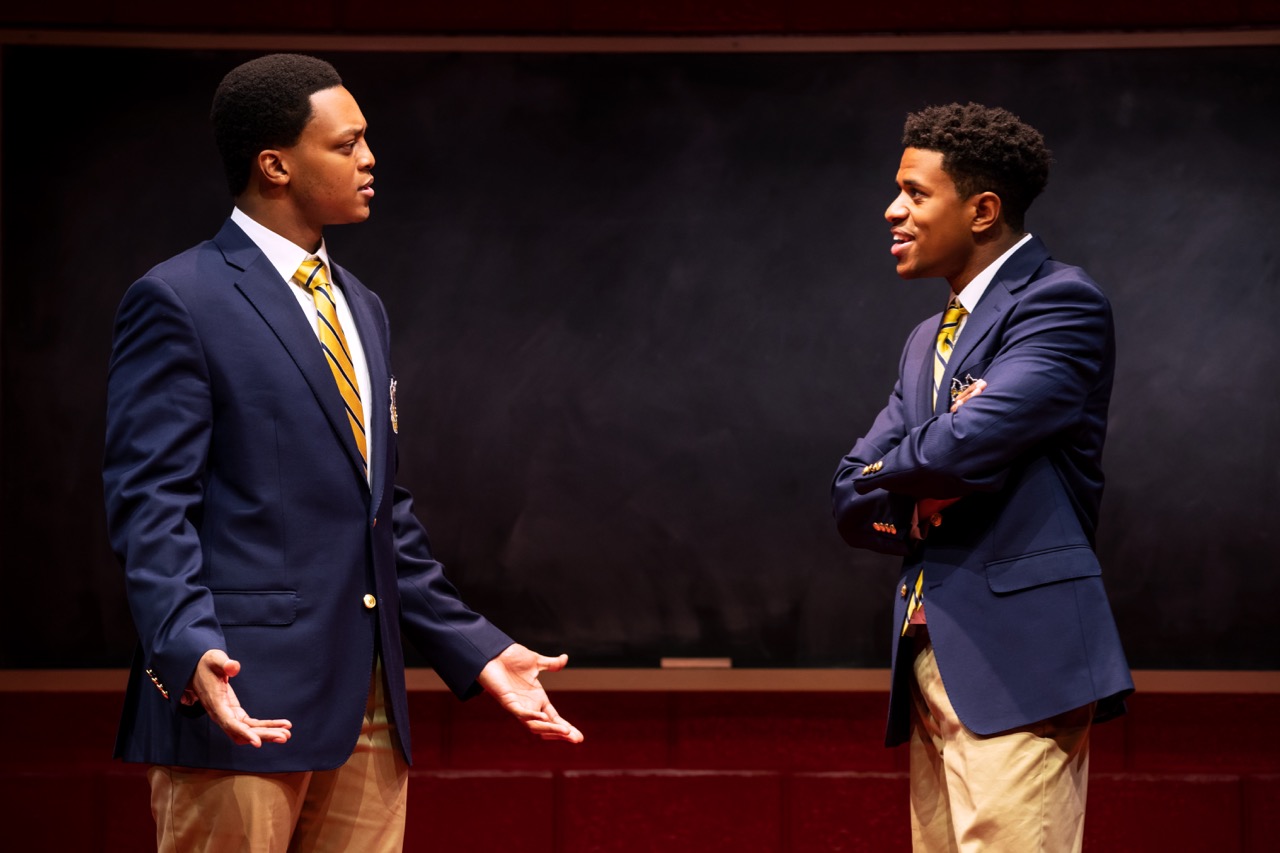 Because Choir Boy is basically a gothic romance, full of hectic passions, rank humiliations, sudden victories, and cruel injustices, some of which—taken at a remove—don’t really seem like injustices after all. Pharus is in despair because he’s not being allowed to break tradition to sing at his own graduation. But the show opened with him singing at a graduation! He just wants to do it again. McCraney’s plot pivots around Pharus’s pining, aching, desperate mood whether any particular scene’s goal makes sense or not. The heart wants what it wants; Pharus’s ambition craves what it craves. But because Pharus’s ersatz anguish comes mixed together with actual suffering—an uncaring mother, constant taunting by a vicious underclassman, the school’s mentioned-at-the-eleventh-hour ban on romance among students—we respond to it all, scrambled together.

The play first opened at the Royal Court theater in 2012, yet still, parts of Choir Boy seem as though they need another draft. Unevenly explored topics include: high school (they are all highly driven seniors who mysteriously never mention college), modernity (they are teens in 2018 who sing only gospel or New Edition), and life-as-it’s-lived (they do all shower a lot, but they never eat, discuss politics, or do homework). This unreality makes the characters seem like sitcom figures, trapped in a senior year that can never end. Strip away the language, you’ve got Saved by the Bell. 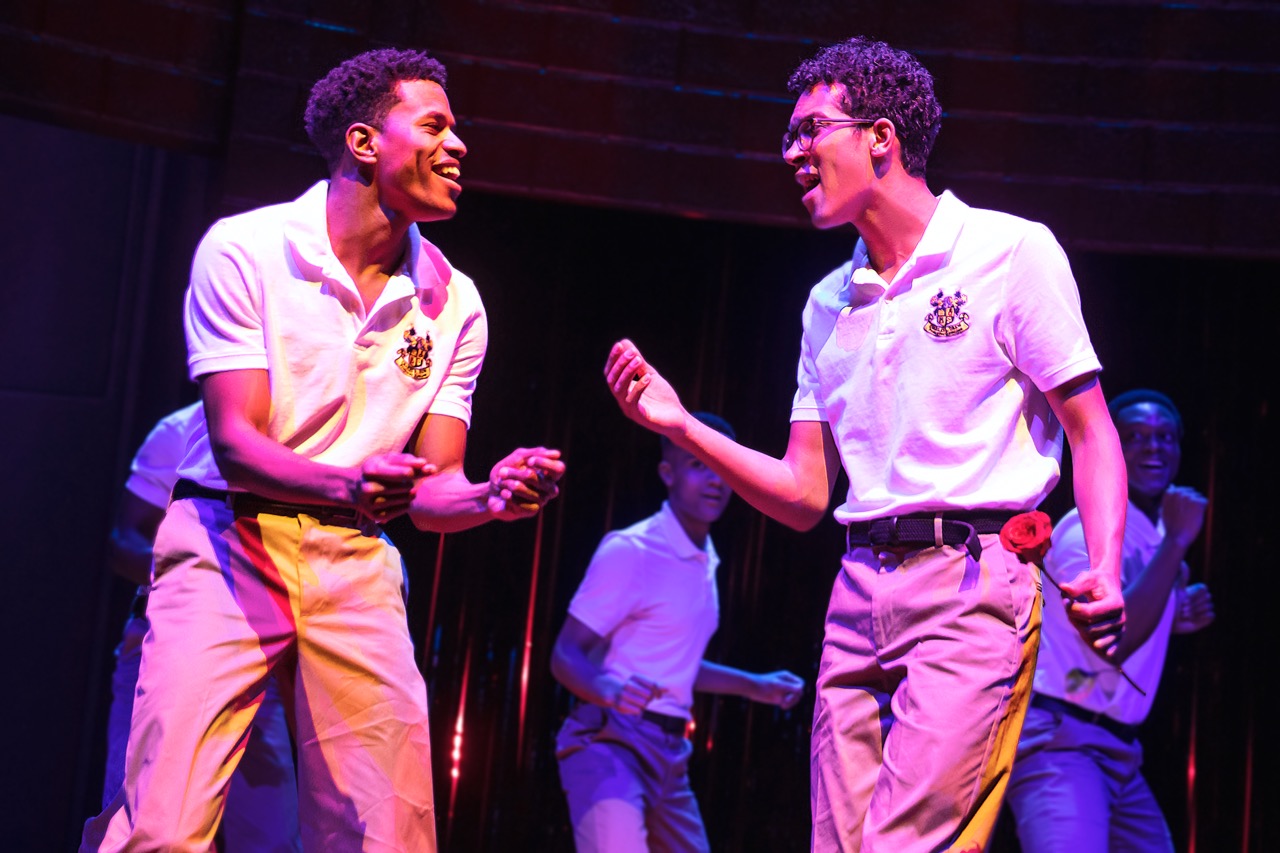 So the language does a huge lift here. McCraney has an incredible ear for vivid, sleek, funny talk, a killer weapon that Pope in particular cracks like a whip. “If you can bless the Lord, call him up,” he tells poor, closeted, minister-wannabe David. Pharus isn’t our lead character because he suffers the most (David twists on a cross his father made), nor because he particularly changes or learns. Instead, he calls down the great spotlight of McCraney’s attention because Pharus can sing and talk better than anyone you ever met.

Pope moves as quickly and bonelessly as flame—and he seems to have been born for McCraney’s dialogue, which exists as a supercharged blend of Biblespeak and queer realness. When AJ asks Pharus what his “type” is (Pharus is always set at “maximum gay,” but no one’s ever actually seen him kiss a boy), Pharus fires back: “Jesus.”

AJ: Temple table–turning Jesus or Jesus on the cross?

PHARUS: I mean “the old rugged cross” is my go-to, but den of thieves Jesus is lit. 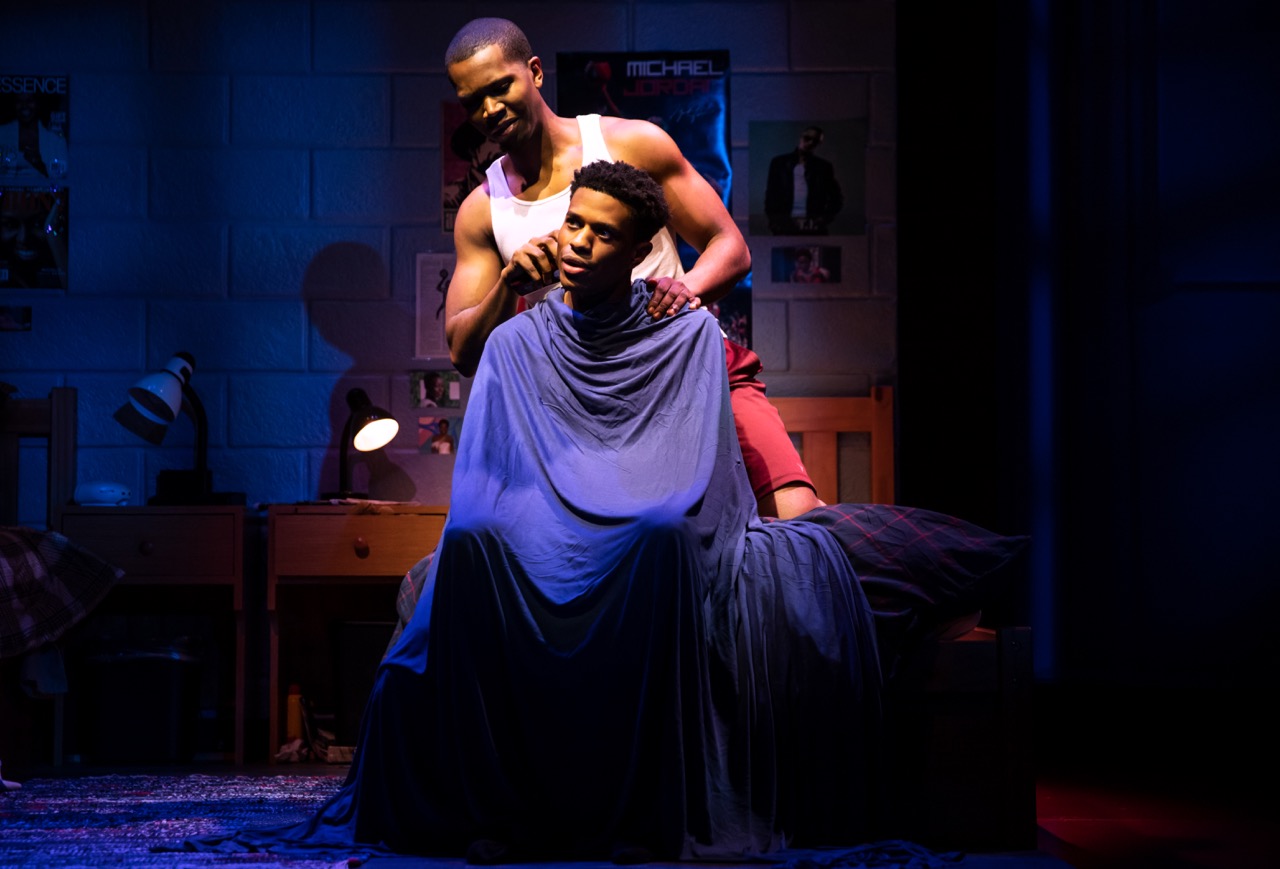 That is, among other things, the sound of the Good Book bedazzling itself, the minister throwing his hands up in praise, the Old Enemy tipping his hat and ceding the field. The ensemble’s talents are unassailable; their singing and dancing are worth the price of admission. But it’s the language that rings the loudest. McCraney and all the queer, fabulous black boys he’s speaking for (on Broadway! The Great Usually White Way!) are standing in the pulpit now and raising their voices. Not every service has a perfect sermon, and as a play, Choir Boy is pretty patchy. But sometimes you go sit in your pew anyway—maybe because it’s a gathering of the faithful, or because the service is worth it for the song.

Helen Shaw writes about theater and performance in publications such as Time Out New York, Art in America, Artforum, and American Theatre. She received the 2017–18 George Jean Nathan Award for Dramatic Criticism.