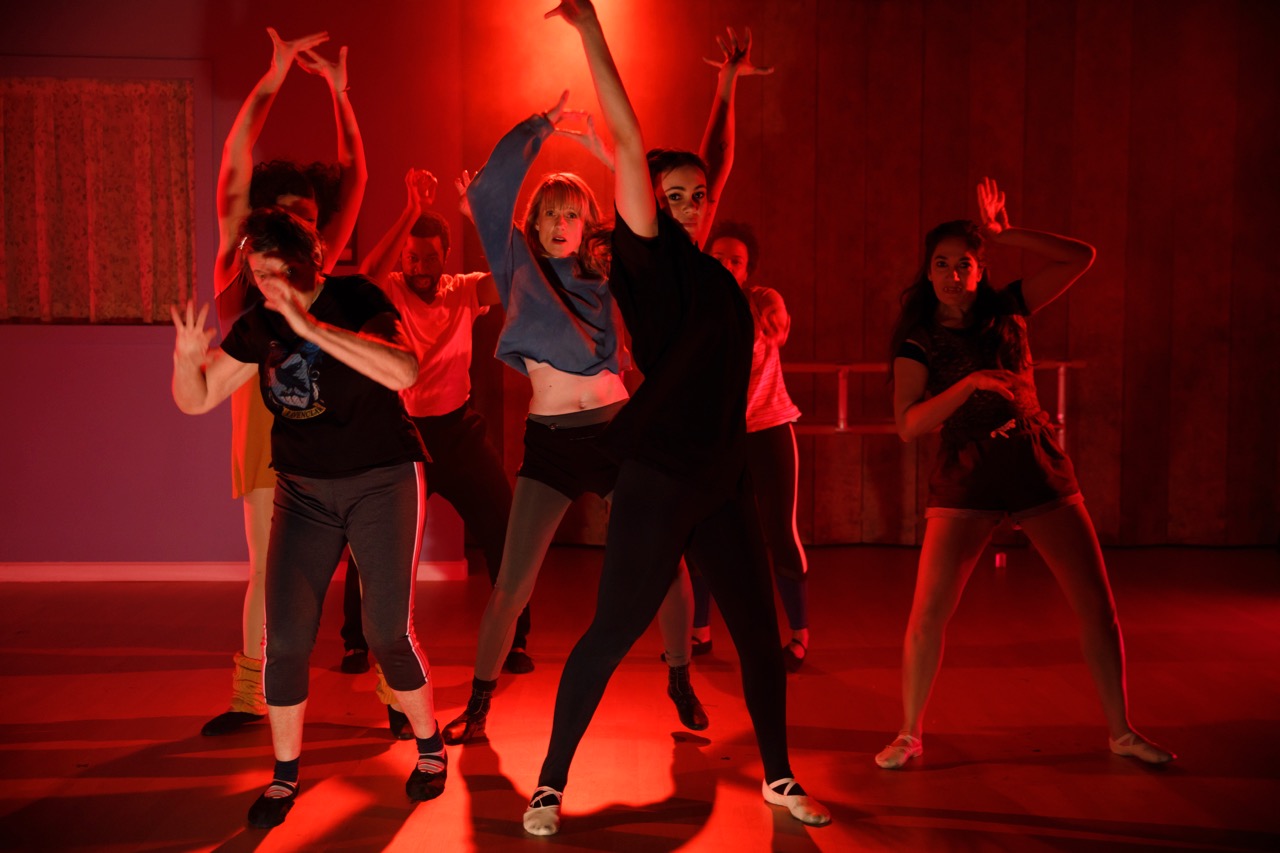 Time was, if you wanted to see a complicated dance number about Gandhi, which segued into a dream-ballet with vampires, which then turned into a violent monologue about an adolescent claiming her sexual and intellectual power—you’d need to go downtown. The weird stuff usually happens in weird places: theater basements, summer festivals for avant-garde work, farthest Brooklyn. Even Manhattan’s most adventurous Off-Broadway nonprofits generally steer toward elasticized Realism, in which perfectly normal-seeming people played by technically precise actors gesture to the Absurd. The performative weirdness, where deliberately awkward stage creatures barge into tastelessness, has stayed on the margins. (Rule of thumb: women don’t smear themselves with their own fluids uptown.) 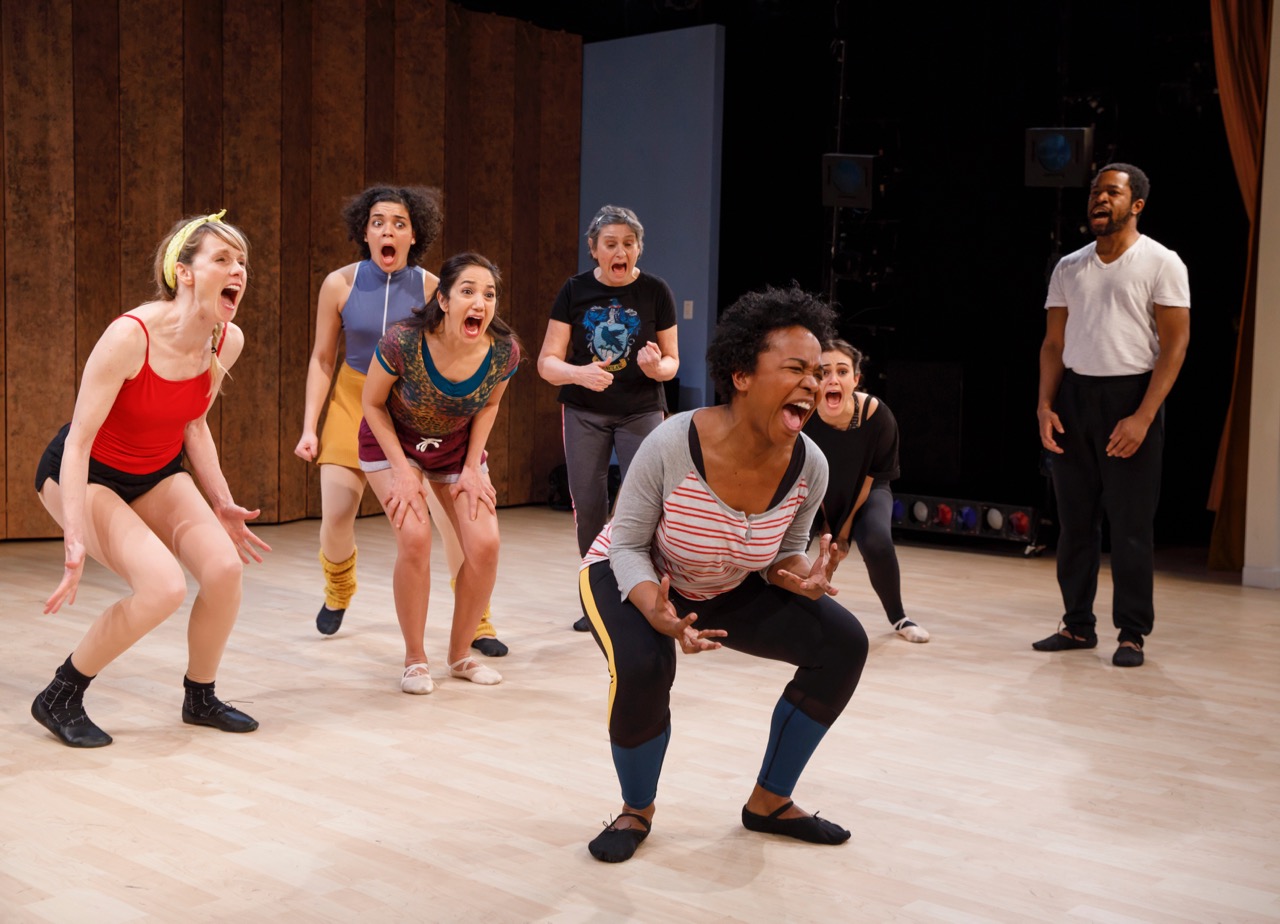 Dance Nation isn’t exactly on Broadway. But Clare Barron’s ribald dance-class comedy—which won the 2017 Susan Smith Blackburn prize for women dramatists—has just opened at Playwrights Horizons, bastion of glossy, textually heightened productions. The play’s sweet: it’s about adolescent girls wearing legwarmers and being super-serious, which is automatically hilarious. But it’s also genuinely subversive. Taboos are broken (you’ll get used to full nudity right quick), and the play’s position on the value of art manages to be provocatively equivocal, often making art seem like a drug that amplifies destructive thinking. More importantly, the play proposes something almost too bitter to bear about female magnetism. The girls vibrate between states—confidence and shame—in a kind of ungovernable alternating current. The idea that puberty’s self-hatred and self-consciousness create a kind of girl-specific superpower isn’t new; we’ve had poltergeist myths for a while now. But Barron tells us this dark strain will braid together with the brighter one of preteen swagger, and neither will ever really go away. These girls will grow into women with roots that reach deep into bad earth.

Crucially, Barron asks that adult actors play the youngsters, and she makes a point of asking for untrained non-dancers. This means director Lee Sunday Evans can cast the oddest, funniest personalities in town: timid Maeve is Ellen Maddow, an Off-Off Broadway fixture since the 1970s; quiet plugger Ashlee is Lucy Taylor, known for playing terrifying witch-mothers for the devised theater company Elevator Repair Service. The incongruity is a big part of the piece’s comedy, but it’s also Barron’s strategy to remind us how much our earlier selves stay with us. A casting note in the script says, “These 13-year-old characters are haunted by the specters of what they will become,” and certainly in several painful moments, you see a double-consciousness on the actors’ faces. They break our hearts two ways—with innocence and experience. 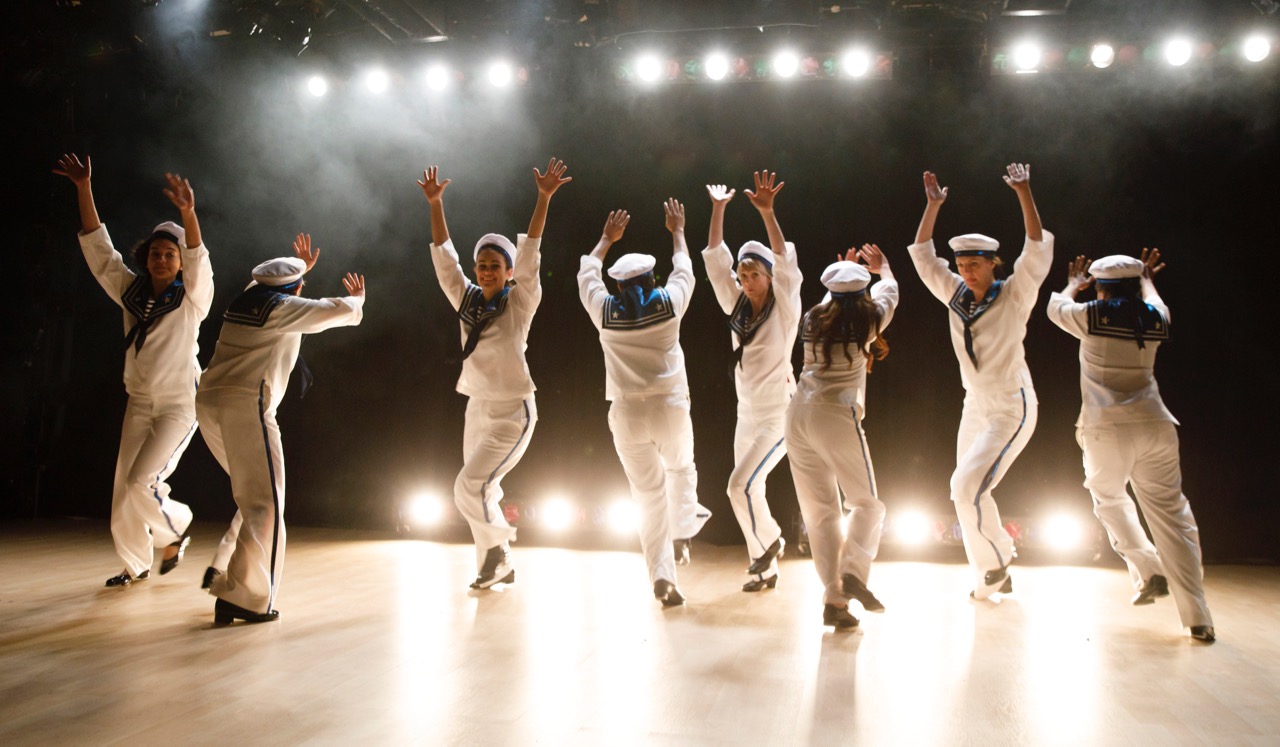 Dance Nation opens big, with a rousing tap number—dancers in sailor suits throwing paradiddles and time steps. The curtain closes; tappers clipper-clop into the wings, but one hoofer (Christina Rouner) is left behind onstage. Something awful has happened to her leg; blood pools. Darwin’s nature is red in tooth and claw, but preteen dance competitions are red everywhere. Among the ambitious eleven- to fourteen-year-old girl-citizens of Dance Nation, all have pledged allegiance—intense, dominating, totalizing allegiance—to the art of dance. If it means a shattered femur or a sledgehammered emotional state, then so be it. Their loved and feared dictator is Dance Teacher Pat (Thomas Jay Ryan in a very funny scarf), who issues edicts, determines roles (who will play the spirit of Gandhi?), and gives terrifying pep talks. “This is the future! I am making the future!! We’re gonna make those judges feel something in their cold, dead, pernicious hearts!!” The girls nod; they focus; this hectic overstatement is exactly how they feel about dance too. 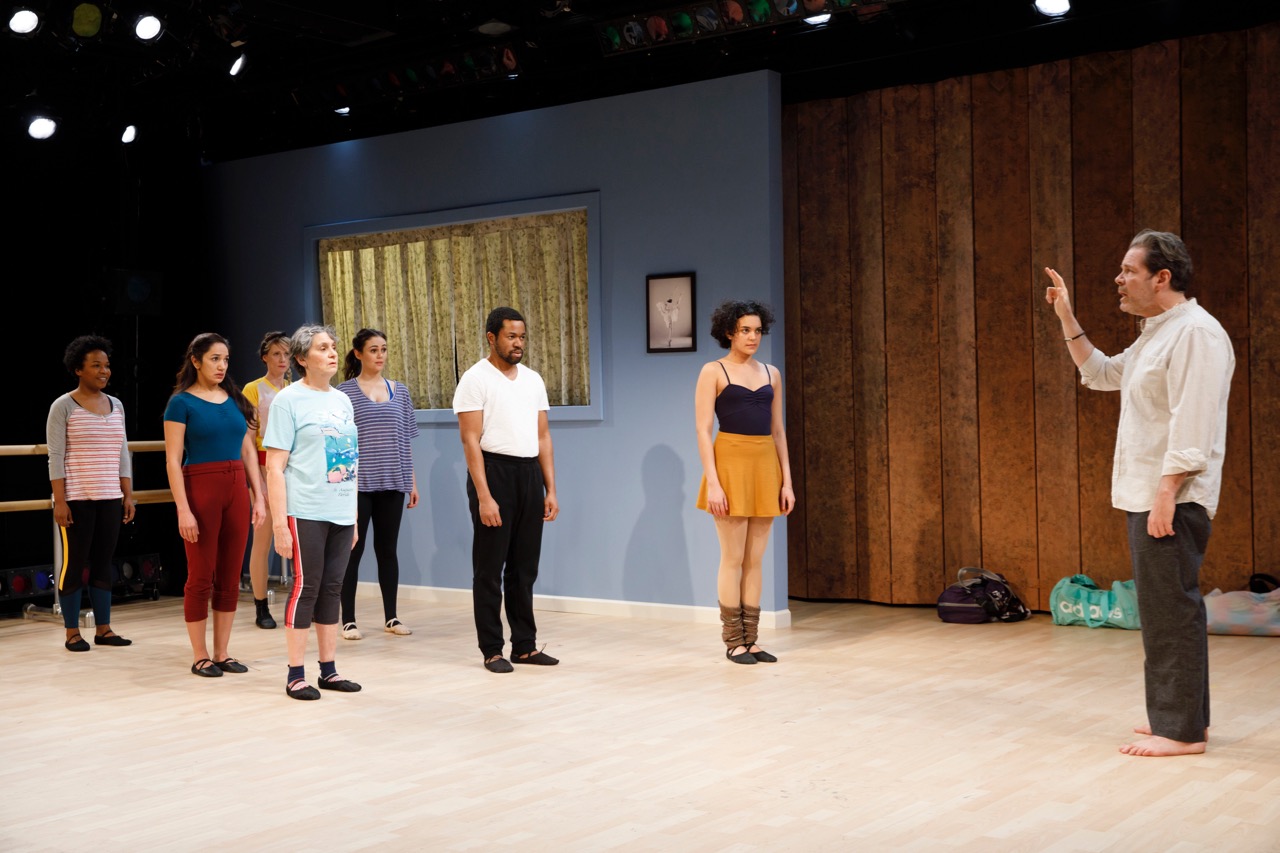 Dance Nation’s plot is just a waltz of egos: Zuzu (the superb Eboni Booth) is desperate to land a solo, but then all the girls in Pat’s dance team are desperate for one; Zuzu’s best friend Amina (Dina Shihabi) might actually have a career ahead of her, and her sweetness—she knows her talent throws other dancers into despair, but she can’t help it—will harden and turn brittle in adulthood. Most of the action takes place in a dance studio (Arnulfo Maldonado designed the set), where a gigantic glowing moon occasionally floats in the window. Some of the characters have a gift for prophecy, so Connie (Purva Bedi) talks about a time in the far future when she’ll finally open up to her best friend Ashlee about the anguish and suicidal thoughts they’ve both struggled with. 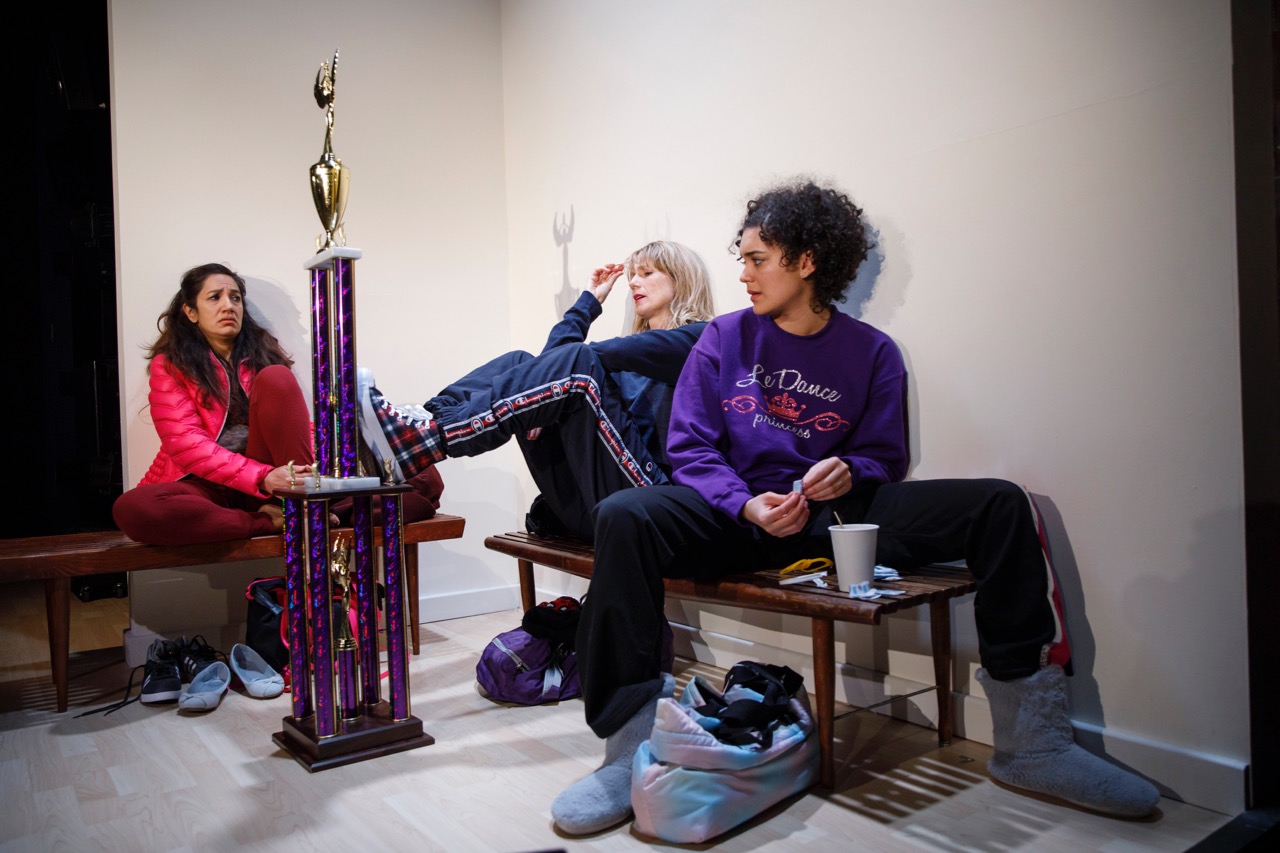 The play itself seems like an adolescent, full of hubris and vulgarity (I counted twenty-four uses of the word “pussy,” which includes an exultant pagan chant) and heightened emotion that threatens to burn the world down. The one boy in class, Luke (Ikechukwu Ufomadu), trembles with inchoate longing; everyone seems on the verge of going feral; Ashlee halts the play for an obscene aria about what would happen if she stopped denying her beauty, her intelligence, her libido. “Sometimes I wonder what would happen if I really went for it,” she cries. Certainly the show itself does: Sofia (a wonderful Camila Canó-Flaviá) gets her period at the least convenient moment, but she doesn’t shrink from the blood. She turns it into war paint.

This isn’t Barron at her wildest: that would probably be 2016’s I’ll Never Love Again, in which she graphically reenacted her teenage sexual initiation while a robed chorus sang a libretto based on her childhood diary. But still, we’re looking at the techniques of performance-art provocateurs like Karen Finley and Carolee Schneemann in the midst of respectable theaterland. In Dance Nation, you won’t see more than you would in the changing room at Nordstrom’s, yet it’s a radical act of programming. I’ll Never Love Again played in Brooklyn, in front of an audience of post-millennial theaternuts; Dance Nation is demonstrating masturbation techniques to a room full of season subscribers. 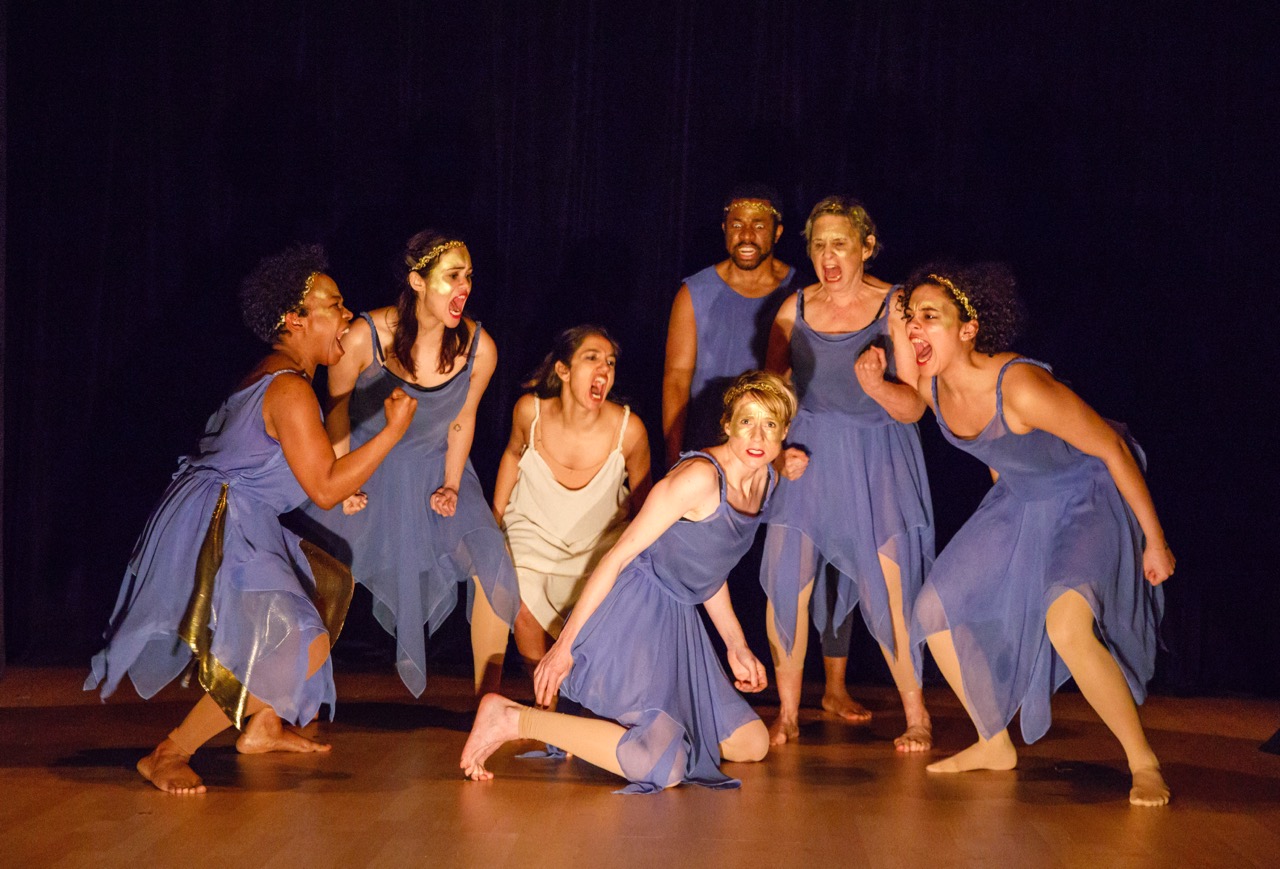 Barron’s work comes as the flood is at its highest—orgiastic, bacchantic girl-power plays have surged in the last half decade, from Julia May Jonas’s Dionysiac music-drama Evelyn (2012) to Tina Satter’s Crucible riff Ancient Lives (2015) to Sibyl Kempson’s postmodern neo-mythic Sasquatch Rituals (2018). And yet only now are mainstream audiences getting one. What changed? Well, at least some of the seemingly buttoned-up folks in that audience have probably worn (or knitted) a pussy hat in the past six months. In the Trump era, we can either be dismayed at vulgarity or we can reclaim it, and all waves of feminism—second, third, intersectional—seem to have agreed on “grabbing back.” And the #MeToo movement has done something else to us oldsters; it’s forced us to remember even happy pasts with a new filter, a new interpretative lens in place. Was that girl-against-girl competition something we wanted? And why, even in mostly female spaces, weren’t we safe from that rapacious male gaze?

This isn’t to say that Dance Nation is difficult viewing—it’s charming and whimsical; it shows us various types of friendship; it’s a heady, rich, goofy escape. But it shouldn’t elude us that we are sitting exactly where the dance studio would place the mirror. We are these girls’ reflection, and it can be hard to meet our own eyes.