Welcome to the jungle: a musical version of the classic tale hits Broadway. 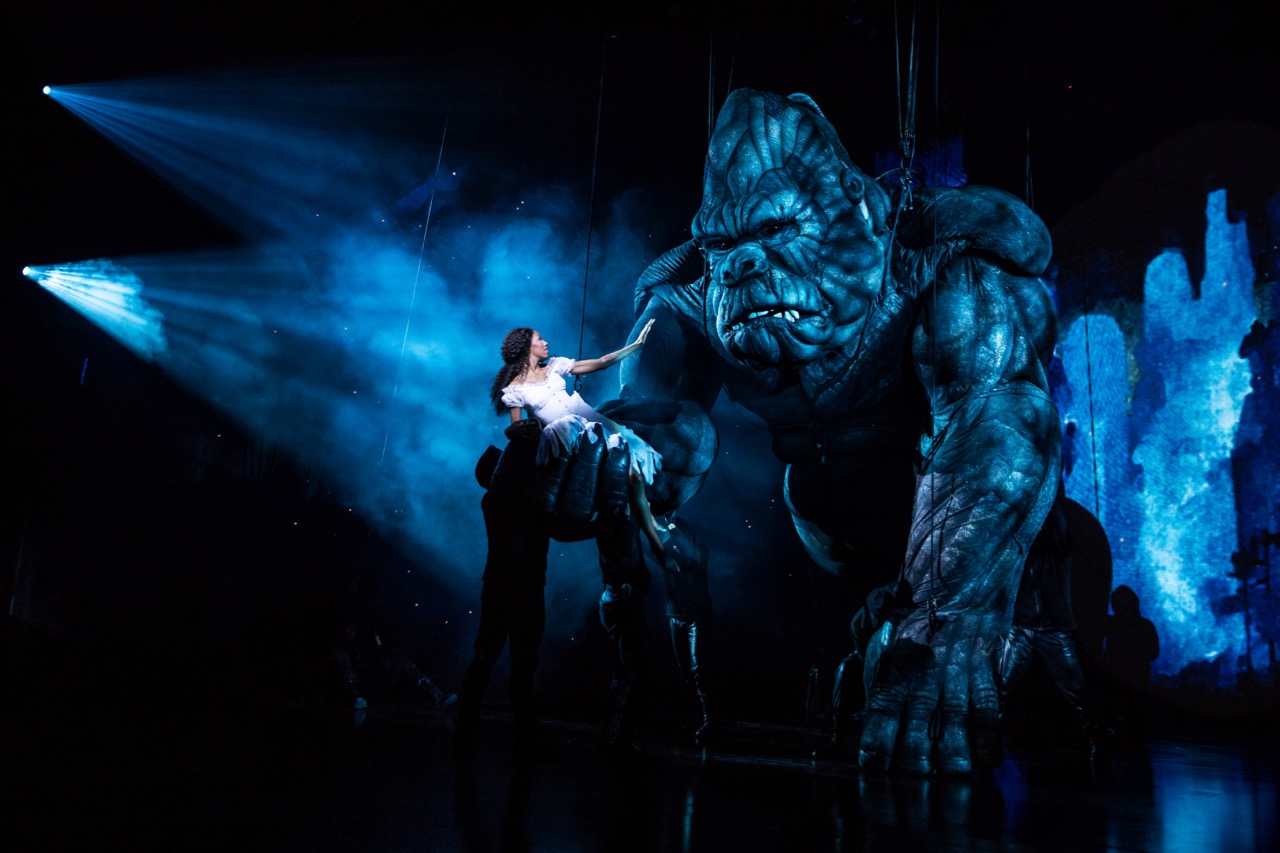 You don’t need me to tell you the story of King Kong. You already know there’s a film crew, an actress, an island, a big ape. You know beauty and the beast come back to New York; you know climactic things happen on the Empire State Building. Playwright Jack Thorne has rejiggered the tale in the musical now at the Broadway Theatre, but its old bones are in place—because without them, we wouldn’t have gotten our money’s worth. Any other version might be Kong, but it wouldn’t be Kong, the property.

It’s damn hard to make a piece of art to order, and even given that, King Kong seems to have been a particularly upside-down process. Ten long years ago, the Australian production company Global Creatures started work on their simian star, expecting that some kind of show (arena-style? theatrical?) would materialize around him. Confident from their megafauna megahit Walking with Dinosaurs, the producers and designers spent ages fine-tuning their one-ton Kong’s combination of puppetry and robotics, as various creative teams crashed into the project like waves against Skull Island. Playwrights Craig Lucas and Marsha Norman have come and gone, leaving no mark. There was a completely different, fully produced iteration of the show in 2013 in Australia, but the producers blasted that version down to bedrock. 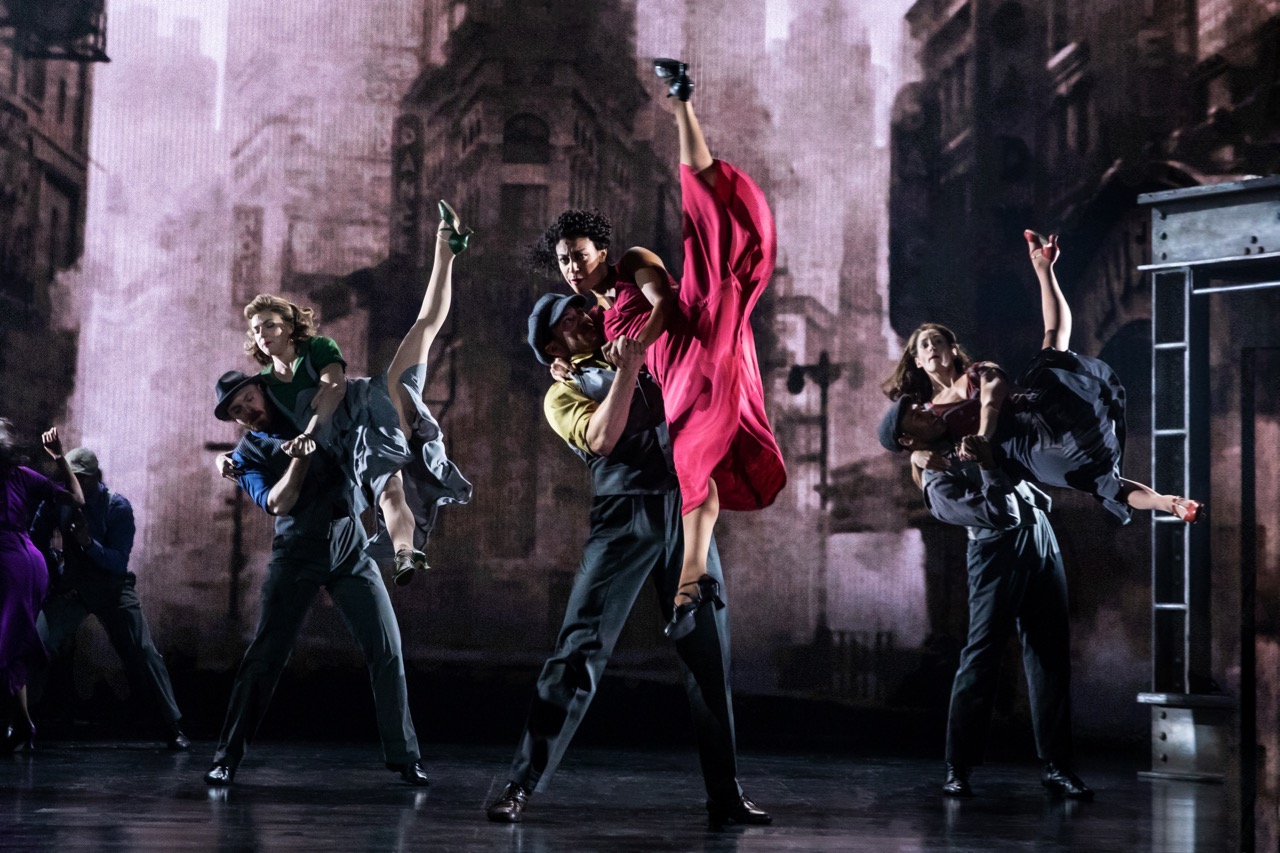 The Broadway team is therefore a combination of those who have been with the show for years and more recent hires brought in to reimagine a foundering project. No wonder, then, that there’s a tortured, often unintentionally hilarious quality to the current King Kong musical, a mish-mosh of Thorne’s strangely empty text, Marius de Vries’s cinematic score, and Eddie Perfect’s color-by-numbers pop-inflected songs. Director Drew McOnie has filled the show with stylized movement (people dance-fight, dance-flee, and dance-load-a-boat), yet designer Peter England’s wrap-around video environment makes McOnie’s non-realistic techniques look silly. (When your IMAX set can make an entire theater seem to be sailing through a heaving sea, mime-gestures become absurd.) No two of these elements belong together; it’s a series of shotgun marriages. 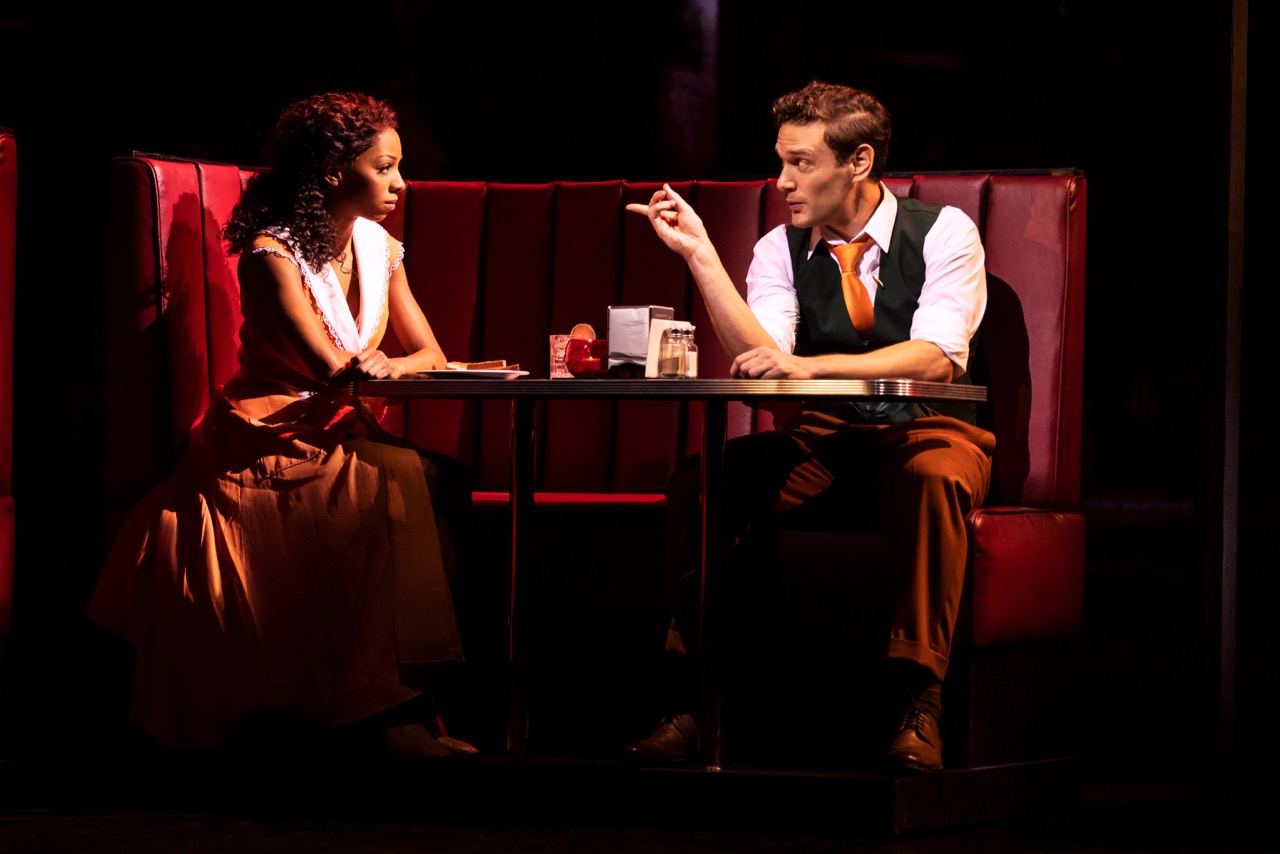 Thorne has obviously been asked to fix the 1933 film’s regressive sexual and racial politics—so he’s stripped out most of the characters and underwritten the few that are left. Actress wannabe Ann Darrow (Christiani Pitts) is now a young, black Midwestern gal who, everyone takes great pains to tell us, is no shrinking violet. “I’m just not a damsel in distress,” she says, stating her subtext. Ann’s come to New York to be a star, but it hasn’t worked out, and she’s gone on the breadline (McOnie choreographs some dance-starving). In a bar, she meets filmmaker Carl Denham (Eric William Morris), who buys her a sandwich and hustles her onto a ship (there’s a bit of dance-bale-hauling), where she encounters the show’s only other main human character, Denham’s helper Lumpy (Erik Lochtefeld). Lumpy does not affect the story in any way. Every now and then, people break into Perfect’s songs, which are both vacuous and risibly on the nose. The ship captain (Rory Donovan) sings a song called (keep the) “Pressure Up,” seemingly as a way to persuade the audience that the show has not gotten boring despite their having been at sea for two months. 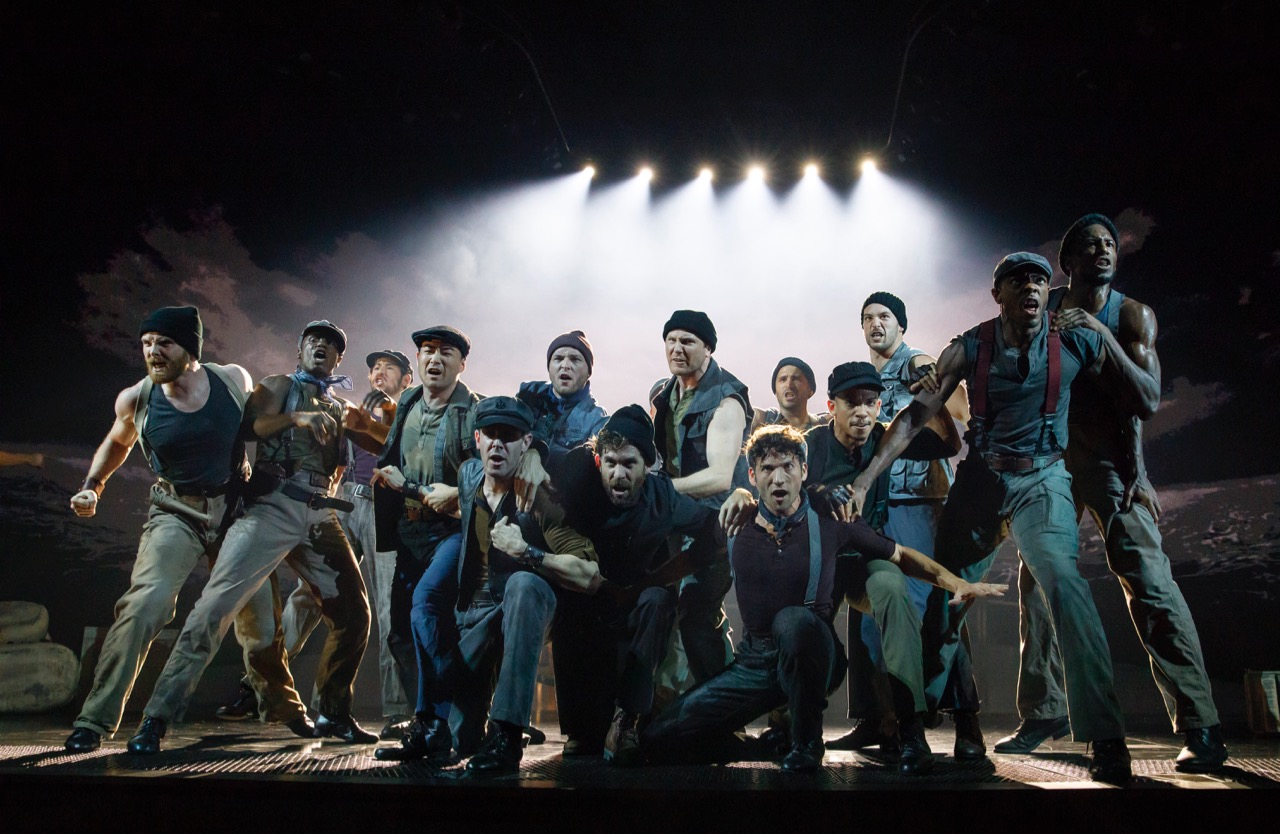 Yet in the center of all this embarrassment is something deeply, even primally impressive. When Merian C. Cooper invented King Kong in 1929 and filmed him in 1933, he wanted him to be “the fiercest, most brutal, monstrous damned thing that has ever been seen!” Ninety years on, though, we think of Kong as noble and doomed. Some time since the ’30s, the monster became a perfect environmental metaphor. Imagine that huge brain in there, we think. Imagine all the irreplaceable things we’ve killed.

And Kong’s entrance is the best thing in the show. Up until his emergence, Skull Island has kind of been a bust. With all the natives-of-the-isle stuff from the original wisely excised, Thorne hasn’t given our explorers much to do other than dance-hike through a downstage slice of “jungle.” The gang eventually encounters some “sentient vines”—aerialists covered in string cheese who strap Pitts into her flying rig—and the tendrils snatch Ann up into their web. She doesn’t scream, per se, since she is not a damsel, but she does give an outraged yodel. There is a far-off, basso profundo roar. And then in the pitch dark beneath her, we sense a shape. 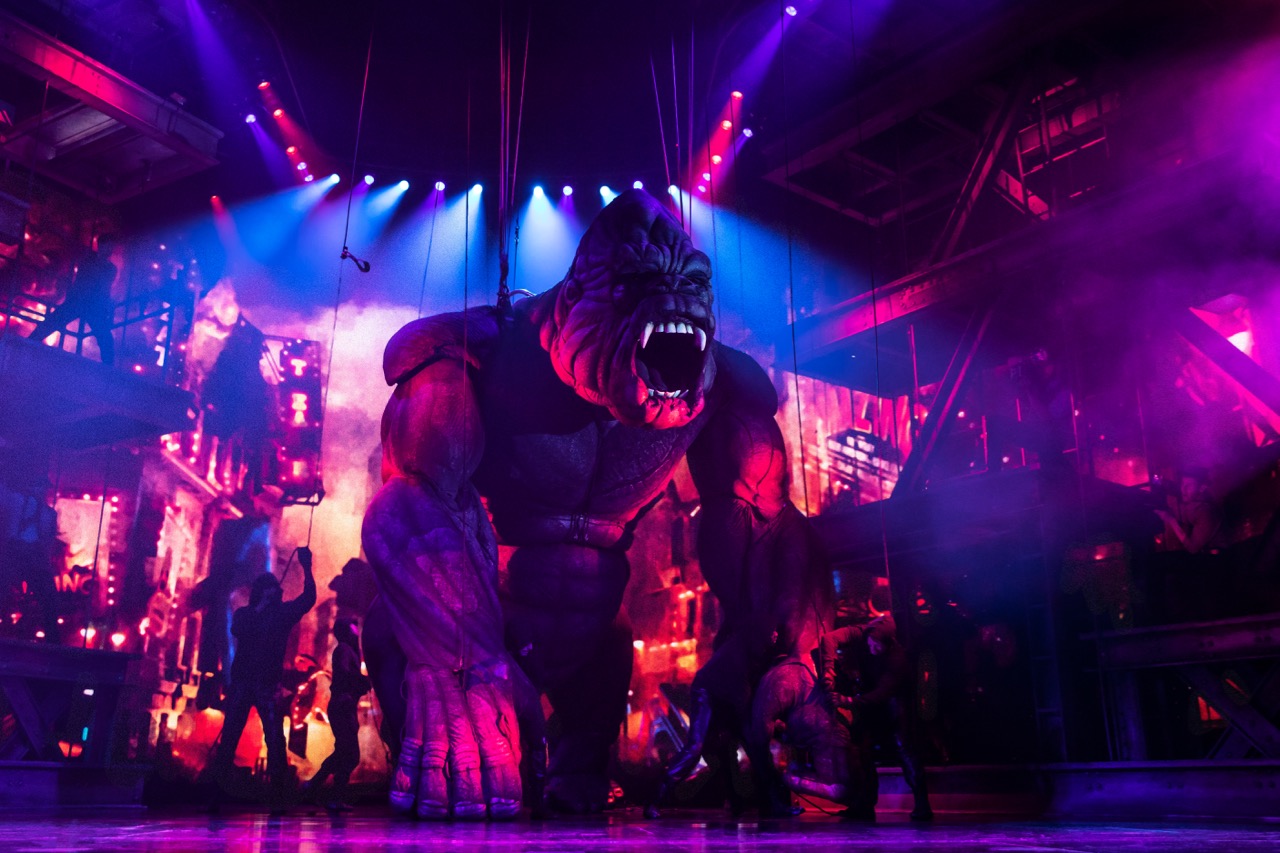 There is a snuffling. And we see, just barely touched by the light, some bared fangs—a mouth is opening about twenty feet in the air. The teeth go back into darkness. The dread mounts, the rumbling sounds build. And then . . . KONG APPEARS. He’s huge, which you expect. What is surprising is that he is so, so, so beautiful—as beautiful, really, as an animal. His perfectly sculpted head sits heavy on his neck; his sway gorilla-back has an external metal spine that lets operators scramble over him, like fleas in fur. It takes thirteen people to give Kong life: ten onstage puppeteers moving him around with hawsers connected to his complex marionette rig, and three more in a booth running his advanced animatronics and doing his voice. But there seems to be a fourteenth intelligence in there too—the secret one that some puppets have.

Kong stands forward, showing us his incredible bulk as the audience goes bananas. And then he grabs Ann and makes a break for it. He seems to run straight at us: the cyclorama video screen flickers with motion; the effect of the ape in full stride has been worked out to perfection. The illusion is utterly thrilling. England and creature designer Sonny Tilders are the two craftsmen on the project who seem to have worked completely in sync—and while the music in King Kong isn’t wonderful, the noise has got our number. Sound designer Peter Hylenski brings in the vibrate-your-teeth Hans Zimmer BWAAAAAAH sounds, and the subwoofers dropkick the cynicism right out of your shuddering body. The running sequence synthesizes pure spectacle—it’s a humane circus, melodrama climax, and technological marvel all in one moment. End! End! I thought, even though we weren’t even at intermission. The Greeks would tell you that a happy man dies at his peak. 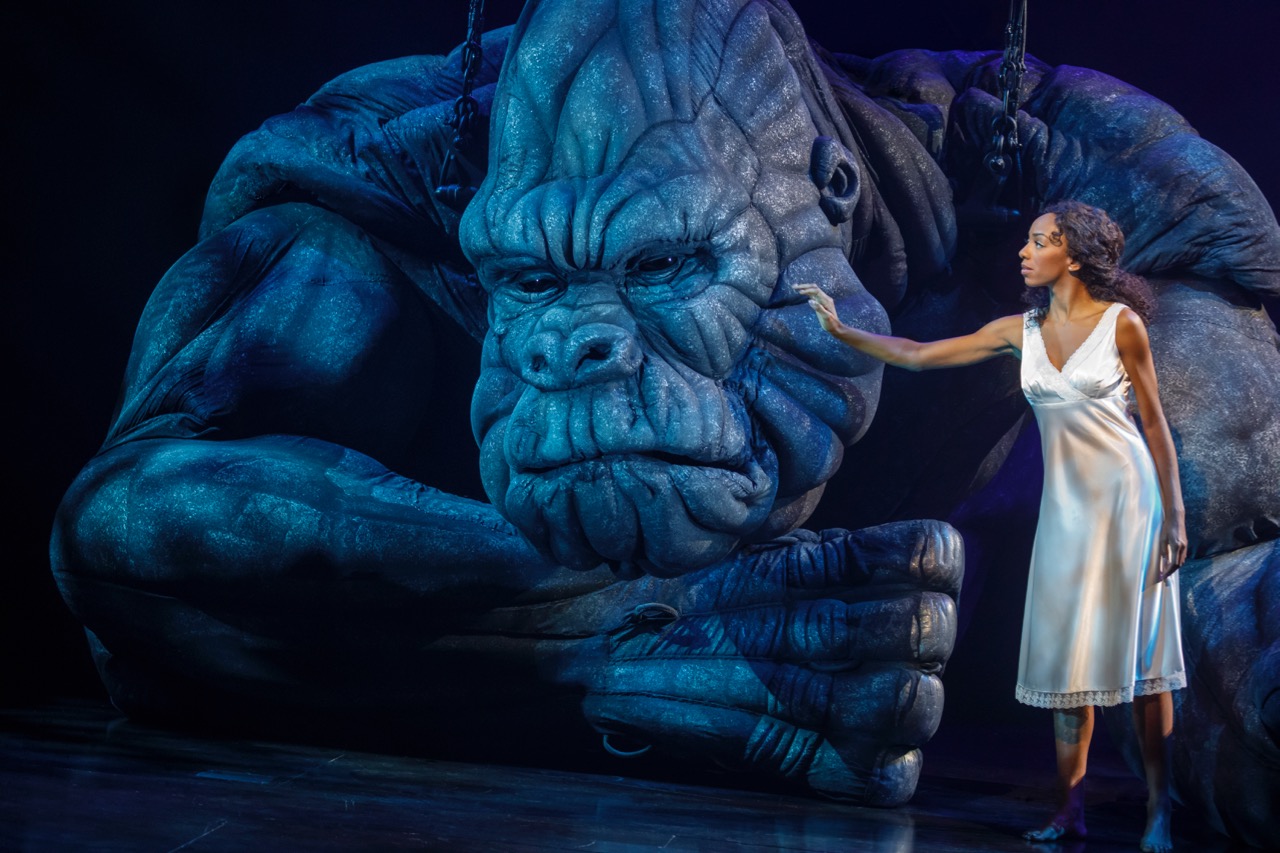 But there’s more to go. If you loved the running-with-video effect, that feeling might diminish as you see it several more times, once in a cringingly dorky version that makes Kong look like he’s diving through a Diet Coke commercial. The songs get longer and louder, and Ann manages to make several ugly, venal choices and yet maintain her outraged righteousness. A flicker of wit in the second half does make you wonder what might have been: Thorne and Perfect do a nice job of mocking up the show that Carl Denham—now fancying himself a theatrical impresario—plans to stage on Broadway. In a funny rehearsal scene, dancing girls with cardboard cut-out waves do Denham’s entertainment, a goofy pastiche of ’30s musical numbers. The manacled Kong stares sadly down, making the fuss all seem petty and vain. We see how ridiculous it is to do a crummy musical next to something so big, so true, so magnificent. Oh, you poor $35 million show—know thyself.