Whiskey, the devil, and jigs: an immersive play meets the experience economy. 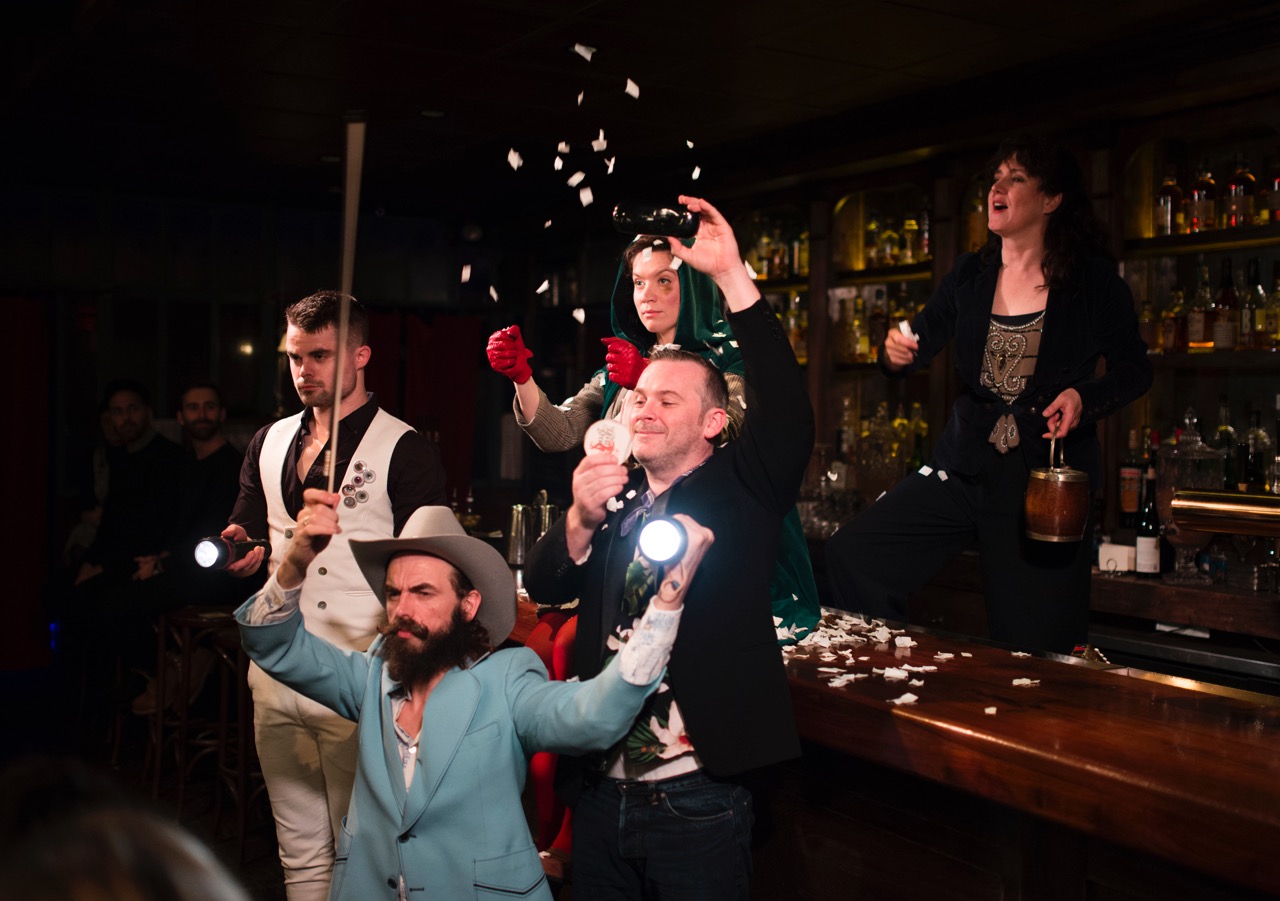 The cast of The Strange Undoing of Prudencia Hart. Photo: Jenny Anderson.

The Strange Undoing of Prudencia Hart, by David Greig and the National Theatre of Scotland, the McKittrick Hotel, 542 W. Twenty-Seventh Street, New York City, through February 28, 2017

The National Theatre of Scotland has secured the perfect New York venue for its immersive play The Strange Undoing of Prudencia Hart: it has taken over The Heath, the bright tavern tucked away in a corner of the McKittrick Hotel. The McKittrick is the Punchdrunk theater’s elaborate Chelsea complex, where (elsewhere in its warren-like structure) the company’s noir-esque promenade show Sleep No More has been working its weird magic for the past five years. The McKittrick’s restaurants and bars have been designed to echo Sleep No More’s lost-in-the-attic beauty—so at The Heath, taxidermic wolves snarl in the rafters, fairy lights glimmer overhead, and there’s the deep glow of wood everywhere. When we enter, stamping sludge off our shoes, the Prudencia Hart cast is playing Scottish reels, and the staff sends us through the clutter of cloth-covered tables to the bar for our free shot of whiskey. The cold outside melts away; the sense of welcome is . . . extreme.

David Greig’s song-filled verse drama (large chunks are in couplets) is conceived as an olde-fashioned pub session, where the music playing and pint quaffing are all part of one merry meeting; we’re thus immersed (the biggest buzzword in staging today) from the start. Five performers play all the instruments and act out the tale, moving around (and sometimes over) our tables, with a sense of accelerating glee. Co-creators Greig and director Wils Wilson lavish us with music and opportunities to join in: before the show begins, the actors pop ’round to ask us to tear up our cocktail napkins so that we can make “snow” to throw in the air for our heroine’s entrance. Even if you’re averse to audience-participation, Wilson does it deftly enough—just a hand on a shoulder, or a quick football chant—that the staging warms you to it. 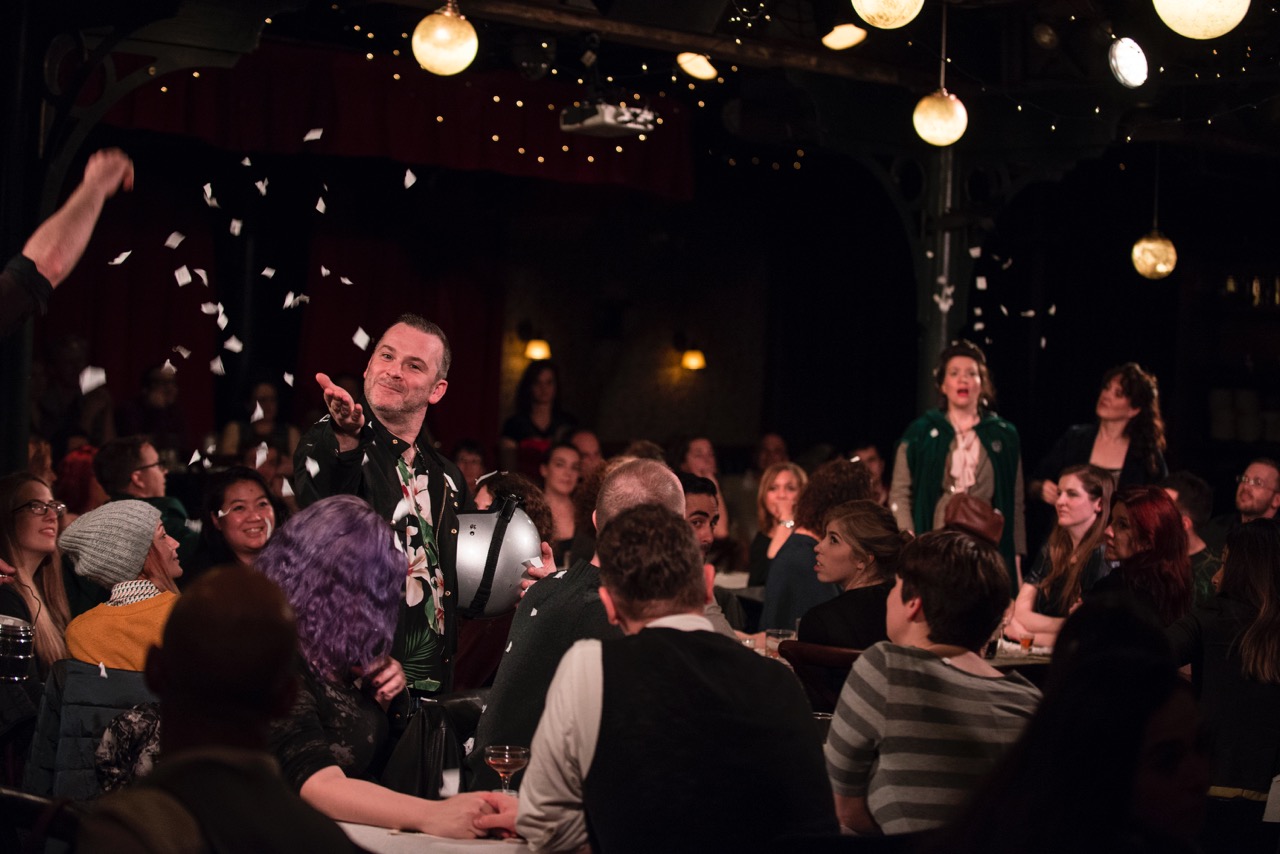 This tale of prudish academic Prudencia (Melody Grove), who is “undone” by a supernatural encounter, has a terrific first act. In its opening scenes, Hart is a satire on academia: Prudencia just wants to talk about nineteenth-century ballads at a Scottish oral-narratives conference, but she winds up tartly annoyed by everything from research jargon to her matey colleague Colin (Paul McCole). She adores the Scottish stories and their artistry—but Colin and his post-post-structuralist ilk have smothered their appreciation in theory, strangled it with politics. It’s an odd preoccupation for a play aiming for a non-academic audience, but in execution, it’s still very silly and dear. “Putting ‘Scottish’ in air quote / Made Prudencia want to punch him in the throat,” the narrator (Alasdair Macrae) tells us as Colin yammers on.

Ballads, Prudencia’s specialty, are often about the uncanny abduction: virginal women are forever falling prey to mysterious gentlemen at the hedgerow, or elven fiddlers dance a girl to ragged shreds. Yet despite all her expertise, Prudencia is soon led astray herself. A blizzard strikes, and she wanders out into the snows looking for her B&B. “Left and left and left again” reads its business card’s directions, and Prudencia begins to walk widdershins at midnight—a bad move for anyone who knows their fairy tales. A lovely sequence, lit only by headlamp, ensues, in which Grove wends among us, lost in the blue dark. A mysterious woman (the gifted Annie Grace) rises up singing an eerie high song of warning, but Prudencia plunges on. When she finally finds her host, a friendly but slightly brimstone-y chap named Nick (Peter Hannah), we’re hardly surprised to learn that here’s Old Nick himself, and Prudencia will have to live an eternity with him before she finds a way to break free.

There’s a major sloping off, though, in the half that follows intermission, when Greig gets himself into a corner and can’t write himself out. How can Prudencia turn the tables on Old Scratch? Greig doesn’t actually seem sure, and the piece wobbles into creepy romance just so Prudencia can seduce her way to the Devil’s key. The messages of the piece become troubling: Prudencia is roundly punished for both her love of scholarship (“None of it matters!” she cries in revelation near the end) and for thinking that Colin’s chummy sexual harassment is kind of gross. The “undoing” in Greig’s text becomes a kind of forced let-it-hang-out salvation, an unwinding of Prudencia’s tight little chignon, the unlacing of her schoolmarmish blouse. The hedonistic pleasure of the music, which accelerates into a gorgeous show-ending jig, is necessary to clear some of this fug away—to make you forget the sudden decision that Prudencia needs “a knight,” say, or to forgive the way she’s browbeaten into love. 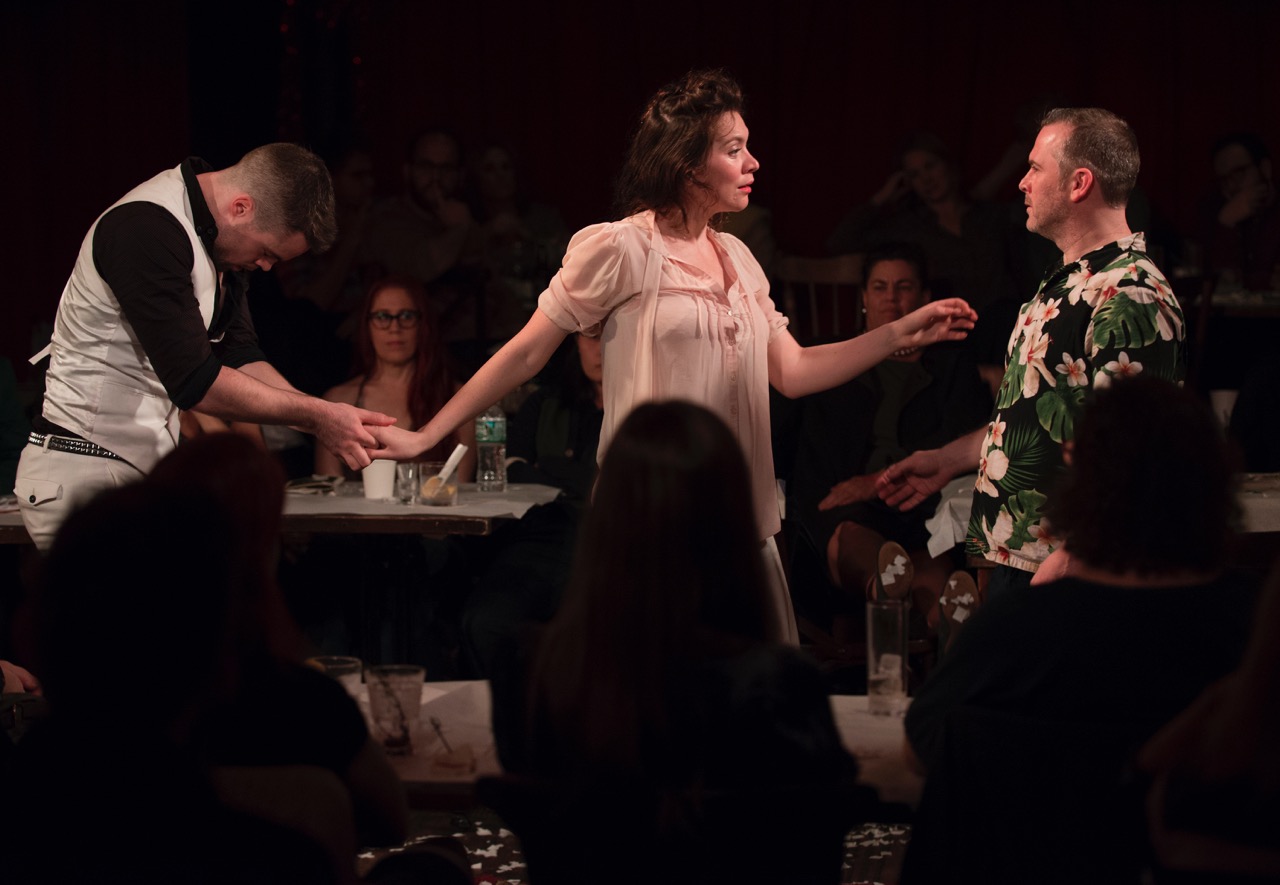 Immersive staging, actually, does just that—it browbeats us into love. Everywhere we look now we see such work, from promenade productions like Sleep No More or Then She Fell to the environmental setting for Broadway’s The Great Comet. After you drink with Prudencia, and grab your pierogi from Pierre, you can go eat a multi-course meal at the Irish Rep’s setting of The Dead, 1904. Why this surge toward immersion? At one level, I think it’s a product of anxiety; theater makers are panicked about keeping our attention in this distracted age. Wandering the dim hallways of the McKittrick Hotel and juddering upward in its paneled elevator feels more like playing a video game than visiting a theater: it’s a show as first-person shooter experience.

But while all this immersion is an attempt to respond to the new forms, it also makes deep use of the old. This type of environmental theater, particularly the stuff that includes food and drink, employs the most ancient social norm there is: once you eat at a man’s table, you can’t take arms against him. When someone offers us food, he overwhelms our critical faculty—the familiar transaction of coin-for-entertainment has been transformed into the guest-host relationship. Is it a coincidence that we also start to forget the sting of the ticket price?

Tangible, taste-able communality in theater is an old technique—think of the Marxist Bread and Puppet Theater passing out its homemade sourdough at free performances for fully forty years. But now the trend (largely thanks to the success of Punchdrunk itself) has come roaring out of the “poor” theater and into the rich. It’s a truism among artistic directors now that theaters need to participate in the “experience economy.” AdAge runs stories like “Three Tips for Brands to Create Meaningful Experiences with Consumers,” and playmakers follow them. To be clear, there is real artistic generosity in Prudencia Hart. The company of five are all strong, sweet players, each delighted to pick up the bodrhan or fife or fiddle and to delight us in turn. But all around them, you can sense this commercial production marketing itself to you over and over. At the bar, waiting for your free whiskey, your gaze might light on the seventeen-dollar cocktails available. And at $125 a ticket, that free whiskey isn’t altogether free. I hate to sound grouchy about a show made with such palpable joy—but in Edinburgh five years ago, it didn’t cost the Earth to see; when the same show played in Miami, it cost thirty bucks. Prudencia Hart looks like a cheery night in your neighborhood pub, and every design effort has been made to make it seem local, intimate, like a bit of magic you’ve just happened to stumble upon. But “immersion” means the producers get to retail it as the last word in high-dollar spectacle: they’re charging what the experience market can bear.