Sophie Fiennes’s absorbing documentary pulls up to the singer. 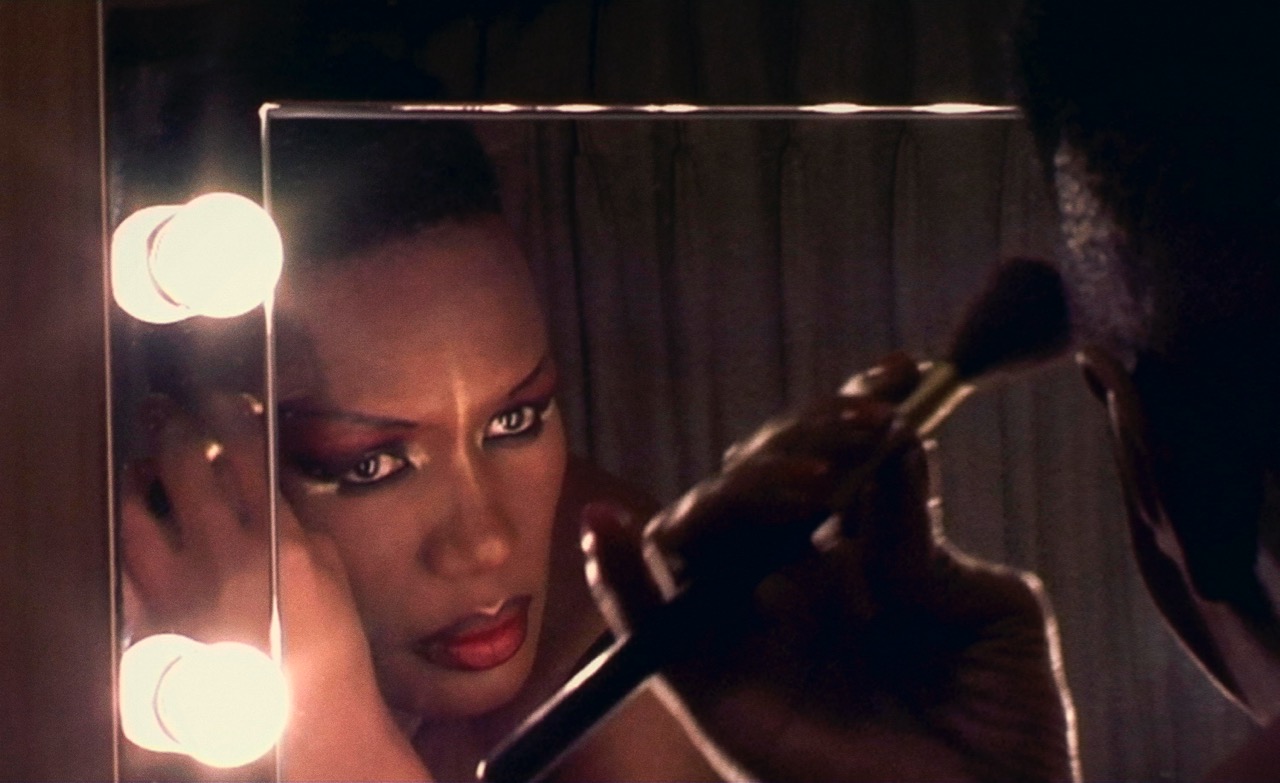 Sophie Fiennes’s Grace Jones: Bloodlight and Bami is notable for what it is not. It is not a lamentation for The Aging Woman, and the film has little relationship to nostalgia. It is not filmed in the exploitative spirit of conventional music documentary, although stylized concert footage constitutes nearly half its runtime. And if the film is a biography, it is an allusive one unmoored from chronological time. The director’s gaze is furtive, in this strange and engrossing portrait of the recombinant performer Grace Jones, who arrives to the enthralled viewer through a litany of impressions.

Impressions of Jones rotating in her eternal hula hoop, a childlike device that she admits, in her 2015 memoir, has provided her with “a form of protection.” Impressions of Jones in Spanish Town, Jamaica, the place of her birth, sucking up the juice of a coconut; a vignette of Jones backstage at a television show in France, having striped her face in her particular reds, preparing to perform her disco interpretation of “La Vie en Rose.” It is a fever dream scene, Jones approaching the sound stage in a sequined suit and coordinating headpiece. “I look like a bug from outer space,” she mumbles. The stage is drowned in a queasy pink. Dancers in baby-doll slips vamp around Jones, who is astride a stool in dominant pose. Many in the French crowd, which include children, sway in unison like they are possessed by something outside of music. Afterward, Jones admonishes the director of this televised farce. “If someone showed me a picture, with all these women around me like that, I would say, ‘I am a pimp!’” 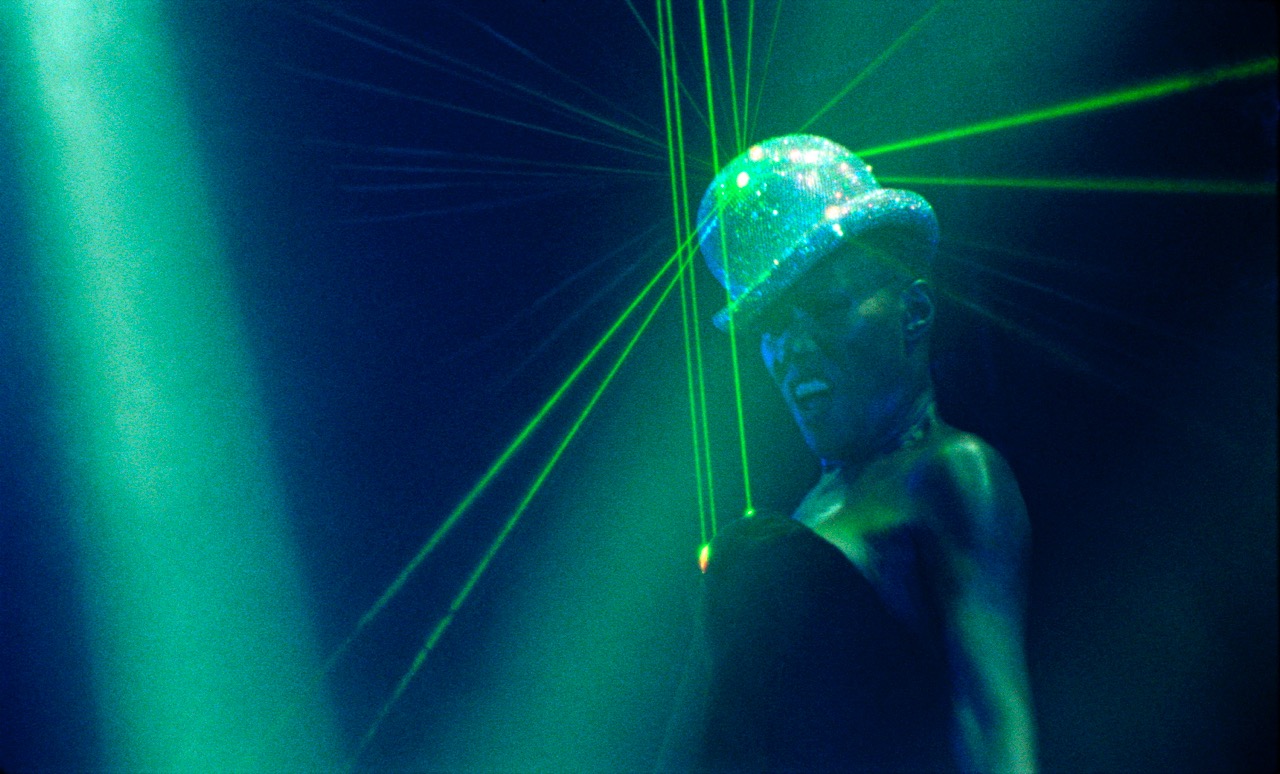 The director apologizes, vaguely, but it is evident that it was his fantasy to see Jones as dominatrix. His faux pas stands in for the viewer’s languid desire of seeing Jones through the perversion of legend. Bloodlight and Bami does away with the stubborn construction of Jones as sentient muse. Grace Beverly Jones and her siblings moved to Syracuse, New York, when she was thirteen years old, to be with their parents. First downtown Manhattan, and then Paris, called her, and eventually, Jones would become a glorious insurgent in a culture war against etiquettes of race and gender. Fiennes has only included documentation of the past decade-plus of the purportedly sixty-nine-year-old’s life, as she records an album, caresses the soft head of her newborn grandchild. There are no captions indicating place or date, no talking-head interviews. We become adrift in the world of Grace Jones. 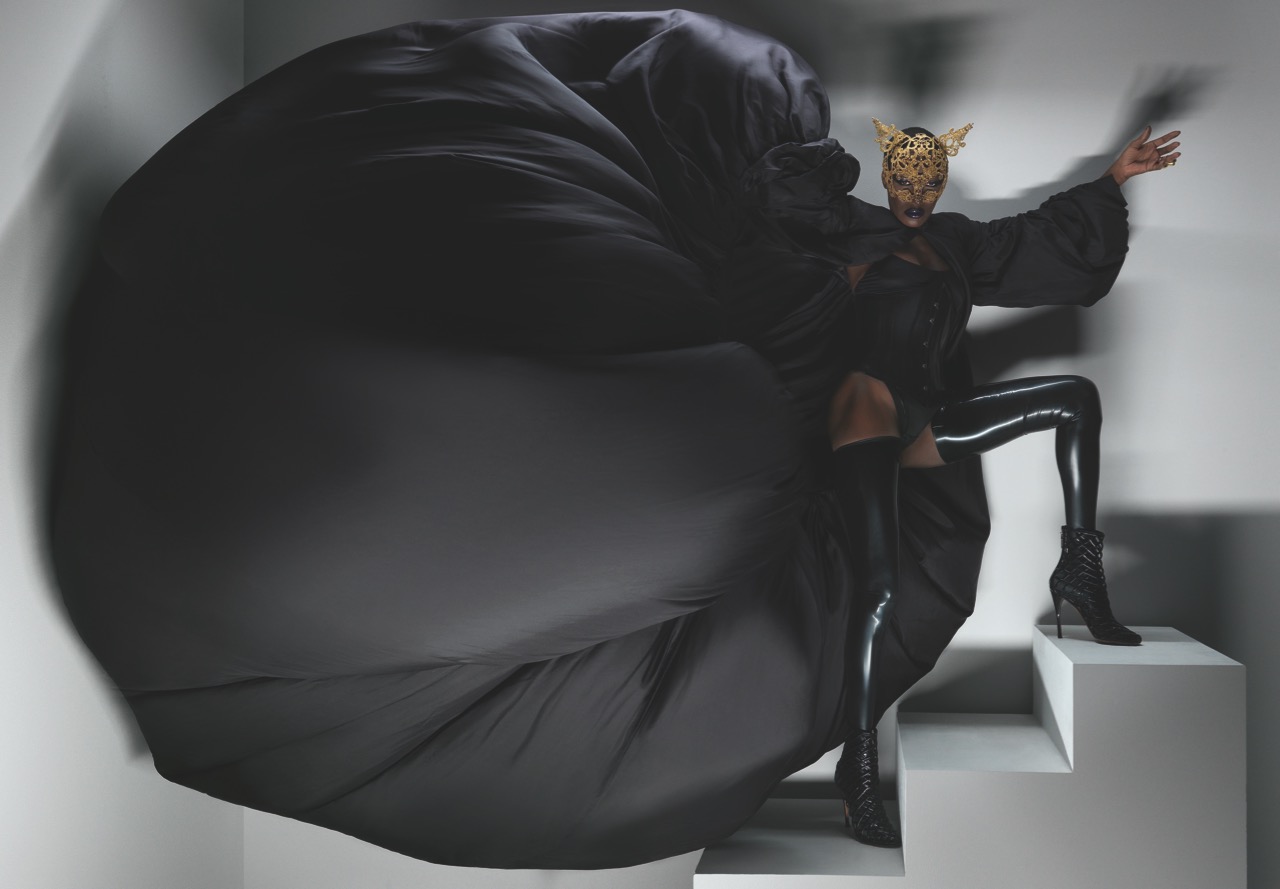 The most prominent lack in the film is that of archival footage. The potency of, say, Jones in Vogue, of Jones contorted through the erotic race visions of Jean-Paul Goude, would cause Fiennes to lose control of her subtle vehicle. “The father of my son is Jean-Paul Goude, from Paris. We did a lot of crazy pictures together, you know, the ones you all collect,” Jones drawls to a Parisian audience, referencing the album cover of 1985’s Island Life as if it were a totem. In his photographs, Goude broke and idealized her body through graphic manipulation. Together they made Jones a living illusion. “I became jealous and possessive of the character that, through her, I was able to create, much more than the person,” the photographer has said. Fiennes gives an oblique and frustrating education of their bond. The camera pushes in on the two, who are chatting after a photo shoot, for the cover of Hurricane, her tenth, and most recent, studio album. Goude asks her if he really was such a brute, when it came to his infamous “jungle fever.” She assures him no. Her eyes, however, look ablaze.

This is the rhythm of Bloodlight and Bami, tacking from disclosure to effacement, folksy verité to extravagance. It takes its cues from Jones herself, who is like a second director, one fluent in the language of mythmaking. The seasoned documentarian Fiennes has crafted collaborative portraits of eclipsing figures before, Slavoj Žižek twice. And though it is a predominantly suggestive text, Bloodlight and Bami counts as a didactic guide; Jones teaches the sensual politics of self-creation. Fiennes catches the change in accent that Jones, a pupil of Euro-cosmopolitanism, undergoes each time she travels: in Spanish Town, she slips into patois, and in Europe, she slurs in French. One of the film’s patterns finds Jones in a studio in Jamaica, recording for Hurricane with her longtime collaborators Sly and Robbie. She gripes about money not going through, and sometimes her graveled singing voice fumbles unintentionally. She incorporates the falters, when she performs onstage in sets of saturated light. And it is completely mesmerizing, watching Jones, in bustier and wimple, subverting her own masks. “I could perform in complete darkness,” she gloats over room-service breakfast in a swank hotel suite. 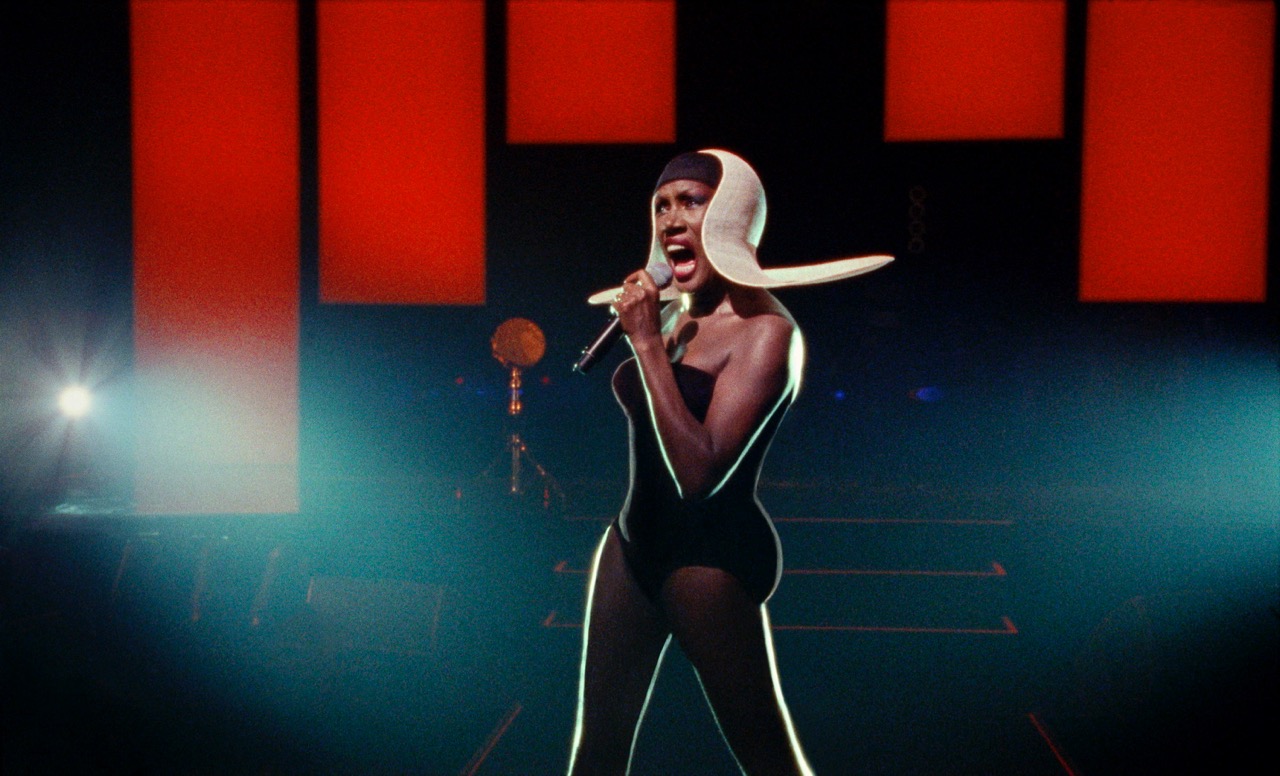 The disco classics get their due—“Pull Up to the Bumper,” “Warm Leatherette,” and “Slave to the Rhythm”—but Jones’s newer music endows the film with its most ambiguous revelations. Fiennes carefully follows Jones as she speaks with her siblings about the abuse inflicted upon them by her step-grandfather and de facto childhood guardian, Peart, referred to as Mas P. Jones reminisces that he had a collection of “straps” that he would consult before giving his charges beatings. She discloses that she sometimes summons Mas P’s cruelty onstage. She has mentioned him before, and Fiennes does not set up the confession as the ultimate, tragic explainer of Jones. It is an episode in the life of a woman who has lived in fugue. She had flaunted her disinterest in hagiography long ago, because the act countered with her fundamental belief in the right to change her mind. “I’ll never write my memoirs,” she sang on “Art Groupie,” from Nightclubbing (1981). And then she released a thrilling autobiography in 2015, using that declaration as its title. Bloodlight and Bami is remarkably flexible, capturing her vagaries without seeming to judge them.

A disarmingly personal song called “Williams’ Blood” anchors Hurricane. Listen to Jones moan, “You can’t save a wretch like me.” In Fiennes’s film, Jones’s performance of it is followed by her rendition of “Amazing Grace.” One of her siblings, Noel, is a well-known preacher, just as their father, Robert W. Jones, had been. Religiosity is the one force that seems to overwhelm her. At one point, she takes a swig from a wine bottle before entering a Pentecostal house of God. She might have said that her brother absorbed the Jones blood while she has the blood of the Williams, her mother’s line. It is the feminine pulse of music, and of pained self-satisfaction. Marjorie, a church Mother as well, who passed away in October 2017, sings “His Eye Is on the Sparrow” at her son’s service. Her voice is shrill and impassioned, and her daughter, standing in a pew, eyes closed, hands in open praise, lets her mother’s spirit work on her. Bloodlight and Bami presents the Grace Jones who was forged in the limbo between the public and the private, the daughter and the symbol, the director and her subject.

Doreen St. Félix is a staff writer for the New Yorker. Her work has appeared in the New York Times Magazine, New York magazine, Vogue, and others.