A writer’s exploration of Frank O’Hara begins—and ends—with her relationship to her father. 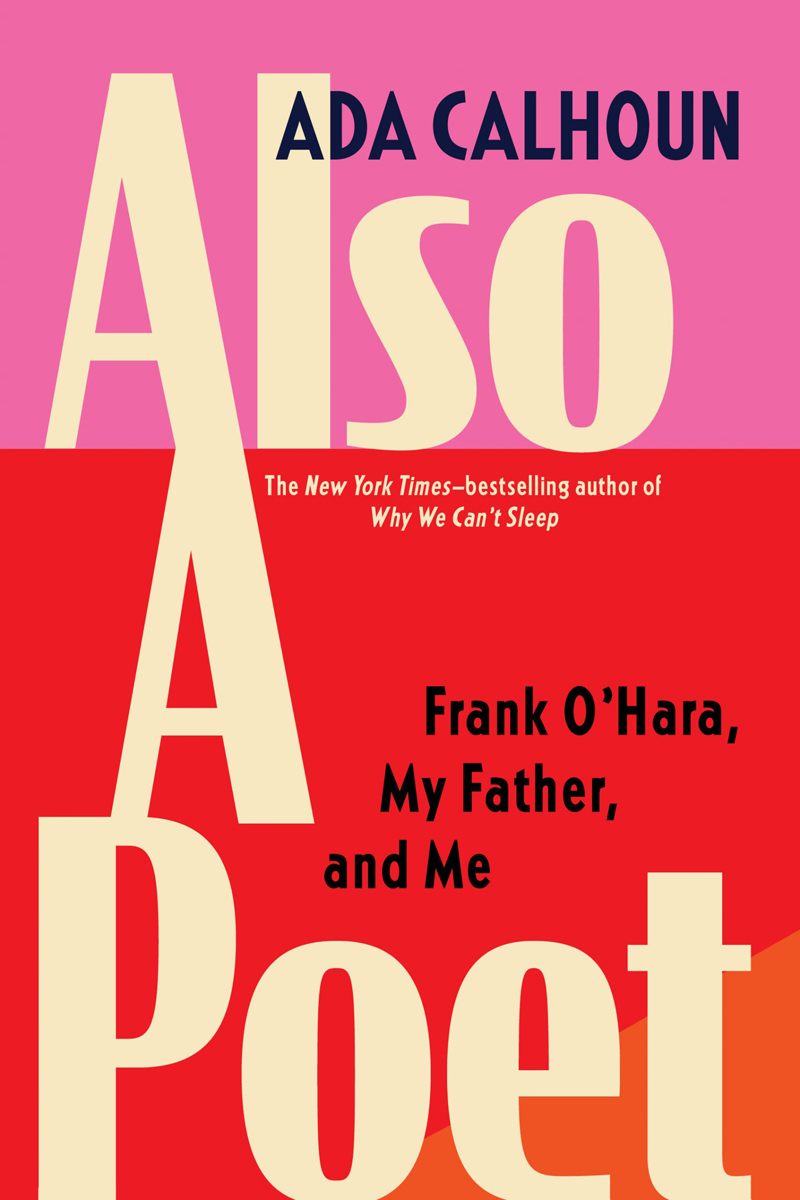 In Also a Poet, Ada Calhoun presents herself as the opposite of her father, celebrated art critic Peter Schjeldahl: where he is a flake, she is a reliable presence; where he is a tortured artist, she is a hard worker. Yet these two very different people share a common love for writing and for the poetry of Frank O’Hara, who serves as the fulcrum for Calhoun’s moving memoir of her fraught relations with her father. At first, Calhoun’s book aspires to be a biography—the completion of one on O’Hara that Schjeldahl began in the late 1970s but had to abandon when the poet’s younger sister and executor, Maureen O’Hara Granville Smith, withdrew her support. (We learn why over the course of the book.) Rummaging through the basement of her parents’ East Village apartment some forty years later, Calhoun discovered dozens of cassette tapes containing interviews between Schjeldahl and O’Hara’s friends, lovers, and colleagues. She takes up the tapes and the task of finishing Schjeldahl’s project—of accomplishing what her father could not and thereby both earning his elusive approval and besting him in the bargain.

A longtime journalist and author of three previous titles, including the New York Times bestseller Why We Can’t Sleep (2020), Calhoun is secure in her professionalism. Surely she would prevail where her father had stumbled. She starts researching O’Hara, sends a “journalist inquiry” to Maureen, and begins listening to Schjeldahl’s interviews, which she quotes from and summarizes for the reader. A picture of the poet emerges. Born to a Roman Catholic family in 1926, Frank O’Hara grew up in Grafton, Massachusetts, and served in the Navy during World War II before attending Harvard on the GI Bill. A gay man, O’Hara engaged in furtive liaisons that became increasingly open after he moved, in 1950, to Manhattan—his most enduring muse. There, he became part of the New York School, a group of poets (including John Ashbery, Kenneth Koch, Barbara Guest, and James Schuyler) and first- and second-generation Abstract Expressionist painters (Jackson Pollock, Willem De Kooning, Larry Rivers, and Grace Hartigan, to name a few). At the same time, he worked at the Museum of Modern Art, first at the front desk and later as a curator.

For Schjeldahl, who began his career as a poet, O’Hara is both an idol and a role model. In an interview with a Harvard classmate of O’Hara’s, Schjeldahl declared that the writer and his compatriots in the New York School “made his life possible.” In Calhoun’s account, that life—of writing, being a bohemian, and drinking (he didn’t get sober until she was sixteen)—held little room for his daughter. But he did introduce her to O’Hara, and she was entranced: “There was something about his poems that made me feel like I was sharing a wonderful secret. A verse about how a drink tasted or a city block looked felt like an invitation to another world.” Those in O’Hara’s orbit were similarly ensorcelled by the man and his words. Both were witty, charismatic, and urbane, and embraced art, high and low. (Rachmaninoff appears in O’Hara’s poetry; so does Lana Turner.)

Also a Poet unfolds as if in real time. Along with excerpts from Schjeldahl’s interviews, which reveal the singularities of O’Hara’s character—his devotion to cocktails, close friendships, swimming in rough waters—we read about Calhoun’s young son Oliver and visits to her therapist. We hear about the author’s childhood, her stubborn memory—and continued feeling—of not being “interesting” enough to merit her father’s regard. We also learn of Calhoun’s increasing concern as pages turn and Maureen fails to respond. Finally, about midway through the book, she does, and the project is vetoed for reasons that are both confusing and contradictory. As Calhoun notes, without access to O’Hara’s words, she will never be able to complete the traditional biography to which her father aspired. “Anything authorized or definitive was out. Anything I’d make out of this material would have to be some strange, subjective thing.” And this, we realize, is what we’ve been reading, this blend of biography and memoir: part tale of a poet Calhoun loves; part reckoning with a father who loves her, but not well. But her book isn’t “strange,” as she fears: it’s engrossing and deft in its juggling of multiple genres.

Not surprisingly, Maureen’s rejection leads Calhoun to question her professional worth, which, with similar inevitability, means comparing herself to her father. Without lapsing into self-pity, she wonders if her “role as a writer who is not the best writer in my family is the cost of paying attention to my family.” Of course, there is no way to tell, but, as the book continues, what does become clear is the degree to which Schjeldahl benefits from the balance his daughter has struck between life and work. A few months after Calhoun hears from Maureen, Schjeldahl is diagnosed with advanced lung cancer, then the family’s apartment on St. Marks Place burns down; next, COVID hits. Through it all, Calhoun offers her unstinting efforts and no-nonsense affection. She goes to doctor appointments, buys new sheets and root beer, finds her parents a sublet, takes her father to see the Mets. And she confronts Schjeldahl when he pits Calhoun against Spencer, his best friend and protégé, in the process of selecting a literary executor: “You’re trying to make Spencer and me hate each other,” she announces forthrightly. “You want us to fight over you.” Schjeldahl acknowledges his manipulation and apologizes. He also sends what could be described as fan mail after an evening spent together: “If I weren’t your dad,” it reads, “I’d wish I were. Or your brother or poker buddy or grocer. Anything, to know you.” This kind of affirmation is precisely what Calhoun has always longed for, but when she finally receives it, she is mistrustful. What, she wonders, will Schjeldahl do next. As if in response, he throws a book she has given him in the kitchen garbage, where she can easily see it.

There is no resolution or happy ending here, except one: Schjeldahl responds positively to a course of immunotherapy and is alive today to read his daughter’s text. A project marked equally by honesty and warmth, it closes on a note of reconciliation, with Calhoun transcribing a recording she found amid the O’Hara tapes of Schjeldahl and her then two-year-old self singing nursery rhymes—a testament to the moments of togetherness they have managed, despite it all, to share.