Art of the mouth, art of the belly: a large solo show of the sculptor’s work. 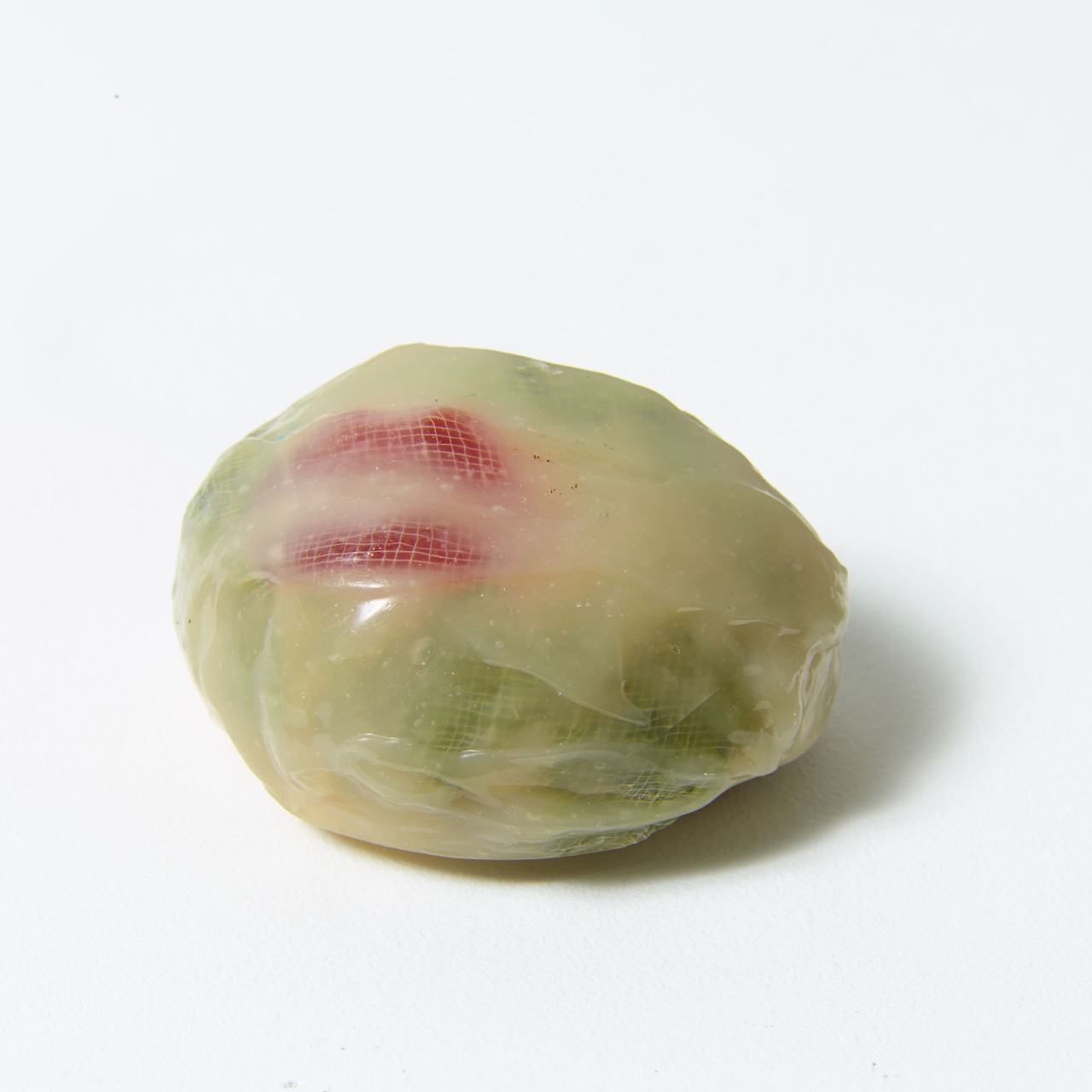 Polish sculptor Alina Szapocznikow moved to Paris for the first time in November 1947, and nine months later Romanian poet Paul Celan emigrated there, too. They were among the many “concentration camp children” (as an old classmate of Szapocznikow’s called her) who wound up in the French capital during those months, when the countries to the east were tumbling to communist regimes. Their proximate arrivals might not be a surprise, then, but what’s startling is that Szapocznikow and Celan both died in Paris only twenty-odd years later—Celan in 1970, by suicide, at age forty-nine; Szapocznikow in 1973, from breast cancer, at not quite forty-seven. That the diagrams of their lives are so similar throws into relief one decisive difference that seems less accidental. While understood as a figure tortured by loss and his experience of the camps, Celan is now widely viewed as a master of modernist literature whose work transcends biographical fact. Szapocznikow, on the other hand, is often presented as simply a figure tortured, and her work, however funny and sensual it may sometimes be, as forensic evidence of her tragedy.

There’s a telling film playing on the top floor of Hauser & Wirth’s current exhibition To Exalt the Ephemeral: Alina Szapocznikow, 1962–1972, a show that presents a thrilling selection of her sculptures across all three stories of the gallery’s Upper East Side location. French journalist Jean Marie Drot directed the documentary, which is frequently included in surveys of Szapocznikow’s work, and often cited in essays about her. In one scene, the journalist presses the artist to talk about her teen years in Auschwitz and Bergen-Belsen. She demurs with a smile, explaining she doesn’t speak about that publicly. Alina, he beseeches. She hugs her little dog and looks away from the camera. Drot keeps hunting for her suffering, but her silence on the matter remains iron-clad.

Other critics, art historians, and curators have been similarly intent on sniffing out brutal truths, elaborating a hermeneutic of pain that has come to stand in for Szapocznikow’s art. She could not give voice to her trauma, but it’s embodied in her work, many have insisted, from early champion Pierre Restany’s writings declaring her passion for life and her art’s eroticism as intrinsically bound to her misfortune, to feminist art historian Griselda Pollock’s 2011 essay on Szapocznikow’s art as an encounter with trauma, to the framing provided by the curators who spoke at the press preview for this very exhibition. Despite this contextualization, though, To Exalt the Ephemeral could occasion a chance to see the art anew. This is the largest solo presentation in the US of Szapocznikow’s works since her retrospective Sculpture Undone came to New York’s Museum of Modern Art in 2012–13, and is the latest instance of a decade-long resuscitation of Szapocznikow’s career that has included some crucial art-historical work, like the digitization of her archives and the release of a number of monographic volumes in English, often produced by the Polish academics who have championed the artist all along. Thanks to these efforts, the time is now ripe to sharpen our focus, to separate close looking from mythology. 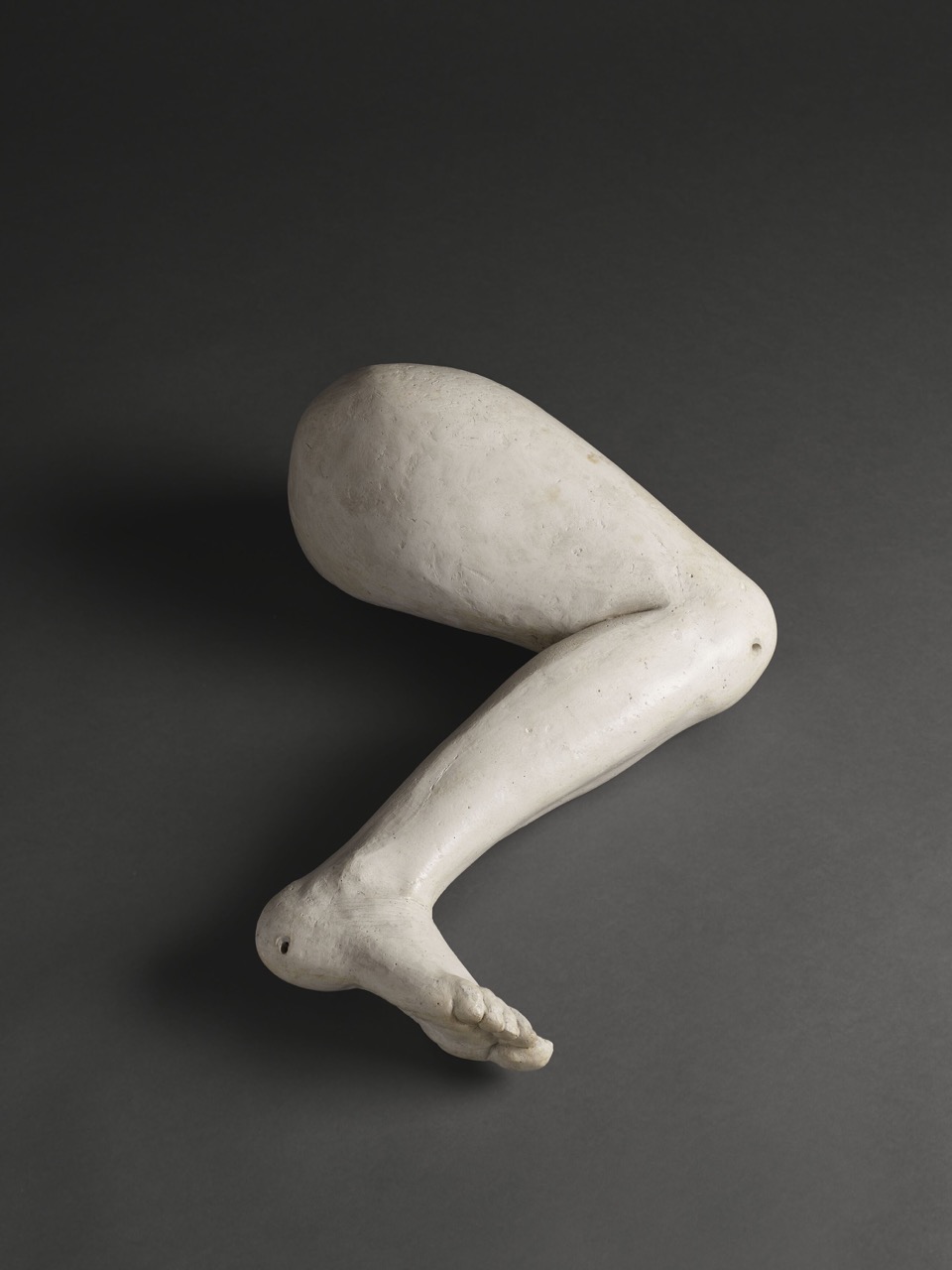 Though To Exalt the Ephemeral is not organized chronologically, the show begins by presenting three of its earliest works, like a legend for what is to follow. Leg (1962) is a plaster cast of Szapocznikow’s titular body part, lying on its side and bent at the knee: this was the first cast of hundreds that Szapocznikow would go on to make from her own body. Next, Untitled (1964–65) is an eerie fragment of the artist’s mouth and chin, captured in precise, minute detail in plaster, resting precariously on a wavering stand that bears the traces of her fingertips. Finally, Belly (1968) was cast from the torso of a girlfriend; the human-scale plaster version on view here was just one of so many bellies fabricated by the artist. She spent the summer of ’68 in an Italian quarry chiseling two giant ones out of Carrera marble, and also wanted to mass produce thousands of them in the form of soft cushions, which she hoped to see in every home and kindergarten. 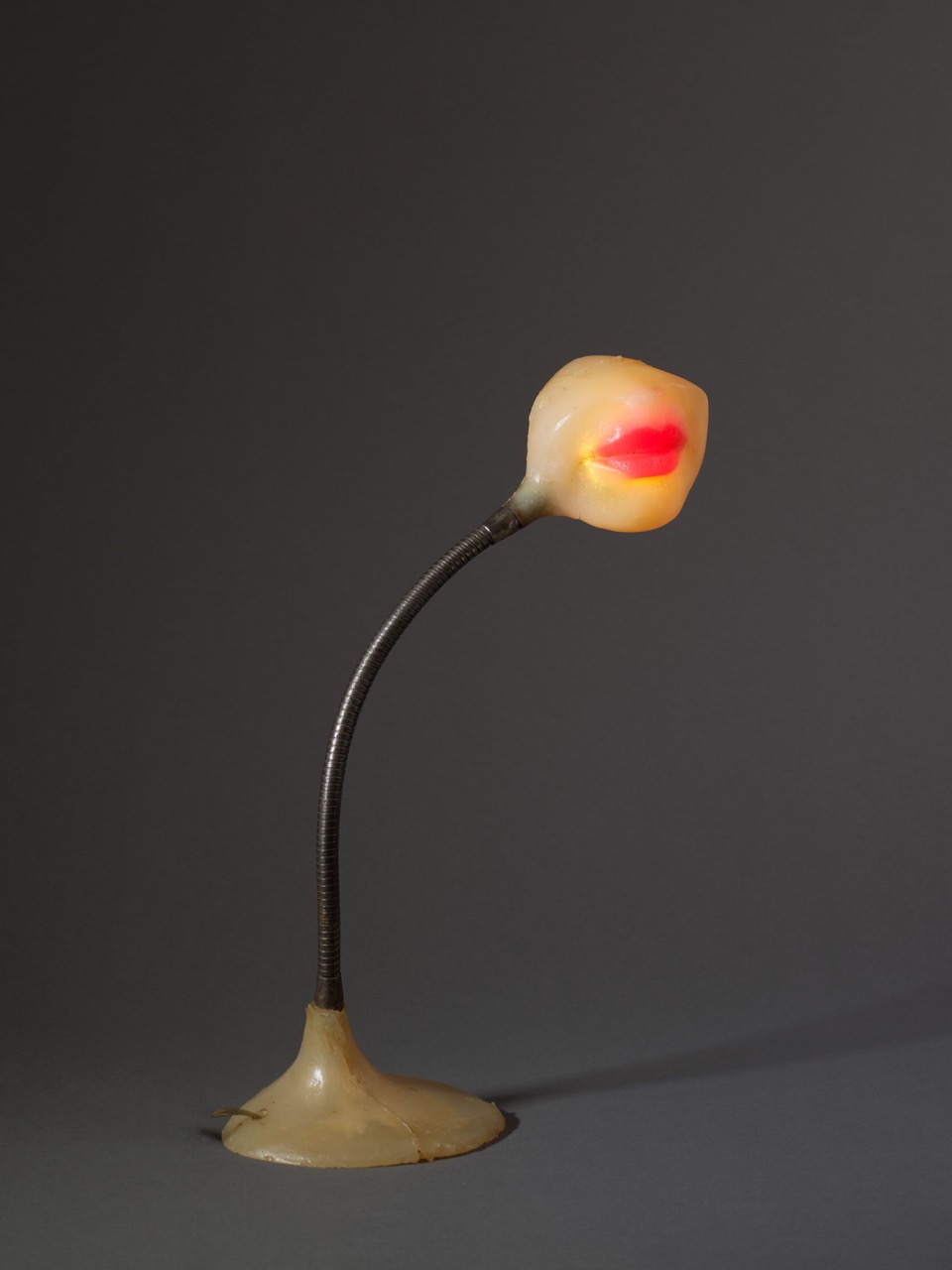 Szapocznikow’s motif of the isolated mouth, art historian Urszula Czartoryska suggested, may have been inspired by the opening credits of the 1964 James Bond flick Goldfinger (she’d also take that plaster leg from ’62 and create an updated, shiny gold version that she named after the film—Marcel Duchamp nominated it for a prestigious award). The H&W show presents a bouquet of at least a dozen more of those lips, in the form of the iconic lamps Szapocznikow made from colored polyester resin (her favored material from the mid-’60s on). These sensuous mouths (sometimes her own, sometimes those of other women) glow from within as they sprout up from elegant, swaying stalks (she also designed a series of rings adorned with these lips, intended, like the bellies, to be produced at a mass scale). At the end of this gallery is Caprice-Monster (1967), an illuminated abstract resin mass that twists itself into knobby phallic protrusions (Szapocznikow did not limit herself to the erotics of the female body—just a few years later, in 1970, she would cause a scandal in Paris by exhibiting a sculpture of a small woman languorously reclining against a giant erect penis; she paved the way for those Polish women artists who would trigger outrage for their own wielding of dicks in the ’90s and 2000s). The playful absurdity continues upstairs, with the Photosculptures (1971), a set of twenty photographs of the situational “sculptures” Szapocznikow crafted with her tongue and teeth out of a piece of chewing gum. 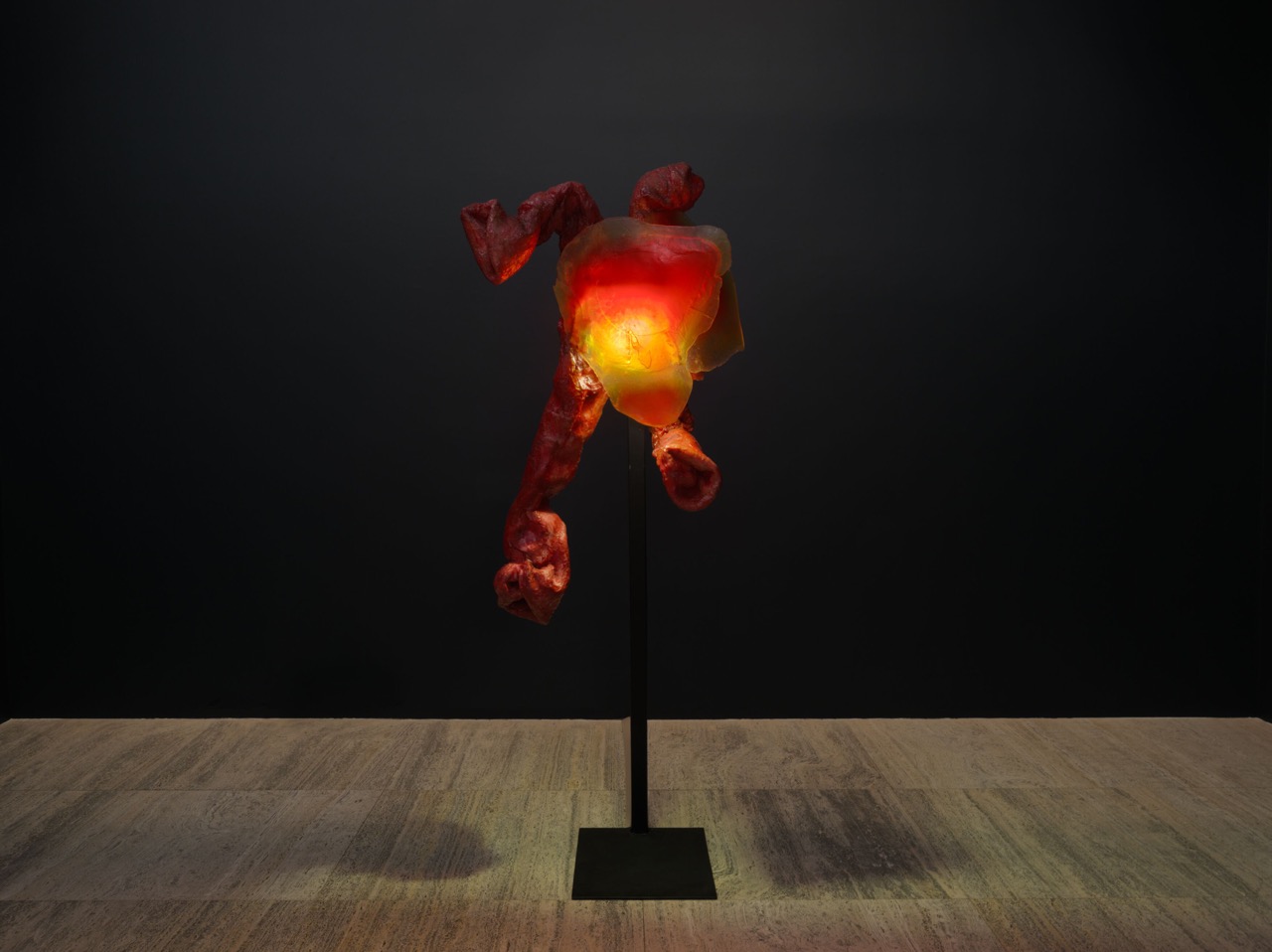 It is clear that Szapocznikow was constantly absorbing and responding to the new styles (existential surrealism, pop art, nouveau réalisme, “proto-feminism,” conceptualism) that she encountered in France and elsewhere during these years. She was thoughtfully exploring avenues opened by mass media and mass production, and rigorously interrogating the sculptural possibilities of new materials and methods of making. The whole of this body of work is more than the sum of its sometimes painful parts, then, and that remains true on the more somber third floor. Here, two 1971 examples from Szapocznikow’s Fetish series are on display, sculptures that meld breasts and lips with stockings and bits of hair-like wool, combining to form dark devotional images. The Bachelor’s Ashtray I (1972), a mold of the bottom half of the artist’s face that’s filled with cigarette butts, was also part of a series, one Szapocznikow made for her husband in the months before her death. There are also the small resin lumps of her Tumors (created around 1970, shortly after her breast cancer diagnosis), and the flayed, distorted visages, perhaps alluding to the Polish tradition of coffin portraits, from her Herbarium series (1972). Her knowledge of death is in these last works, but there is still a twisted whimsy, a vein of sexiness, a warped humor—it’s as if she were more fascinated by her own end than mournful. 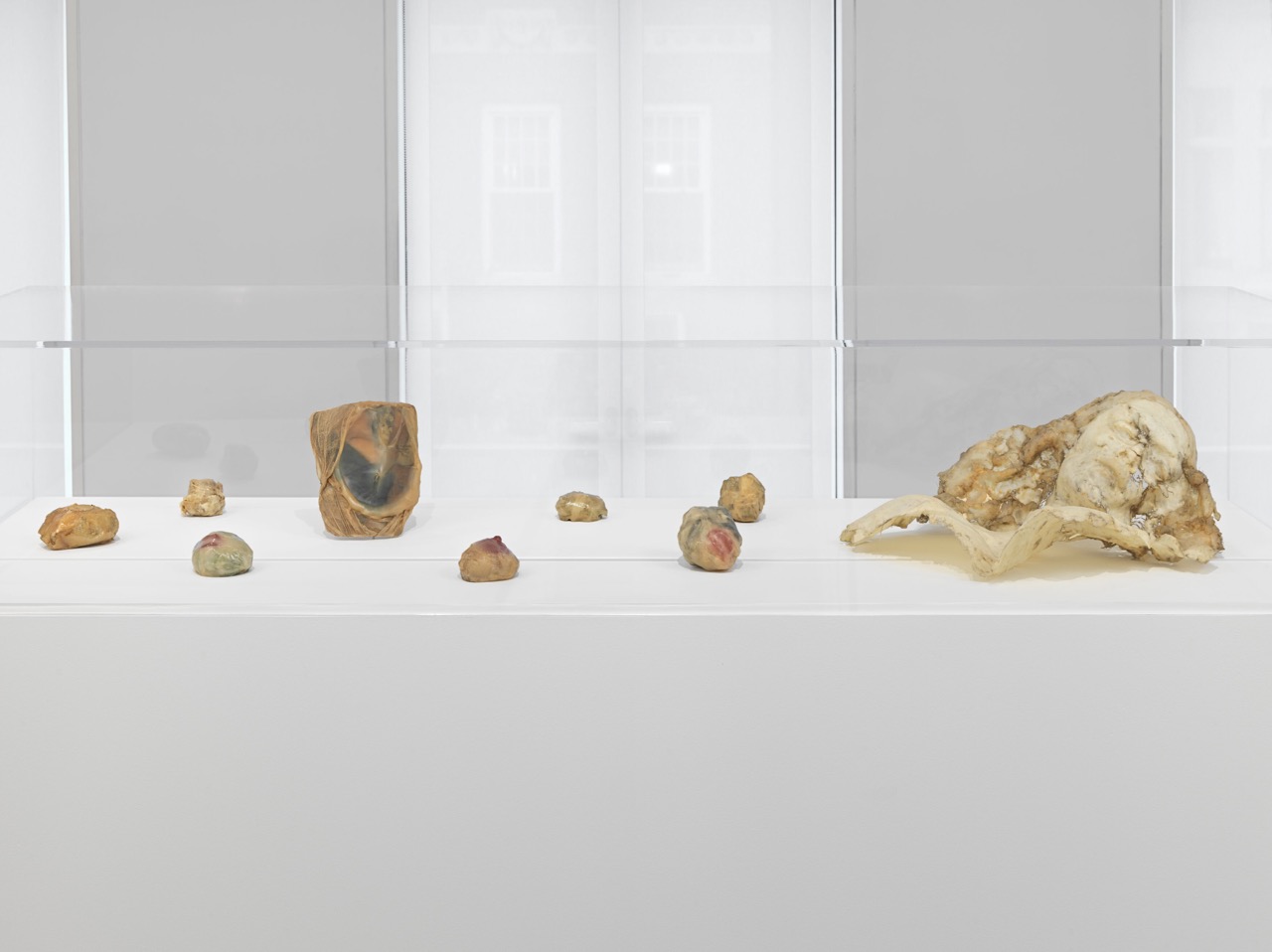 Pollock noted how critics and art historians have often defied convention and insisted on referring to Szapocznikow by her first name, Alina, as if she were a little girl. To foreground her trauma above all else is to risk a similar infantilizing, as if to suggest she were a helpless prisoner of her own personal experience. Sometimes it seems that in the hurry to bring more women into the “canon,” there’s an over-articulation of their collected harms, as if women are easier slid into history when they’re slicked up with the sheen of victimhood. Szapoczknikow’s vision was much grander and more triumphant and more hilarious than that.